Boss Palder hails from the 1976 anime “Blocker Gundan 4 Machine Blaster” or just Machine Blaster for short. The series is mostly unknown in the west aside from hard core toy collectors, but in Europe, the show was very popular.

in 2008, CM’s released the first new Machine Blaster toys in years as part of their plastic Mecha Action series line. Due to “popular demand”, CM’s has released a diecast version of one of the Machine Blaster Robots - Blocker IV Boss Palder. It looks very similar, but I am unsure if the toy used the same molds.

The box is a bit loud which is suitable for a goofy design like this. Boss Palder and the other Machine Blaster robots always looked odd to me, like low-budget copies of Go Nagai robots like Mazinger Z and Grendizer. It took me a while but I warmed up to the quaint designs. 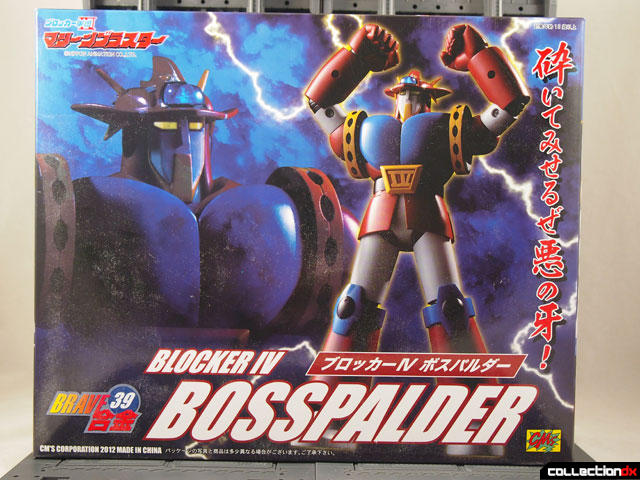 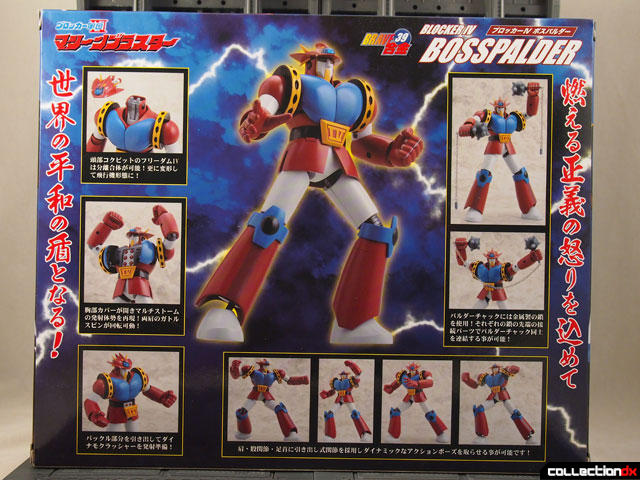 Inside is a glorious tray of environment-destroying styrofoam. CM’s knows what gokin fans want, and it’s surely not a flimsy clear plastic tray. The tray fills the whole box and the few accessories are displayed proudly within. 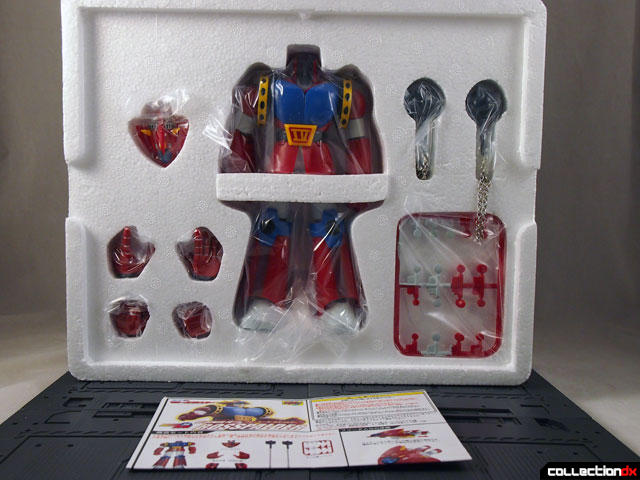 Boss Palder is heavy. I remember when Soul of Chogokin releases were like this - solid and full of metal. But as the SOC line gets more intricate and expensive, CM steps in and brings it back to basics. 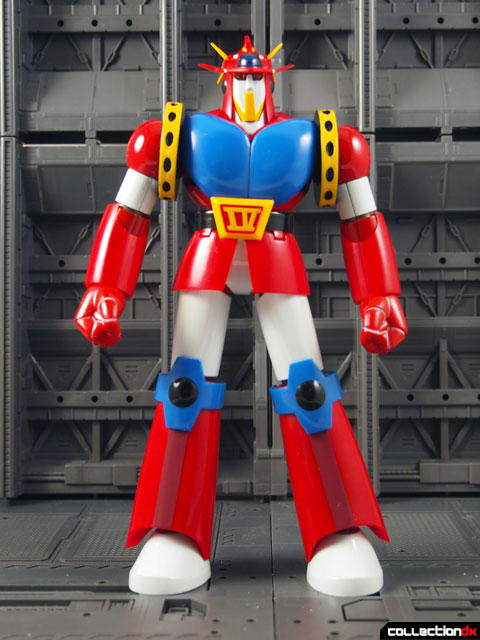 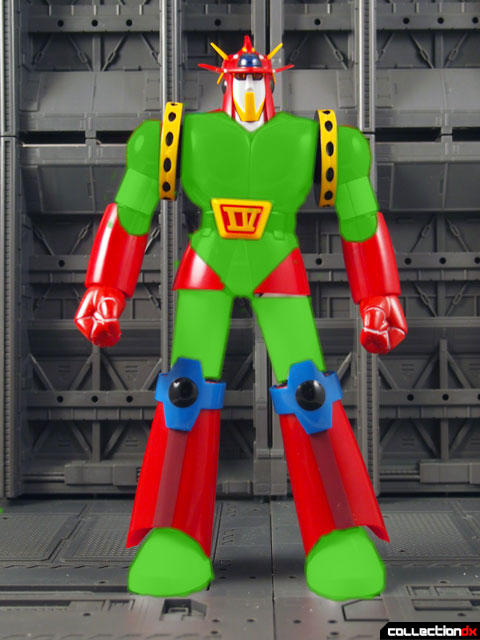 The toy is a sleek, simple robot with copious amounts of metal. It feels great in the hand. It’s very solid with nice detented joints. 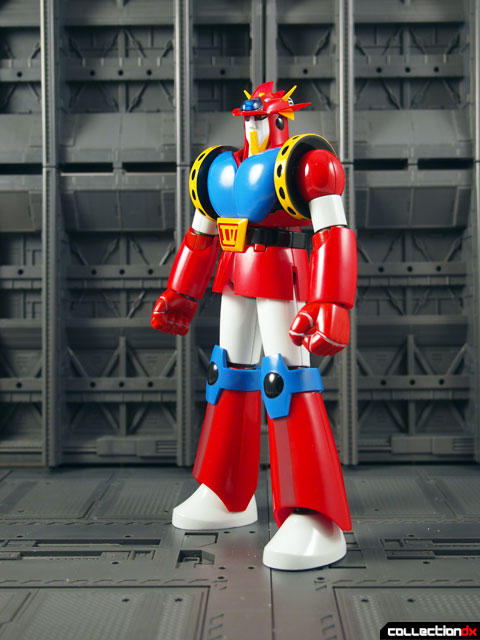 Screw-hole covers are included if you want to clean up the back - I prefer my screw holes exposed. 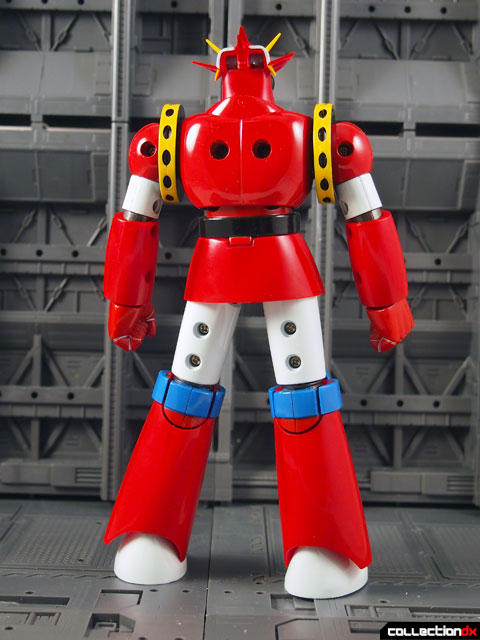 When compared to the old Takemi diecast toy you can see how far toy design has come in 30 years. While the vintage piece has funk and charm, the original updates the toy without caving into trendy re-imagination. 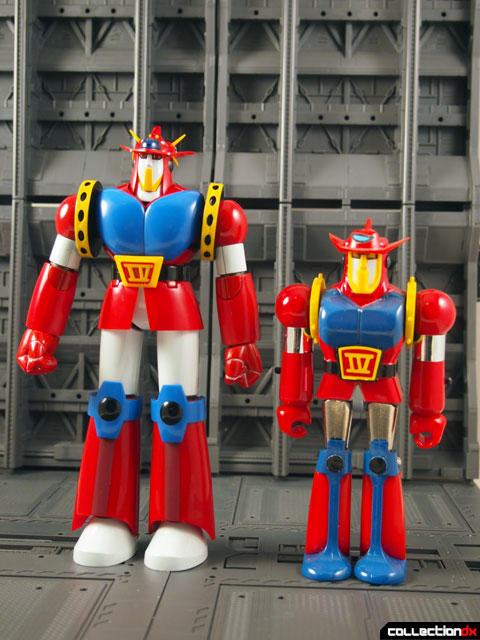 Articulation is really nice, but not overboard. the neck has a ball joint that works well with the design, the shoulders have a wide range of motion, and the elbows have simple hinge joints. 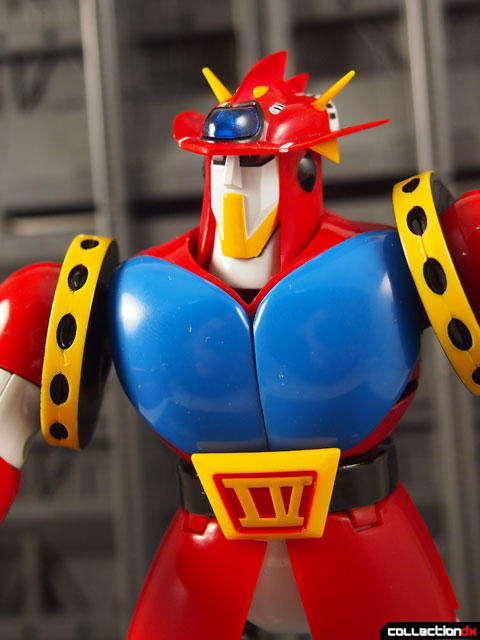 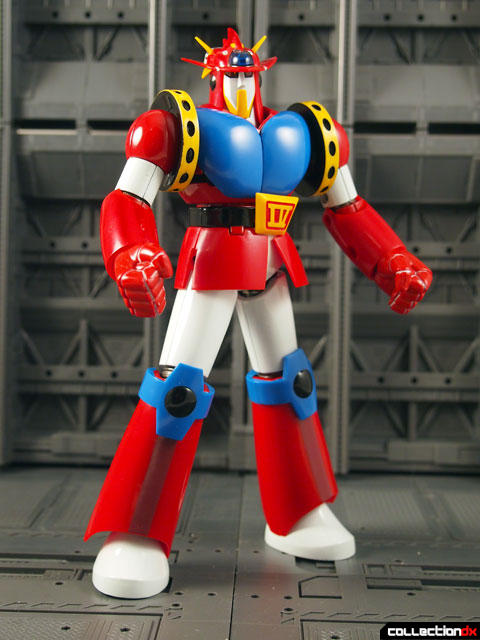 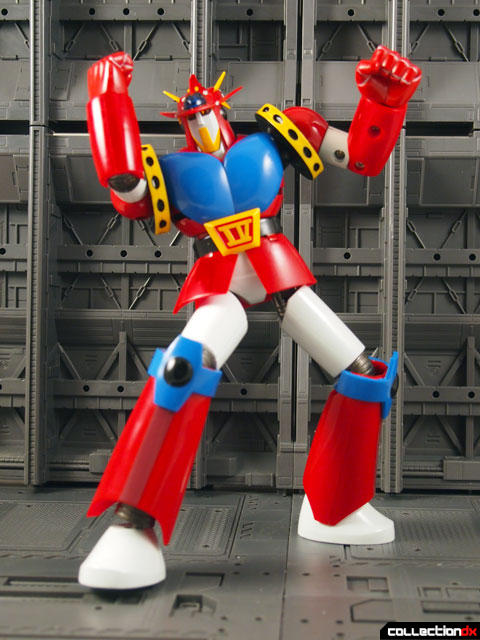 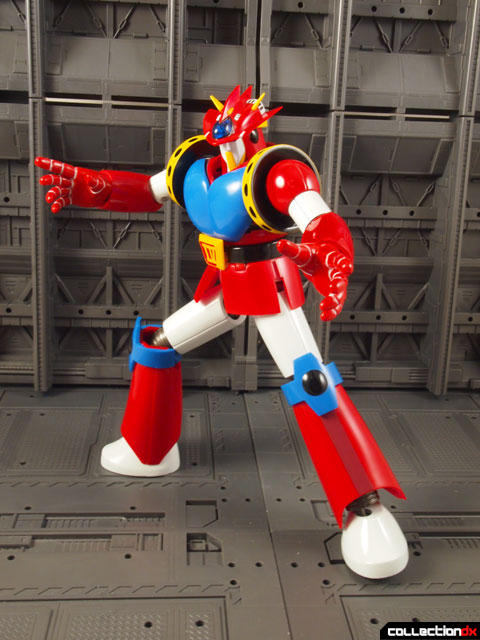 Double-Jointed elbows would have been nice but the toy does not suffer for it. Three sets of interchangeable hands are included and can be popped off the arms with a bit of force. 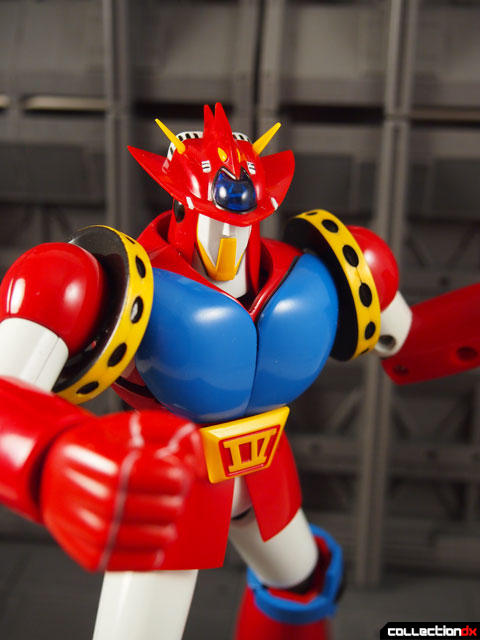 The legs have some interesting articulation. Each leg has a hip joint that can be pulled down to give it a larger range of motion. This enables the leg to go forward and back, as well as side to side, but this joint does not rotate (which is odd). With the swivel knee it manages to move out to the side as much as you would need it to. 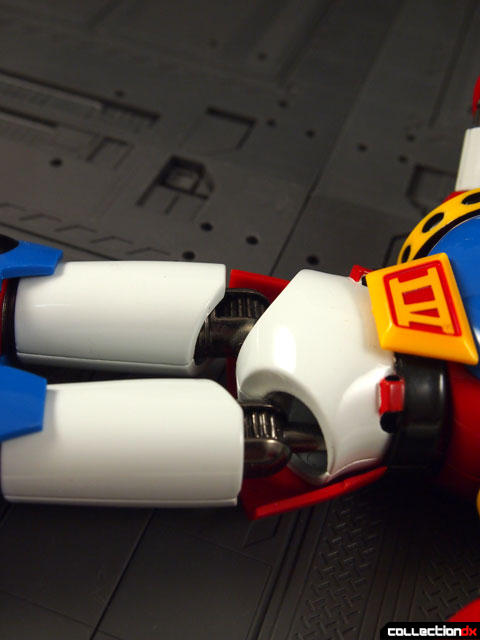 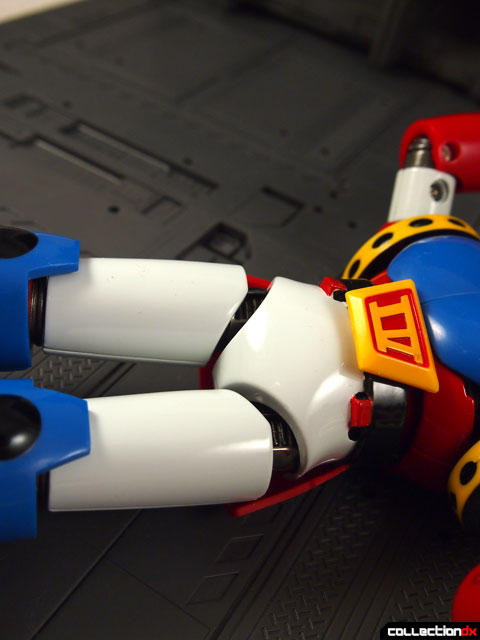 The feet also have extending ankle joints. Both the hip and ankle joints are solid, shiny metal. 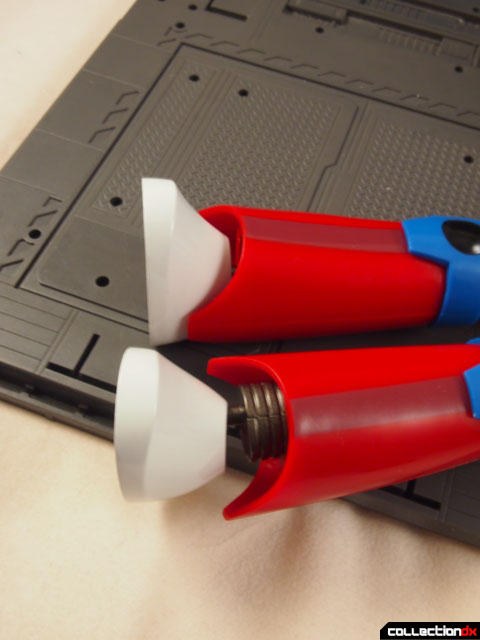 The hat on top of Boss Palder is actually a ship called Freedom IV which is piloted by Tenpei Asuka. 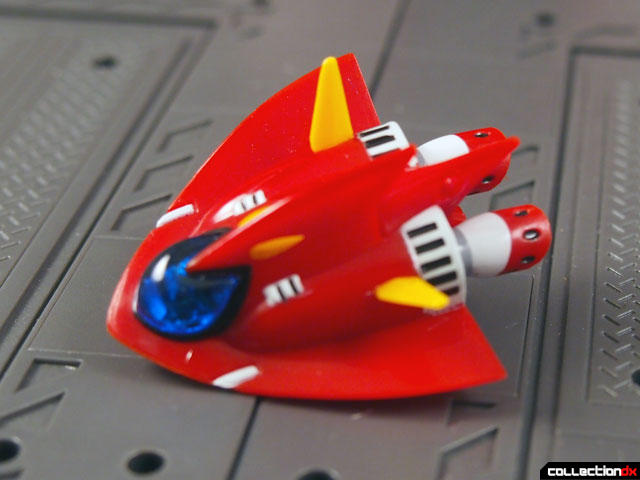 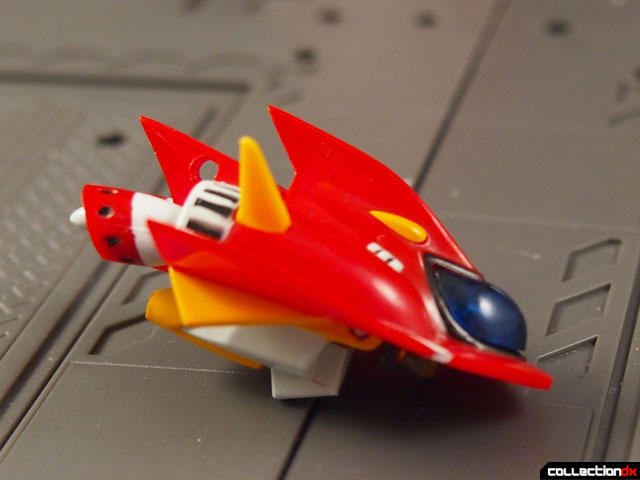 The ship docks much like the Pilder from Mazinger Z. Both the face plate and the jets are articulated and fold up when in ship mode. Take care not to put too much force on the yellow wings as they are only held in place with a small amount of glue. 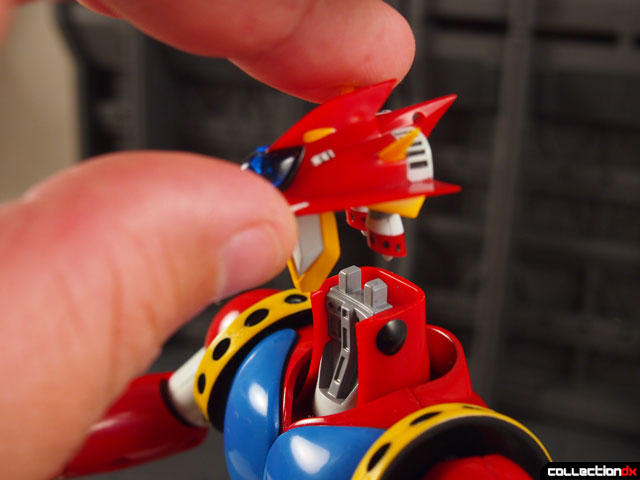 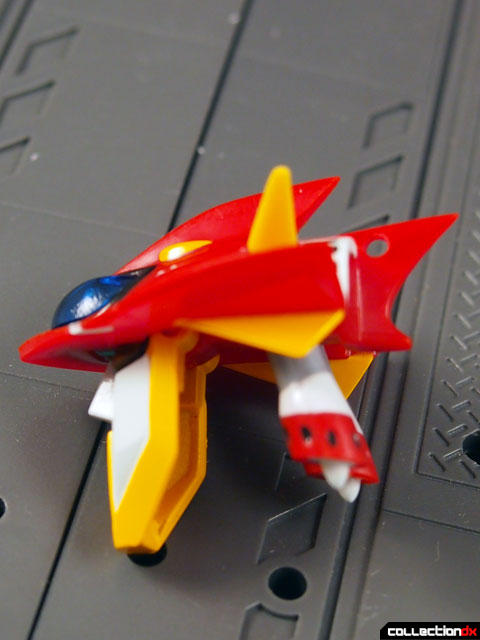 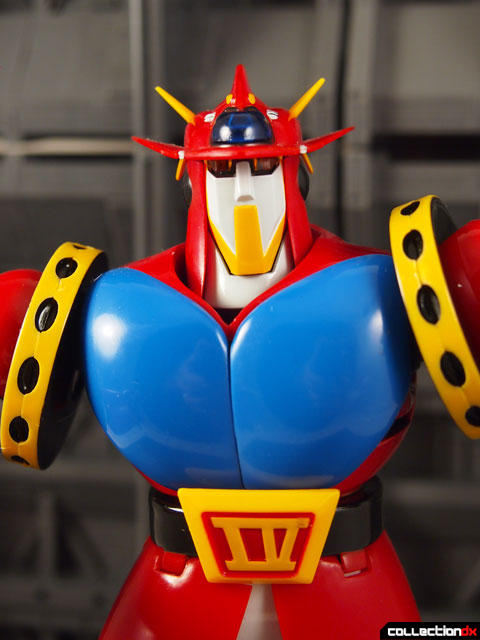 I was impressed by the detail in the neck when the Freedom IV is not docked. 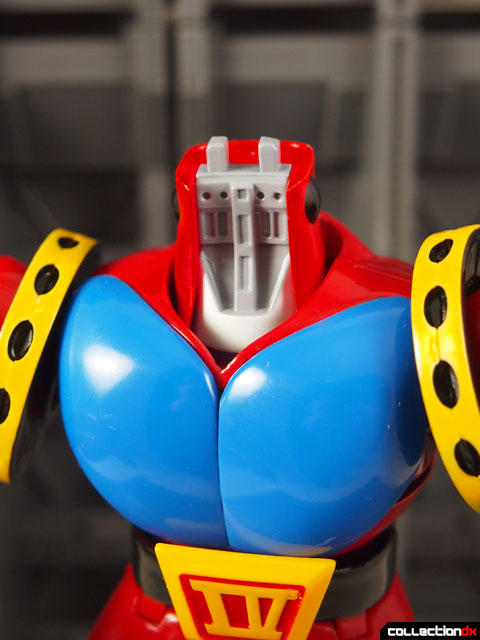 The chest plates open to reveal the Multi Storm attack. The shoulders can pull out and back to allow the panels to open and slide out. As expected, the missiles do not fire. 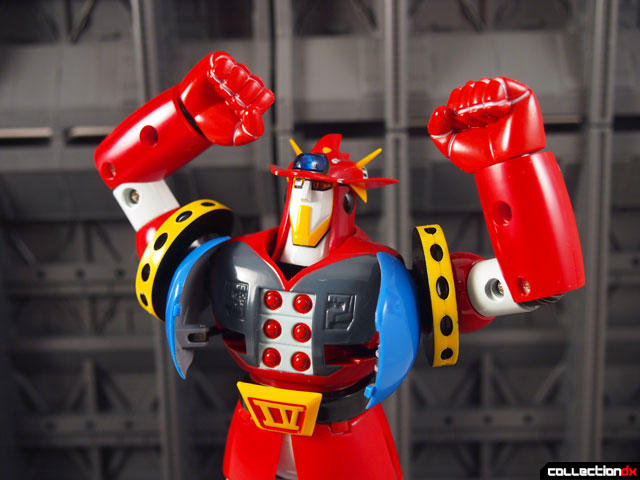 The yellow badge on the waist pulls out and down to reveal the Dynamo Crusher attack. 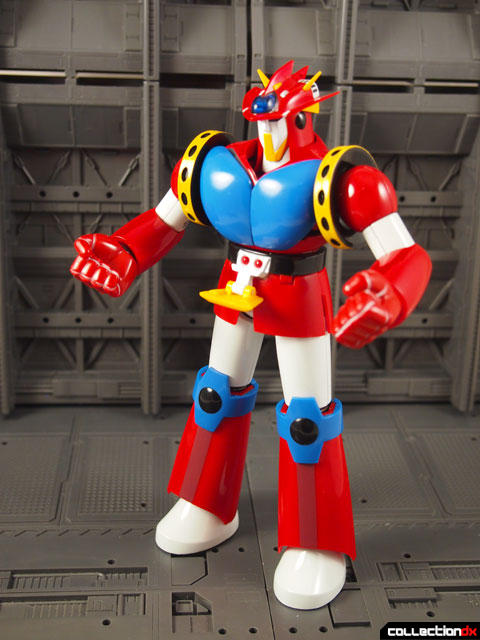 Each shoulder has a yellow disc that spins to replicate the Gaturosu Spin attack. 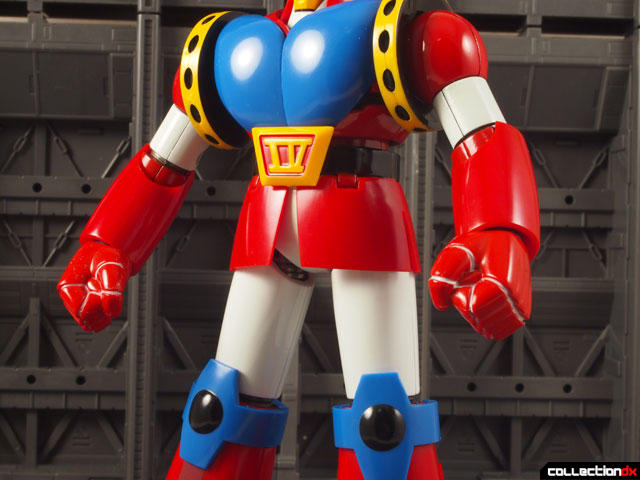 Two morningstar type weapons are included that have real metal chains dangling from them. These are called “Palder Chucks” and you can combine them to create one long weapon. 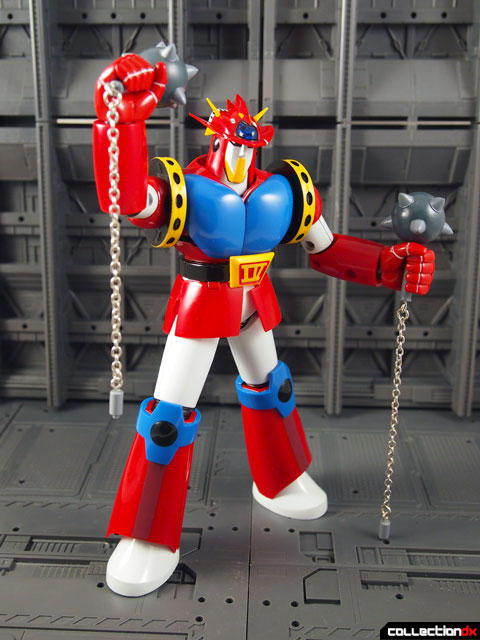 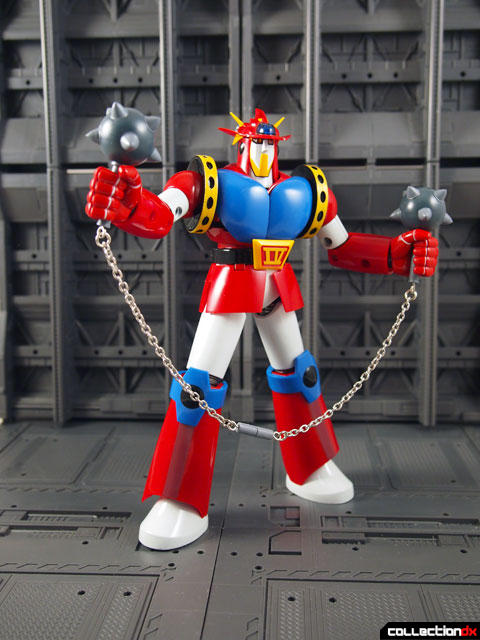 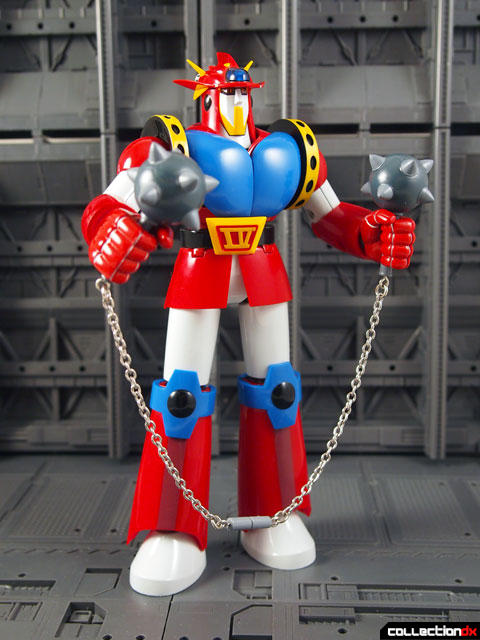 I like just about everything about this toy. It’s well made, has copious amounts of metal, and just the right amount of accessories. But it’s got two strikes against it in my book. 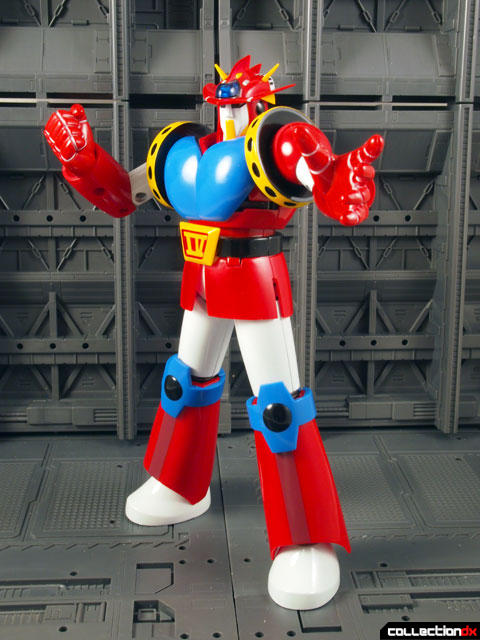 For one - I really don’t care about the Machine Blaster robots all that much. Because of this fact my enthusiasm is tempered. Had this quality of toy been made of a character I cared more about, I would have lost my mind. Fortunately the quality of the piece warrants keeping it in my collection.

Then there is the price. This retailed for 16,590 yen in 2012 - very expensive for a toy of this size and gimmicks. You have to be a big fan of either gokin of Machine Blaster to justify the purchase. But if you do decide to take the purge, rest assured you are getting a great piece.

9 comments posted
I'm guessing no since it was

I'm guessing no since it was not mentioned, but several Bosspaulders suffered from a foot that popped off too easily, I went to extend the ankle out and the foot just popped off. Even after popping it back in, it was evident that the ball did not sit well in the socket. Turns out a few people complained of this.

No problem with the feet on mine.

I bought this toy for one reason, my comic shop guy ordered it by accident. I opened it picked up this heavy-ass gokin and noticed the exceptional paint application, sold. I like this toy so much I bought TWO. This is a great toy thanks for a great review Josh, I am glad someone did it justice. I know next to nothing about Machine Blaster but this guy is so unique and so different on the shelf next to other robots he is fantastic. Sorry to gush but this is in my top 5 easy...the metal content and quality is staggering. I would buy the other 3 if they came out.

One other thing there is a plastic sheet in the midsection to prevent torso scraping it's very durable and difficult to remove but a ball joint actually connects the top and bottom halves. He pops apart very easily and you can save the sheet for re-packaging.

Thank you for the excellent review, Josh.

Here in Europe the show was very popular due to its beautiful opening theme in Italian.

Besides, the show presented us with a new idea, namely: If the evil monsters are huge, why not have a team of robots to fight against it?!

Watching the anime, this makes sense and how!

When I first saw this I thought "Cool one of those Korean robots" since it has a weird resemblance to some of the (plagarized) designs but then I saw this was from a Japanese show and I was like nevermind^^;

Anyways what's Machine Blaster like? And more inportantly, Is it a good show?

would be cool if there's one. I'm starting to like this show ^w^

Theres a very rare line of Machine Blaster figures that were released on Cards and only in Italy (Known as Astro Robot in Italy) back in the day. Guess who made them? MATTEL! Its the only instance that Ive ever heard of Mattel producing region-specific figures!

There is NO English dub of the Show. As far as I know there is only the Spanish and Italian dubs outside of Japan. I recently purchased the 8 disc Italian DVD set from ebay for $18 shipped to the US!