Attack on Titan was the runaway anime hit of 2013, despite it's odd premise. On a world that resembles medieval earth, mysterious large beings named Titans feed on what's left of the human population. The series follows the story of Eren Yeager as he joins the Survey Corps to fight against the mysterious menace.

Titans come in all shapes in sizes. Some are not much bigger than a two story building, and others are as big as a castle. Like humans, there is no limit to the variations of Titan.

Kaiyodo brings us some of the first toys from Attack on Titan in their Capsule Q gashapon line. These can be found in vending machines in Japan for about 400 yen each. You can try your luck in the vending machines and hope you get a set, or you can do what most people do is buy the set online.

There are four figures in the set, and each comes unassembled with a small catalog. 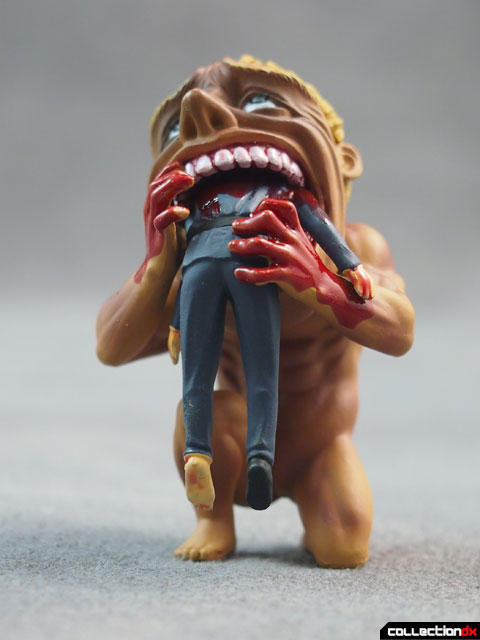 The first figure is of a random Titan eating a random human. The blood is realistic and profuse and the detail is astounding. Note how the victim is missing a shoe. 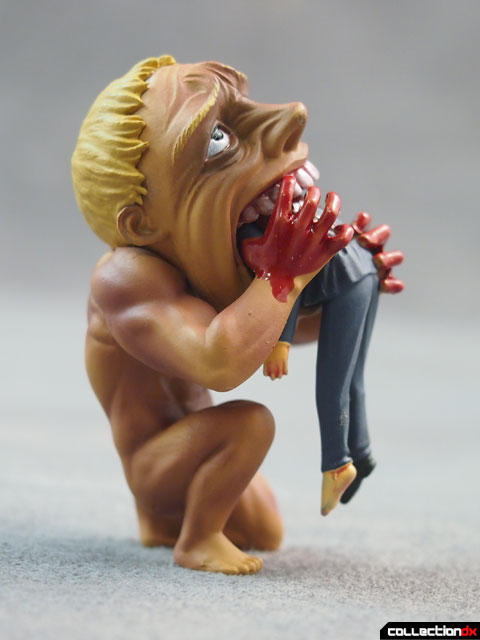 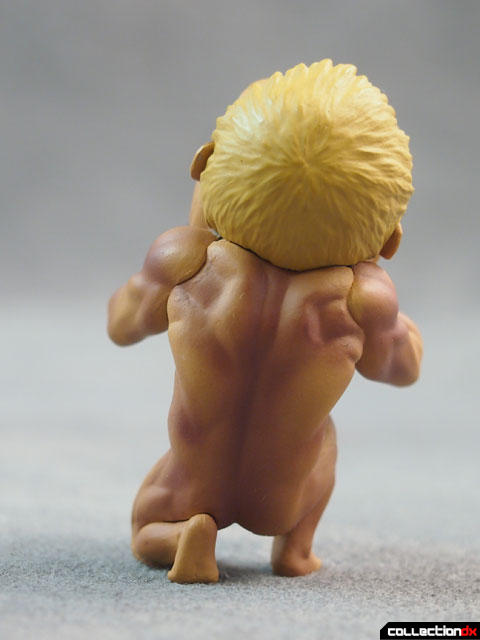 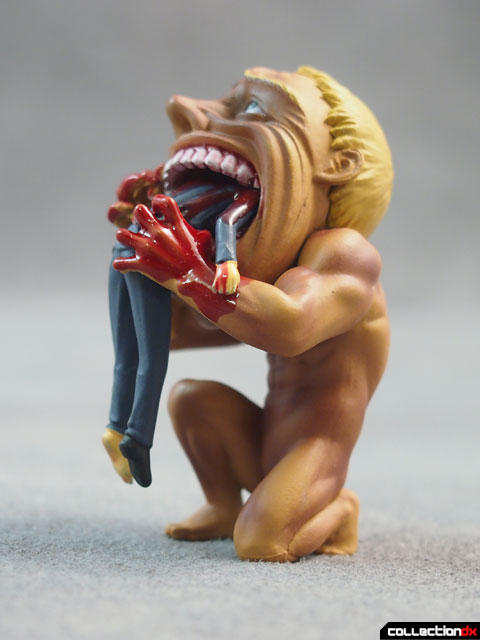 Next up is an elaborate diorama of the Colossal Titan attacking one of the walls of the city, with a member of the Survey Corps (Eren?) attacking with his maneuver gear. 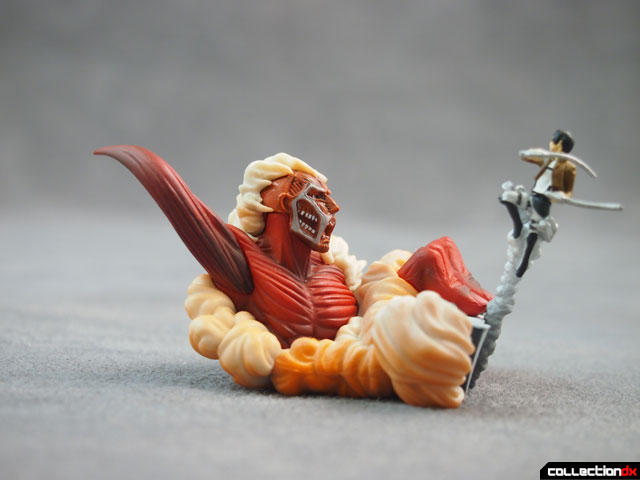 On this piece you have to attach the curved arm and the attacking human. 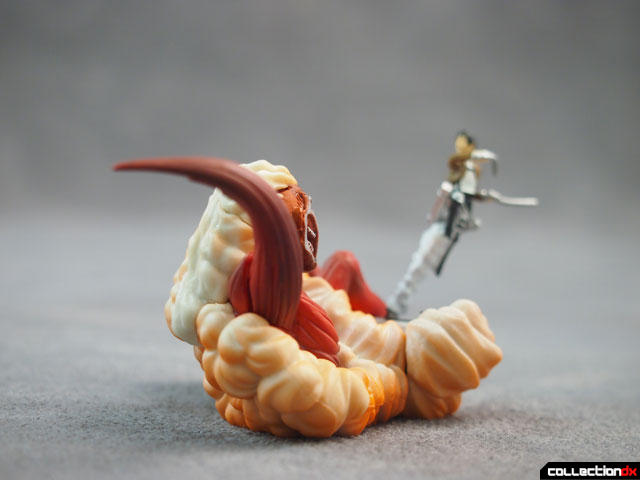 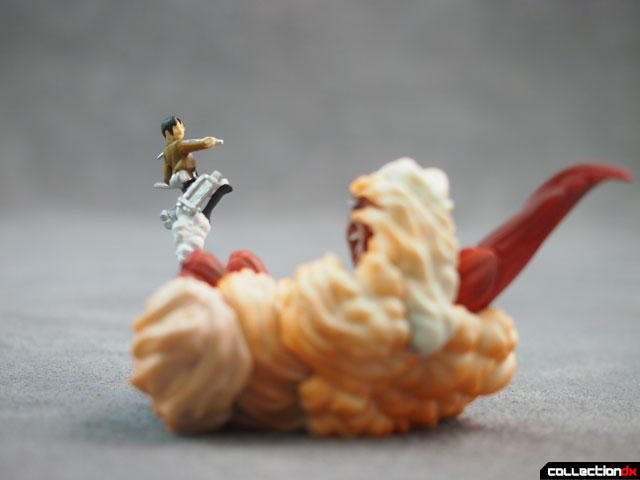 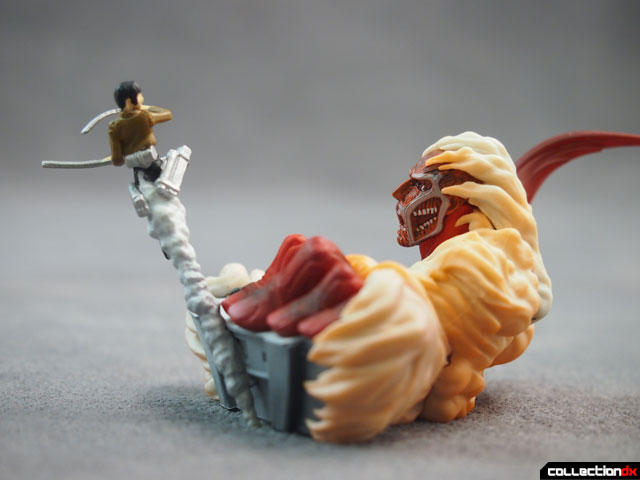 When viewed from the correct angle, the perspective is stunning. Keep in mind these are only a few inches tall. 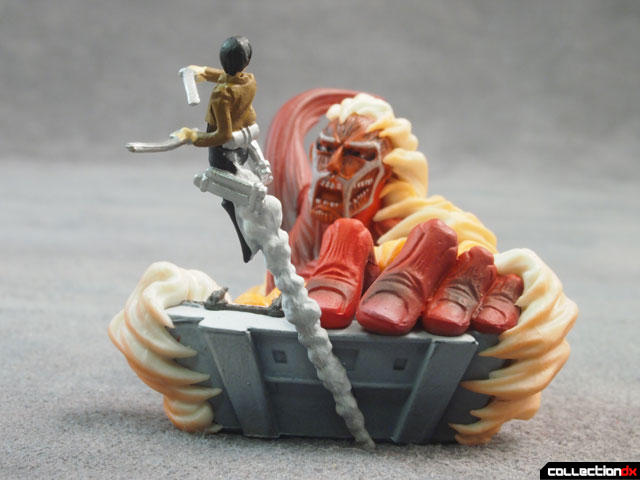 Eren's friend and fan-favorite Mikasa Ackerman gets her own piece as she dodges the grip of a Titan. 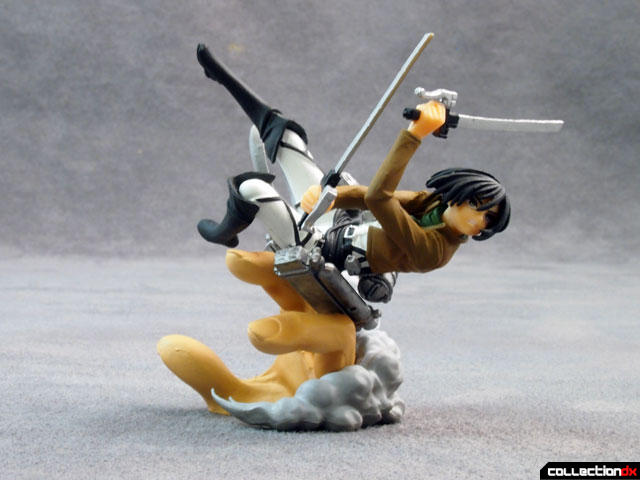 On this piece you need to attach the hands holding the swords, as well as Mikasa to the base. 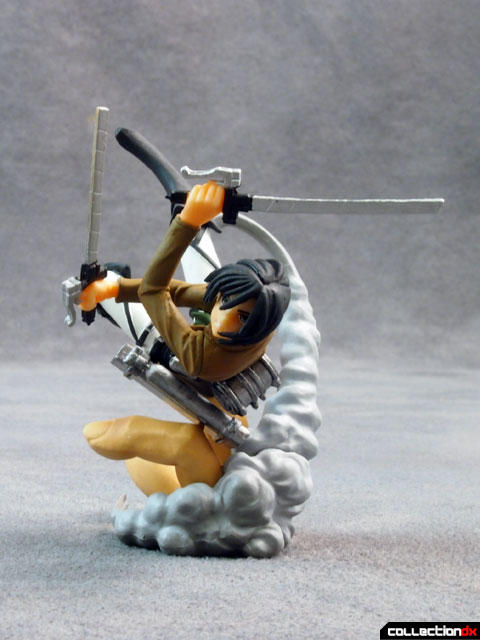 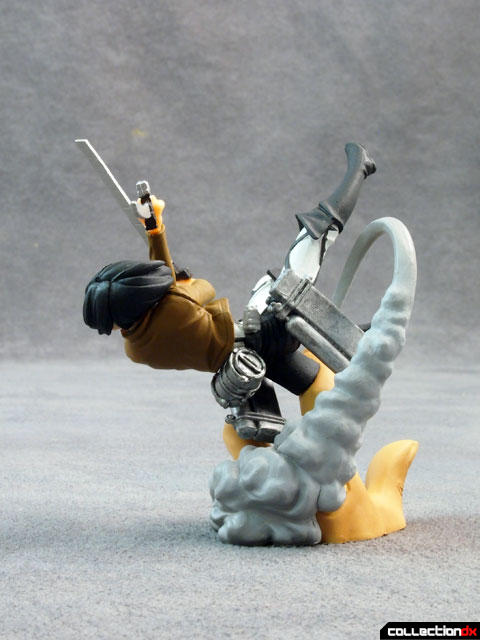 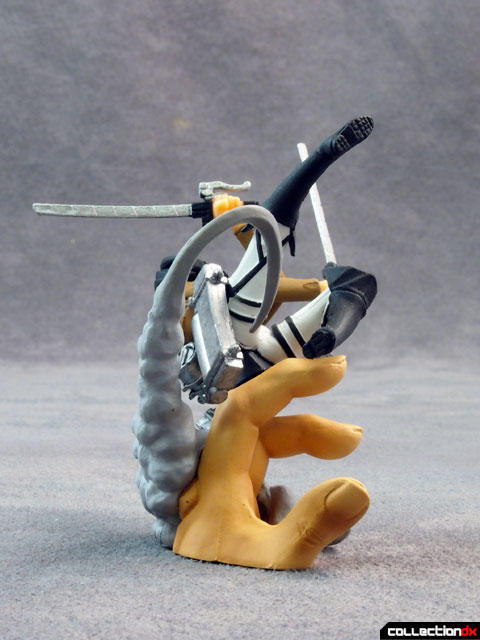 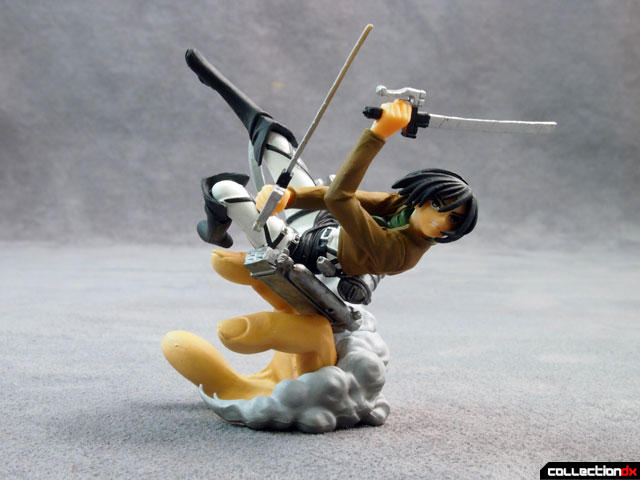 SPOILER ALERT - SPOLIERS FOR ATTACK ON TITAN BELOW

In the series we find out that Eren has the ability to become a Titan. This "Rogue Titan" is shown here attacking another, smaller Titan. 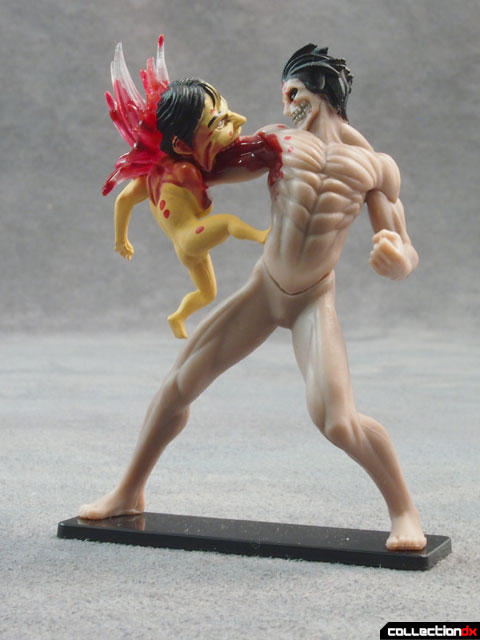 The Titan comes in two pieces with a base. It's such a wonderfully violent figure. 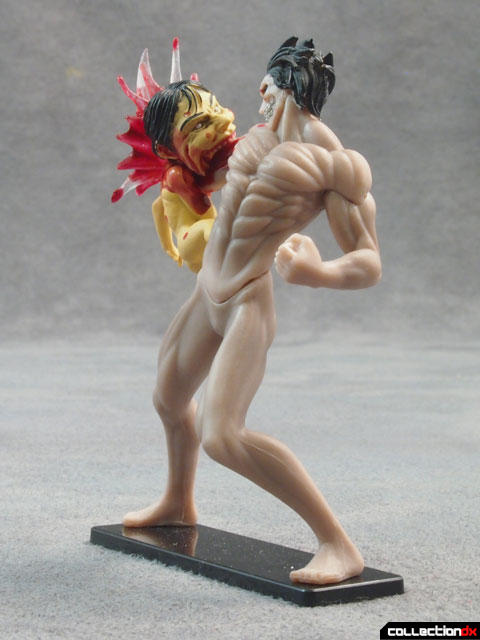 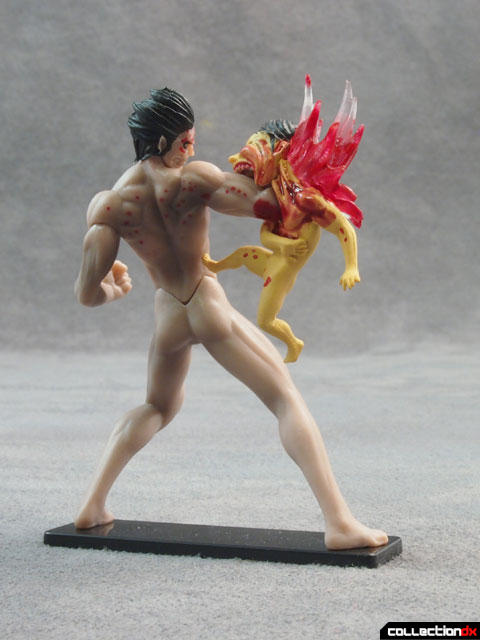 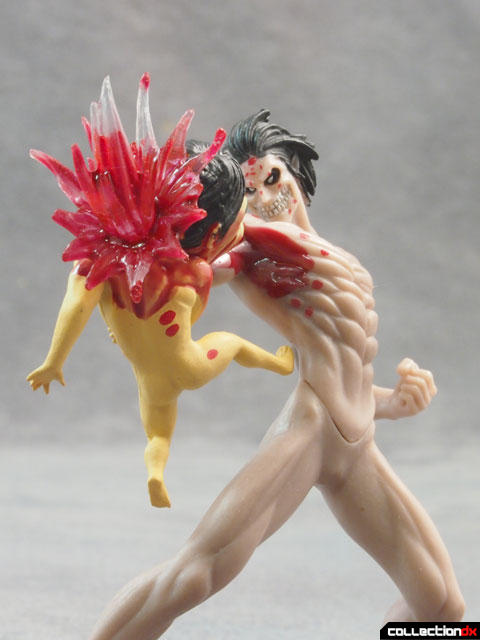 This is a small but well executed set. The sculpting is fantastic by veteran sculptor Enoki Tomohide and the price can't be beat at about $32 for the set. These will hold me over until the proper action figures are released.

I like the first figure just by itself. It reminds me of a small trinket you might see on a businessmans desk. I could see co-workers coming by to discuss something, yet they end up staring at that & forgetting what they were going to talk about lol.

I hate sounding like a nubcake but....is there a figma of Sasha? :D