One of the most visceral experiences with Japanese robot toys (Macross toys especially) is getting the chance to play dress up! The concept of a extra snap-on weapons and armor is as old as the medium and can be traced back to the famous Mazinger Z and his iconic Jet Scrander accessory. With the shift to more militarily styled machines, add-ons were framed as "mid service life" improvements much as they are in real life. The Valkyrie fighters of the Macross franchise embrace their combat aircraft roots with numerous underwing stores, extra fuel tanks, and plenty of additional rocket engines to add that extra blend of practicality and coolness. 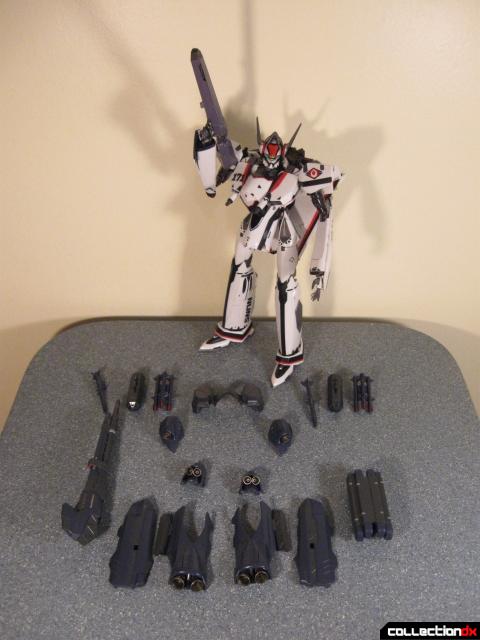 The Armored Parts set for the VF-171EX Alto Saotome Custom is another Tamashii Web Exclusive in Bandai's Macross Frontier line. More so than either the VF-25 Renewal version Super and Armor parts sets, the VF-171EX accessories are the hardest to justify not including with the base toy. The box they come in is small with only a single plastic tray carrying all the bits. To add insult to your wallet's injury, Alto's VF-171EX was never seen without its armor so you aren't even getting the full on screen appearance with just the base toy. 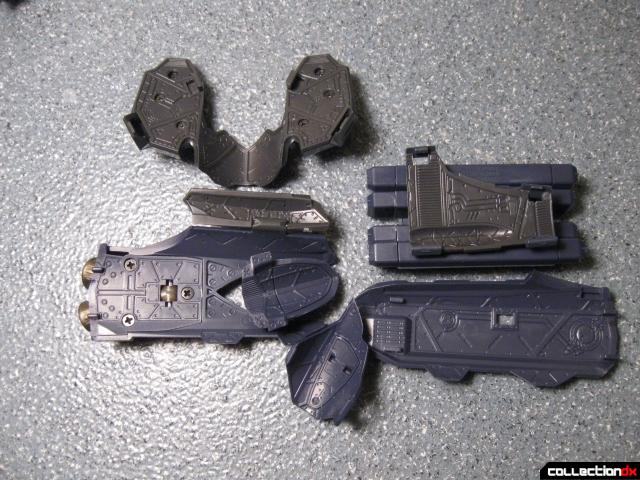 Despite the sparseness of the set, the individual Armored Parts are nicely detailed on both their fronts and underneath. The parts are almost entirely plastic save for the screws that hold them together. 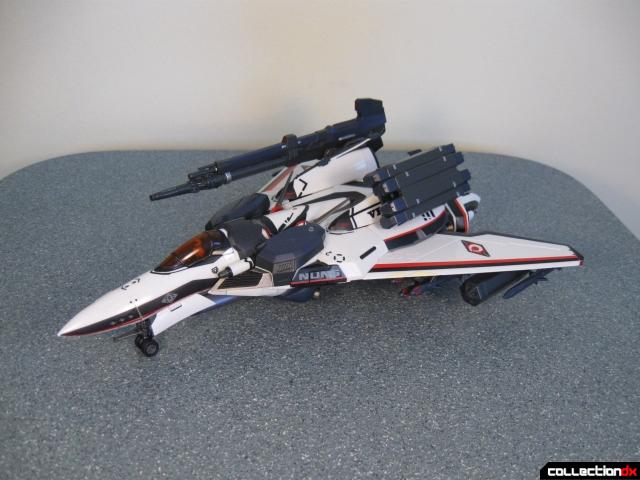 The installation process is pretty straightforward. All the major parts are attached with either small tabs or clips. The chest plate smoothly slides onto princess Alto's mechanical bosom like a magical bra. In contrast, attaching the arm armor consists of hooking on a pair of clips to the top of the forearm and then bringing the remaining clip at the tip up and onto the top of tail fin where it will snap in place. The thigh armor softly clips into small depressions below the intake. I found that the thigh parts tend to fall of the most. The leg armor consists of three parts with the largest two tabbing into slots on the sides of the leg and the small ankle part getting sandwiched between the other two. On my example the middle ankle part didn't fit properly out of the box. 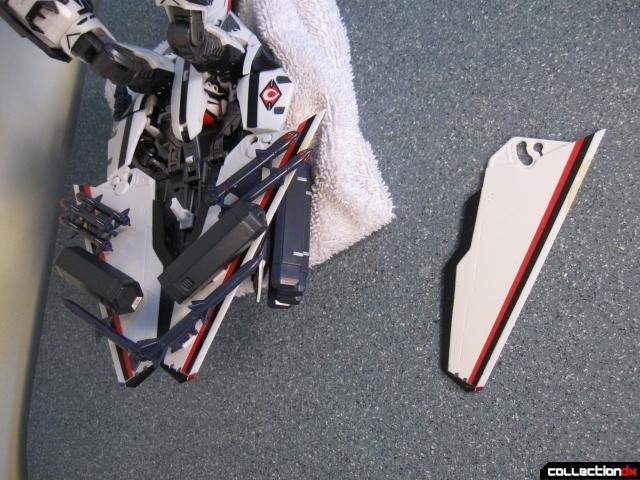 One of the more curious (and irritating) aspects of this accessory set is a pair of new wings for the base toy. With no visible hardpoints on its wings some fans were initially confused as to how they would load up the VF-171EX with its standard underwing payload. The confusion quickly subsided as the wings of their toys started falling off. In a strange throwback to the VF Hi-Metal VF-1 toys, Bandai decided the wings needed to look absolutely clean when not carrying missiles. As such the Armored Parts set comes with wings that do have hardpoints. Since hardpoints on the wings are barely noticeable anyways I can't help but wonder if this feature was just there to justify keeping the Armored Parts as a separate release.

My VF-171EX's wing do not seem to suffer from leprosy even after swapping them with the new set. You remove the wings by popping out the large white plastic cap from the track they swing on. Then push down on the small white pivot point until the whole wing pops off. Note that the large white caps have a rounded side and a flat side which line up in the hole on the VF-171EX's back. 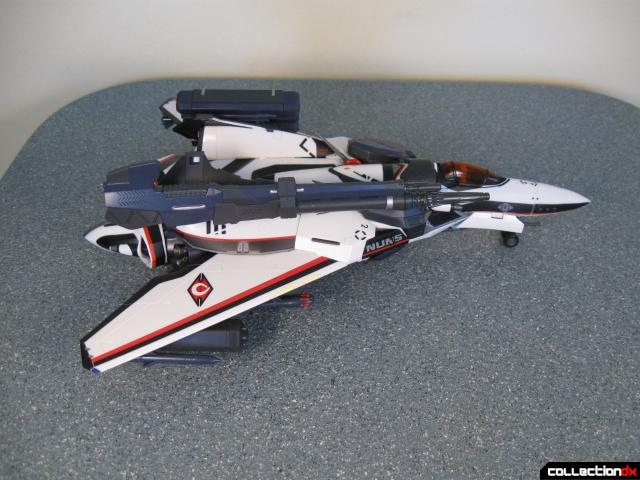 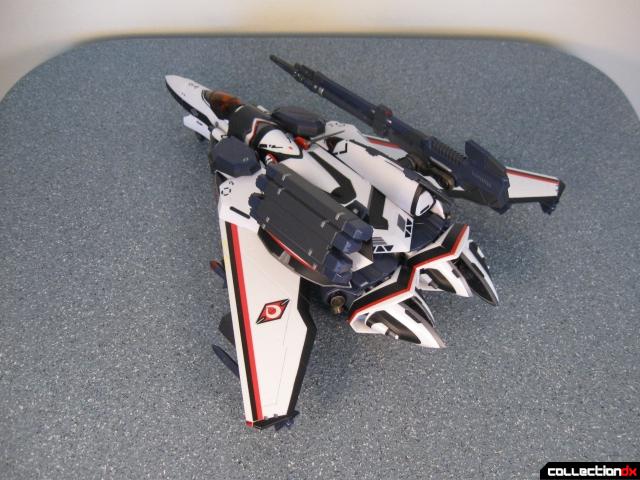 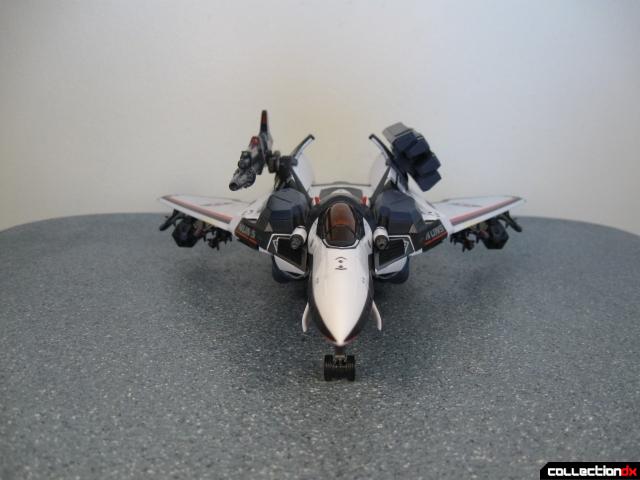 When all is said and done the VF-171EX looks appropriately beefed up with its extra equipment. The asymmetrical beam cannon and missile launcher setup harken back to the classic Strike Valkyrie. The fighter's sleek profile is pretty well maintained despite the new additions. The whole look evokes a hasty wartime upgrade. 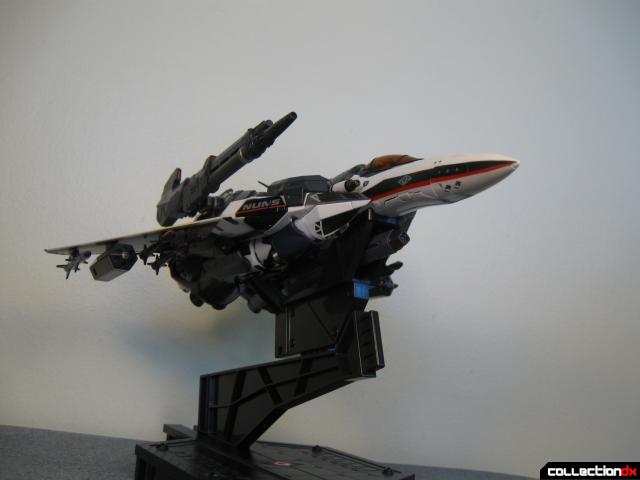 The Armored Parts set does not come with any additional stand adapters as the VF-171EX remains mostly compatible with the ones included with the base toy. 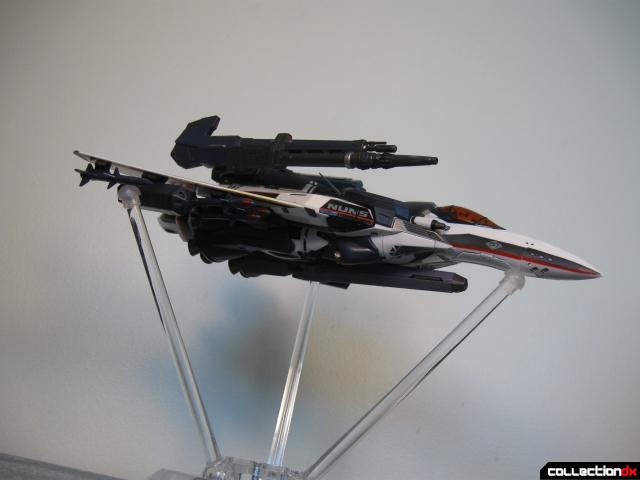 The stark white VF-171EX flies gracefully through the battle. 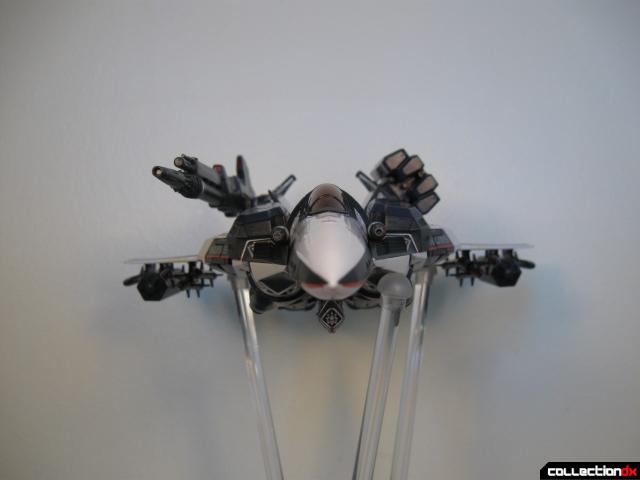 From the front I can't help but see a little bit of "The Last Starfighter's" Gunstar in the VF-171EX. 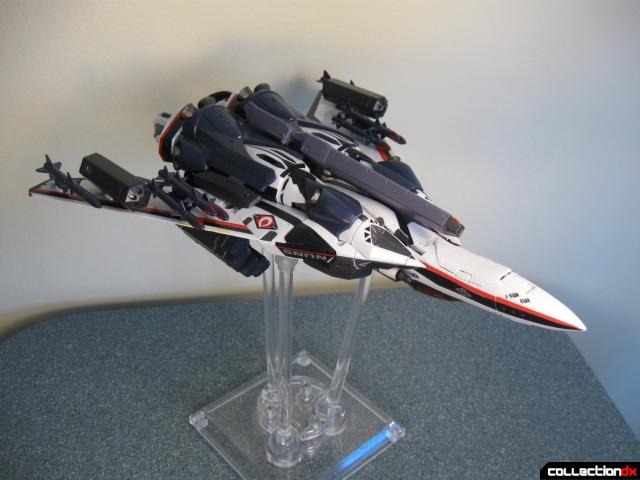 The VF-171EX can still carry its standard gun pod when fully armored. This view from below also gives me a chance to point out a trick to getting the thigh armor to cooperate with fighter mode. You need to position the toy's thighs just enough away from the center belly plate so they armor can squeeze into the thigh gap. It took me a little while to figure it out but it works easy now. 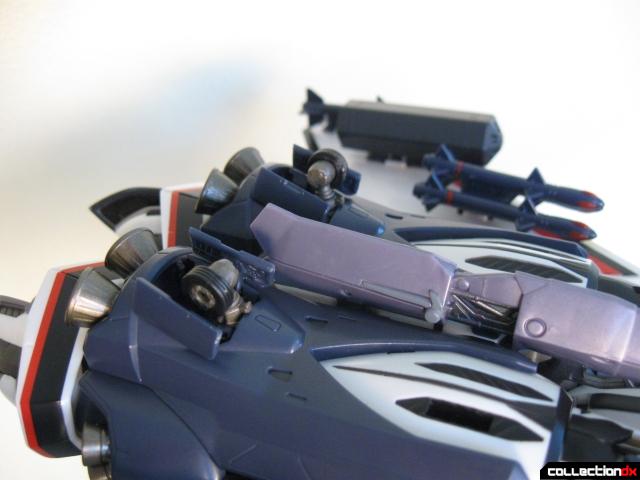 Due to how the leg armor covers the landing gear doors, the armor itself has its own tiny little wheels that pop out and rotate into position. It's a nice feature that is oddly enough the only real working gimmick for this set.

Transforming the fully armored VF-171EX is in a word: doable. You have to deal with all of the quirks of base figure in addition to having a few more things getting in the way like the underwing missiles or having the thigh armor fall off. You will probably just want to set the missiles and thigh parts aside during transformation just for convenience. Also please note that you must extend the Gerwalk joint in each leg outward as much as its can before swinging the legs down and reattaching the thigh armor. The armor pieces need that extra space between the intake and lower thighs in order to stay mounted. 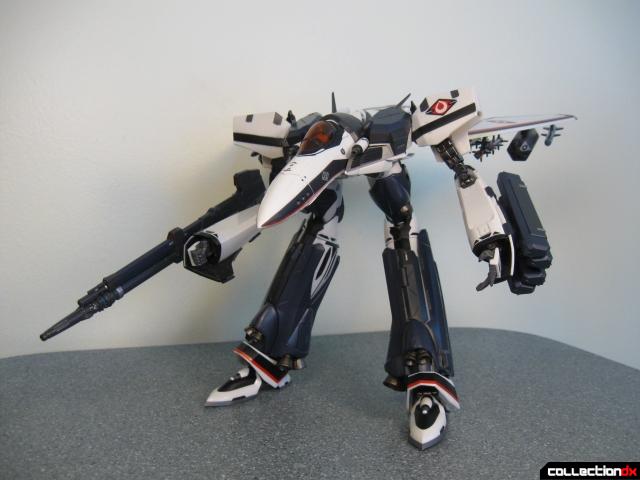 The minimalist armor does little to alter the look of the VF-171EX's characteristic lanky Gerwalk mode. It looks great and feels almost the same as the unarmored toy. My only complaint is the extra arm equipment can weigh down the elbows with no way of tightening them back up. 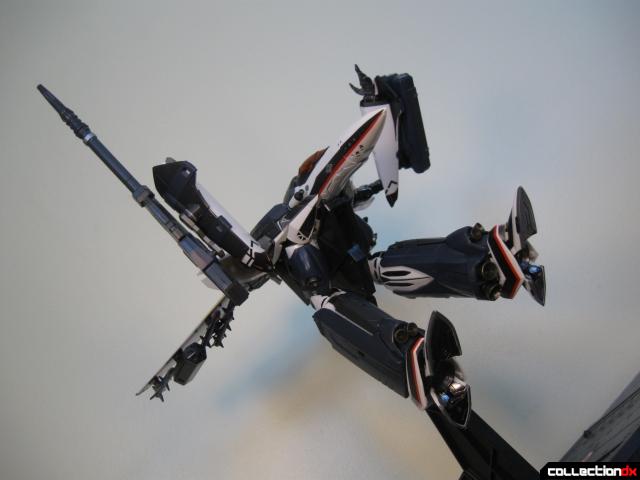 Again the default stand work with the armored figure. 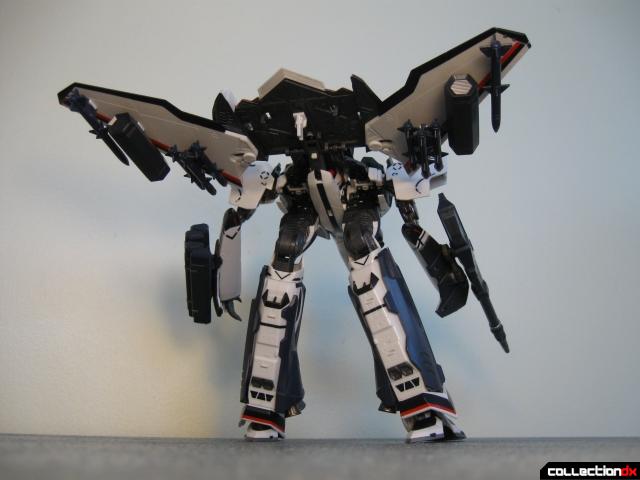 Both the improved VF-171EX and the regular VF-171's were almost always seen carrying a full payload of missiles in the show. Underwing stores really do add a sense of legitimacy to an overtechnology space plane. 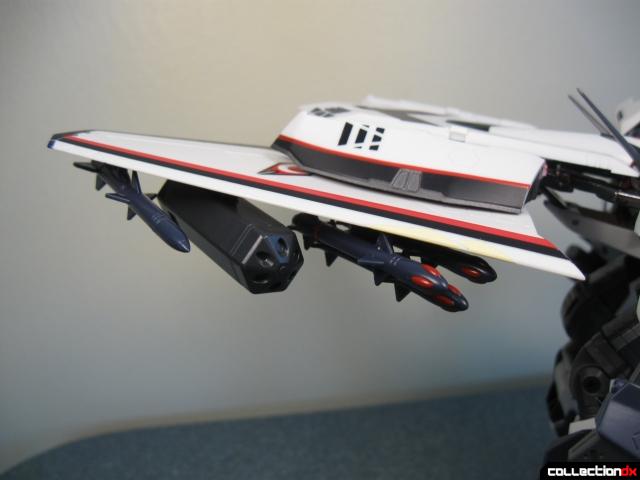 You get three pairs of underwing stores. Each can be attached to any of the hardpoints but this is the default configuration. Unlike say on a Yamato VF-1 toy, the missiles do not rotate at all on their hardpoints. 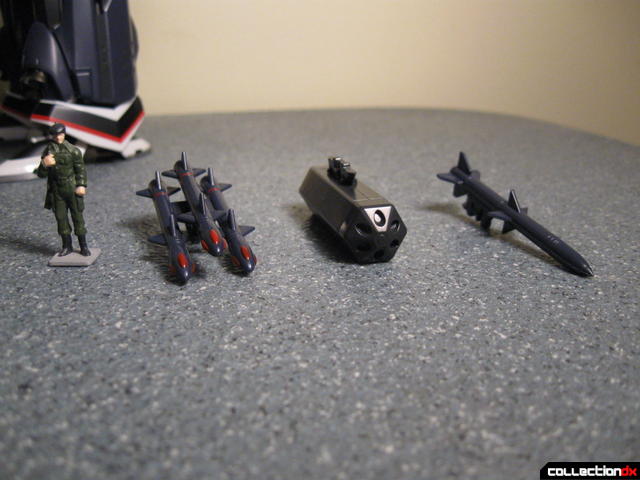 Astute Macross fans (or maybe just me) will recognize these missiles as originating in the prequel OVA Macross Zero. The missile on the right is just a modern day AIM-120 AMRAAM that was used by Shin Kudo's F-14 Tomcat while the other two missile sets were used by the fictional VF-0 Phoenix. A lot of shows produced by Satelight tend to reuse CGI models whenever possible. I cannot tell you how many times that darn helicopter from Macross Zero has shown up unannounced. Strangely the hexagon shaped missile launcher in the middle was never produced for any Macross Zero toy or model kit despite being in the series. 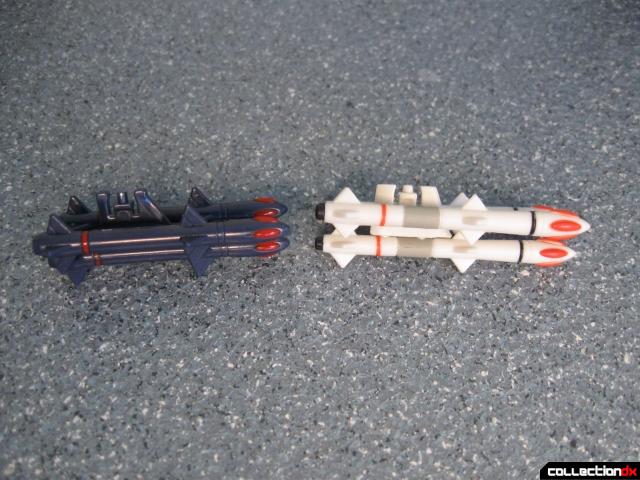 This little behind the scene quirk has created an interesting situation where the same accessory has been produced by two different companies for two different toys. The three missile cluster is roughly the same between both Bandai's VF-171EX and Yamato's VF-0 toys with there being just enough difference in the size and shape of the attachment point to make them incompatible. 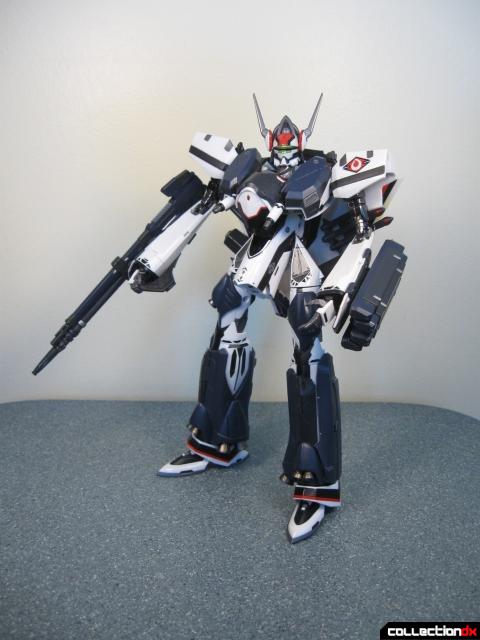 The fully armored VF-171EX looks like it stepped right out of the anime. While this Valkyrie only appeared for about two episodes, the combination of giving a grunt mecha Alto's distinctive livery and outfitting it with additional weapons and engines made many fans anxious to see it rendered in toy form. While I am glad to get the full experience, the wait time between the release of the figure itself and the Armored Parts was somewhat grating. Alto got a new dress in the Macross Frontier movies faster than his Valkyrie's toy got the accessories it had in the TV series. 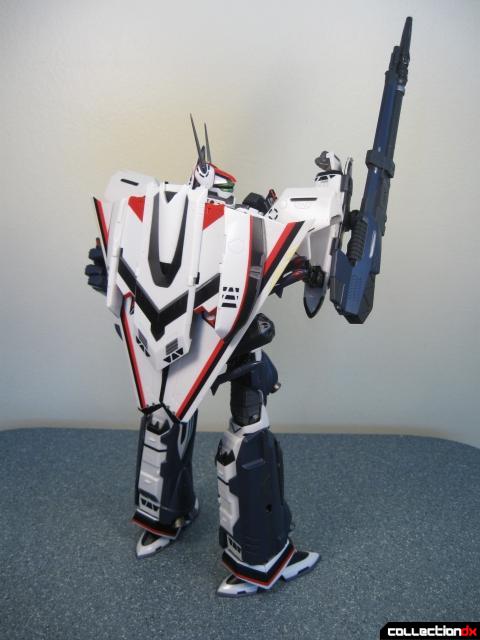 Due to how the VF-171EX transforms, most of the armor ends up on the front of the Battroid mode. It's interesting to see how CGI has helped Shoji Kawamori outfit his designs with new equipment in a way that physically works. It's a long way from back when he designed the VF-1's armor parts using stuff like foam board and card stock. 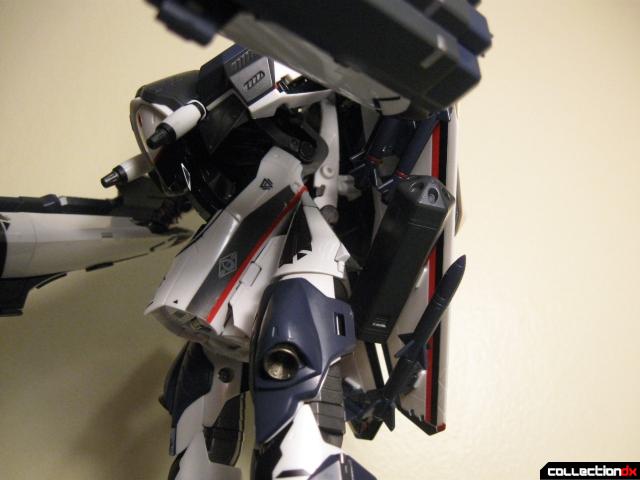 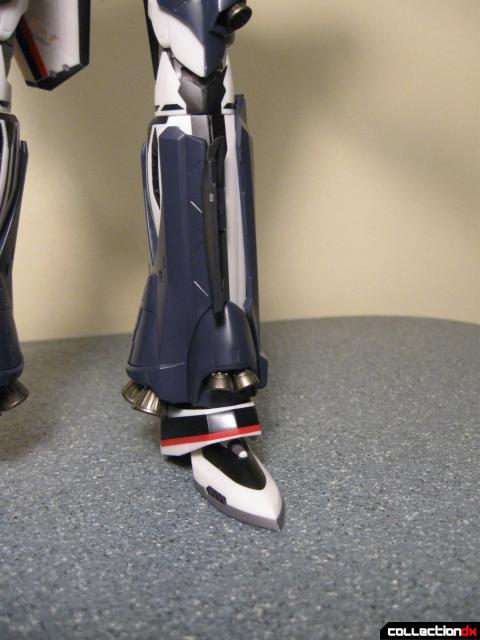 Another interesting feature is this moving flap on the leg armor that opens up to allow the wings to rest against the shins while the VF-171EX is in fighter mode. 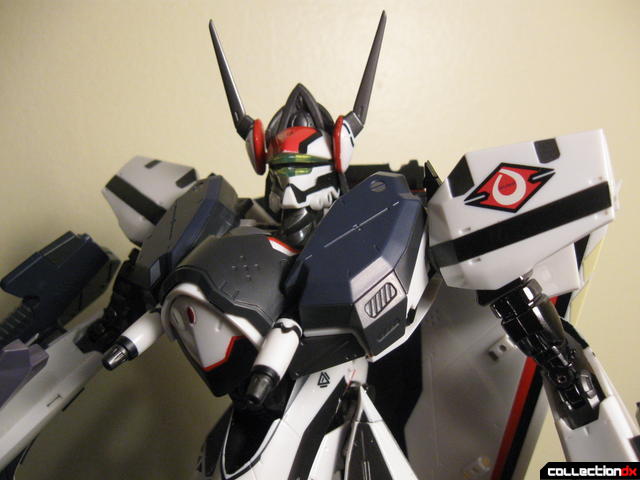 The VF-171EX's chest armor is similar in appearance to the VF-25's armor but does not have any missile launchers within. The large flathead screw looking details on the upper chest and the inset channels illustrates this is just extra armor plating. 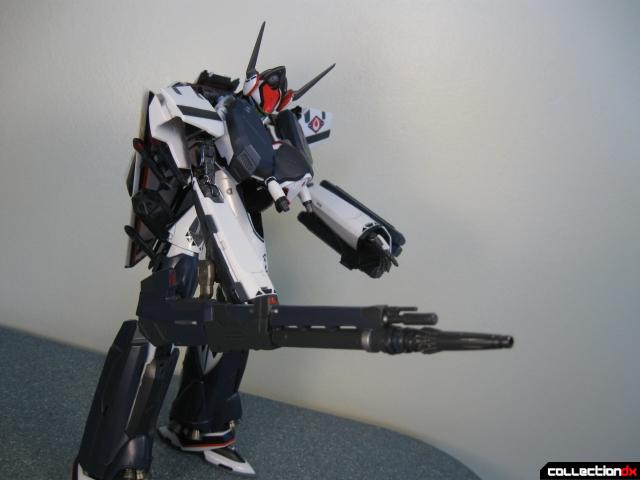 The large beam cannon on the right forearm piece caused somewhat of a stir among my friends who thought it looked so damn cool. Admittedly it is for lack of a better term a really "Kawamori-y" weapon that looks like it'd deal some major damage in an Armored Core game. It is mounted to a simple swing arm via a ball-joint and can extend outward as well as rotate around. Please note that the main swing arm for the gun does not swing above toy's forearm only below it in a 180 degree arc. 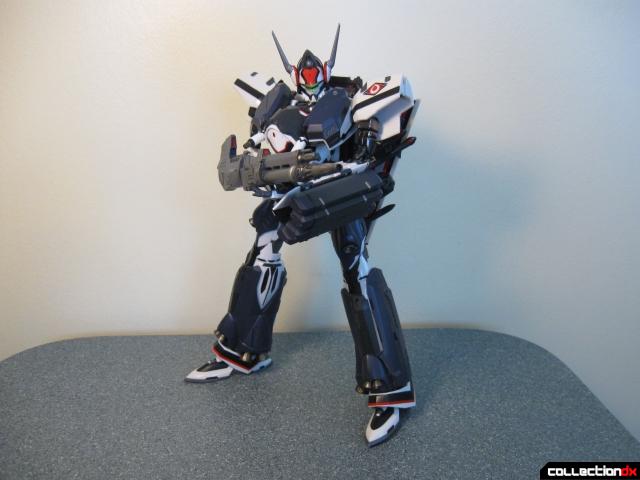 The VF-171EX can effectively two-hand its large beam cannon. 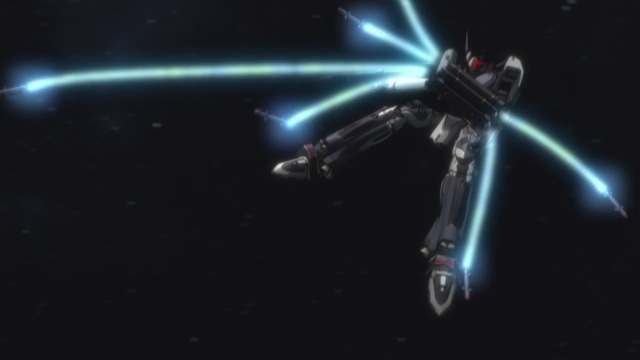 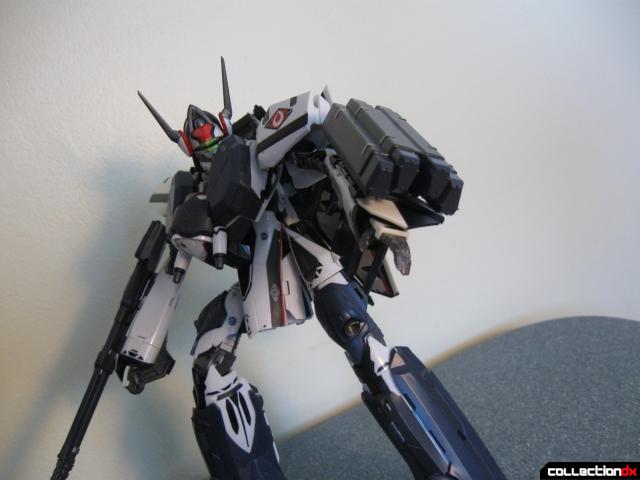 One of the strangest omissions with this accessory set is that the left arm missile launcher doesn't do anything. I distinctly recalled it firing missiles in the show so I had to check to see how it worked. Sure enough the tips of each missile tube opened up and let a spiraling projectile fly out of each end. On the toy launcher does nothing. You don't even get an optional part to display the ends of the tubes open.

In the end the Armored Parts set for Bandai's VF-171EX toy is merely competent. The set doesn't do anything particularly wrong but at the same time it doesn't do enough to justify itself as a separate release. While even the most basic VF-25 Super Parts looked and felt more substantial, the VF-171EX's skintight armor doesn't radically change the experience of owning the figure. Some of this is just due to the simplicity of the design but I would gladly have paid extra to just have both the toy and its only notable accessories in the same box. Ironically, securing the Armored Parts was far less harrowing than trying to preorder the toy itself. I received this around the same time as I got my Yamato VF-4G toy and as such didn't feel a burning need to play around with it when there was a landmark toy event sitting on the same table. I'm not sure what it means for future Bandai Macross toys when their accessories are relegated to web shop exclusives while Yamato feels comfortable enough to let similar items into the normal retail market. Getting a figure that feels truly "complete" out of the box is getting to be as much of a question of what the buyer will pay for as much as what the manufacturer will produce.