*This review will contain spoilers to Transformers Prime

I was sad to see it end last year, and even more sad that Brakedown was killed off.

In the show he was voiced by the excellent Adam Baldwin, and he reminded me of Baldwin's character from Firefly, Jayne Cobb. 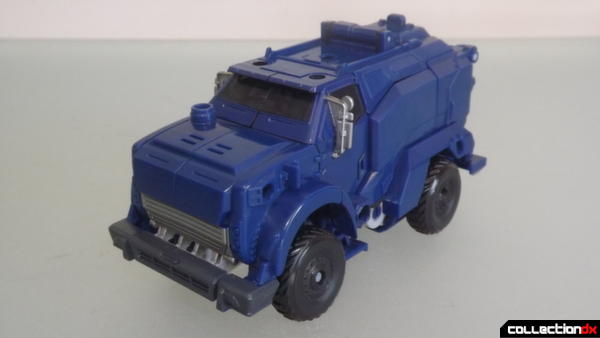 The Brakedown toy was only released in the Japan only Arms Micron line, many Transformers fans saddened that he was never brought over to be released in the main Hasbro toyline, especially considering what a good character he was and that the toy had such great design.

In vehicle mode Brakedown is a large armored truck, with a spare wheel on the back, the robot parts are well hidden, you can only see parts of the arms and legs on the underside of the truck, though the feet do stick out of the back of truck slightly. 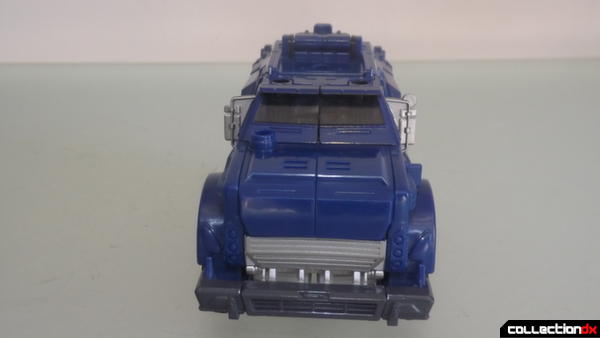 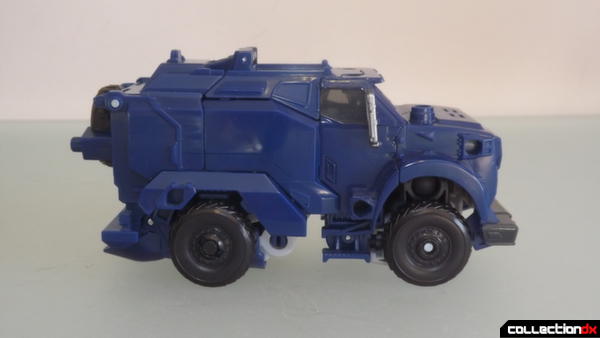 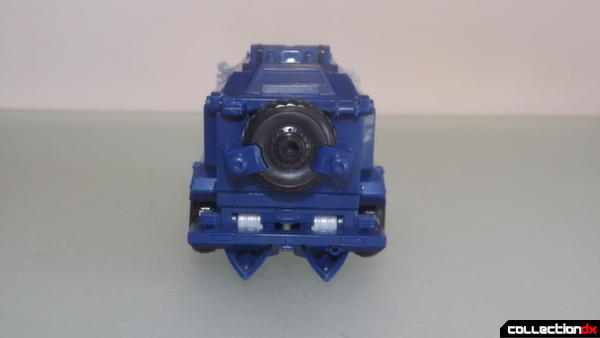 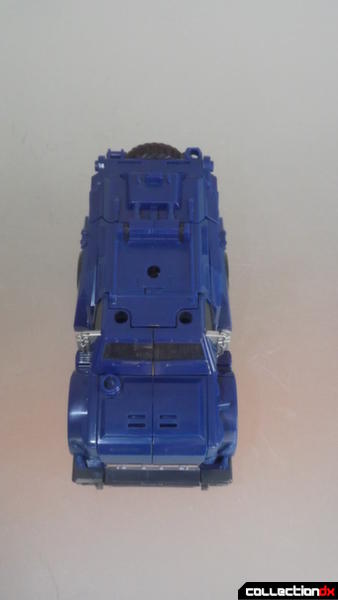 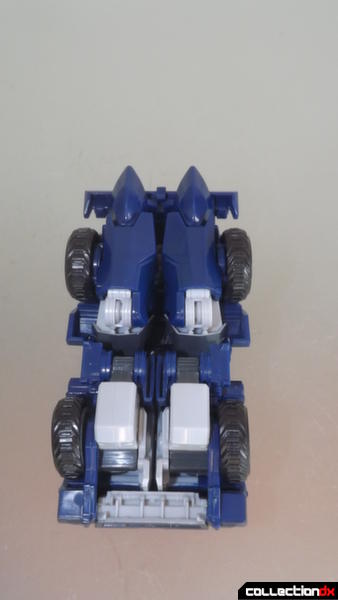 Arms Micron toys came with mini figures that transformed from animal forms to weapons for the characters, Brakedowns' Micron is called Zamu, and transforms from a robotic rhino to a hammer.

In vehicle mode Brakedown can store Zamu on his roof. 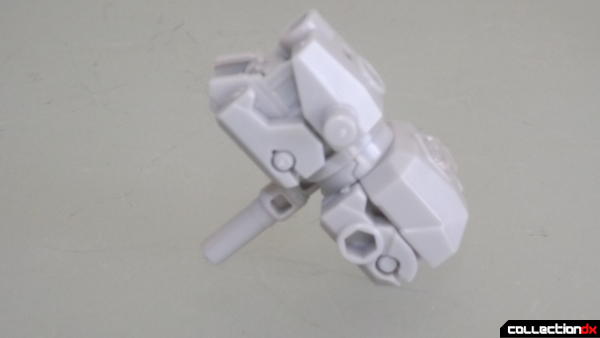 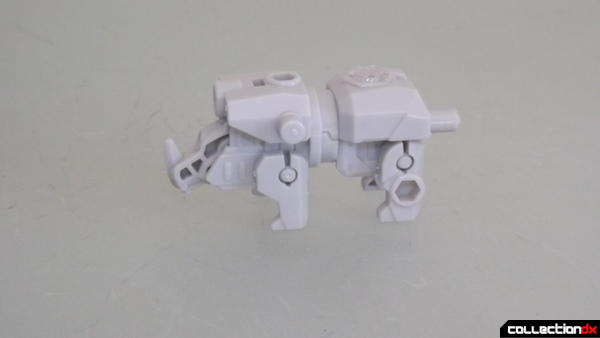 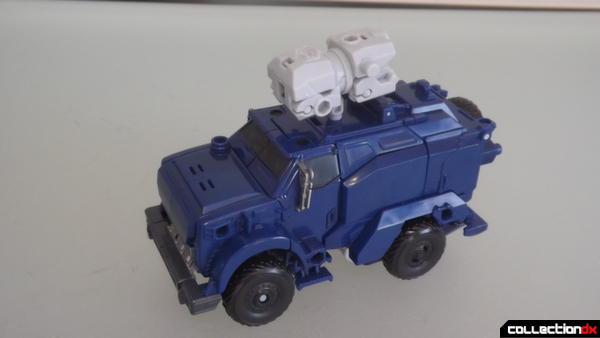 The Japanese versions of the TF Prime figures had less paint apps than the Hasbro releases, instead TakaraTomy released sticker sheets for you to apply onto the figure.

I've never been a fan of stickers, i've had G1 figures that the stickers eventually peel off and look awful, so i'd rather paint/customize my figures.

In the case of Brakedown i've yet to find the time to give him the attention he needs. 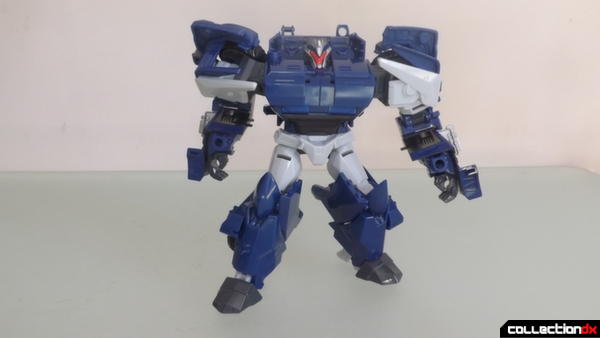 In robot mode, Brakedown looks superb, a spot on representation of the CG character in the show.

The face design is simple, like all Prime faces, and it's recreated perfectly in the toy.

The red face is a homage to the original G1 Brakedown and the yellow eyes are nicely highlighted. 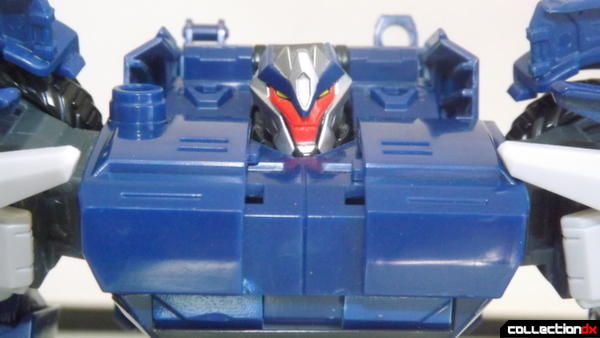 From behind you can see much more of the vehicle parts, all 5 wheels are visible and the back of the legs are hollowed out, which is an issue for some but not for me. 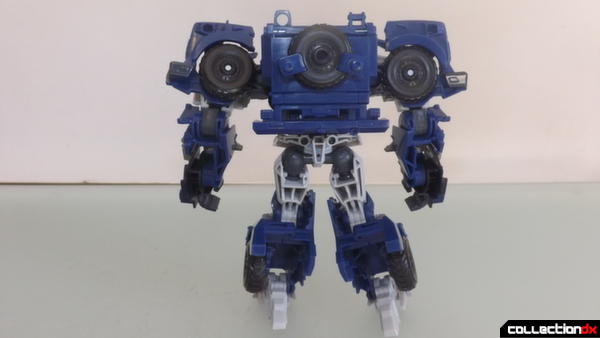 If you lift the chest panel up there's some nice detailing, in the Silas Brakedown this internal detail was changed to show a molded Silas inside. 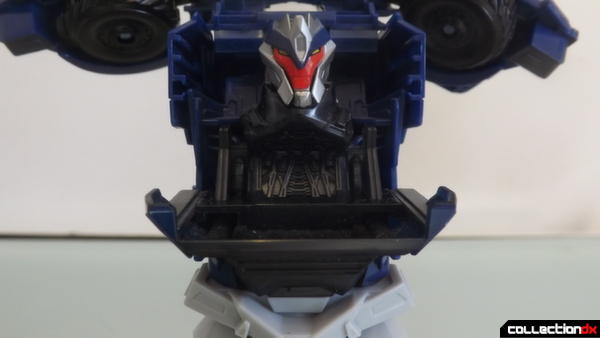 Articulation isn't much compared to other figures, mostly due to the design and kibble.

The shoulder kibble needs to be moved as you pose the arms, depending on the angle.

The elbows can get a 90 degree bend, but this is needed for transformation.

The knees have a limited single joint and the feet have a swivel forward and back, again for transformation. 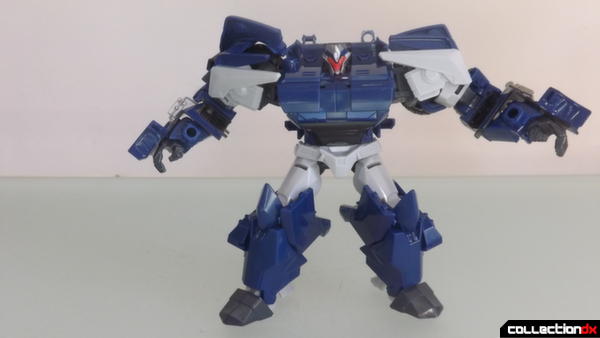 Brakedown can hold Zamu in two different ways in robot mode, the easiest being just holding the hammer in his hand. 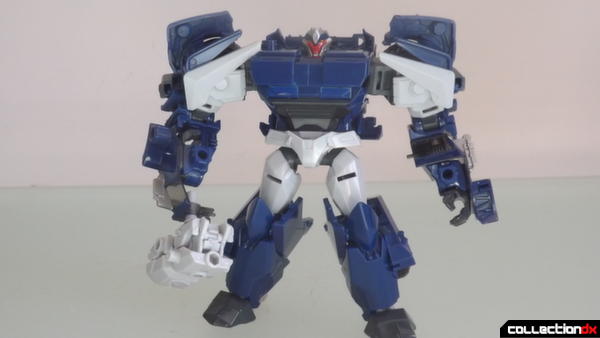 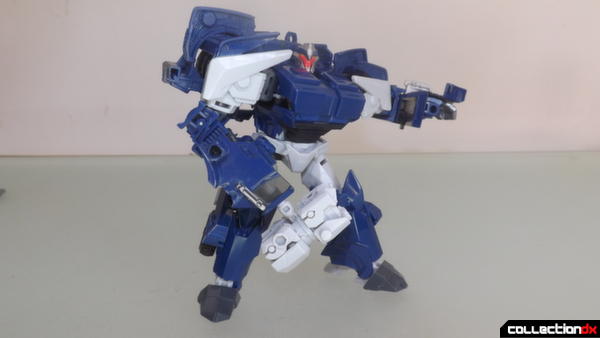 A quick look on Ebay showed me that Brakedown is going for ridiculous prices, £200+.

I guess this means he's the most expensive Prime toy I own.

I'd say Brakedown is worth maybe £50 (around $80) tops if you want to buy it, finding him at that price or less could be a challenge.

Even with his crappy articulation an lack of paint apps, i do love this figure, maybe it's my affection for the character influencing me a little, he looks great on my shelf with my other Prime figures. 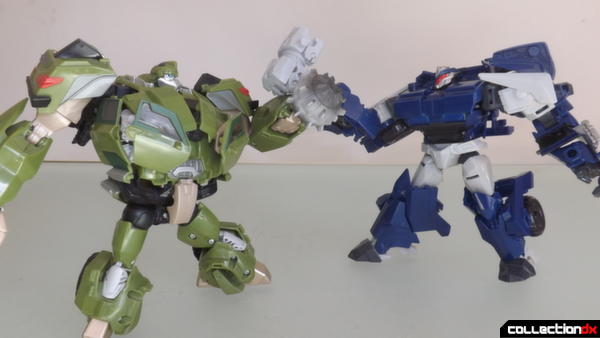 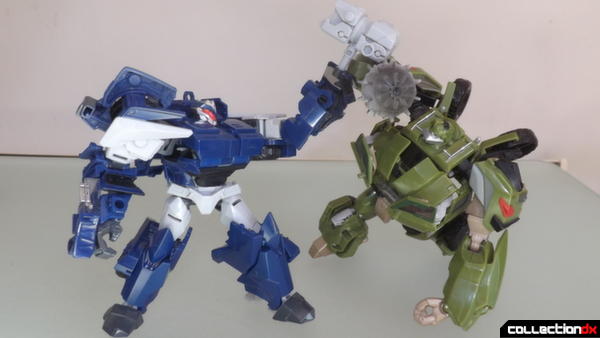 Here's a few with his best buddy (and sometimes internet gay love interest, seriously do a search for it) Knock-out. 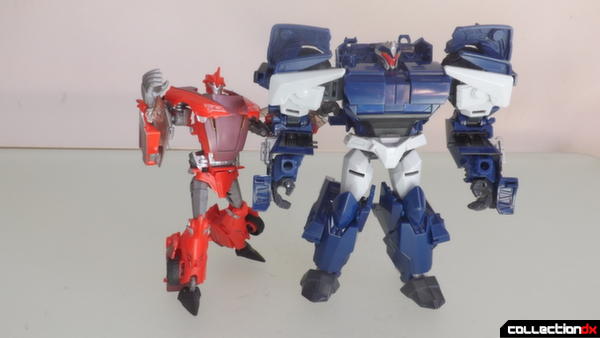 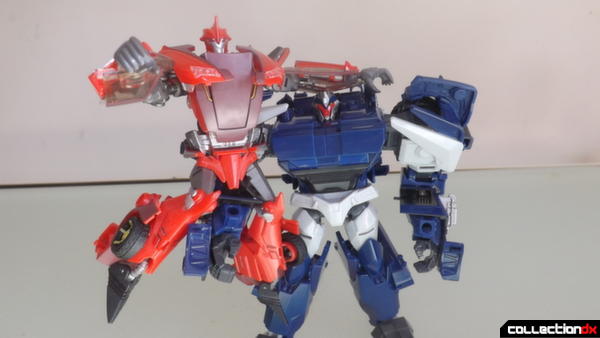 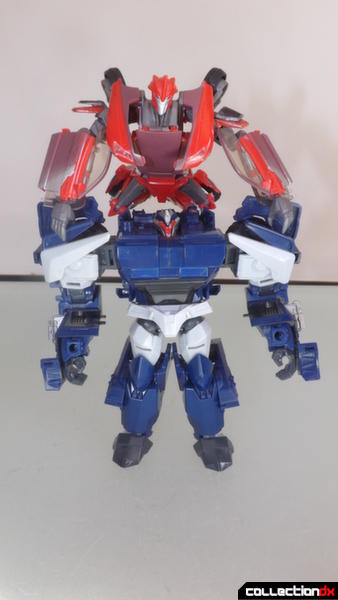 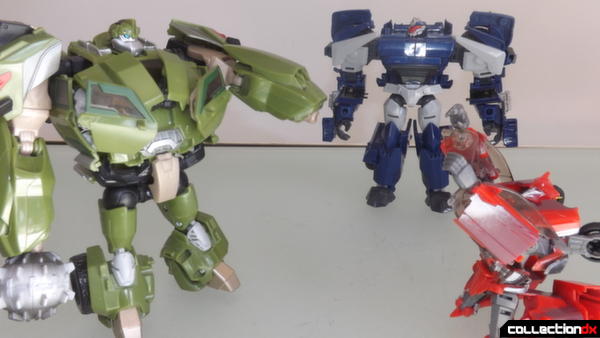 3 comments posted
Shame it never came to the US

This was an amazing looking figure when they announced it. Shame he never came to the states because Hasbro said "They weren't going to sell a figure based on a character that was dead." Which is ironic because they made TWO different molds of Cliffjumper and made one into a zombie twice in order to sell one as an exclusive at Comic-Con.

And to kick it in the lugnuts another time, Takara used this mold two more times.

I think the more likely reason (unstated by Hasbro because it makes them look stupid) is that Takara's pricing structure doesn't match Hasbro's. Their figures are almost individually priced while Hasbro uses waves. As a result, if Hasbro brought Breakdown over as a Voyager figure, the paint requirement and the weapon they would have to give him in lieu of the Micron would have put him over-budget. The best option would have been to import him as a First Edition figure, but that would have led to tons of shipping issues.

This isn't the first time this has happened, either; the RID/Car Robots trains were a pain for Hasbro to sell because they were right between Deluxe and Mega. It's no surprise that they revamped the entire pricing structure for Armada and beyond, even if the new names didn't stick.

Hasbro's stupid decisions the last few years made it really easy for me to give up collecting Transformers. When the Prime toys came out Breakdown was one of the main characters I wanted.