Note: I apologize that these photos aren't up to the high quality fare that's usually featured on CDX.  I'm still living upstairs so I am unable to do this review in my basement, which was flooded by hurricane Sandy. The only camera I have at the moment is my cellphone. 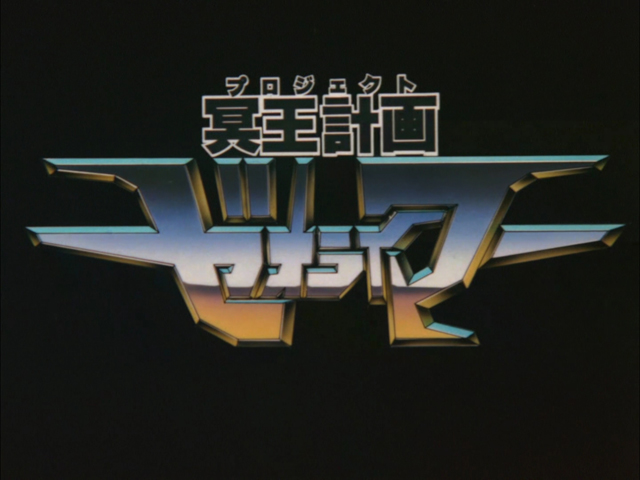 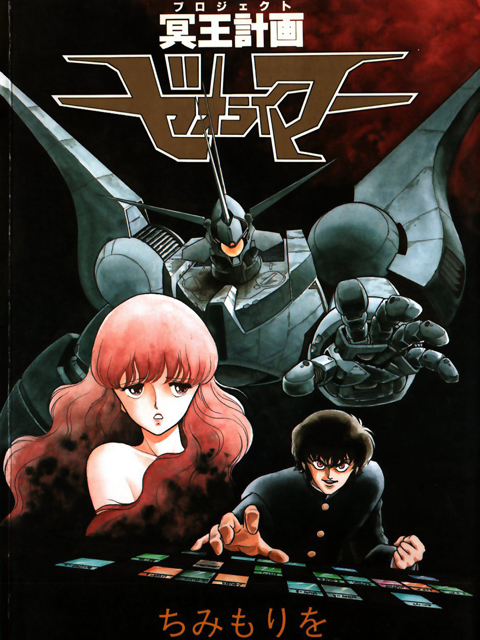 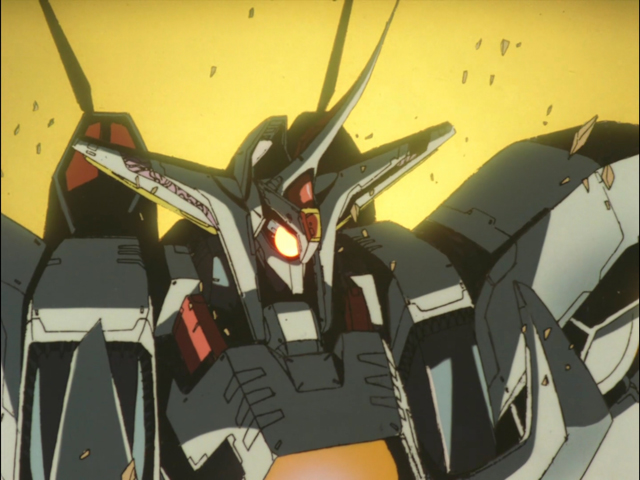 In 1988, the manga was adapted into a four episode Original Video Animation (which bares little resemblance to the source material). The OVA version out does the manga's story, cutting out the unnecessary elements and adding in aspects that make it one of my favorite OVAs ever. It’s crazy awesome. Watch it if you haven’t. It’s from the golden age of OVAs. It was considered obscure even in Japan until its inclusion in the Super Robot Wars franchise. Like in the anime, Zeorymer is totally invincible. You could say it’s the Mary Sue of mecha. Designed by Moriki Yasuhiro (the anime version), Zeorymer features many design staples of 80’s mecha such as sharp angles, claw like hands, and a monoeye. 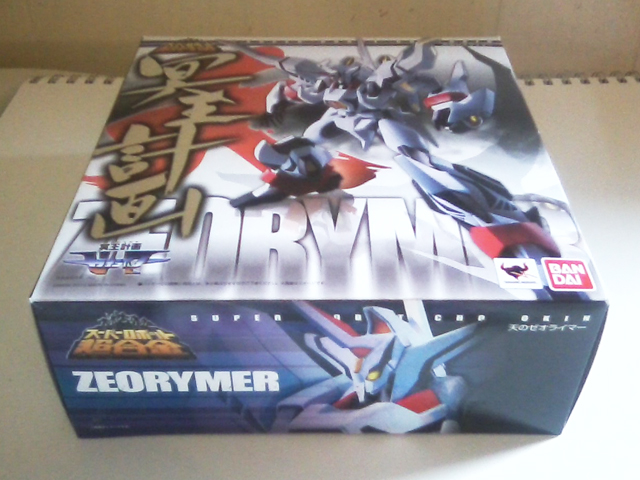 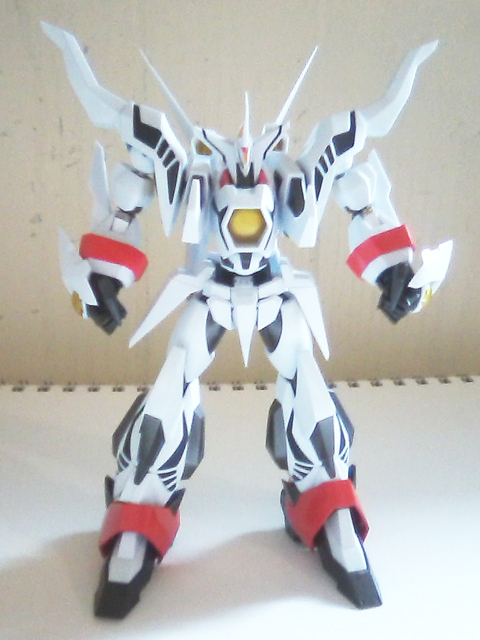 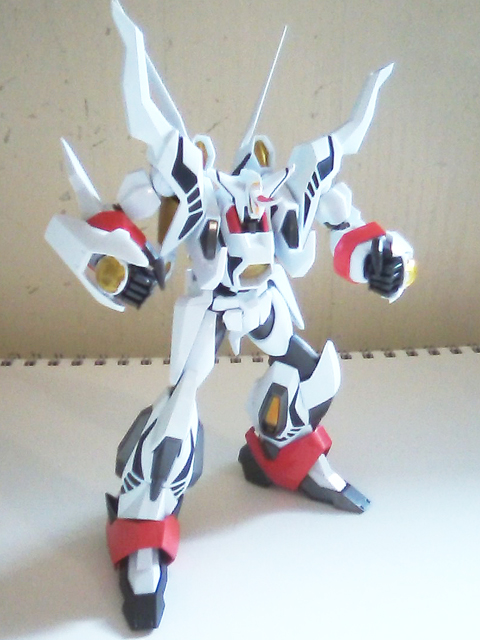 Zeorymer has had toys made previously, so it was just a matter of time before another one was done. The latest is from Bandai’s Super Robot Chogokin line, which is my first entry into the line. Standing at six inches, the figure features the usual mix of ABS plastic, PVC, and diecast metal. 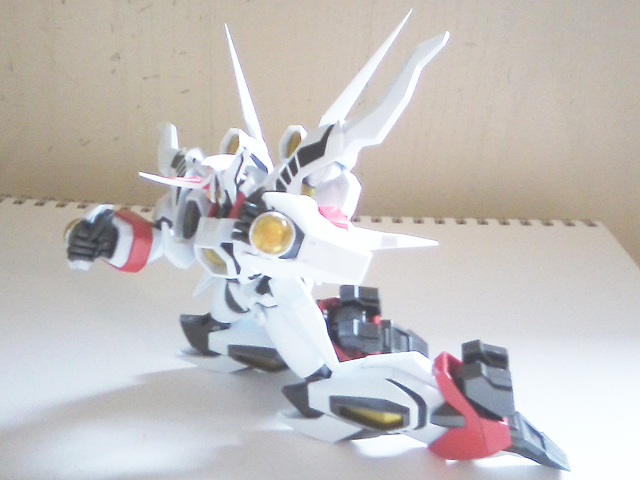 There’s quite a bit of articulation to be found here. The head can move side to side but not by much. The torso has a wide range of motion (I think the ball joint that connects the torso to the hips is metal, I hope so because it’s thin and I don’t want that to break.) The shoulders have two sets of ball joints, first the arms are connected to the part of the torso that has its back fins, then another connected to the torso itself. Speaking of the torso, the back fins are made of thin ABS and are sharp at the ends, so that’s another area to watch out for breakage. The arms are double jointed. The first area bends normally, then the second can bend upward, making the arm curl up or inwards depending on how the upper arms are positioned. The left arm on mine comes off too easily at the elbow but it easily goes back on.  The head, torso, and hands have transparent yellow plastic orbs. The hips (which feature movable skirt armor on all sides) have metal joints. Although the movable skirt armor helps with the thighs moving upward, it’s a little stiff and doesn’t move as high as it should. There’s more movement backwards than frontwards. The knees are double jointed. The ankles have full movement (only slightly limited by the red coverings) and the feet can move downward. Metal content is s follows: elbows, the ball joint in the torso (possibly), hips, thighs (wrapped in PVC), much of the legs, and the underside of the ankles. It’s a decent amount that adds just enough weight. 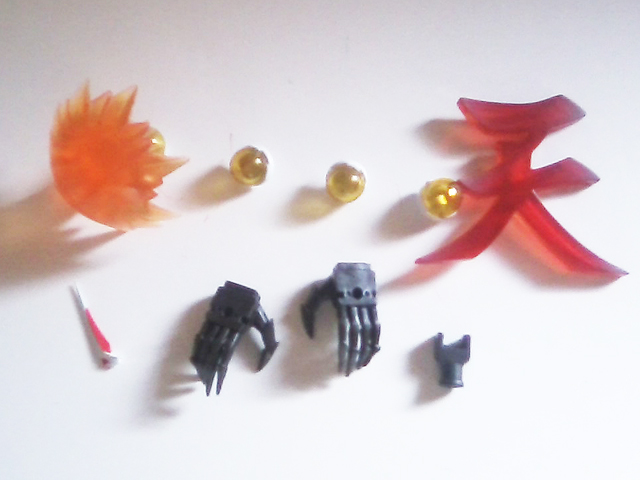 There are a couple of accessories but it’s light since Zeorymer has no melee or arsenal weapons.  Instead, Zeorymer has energy based attacks. There are two sets of horns, one ABS and one PVC, annd two pairs of hands, open and closed. 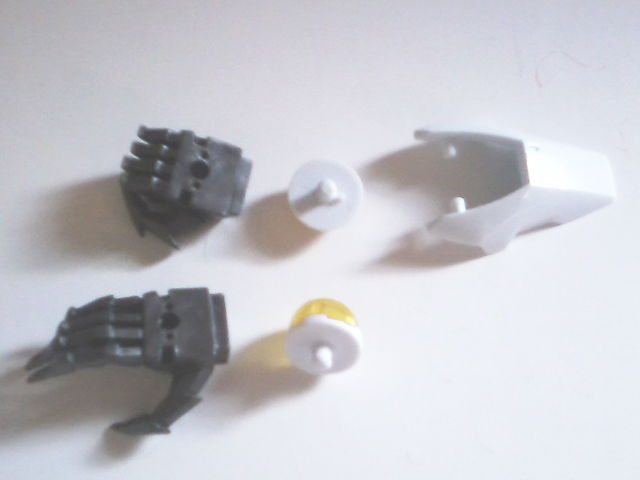 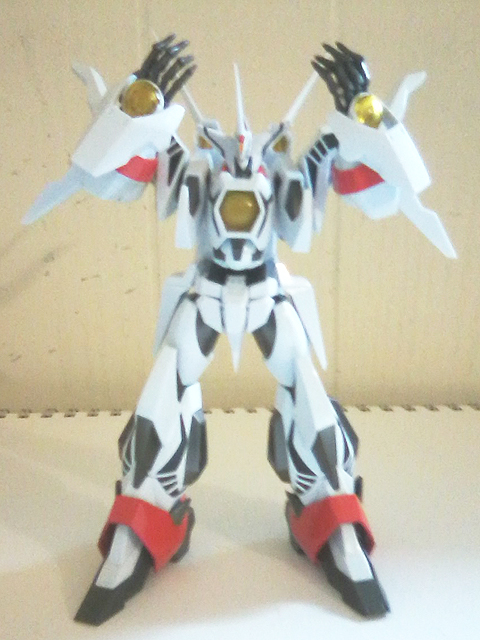 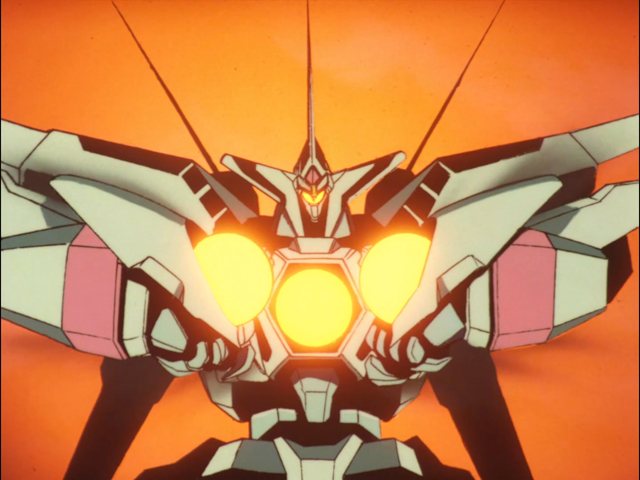 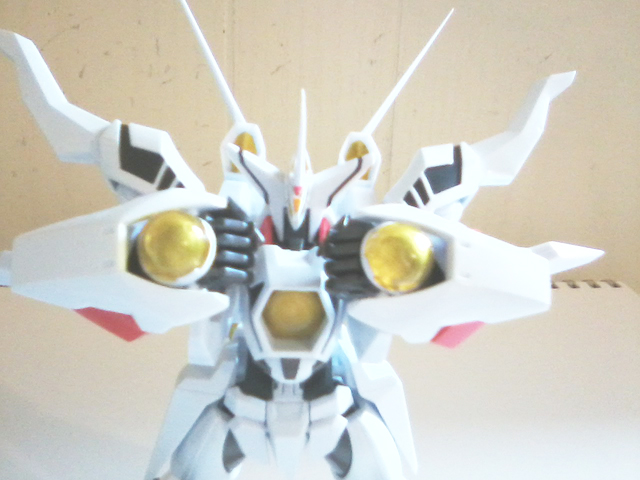 In order to change hands, you need to remove both the orbs and covering and place them on the other hands. The tiny pegs on the larger orbs broke, but they are really unnecessary anyway as those were just there to prevent the orbs from rotating on the hands. The main pegs themselves are the only needed connections. 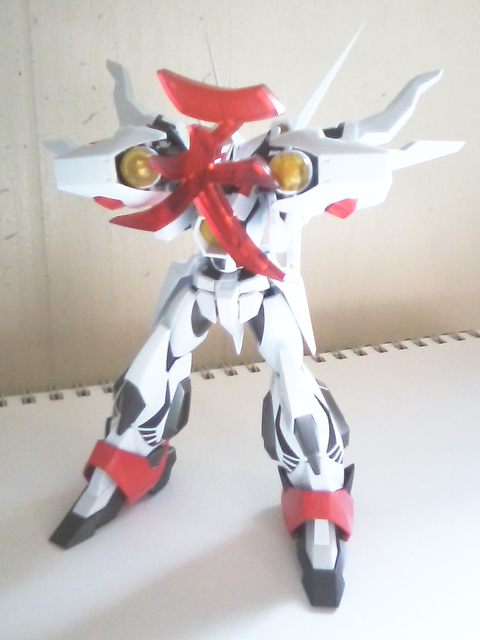 Another orb comes with an ABS chinese character of “heaven” since it’s called Zeorymer of the Heavens (the other mecha in the anime correspond to Chinese element symbol called Ba gua.) 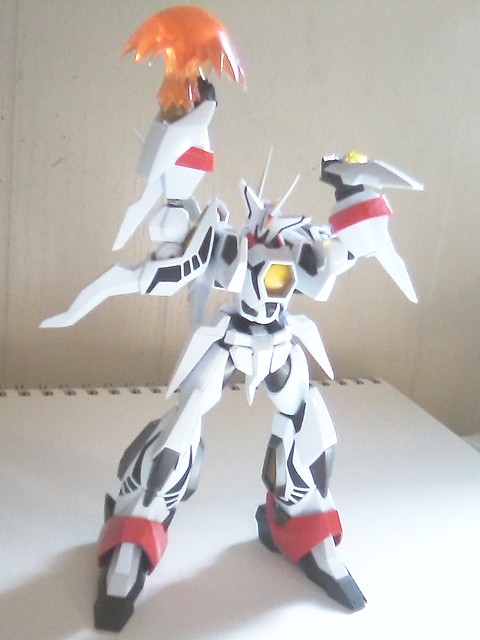 The effect part here is an energy blast connected to another orb. 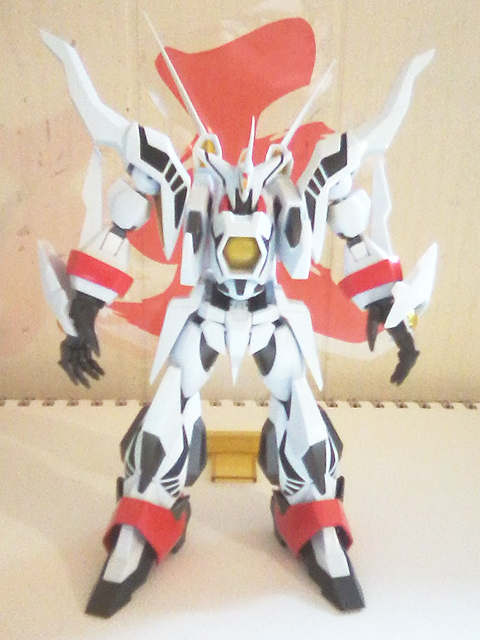 A large plastic sheet also printed with “heaven” comes with a simple stand for it. Also included is a connector for a Tamashii Stage Act 5 Action Support Type for Mechanics which I don’t have. 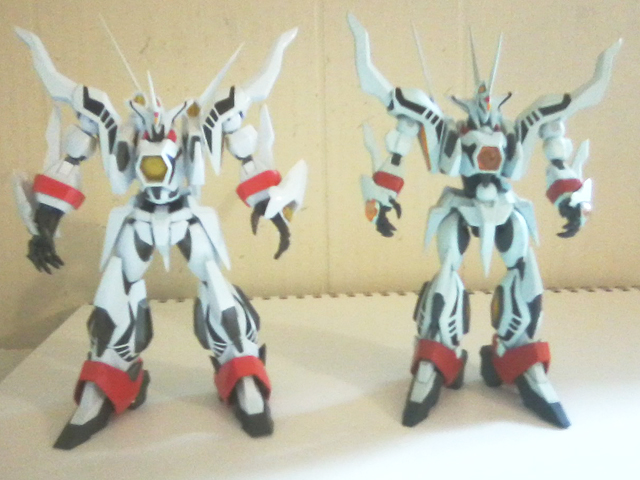 Here’s the SRC with the Yamato figure that was released in 2006. They weigh the same amount oddly enough (the Yamato one was made of dense PVC and ABS.) Unlike the Yamato version, the SRC doesn’t separate into it’s three parts (yeah, it’s a combiner). 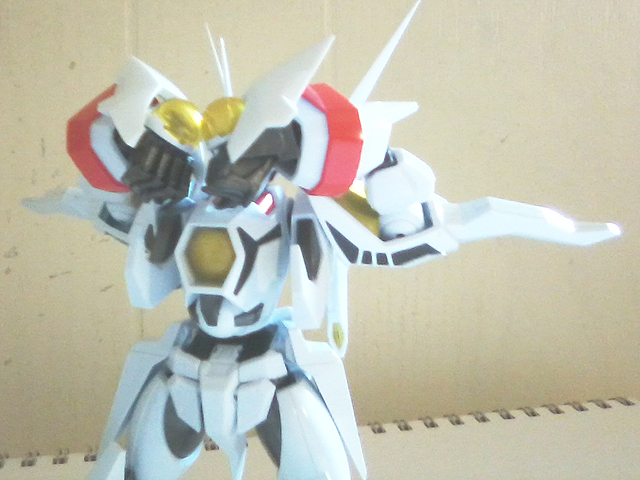 Overall this is nice representation of Zeorymer with nice articulation (although the hips could have more clearance) . I’d just watch out for some of the fragility issues (the pegs on the orbs), the thin joint on the torso (if it isn’t metal), and the fins. Otherwise this is cool figure from a cool anime. Thanks to HLJ for sending me a sample to review. 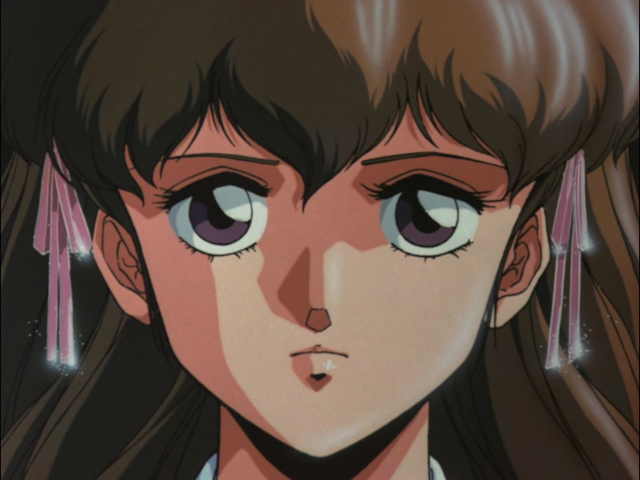 One more thing. This review is dedicated to Cheiko Honda, the voice actress for Miku Himuro from the anime version of Zeorymer. She died during the month of February from cancer.

I have both the SRC and Yamato figs. This SRC is super solid. I like it even more than my Alteisen and GaoGaiGar. I'm just thrilled to have a spectacular new figure of an obscure bot.

I'm a big fan of Zeorymer's design. The SRC manages to do it justice.
It's hard to keep the horn from falling out of the head, though.

For some reason everytime I look at this guy I end up wishing Bandai would make an Escaflowne. Just something about it reminds me of the other mecha. It's a great mech, provided you have a high tolerance for razor sharp spiky wings all over the place.