I'll be the first to admit that I am very late to the party when it comes to Transformers Classics figures. Even as my fellow fans rushed to grab everything they could in hopes of more "Neo-G1" love from Hasbro, I just wasn't into it for some reason. The most effort I put into the line was snapping up the one lone Jetfire from around a run down Toys 'R' Us in the middle of nowhere. After that, I didn't see much need to delve further into it. As I started to get serious about collecting Rodimus toys, filling the Classics-shaped hole in my collection still didn't become a priority for me. And so after a lot of procrastination, I decided that if I was going to get some version of Classics Rodimus, then it should be a real stylish ride. Enter: the Japanese-exclusive United UN-23 Rodimus Prime.

United was a bit of a hodgepodge collection of movie, video game, and formerly US-exclusive toys thrown together with a number of recolored figures reaching all the way back to the start of Classics. Six years after Classics Rodimus debuted, United brought the figure back again, but with a somewhat novel approach to its paint scheme. 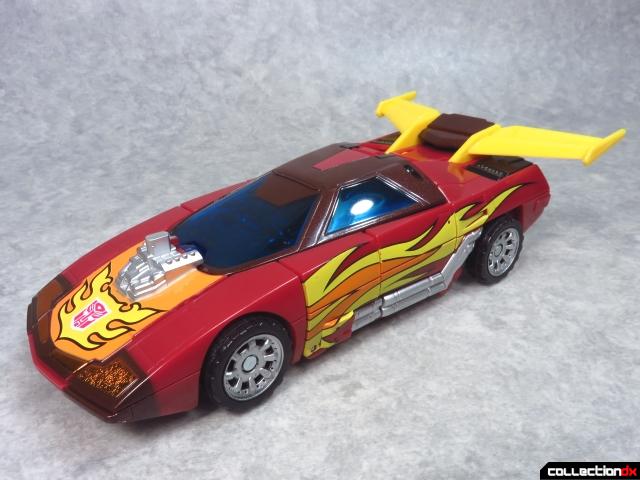 TakaraTomy gave the old Classics mold the deluxe treatment, with more paint apps than any previous release and even more tampographed flame patterns. This toy's alternate mode is based on the Dome Zero concept car, but hot-rodded with the character's signature engine, exhaust pipes, and spoiler. Also note that this toy was actually labelled "Rodimus Prime," and not "Rodimus Convoy" or "Hot Rodimus" as is his official name in Japan. 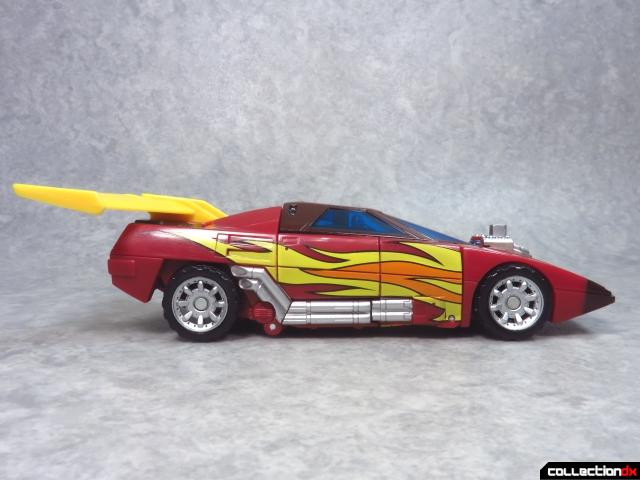 At about five and a half inches long from bumper to bumper, United Rodimus Prime is a good-sized toy car. 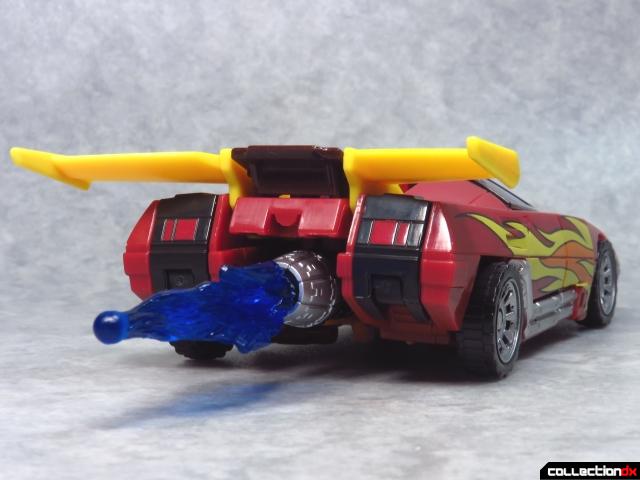 Like every other iteration of this mold, Rodimus comes with a jet engine-shaped flame weapon that serves as a Batmobile-style booster in car mode. You can pop the goofy-looking blue flame projectile in there if you want. 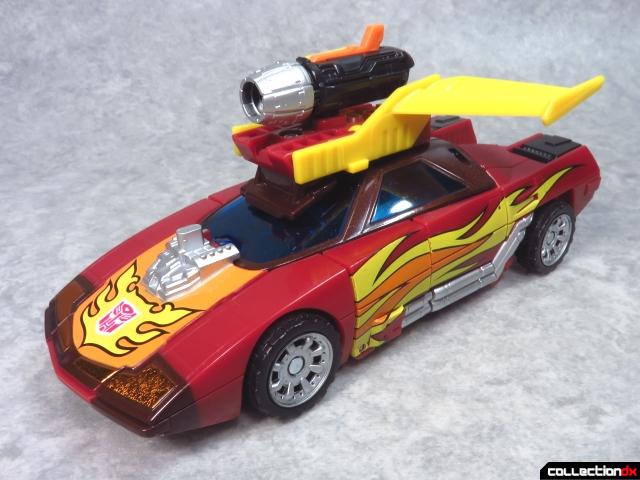 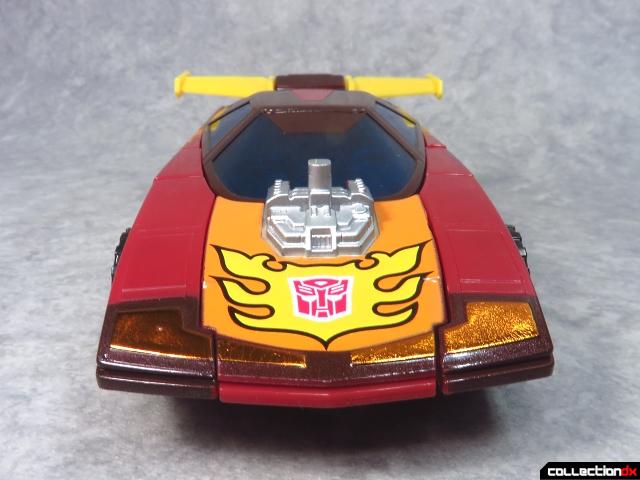 The toy also received some minor remolding, with the exposed engine block gaining a 5mm peg for compatibility with the then-recent Arms Micron figures. Also, check out the metallic gold paint used for the molded headlights. 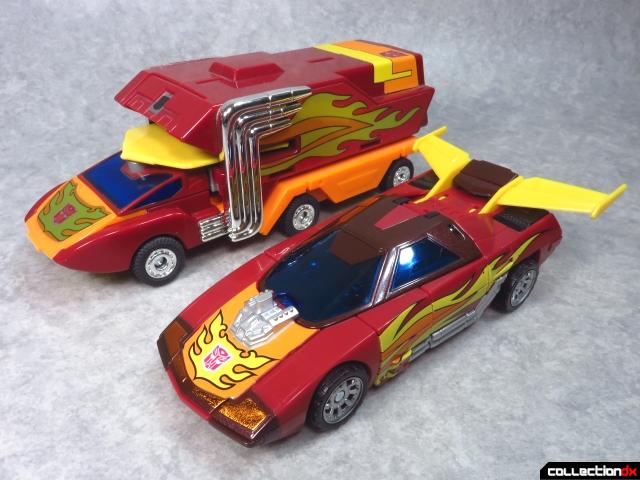 As I alluded to previously, the United Rodimus Prime really lives up to its name, with a paint scheme inspired directly by the character's G1 appearance. While the large side flames had to be adjusted to fit on the side of a more streamlined car mode, the hood emblem is an almost perfect replica of the hood sticker on G1 Rodimus. The United toy even features extra paint between its spoiler wings and on the front bumper, to better emulate the character's animated design. Again, the idea of taking a toy that is intended to be a pre-upgrade Hot Rod and coloring it as the Matrix-enhanced Rodimus Prime is a really cool approach and helps make this particular version of the Classics mold stand out among the rest. 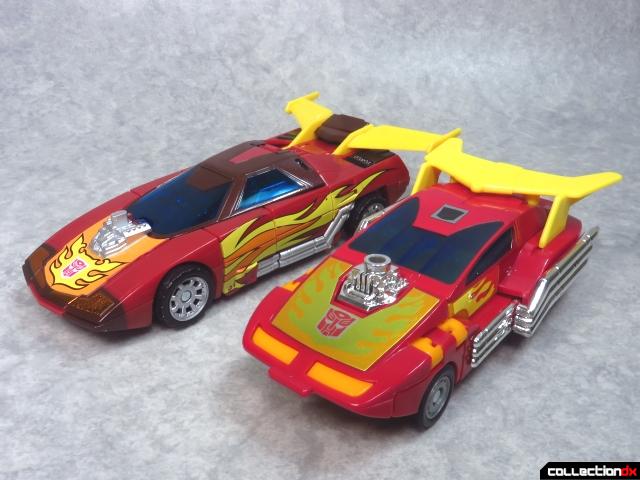 And while this is still the character as a straightforward sports car like the G1 toy, and not the full on Citroen Loadrunner-style trailer truck we've come to expect, I think United Rodimus's overall presence matches more with the Autobot leader than the humble Cavalier. 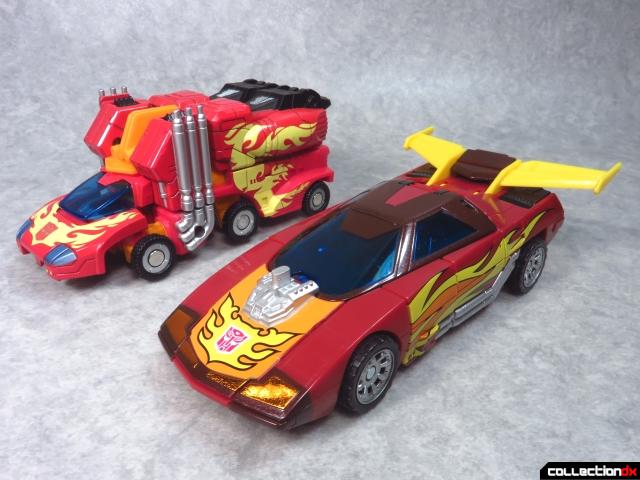 And I would be remiss not to show a Classics Rodimus alongside its immediate successor, the Titanium Series figure. Honestly, I'm surprised at how that diecast brick looks like some long-lost Machine Wars design when compared to the sleeker Classics toy. 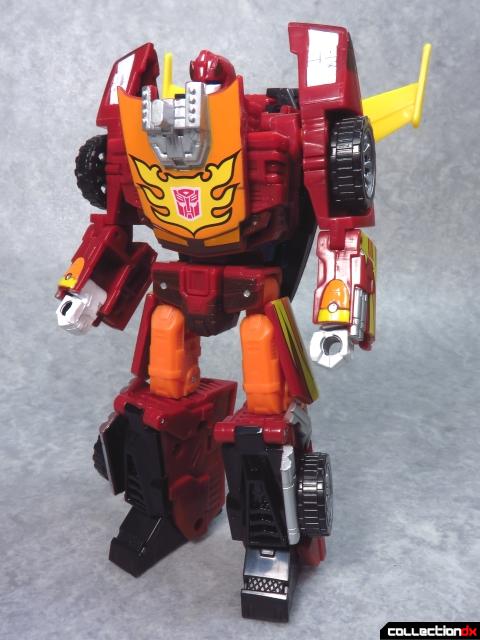 Like its vehicle mode, United Rodimus's robot mode is going for a very G1-inspired look (within the limits of the base toy). To that end, the figure uses white paint for its hands, shoulder blocks, and face, as well as black shin guards that emulate the character's stylish boots. One aspect of this toy's design that I find particularly novel is how his leg wheels move out on a slider, just so the shin panels can fold down cleanly against the lower legs. It's the kind of aesthetic tweaking through transformation that a lot of retail-oriented Transformers have mostly done away with. 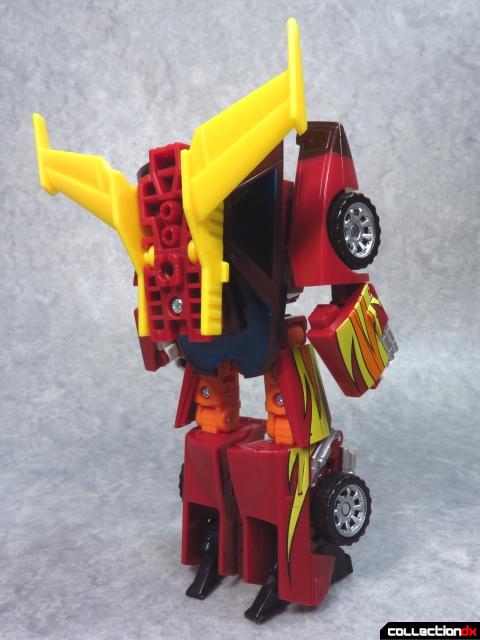 Rodimus stands five and a half inches tall, which puts him in the typical size class for Deluxe Transformers. 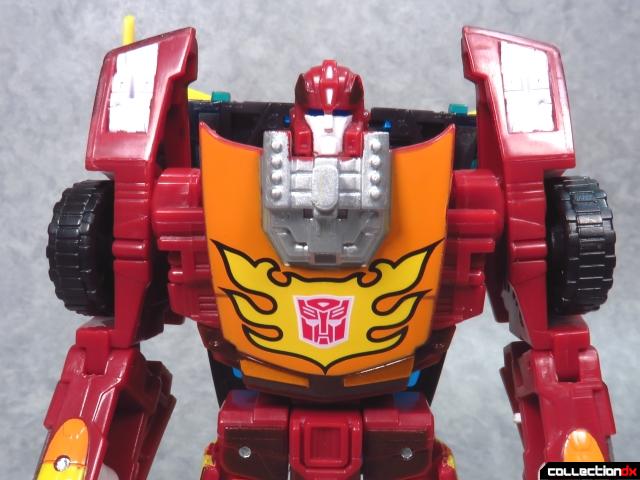 This toy has a nicely heroic profile, although I find the engine ascot to be a bit distracting. 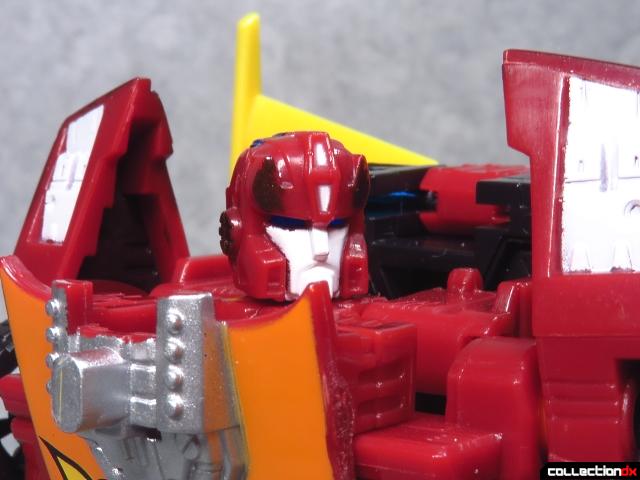 This being the first time I've ever owned this mold, I never really got a good look at the Classics Rodimus head sculpt until now. While the helmet design is pretty spot on, the way the toy's lips blend right into the oversized chin guard gives the heroic Autobot a wicked frown. This mold is from 2006, too, so that means Classics Rodimus was Grumpy Cat before there even was a Grumpy Cat! 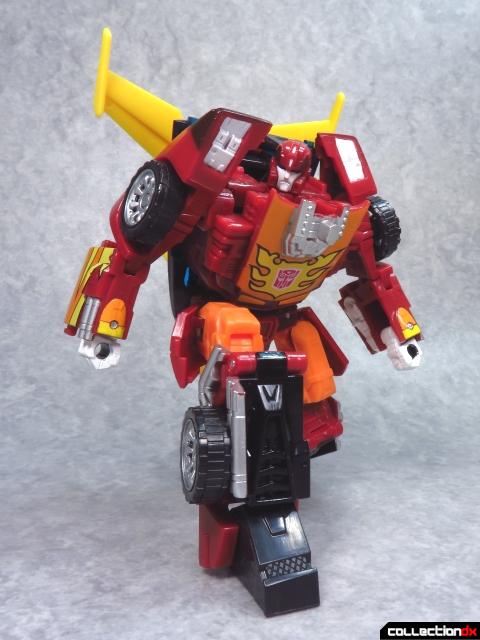 Face weirdness aside, the Classics mold still holds up as a decently poseable action figure. The only thing the toy really lacks is a waist joint and bicep swivels. Other than that, it accomplishes a heck of a lot using mostly straightforward universal joints and hinges. The only ball-joints are in the toy's shoulders, and give him a small amount of outward arm motion. 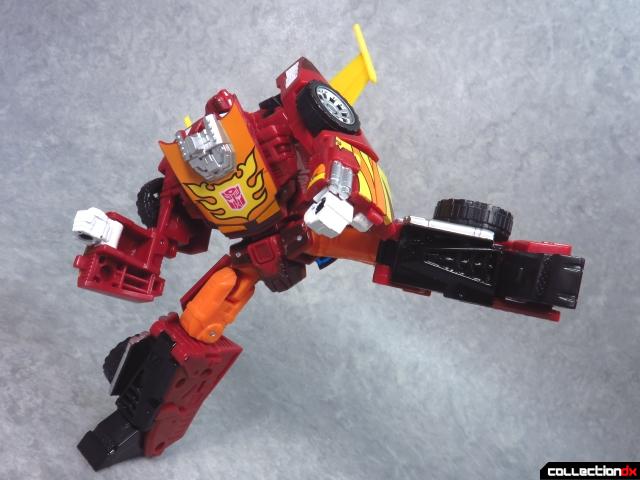 Rodimus's hips have the best range of motion on this figure. He can even do a good high kick! 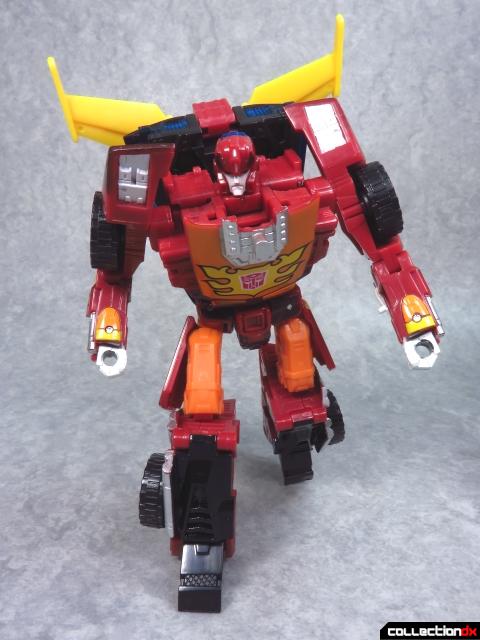 The toy also does a decent job of replicating the "running through the exploding innards of Unicron" pose. 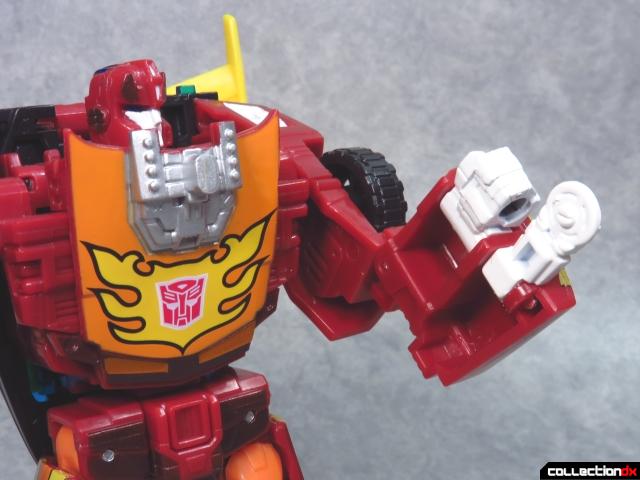 His left hand features a flip out buzzsaw, sorta like the one in the movie. Sadly, the bright white paint gums up the detailing and makes the dinky weapon look even more like a pizza cutter. 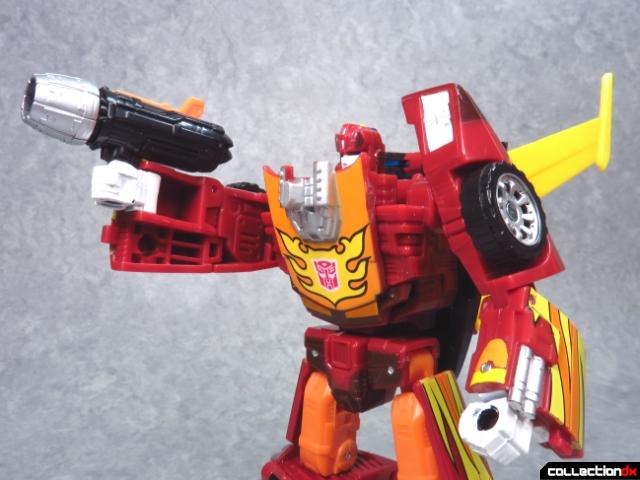 The flame launcher can be held in either hand. Also note the new 5 mm port underneath his right hand. TakaraTomy added this as another way for United Rodimus to interact with Arms Micron figures. 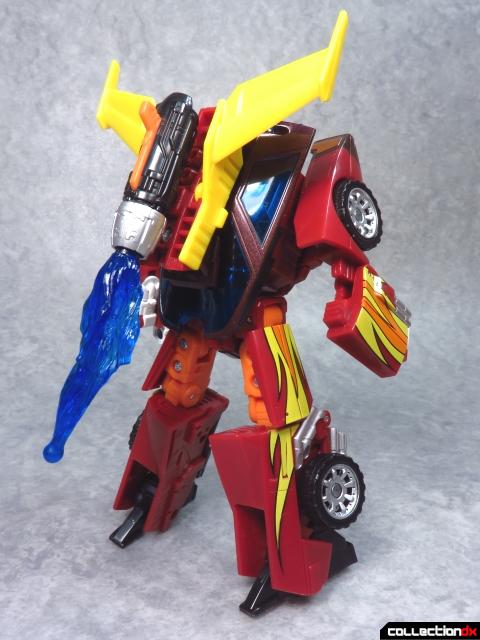 And if you must, the flame launcher can serve as a silly looking jet pack.

Anyway, on to more comparisons with other members of my Rodimus shrine. 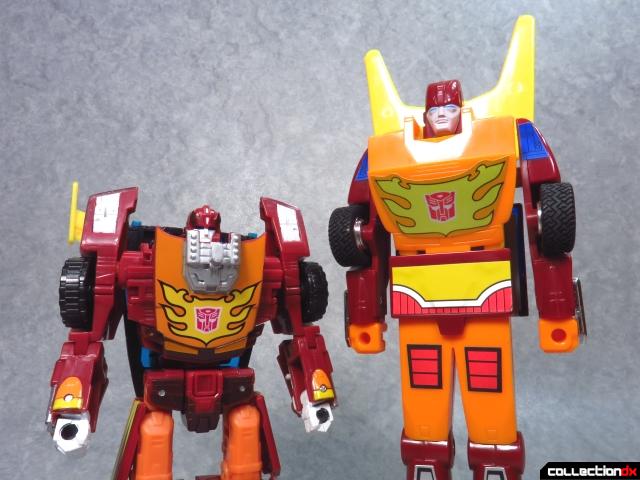 Seeing the United figure's near perfect replica of the G1 toy's chest sticker is both cool and kind of eerie at the same time. Sure, it's been reshaped a bit to fit the Classic toy's bosom, but all the lines and curves of the six flame spouts have been lovingly recreated. 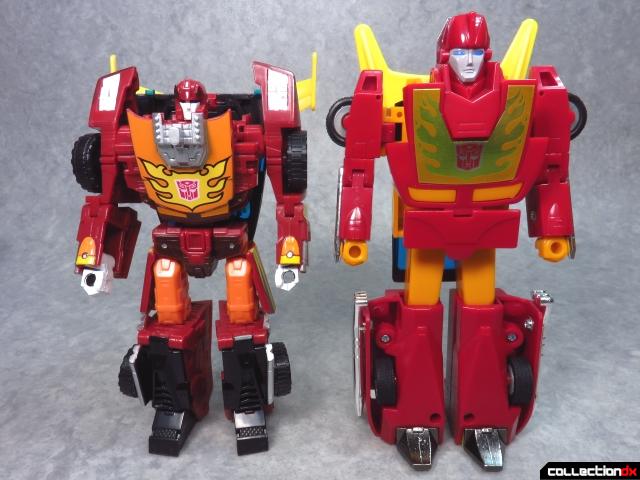 The Classics Rodimus ends up being a bit shorter than the G1 Hot Rod in robot mode. It is cool to see how the original toy's influence is still readily apparent in the newer toy. 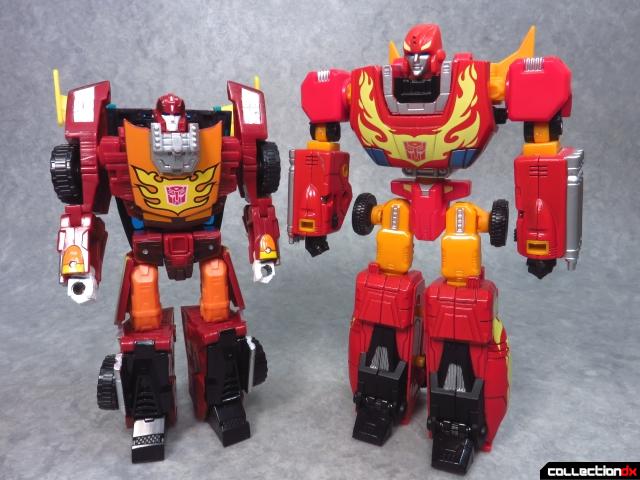 Next to the Titanium figure, United Rodimus still looks more "Prime-y" to me. That said, it is neat to see what details the heavy metal leader borrowed from the Classics mold. For example, Titanium Rodimus's collar was painted to match the chest mounted engine on the Classics toy. 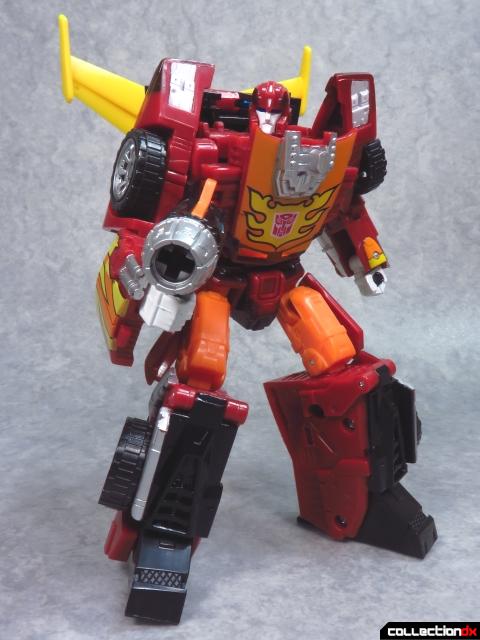 And so, after putting off getting some variation of Classics Rodimus for so long, I feel pretty satisfied with finally owning one. The Transformers United version is one of the priciest variants out there, but I firmly believe this is the best looking version of the mold. With the upcoming Platinum Edition Clash at the Planet of Junk set, the Classics Rodimus is celebrating its tenth anniversary, and I now have firsthand knowledge that it is indeed one of the most solid Transformers of the modern era. It's still not something I would rush out and buy, but it's nice to know there's a good baseline G1-style Rodimus figure for fans who want one. 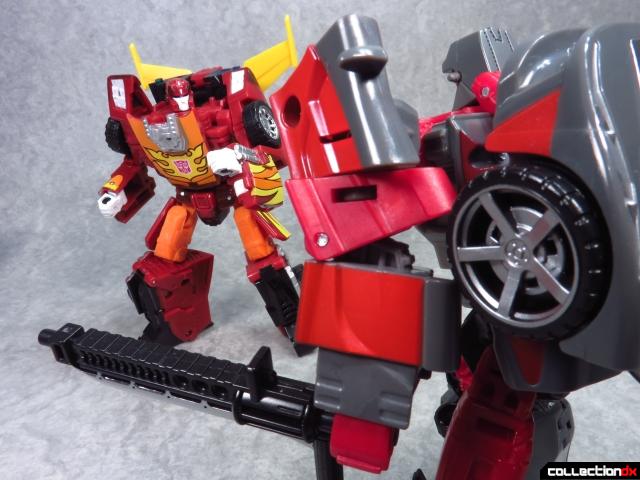 At the very least, I now have a Rodimus that's ready to give Wildrider some payback for the events of "The Burden Hardest to Bear."

Do you count universe(2009) generations, reveal the shield, age of extinction, as classics?

I think anything that is a direct update of an older non-movie character would be Classics. Even new characters life Drift and Windblade would fall into that category for me, as they are following that style.

I only have the TFCC Side Burn version of this mold. I wasn't exactly sure what to expect, yet was pleasantly surprised. I'd like him to be a little more flexible, but he's a pretty cool figure overall.

FYI This version is getting a platinum cartoon coloring version along with Wreckgar and Junkion Warrior but holy $--- the price is bonkers.

I think so too! Except when Hasbro repaint
figures from other lines like the "classics" devastator from 2006 who was just a repaint of the energon devastator.