SEN-TI-NEL recently released this figure of the Evangelion-01 Test Type. Unlike the other Riobot figures, this one was produced by studio RECKLESS, not Chemical Attack. It is a somewhat stylized version of Eva Unit 01 as it appears in Evangelion:2.0 You Can (Not) Advance. This figure was released in late January of 2012 for 7800 yen.

The figure comes packaged in a stylish, high quality box. 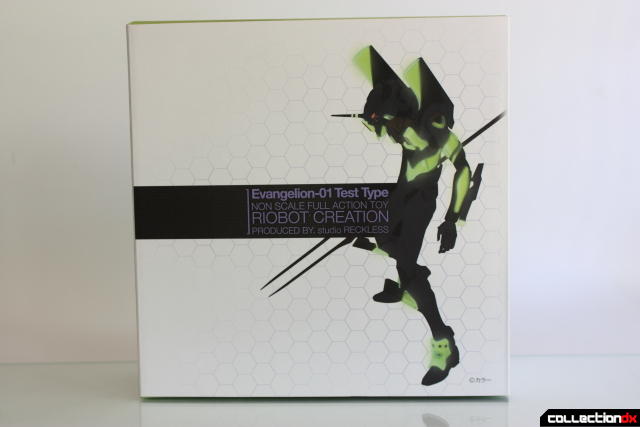 There is a front flap secured by velcro with a window underneath. 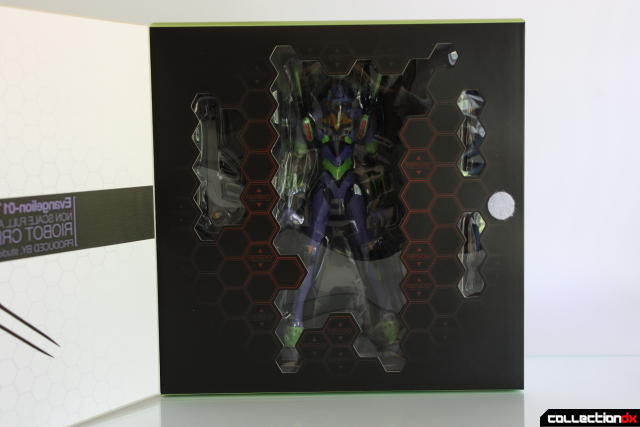 Various information about the figure is on the back of the box. 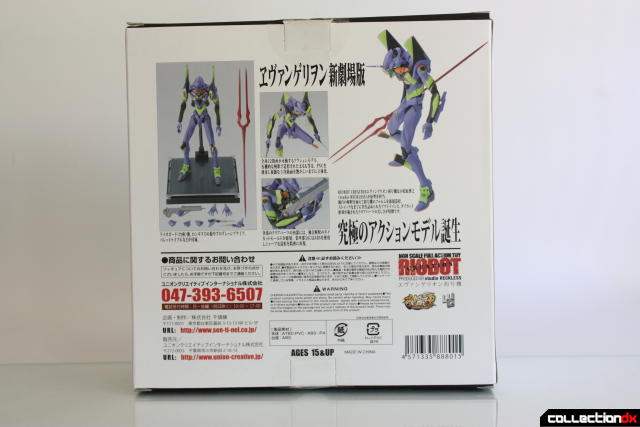 The figure is packaged in a plastic tray with some of the accessories bagged behind. Strangely, there was no manual. I'm not sure if it was just a fluke or none of the toys included one. Either way it is not really necessary. 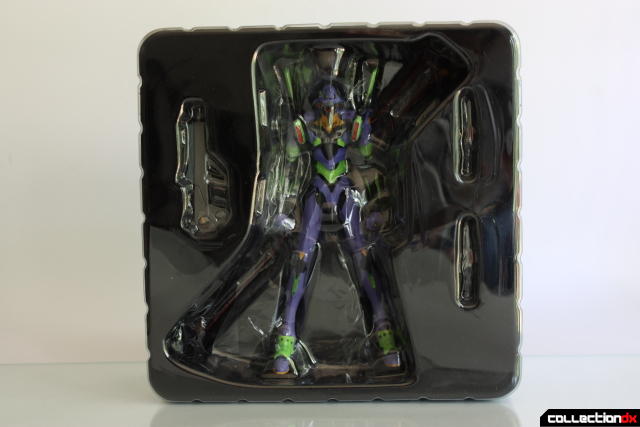 Out of the box the figure stands approximately seven inches tall and feels rather light. 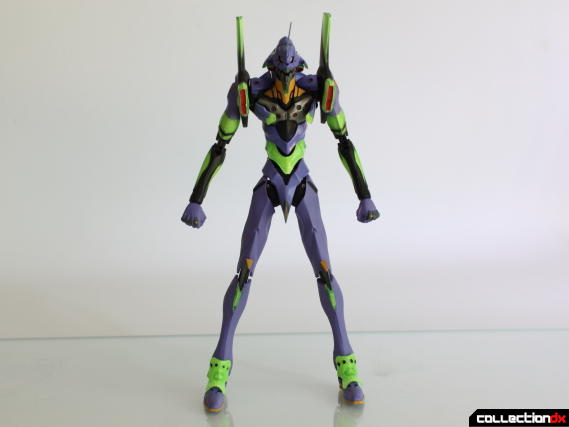 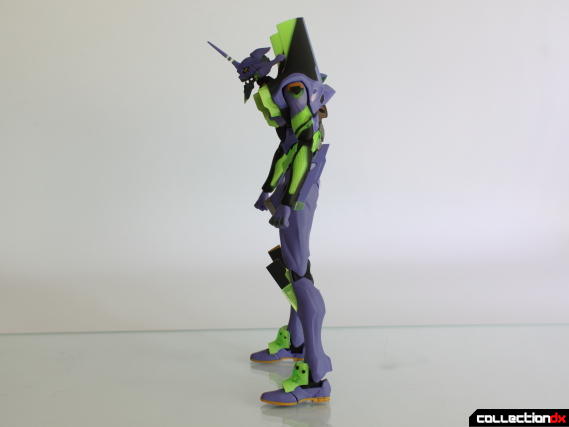 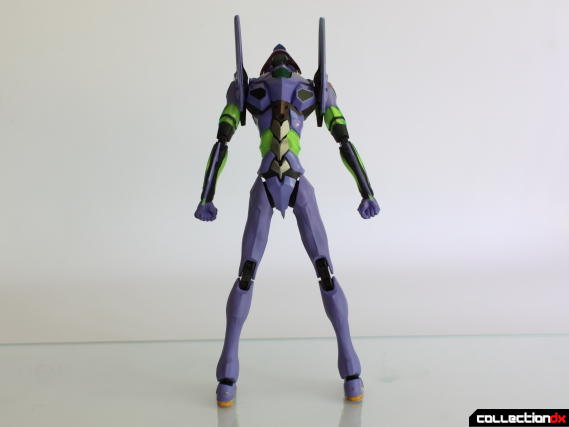 I noticed that out of the box the fin on the head was bent. Upon touching it to confirm if it was soft plastic it instantly broke off. It had to be re-glued and there isn't sufficient enough of a peg to hold it into the head. It came off several other times during this review. It is very easy to bump and every time the figure falls forward its pretty much guaranteed to hit the ground causing it to come off as well.

The mouth of the figure can be opened and the detail on the head is very good. 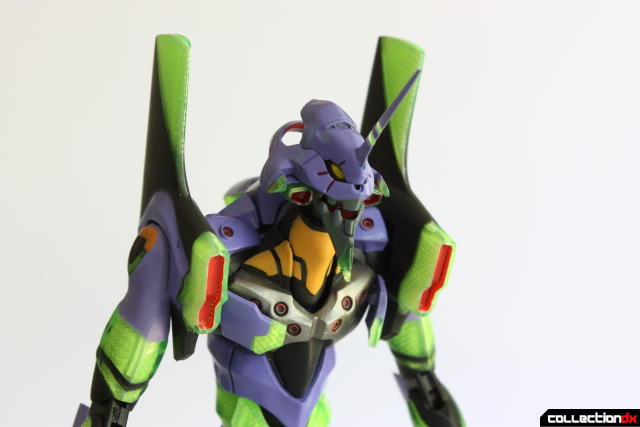 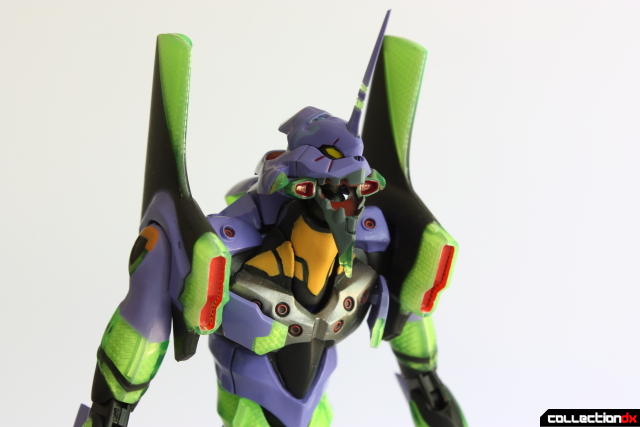 Pose-ability of the figure overall is very good. The shoulders and elbows are a bit limited and the arms have a tendency to pop off at the elbows. The shoulder fins also come off easily, but both are simple to reattach. The neck has a joint at the top and bottom, and also a ball joint. The large black joint at the top of the neck stands out too much and detracts from the overall appearance. 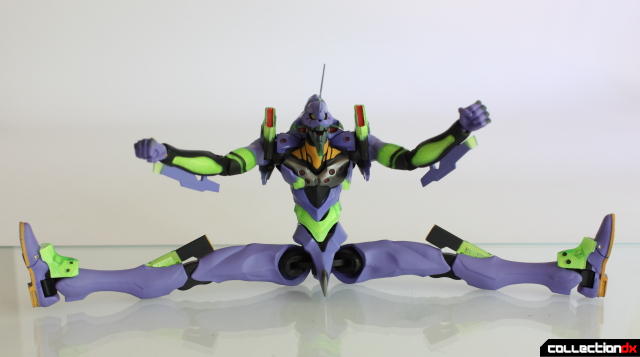 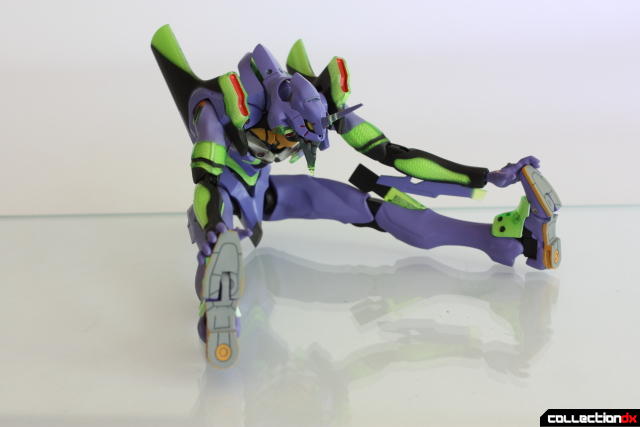 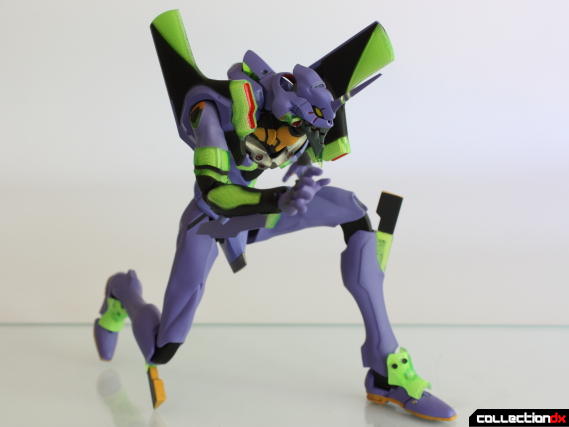 The armor on the chest can be opened for some reason. 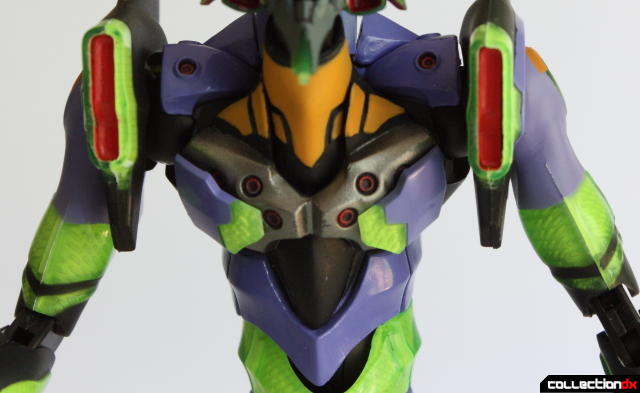 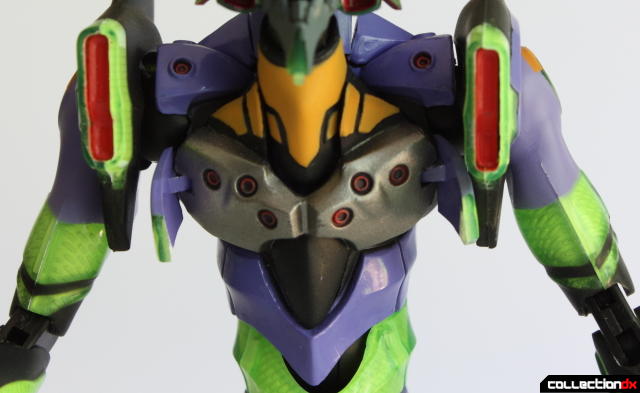 The figure comes with a few accessories including the pallet rifle, which can be held in the left or right hand. 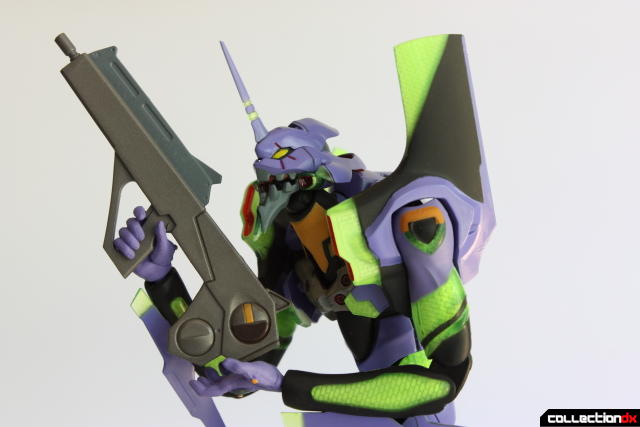 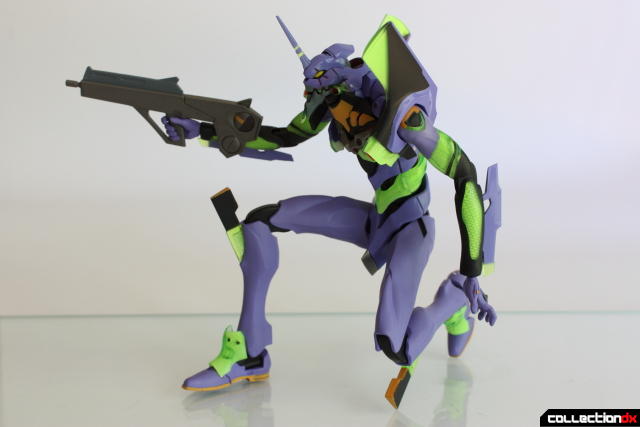 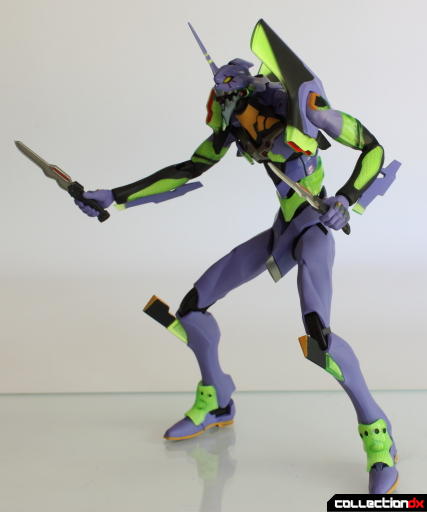 The Lance of Longinus is also included. 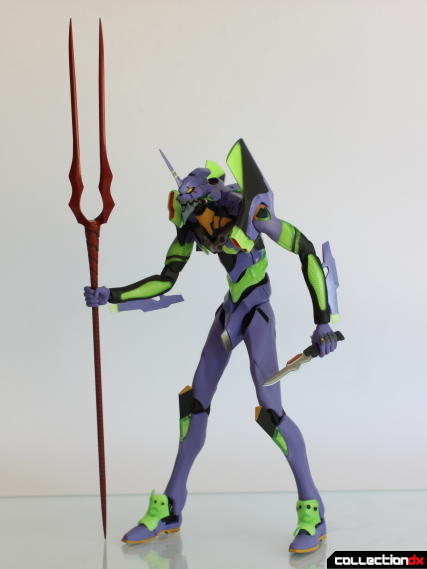 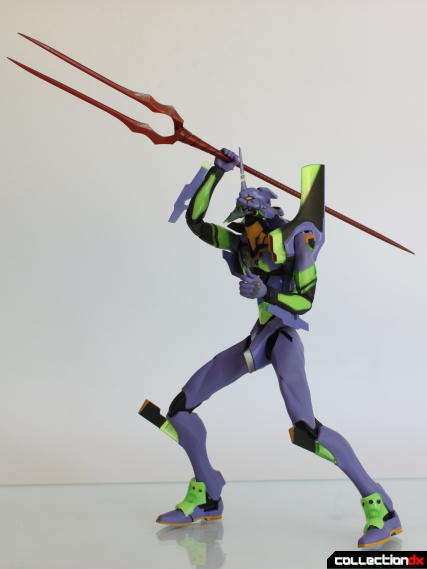 The standard RIOBOT stand is included. There is no mounting point on the figure so you have to use the claws to hold onto it. They don't work the greatest and the figure can easily fall out. 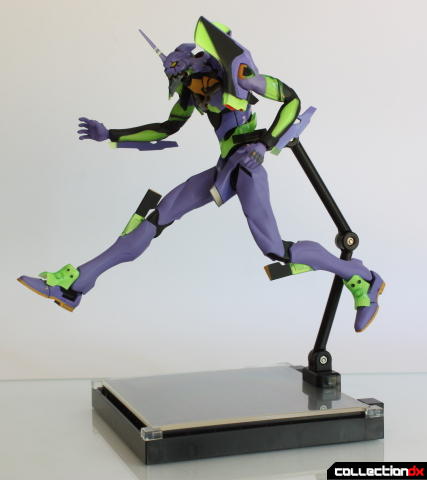 The figure also comes with tons of different hands. There is a left and right version of each. Unfortunately mine only came with one lance holding hand and three rifle holding hands. 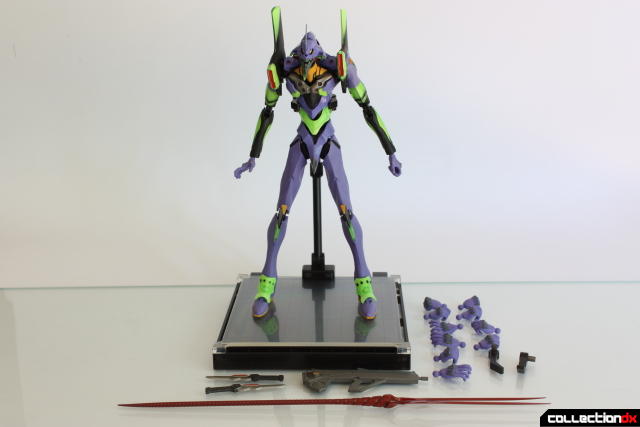 Overall the figure is pretty well constructed. There are a few annoyances like pieces popping off. The fragility of the horn is a big problem and can make the figure frustrating to handle. The ankles are a bit loose and combined with the top heaviness of the figure it can make posing difficult.

The figure is a mix of PVC and hard plastic. Even though the PVC is relatively hard, in my opinion it makes the figure feel cheap. The legs are entirely PVC and have a dull finish that does not match the rest of the figure. The overall feel is like an up-scaled Robot Damashii figure.

The paintwork and sculpt are extremely well done and I only had one minor paint scrape on my figure. All of the green pieces are molded in clear plastic and have a detailed texture underneath. The clear green really stands out and almost has a day glow effect. 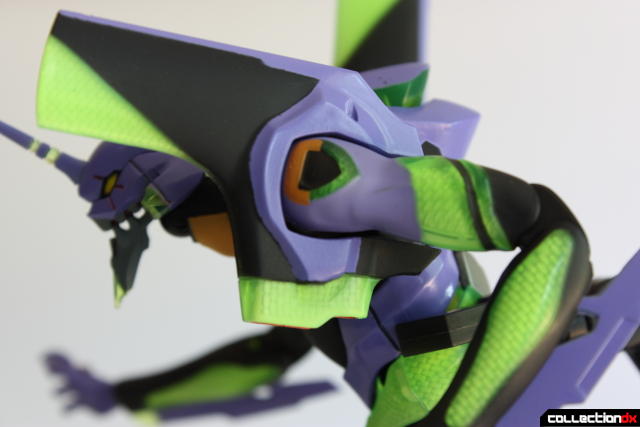 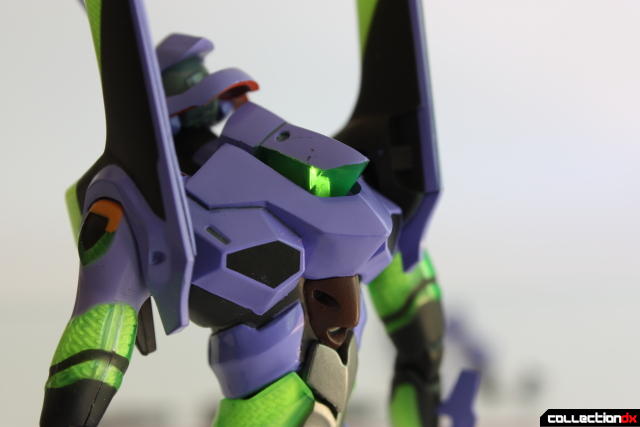 Overall this is a pretty good figure and I do really like the looks of it. To me the price-point doesn't seem right. The figure is lacking in accessories and gimmicks, somewhat small, and doesn't feel like a high quality piece. SEN-TI-NEL is a small company so they can't afford to sell it for the prices that some other companies like Bandai would. Evangelion is an extremely popular franchise and there are many other excellent figures available that can be had for less money. If you are looking for an Eva-01 I would recommend the SOC SPEC Evangelion. The SPEC is larger, more playable, has more gimmicks and tons of accessories, and has diecast. If you want an action figure get some Revoltech, or the Robot Damashii.

Despite my criticism of the figure, if you do like the looks of this figure and have to have it I would not hesitate to pick it up.

6 comments posted
this really SHOULD be a better toy, huh?

In theory, it should be interesting to see what a Studio Reckless Evangelion would look like. Their venerable record producing resin kits and the sculpts for Gundam Fix Figuration would suggest we were in for a new take on the Eva design. But this really seems like the same old thing.

And then, the head fin. I shuddered when I read about how it immediately broke on contact. This is the most obvious weak point on any Eva figure and there should be several ways to solve it. It seems like the manufacturers didn't even try here.

Really, I don't see what niche this is meant to fill... in small toys, we've already got several Revoltech versions, which are ultra-playable and almost unbreakable, and the Robot Damashiis, which have perfect anime style and are extremely expressive.

The overall "technical", detailed look of the figure, particularly that lovely textured green on the arms, may make this a better fit for some collections than the more cartoonish Revoltech and Damashii... but then those collectors may prefer the Movie Realization Eva or the Chogokin Super Eva from Evangelion Anima, which are more interesting redesigns.

but look what happened to poor Scopedog-kun

The only thing that made this figure appealing to me was the detailed pattern under the green parts. That truly is pretty awesome considering they changed color in Eva 2.0.

Beyond that, it's another pass for me.

The reason that purple armor on the chest opens up is because it's actually attached to the shoulder joints, not the torso armor. This is simply another one of those "animation magic" things that hasn't been built properly into any physical figure of Unit-01 yet.
(Another example would be how the utility wings remain parallel with the torso and don't move with the arms despite being wrapped around the upper arms.)

It seem to me nowadays toy companies have making Eva figures down to a science, and that any improvements they make are going to be minimal at best. This release is no different.