In commemoration of Saint Seiya’s 25th anniversary, Toei produced a new entry for the long-running franchise. Known as Saint Seiya Omega, this non-canonical series takes place in an alternate timeline after the Saint Seiya Hades Chapter. In this off-shoot installment, the torch has been passed on to a new generation of Bronze Saints, whose job it is to protect Athena and the world. Heading up this new group of warriors is Kouga, the boy that inherits the Pegasus Cloth, which seems to predestine the wearer to face the biggest threats of his generation. 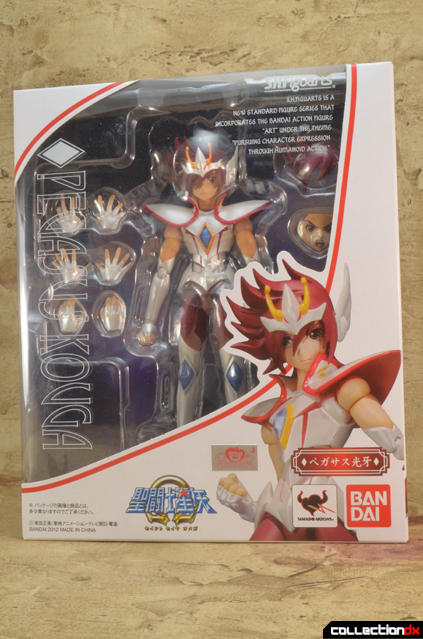 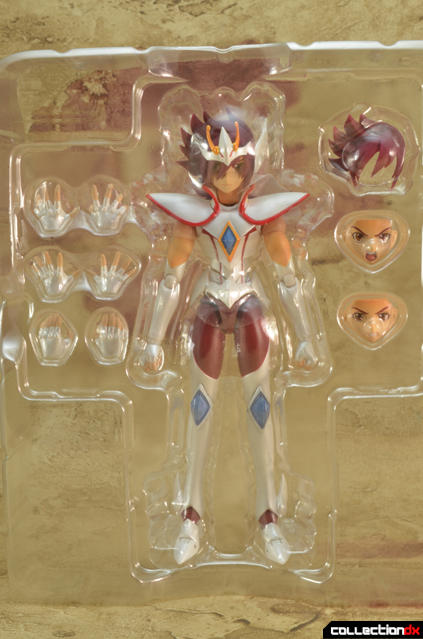 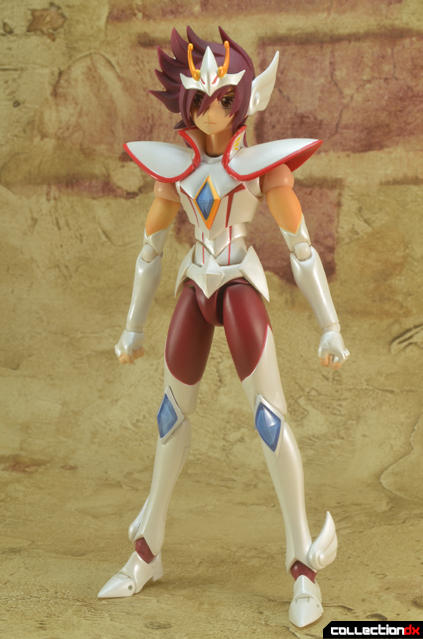 However, I think figure could have used some panel lines give better definition to the white parts of the armor. 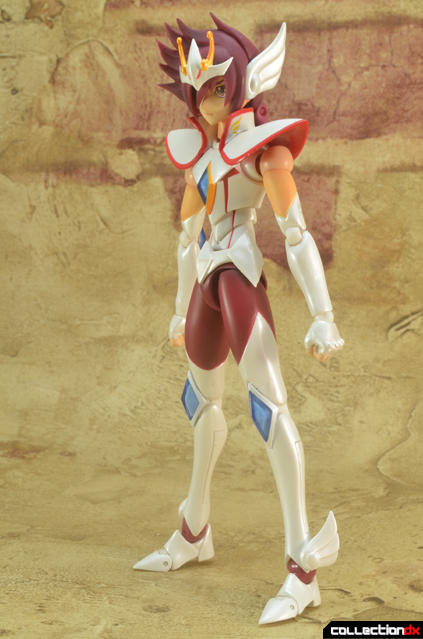 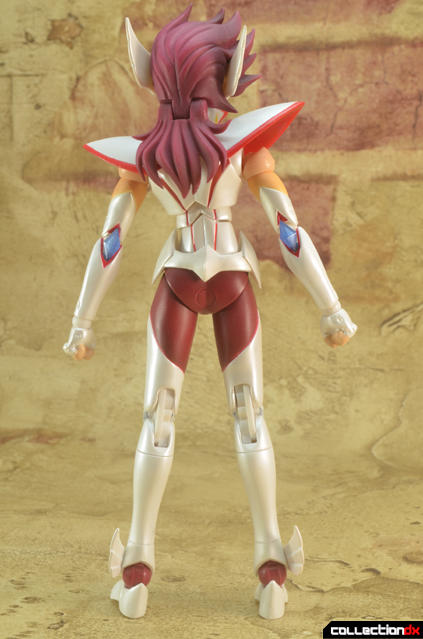 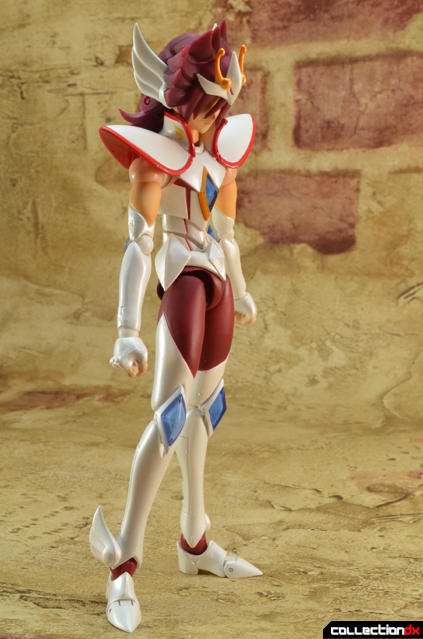 The slim build of the character is represented well in this plastic iteration. All of the details of the Cloth are present in the figure. The stones on the chest, knees and elbows are a unique part of the design that harkens back to the Cloth Stones, which are small precious stones that hold the Cloths of the Saints. 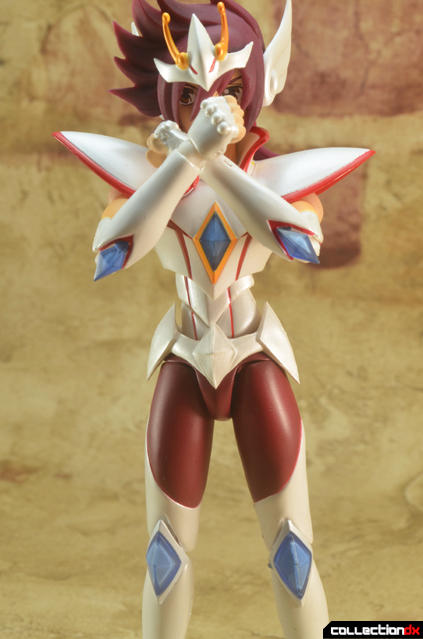 No more lugging around huge boxes filled with metal for these Saints! The crystals on the armor made of a clear blue plastic.

Bandai did such a good job with the detail, that they even made sure that the collar of the Cloth had the light . 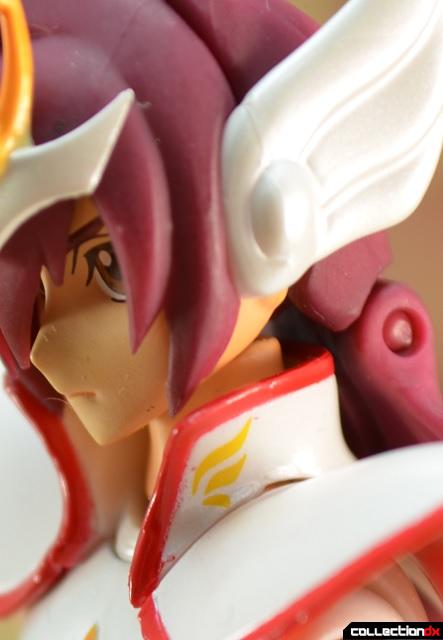 However, when you look at this figure close enough to check out this detail, it becomes apparent that the paint applications on this figure are not as perfect as they appear to be from afar. But then again, that is to be expected with mass-produced pieces such as this.

Another key part of the designs of the Saint Seiya Omega Cloths is the combination of fabric and metal. The white parts on the arms and legs are form fitting parts of the armor. 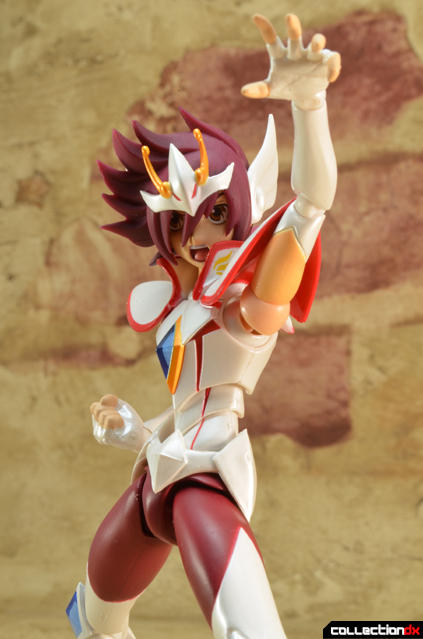 The main piece of solid armor on this toy is armor that protects the character's torso. In the show this part of the Cloth also appears to be somewhat form fitting, as if it was made from a highly malleable metal. However, on the toy it looks more like the midsection of an Eva unit. 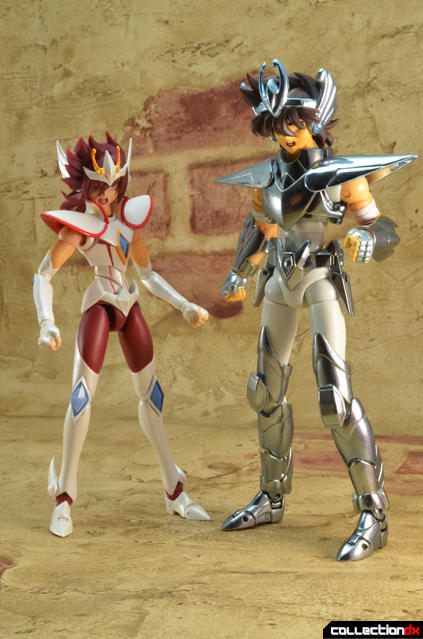 When comparing the Figuarts Kouga to a Saint Cloth Myth Seiya, we can see the design for Kouga's draws some of its looks from Seiya's Cloth. However, Kouga's Cloth is a lot more pointy that Seiya's, which has rounded edges.

As for the toys of these to Pegasus Saints, the Figuarts Kouga is much shorter and lankier than his predecessor; also, the body for Kouga feels a bit more fragile that the Saint Cloth Mtyh body and even the S.H. Figuarts bodies that are used for the Kamen Rider and Super Sentai figures. Being long-limbed, it would have been nice if Kouga had some metal in his feet to help keep him better balanced. But alas, his feet are made of a light plastic which does not offer the best support for this figure.

Beside feeling a bit fragile, two of joints on Kouga, the abs crunch and the waist joint are a bit loose. I will admit that the waist joint’s looseness might have been caused by me, since I popped the top half of the figure off this ball joint by accident as I was trying to remove the plastic protective sheet on this section of the toy. However, the abs crunch on the figure is loose through no fault of my own.

Another nitpick I have with this figure, is the fact that there is a gap underneath the neck of the figure. In order to hide it, the head and neck must be tilted forward most of the way. 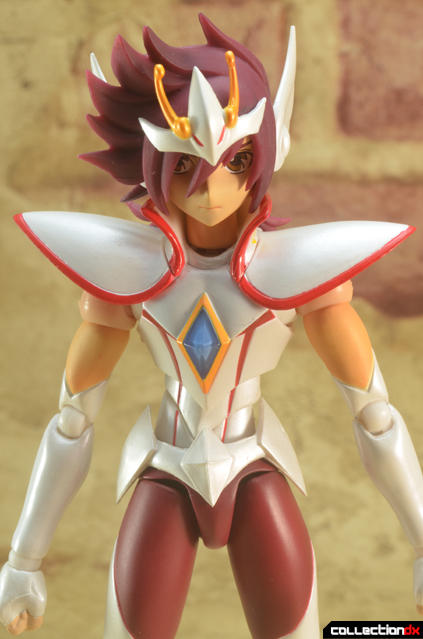 The S.H. Figuarts line is known for being super poseable and Kouga is no exception; it has the usual double jointed knees, bicep swivels, toe hinges, etc.

So Kouga can do all sort of things.

He can take a knee. 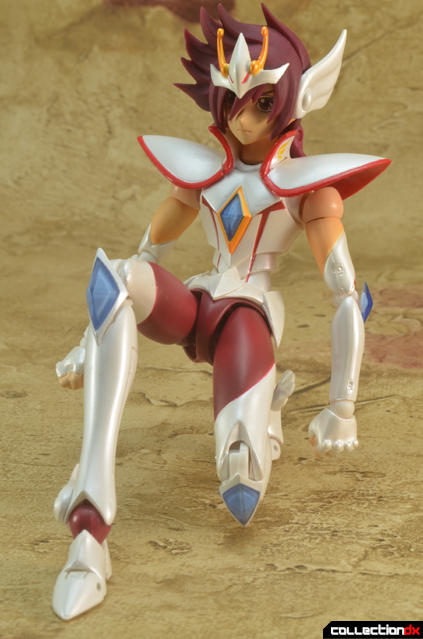 You know, for when Athena shows up. 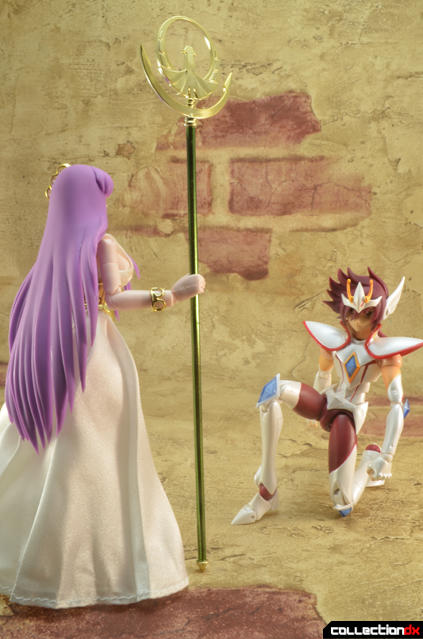 He can jump at his enemies. 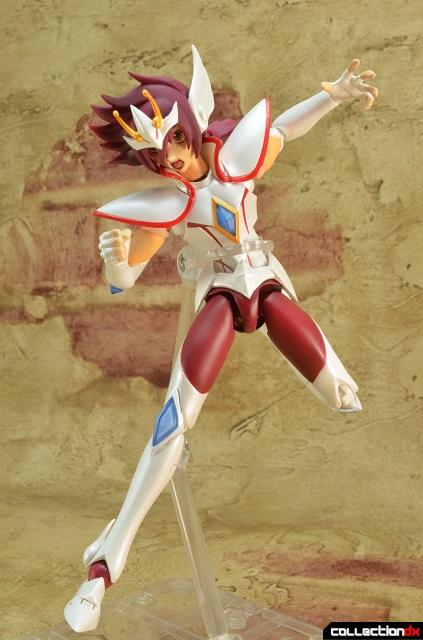 Do a cool sweeping pose. 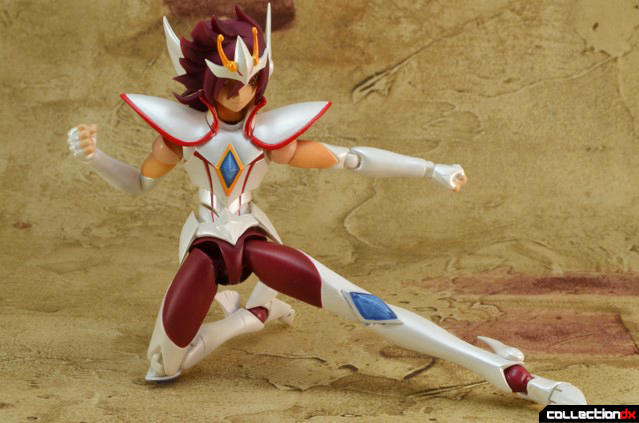 Heck, he can even breakdance if he wants to. Word! 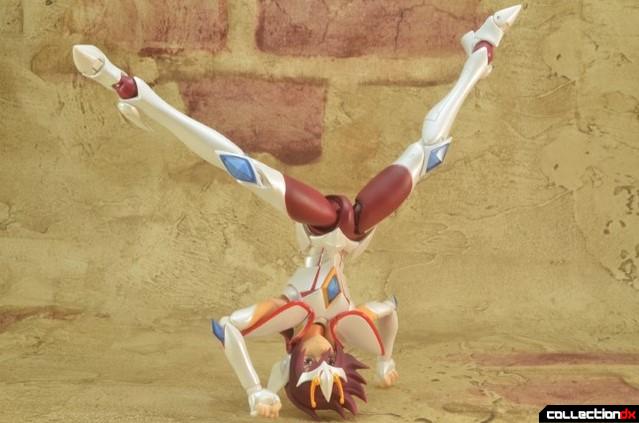 Lastly, he can also pull off the signature attack of the Pegasus Saints, the Ryuseiken. 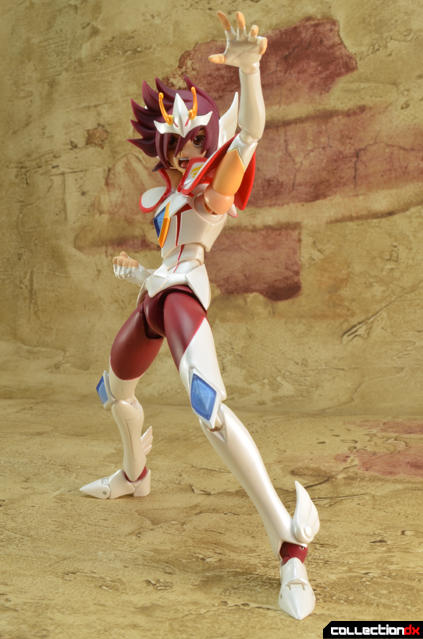 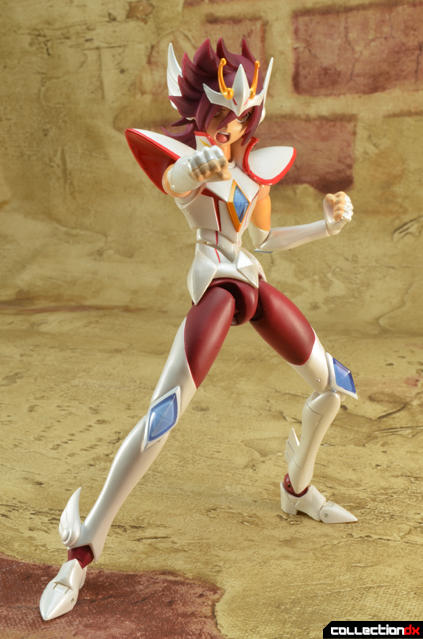 The hair on the back of the figure can move up, to allow the head to move more freely. 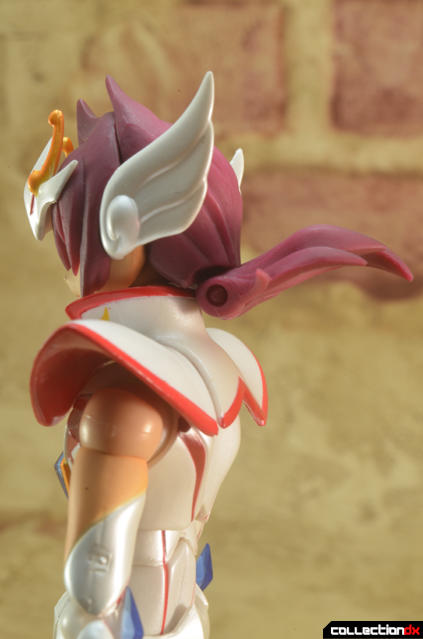 As I mentioned at the beginning of the review, this figure comes with 3 different faceplates. These can be swapped out by removing the front piece of the hair. 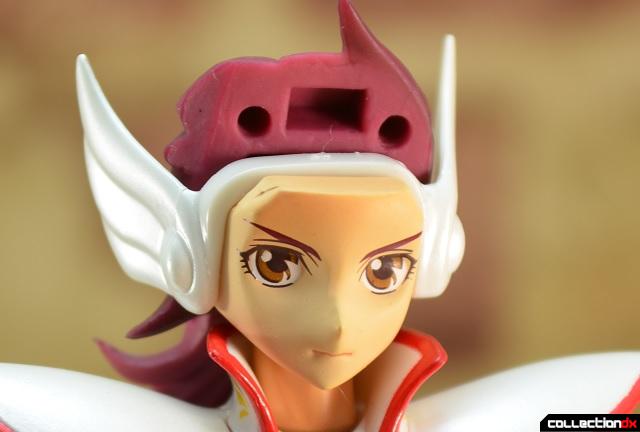 The headpiece can also be removed and an alternate front hair piece can be used to display Kouga without the headpiece. 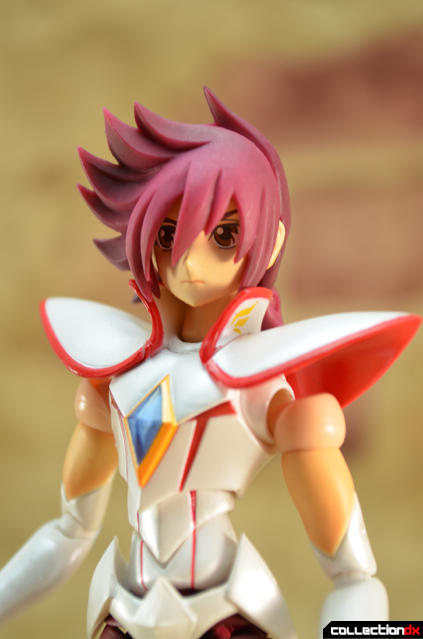 Besides the serious face and the screaming face, which I used for most of the shots, also included is a faceplate with Kouga gritting his teeth. This can be used as the ‘”struggling during a fight” face… 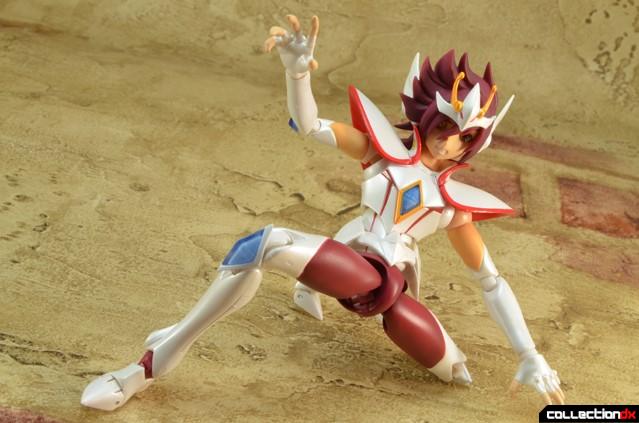 Or as the “Shouldn’t have had them tacos from Soma’s taco stand” face. 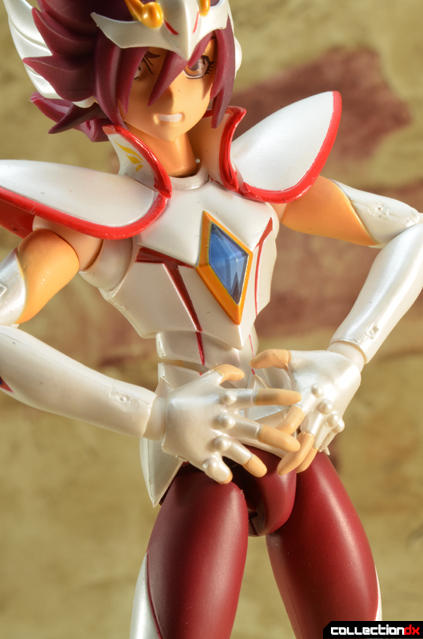 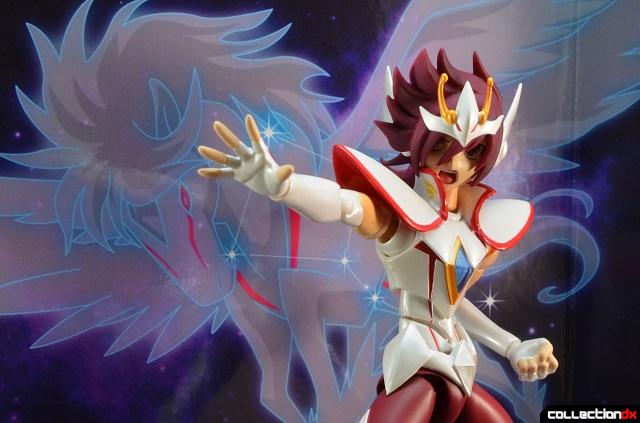 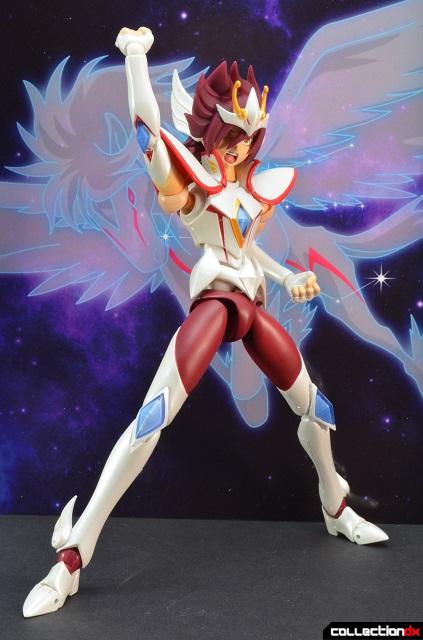 Thank you for the kind words good sir!

It's always friggin excellent to see Umakoshi's art style in any medium.

Some how it works just as well in 3D, as this figure is kinda gorgeous.

I would love for Bandai to do something with his design for Casshern Sins. On a side note, Casshern in that series looks quite a bit like Seiya.

haha. On a side note to the side note, Casshern was voiced by Toru Furuya( the original voice actor for Seiya) in Sins.