You guys might now me, as my user name implies , as the guy who does Saint Seiya and Super Sentai reviews (and some  Kamen Rider reviews also, but I couldn’t work that into a punny user name).  In between my love for Saint Seiya that began when I was a child living in Mexico and my new-found passion for Tokusatsu shows, another show reigned supreme in my life: Mobile Suit Gundam. I fell in love with the franchise when I watched Gundam Wing, only to quickly realize how below average Wing was compared to the rich history of the Universal Century setting.  For a while I was big into Gunpla (in terms of adoration, not necessarily skill). Then, after there was a fire in my house, I was left with smoke-damaged Mobile Suits and half-melted beam sabers. I thought I could live with these newly battle-damaged Gunpla. Then our insurance company told us they were going to clean everything we owned, to minimize what they had to pay to replace.  Months later I got my Gundams back, mostly clean, but taken apart. This would be no big deal, had they individually packaged each one as they cleaned them. Instead, they gave me a couple of large Ziploc bags packed with hundreds of parts from various models. After that heartbreaking experience in my life, I have pretty much stayed away from Gundam toys… until now that is!

The Nu Gundam, for those who do not follow Universal Century Gundam, is the mobile suit that Amuro Ray, the ace pilot of the One-Year War, piloted during the events of the Char’s Counterattack theatrical film. The Nu Gundam was built as a collaborative project between Amuro and Anaheim Electronics, the civilian mobile suit manufacturer that supplied arms to the both Neo-Zeon and the Earth Federation.

Taking a peek at the Nu Gundam through the window in the box made me excited at the prospect of handling my very first Robot Spirits Gundam. 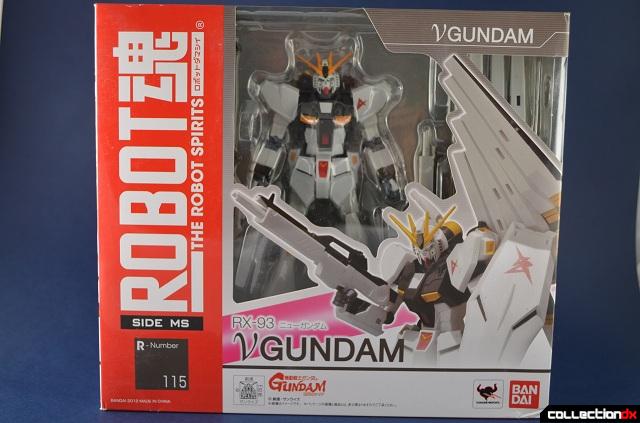 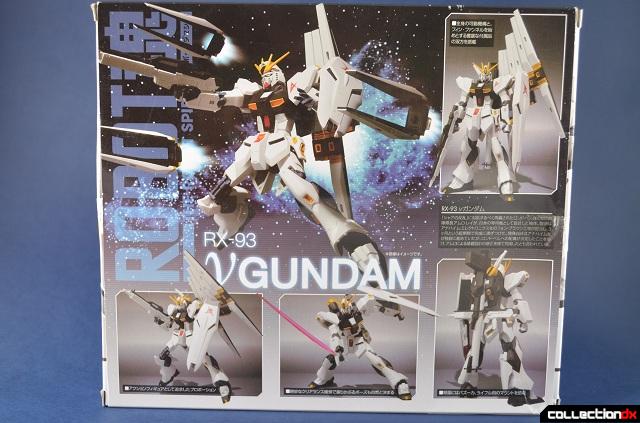 Hi Nu-Gundam-san, I am going to play with you, and play I will because he comes with plenty of stuff! 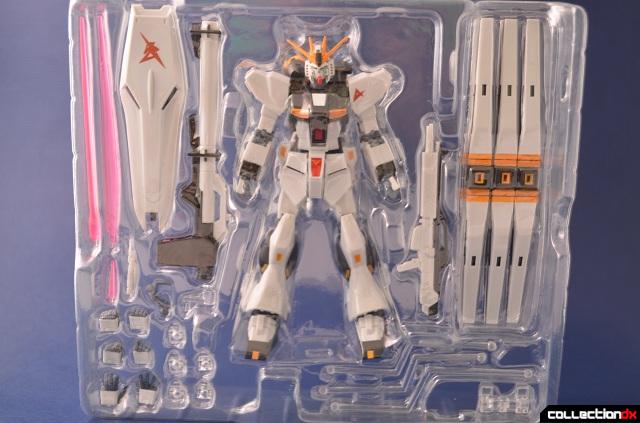 Char’s Counterattack takes place after Z and ZZ Gundam in the Universal Century timeline. The design for the Nu Gundam, however, is more akin to the Gundam Mark II than the transforming Zeta and ZZ Gundams. 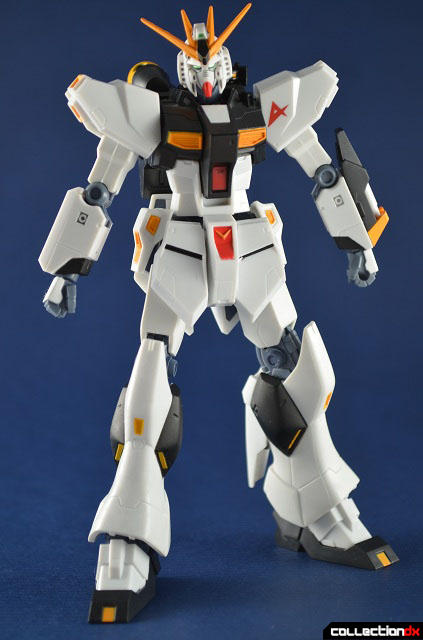 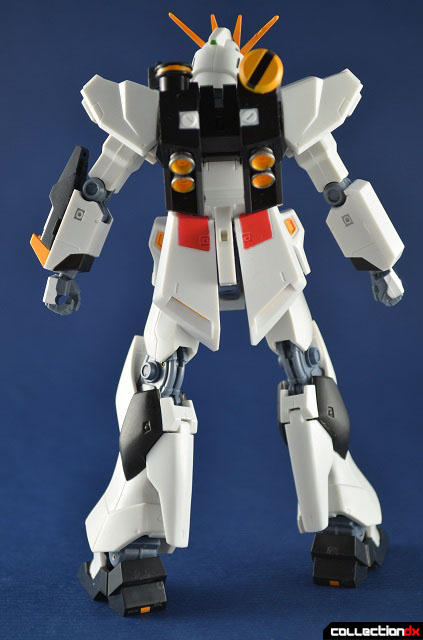 Immediately upon handling of this figure, I could tell figure it was designed with mobility in mind. The front skirts can be pulled up all the way to allow the Nu Gundam’s legs to move forward without the skirts restricting them. 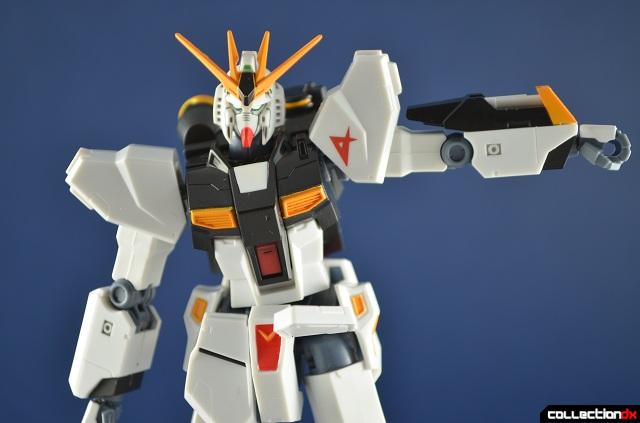 The shoulder armor can also be moved up substantially to allow the arms to be raised. At the rear of the figure, the skirts can also be move upwards, though not as much as the front skirts. 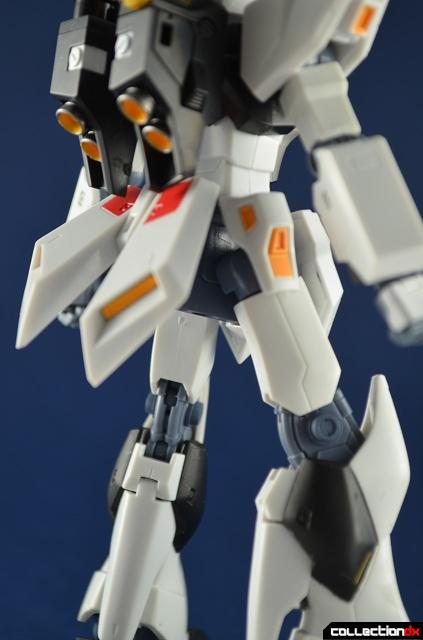 The Nu Gundam also comes with a clear adapter that attaches to a Tamashii stand. The end result is that the Robot Spirits Nu Gundam can pose really well on or off the ground. 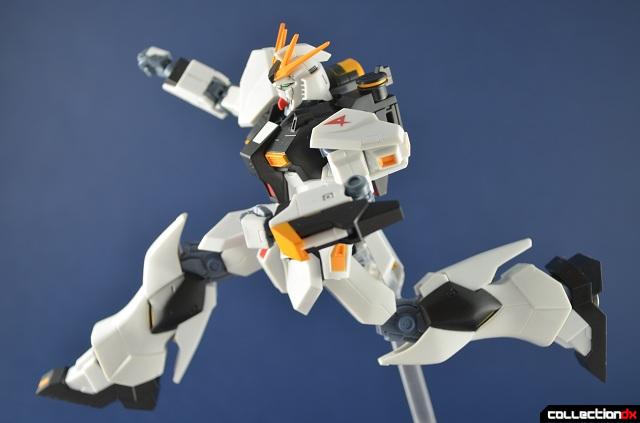 Though not a feature meant for lessening the restriction of the Gundam's movement, the back panel of each leg can be raised to reveal a booster. 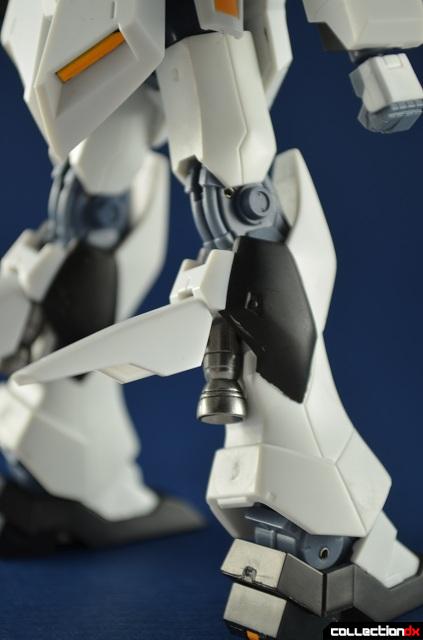 The joints on the knees are super tight, causing them to squeak when the legs are moved. On the flipside, the tight joints do allow the figure to hold its poses superbly.

Hidden in the left hand is a standard beam saber. 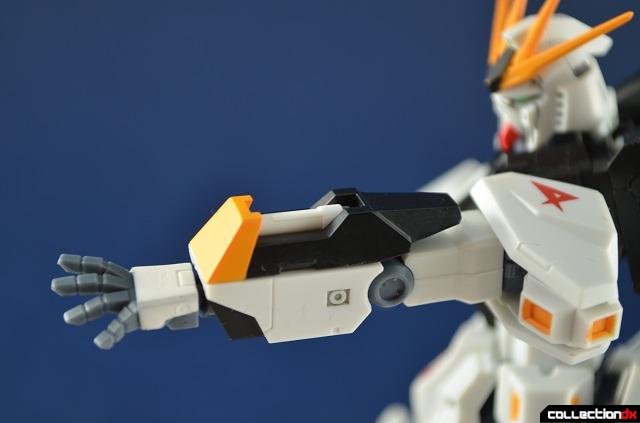 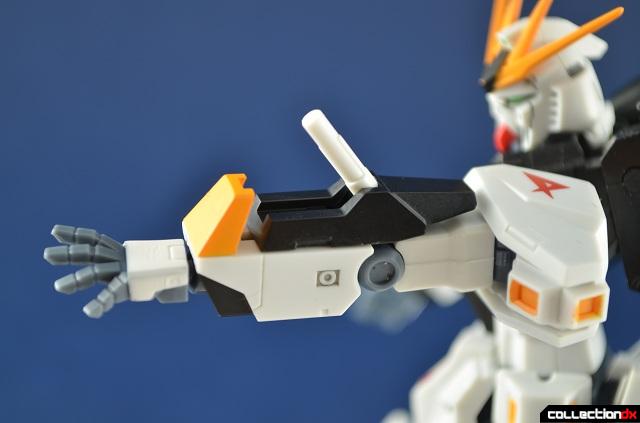 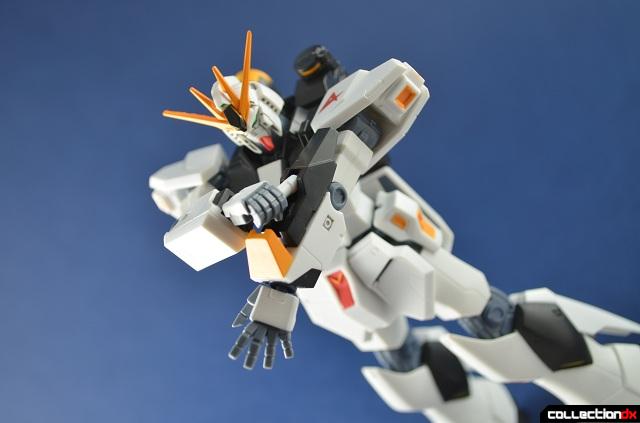 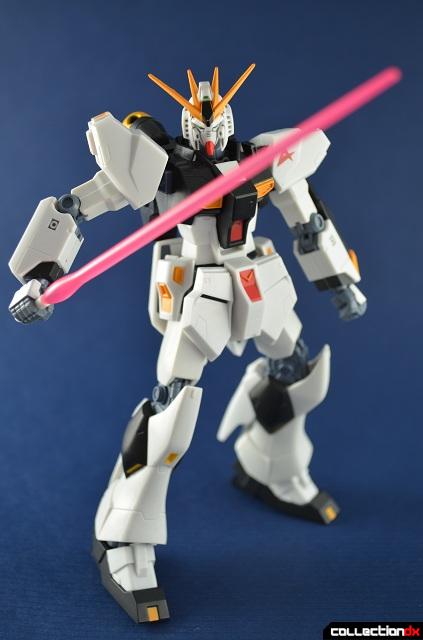 The backpack also houses a higher-output beam saber, which can also extend a small beam blade from the bottom. 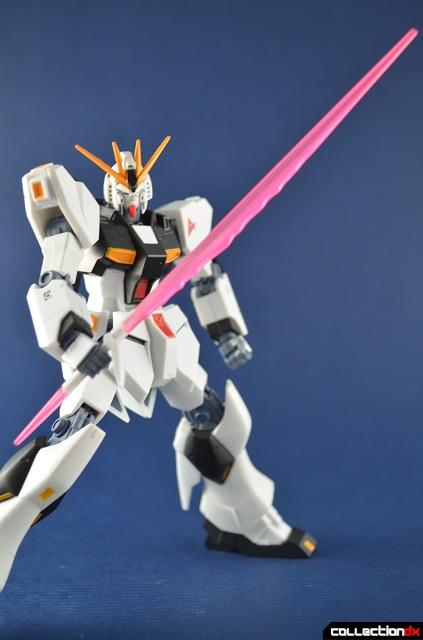 This hidden feature of the beam saber never actually made an appearance in the Char’s Counterattack movie. 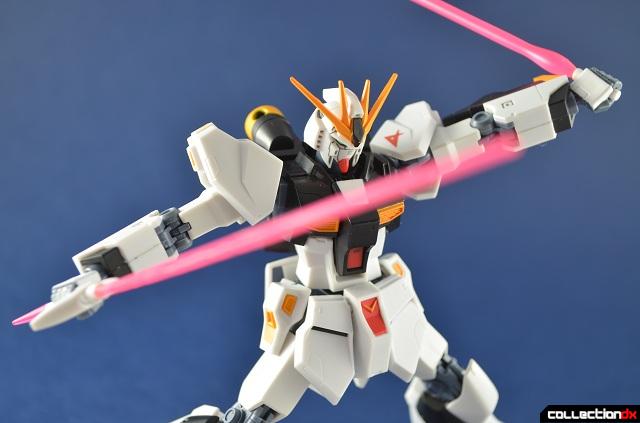 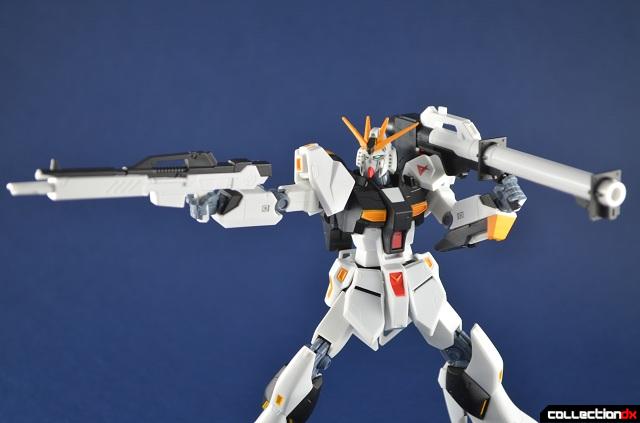 Both of these have tabs on their bodies that allow them to be attached to the Nu Gundam’s backpack. 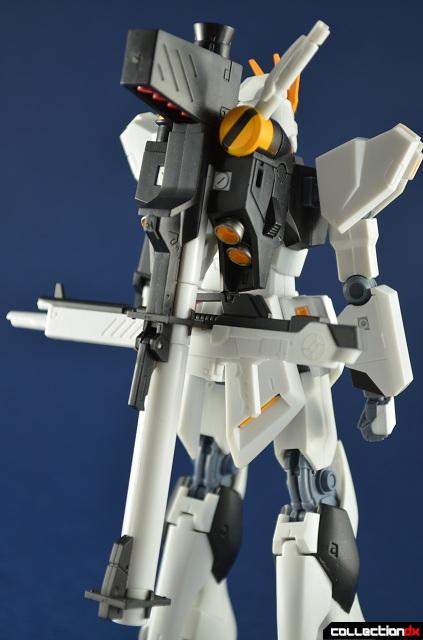 The Nu-Gundam is also equipped with a custom shield that bears Amuro’s insignia. 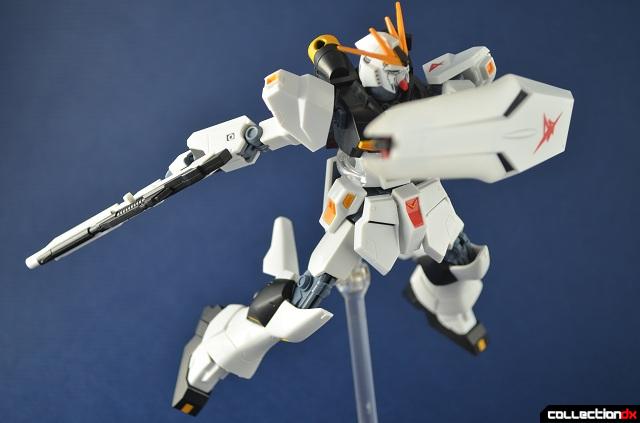 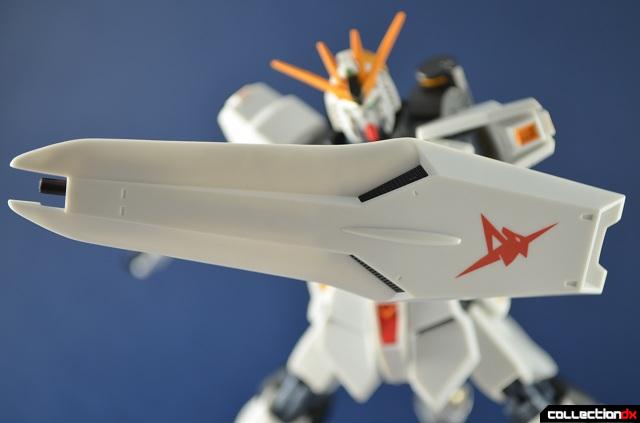 Even this defensive instrument doubles as a ranged weapon, since it houses a missile launcher and beam cannon on its underside. 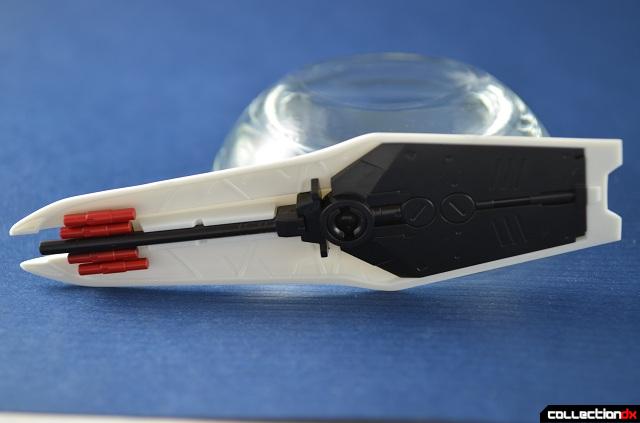 Of course the Nu Gundam just would not be complete without its signature Fin Funnels. 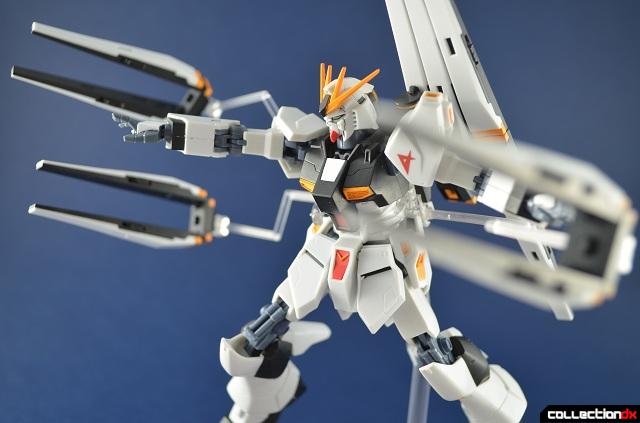 This release comes with six funnels, but can be expanded with the upcoming Fin Funnel Packs.  These Fin Funnels attach to each other through a series of slots and pop-out tabs present on the side of the funnels.  The Fin Funnels can then collectively be attached to the back of the Nu Gundam’s backpack. 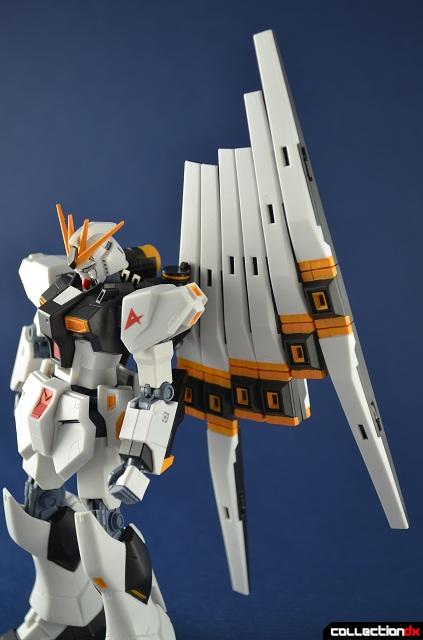 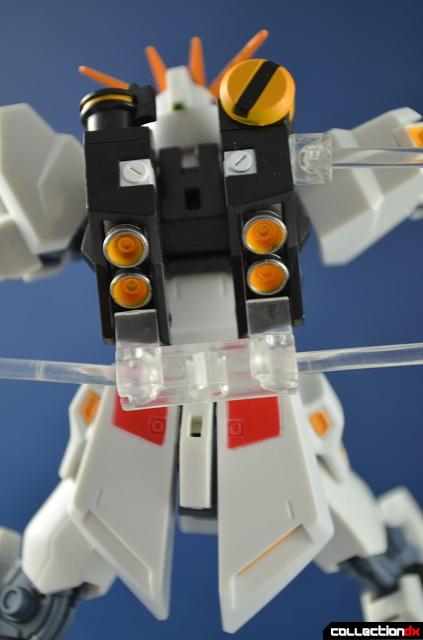 The fit between the ball of the rods and these three connection points is super tight. On several occasions, I was afraid I was going to break the clear rods because I was putting lots of pressure on them without getting the ball to budge, yet the rods began to bend. 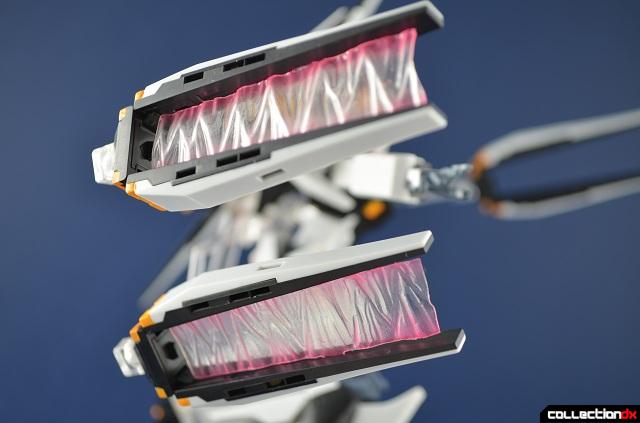 To simulate the Fin Funnels readying to fire beams, Bandai included three thin plastic energy effect pieces that plug into slots on the interior parts of the Fin Funnels. 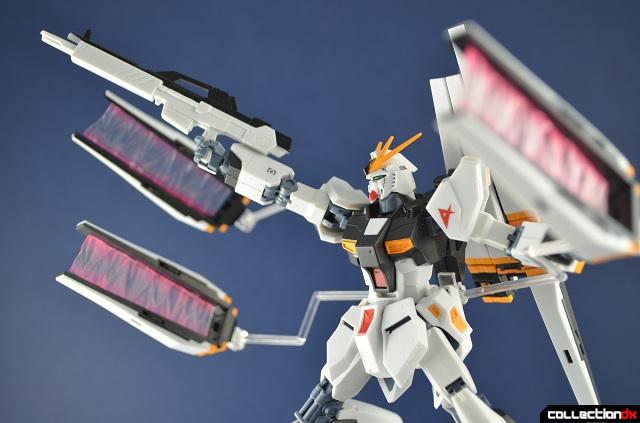 Pro-tip: Use a stand when attaching the effect beams to the funnels; it makes it easier to get this accomplished, since it is a chore trying to hold the Gundam and get the slots on the funnels to align with the tabs on the effect parts.

In the movie, the Fin Funnels could also be used to create a beam barrier for the Nu Gundam.  The Robot Spirits Nu Gundam does not include parts to simulate this defensive move. Bandai is releasing a parts pack for those who wish to create their own Beam Pyramid. 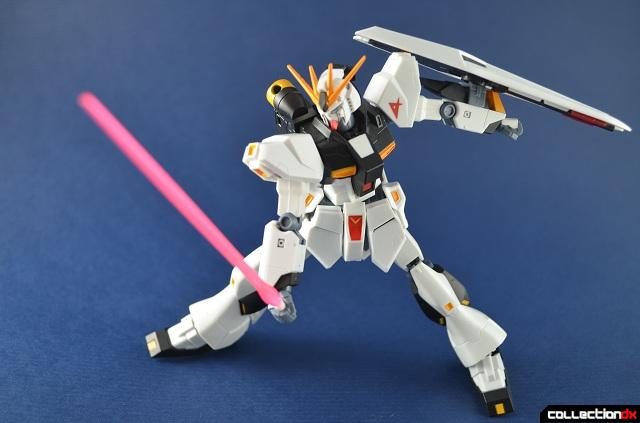 I really, really like this iteration of the Nu Gundam. It does an excellent job of blending articulation and anime accuracy. The content of this release was satisfying and devoid of filler pieces that served very little purpose. It was refreshing to see that the Nu Gundam was packaged with the right amount of hands, unlike some other figures.

My fears of this line being truly awesome have materialized while playing with the Nu Gundam.  Looks like Bandai is going to be taking more of my money from now on. Time to find a second job or sell a kidney so I can add this line of Gundam offerings to all the stuff I already buy from Bandai.

A special thanks to Blufin Tamashii Nations for providing this figure to review and for getting me hooked on the Robot Spirits line.

im glad this site is so up wit te latest releases. whhen i saw this figure coming out i ordered i and happliy received it. its a great figure. there could have been a bit more work on panel lining the suit, weaponry and thrusters. the head being the only part panel lined seems odd. my figure also had the problem with hte clear rods and mounts for the fin funnels. mine are close to snapping off at the base. not cool. i love this figure and recommend!

I agree. I noticed the absence of the panel lining when I first looked at the figure. I was going to write about it in the review, but then I fell in love with the figure and the articulation so I forgot about my initial impression of the figure. The body would have definitely been a bit more defined with the panel lines. Still a great figure nonetheless.

You could always go and fill in the panel lines with a thin gundam marker.

I had the exact same thought! Though I would have to dig up my fine-point makers from years ago and hope they still worked.

Nice review. I like the new hardpoint on the back for the beam rifle, something this design badly needed.

Actually the Beam Rifle just has small tab sticking out of it that attaches to the back of the Gundam. It is actually a bit different from the Hardpoint system that is present on some of the other Robot Damashii figures. Regardless, it is still a welcome addition to the toy.

A very good review, I also had trouble with the fin funnel stands being extremely tight, and I was scared to death I was going to break them in half. I also had troubles with some of the Fin Funnels not wanting to attach to one another, though it was somewhat mitigated by switching them around a bit. The three markings on the face(not sure exactly what you call them) seemed a bit undersized to me, but I've gotten used to it. I think this easily the best incarnation of Nu Gundam as a model or toy we've had to date. Now we just have to wait for the release of it's counterpart, the Sazabi in this line.

I know what you mean, I had that issue with one of the Fin Funnels, but I thought it was just a faulty one. I can't imagine how much of a pain it would be if all of them did not want to attach to each other.

I definitely can't wait for the Sazabi either. I may just pick up its successor, the Sinanju, to tide me over until they do release it.

Nice review. I have this one also, and has preordered the pyramid special effect. Are you going to review Unicorn Gundam too since you are going to pick up Sinanju?

If everything goes according to plan, I should be reviewing the the Unicorn Gundam ( Unicorn mode) in the next couple of weeks, after I do my next Saint Seiya review. If I like Unicorn mode enough, I will probably also review the Destroy mode.