Knock Out is of a rare breed: it's a Decepticon automobile. In the Transformers Prime cartoon, Knock Out is the Decepticon medic and despite being aligned with the “bad guys” he has a sadistic appreciation for the Earth-made automobiles

I picked up this guy because I liked the car mode and the art made him look like a cool character. Unfortunately I ended up getting a merely average Transformer.

In vehicle mode, Knock Out is a red sports car (maybe a Nissan?) with some odd paint apps and blacked out rims. I thought the lack of paint on the rims was a design decision with Rumble, but now I'm not so sure. Maybe they are just being cheap? We'll never know. 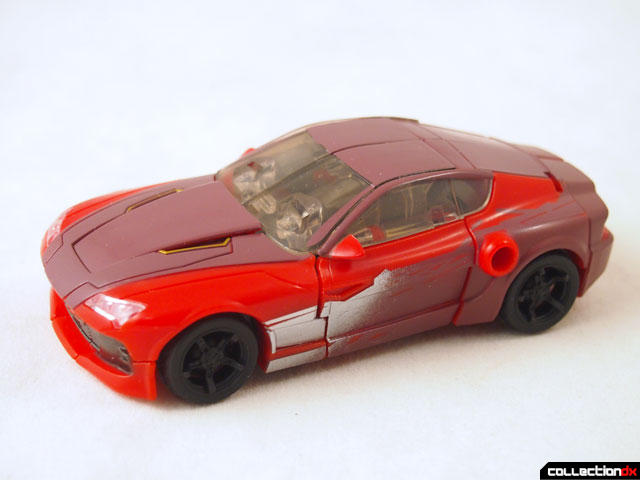 The windows and headlights are clear plastic, the rest of the details are paint. The paint job on the car is meant to be sleek and sporty but it seems incoherent. At least the paint is sharp. 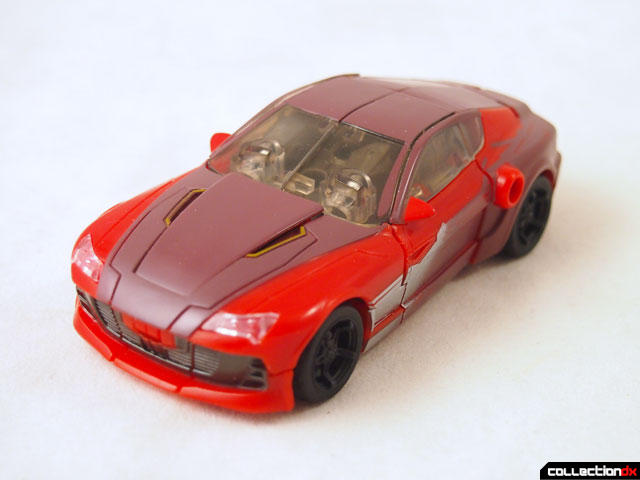 The rear quarter panels have 5mm ports in which you can attach the weapon, a spear that separates into two parts. More on the spear when we talk about robot mode. 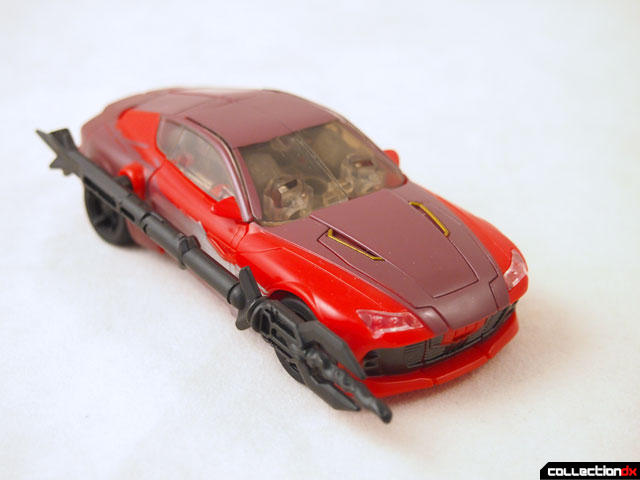 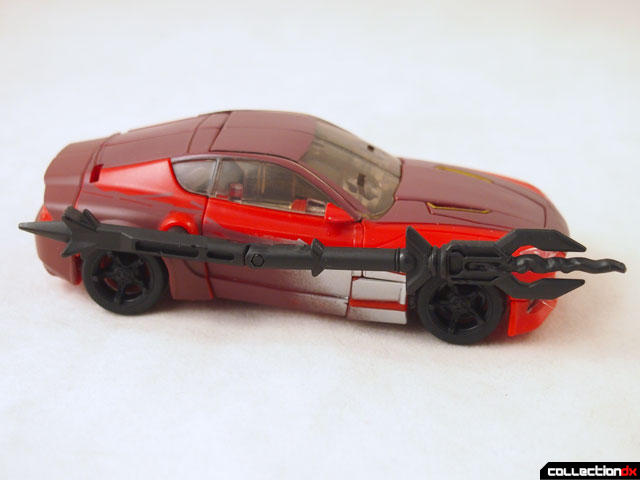 Transformation is both simple and frustrating. The legs are amongst the simplest transformations I've seen in a deluxe class toy, but the chest area is needlessly complicated with odd tolerances. The arms fold out in an interesting fashion and the chest flips down. In this process the head is supposed to pop up but there is simply not enough room for it to flip up on its own; it needs to be coaxed. 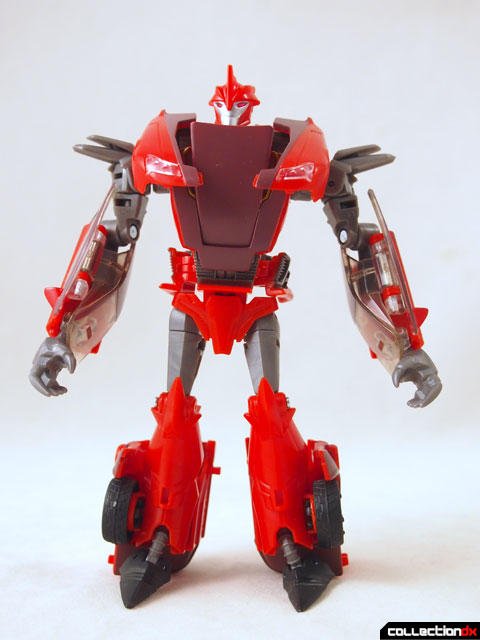 Robot mode is lanky but it stands well enough. The arms seem rather long. I keep thinking the side windows on the arms should flip in, but they don't. The parts on the hips do not like to stay plugged in much. 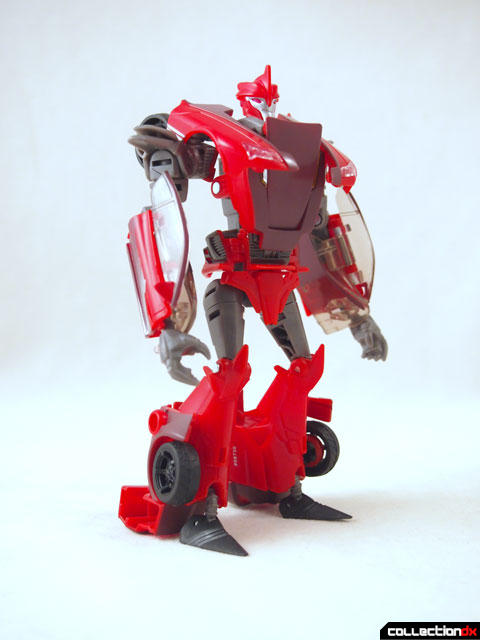 From the side he seems a bit hollow. The instructions don't make it clear where exactly the chest parts are supposed to rest, and if you look online everyone has their own opinion. 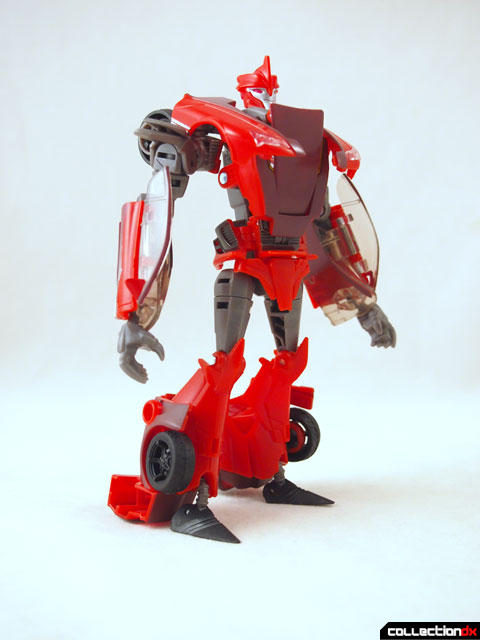 Articulation is decent and relatively standard for a Transformer of this size. 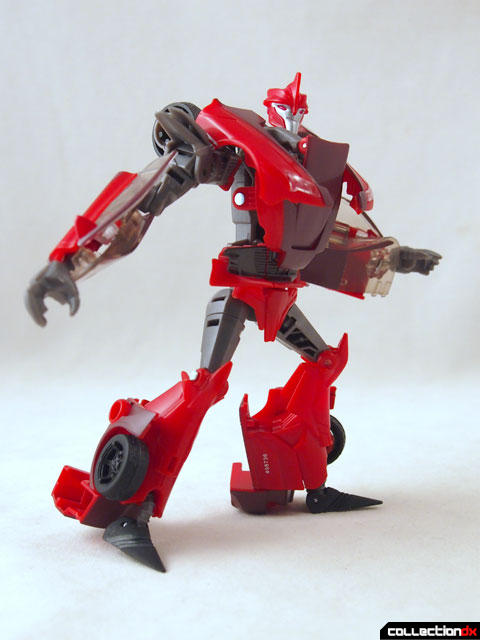 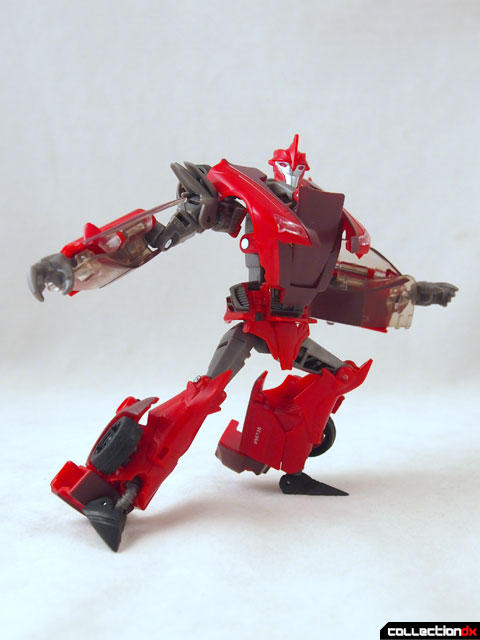 The weapon is really crappy. As I mentioned before it's a two-part spear that can be attached to either hand. The tolerances are pretty tight and each time you try to get the combined spear in a hand it separates in two. 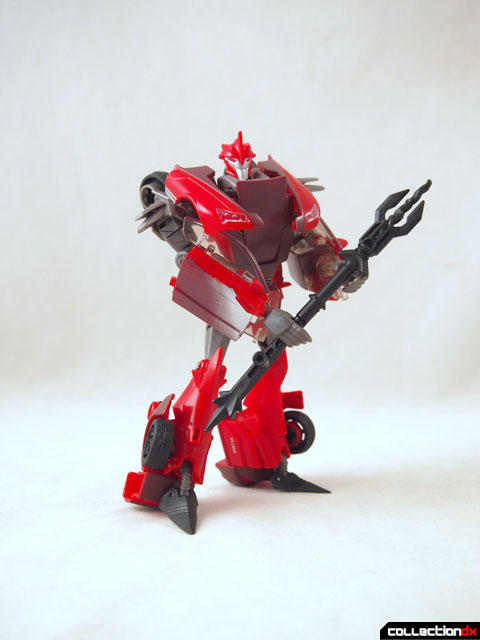 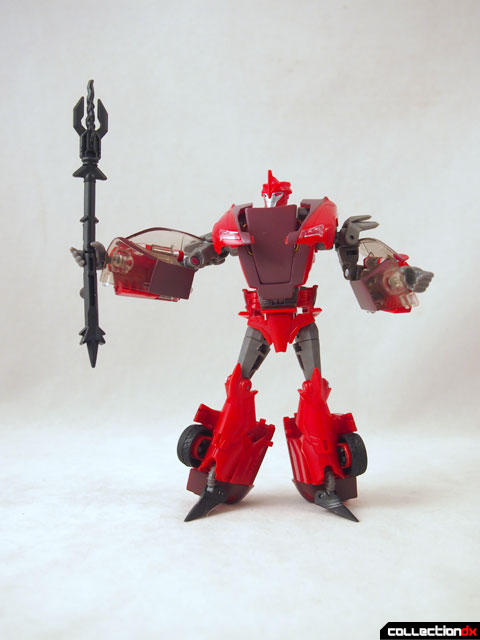 The solution of course is to put one portion into each hand. It doesn't make for effective weaponry. 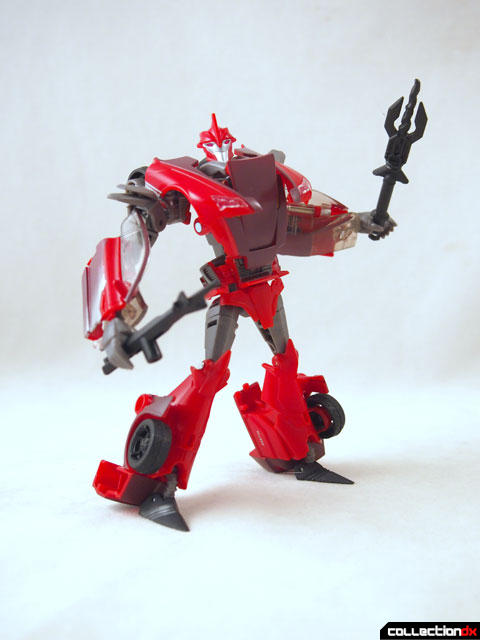 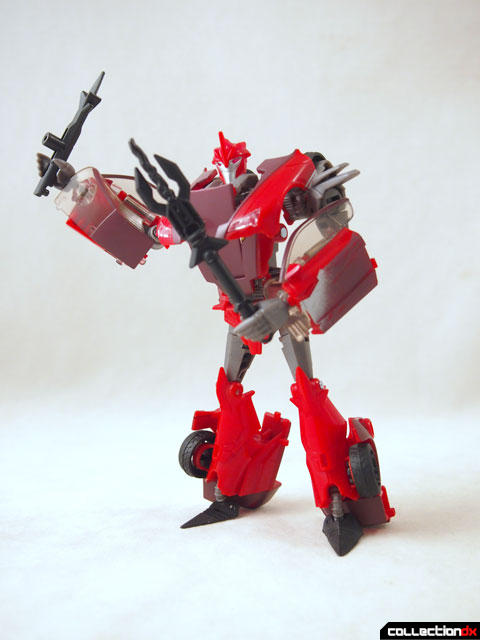 Overall, it's an average Transformer and probably only for diehard Tansformers fans or completists.

This is such a crap figure. Whats worst is that it was repainted and only slightly retooled to be Smokescreen, who looked like he would be a great toy. I think the whole Prime line has only gone downhill. Between the plastic quality, and paint apps, I have to say its all about profit at this point. Unless you find them on sale, or at Aldi you get a small figure for $15. There are only a handful of figures worth grabbing out of the whole line. And don't get me started on this whole Beast line they have coming out.

I don't know what transformers did but the line has totally lost my interest. All of the issues that people hated about the robot masters line is being tolerated now. Hasbro even skipped robot masters. I see big vehicles for GI Joe and star wars and the marvel sentinel/ galactus mold is twice as dense as hockey pucks. Takara is mostly to blame. Even the masterpiece toys are terrible now. They feel like a paint job with no toy inside. Just terribly thin, ick plastic. Mp-10 has more limited articulation, no pistons, no metal, no gimmicks, no lights, the knees are a joke compred to the original. Last shot has a worse meaning every day.

Agreed. Its been a painful time since the end of the movie and associated TF lines, as figures have shrunk, lost paint and plastic quality has dropped off. There are exceptions, but the 'bang for buck' has taken a serious hit across most TF lines (and dont get me started on a rant about the MP lines, as a huge fan of the initial MP output owning more than my share of MP Seekers).

As for the wheel rims, this is almost certainly a cost cutting measure. Many thousands of electrons have been sacrificed in the wailing of this, as the show model has very distinctive yellow wheel rims.... and a pretty much totally different red deco.

Ugh...this toy. People keep telling me "Oh, he's a really nice toy. Get him." but I just cannot get past how awful it looks. For a character so obsessed with looking good its really kind of ironic he got a toy that looks this bad in both modes. (at least in my opinion)

A shame too.. He's one of the few Prime characters I'd have wanted to pick up if he got a nice toy.

He definitely isn't the best of Prime, but I can't say he's the worst either. I'm looking at you, Airachnid..

Knockout looks heaps better when he is transformed properly. Still not an amazing figure, but having it transformed correctly does remedy some of the 'meh'.