I don't know a whole lot about Kamen Rider ZX. To me, he's just the Kamen Rider who is a ninja and doesn't really have a TV series. With that in mind, he's one of the less interesting Kamen Riders out there in a world filled with feral riders who will eat you, and kung-fu astronauts riders. Despite that, I couldn't deny that I was still quite intrigued by the SIC take on the ninja Kamen Rider.

SIC did an excellent job of taking the ninja aspects of ZX and exemplifying them throughout his sculpt. He looks sleek, lean, and fast while still maintaining a muscular body. 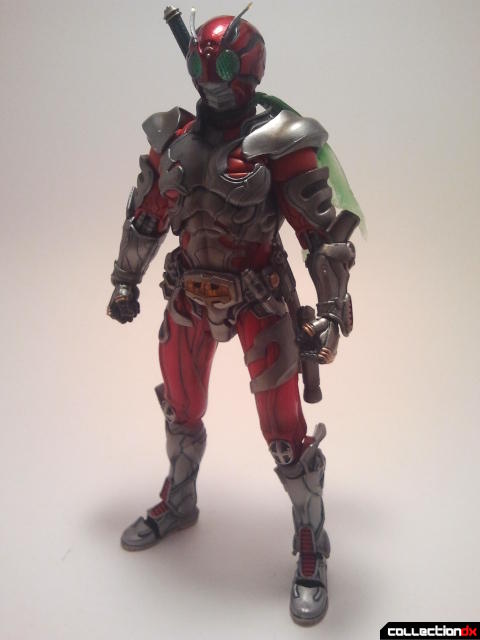 The original ZX design has a bit of asymmetry going on, and the SIC exaggerates these to the next level. I particularly like how each the left shoulder plate juts out slightly more than the right. 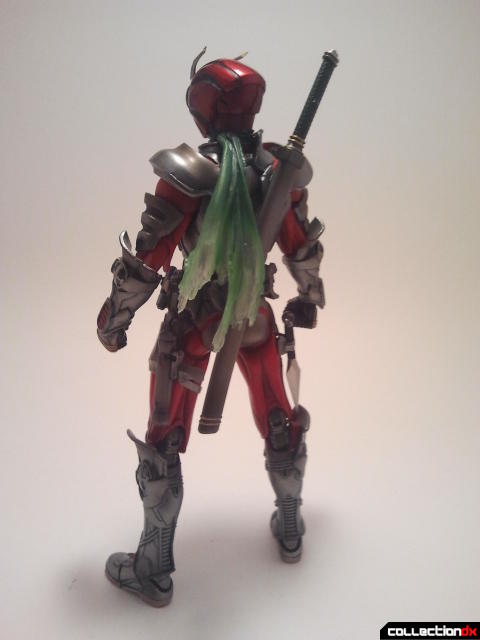 Although the majority of the body is done in a flat but effective red, ZX's helmet is a vibrant and striking metallic red. The head is a little bit smaller than other SIC Rider heads, but the proportions still look right despite the slight reduction in size. The green eyes really pop against the red paint. 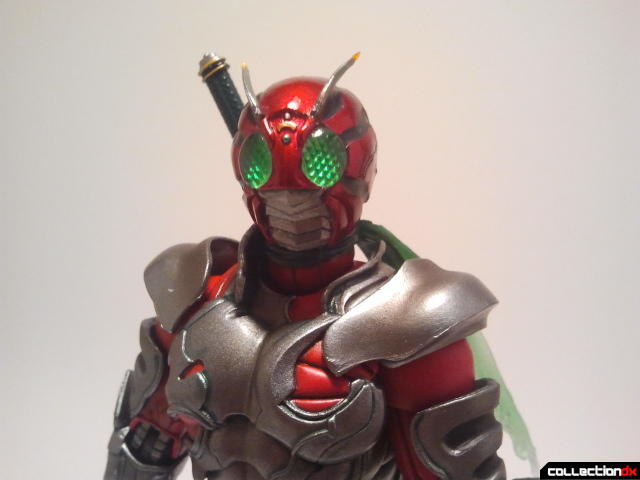 ZX's belt is loaded with ninja accessories! Like explosives, Batarangs, more explosives, and what I can only assume is a flask right at his right side. There's also a handy removable kunai on his right thigh, along with a maglight on his left thigh that pegs in place. It tends to fall out pretty easily so I prefer to just leave it off. 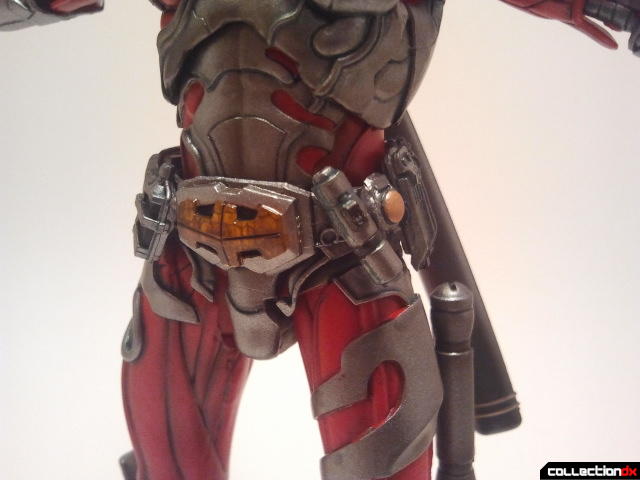 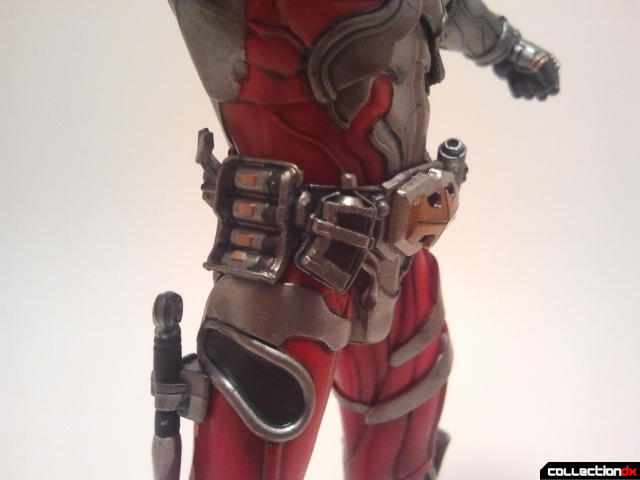 ZX continues the trend of well articulated SIC figures. His chest section is slightly limited again, but unlike Super 1's, you can actually get a little bit of wiggle in there. 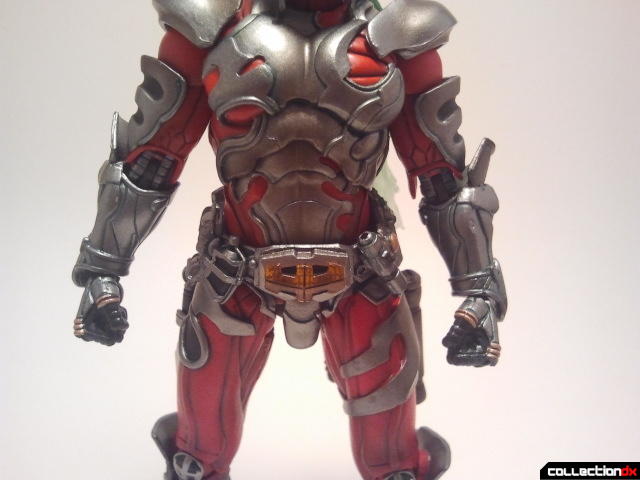 Unlike other previous SICs, ZX has a bit of a smaller head in tandem with a thicker neck. This neck piece is actually double jointed and allows for a fantastic emotive range of articulation.

Kamen Rider ZX's diecast content is mostly located in his feet which are entirely metal. This makes ZX quite stable and posing him an absolute joy. 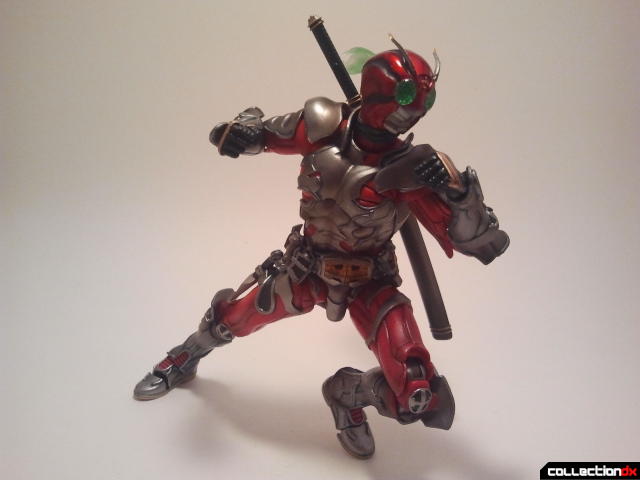 There are only two points where ZX's articulation disappoints. First off, his toy joint is superfluous. It barely even moves and is useless in posing. The second is his scarf, which only pegs in. The additional hinge joint used in previous SIC figures would have been nice.

Like any good ninja, ZX comes with an array of hands and weapons at his disposal. The first weapon he includes his the kunai that is clipped in place on his right leg. ZX has a specific right hand for wielding the kunai. The weapon fits in snugly and looks sharp. Too sharp, in fact. The tip of the kunai is very thin plastic so the tip easily warps and bends. 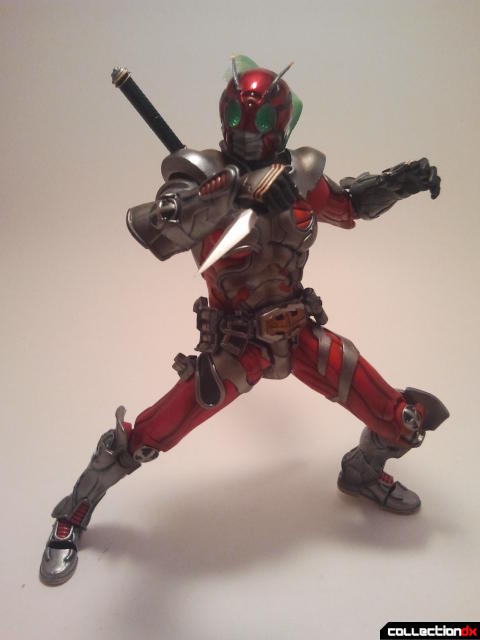 ZX also has a specific left hand for his two accessories. This is basically the “I'm going to throw something at you”-hand. You can fit a shuriken along with a tiny grenade in the hand and it easily fits in place. 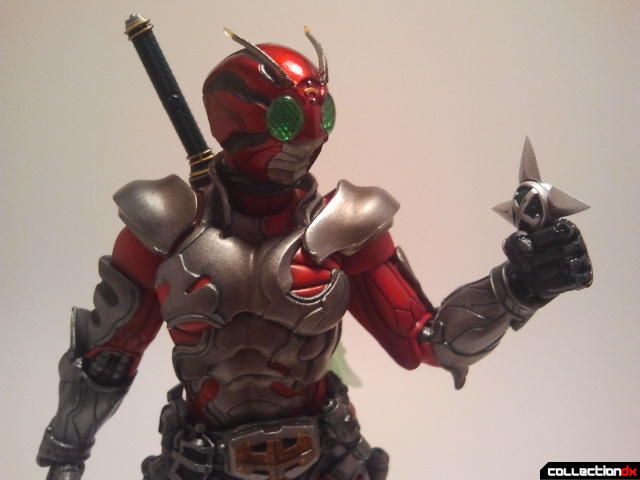 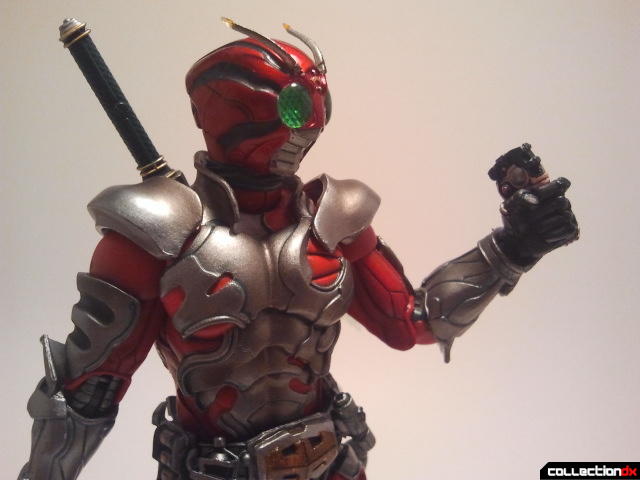 In case point objects and explosives don't do the trick, ZX has one more long ranged weapon at his disposal: a chain! The chain is actually diecast and is quite shiny. Although it's a cool weapon, it's a bit difficult to pose ZX doing anything dynamic with it due to the lax nature of the metal chain. 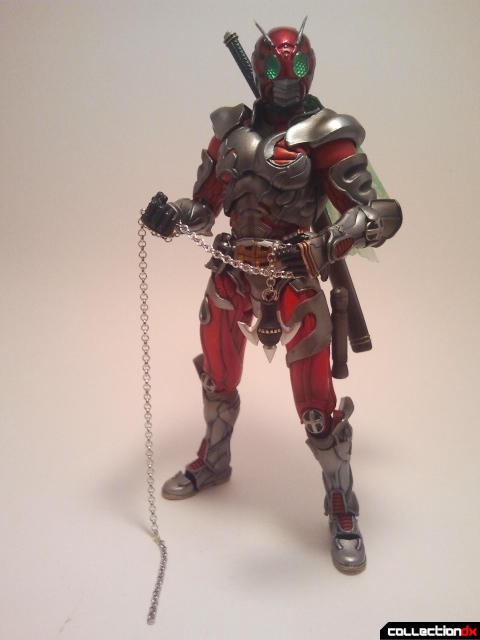 ZX's main and my favorite accessory is his katana. I mentioned before that ZX doesn't have much for diecast content. I can easily over look that though because ZX's sword is made ENTIRELY OUT OF METAL. It's heavy, well detailed, and you could easily stab someone with this thing in the best sort of ways. 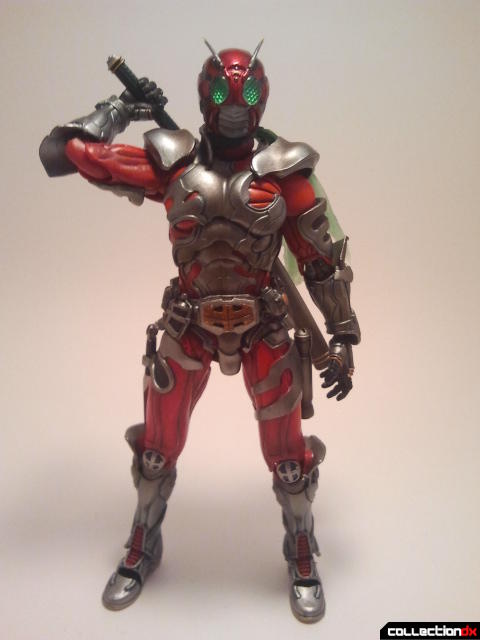 ZX's articulation makes it easy for him to reach for his sword even in its sheath. This is one of my favorite extra features for any toy with a sheathed sword to have, and it wins me over so much. 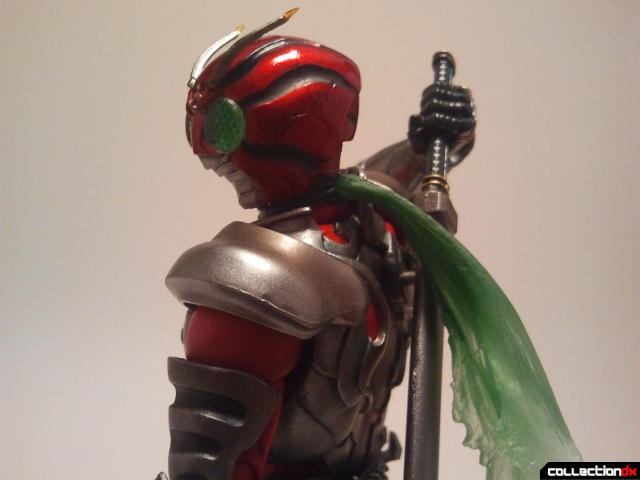 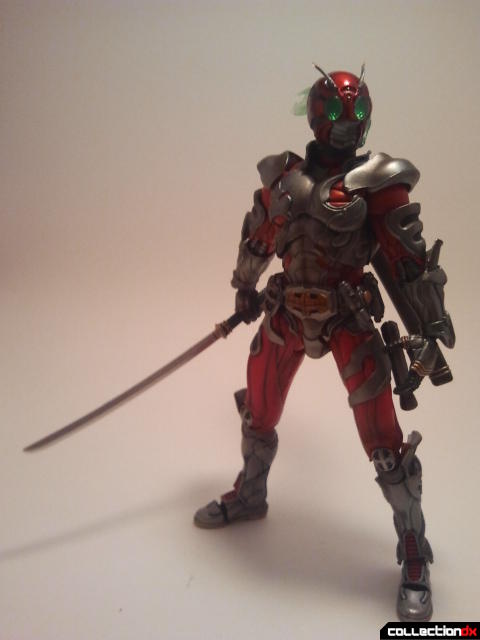 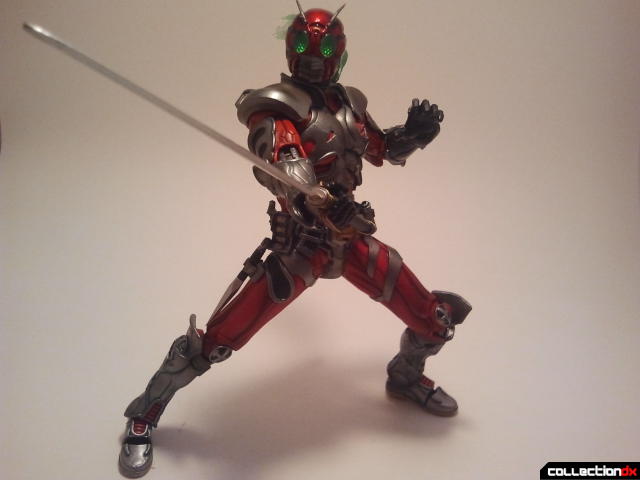 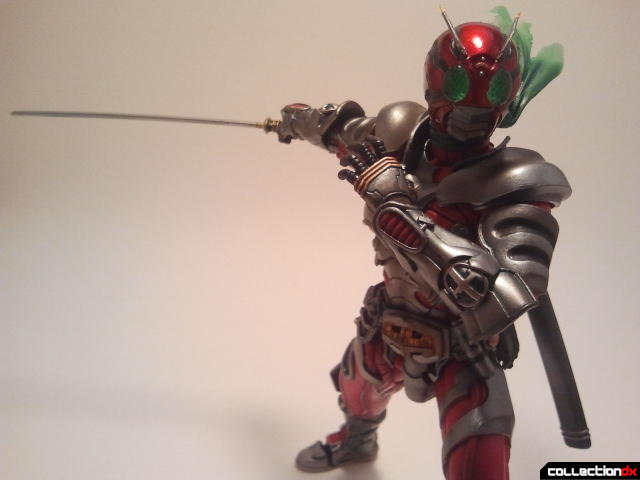 I received SIC Super 1 and ZX at the same time, and originally I was more excited by Super 1 than ZX. However after having a chance to mess with both of them, ZX has surprised me as being the superior figure between the two. His striking asymmetrical design and fantastic ninja accessories really bring him out as one of the best Showa Rider SICs that they've done so far. An absolutely necessary addition to any Kamen Rider or ninja collection.