No figure collection is complete without the girl in blue with the voice that doesn’t quit - Hatsune Miku. Lucky for collectors, she comes in a variety of outfits/poses/styles.

Since I’m an obsessive Nendoroid collector, that’s good news for me. This is the Nendoroid version of Append Miku. For those that don’t know, Append is the updated Vocaloid software. This is how Miku looks on the cover of the software: 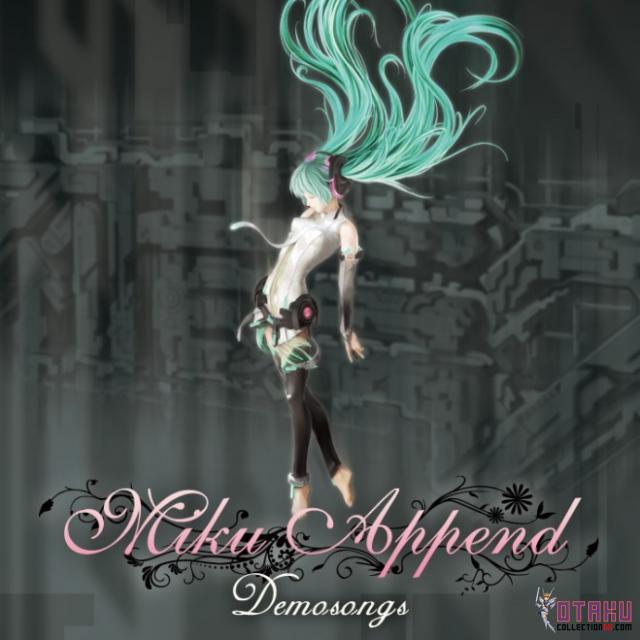 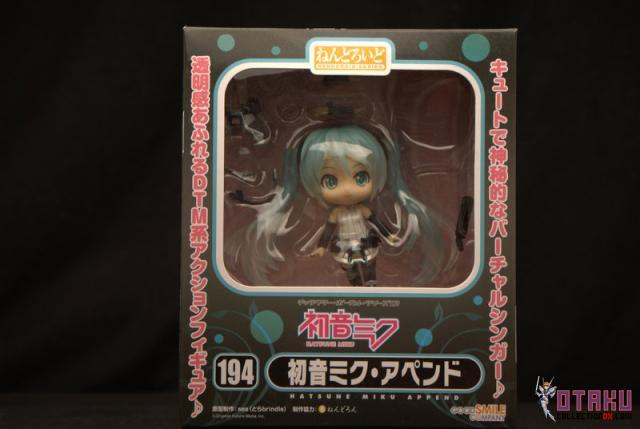 I like that it’s black; some of the Nendoroid boxes have weird, washed-out colors. This one is fairly dynamic.

Here she is in her case: 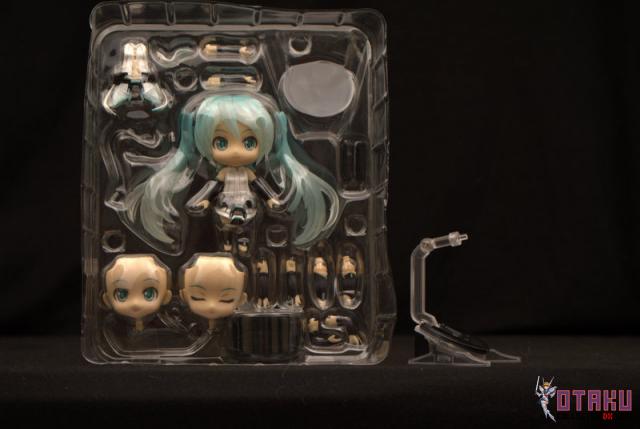 You can see she has a lot of accessories - mostly limbs. She comes with three heads, two bodies, two sets of legs and ten arms. I have the stand out so you can see it better. The stand is kind of a complicated thing with many, many pieces. What’s out in this shot is five pieces already assembled: two feet, two pieces of base (the big part with the LED light and the black disc on top) and the stem. But that’s not all of the parts, oh no. We’ll get to that in a bit, though. 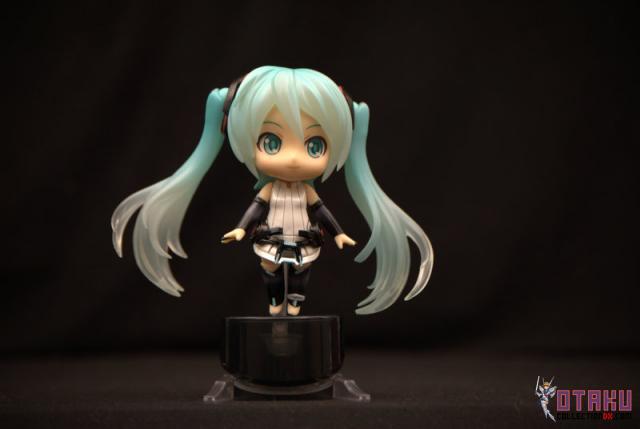 Here she is out of her box! We’ll start from the ground and go up. You can see the base has grown; the giant black cap sits on top of the round discs so her feet have something to touch. Well, not really; her feet hover just slightly above the base, but it’s really close. She’s meant to look like she’s standing. Her skirt has two black belt pieces attached to her; the front piece snaps on at her hips. There are two little balls underneath the big circles at her hip. She’s wearing her first head, body, legs and arms. This is exactly how she comes out of the box, no tweaking, no added accessories.

You can see that she sit’s a little crooked on her base. I had a devil of a time making her stand up straight, and even when I did she slid to the side a little while being photographed. I’m guessing it’s the weight of her hair, which has a spectacular range of motion. If the hair is even slightly off-balance, the whole thing rotates on the stem to the side.

Let’s swap out some body parts. 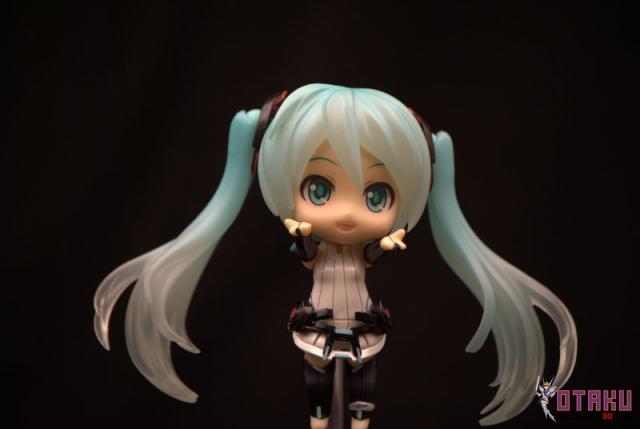 Here she is with her second face and another set of arms. She’s singing to her adoring fans in this pose, clearly.

Say, where are those adoring fans, anyway? 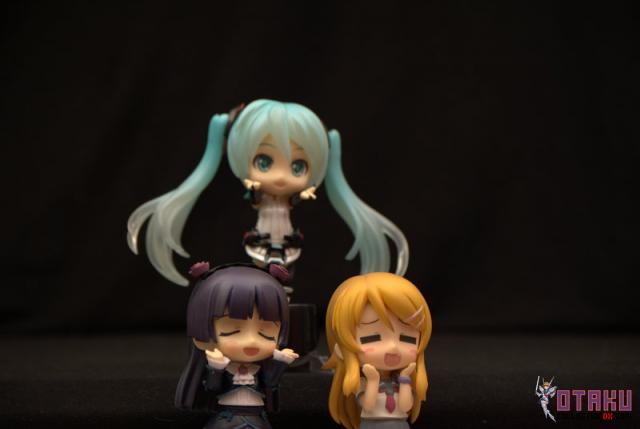 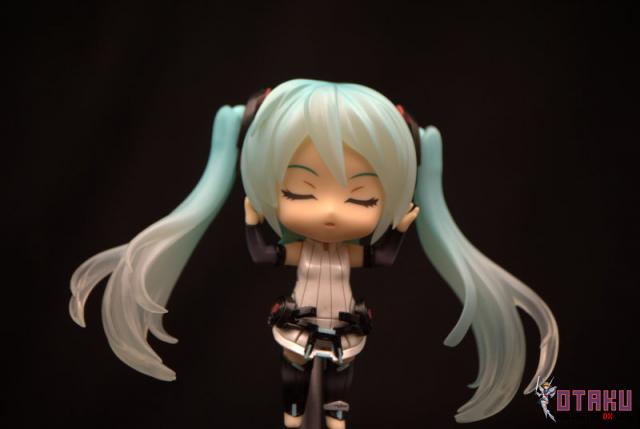 I like to think of face number three as “Serene Face.” She’s also got a new set of hands here, and appears to be really into the music. 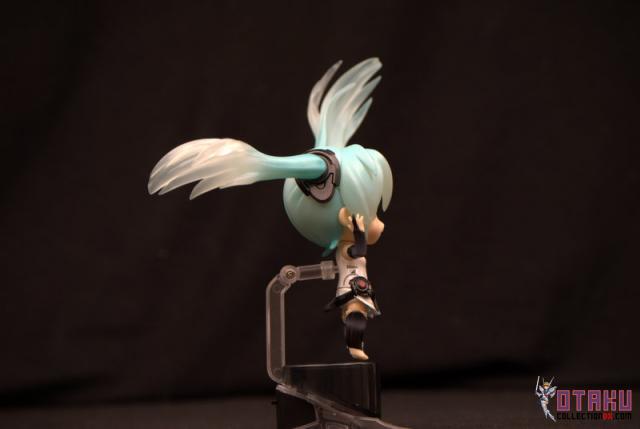 If you look at her from the side, you can see how she fits onto her stand. The port plugs into her back like a normal Nendoroid stand, but the piece that fits into the circular port isn’t the snuggest fit, which is what allows Miku to rotate. You can also see the way her feet hover over the base a little from this angle, as well as the way her belt sits on her. The back half of the belt plugs into a little hole in a very unfortunate place. They really didn’t plan that part very well - or how many butt jokes it would spawn. I moved around her hair to show the range of motion. 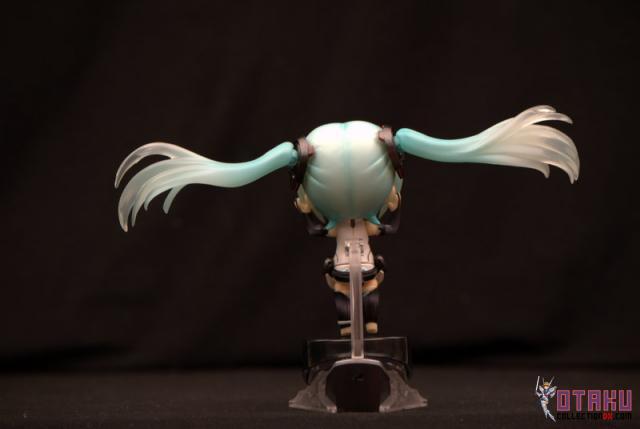 This is probably the best angle to get a good look at the ball joints in her hair. You can also see the light switch on the base for the little LED light. Other than that, there’s not much to say about this angle. 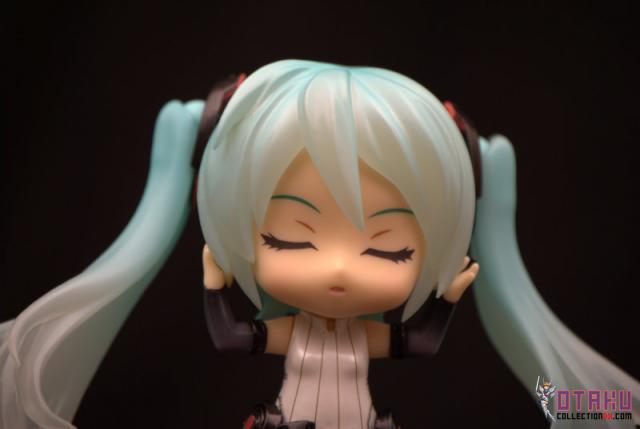 This is, hands down, my favorite face - possibly because it’s the face that goes along with the money shot. Let’s look at that money shot. 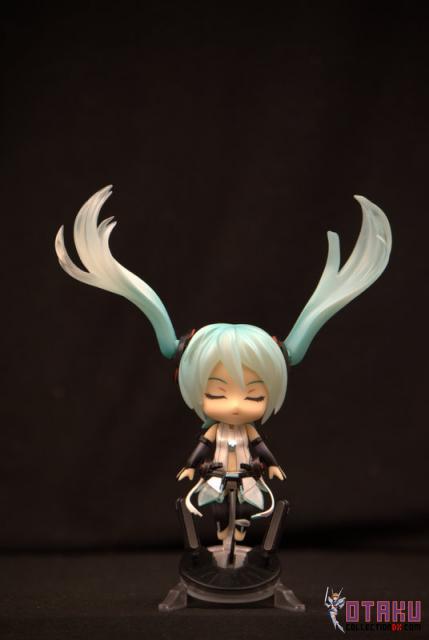 Here it is. The extra piece of base is gone, showing her in full Matrix hover form. Her hair is blown upwards, as is her tie (which shows off her belly button). She has the extra skirt going, her toes are pointed down, her hands floating at her side. The base has speakers on it now, and though it’s hard to see she has a wire running from the base to her back. 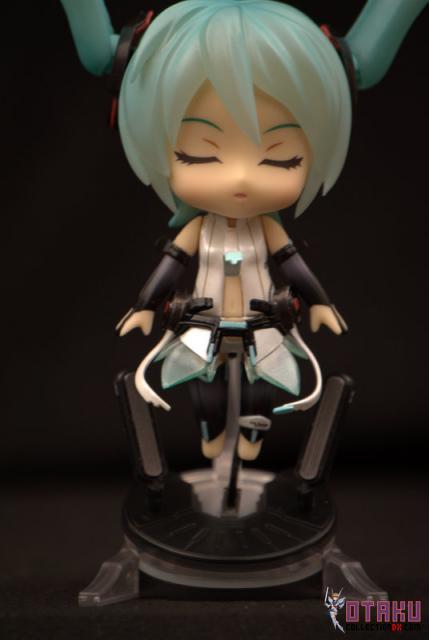 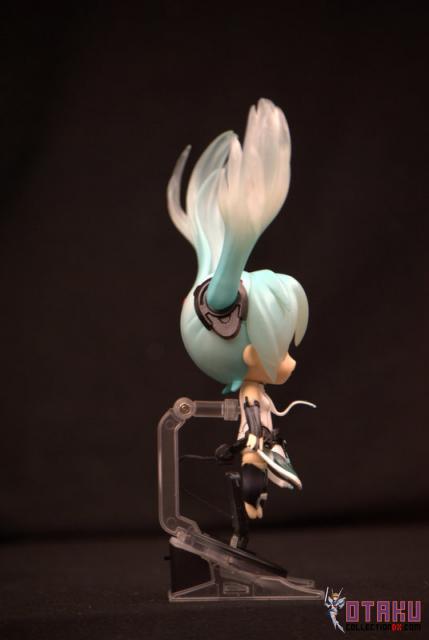 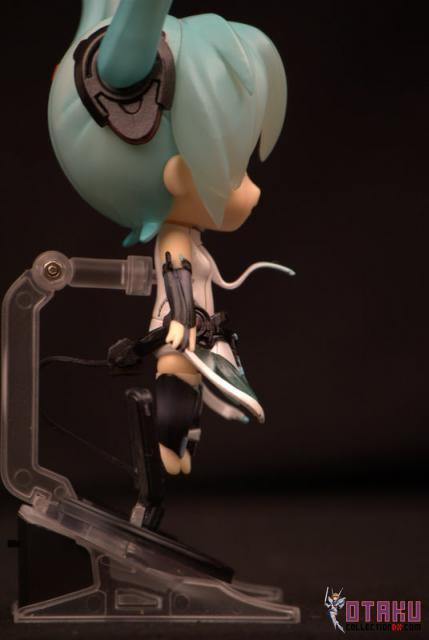 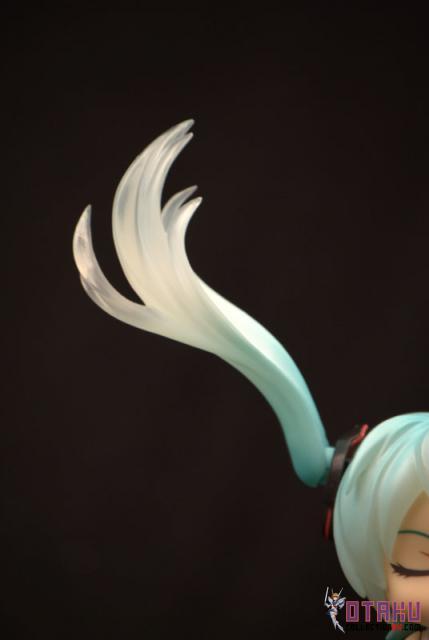 The fade on the hair is really something. For that matter, so is the sculpt. Her hair is easily the most impressive part of this figure, though considering the subject, it should be.

So, the big gimmick with this thing is the LED light, yes? Let’s have a look at what happens when you turn that bad boy on. And for good measure, we will do it in the dark. 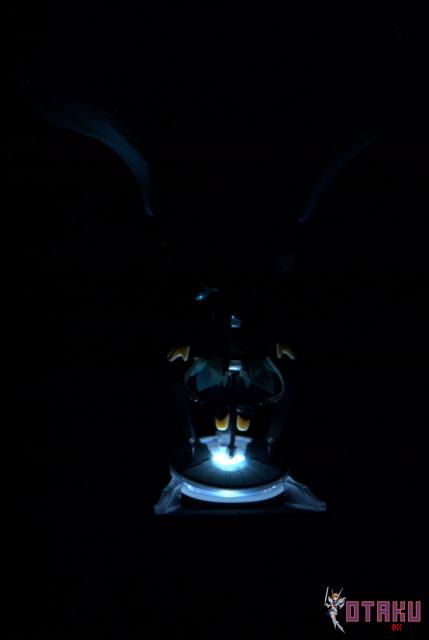 Not so impressive. Kinda sad, really. Here’s what it should look like: 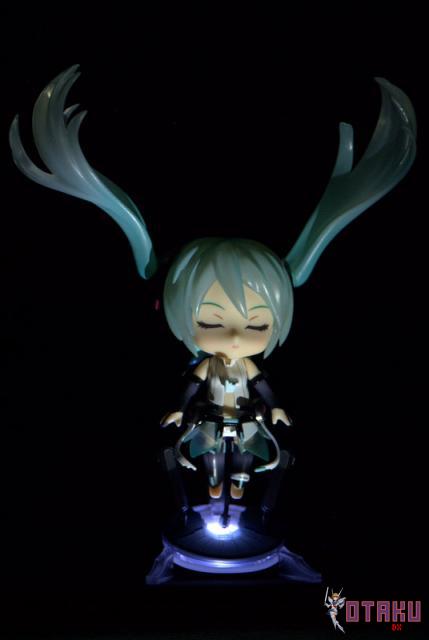 That, incidentally, was done with a highly sophisticated piece of photography equipment. Nah, just kidding, it was the light on an iPhone.

All in all? Not a bad figure. The sculpt is nice, the paint is very well done. The hair is lovely, if not problematic. Pieces do pop off quite easily, most especially the floating tie on the append body. I lost count of how many times it just jumped right off the figure. It was pretty frustrating, to the point that I threatened to superglue the thing on. It’s a small complaint, though. The biggest problem is the wee light, but it’s still not enough to make me not adore the figure.

Thanks to the always amazing HobbyLink Japan for the figure.