Earlier we took a look at the G-1 from Fewture Models. Now it's time for the G-5, otherwise known as the Godphoenix.

This ship is an icon from my childhood. It's right up there next to the X-Wing Fighter or the Argo (aka the Yamato).

So I would expect any toy of this ship to try to replicate at least some of the iconic effects in the show.

The Fewture EX Gokin does next to nothing. It's an expensive paperweight. Granted, it's a nice looking, diecast paperweight, but a paperweight nonetheless.

This is the Repaint Version, which features darker metallic paints from the original. The original was sold in a three pack with G3 & G4.

The box is nice, but misleading to the size of the actual toy. The front has foil lettering, the back has a few pictures. The cardboard is nice and thick. 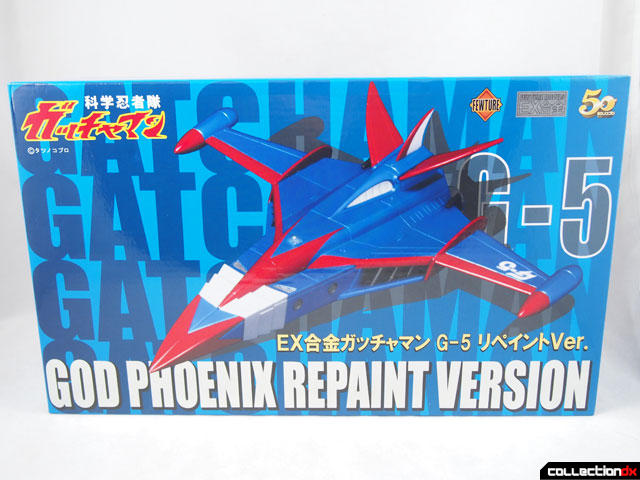 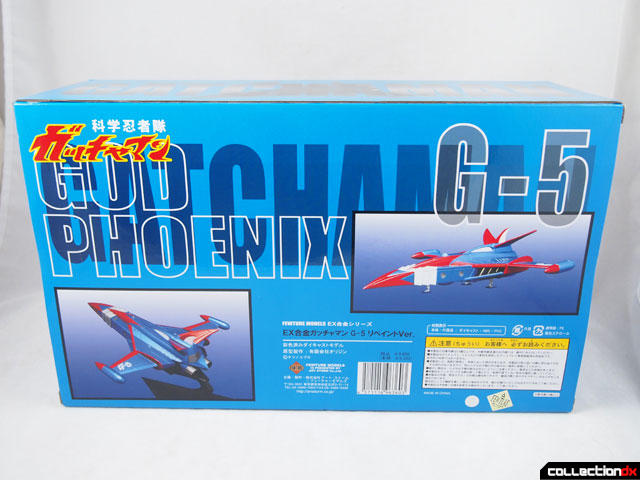 The ship is nice for what it is. You will hear me flip-flop on this, so get used to it. Basically, it's a good looking hunk of diecast that doesn't do much of anything.

The ship looks great, and hits most of the design cues of the original. It's modernized a little, with some panel lines and such that you never see in the show. The nose seems a bit short to me, but it could just be perspective. 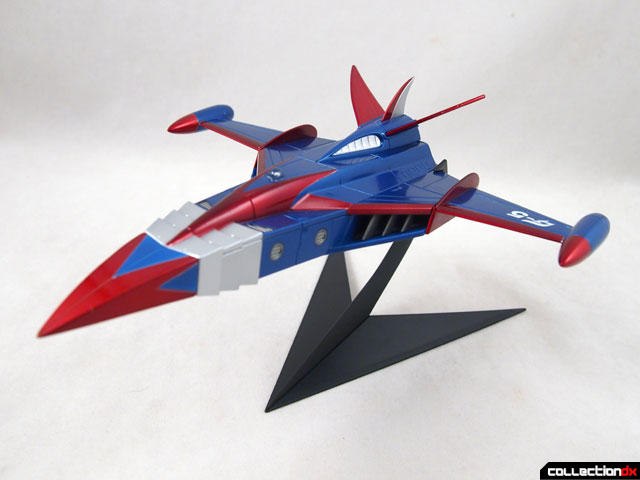 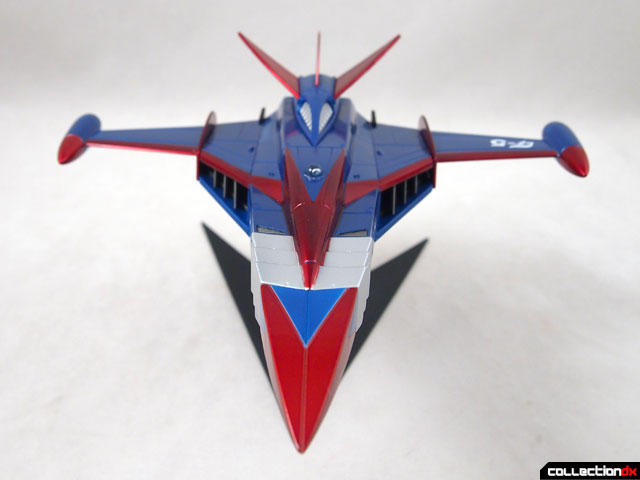 I love this view. It hits me right in the feels. 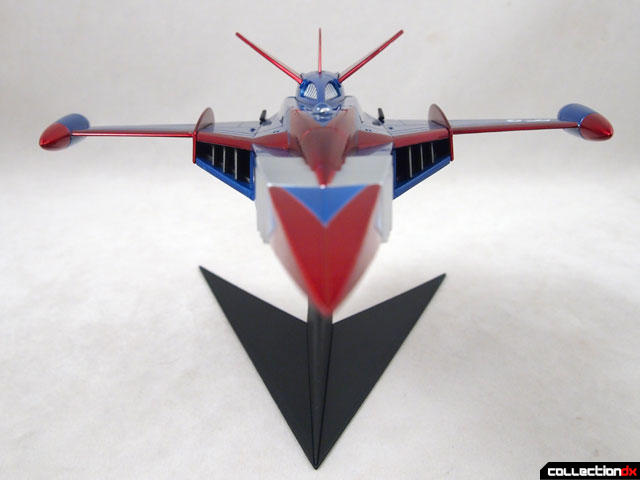 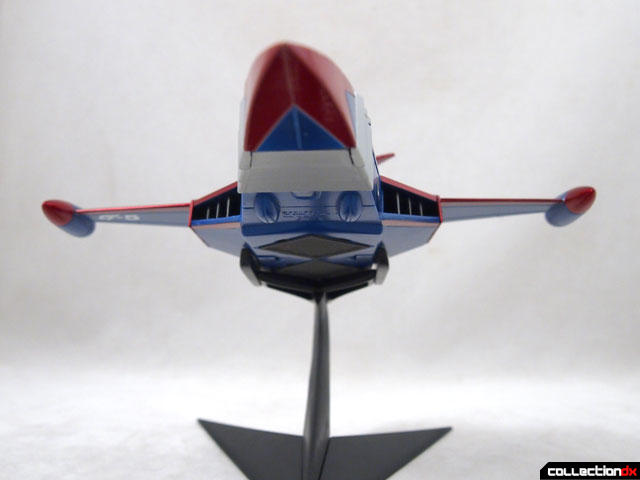 The fins on the back seem a bit large. But still. Looks good. 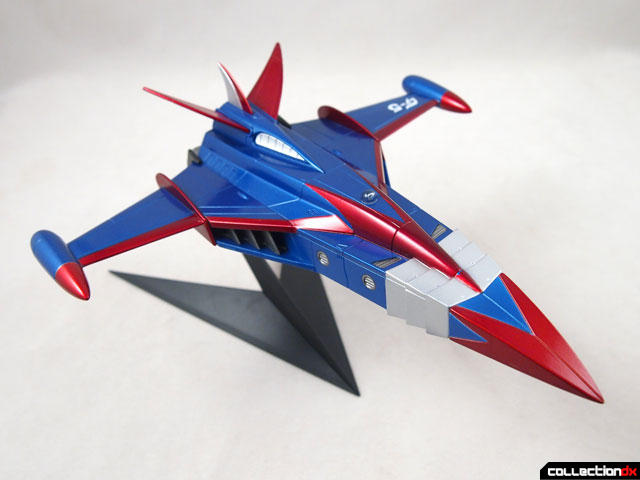 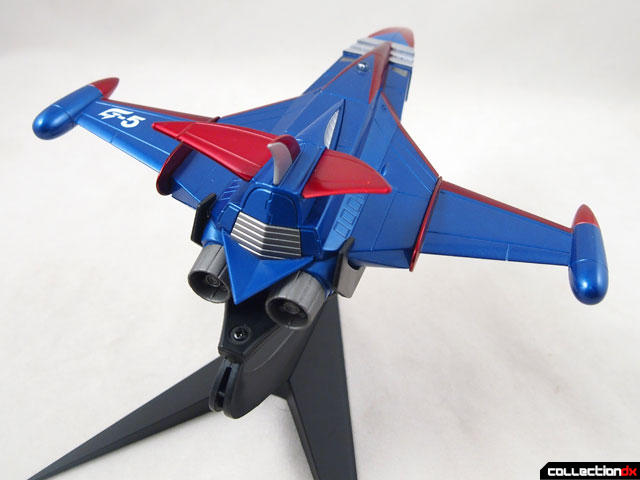 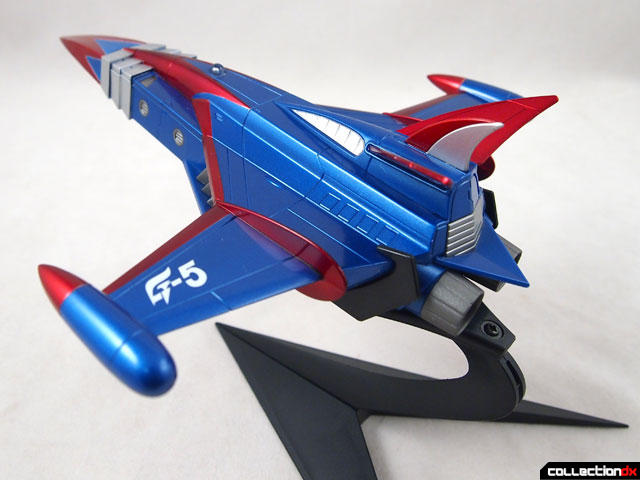 Lets take a look at some of the detail.

The pods on the wings that are supposed to hold the ships look good, but do not open. 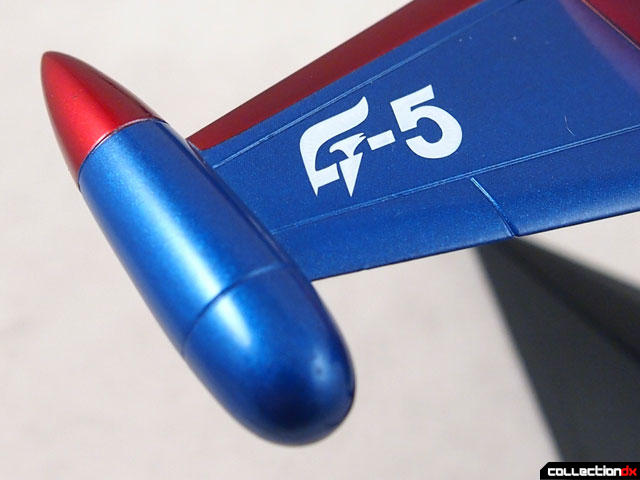 The intake vents do not close. 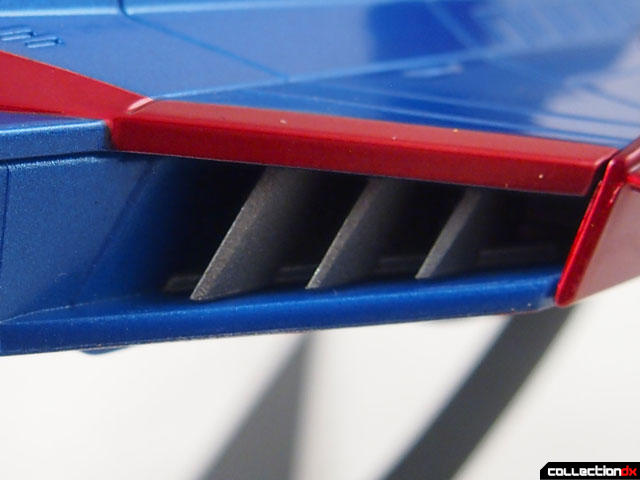 In the show the team rises up out of the Phoenix via a clear dome elevator. It's nicely represented here. 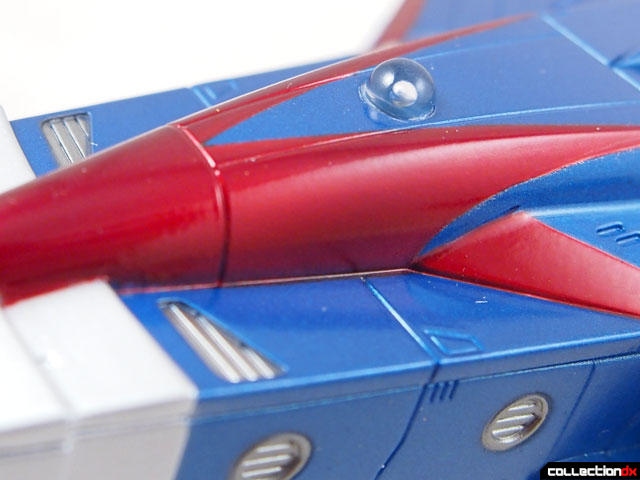 The fins in the back seem too big but probably are closer to the animation model. Remember, the middle fin is the fin of the G-1, and it would never fit in that space if the fin was that big. 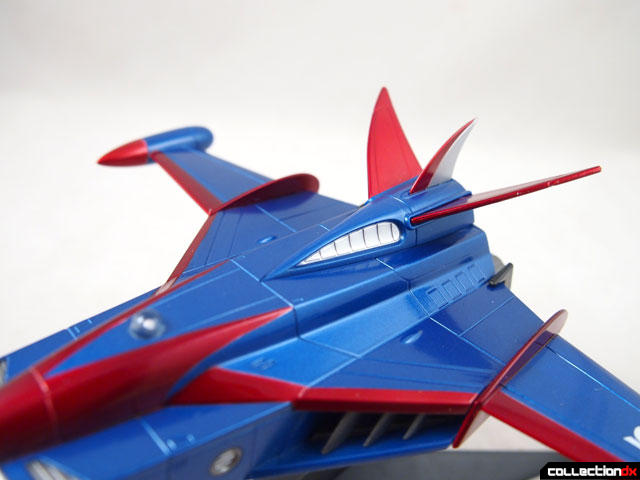 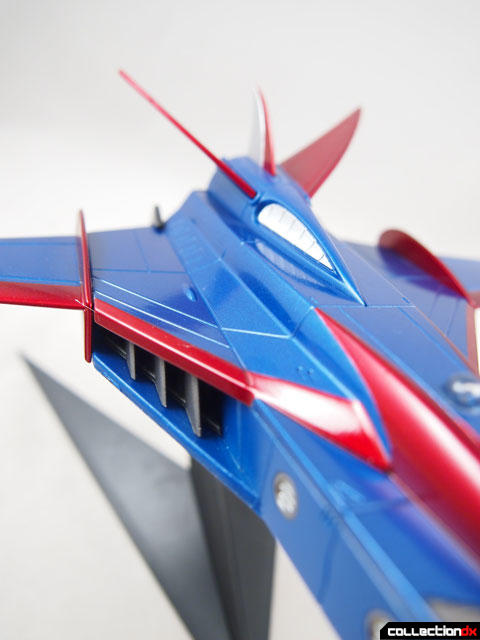 The included stand is too dark in my opinion, so a flightpose stand lets you concentrate on the shape of the GodPhoenix more. 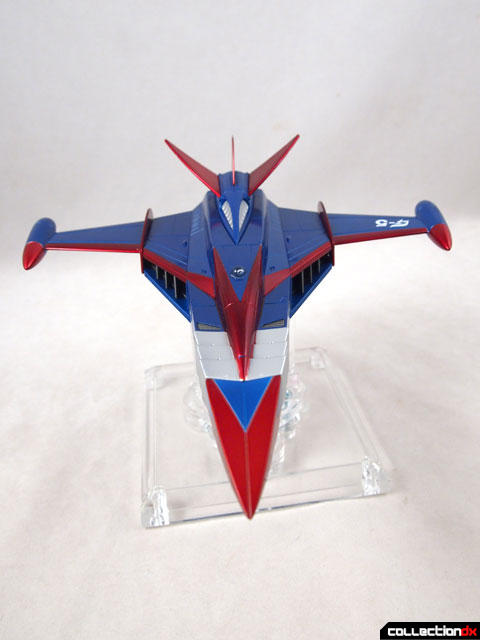 The underside of the ship is pretty sleek. Not a lot to complain about looks-wise. 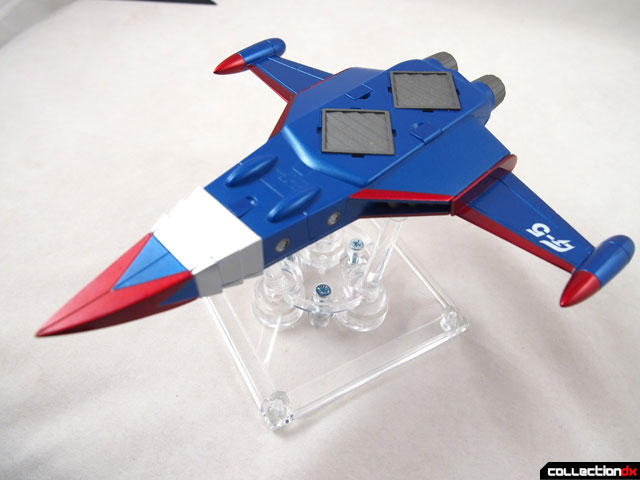 One gimmick it does include is swappable bottom vents for the VTOL engines at the bottom. Use the closed vents for flight, and the open vents for landing. There's nice detail with the engines themselves. 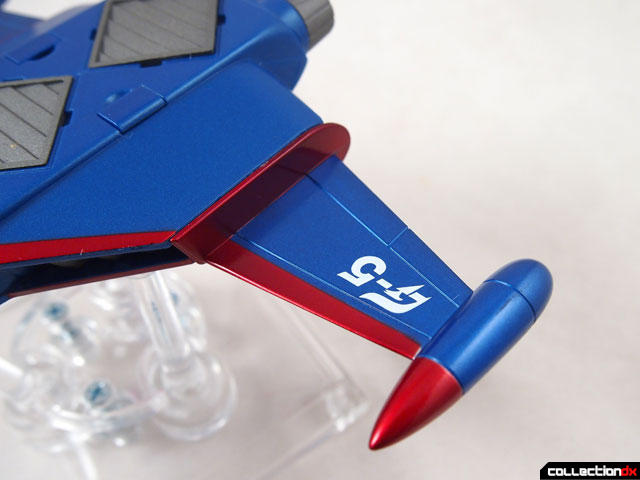 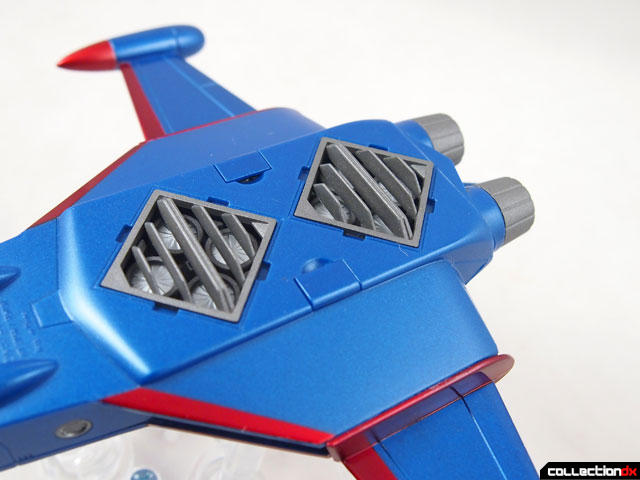 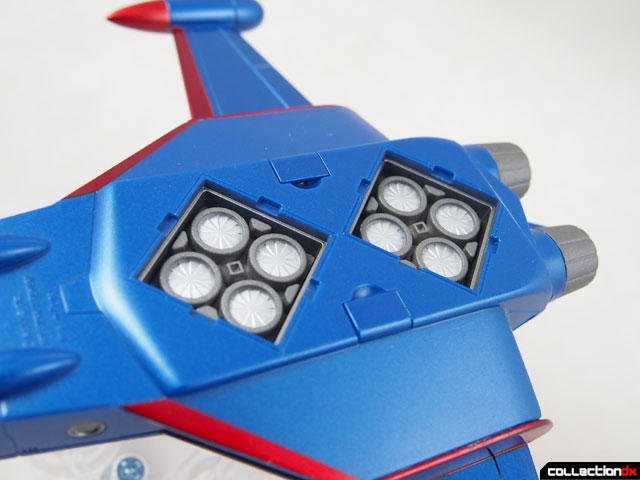 Landing gear is included, but you have to swap out panels and attach them. Prepare to have a tiny screwdriver handy to pry out the panels. 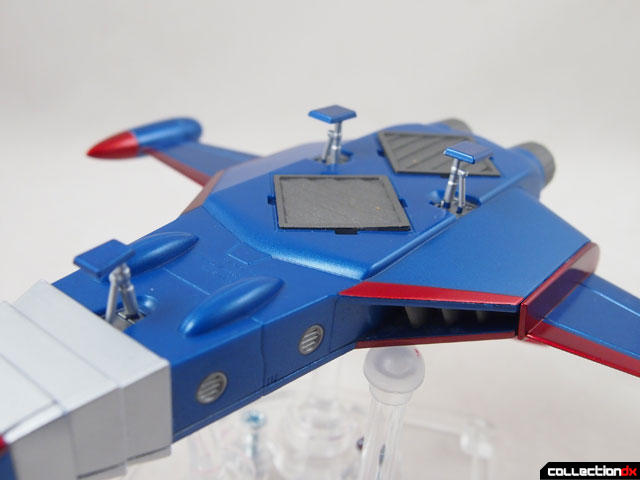 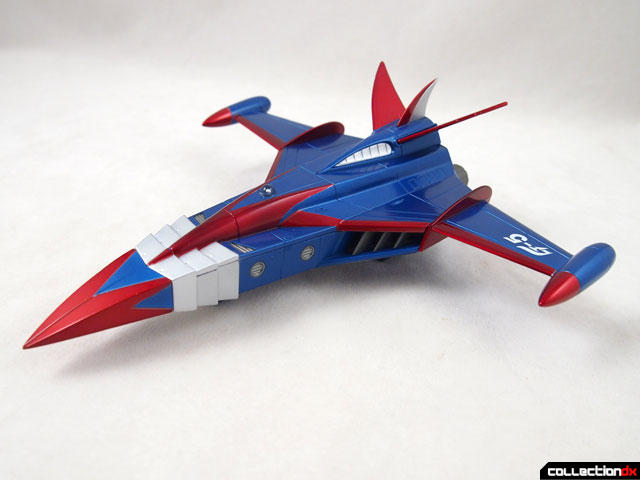 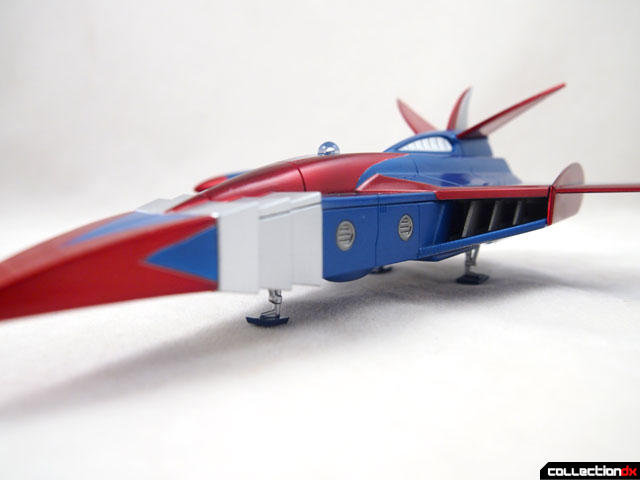 Wait, didn't the Godphoenix have wheels? 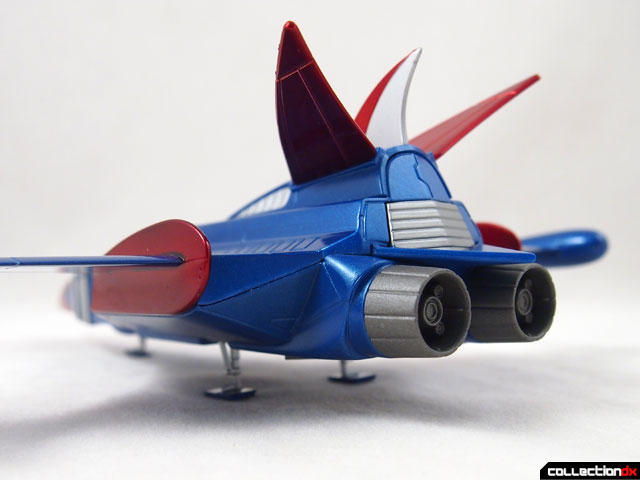 Another included gimmick is the swappable rear panel to reveal the underwater engines. 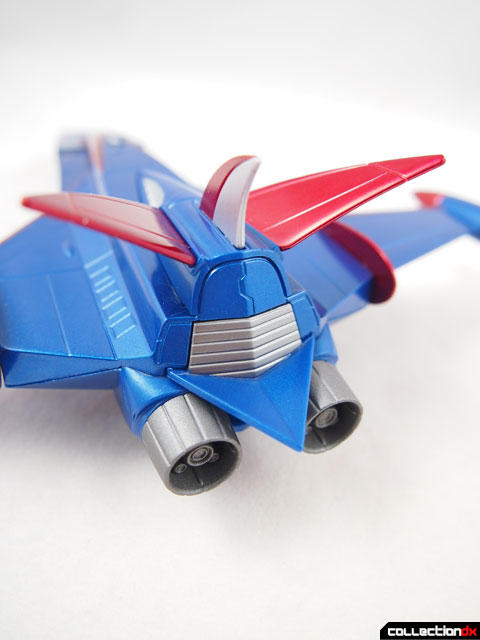 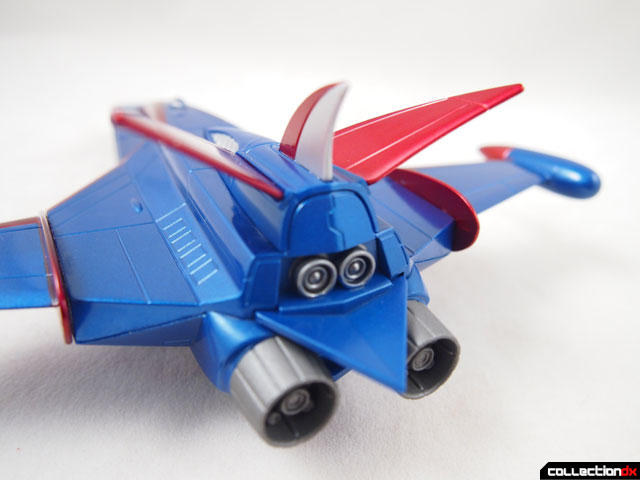 Here's something I don't understand. Of all the gimmicks to do – you choose to do the underwater engines? And even then, they don't make the vents close (the other part of going underwater). It's just half thought out. It's not even like it's a signature gimmick of the ship – that would be the the docking of all the ships. If you are going to do ONE thing – do that. It's like making a $300 Voltron and not making the lions separate, but including some miniscule effect part instead.

So there's that. Then there is the issue of size. 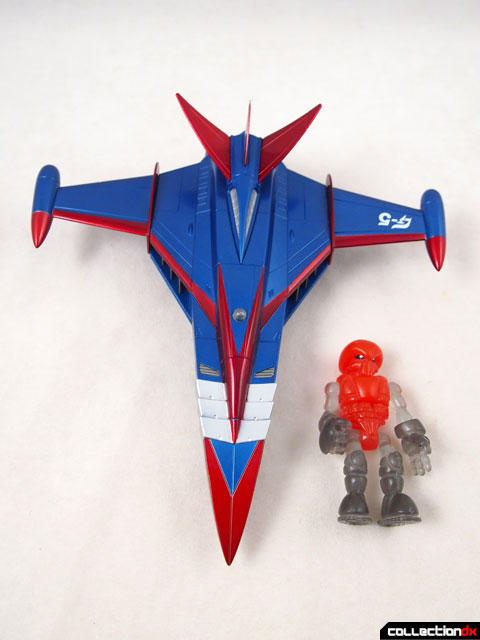 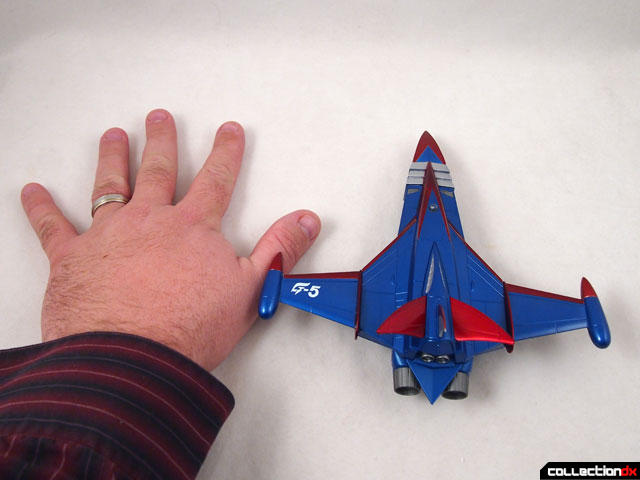 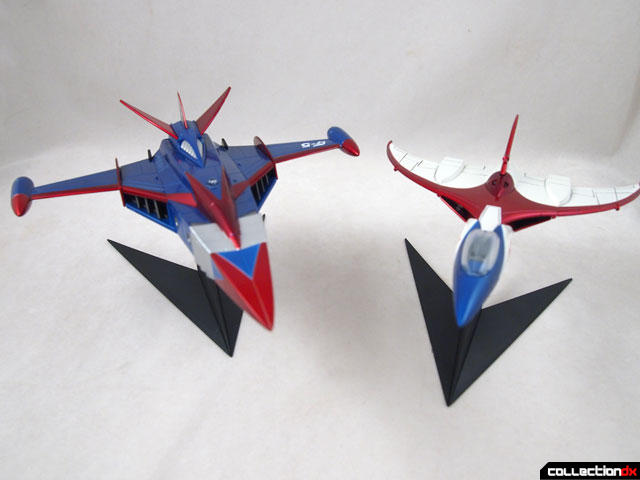 But, at the end of the day, it is the Godphoenix. It looks good, has a decent weight and there aren't a lot of toys made of it. I'll keep it, but I'll keep wishing it was something more. 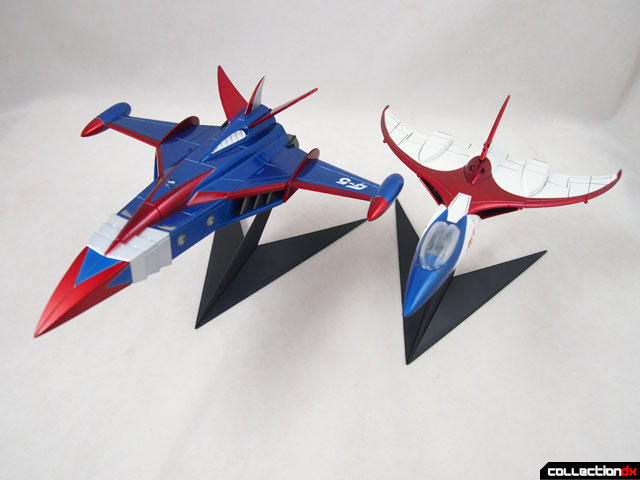 Several years ago, I reviewed the UniFive Godphoenix and was also torn. One one hand I was in love with the fact that it was a modern diecast of one of my favorite ships. But the other side was that it was poorly constructed. It did however at least attempt to include all of the signature gimmicks.

Somewhere, someday, there will be a version of this toy that has the quality and diecast of the Fewture Version with the ambitiousness of the UniFive version.

I was also left wanting more with this. It is a very nice paperweight. I snapped one of the pegs for the panels where the landing gear goes on. Mine apparently had bad paint apps because there are several places where a factory worker took a brush and painted the panels. So there are brush marks all over mine... unacceptable for a 100 piece.

That being said, great review

Fewture Diecasts typically do have touch-ups here and there, but this one does not. Perhaps I got lucky. And I was aware that it lacked gimmicks when I put in the order for it, but that was because I still love the ship and its design. The information was more for those considering the purchase.

Really great pics. I think your last statement about the unifive is right on. It had the ambition just wish the hatches would stay shut but to me that is the ultimate godphoenix so far. This is the one I keep on my shelf by my desk. I can grab it, fly it around and not be too worried about it falling apart and it looks really nice. -Ted