The designs in Transformers Prime bridge the styles between Animated and Generations, two of the best modern Transformers toy lines. In some cases, the designs are great enough to make me break my moratorium on purchasing Transformers.

I missed out on the First Edition versions of the Prime figures, but I managed to pick up the regular release of Arcee. It's a fantastic figure.

Arcee, like all the TF: Prime Deluxe toys, comes packaged in alt mode, so that's where we will start.

In this iteration, Arcee takes on the form of a Japanese sport bike. I'm not sure if it's based on an actual bike or not, but it looks great. It's a solid alt mode. 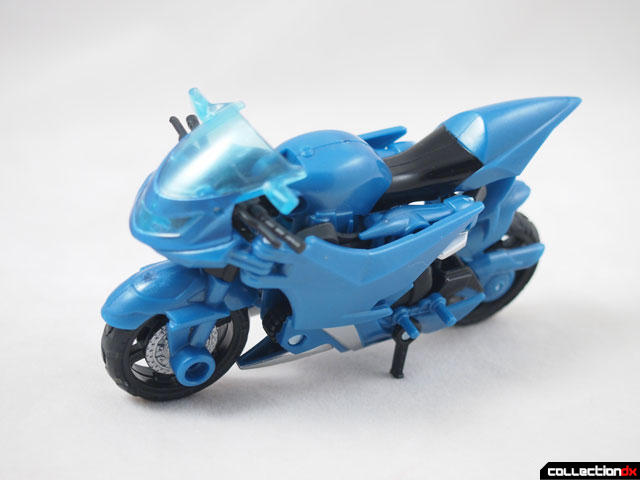 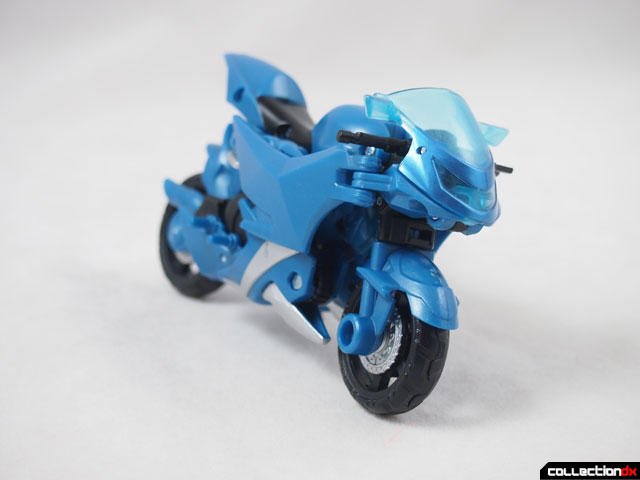 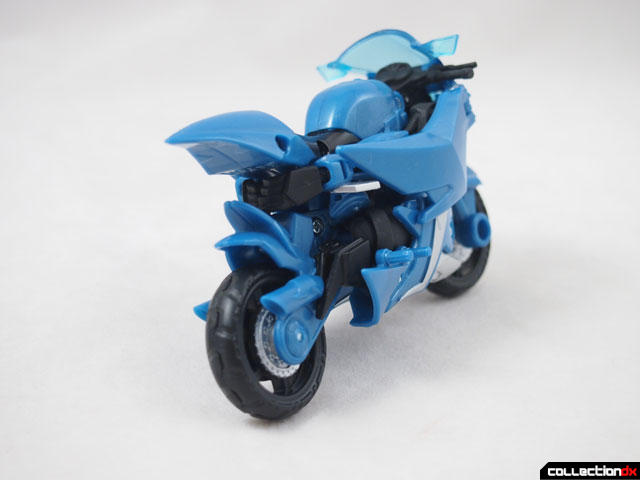 The wheels roll but the steering isn't functional. There's not a lot of painted detail in this mode so it looks sort of plain. 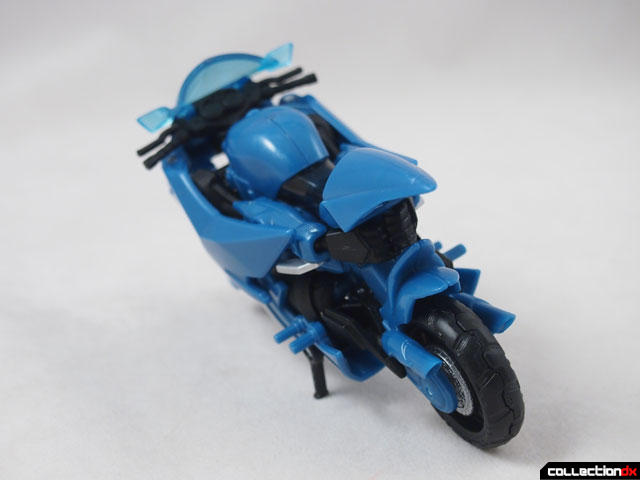 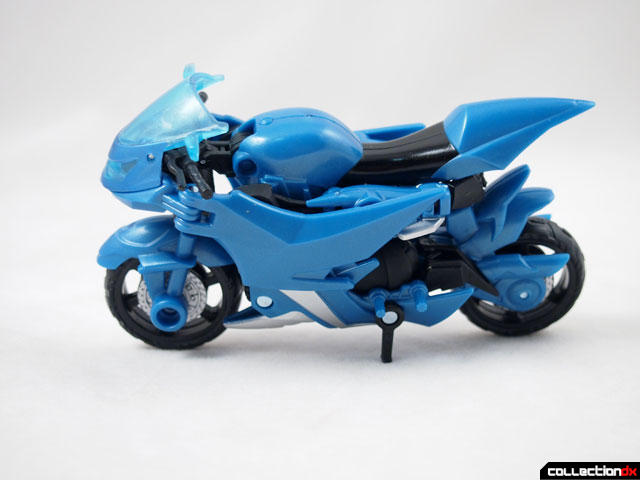 On each side of the front wheel are 5mm ports in which you can attach the two weapons. 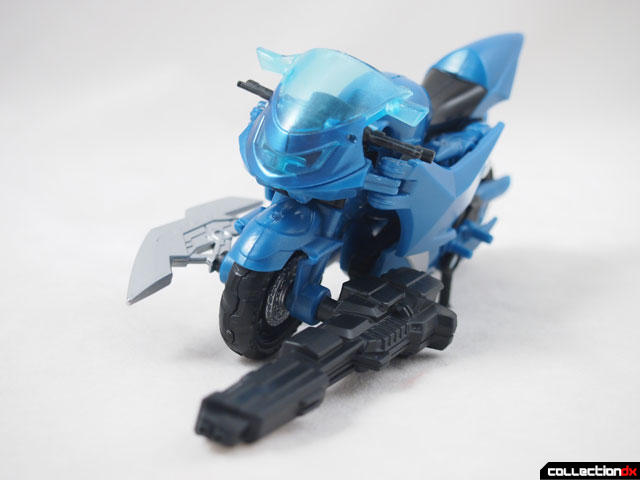 Transformation is so simple any child could do it, which is a nice change of pace. 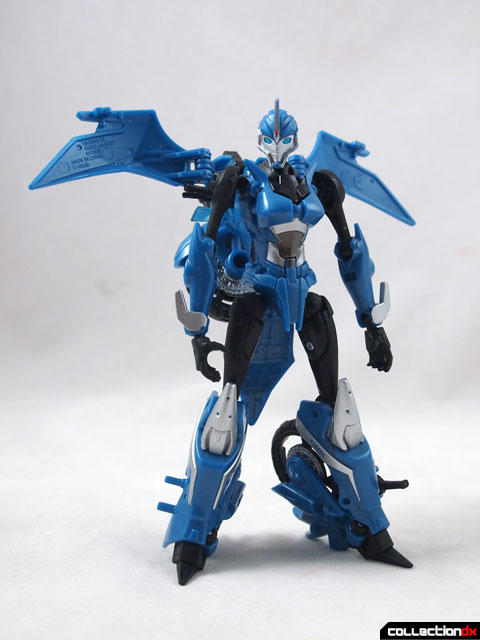 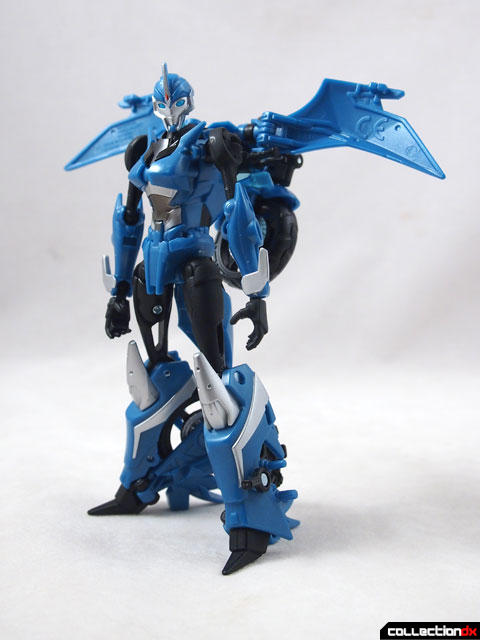 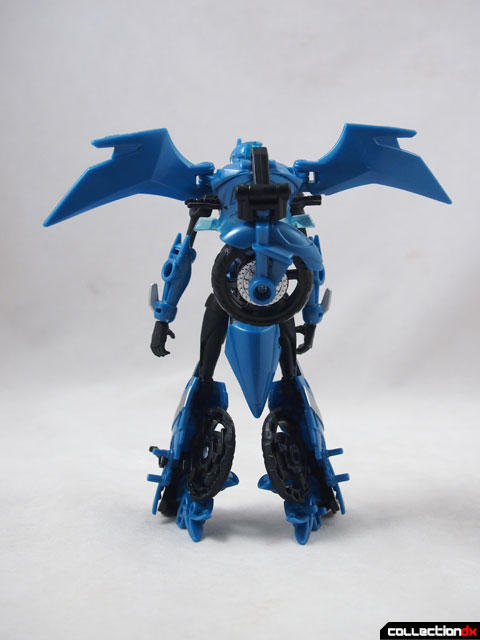 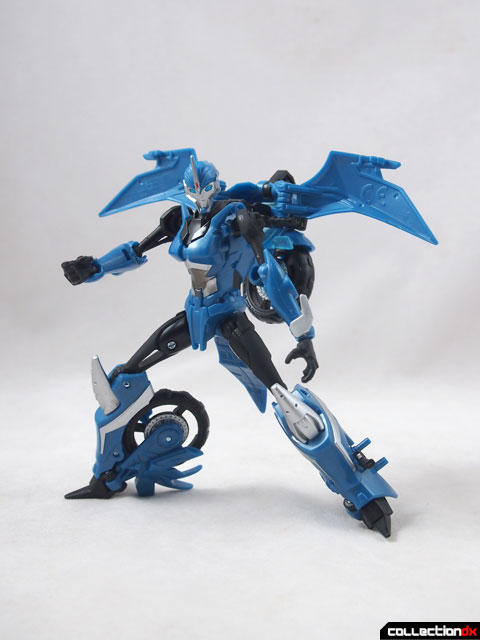 The head has the mandatory light-piping, with a ball-jointed neck and a really expressive face. 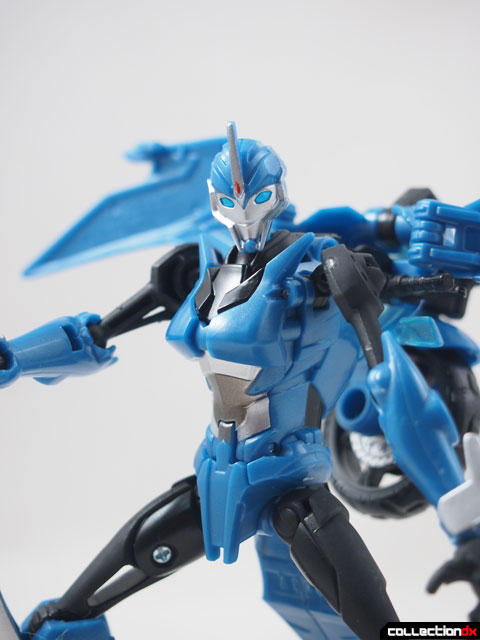 Is it sexist that a female robot has high heels? 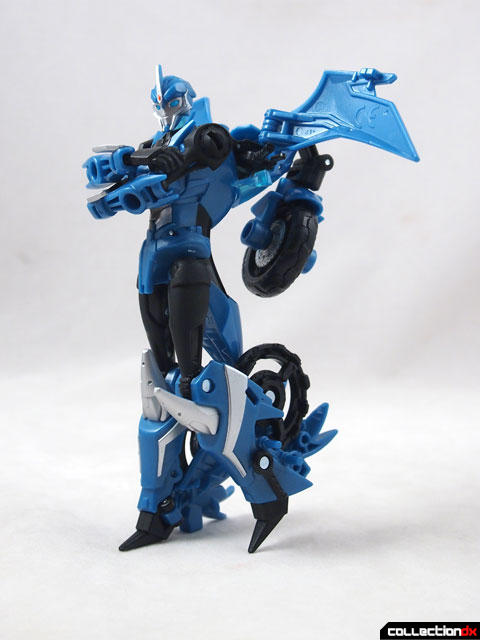 Each joint is ball-jointed goodness. The legs have a real great swivel up near the hips. 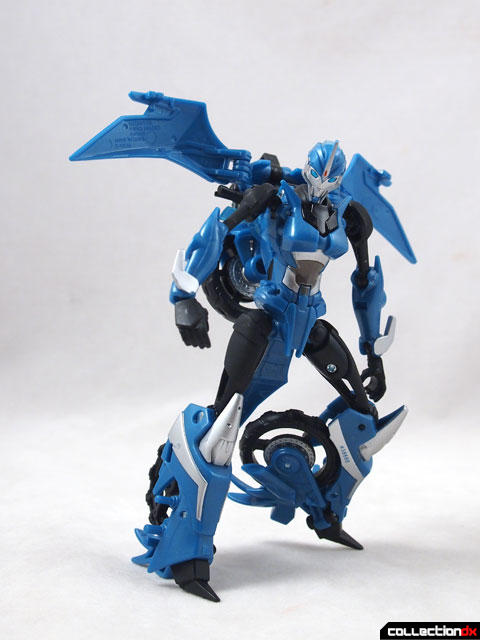 The arms also have 5mm ports that the weapons can plug into. There's a bladed weapon and an arm cannon. 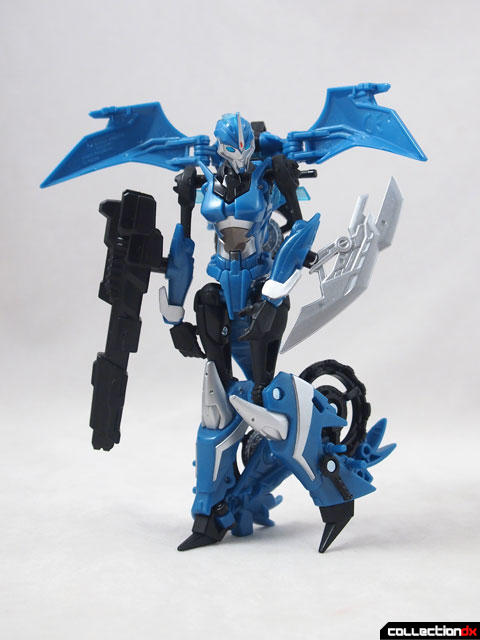 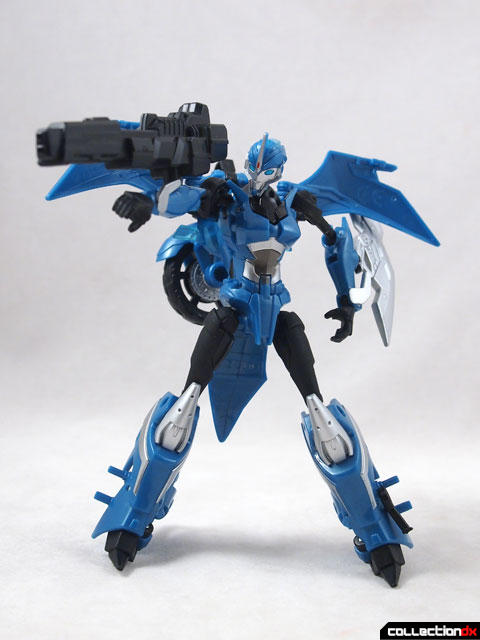 Both weapons can be combined and held in the hands as well. 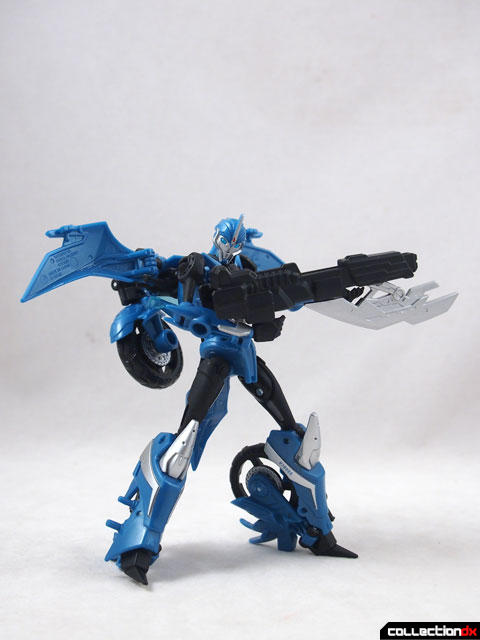 I cant stress enough how great this figure looks. It's got great proportions and the gun is perfect. 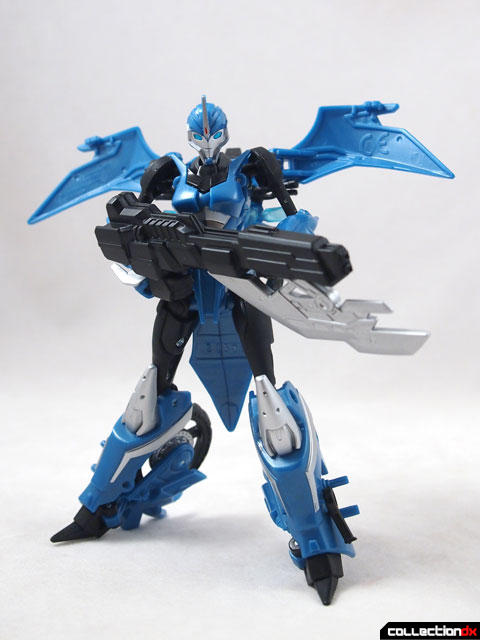 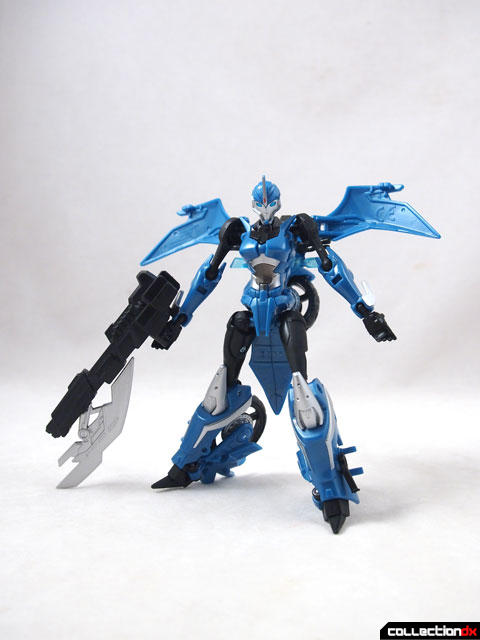 As a bonus, you can mount the gun on her back. 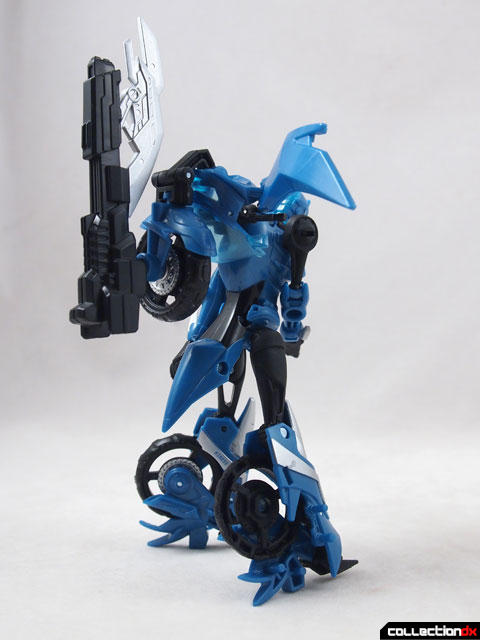 Overall, she's a great toy and not too hard to find.

Josh, the First Edition ones are popping up again now and are even priced cheaper than the RID ones, at least by me. If you like this one you will definitely like the FE one. More detailed, better plastic, bigger...just better all around. Give it a try

I have started collecting Transformers from the Prime series, I've been lucky to get Bulkhead and Optimus Prime in their first edition versions (which are a lot better than the RID ones). I'm planning to get Bumblebee and Arcee too.

After investigating quite a bit about both versions of Arcee (and thanks to your review also), I'm more inclined to this version of her, because it scales a lot better with the Autobot line up than the first edition (which is taller than Bumblebee)

I prefer the RiD Arcee to the First Edition, too. FE Arcee may be bigger, have a more involved transformation and all that, but RiD Arcee's face is nicer, with the larger eyes (plus, like you said, she's more in-scale).