Fuuuusion Ha!! This review brought to you by the Great SeiyaMann (SentaiSeiya and Jmann). 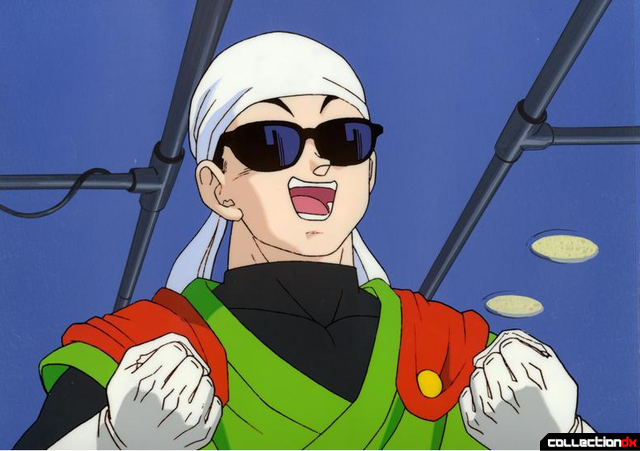 What is there to say about Yumeria Moegi, aka Akiba Yellow? During business hours she is your average 23 year-old office worker. During her leisure time, however, another side of Yumeria comes out. 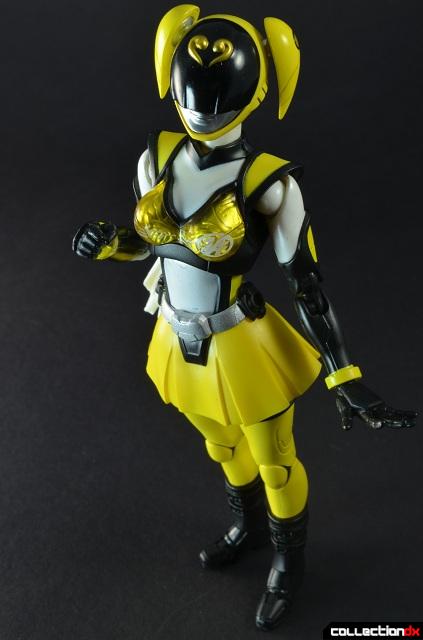 She is an avid cosplayer (in fact, Yumeria is her cosplayer name, not her given name), Doujin artist, regular Comiket attendant, and all-around otaku. She is also a Fujoshi (腐女子), which translates to rotten girl. Why rotten you ask? That is because a Fujoshi likes to fantasize about male characters from anime, TV, etc. falling in love with each other. It is these fantasies that fuel Yumeria’s inspiration for the Doujin she creates. Unfortunately, these fantasies also end up spilling into the delusion-driven fights of the Akibarangers.

Both of the masked men bravely fought to see who would win the hand of the lord. 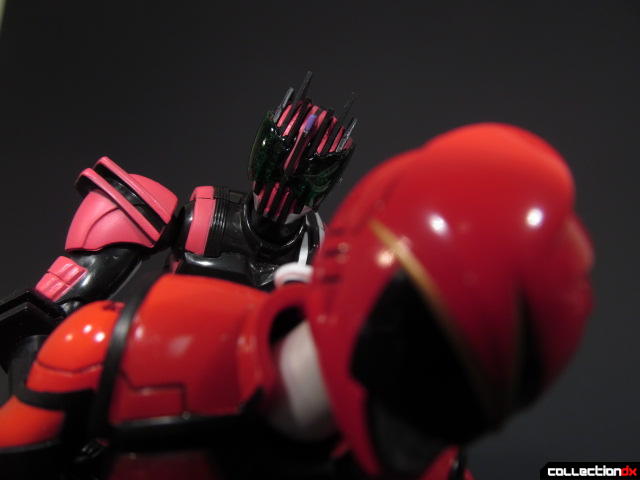 The battle ensued for what seemed to be weeks and weeks. Oh who would win!? 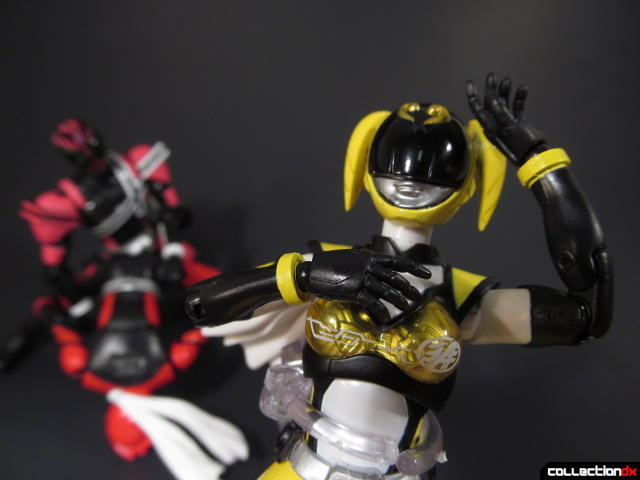 In the end the Red Warrior, the true love of the lord, was the victor. 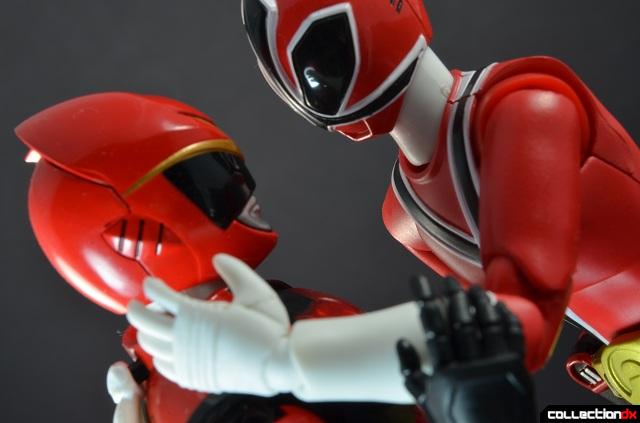 Okay. That is enough guy on guy! For whatever readers are still reading, let's get back to the toy! 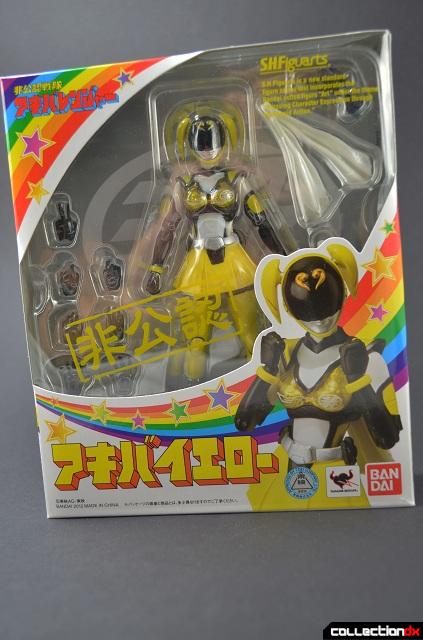 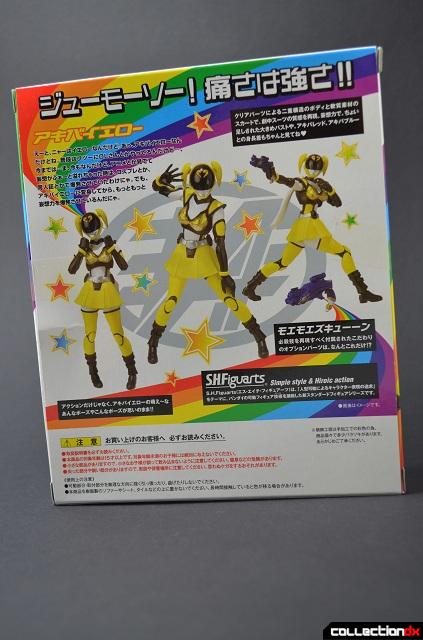 Bandai is three for three with the Akibarangers; they have made another great figure to round out the trio of the Unofficial Sentai. 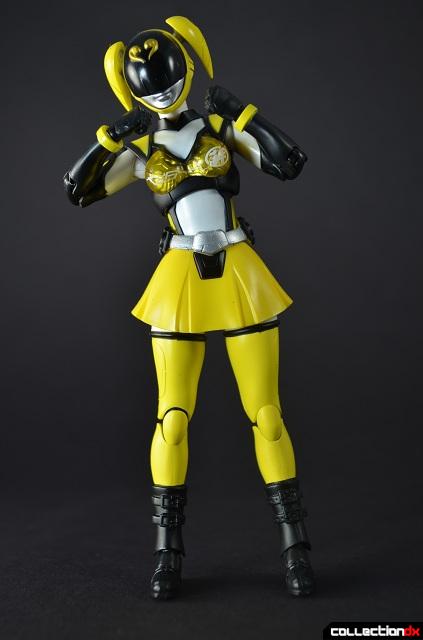 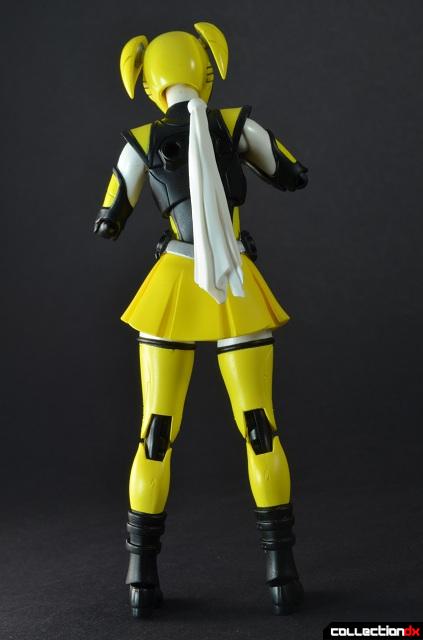 I especially like the yellow paint job in this figure, which is very lively and made the figure pop more than other other two members. The bright color is as cheerful as the character it represents.

Again! I love those clear parts on the figures. It is one of my favorite things about the design and it is faithfully recreated by Bandai. 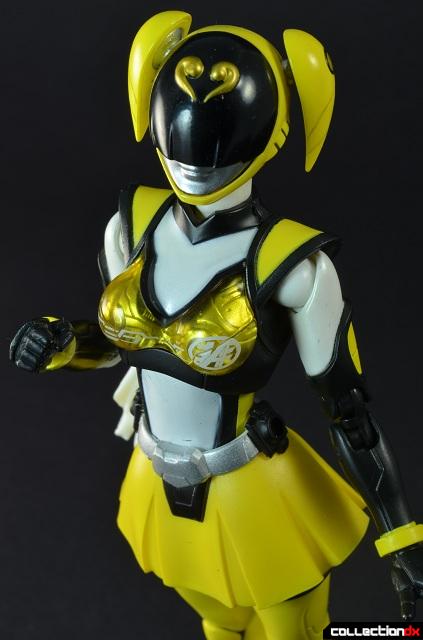 JM: Absolutely! As with the others, Akiba Yellow is rendered exactly as she appears on screen! The colors are perfect, and all of her tiny details are spoken for here. 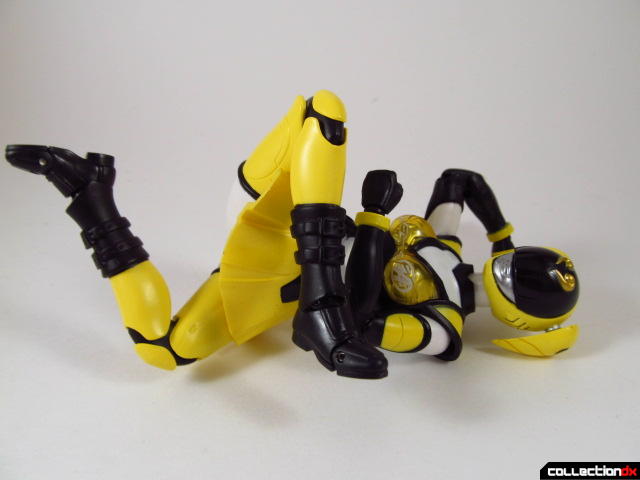 S.S. Akiba Yellow’s articulation is the same as Akiba Blue’s; it has a ton of articulation, but lacks a bicep swivel. 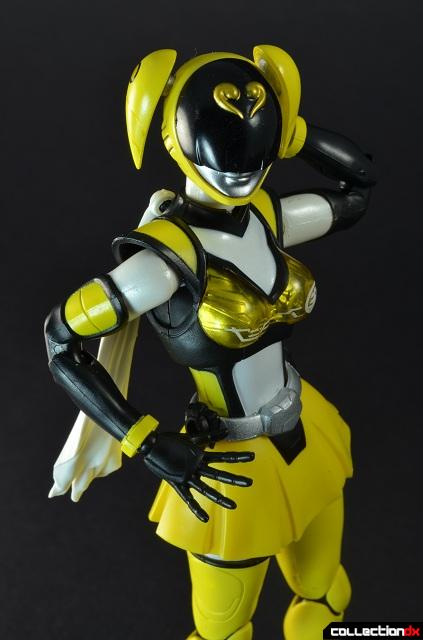 With Akiba Yellow, however, I did not miss the extra articulation in the upper arms.

JM: Yeah, the bicep swivel wasn't as necessary here as I felt it was with Blue. 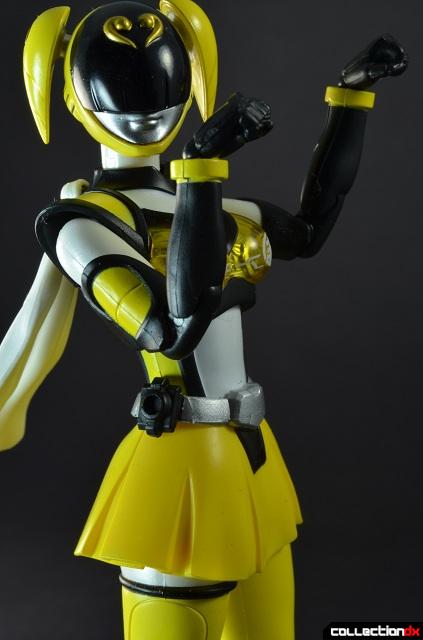 I had absolutely no trouble getting her into any pose from the show. Her thigh swivels are almost nonexistent, and I did have some trouble adjusting her legs in some of the poses but it's not that big of a deal. 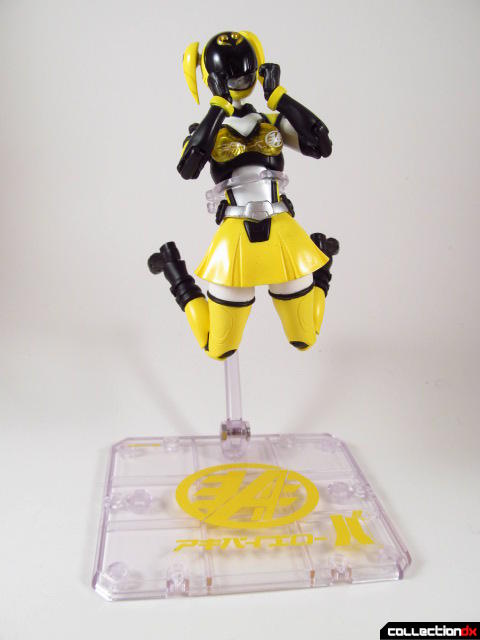 As with Akiba Blue, if you want the stand for this figure you better pick up Akiba Red (and make sure it is the first release).

S.S. The extras for Akiba Yellow are pretty much the same as Blue and Red; she comes with three scarves and the Moe Moe Z-Cune. 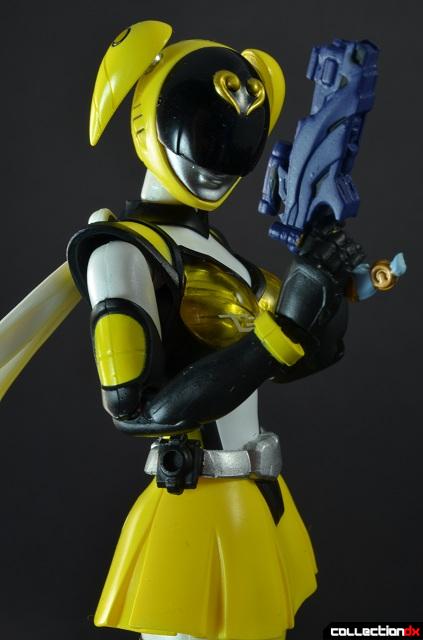 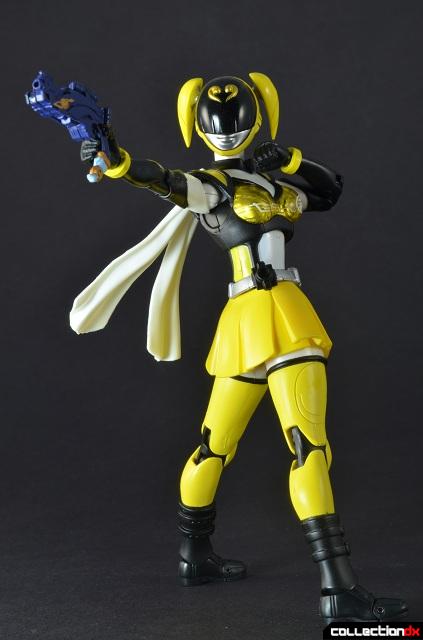 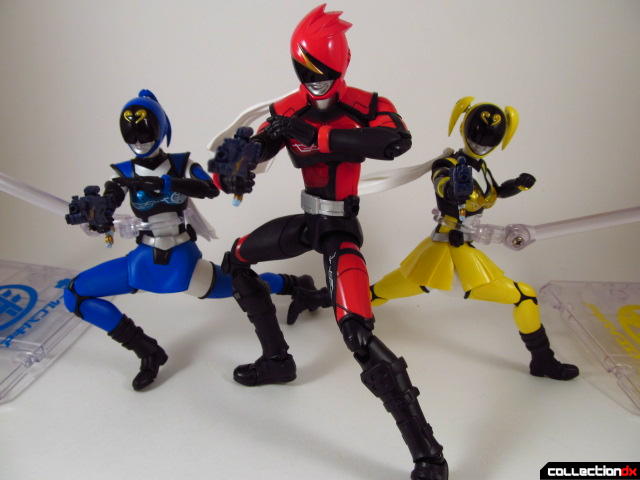 S.S. Finally, I have a full Super Sentai team! Akiba Yellow is a great figure on its own merits, but as a part of the collective Akibaranger team this figure is much more significant. She is the second female Sentai figure to be part of the regular line (non-Tamashii Web exclusive).  Furthermore, this is the first and quite possibly only time that Bandai will release the entire cast of a Sentai team as retail products in the S.H. Figuarts line. 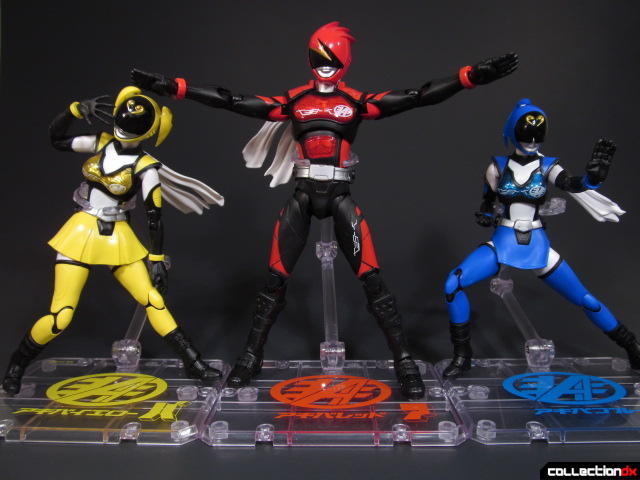 JM: This is also my first complete Sentai Team. Having Akiba Yellow by herself is totally cool, as every person has their favorite Akibaranger, but nothing compares to posing them all together as a team. I must say, if you are a fan of the show, you should really consider picking all three of these up. After all, they're so cheap; so expensively, cheap.

S.S. Do it quick! Before you guilty conscious convinces you need to buy Aoi-tan figures, hug pillows… and don’t forget the movie that is coming out on Blu-ray.

Jeez. I can't believe no one commented on this.