Wild Tiger is the main character in the anime series Tiger & Bunny. The show is set in the near future in a city called Stern Build. Within this universe humans have started developing super powers and are referred to as NEXTs. These heroes appear on a reality TV show competing for the title of King of Heroes. Because the heroes are on TV they have sponsors, whose logos appear all over their costumes.

The show is a lot of fun and has some really great character designs so I was VERY EXCITED when I saw that Bandai was releasing characters from the show in the S.H. Figuarts line. All I have heard and read over the years is how great this toy line was. The fit, finish, paint apps, and quality are supposed to be the very best that Bandai offers in the scale of posable figures. 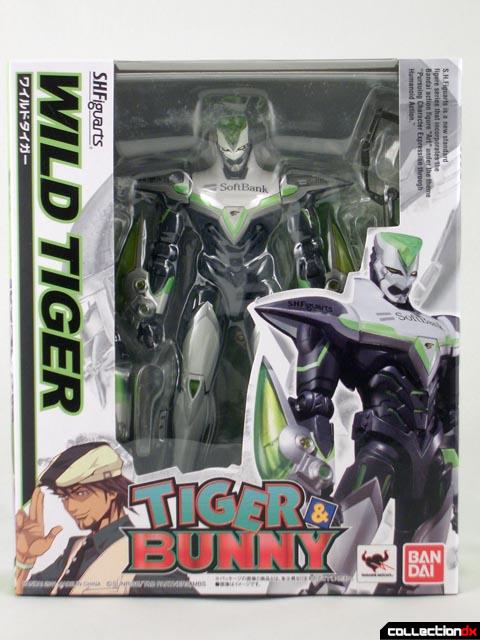 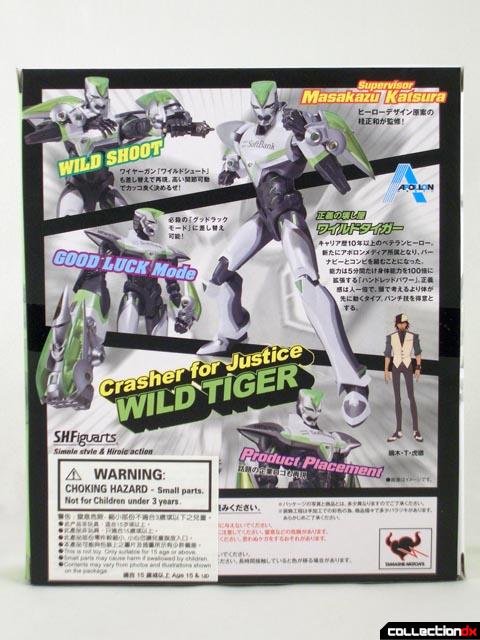 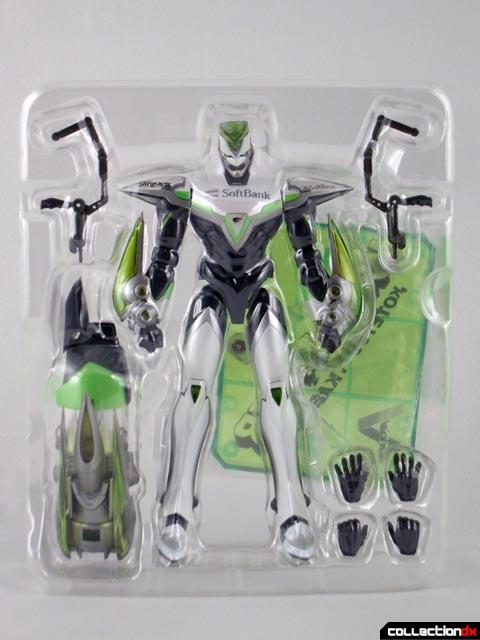 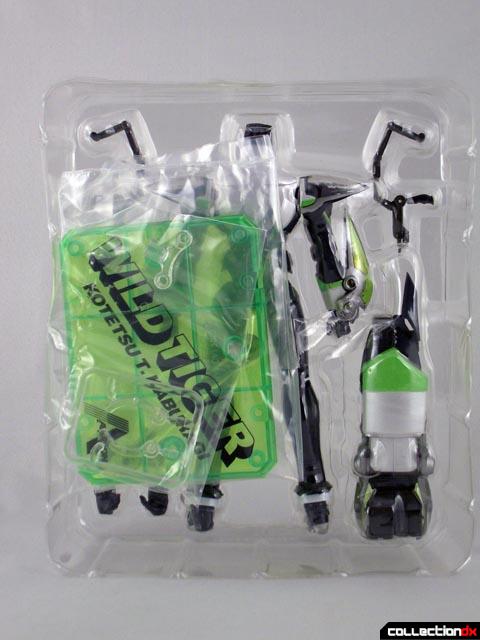 The package is nice but pretty standard four color box with a window on the front. The figure and all the parts and pieces are neatly laid out in its vacuum formed tray. I noticed immediately that they actually included a stand with the release. A nice touch! Also included are several different hands and his grappling hook/wire launchers 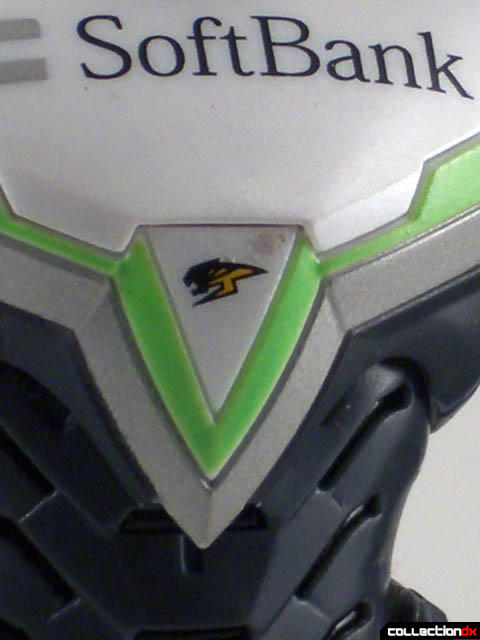 As soon as I get the figure out of the package I immediately notice there is some sort of misprinted spot/stain right in the middle of Wild Tiger's chest... 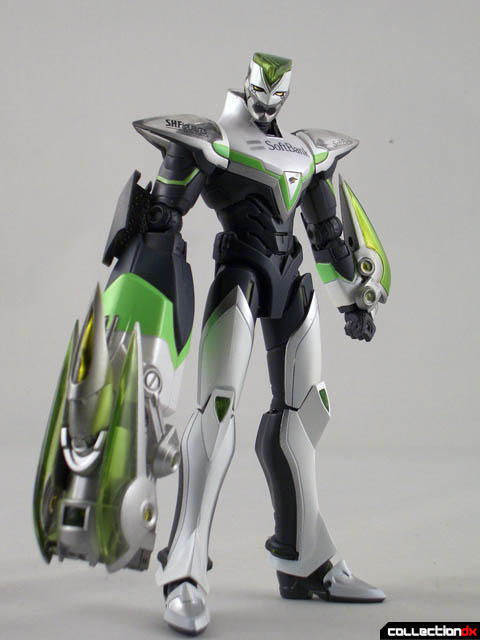 Well, so much for flawless QC and paint applications. At this point I was a bit annoyed and I shelved the figure for a bit. 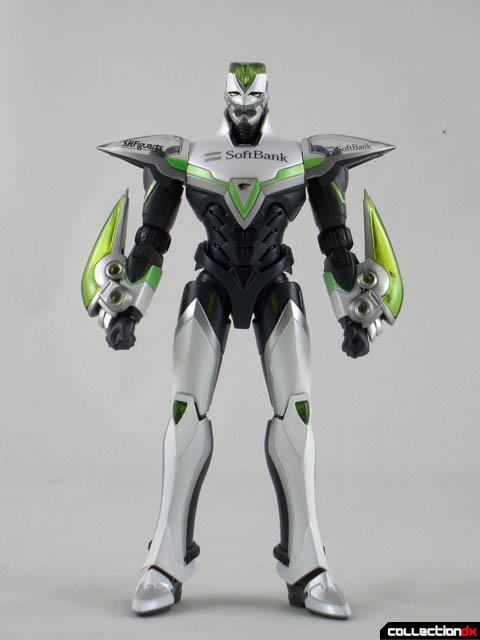 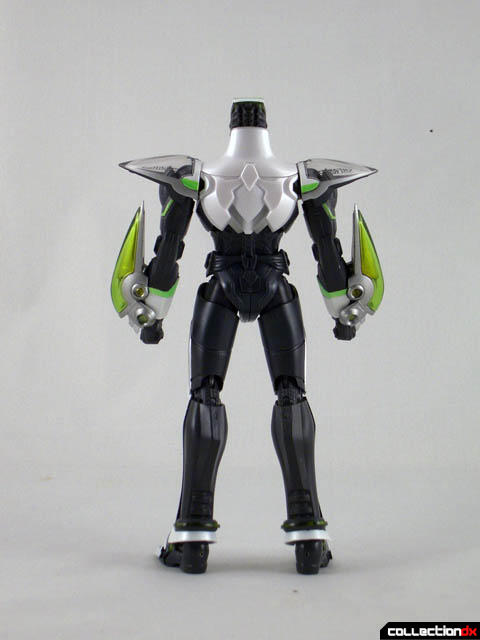 After a few days I start fiddling with the figure a bit more, and despite the glaring smudge on the front I am pretty impressed with the overall figure. The rest of the paint applications are excellent and the figure just feels really good in the hands. 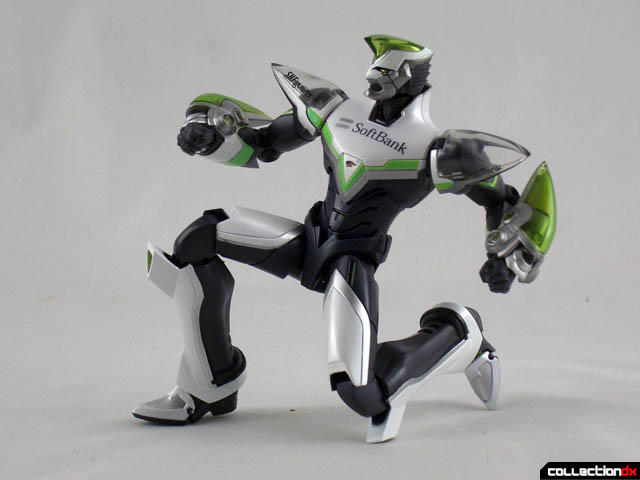 Articulation is excellent. Joints are located everywhere they should be and no pose is too tough to get him into. I especially like that the waist "extends" out a bit to allow a wider range of motion. 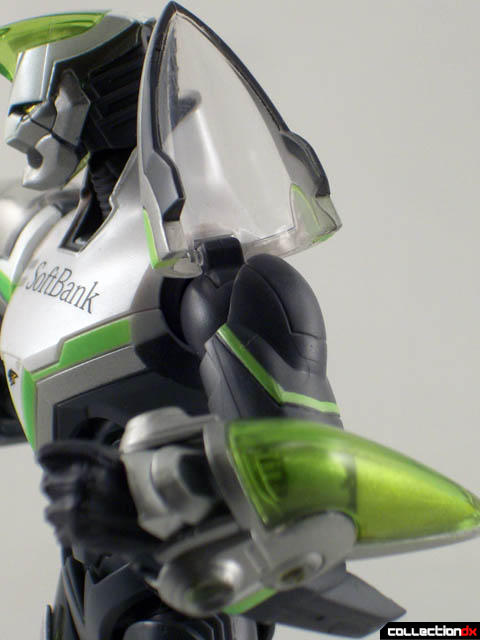 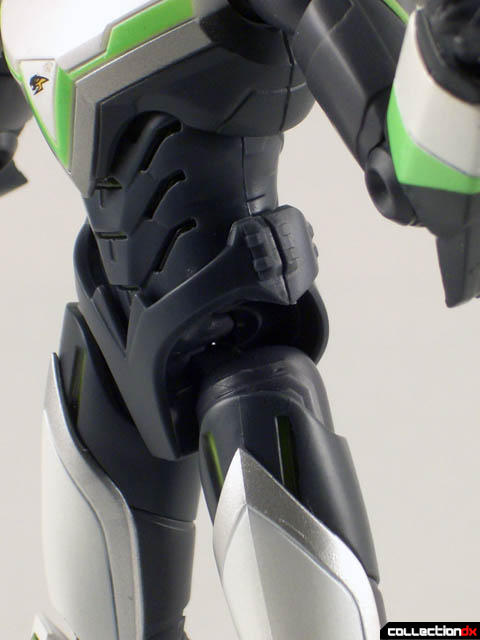 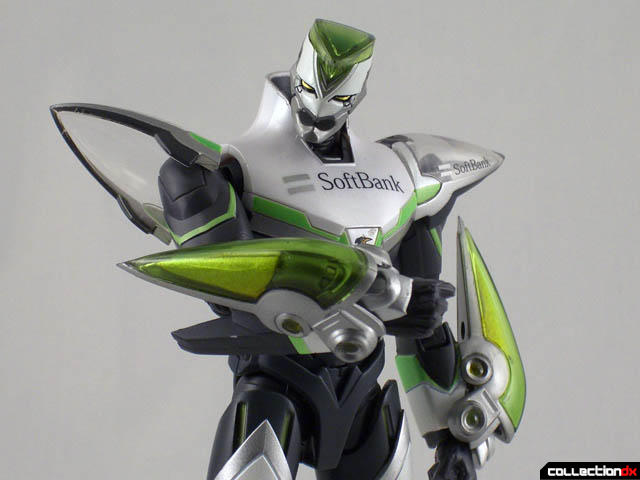 You can remove his right arm at the elbow and replace it with his "Lucky Mode" version. Since all the arm joints are nice and tight he can hold up his over-sized arm no problem. 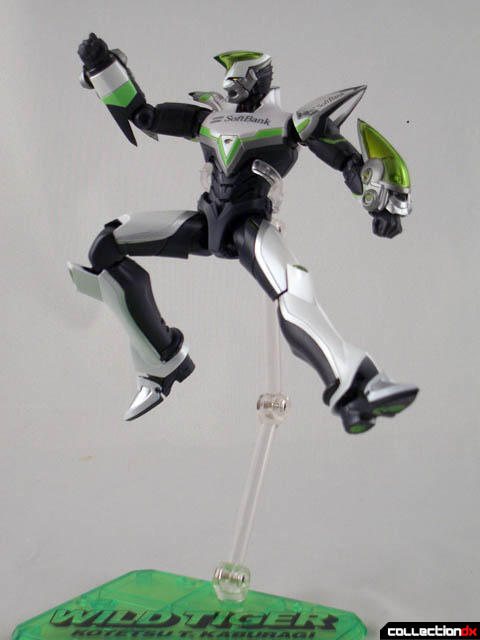 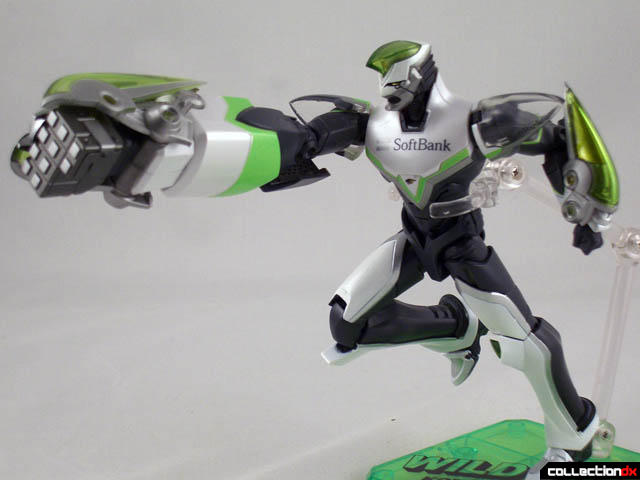 So at this point I am really loving the figure. Other than the smudge on the front it's really nice. I figure, I just lucked out and got the 1 in 10 that would have a misapplied paint application. I go to get one more pose of the character before wrapping up my photo shoot with it when... 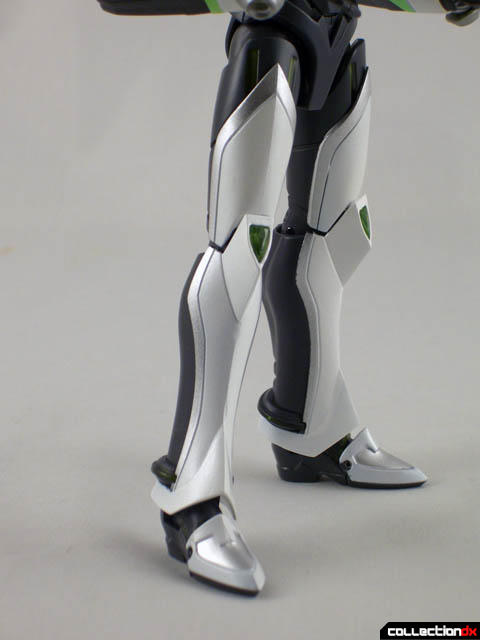 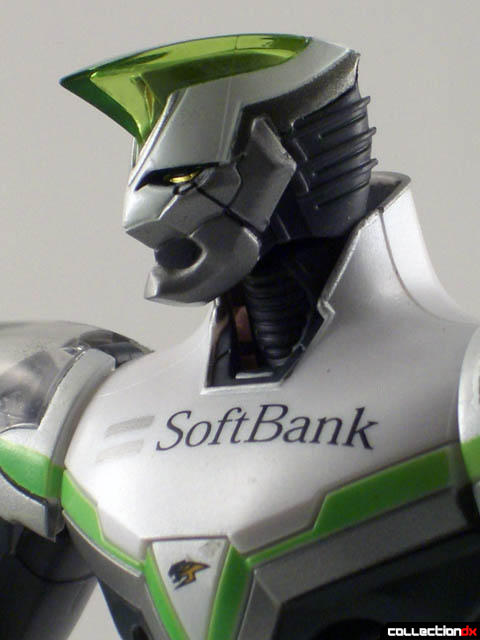 ...um... did his right leg just fall off?? Does it pop back on? Nope, it's completely sheared off the joint post that attached to the leg. As I bemoan this on Twitter I start getting a flood of folks telling me that it is a known issue with the Wild Tiger?! Sigh... 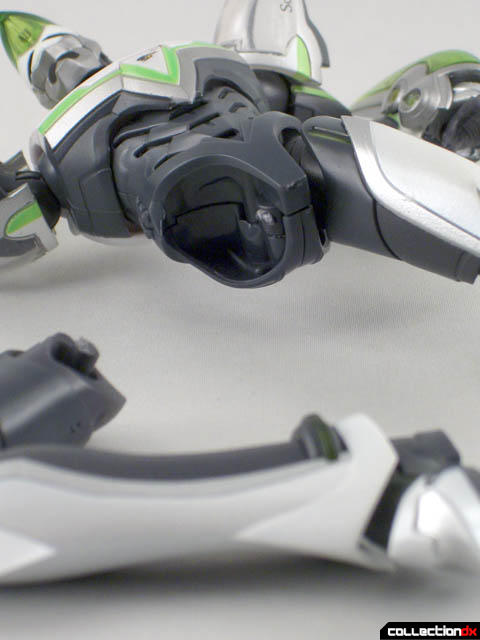 Well this turned out to be 45 dollars worth of disappointment...

They were unable to get me a replacement and Bandai told them they wouldn't replace or fix it either. So, I am left with a broken main character for a new series.

Yeah I cancelled the rest of the line and I am strongly suggesting you stay away from this sub-line of the S.H. Figuarts line no matter how big a fan of Tiger & Bunny you are.

I'm sorry to see what happened with your Wild Tiger. I have had no complaints with the two Figurarts I own. Yes they are Kamen Riders, but there's actually a lot of variation between the various Riders. Sometimes a series of Riders will have one base body or shared parts but even then there's a lot of unique sculpts. I think what may have happened with Wild Tiger is the rougher plastic that takes to paint more easily may be more fragile. Most of the Riders use a more robust, shinier plastic.

I hope you don't swear off Figuarts completely. I'm sure there will be a V3 down the line :3

So yeah, this toy's managed to become quite infamous at this point. I have to definitely admit my disappointment that Bandai released this toy with such a glaring problem. Although Figuarts are not perfect and have had issues such as warped legs, floppy knees, and loose ball joints, those problems were also from several years ago and it should have been safe to say that the Figuarts line was past problems like this. However, instead we have this huge Wild Tiger problem with the right leg snapping off.

At the very least, I'm assuming that this problem has been fixed in the factories though. Wild Tiger's been reissued twice since he's been released originally in September, so hopefully that means that the break was only a problem that was in that initial run of figures, and that the later waves of Wild Tiger will not have this problem, similar to the warped legs that a lot of the Kamen Rider Kabuto Figuarts featured.

It's a shame, but hopefully an isolated incident at best.

Thanks for the heads up ! I was actually considering picking up the Tiger and Bunny figuarts , because I have enjoyed the episode or two of this that I have watched and did not want to have to pay secondary market prices for these if I ended up watching the rest of the show at a later time.
Definitely gonna steer clear of them now.

Atom, I am really bummed to hear about your experience. I want to counter your "don't buy this toy no matter what" with my own experience of the toy. I love my Wild Tiger figure. No paint app issues. No breaking joints (so far!). And I LOVE the visual design more than I care to share ;)

I definitely think it is worth buying if you like the design. The price is a bit steep... I would have preferred a $35 price point but that is out of my control.

Tiger & Bunny is indeed an excellent anime, but it's just a shame (and somewhat ironical) that the toys are having this kind of problem. I just hope they have fixed these problems by the release of Origami Cyclone and Lunatic (which I hope don't become part of the Figuarts Zero line).

Curiously enough, I was in a dilemma to get this figure or the D-Arts Rockman X Full Armor and, after seeing the episode of CDX in that you told us about the leg problem, I decided to get the Rockman X figure. To my bad luck, my Rockman X also had a problem more or less like this, but with the arm. I can fix it, but articulation will just suck.

Acessory-wise, I think it was nice to include the base, specially given the "Lucky mode" arm, but I think they could have included a spare head with Kotetsu's face.

does suck so bad when a figure loses a leg or something. At least it is 45 bucks lost. I go crazy that so many of the new toys seem to have these issues and their in the 100-300 dollar range.

my condolences about the hip joint, i had a similar situation with my Shin Ichigo, but it was sorted by BBTS with a replacement. my Faiz is fine, i think it might be a newer Figuarts issue in general? Also, lemme guess, no die cast in the feet either?

AWWWW....this whole review was totally exciting until the end! Man, that sucks. This thing looks awesome! Never seen the show, but the design is totally up my alley. Sadly though, at that pricepoint, I don't really wana risk it with a history of breakage.

While I'm not into T&B, it does suck to get a toy that you waited for, only to break and then make you swear off the line.

I don't get why Bandai doesn't use metal in the hip joints?

I have an idea on how to fix Wild Tiger's leg. I know this process works because I used it to fix one of my own figure's leg. here is the tutorial. I apologise in adavace about the lack of words but photo bucket won't let me add discriptions.
On topic: If I had the money at the time of the pre-order I would have bought this guy in a heart beat the colors are very sharp ( minus that stain thing) and it has awsome articulation. Thanks Atom for another fantastic review.

Collecting Japanese action figures are always going to be risky. I bought a Wild Tiger at a markup, it's not perfect with seam lines and a paint splotch on the foot. I would hope BlueFin Corp would help out a US Customer.

I believe that if you did buy it from one of the stores that Bluefin distributes to, you can contact them and they should be able to help you.

I really have to say this, While I am sorry for your defective toy and enjoyed your review you really shouldnt tell others to steer clear of a complete line based on the very first figure of the line. Its not really fair to bandai or to anyone that was thinking about purchasing this toy. As a reviewer on a trusted site your word carries a lot of weight and already we have people thanking you for the warning and are not going to buy any of these either.

I got my Tiger via BBTS, not sure if its second production or not but I had no problems you mentioned in your review. I have fiddled with him for quite some time and nothing has broken, in fact i wasnt even aware of the problem till I read your reivew.

However, even if there is a QC issue with Tiger, doesnt mean the whole line will be crap!! And you, as a reviewer, shouldn't be making such comments.......yeah yeah freedom of speech but very damaging. Maybe they have fixed the problem or on an isolated few had this problem....... now people will listen to you and miss out on a cool figure.

beyond what you mentioned I have my own issues with Tiger, but this is primarily design issues as some articulation is limited to his chest armor.

And for all who are still interested and manage to read my post, he does have Diecast feet!! and he can hold that massive fist thing with no support!! Lets support the line if you like the designs and if this happens again then maybe thats a time to stay clear from others..... till then give em a chance.