This figure has been provided by HobbyLink Japan (Hlj.com).

Within practically every Super Robot Wars game and its spinoffs are original characters and machines known collectively as the Original Generation or OG. They are very much the glue that holds the well funded fanfiction that is the Super Robot Wars franchise together. Having received their very own Game Boy Advanced and Playstation 2 games, OG has become its own little series with several anime adaptations (of varying quality) and its own merchandise.

Super Robot Chogokin is by design a kind of "budget gokin" line of action figures. While not as feature laden as the more deluxe lines such as Soul of Chogokin or Soul Spec (may it rest in peace), Super Robot Chogokin gives collectors high-quality figures on the same level as Bandai's Robot Damashii or SH Figuarts lines with a decent helping of diecast thrown into the mix.

So it goes without saying that the two most recognizable mecha from Super Robot Wars would get their own entries in Super Robot Chogokin. Never mind that both of these mecha are actually classified Real Robots within the series but in the end only us dirty gaijin care about such silly categories of robots. One of these robots is the Weissritter (White Knight in German). The pilot of Weissritter, a bodacious babe named Excellen Browning, affectionately calls her machine "Weissy" (or "W-Chan" in Japanese). Weissy is well known for its long-range firepower and aerial maneuverability. 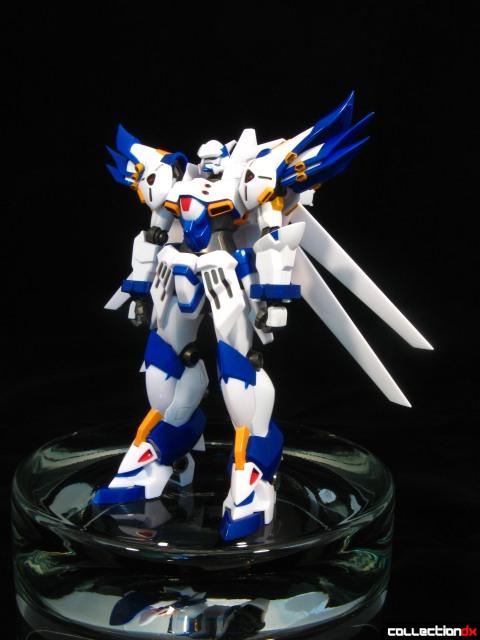 And so we get the Super Robot Chogokin Weissritter. The toy itself is billed as being a 140mm tall action figure filled with character and a small helping of diecast metal parts. The most visible pieces of diecast would be the calves with are solid gokin. Other diecast pieces include the hips, ankles, and parts of the shoulder armor. Now astute OG fans will notice that this particular rendering of Weissy is much more svelte than the original artwork. I guess they figured a woman's robot should look a little more womanly. 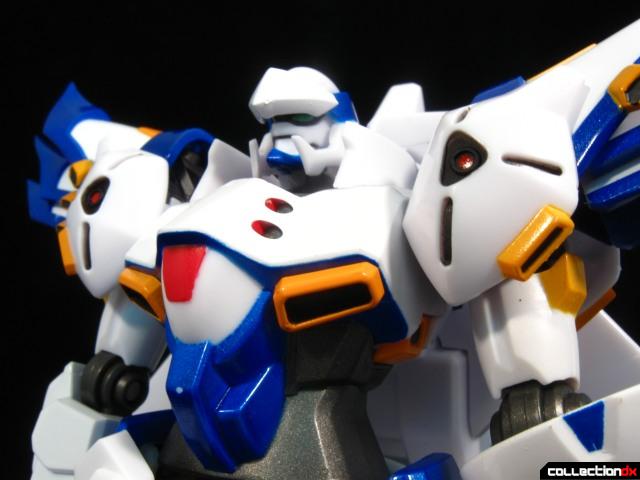 Like any good Bandai product, Weissy has tons of crisp paint apps for all the little details of the figure. While there are a few small imperfections common to mass produced toys, everything is generally well done. The paint on the face is especially nice although the sculpt has made Weissy's forehead piece obscure the eyes from most angles. Also the default head fins are made of rigid ABS plastic. I would recommend switching these to the included flexible PVC fins as moving the head will make the fins bump into the backpack. During the photo shoot I found a nasty bend on the ABS fins just from posing so beware. 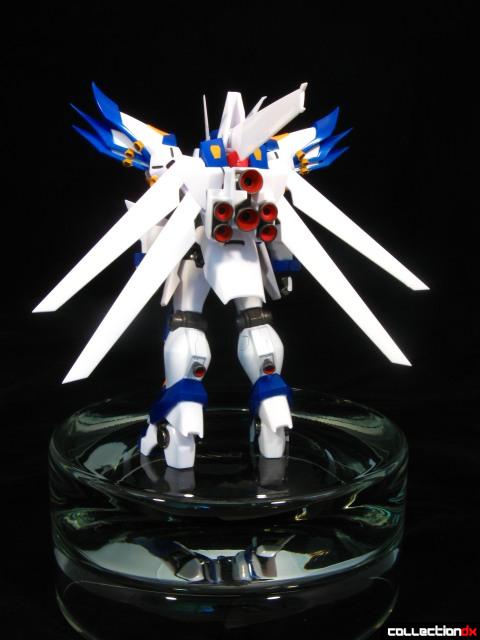 As befitting a flying machine, Weissy has a nifty array of verniers on its Tesla Drive backpack on its calves. 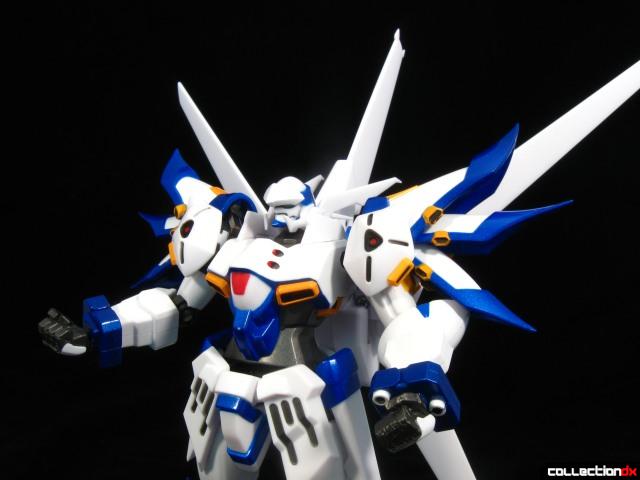 All five wings on the Tesla Drive can move. Also Weissy's multi-segment pauldrons can be splayed out. 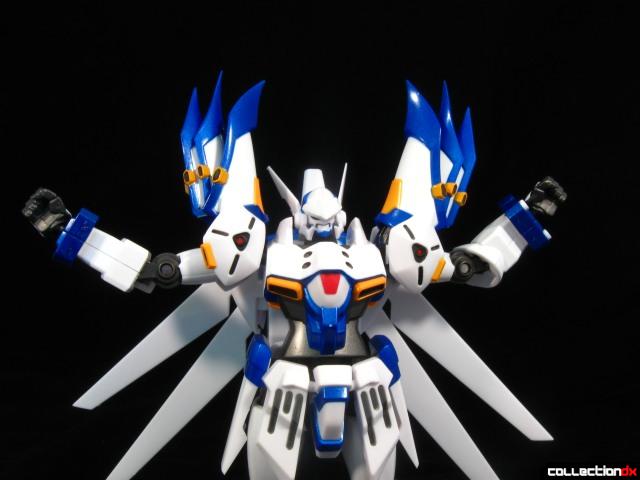 The pauldrons are also hinged so they can move up completely. Both elbows feature a pull-out double joint for extra bicep curl. I've found the pull-out joints to be difficult to extend and trying to do so may pop the forearm off the bicep like I do in the video. The forearm will just reattach with no problem though. 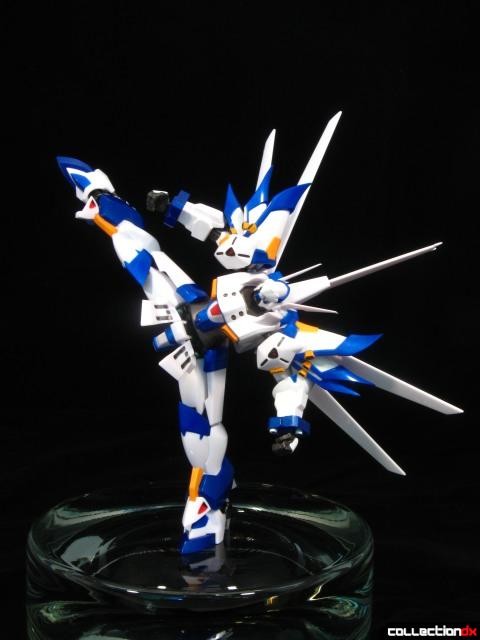 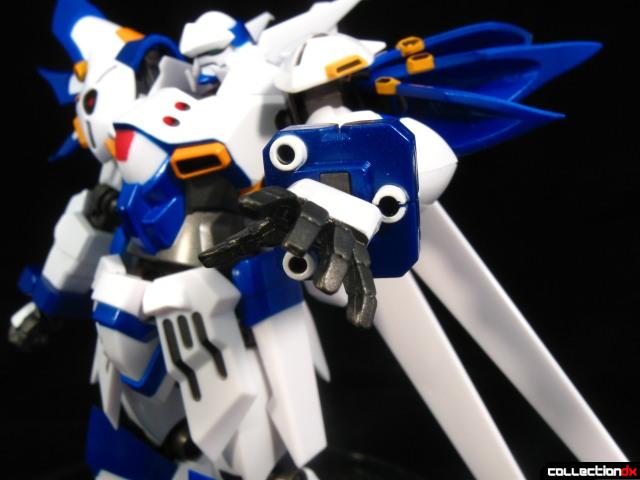 Weissy's accessories include several different pairs of hands such as splayed hands. These pop on and off the wrists with no trouble. Now again, astute OG fans will notice that Bandai has redesigned Weissy's wrist beam cannons so that now they appear to retract. The cannons are now positioned around the hand rather than slightly above it. 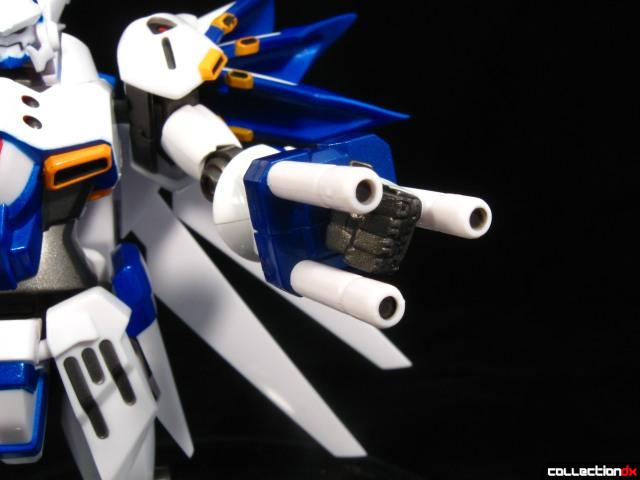 Because of this change, Bandai has included an alternate wrist cuff with the beam cannons extended. Unfortunately because of the revised position of the cannons, the right hand becomes pretty useless with the extended barrels surrounding it. It's no means a deal breaker but it is an odd design choice in comparison to say the Kotobukiya Weissritter kit which follows the original artwork. The whole wrist cuff simply clips on and off. The left arm also features a removable wrist cuff so you can clip the guns to that arm as well. 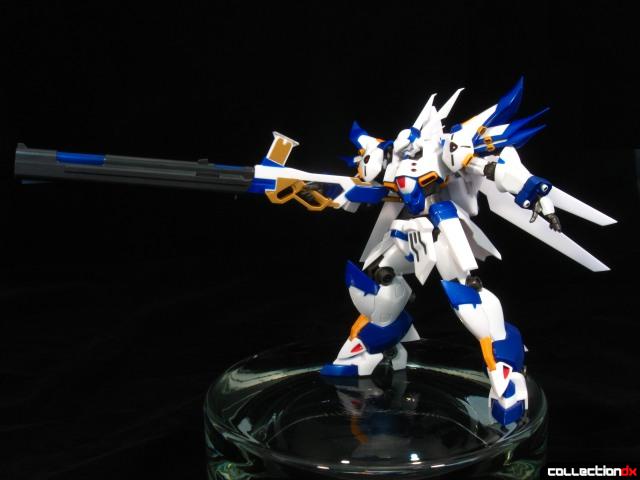 As far as weapons go, Weissy comes with her signature Oxtongue Rifle. This massive gun features the same kind of crisp paintwork as Weissy herself. 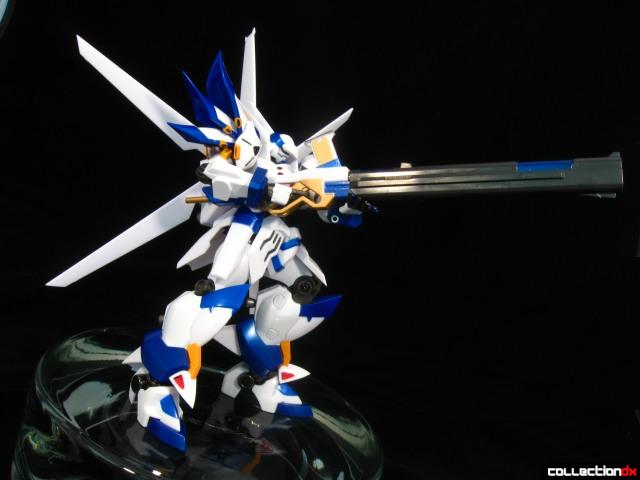 Weissy can hold the Oxtongue with two hands for extra stability. Also note the extending knee joint on the left leg. This allows for a little more bend for poses. 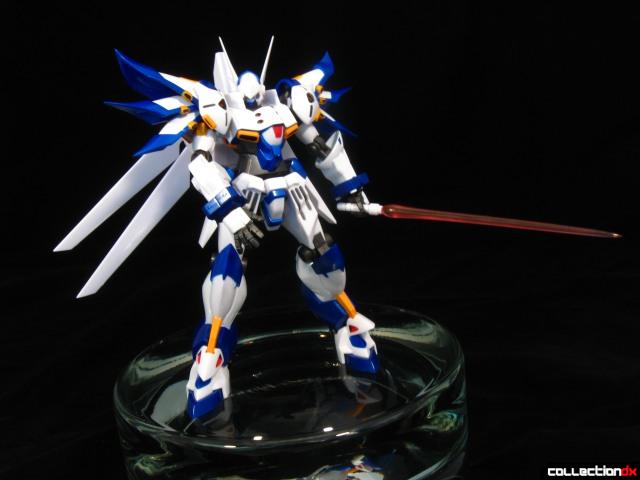 Like every good Real Robot, Weissy comes with a beam sa... er Plasma Cutter for close combat. She has a pair of hands specifically for holding the Plasma Cutter. 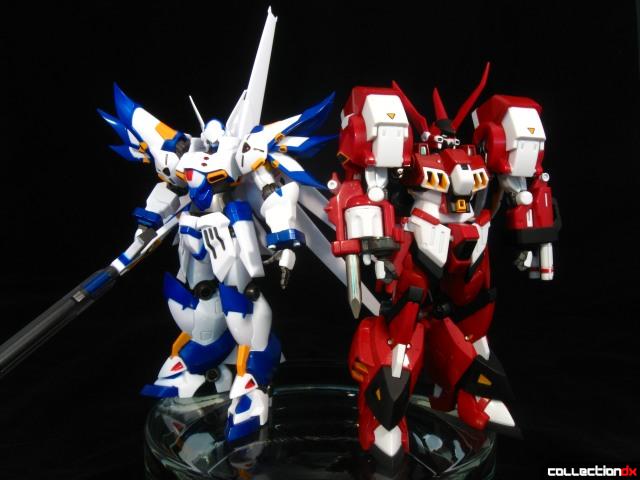 Weissy looks especially good next to her chunky husband, the Alteisen. You gotta get both so you can get your Rampage Ghost on. 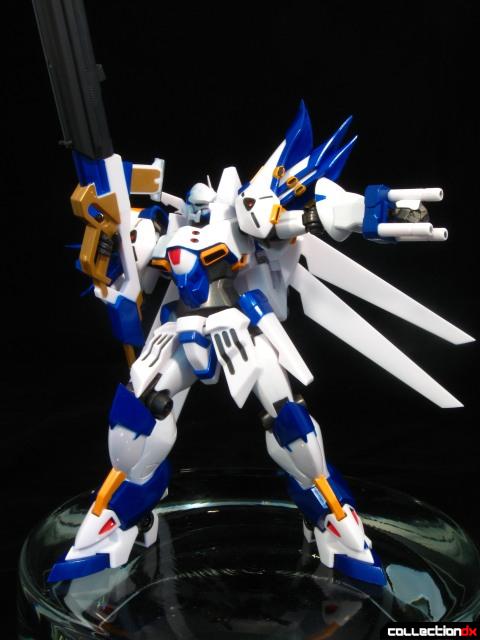 Overall the Super Robot Chogokin Weissritter is another real winner. My only real objections are with some of the changes to the design and even then it's not that big a deal because really this is the Weissritter toy we've been waiting for. Practically everything about the toy is solidly engineered. Even though it is marketed as budget gokin, there is nothing budget about it. Definitely pick this one up if you love Weissy.

3 comments posted
The design is based on the

The design is based on the recent OG anime ("The Inspector"). Newly released Composite ver.Ka Cybaster is also using design from that anime.

Good to know the Weissritter and Cybuster designs use the form from the anime, I believe most people don't know that. I bought Cybuster but was wondering that it somehow was different from the artworks...

I was looking forward to getting Weissritter, coupled with Alteisen it really makes an awesome display piece and then there's also that gigantic rifle... just a shame my money ended. At least, I expect it to last long before discontinuation hehehe. Thanks for the review!

This little lady remains one of my all time favorites, and it's hard to explain why. This is one of those figures that just pops in the hand or on the shelf. The colors. The design. It grabs the eyes and attention. And it's a fun figure to mess with if you can avoid bloodletting. I do recommend investing in a stand for her, just because she is a figure that really does look better in posed flight.