Dai-Guard follows the exploits of the titular mecha and its team of support staff as they counter the Heterodynes, inscrutable, abstract alien beings, totally unlike Evangelion’s Angels, who threaten Japan.

Dai Guard is one of the more realistic shows of the genre. Not in the gritty, This is the Price of War sense, but in the Giant Robots Aren’t Sensible Weapons sense. Its plot and characterizations are rote, but the show’s preoccupation with the logistics of giant robot warfare is uniquely compelling. Our heroes aren’t larger than life soldiers, but corporate office drones. Dai Guard spends more time broken or impotently standing around than engaged in combat. Killing the Heterodyne often takes less effort than just getting the damned robot put together and to the site of the threat, and after the confrontation our heroes are left to sort through the legal and economic implications of destroying parts of an occupied city. This may not sound particularly entertaining, but it works. The overall tone is lighthearted, as the well-meaning team of bureaucrats bumble towards competence and heroism.

There was never a proper Dai-Guard toy, not even a model, until now.

The figure is packed in a compact glossy box, with foil lettering in place of the usual die-cut windows. I prefer the foil. 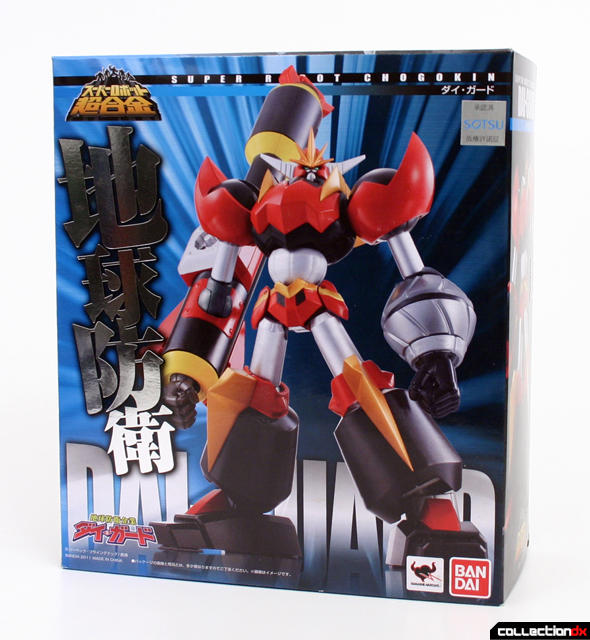 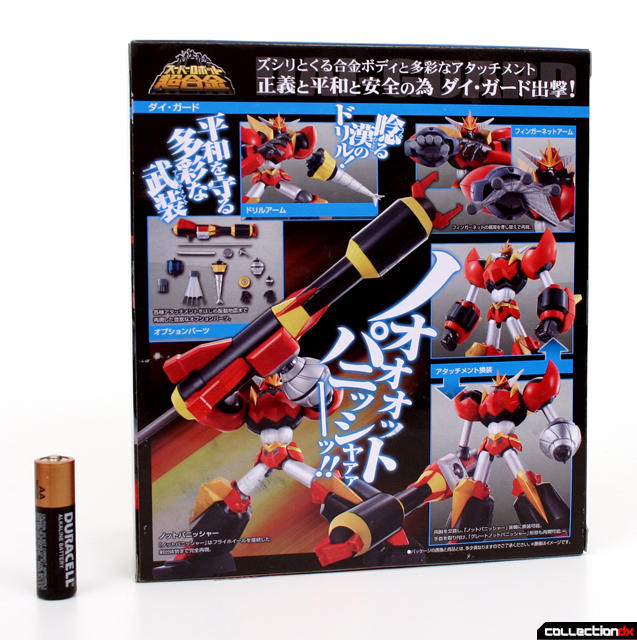 Inside, a two-tiered clamshell. 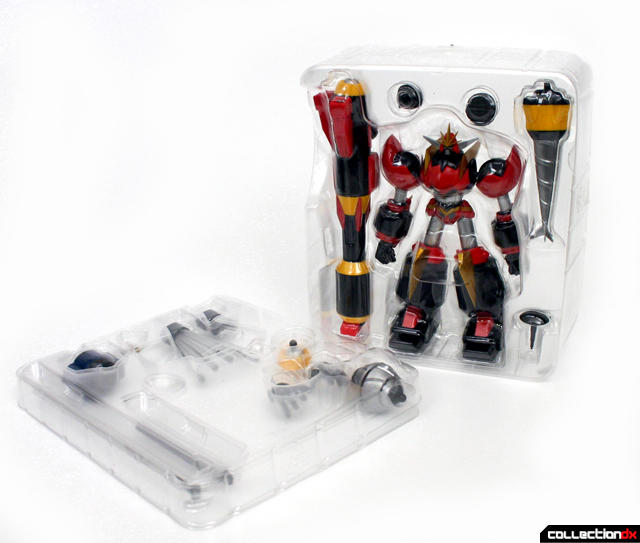 First off, the heft. This thing is insane. Many of Bandai’s modern Chogokin toys are criticized, and justly so, for being gokin in name only (GINO? maybe not he best abbreviation), possessing merely token quantities of metal. Not so, here. Those giant lower legs are all metal, giving the figure a rock-solid stance in any position. Thighs, crotch and chest are also metal, as are the shoulder and hip joints. 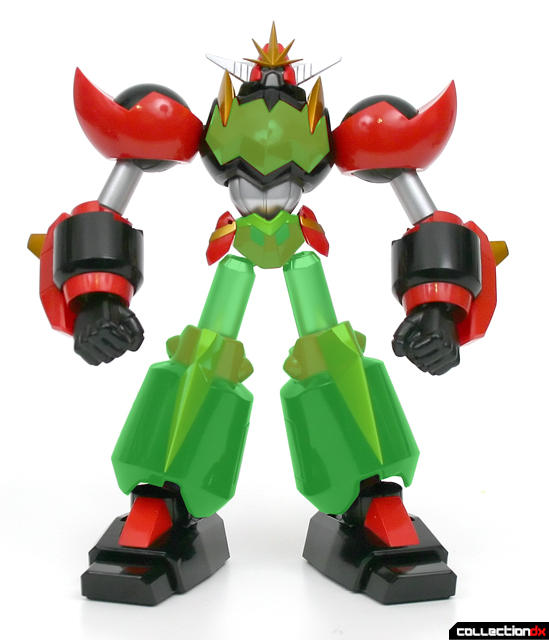 I need hardly mention that the sculpt, finishes, and materials are all top-notch, befitting an adult collectible. The gloss paint finish is exceptionally attractive. My one criticism would be the doughy head sculpt. The proportions and character design are a little cartoony, but well in keeping with the Super Robot tradition. 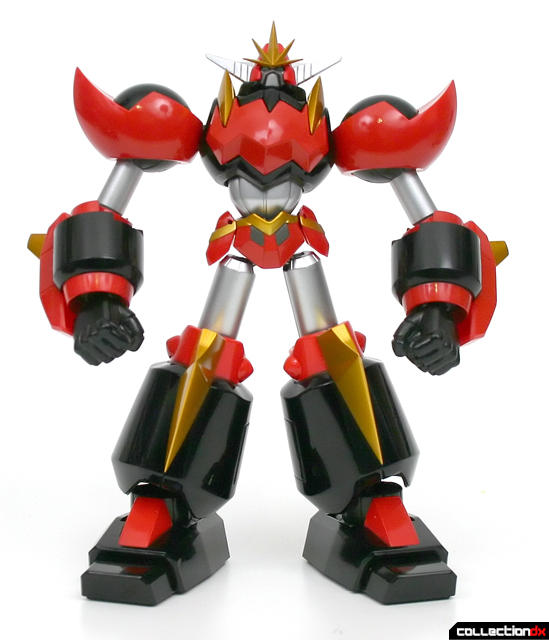 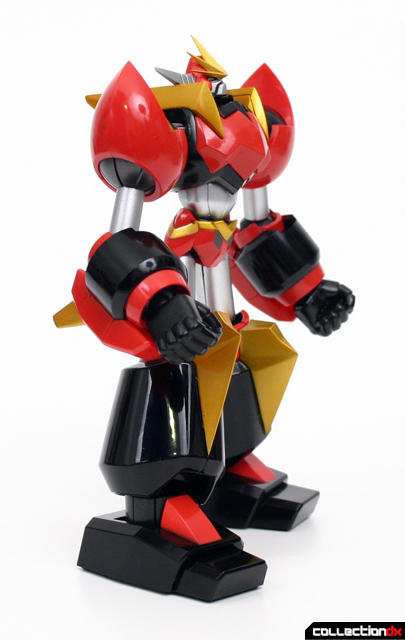 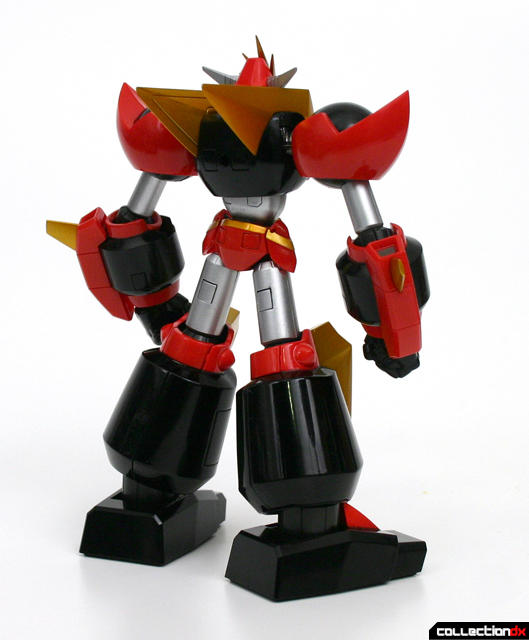 Articulation is impressive for such a blocky design. There’s more movement in the legs than you’d think. Chest and waist both rotate on ball joints. lower arms and legs feature Bandai’s now-standard collapsible joints. 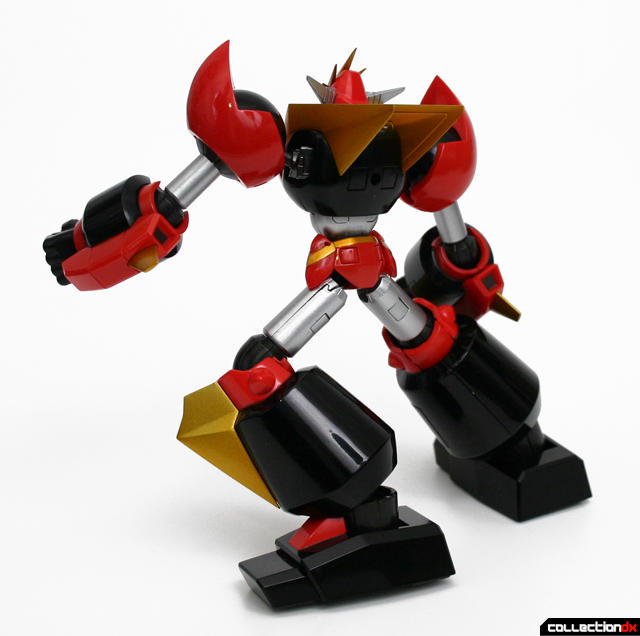 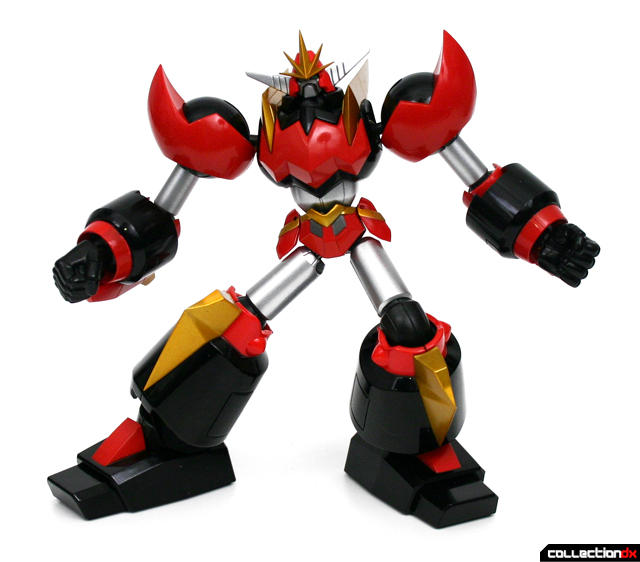 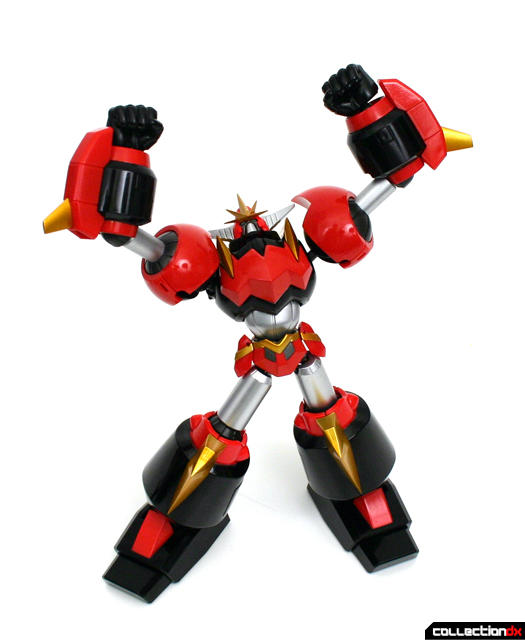 Shoulders rotate out on diecast hinges. These will come in handy later. 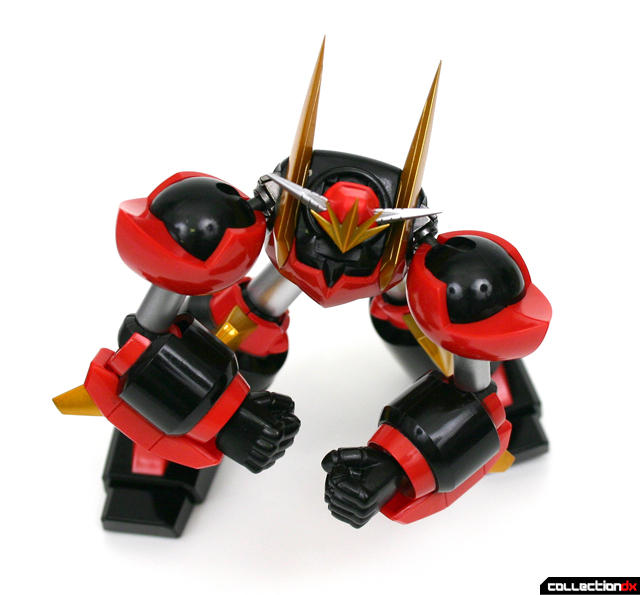 A full complement of arm accessories are included. While the SRC sets are typically more spare, this set feels more DeluXe in its comprehensive array of weapons. 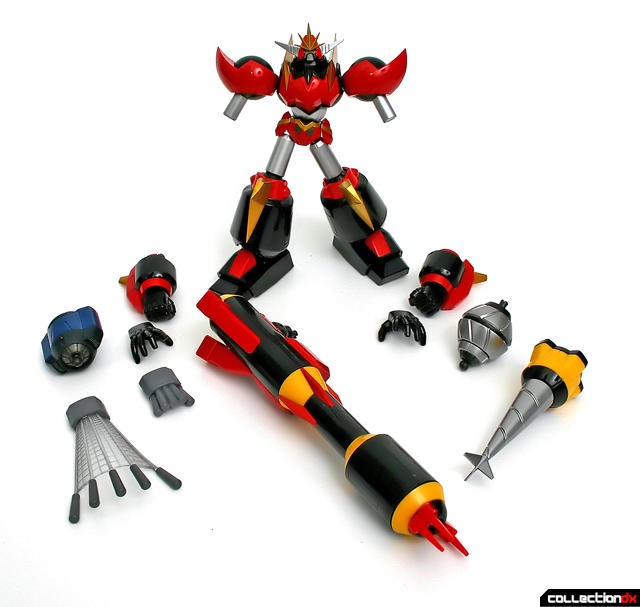 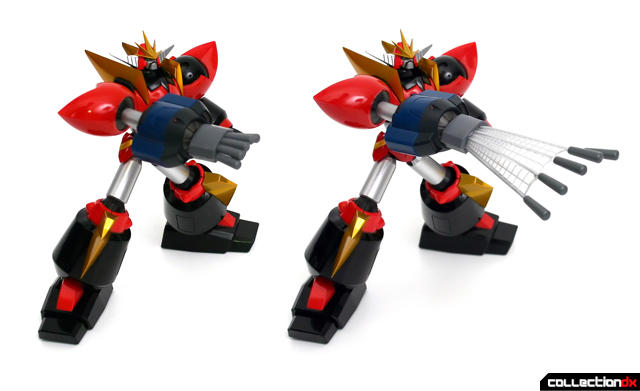 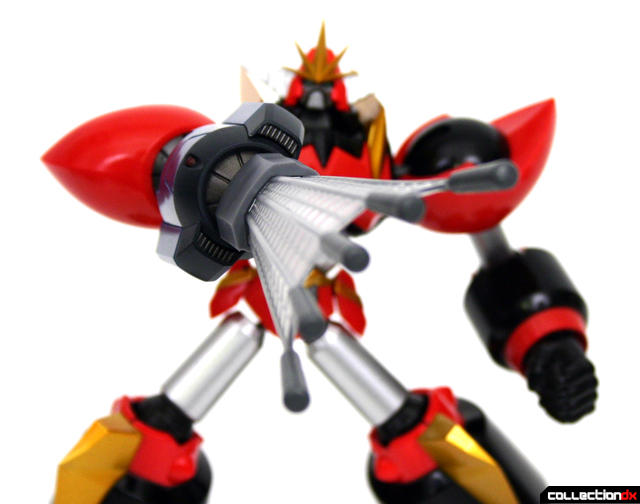 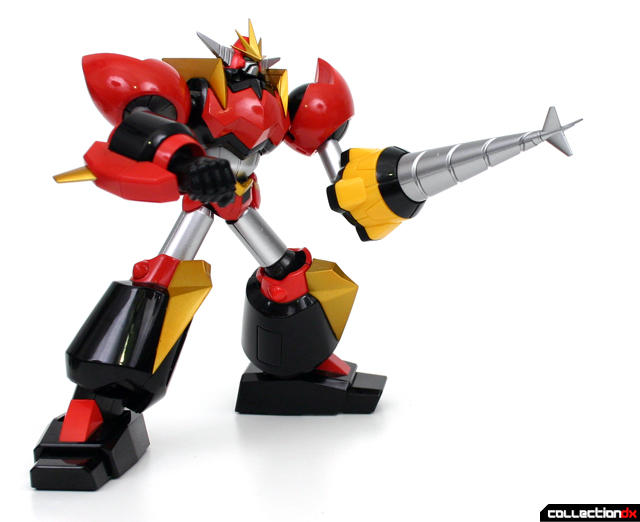 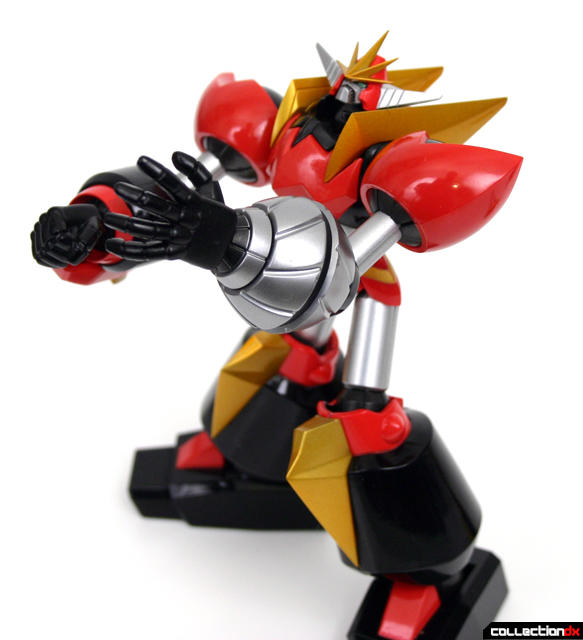 And the massive Great Knot Punsher. The Knot Punisher is designed to grab and then pile-drive a giant spike through a Heterodyne’s “Fractal Knot,” the source of the alien’s power. The GKP locks into both arms, somewhat limiting its articulation. But it looks cool and appropriately dramatic. 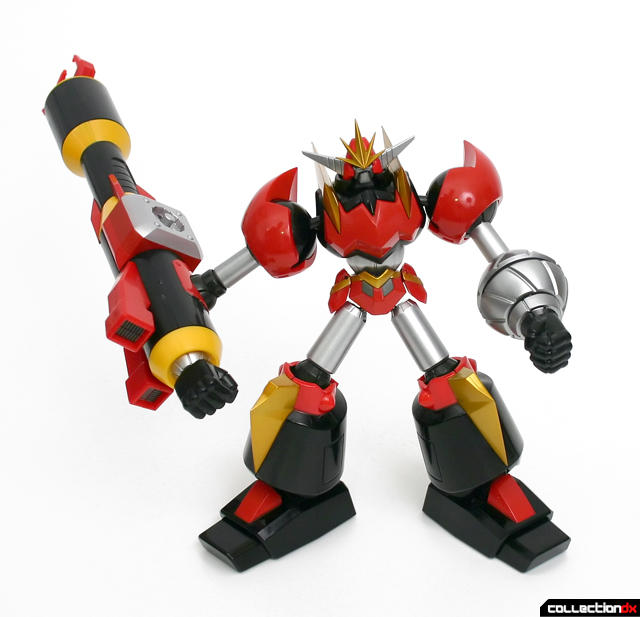 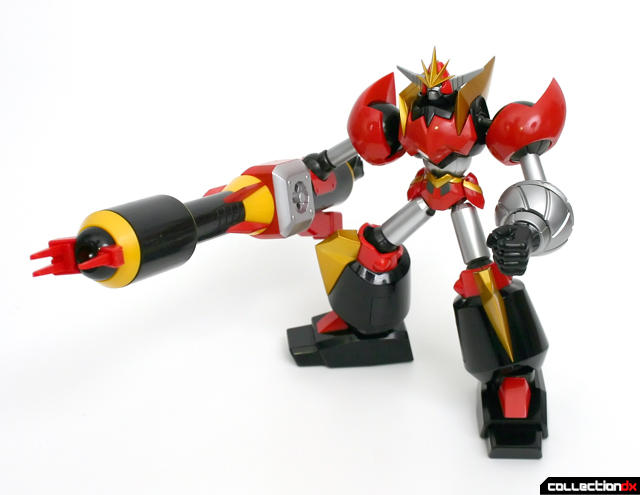 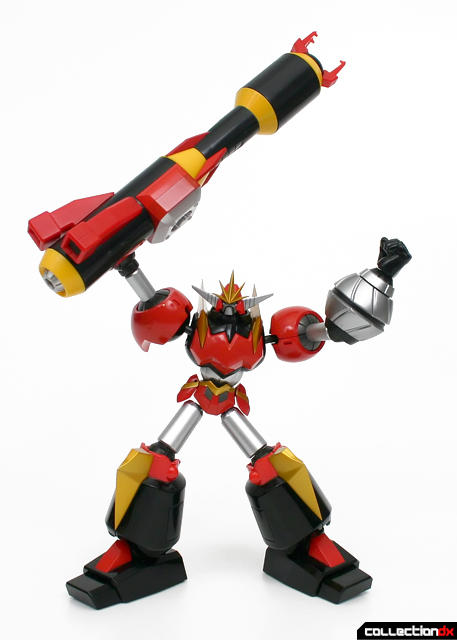 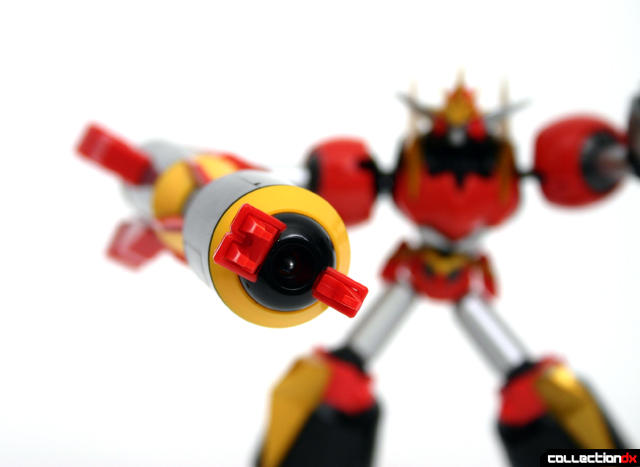 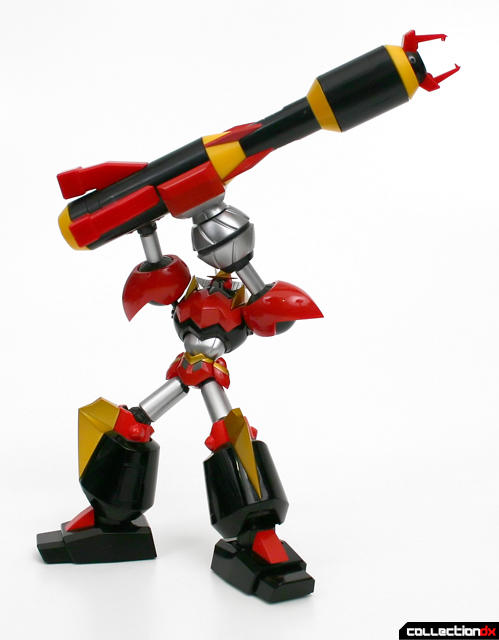 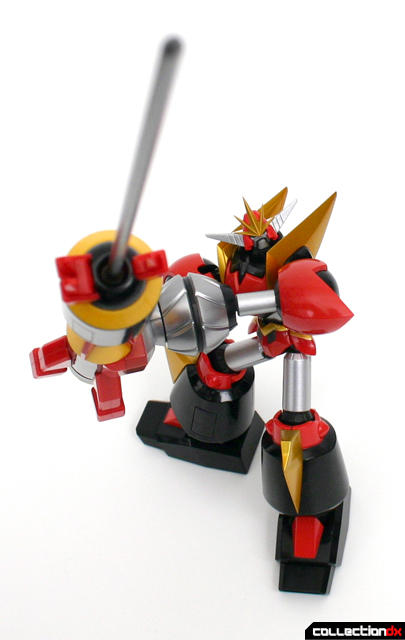 This set is another slam dunk for Bandai. Dai-Guard is fun and playable and looks beautiful in any position. As the Soul of Chogokin releases become more elaborate, soulless, and ridiculously expensive, the SRC series continues to provide a welcome alternative.

9 comments posted
The more I hear about this

The more I hear about this show, the more I want to see it.

I was disappointed that you didn't have a picture depicting this:

It really seems to be a good figure. The amount and quality of the accessories is nice for the price.

I never watched the show, but the design is really cool. I like how they made the thin arms and thighs together with big forearms and legs, without sounding cartoonish.

Having not seen the show, I get the feeling that all this swag looks more impressive on the toy than it does in the anime.

Re roboswag, amazingly no. Every item included with the robot shows up multiple times in the show, with its results or consequences well covered. The show is surprisingly "real world" grounded in unexpected ways. In spite of the pair of giant robots and the giant aliens. The characters are astonishingly real in unexpected ways. And it is one of the few Giant Robot shows to actually ask about the physics (and stupidity of) many common robot tropes. Take that drill arm for example. The scenes with it are amazing for how awkward, useless and unintentionally destructive the thing is, because it is a big honking drill arm spinning at thousands of rpm. Also noteworthy is the knot punisher and its earlier versions. The big honking pile driver weapon. It isn't a one and done super weapon or something from the finale. You watch the team develop and evolve the weapon over time. And once they find a weapon that works, they start using it, as their first go to option. None of this "ultimate attack" build up nonsense.

If you haven't seen it, it really is an often overlooked gem.

Have not seen the show but I actually bought this figure based on this review and the fact that I love the design. It kinda hits on all my Giant Robot loves.

This figure also makes my hope for SRC MegaDeuces even greater!!!!!!!!

Pretty funny how they have to deal with all the red tape, worth a watch good series IMO. . .
If you have lived the salaryman's life (or spent serious time in Japan) you will like it a lot !

A great often overlooked anime. A really distinct robot. What more could we ask? Okay I confess I would really love to see this guy given the SOC treatment. There is just something appealing about the lowest bid government contractor built and operated robot getting a top of the line Gokin that is oddly appealing.

One neat detail often overlooked. The extra parts in the tray allow you to assemble or display the robot configured for both the 2nd generation Knot Punisher (no hands, the claw piece on the flywheel arm, the pile driver piece on the back of the knot punisher and the weapon facing long way forward) and the 3rd generation Great Knot Punisher (the weapon barrel rotate to the rear and both the weapon and flywheel have retractable hands. No pile driver counterweight. ) The SRC Kokuboguar comes with the first generation "Knot Buster".