This character is from the Melancholy of Haruhi Suzumiya. I've never read it nor watched it and don't know anything about it. However, the mecha suit caught my attention 'cause its all "roboty" and red. The addition of a little girl in a bunny suit only adds to the craziness.

Since this is a Composite Ver. Ka figure, you get the standard window box with window-screened name. 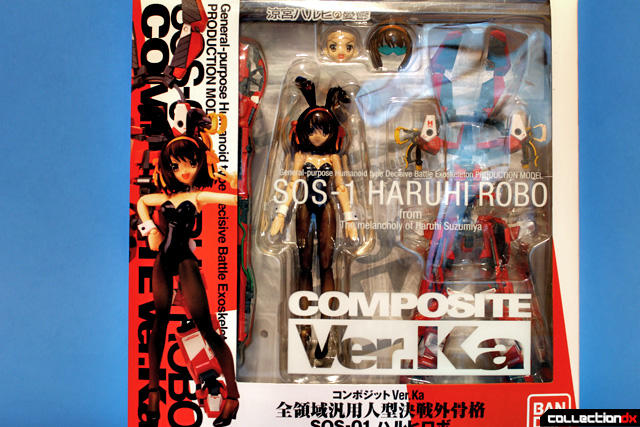 The figures come laid out on a neat modern plastic tray. 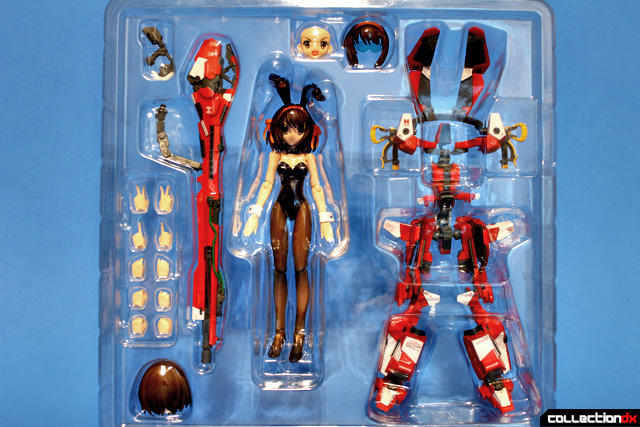 Now before we get to the really cool part, I'll start of with Haruhi who pilots the suit. She comes dressed in a little black bunny suit. I don't get it but I'm sure it's a Japanese thing. (To see more detailed photos of Haruhi, please check out the album) 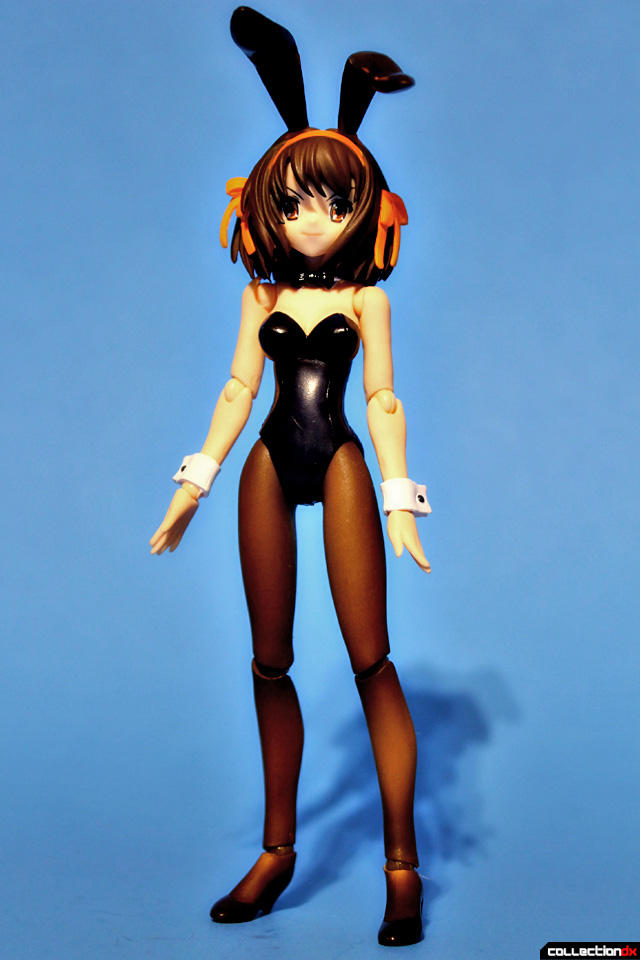 She's quite simple but highly poseable so you can put her in all sorts of cute Japanese poses. Yawn. 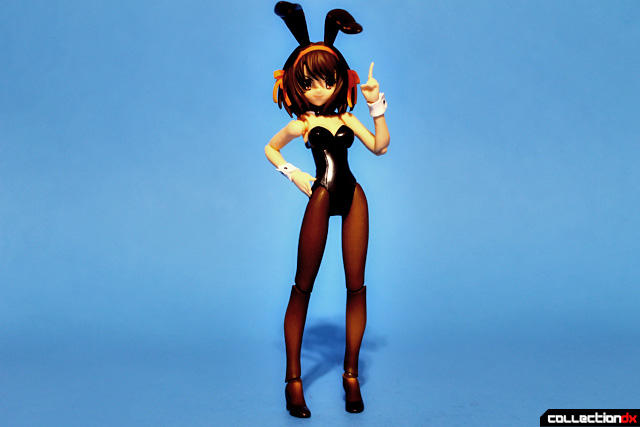 Maybe some action poses too. Yawn. 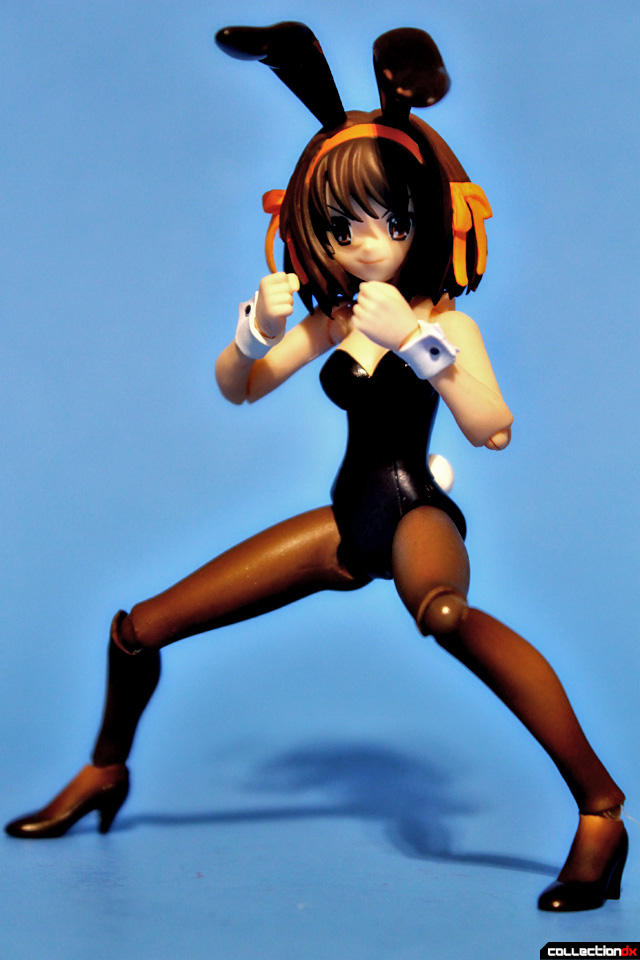 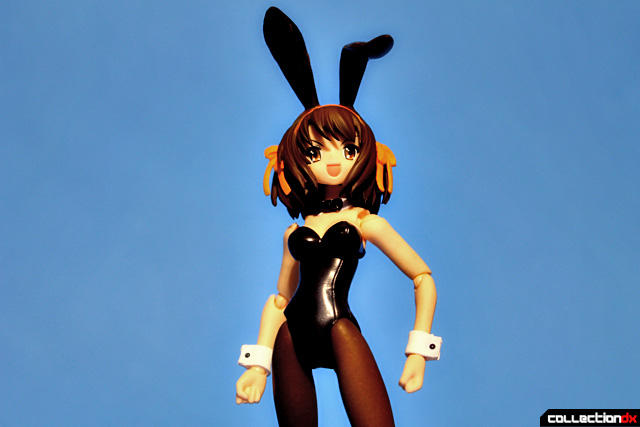 You anti-girl-figure guys still there? Ok cool, 'cause here's the good part. She comes with a suit that is described as "General-Purpose Humanoid Type Decisive Battle Exoskeleton Production Model" or G.P.H.T.D.B.E.P.M. for short. He stands on his own and carries a big gun. Yes those are robot bunny ears on top with yellow robot bows. Is it me or does it look like a carton of Marlboro cigarettes exploded on the mech? 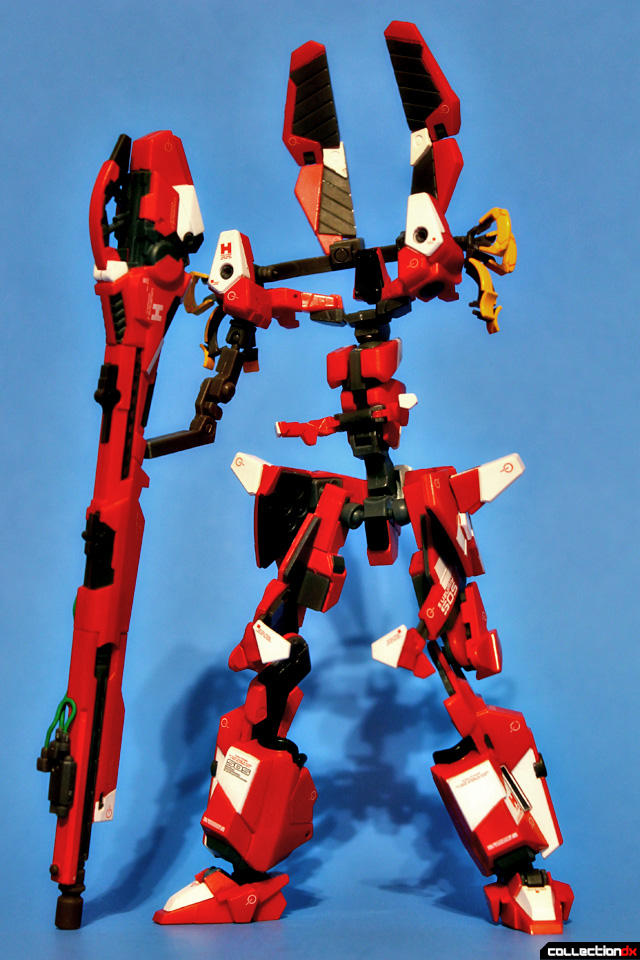 So Haruhi is able to suit-up and cause havoc. I don't get it. Maybe I would if I watched the show or read the manga, but it is a tad silly. Then again, it comes from the same place where a giant robot can turn into a small pocket lighter, a giant female robot can shoot her boobs and a ship can dock into a robot's butthole. 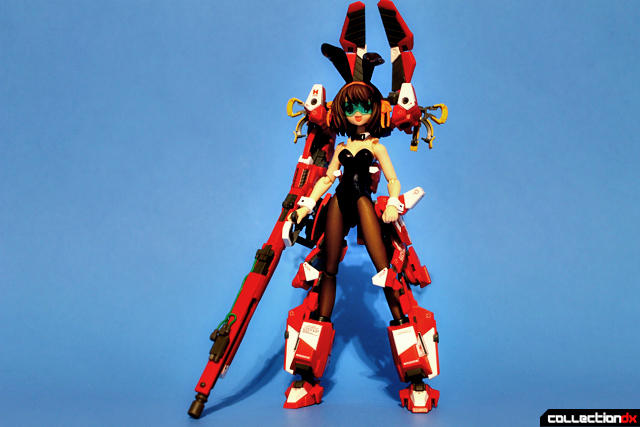 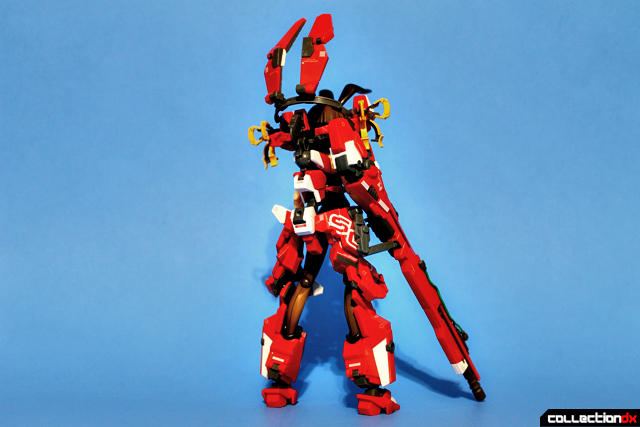 The suit is quite poseable even with Haruhi docked. 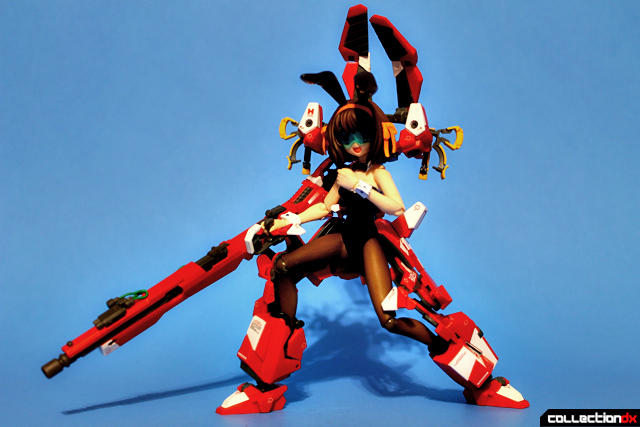 What really drew me to this was the suit design that has all the tampo printing and real robot aesthetics. If I'm not mistaken, the Ver.Ka line is designed by Hajime Katoki so it's no wonder it has all those little markings and such. Even though the robot is based off a bunny design, it still manages to look cool. 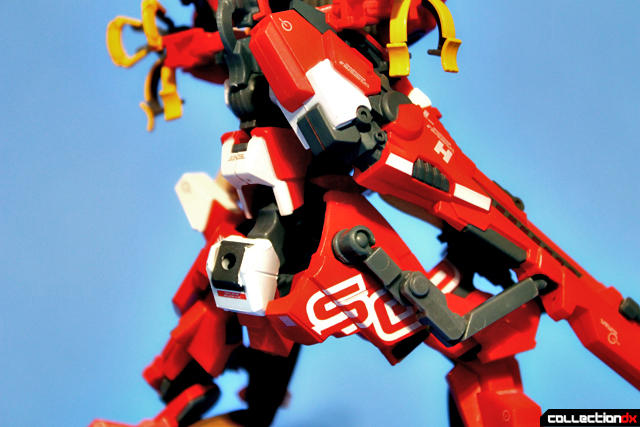 Here you see how the panels open up to allow her to be fitted. 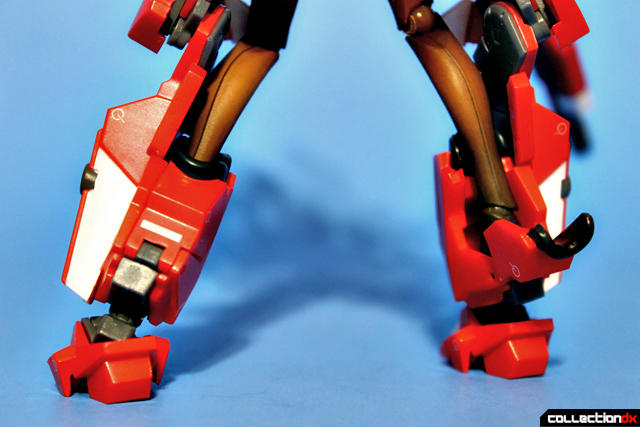 It's really not a bad figure if you can get over the cutesie side of it. I don't like one without the other. Haruhi alone just looks like a typical girl figure and the mech suit alone looks empty and soul-less. Like Lindsay Lohan. (Points for The Enthusiast reference?) Together they tie in very well I think. If you want to check out all the pictures I took of Haruhi, make sure to check out the album. 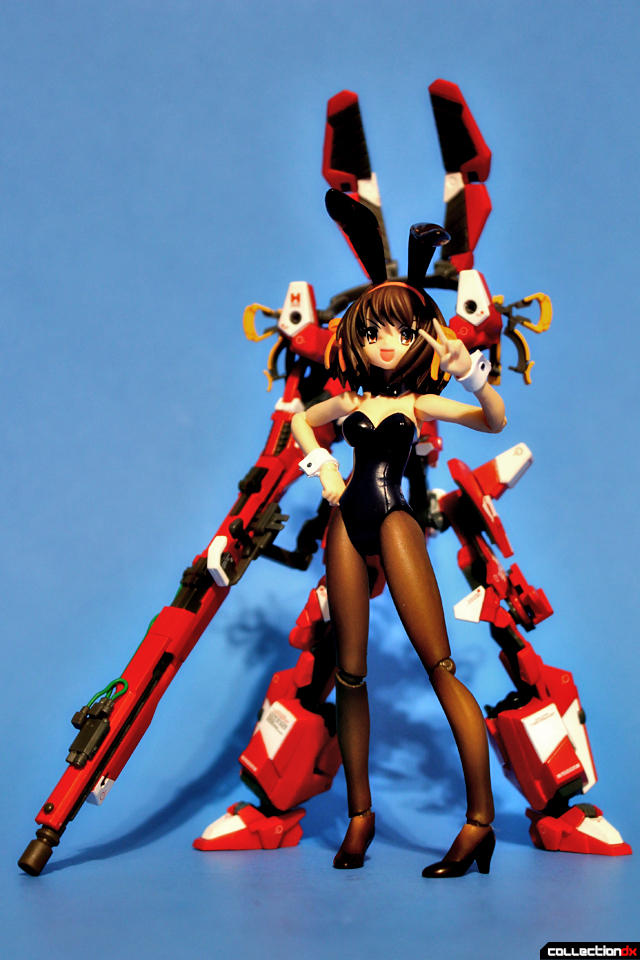 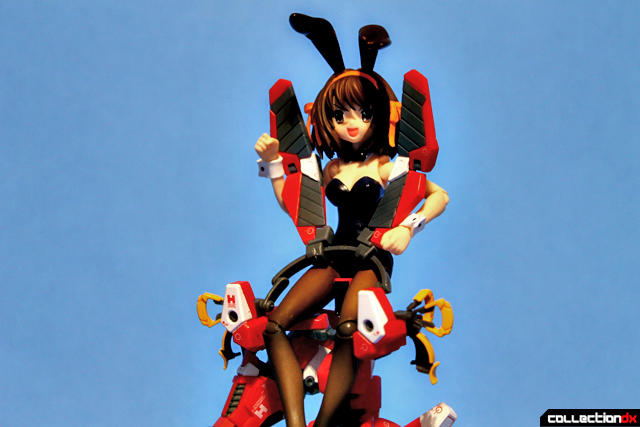 As far as I'm concerned being familiar with the property doesn't make this thing any less nonsensical.
Unfortunately for the people interested in these the other units are Tamashii Web exclusives.

FWI The mecha suit has absolutely nothing to do with anything that happens in the light novel/anime/manga. It's just Katoki doing Haruhi as a mecha girl.

Nice review toy-wise, but otherwise could have used a bit of research. There's a thing called Wikipedia, or Google, and The Melancholy of Haruhi Suzumiya isn't exactly obscure, either (even if the robot itself is).

Even if you have no interest in a figure's history, a couple of quick links cited or a brief read-up of the summary paragraph about its source series on Wikipedia, Anime News Network, or what have you will add a lot of value and interest (and hopefully prove educational). You can still plead personal ignorance while quoting a source, too.

Anyway, not trying to bag on an otherwise fine review. I'm just saying this is true when doing a review for any licensed property represented in a toy, not just Haruhi--it could be Doraemon or Daltanias or the Donald Duck Transformer or whatever the toy du jour is.

Thanks, I actually did look her up in wikipedia but since I didn't find anything on the mech I didn't bother going any further with it. This is supposed to be a two part review. One here that concentrates more on the mech and another on acdx which digs deeper into her background. Once acdx is up and running you'll see more info on her. I honestly fell asleep two sentences into her wiki. Most cdx readers would skip over that anyway and jump into the mech part. No offense to fans of Haruhi, I'm just reviewing the toy, thats just my style. I will keep what you said in mind though.

True, most CDX readers that care about the anime/light novel side probably would already know anyway (and there's always the comments section, heh). But yeah, maybe just a simple link might have been good enough, no need to go further than that. As mentioned earlier it's not like the mech is actually referenced anywhere in the wiki article (since it's not part of the original stories) anyway.

Oh, for whatever it's worth, the bunny suit was pretty much part of one of Haruhi's own ridiculous and shameless plans to attract attention to her club's objectives. It got attention at least...

Edit: out of curiousity, how tall is the Haruhi figure? I'm just wondering how this set would fit in scale wise with other similar ones.

Echoes of the S-Gundam's Beam Smartgun in that blaster... =)

Ack- no robo exo-frame bits for her arms? Not worth it.

I'd get the Mikuru one but apparently that's an exclusive as well.