The sign of Sagittarius is represented by a centaur archer. Since the Galaxian War version of the Sagittarius Cloth never really had a true owner, the figure included with this release is a blacked out body. 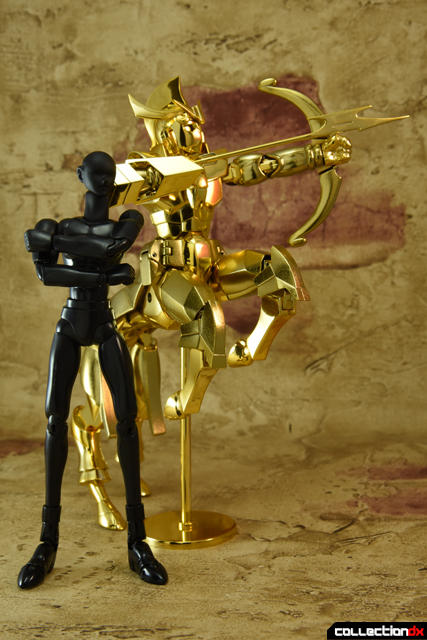 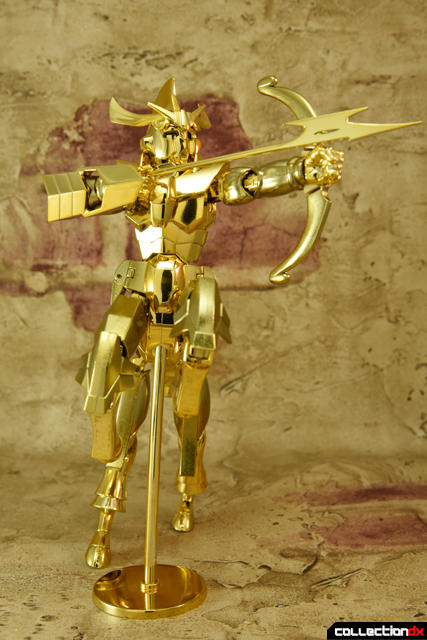 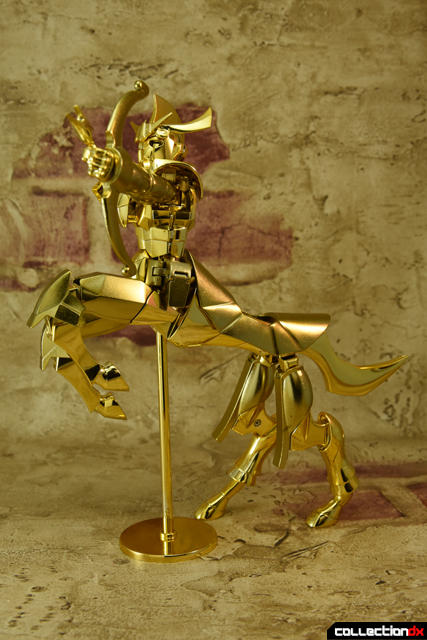 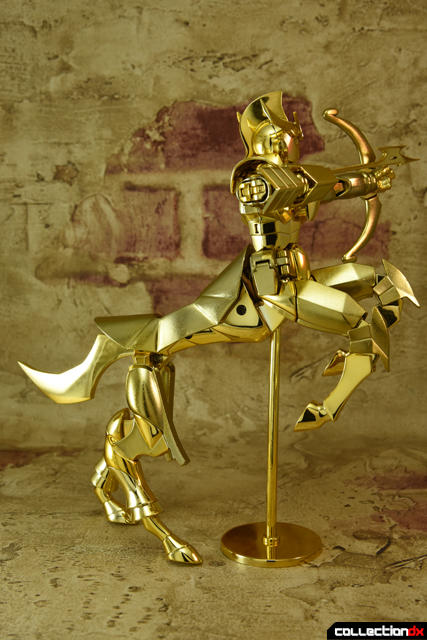 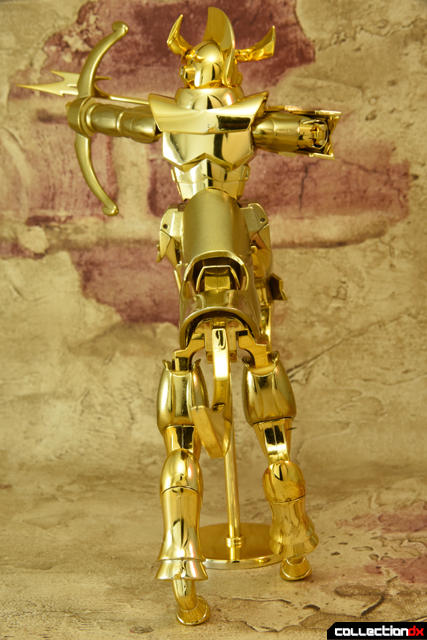 However, the Galaxian War version still does a decent job at looking like bow-wielding centaur that is representative of the Zodiac sign. 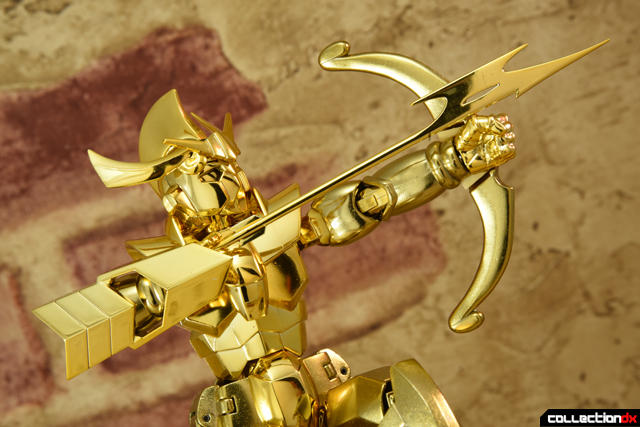 The one thing I like about Galaxian War version is that it has an actual head, unlike the Cloth’s true form that only had the headpiece in the place of the head. 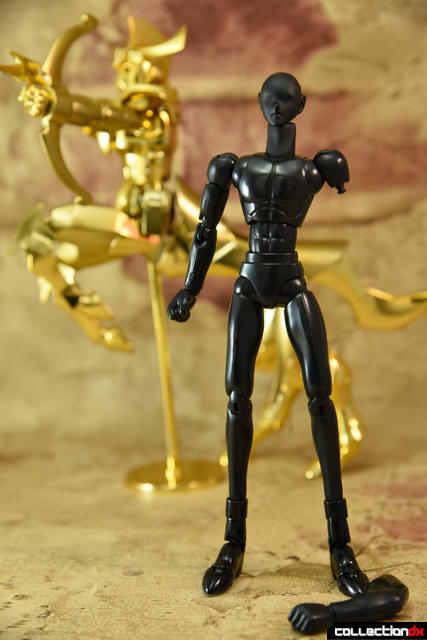 Right from the start, I had an issue with the body of this toy; the left arm came off at the bicep and would not go back in properly. I had to boil the opening so that I could pop the joint back into place. This did the job for a while.

The SCM Sagittarius Galaxian War version does a good job at capturing the quirky mass of golden bricks that is this Cloth. 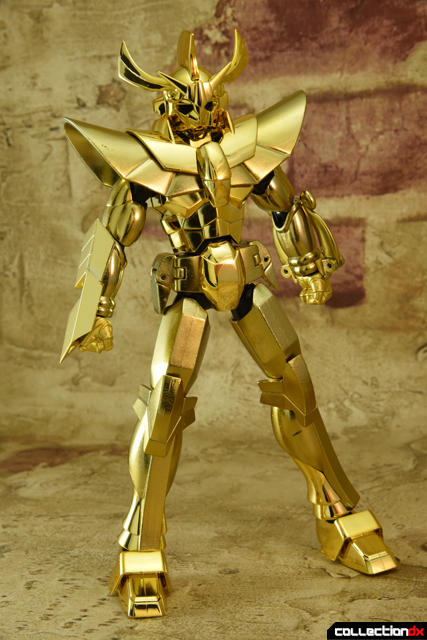 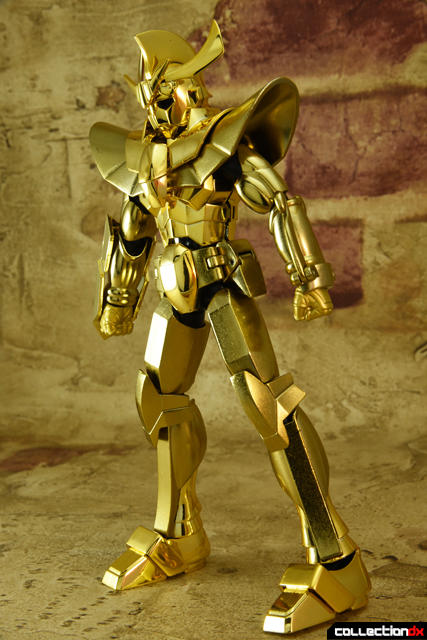 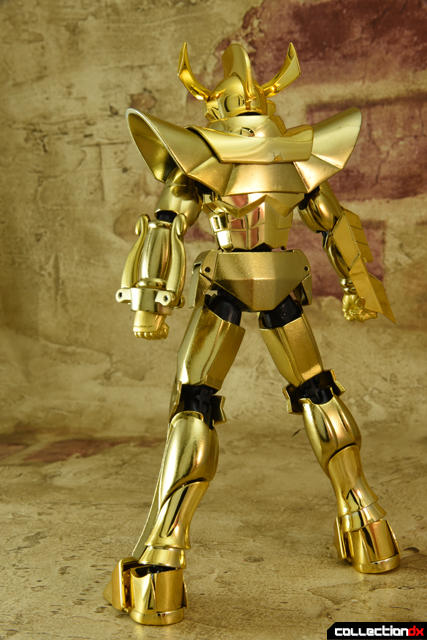 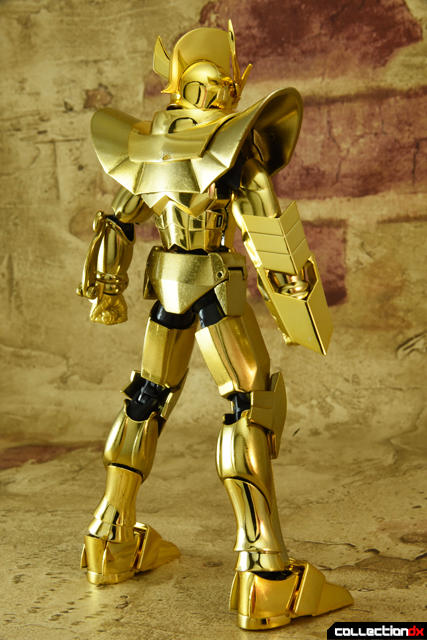 This design is a testament to just how much Kurumada’s designs improved during the course of the Saint Seiya run. The earlier Cloth designs were rough, but in a rather charming way.

The right arms sports an armguard with an arrow motif. 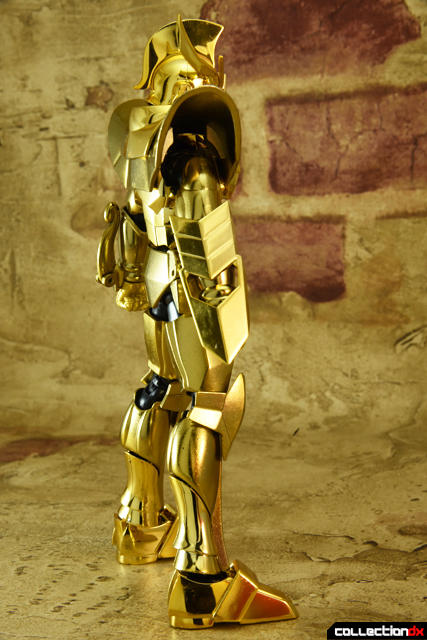 The left arm has a bow on it. 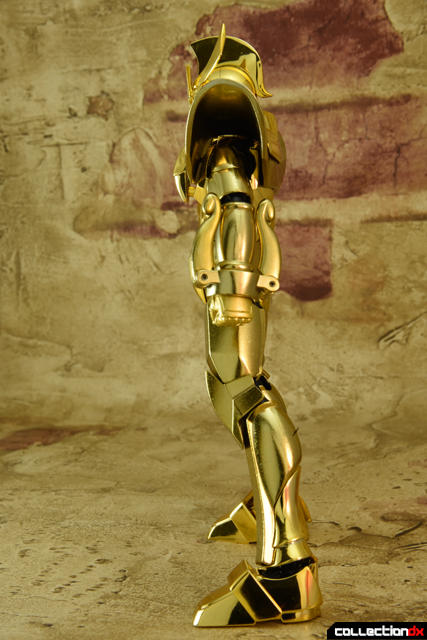 This set came with two bows for the left arm: a solid bow and a bow with the limbs on hinges. 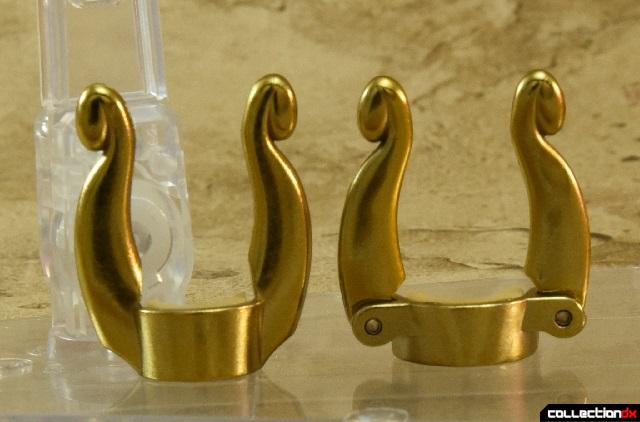 I used the later during the review, since there isn’t much of an aesthetical difference, plus its is neat having the option of extending out the bow's limbs. 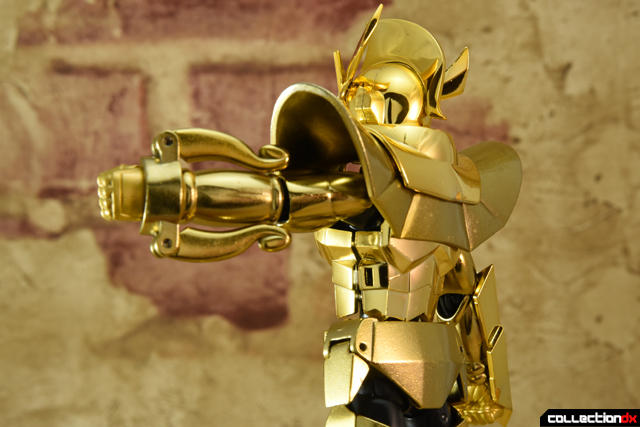 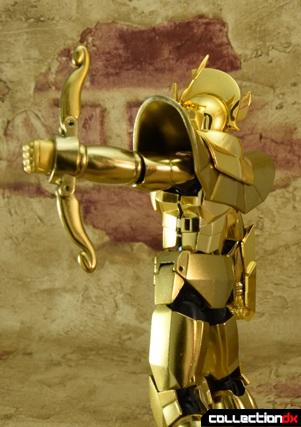 I was planning on taking a photo or two of the toy in a shooting pose. However two problems arose. First, the left arm fell off once more. Second, Bandai didn’t give me any “arrow-shooting” hands for the toy. This toy only comes with 3 pairs of fists. The only difference in the fists is their finish.

The body for this toy is a third generation Saint Cloth Myth body. As such, it has all of the same articulation one would expect from that figure.

Unfortunately, the Cloth ads a ton of bulk onto the body. The upper arms can move somewhat, but are resticted by the big shoulderpads. 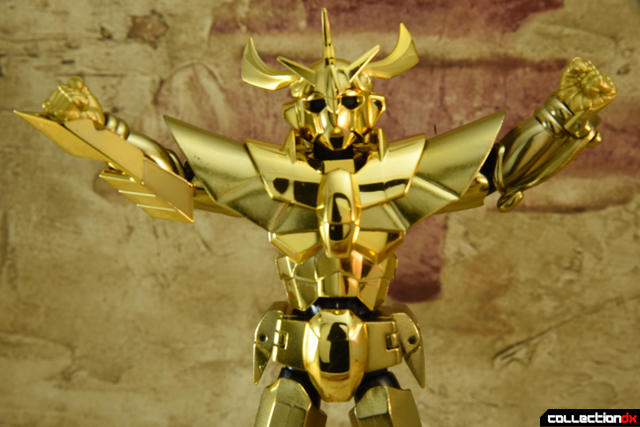 The lower body doesn't fare much better. The toy can’t even take a proper knee due to the restrictive nature of the cloth and the stupid Samurai-Troopers-style shoes that go over the feet of the toy. 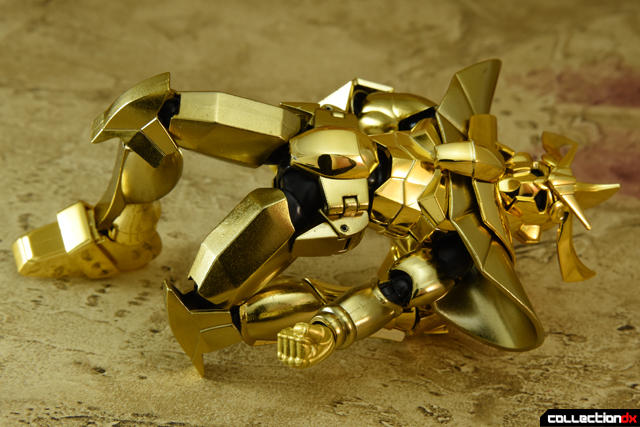 The only thing this is good for is having a limbo contest. 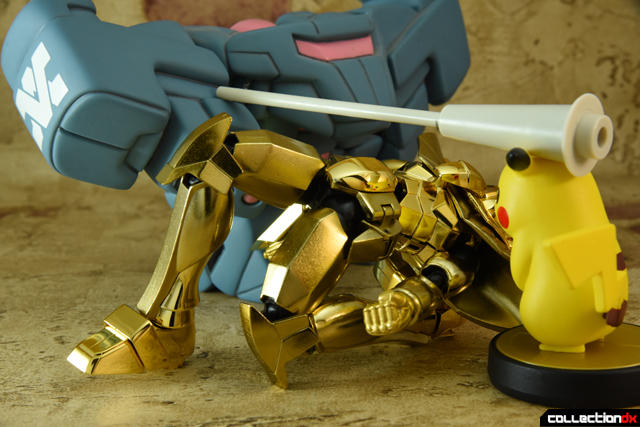 Since the articulation for the toy is very limited, there weren’t really any other shots worth taking. This really speaks to the limited appeal of this toy. It is mainly a display piece for the completists out there. 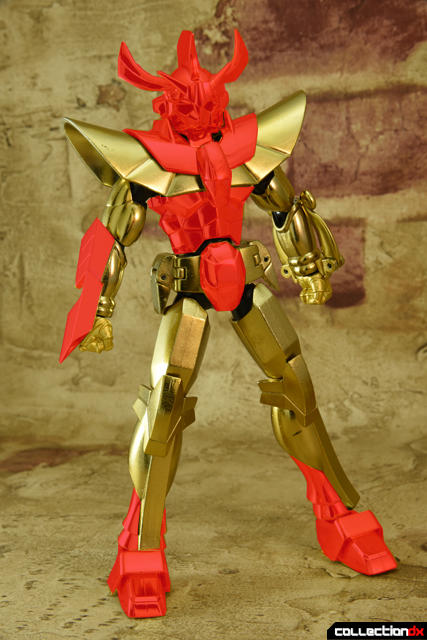 Finally, the only other extra that comes with this toy is the spare face, which is that of Phoenix Ikki. 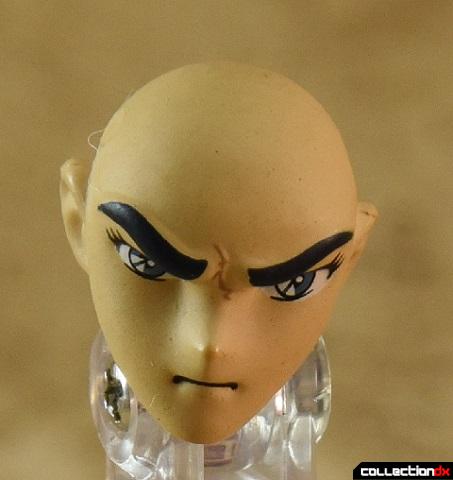 This is to represent that one second in the show where he wears the Sagittarius Cloth. 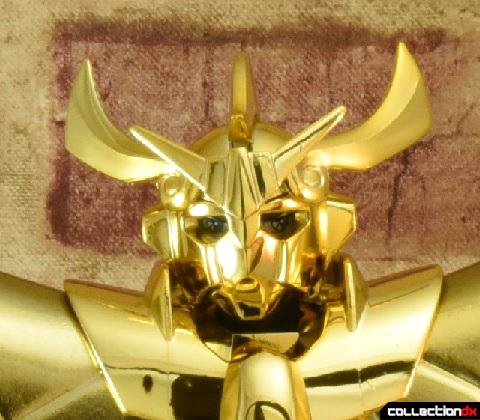 Since the face is super protected by the helmet, you can barely see the eyes of Phoenix Ikki. I had too zoom in on the picture so you can actually see the eyes.

So this release isn’t the greatest in the Saint Cloth Myth line, not by a long shot. However, I am not completely disappointed with the toy. I mainly wanted this release for the parts of the Cloth, so that Bronzes could hold onto them, as they did when they squared off against Phoenix Ikki and his Black Saints. 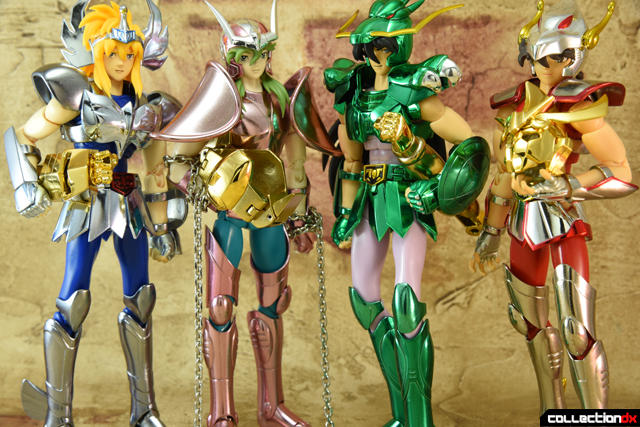 I eventually want to make of display of the Bronzes fighting their Black Saint couterparts. Now I just need to get some Black Saints that won’t cost me an arm and a leg.

Hey have some respect for Saint Seiya's brothers in armor that are totally not ripoffs.

My apologies. You are correct sir. In no way was Yoroiden Samurai Troopers a copy of Saint Seiya.

Fun fact: Kurumada had originally intended the Saints' cloths to be based off Japanese armor, rather than the Greek theme he eventually went with.