One part Batman. One part Bond.  All gentleman. Roger Smith is Paradigm City's top negotiator and he performs a much needed job in his city, a city of amnesia where forty years ago everything the denizens knew was destroyed. A life guided by strict rules and expectations, Roger is a professional through and through and expects the same from everyone else. The archetypal Scarecrow, Roger looks in every facet of life to garner his own truth by which to define himself.

With this, Maxfactory gives us the Roger Smith Figma from the Sunrise super robot anime The Big O. Dressed in an eight button, black double-breasted suit, Roger doesn't exude too much in the area of aesthetics and may seem to be a somewhat simply designed figure and character; however, this is overshadowed by his undeniable quality construction and essence of character.

Packaging:
Roger's box has an open face showing he himself inside as well as his accessories. 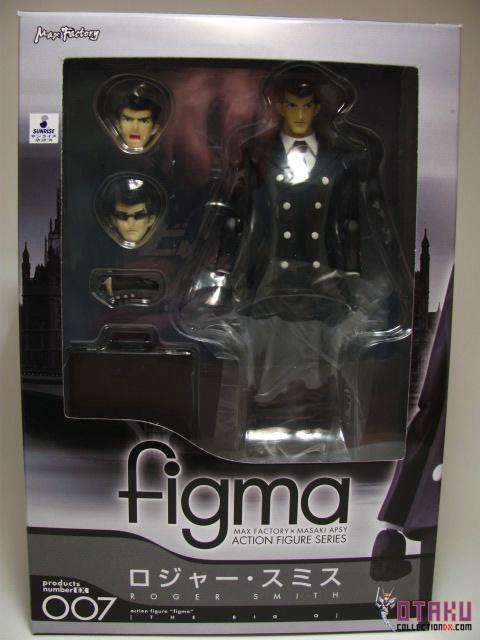 The side has a big, placid splash of Roger. 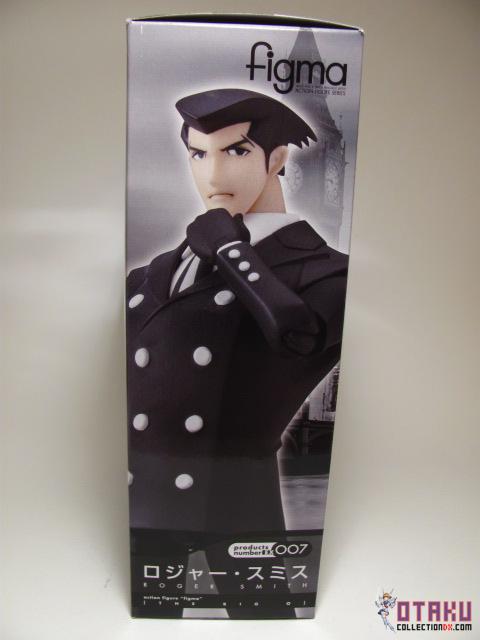 The back includes Roger being a proper BA with poses and warnings. A nice box only surpassed by what is held within. 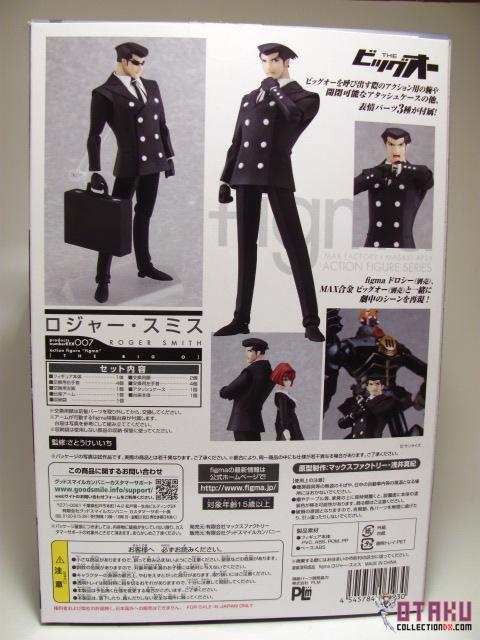 Aesthetics:
Being from a show that takes place well in the realm of realism and the 1950s, Roger Smith is pretty plain and normal; a man in a suit with AMAZING eyebrows is all about he has going for him. By that fact, however, he is very well constructed and clean. 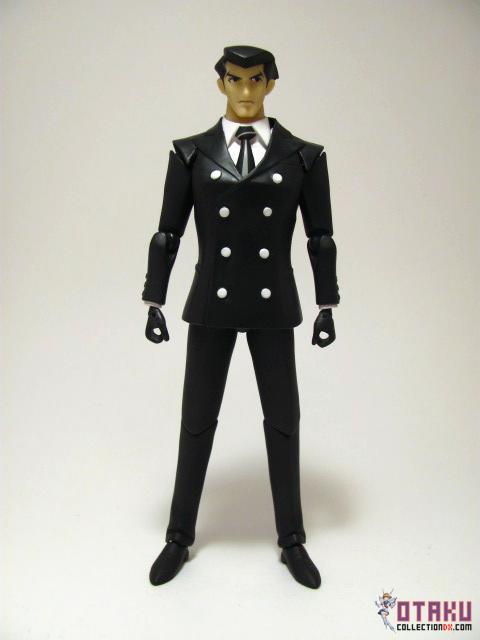 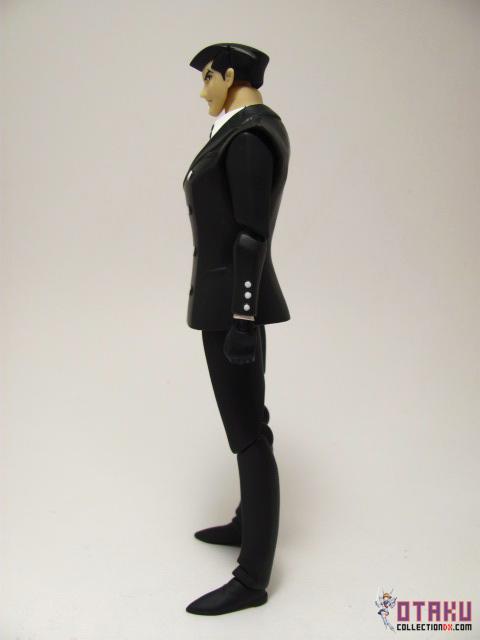 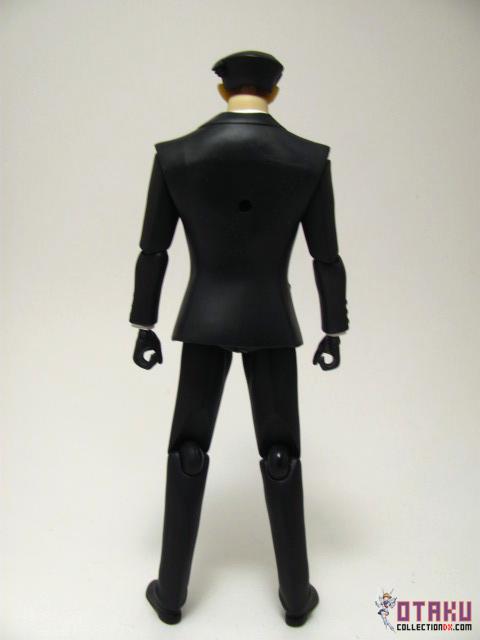 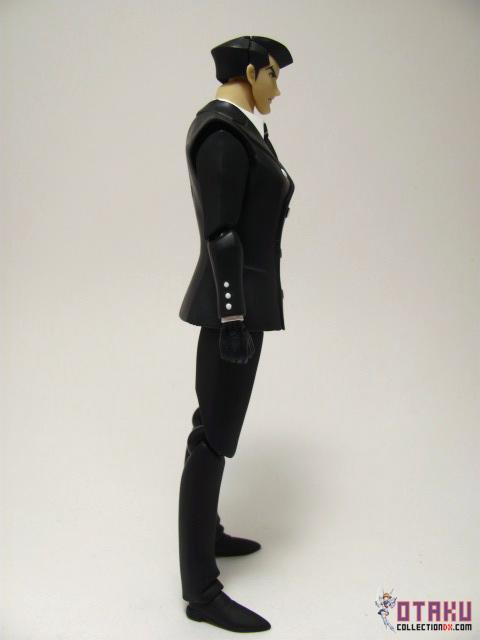 A nice matte black covers Roger's suit and the white of his buttons, shirt, and tie stripe all play well together and give a stark and brash comparison between the two. A very nice combo indeed, especially the matte black. 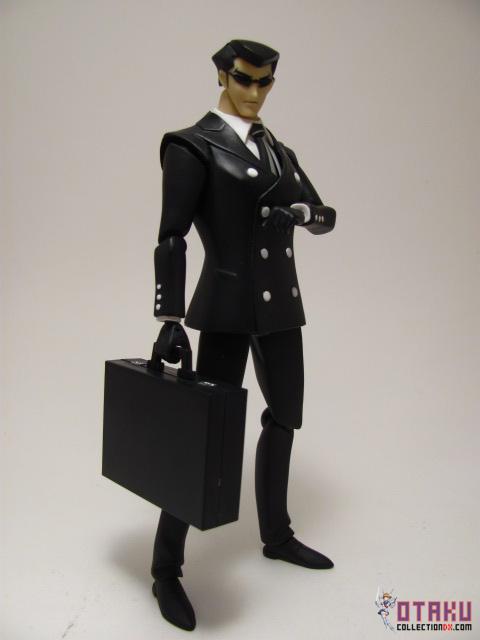 His colors and paint are clean and well applied. Being made of PVC, there is little garnered error to begin with. Skin tone is soft and even and his eyes are tampoed on. 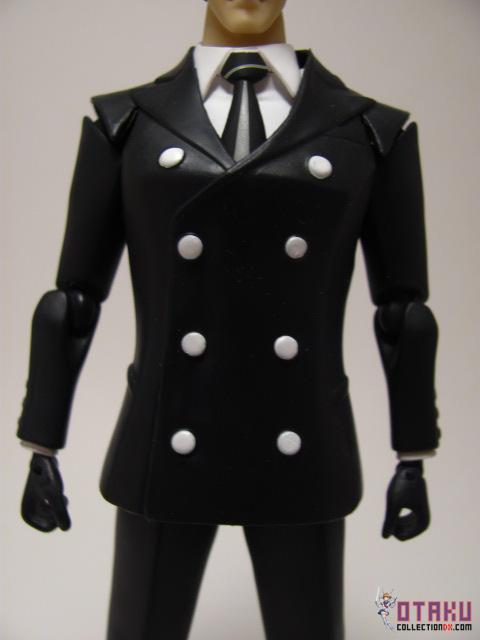 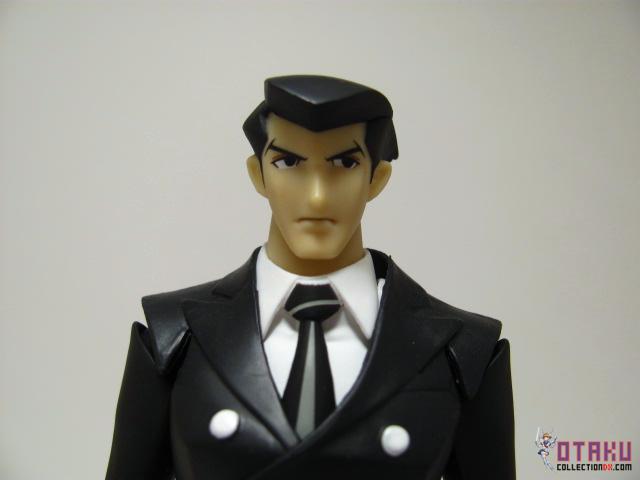 Just as the case with the R. Dorothy Wayneright figma, Roger is a 3D representation of an awesome character. That's it. There really isn't anything here other than his character that would make just anyone want him; there's nothing special or interesting about his sculpt or physical appearance.

Roger's body is constructed using the Figma Golgo 13 body. This is a little disappointing due to the fact that I am an avid fan and would have liked my main character the be made of more original parts. However, the final result is flawless and looks great. Being in a suit, Roger and Golgo share the same body type anyway. Still makes for a great figure as the sculpt is direct and accurate.

Articulation:
Being of the figma line, Roger is well equipped with joints and poseability. Want him to lean like a gentleman? Do it. Punch and kick like a tokusatsu hero? Do it! His joints all offer a wide range of motion to whet your posing appetite. Below I stayed with more subtle poses, as Roger is not a flamboyant exhibitionist. 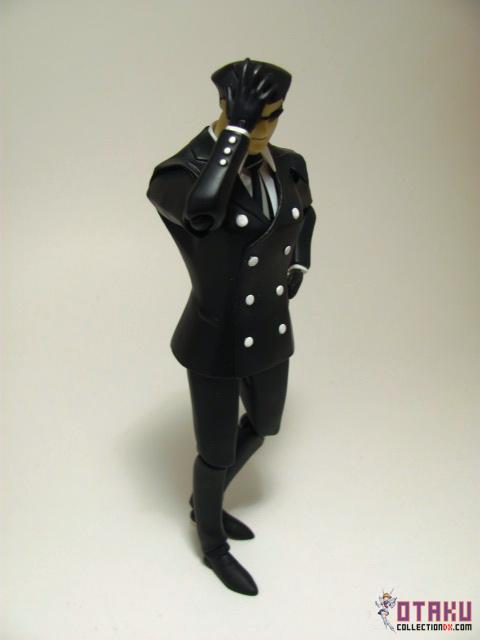 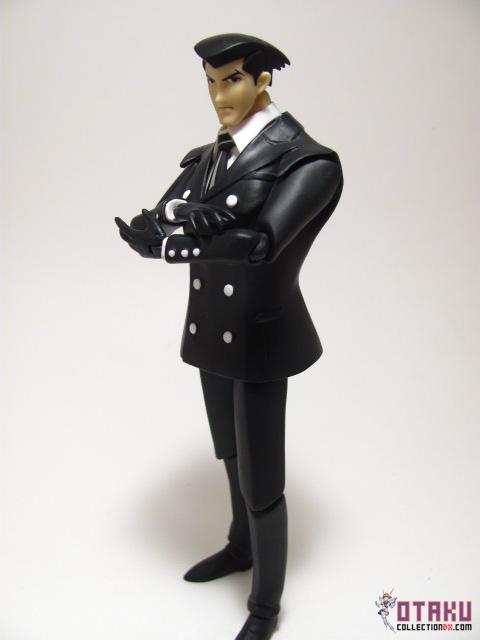 His joints are what you have come to expect from the Figma line: tight, sustainable, and quality. The joints being matte and Roger being as thick as he is really help the joints to be hidden very well. The only ones that are more obvious than not are his elbows, and only slightly. 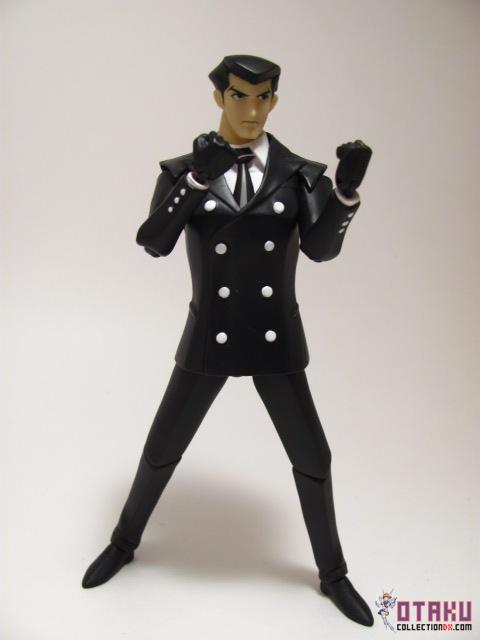 Roger sports ankle tilts, a waist joint, swivels on every joint, figma jointed elbows, knees, neck; and sockets on his legs and shoulders. Roger's top coat is made of rubber so that his shoulders are not encumbered or limited from obtaining a pose. This is a nice addition save for one thing: it does not keep form. If Roger is kept in a pose that moves the top coat out of neutral position for too long, it will stay in that position. Putting him back in neutral position though will make the coat reform over time (usually overnight). 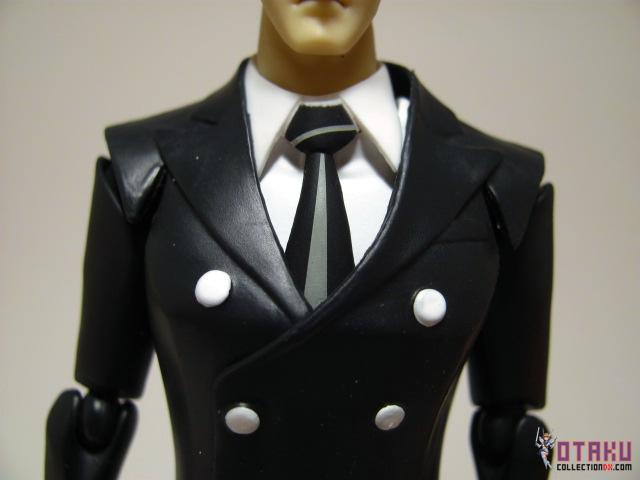 Roger stands at about six inches tall, taller than most Kamen Rider SHfiguarts and certainly Dorothy herself. 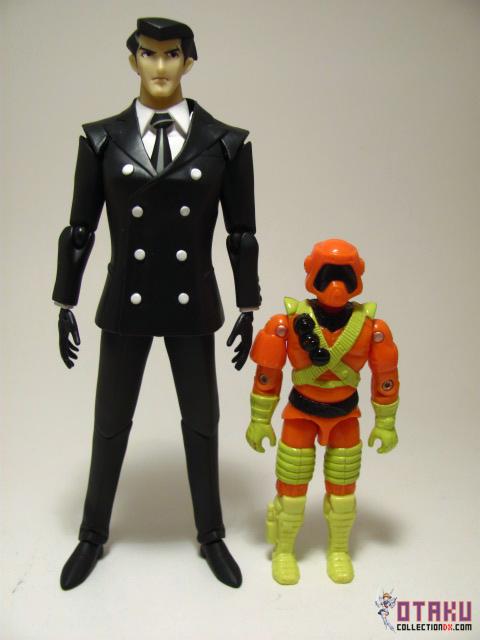 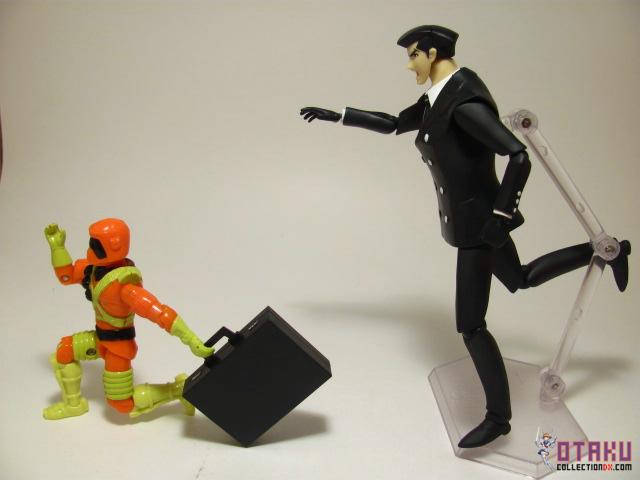 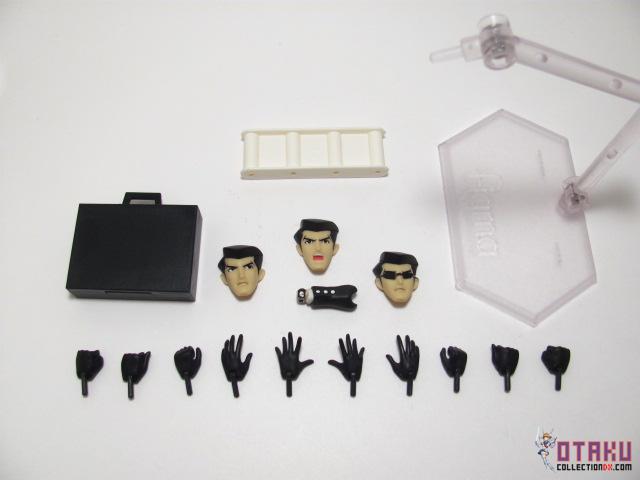 The briefcase can be opened to reveal the ransom money for Dorothy in the first episode. 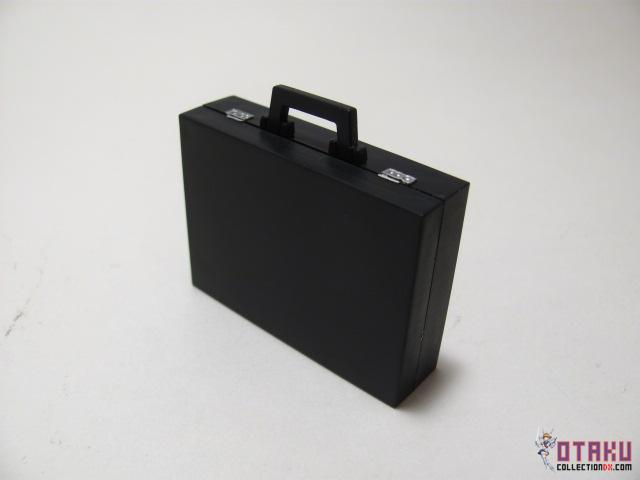 OBSESSED FAN CRITIQUE: The money in this case is actually upside down from the actual scene in the episode. :B 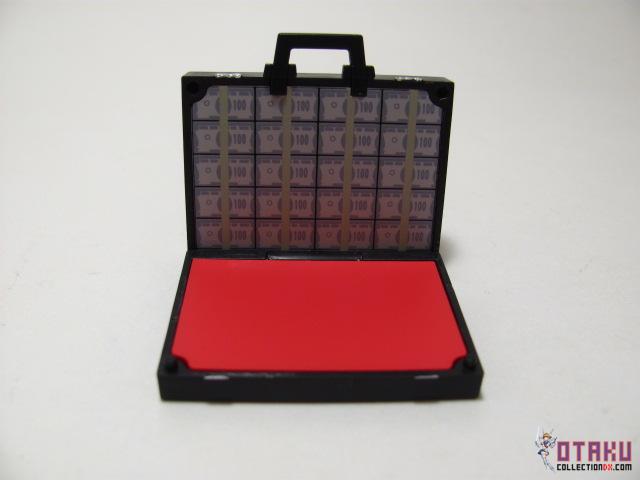 The extra forearm can be attached where the stock one was simply by pulling the other one off. The fit is very snug, so be very careful when exchanging the two. 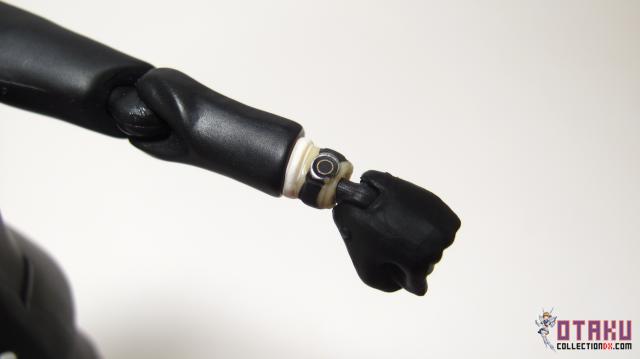 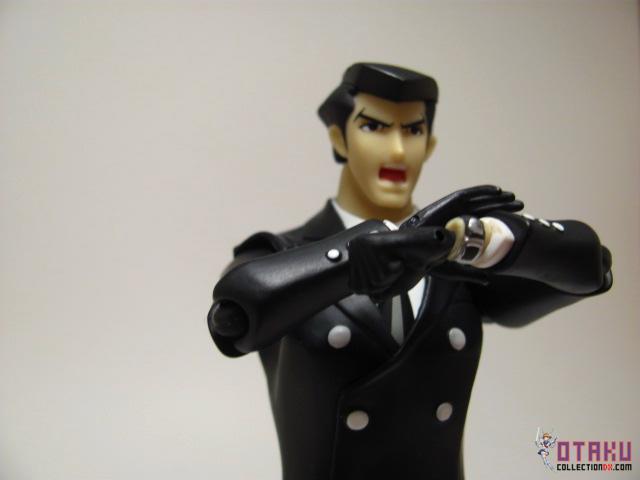 Also, the briefcase and sunglasses-endowed face show that this is specifically Roger Smith from episode 1.

Gimmicks:
The main gimmick of the figma line is the ability to swap faces to render different emotions. Roger comes with three faces to work this gimmick. 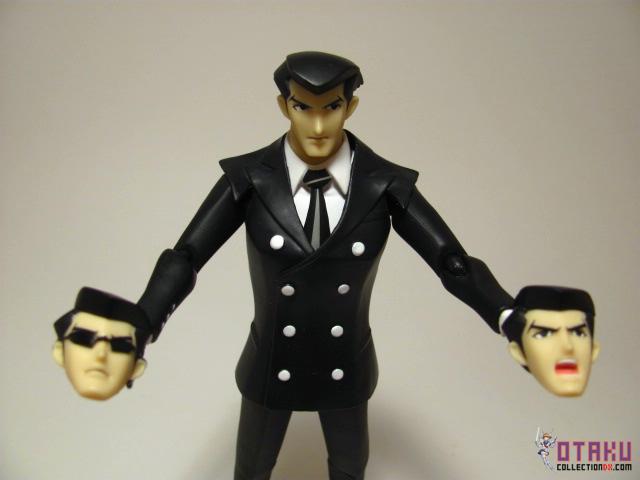 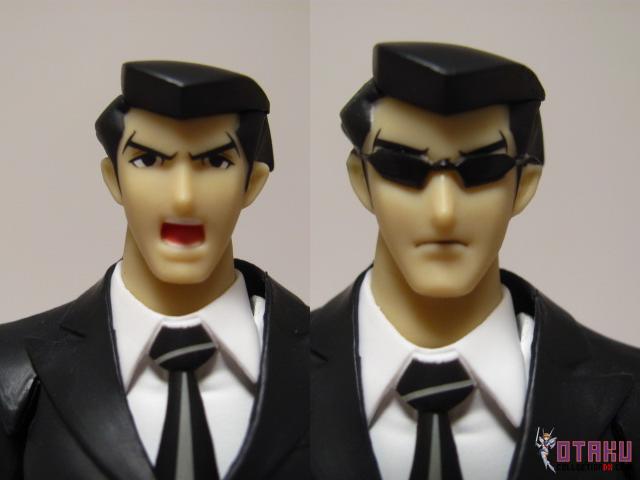 A good selection of faces are present, but I would have personally liked to have had a smug, grinning face for Roger, as that is part of his character.

Roger's package also came with a backdrop with a perforated square detailing his character. This can be punched out and connected to a di:stage so it can be custom tailored to him. 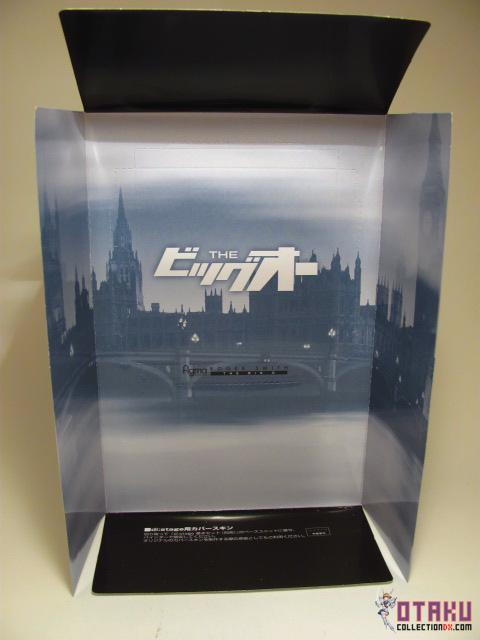 Closing Remarks:
Roger Smith is a drab, plain figma of undeniably great quality. Though being plain, Roger represents his animation model very well and sports great articulation, sculpt, paint, and gimmicks. Just as with R. Dorothy, Roger being so normal gives very little to make anyone who is not familiar with his character want him, especially since he's a con-exclusive figure. I got him because he's a character from my most favorite anime, The Big O. If Big O  is anything less than that to you, then this figure is not for you. 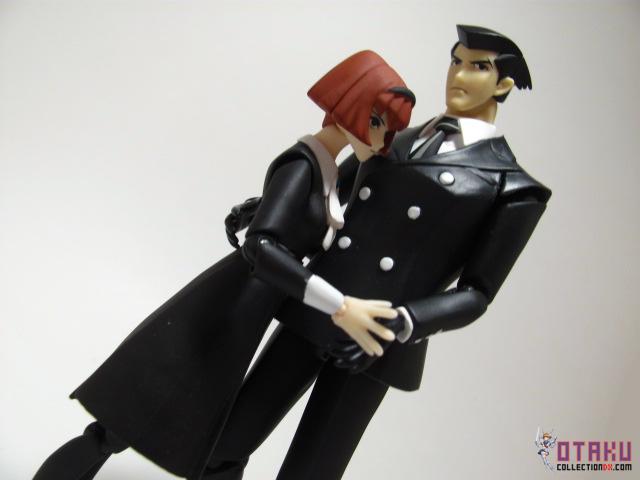