Transfomers the Movie is forever burned into my mind. All the sights and sounds from the triumphant chords of THE TOUCH to the badass riffs of THE HUNGER are imbued into every fiber of my being. For me, Hot Rod was the coolest Transformer ever and Rodimus Prime the ultimate hero.

I was excited to hear that Rodimus Prime would be the next Masterpiece Transformer. Along the way there was much speculation as to the exact mechanics of the toy. The world was shocked to see that this toy would not only be Rodimus, but also Hot Rod. It encompasses everything about the character into one package. Does it succeed in bringing all the elements together? Let us delve into Masterpiece Rodimus and find out. 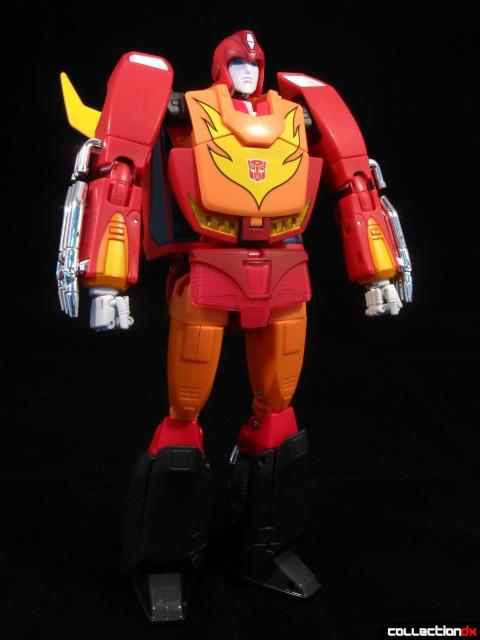 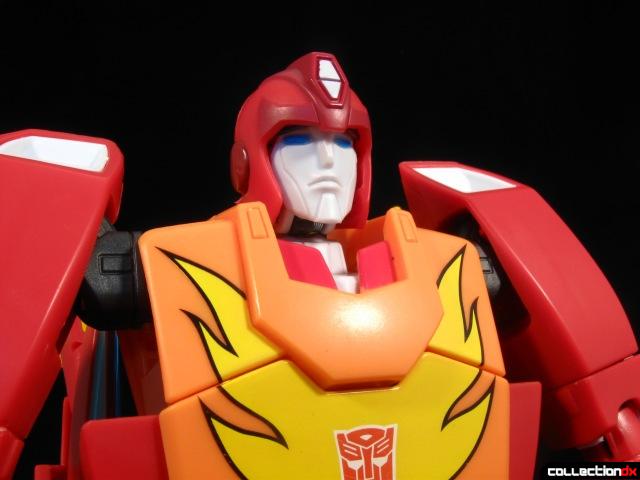 The toy comes in a gigantic box that houses the main toy in robot mode and the trailer. By default, the figure is in Hot Rod mode with the younger face and retracted legs. Hot Rod is fairly tall with solid look. The colors are absolutely perfect and the design is quite faithful to the animation model. The toy is mostly plastic with diecast feet. 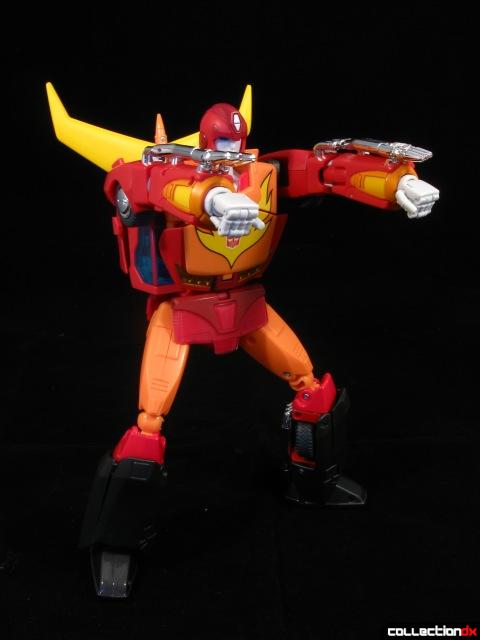 Hot Rod's articulation is fairly complete. The toy features ratcheted shoulders, hips, knees, and knee which provides it with a good amount of stability while posing. 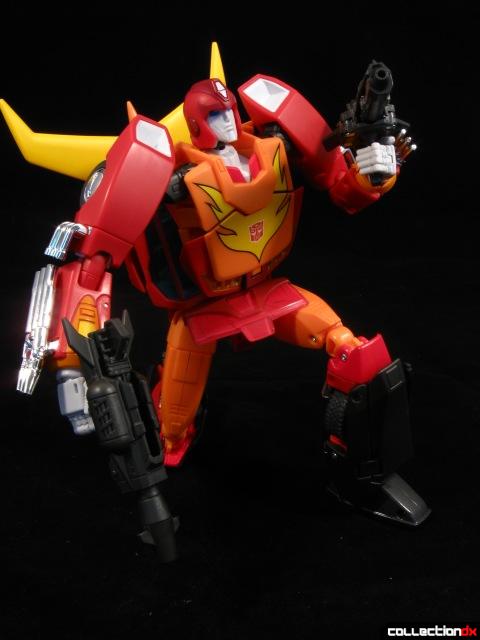 Hot Rod comes with twin pistols known as Photon Laser Alpha and Beta. These peg into the palms somewhat loosely. 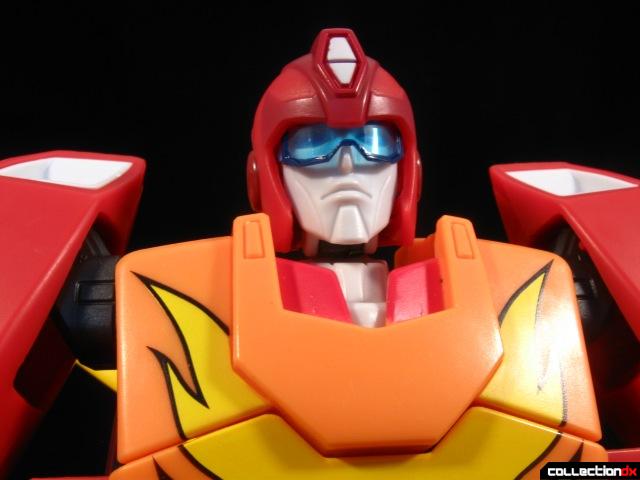 By moving the round detailing on Hot Rod's helmet you can deploy a pair goggles as seen in the movie. It's kind of difficult to get the goggles to slide down all the way. 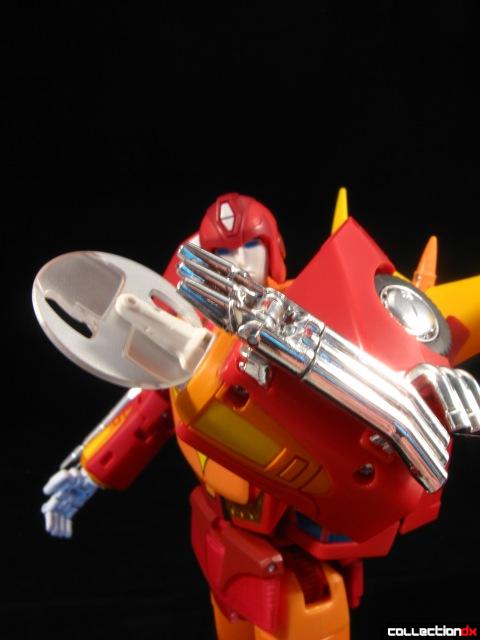 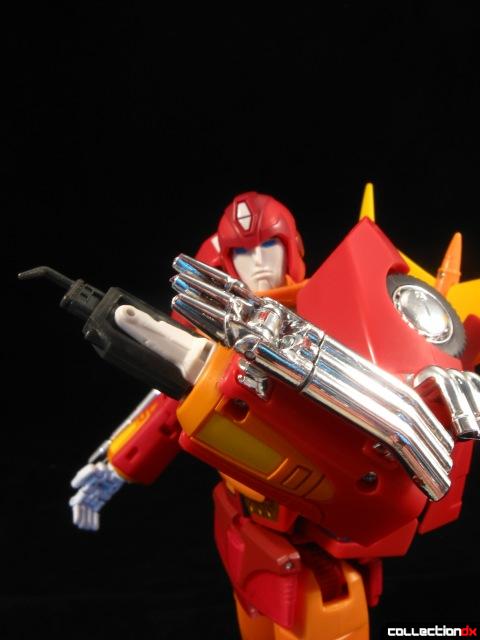 Each hand can be swapped around into order to attach an accessory. You get a saw blade and a welding torch. 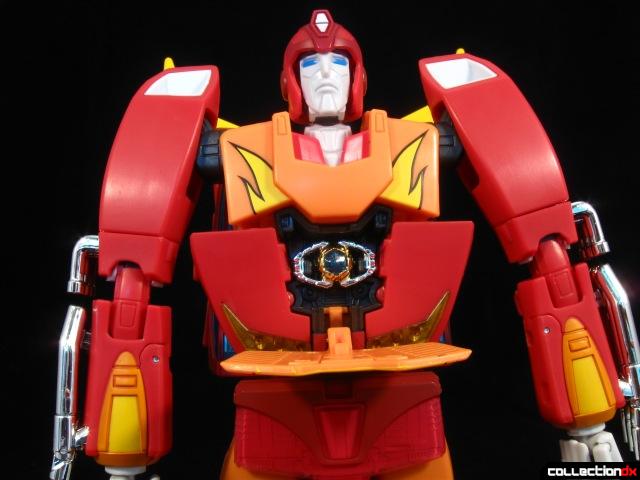 Withing the chest cavity is a small removable Matrix of Leadership. It is in fact too small for the figure to hold two-handed so the instructions suggest using the Matrix from the Masterpiece Optimus Prime toy.

Converting Hot Rod to Rodimus Prime is easy. Simply pop up the helmet to swap faces, extend the legs, and raise the spoiler on the back. 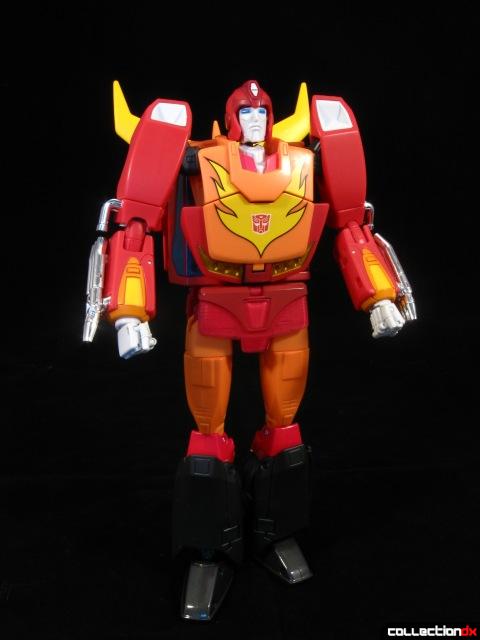 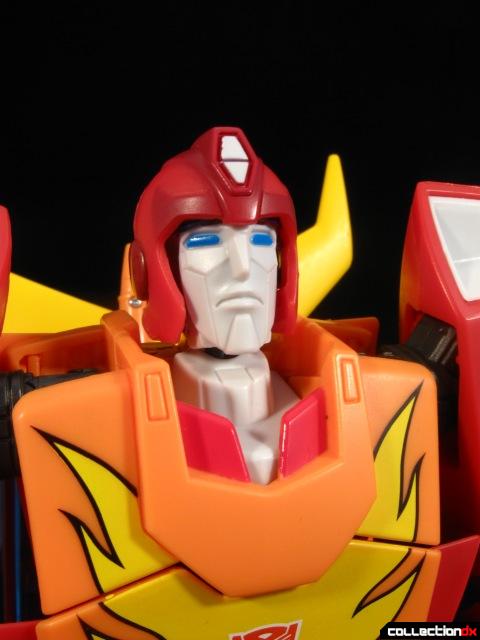 The resulting transformation is very subtle. The biggest change is the more chiseled face of Rodimus Prime. 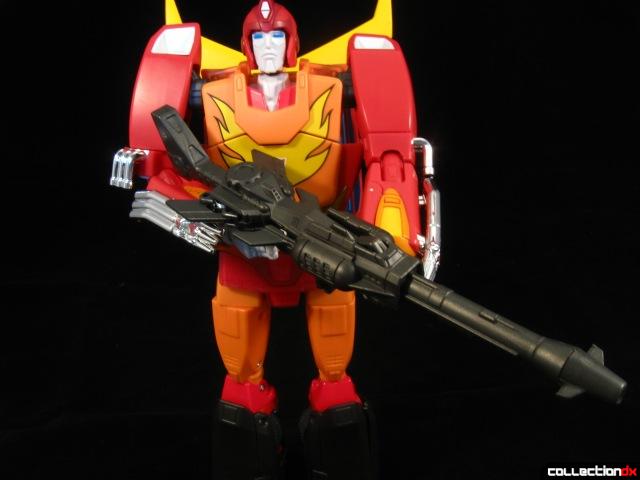 In this mode you can combine the two Photon Lasers into the larger Photon Eliminator. The two weapons simply slide together and click in place. 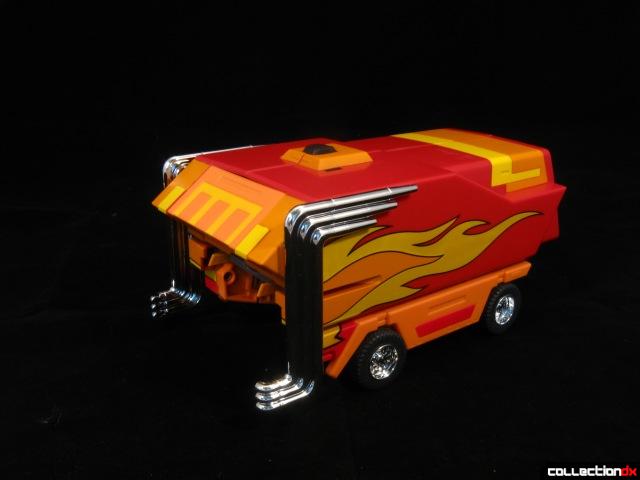 The Rodimus Prime trailer is just as large as the figure itself. It is a very solid box of plastic. 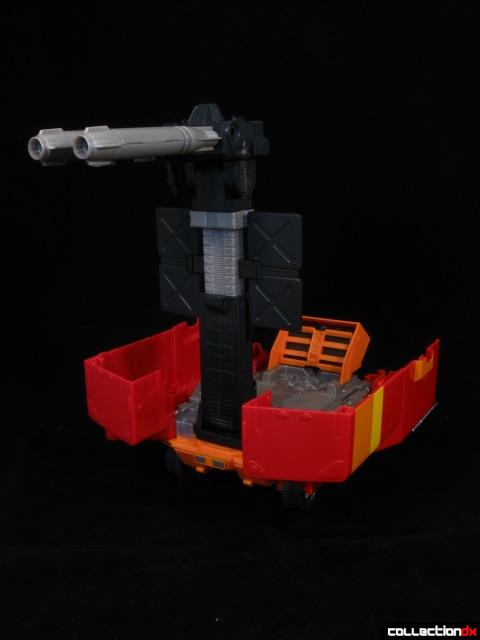 Opening the trailer allows it to transform into the Mobile Defense Station. 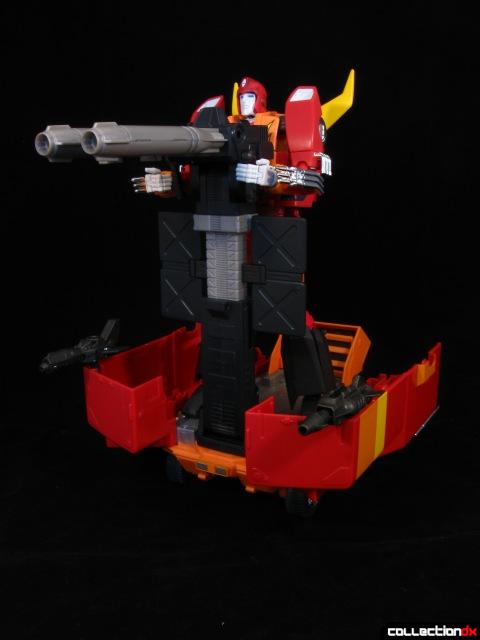 The Mobile Defense Station is an enormous accessory. Rodimus has no problem manning the turret. The base also features various locations where you can place the Photon Lasers. 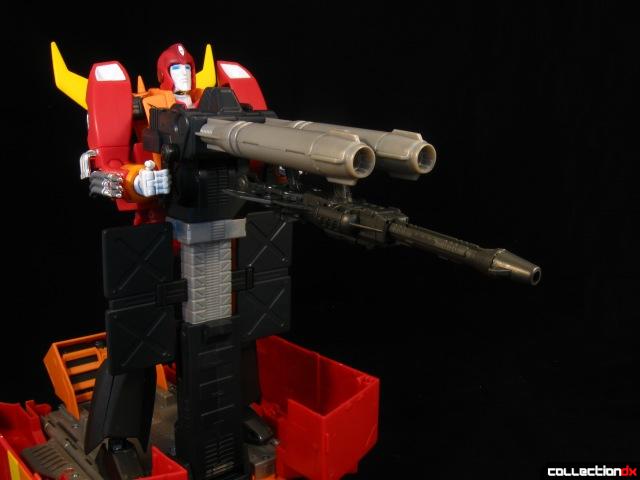 The Photo Eliminator can be mounted under the twin-barreled turret. 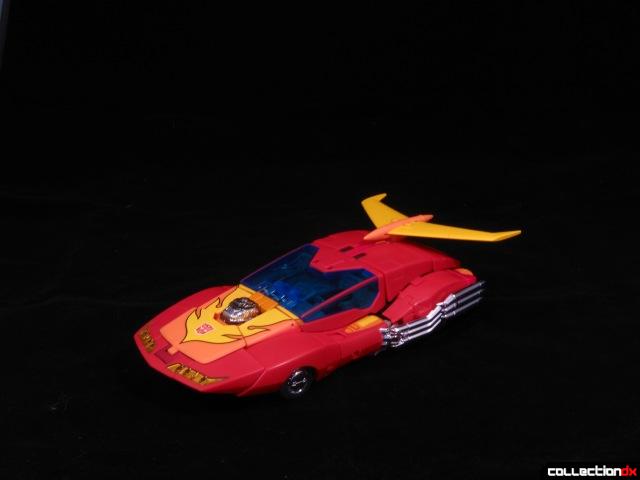 The transformation into the Hot Rod vehicle mode is fairly straightforward with each part having a clear destination. Unfortunately, not everything locks in place in a few areas to there is some fiddling required. The resulting car mode is very compact and sleek. 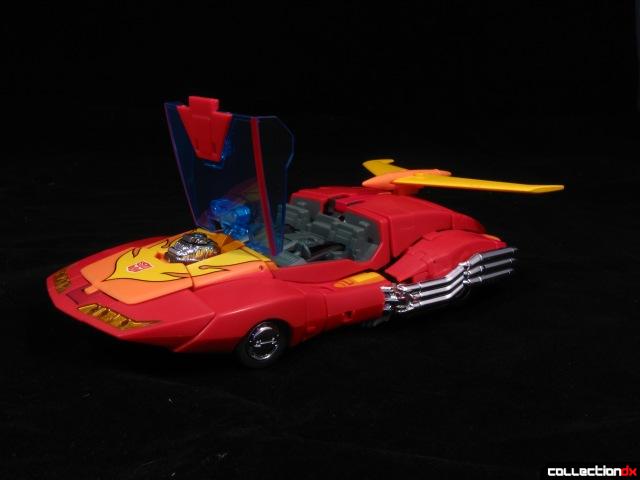 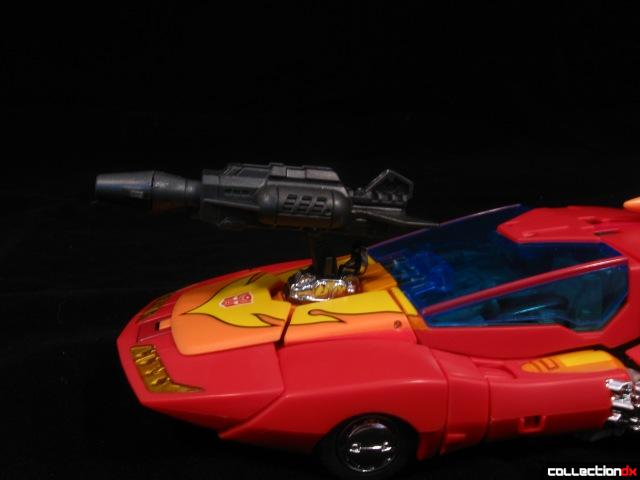 As an homage to the Generation 1 toy, you can mount one of the Photon Lasers on the engine. 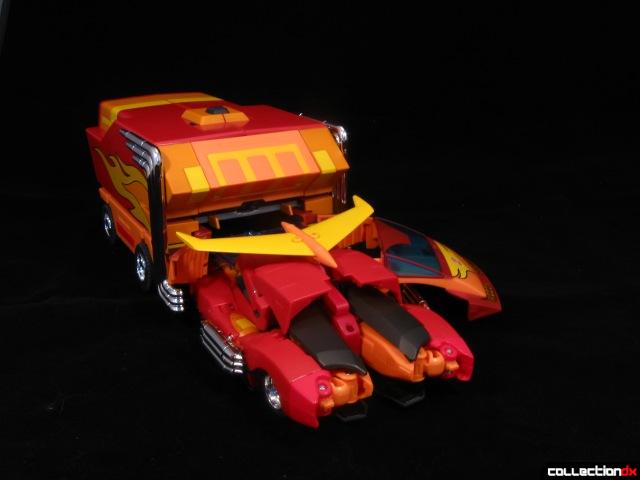 Transforming the Hot Rod vehicle into a kind of half car prepares it for docking with the trailer. 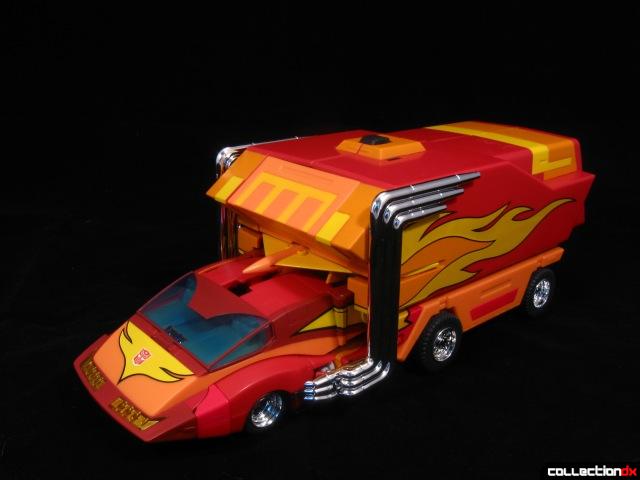 The resulting Rodimus Prime vehicle mode is absolutely beautiful. I would own this car in real life if I could. It is gorgeous.

A number of collectors have reported a variety of quality control issues with this mold, varying from exposed springs in feet to paint scratching in the trailer and even panels falling off during transformation and sometimes broken in-box.

Have you noticed any issues with yours???

Supposedly, a new run later on in the year is going to correct some of the loose panel and paint issues.

I had one and sold next day...my biggest complaint almost no die cast...very plastic...and figure was very small in relation to Convoy. I have to say other than the five billion Convoy...all the masterpiece transformers have almost no die cast...from grimlock to megatron really frustrating to me...

Not bad, but I could never understand how baggy eyes and longer legs qualified as a powered up mode.

It's to make him look older and more mature.

The US version is just... Leaving out the trailer is inexcusable. Given that the Masterpiece range is aimed at big-spender adult collectors, the price shouldn't have been that scary.. And even if it was that big an issue, there's absolutely NO reason for them not to have included a cardboard press-out substitute..