A real heavy metal girl -- if you'll excuse the pun -- R. Dorothy Wayneright is the android replica of the late Dorothy Wayneright who was lost in the "event" forty years ago, the event that signaled the end of the world. Cold, seemingly uncaring, and a terrible piano player (at least by Roger Smith's ears), this world's Tin Man lives life at the Smith Mansion, perpetually looking for the one thing that has always alluded her: the ability to love.

With this, Maxfactory gives us the R. Dorothy Wayneright Figma from the Sunrise super robot anime The Big O. Though perhaps being a somewhat boring and simply designed character and toy, this figma is a perfect addition to any Big O collection and does everything that R. Dorothy and a figma in general needs to do.

Her package has an open front showing off the figma itself and all the accessories therein... especially little Pero! :3 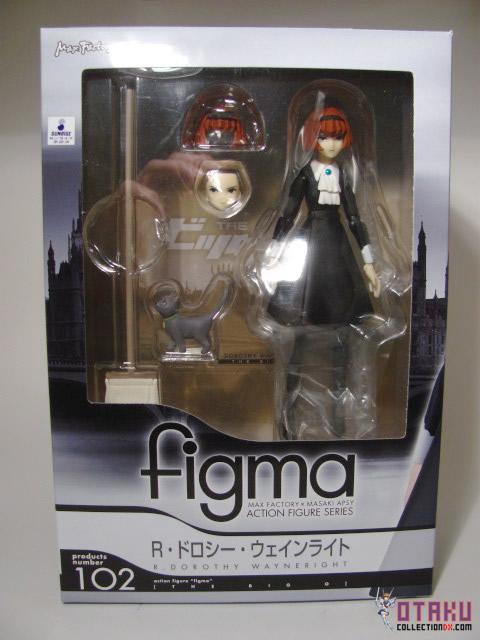 The side has a nice splash of R. Dorothy taking up the whole side. 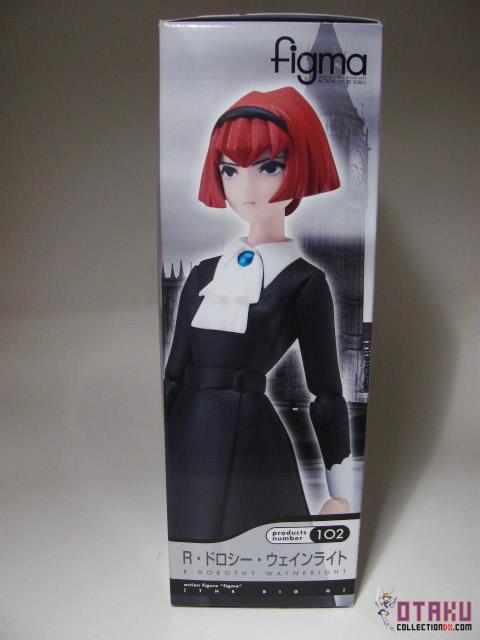 And then the back. Your average assortment of poses and warnings. Overall, though, very nice packaging. A good, placid vibe emanates from it, with the whole emotionless robot and drab city theme going on. 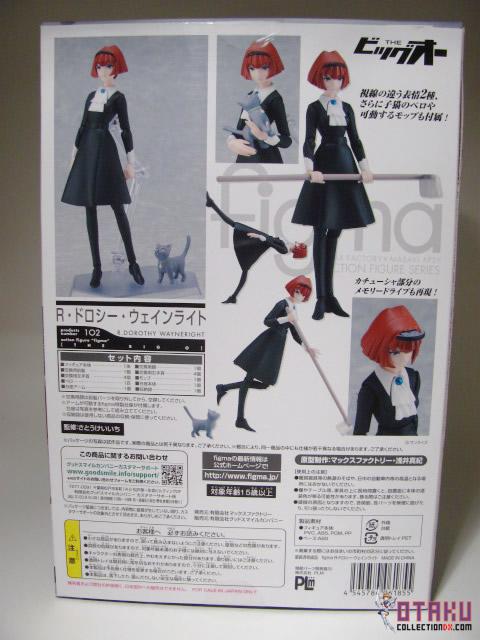 First and foremost: R. Dorothy Wayneright is very plain. Let's get that out of the way. She is, however, very well detailed in her plainness; she is faithfully reproduced from her animation model to this figma. 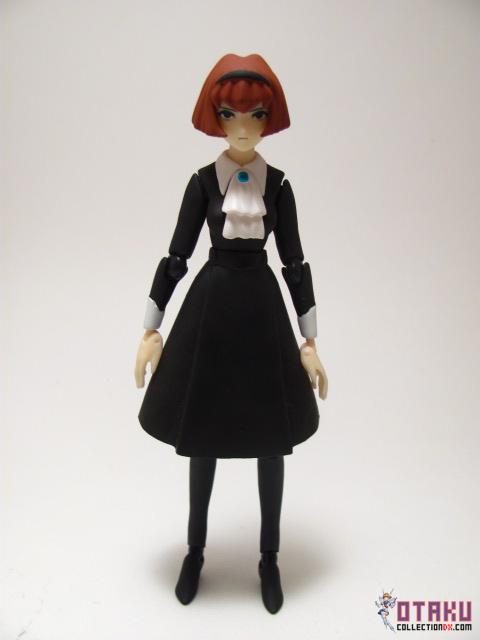 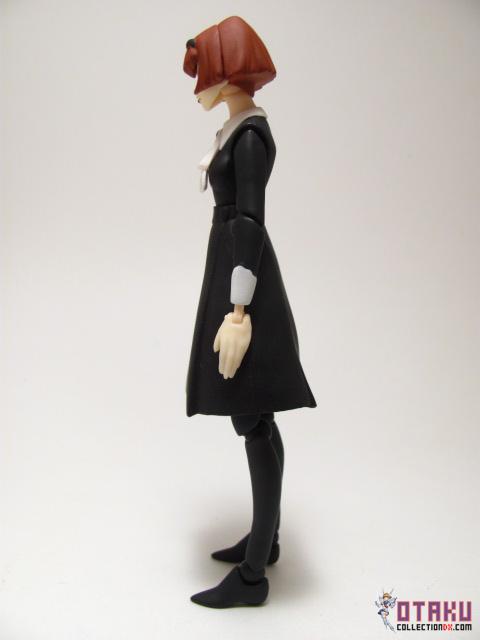 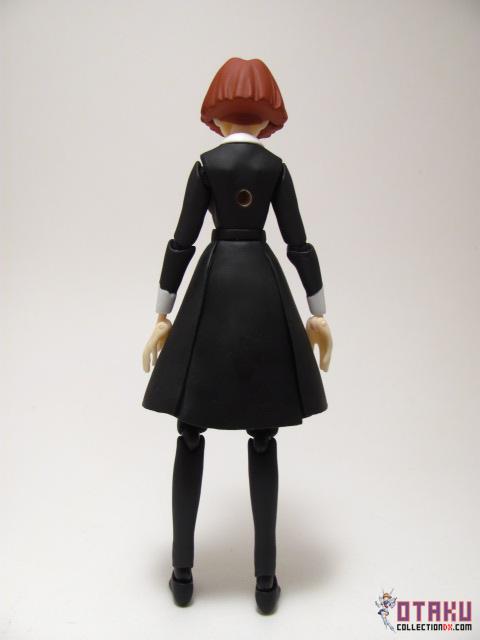 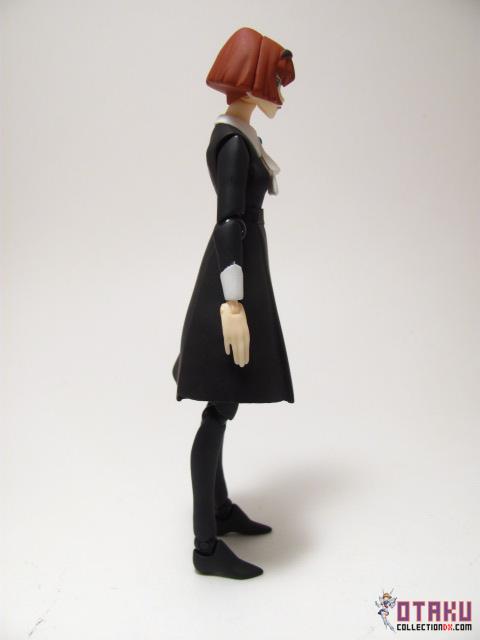 She is given a very nice matte finish on both her dress and body parts, and you know how I feel about matte... or do you? Well, you do now. Her collar and cuffs are a nice white set against the black of her dress; the brooch is present with a nice sheen; her belt is a raised detail; her bib is given a nice sculpted and waved detail. 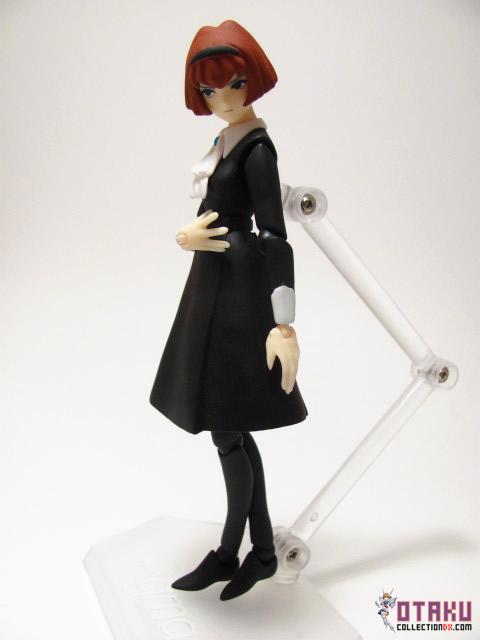 Her paints apps are clean and concise as most everything is colored PVC, and her eyes are a simple and well applied tampo. She's much too skin toned, however; she's much more milky in the anime, but that's a small thing to knock at. 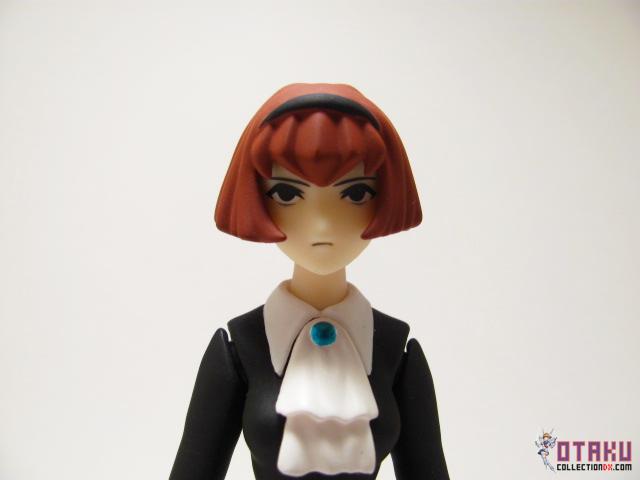 What this figure has going for it is the fact that it's a 3D representation of an awesome character; however, without that aspect, there's really nothing exorbitant about her in design that would make someone that has not seen the show want to get it. She's not necessarily bland, but certainly not explosively interesting. But, everything is in the eye of the beholder, so...

As a figma, R. Dorothy is jam packed with joints and poseablility. She can operate and very wide range of poses from subtle and character appropriate to the insane and streetfighter-esque... ones I chose not to do for the sake of the integrity of the character :B 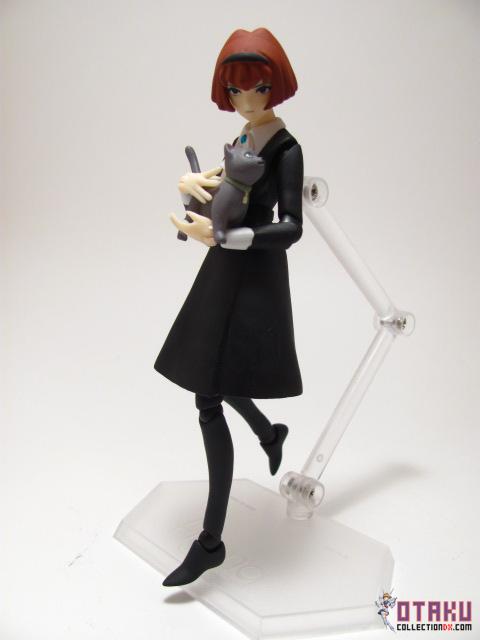 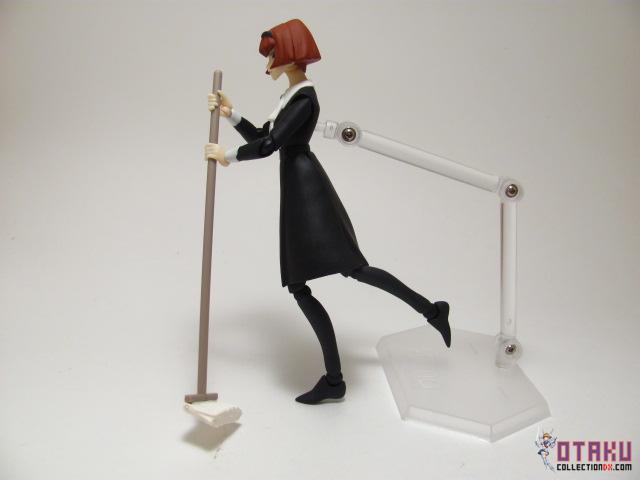 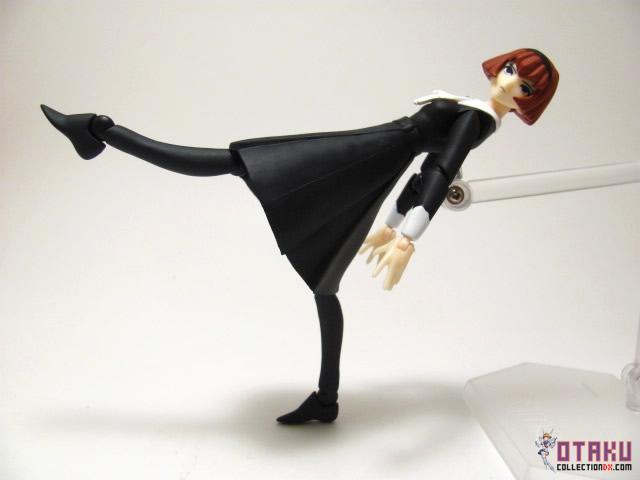 I must say, I copped out on poses for this review due to the fact that there are so few that fit Dorothy well and that are exciting. Whoops. 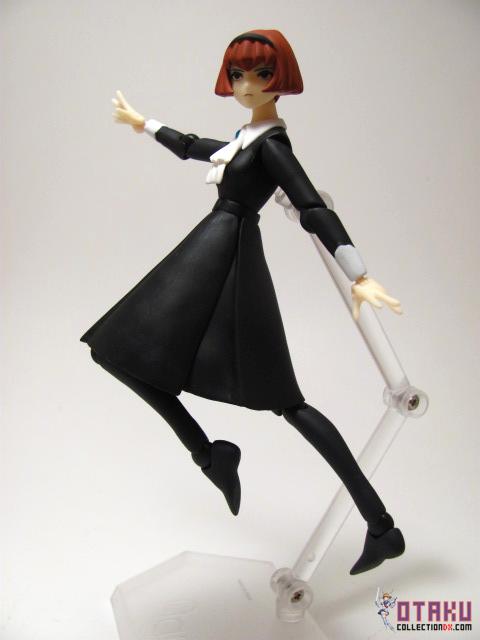 Her joints are tight, but not in a frightening way. They are taut and, being figma joints, will stay that way, so little worry should ever on them loosening or breaking. She being as skinny as she is, her joints aren't hidden too awfully well, but them being the same color black really helps pull the figure together. 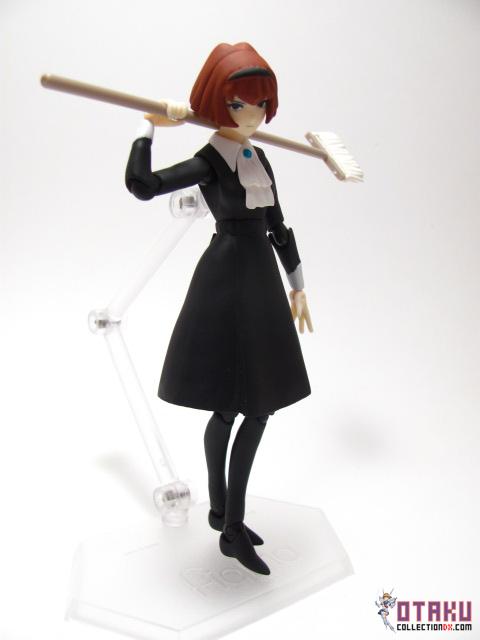 She sports swivels on every joint, ankle tilts, waist joint, figma jointed elbows, knees, neck; and sockets on her shoulders and upper legs. Her dress also made of rubber and is split and overlapped on the sides. This helps it not to constrict any leg movement and is a very nice touch. 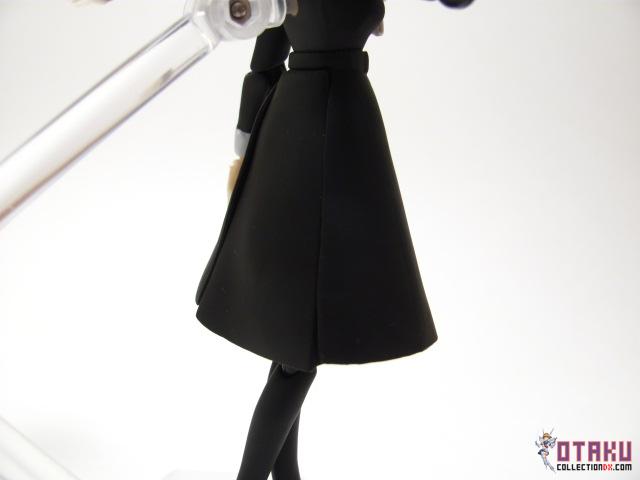 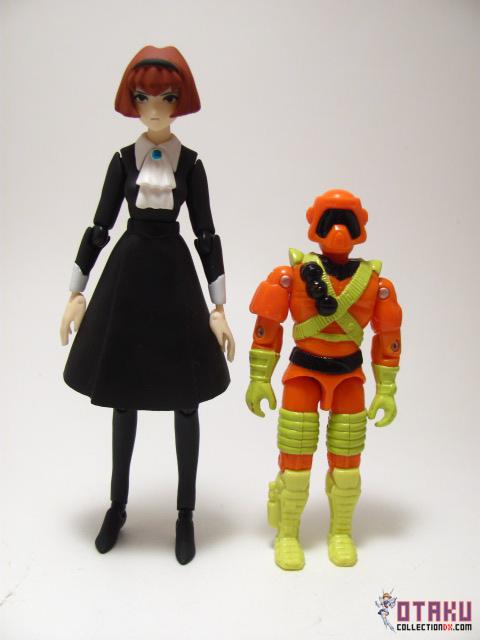 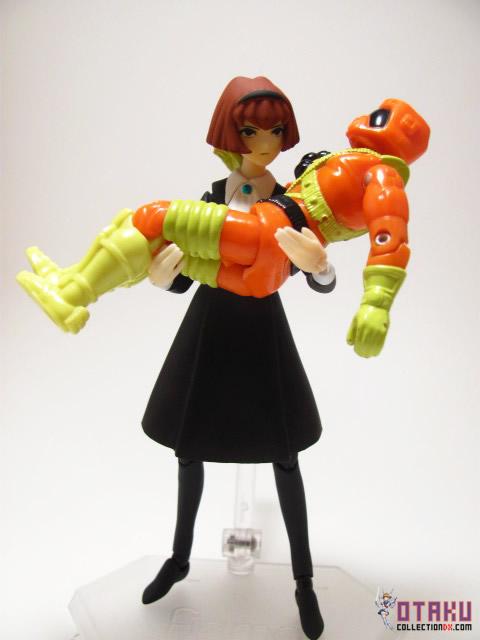 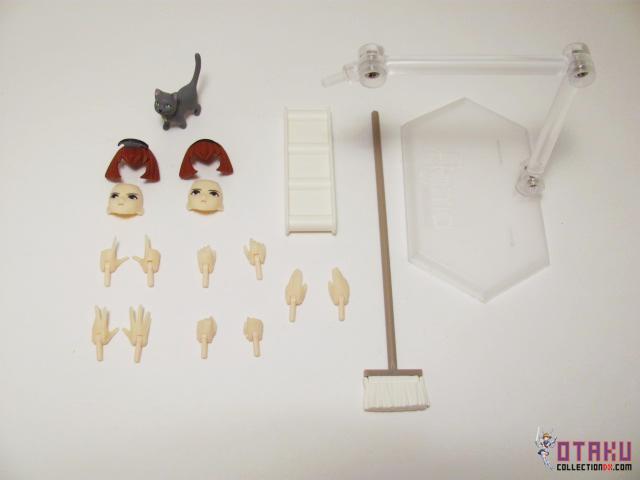 Pero -- the kitten from Act 8 -- is cute as can be. Nice to see him come with Dorothy. In fact, with the addition of him and the broom, this technically makes this Act 8 Dorothy. 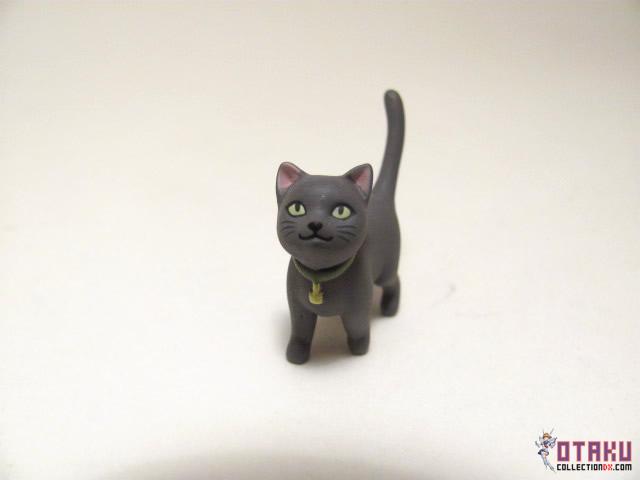 The main gimmick of the figma line has been the ability to swap and change faces for any occasion and pose. Dorothy has this gimmick, as she comes with another face and, for that matter, a new hair, too. 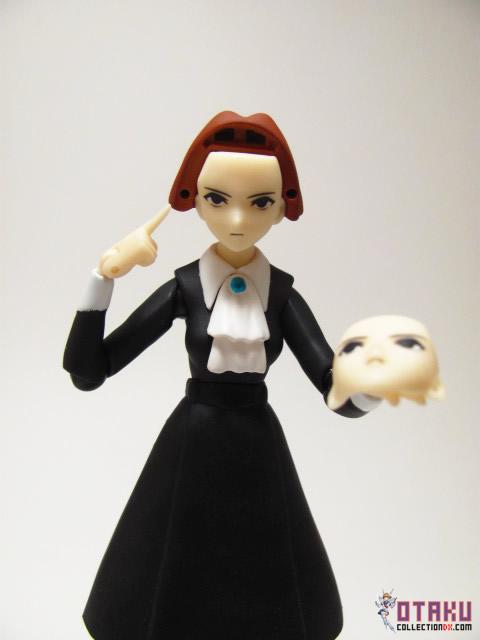 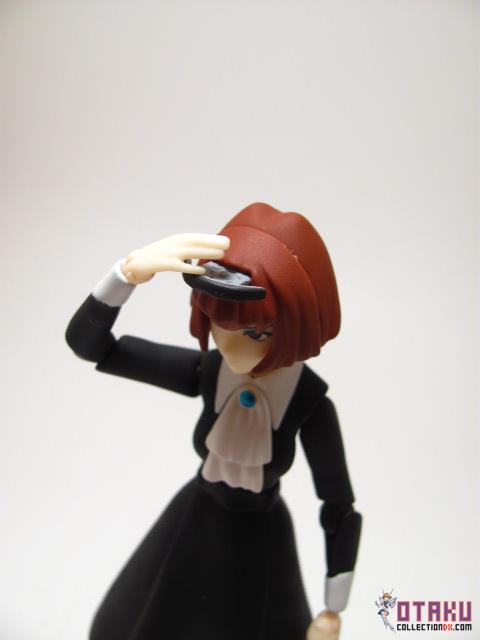 The only bad thing is that, while being and emotionless android, Dorothy's other face... is her looking to the right. Yeah, exciting, isn't it? 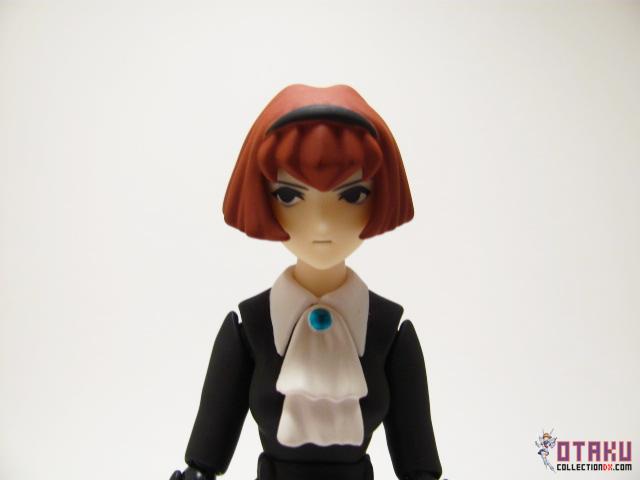 Dorothy's package also came with a backdrop with a perforated square detailing her character. This can be punched out and connected to a di:stage so it can be custom tailored to her. 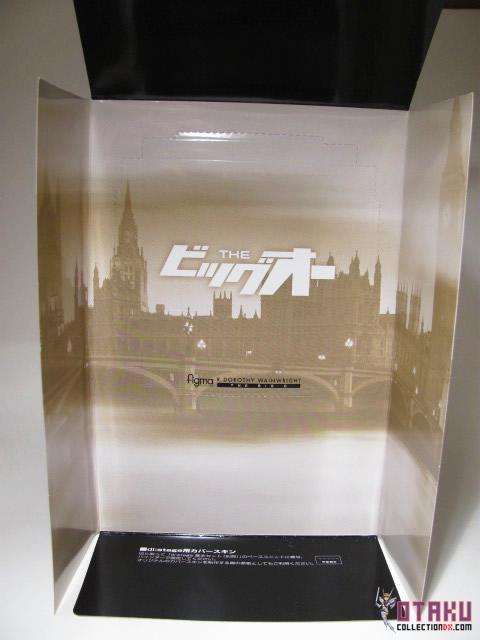 R. Dorothy Wayneright is a solid if not somewhat boring figma. She represents well her animation model with a nice sculpt and detail and has very good articulation and very character specific items. Being as plain as she is, I can only recommend her to fans of the show; I got her because The Big O is my favourite anime, and I feel that she is tailored to such a person: a fan.

Nonetheless, she is a very welcomed addition to my collection and a very well made, quality figure. 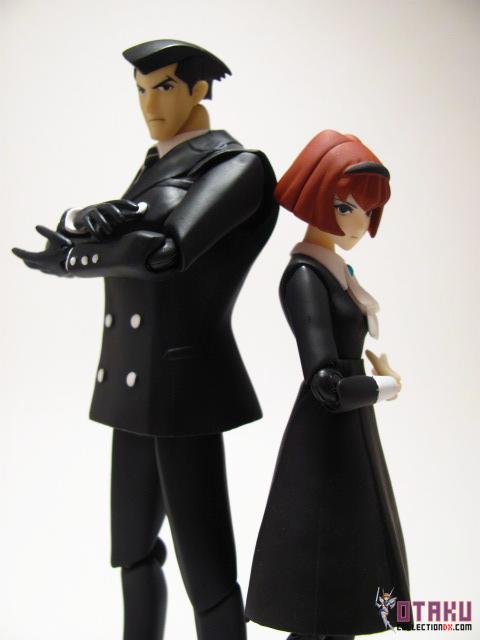