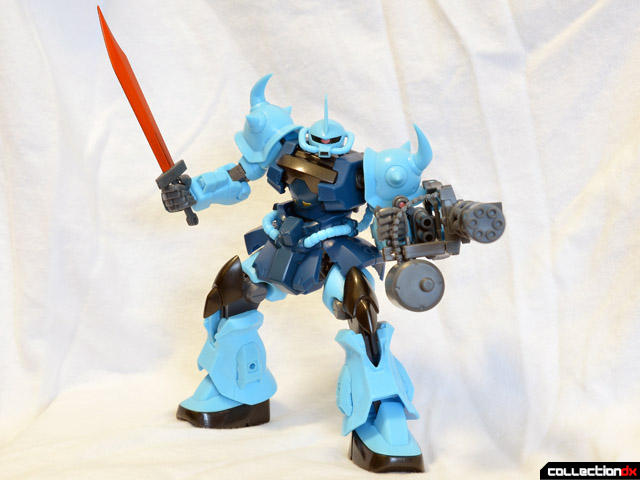 The MS-07B-3 Gouf Custom from Mobile Suit Gundam: 08th MS Team is a design that has caused a lot of arguments.  On one hand, it takes what was already one of the most infamous and fearsome bad guys from the original Mobile Suit Gundam and cranks up the ferociousness to eleven.  On the other hand, it is a bit too ‘super duper’ for the series it came from, going against a lot of the grounded, ‘realistic’ feel 08th MS Team was aiming for.  Love it or hate it, the Gouf Custom makes for one heck of a toy. 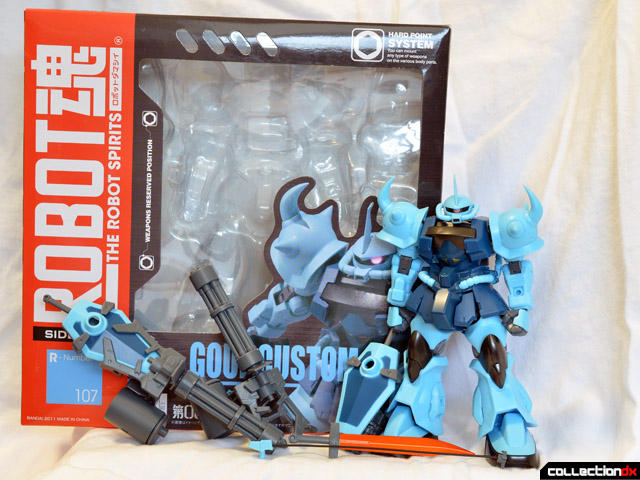 The Robot Spirits Gouf Custom is a Hardpoint spec release like the previously reviewed MS-06 Zaku II, meaning that it comes with a ton of interchangeable parts.  Included in the package are: 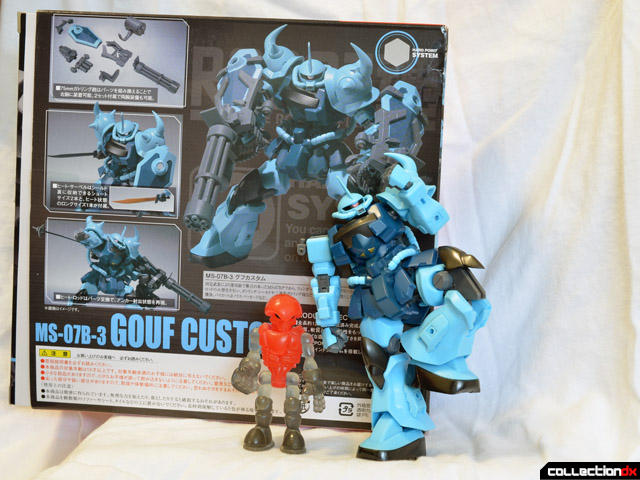 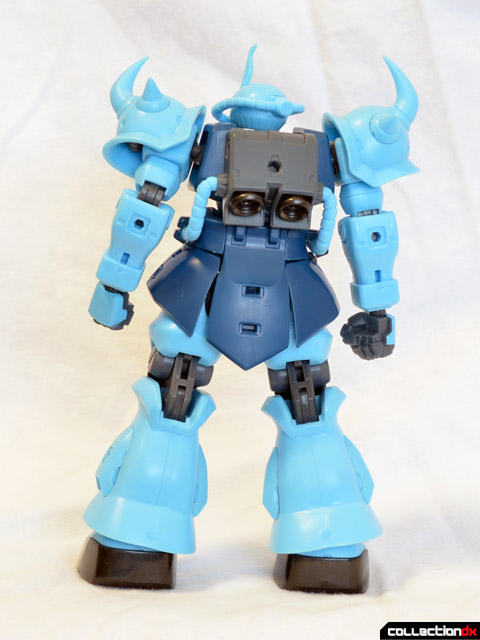 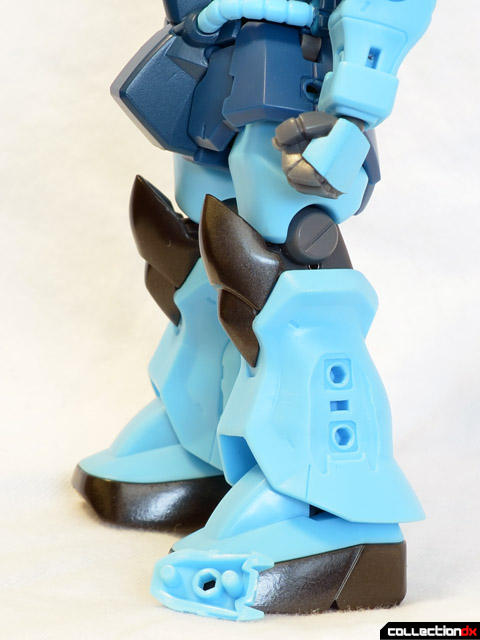 One thing I did not realize before getting this figure was how modular the weapons were.  The Gatling shields are made of numerous removable parts for different configurations.  The Gatling gun systems can be removed entirely, leaving a more traditional Gouf shield and the 3-barrel machine gun, which I always thought made much more sense than the gun hand on the normal Gouf. 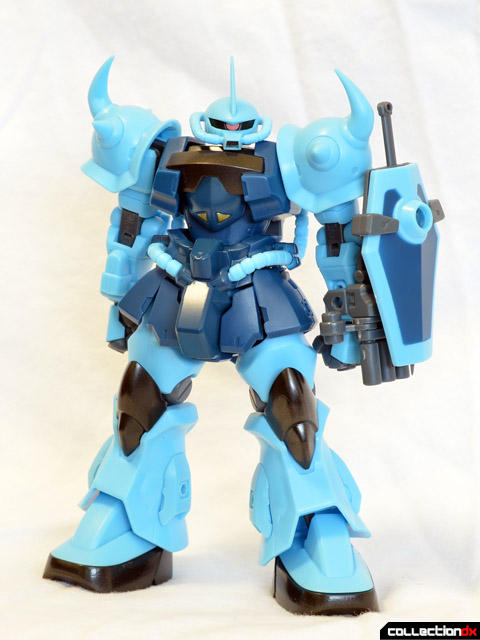 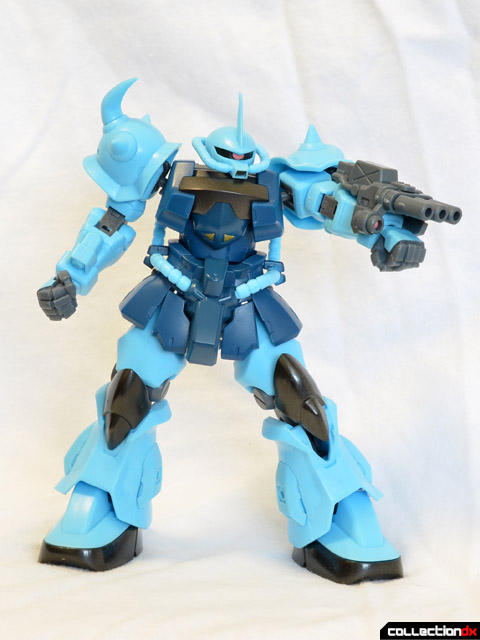 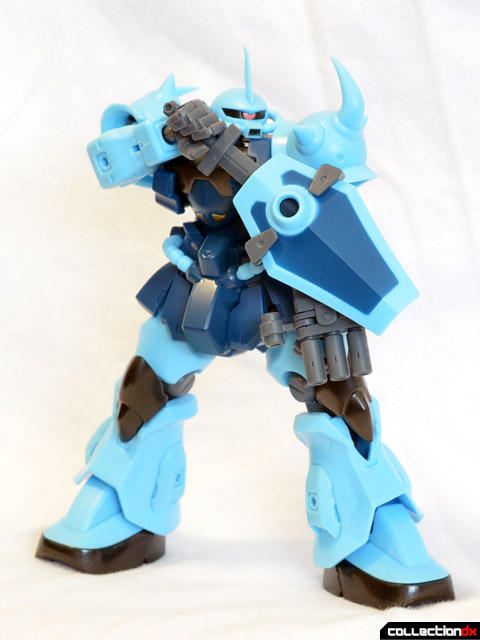 As a basic, mean looking Gouf, this figure is a blast.  For such a chunky, imposing sculpt, it moves great, and looks dangerous doing just about anything.  It’s posable enough to draw the Heat Sword from behind the shield. 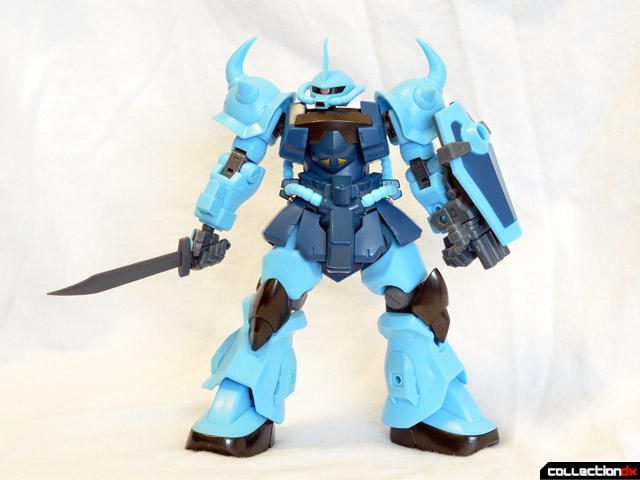 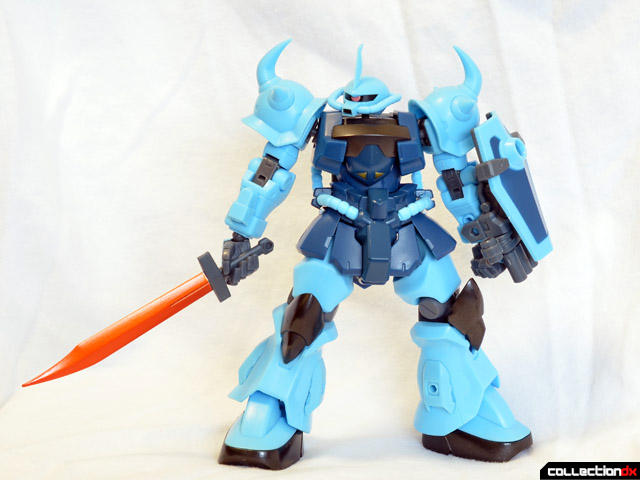 The activated Head Sword is bigger than the deactivated ones, since it does not have to fit behind the shield.  It features a metallic orange paint job that looks great. 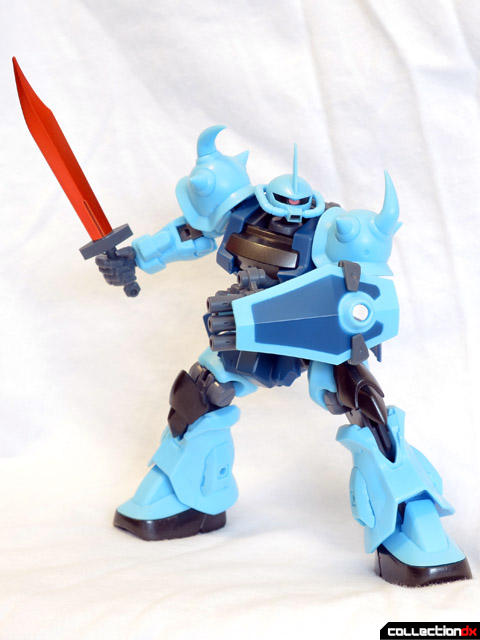 The sword is hard plastic and sharp. 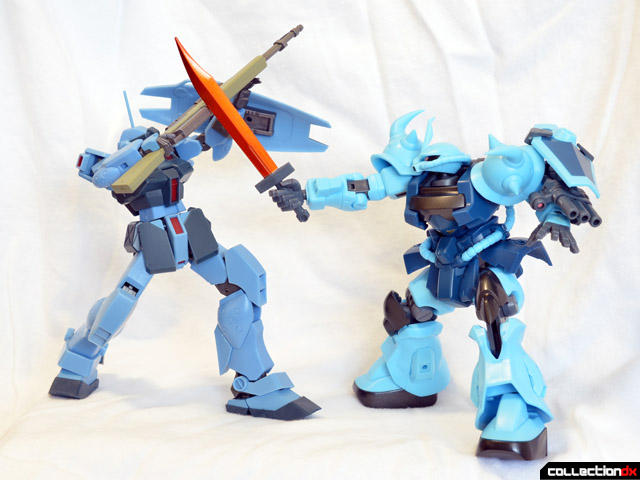 The Gouf looks awesome pitted against another poor mobile suit. 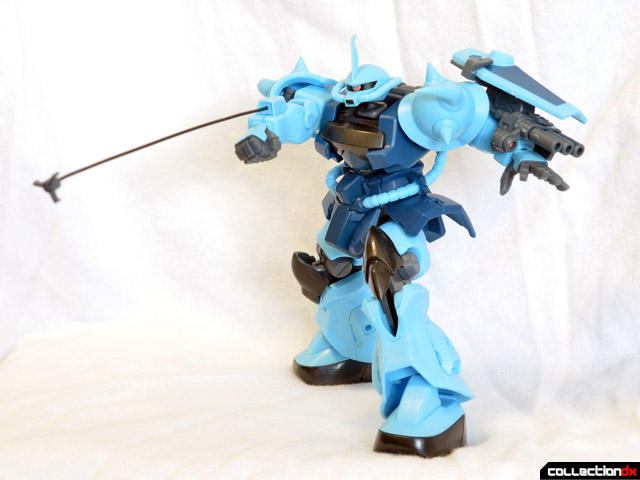 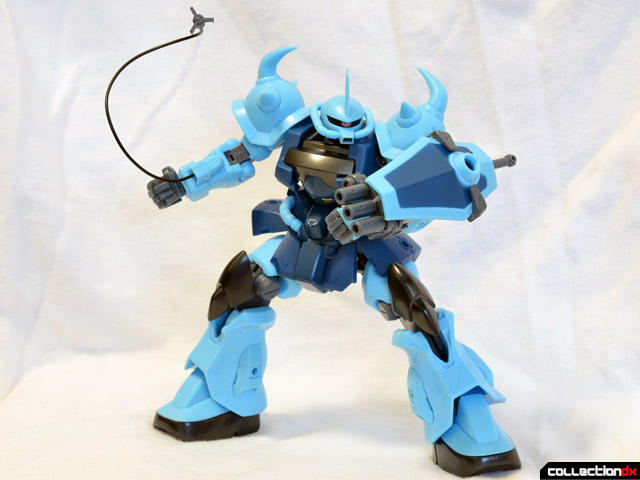 The Heat Wire mount on the wrist swaps for a second mount with the deployed Wire, which is bendable.  It is very fine and easy to pose, but stiff enough to support itself and the claw end. 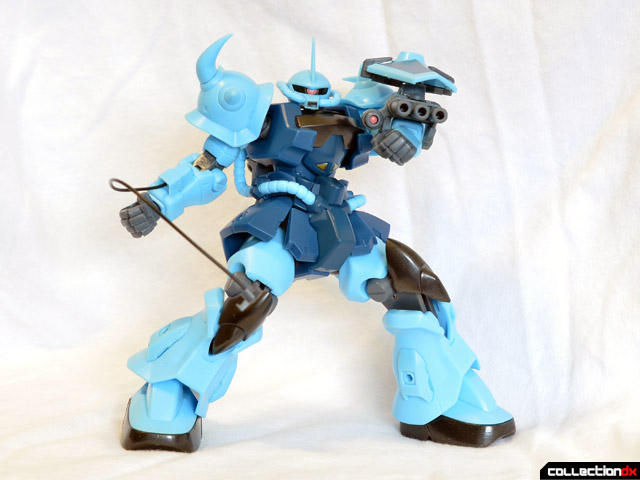 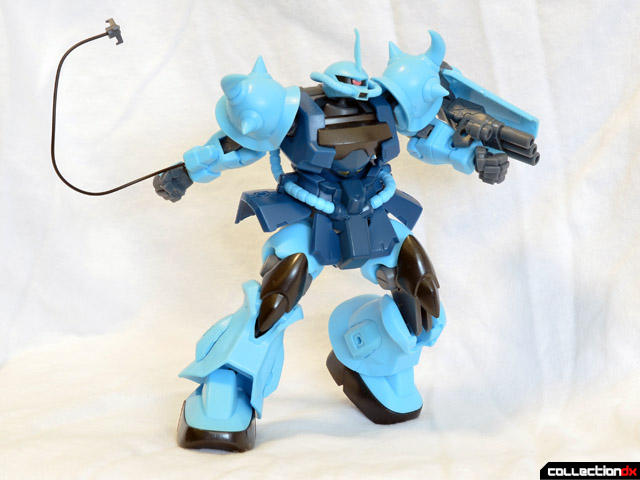 I think this is my favorite loadout, since the Heat Wire is so fun and expressive… 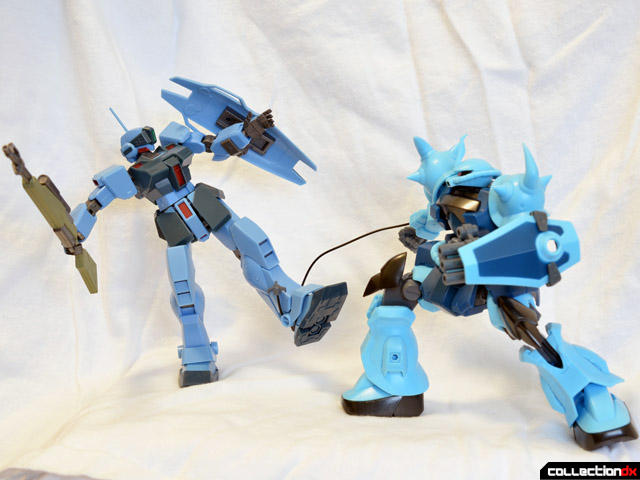 …and dangerous!  A GM Sniper is pretty much the worst place to be when an up close and personal Gouf shows up. 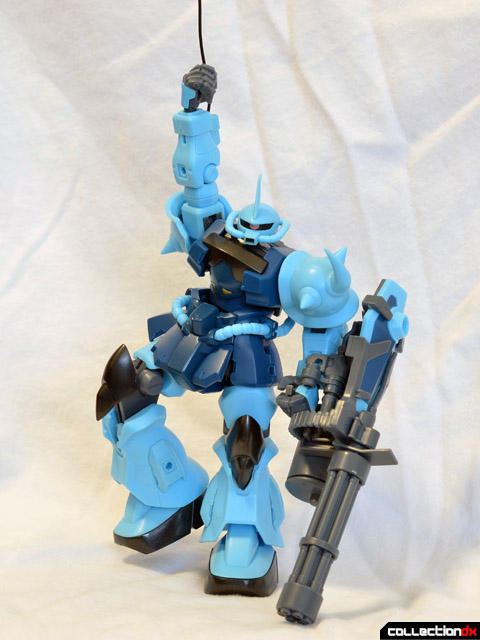 The basic weapons are cool, but I know what everyone wants to see is that nasty Gatling shield setup that made Norris Packard’s machine so infamous.  This figure does not disappoint. 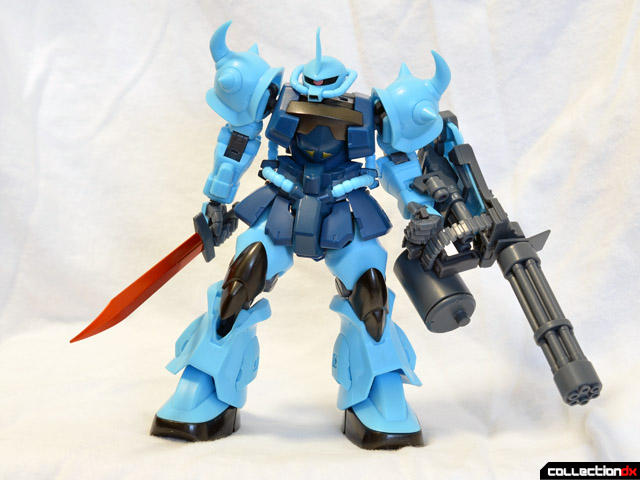 The Gatling gun is made of multiple parts and features a removable ammo drum, flexible ammo belt, and trigger handle that fits into the hand.  I found, however, that it is maybe made of a few too many parts, or does not fit together quite securely enough, because it is easy to dislodge the gun barrel or the ammo drum when posing.  I also found that the shield has a tendency to bump up against and knock off the shoulder armor. 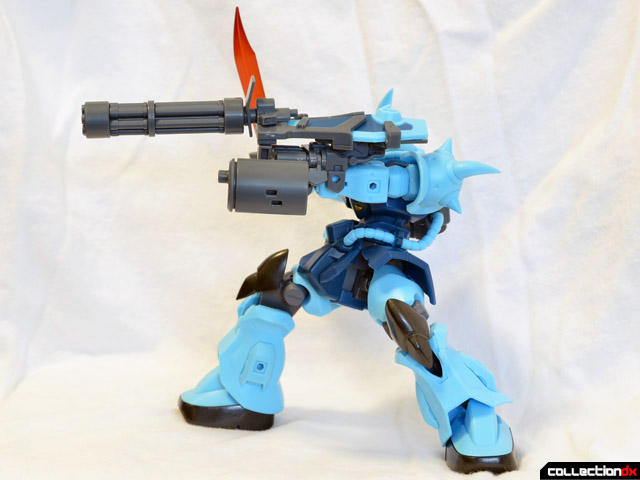 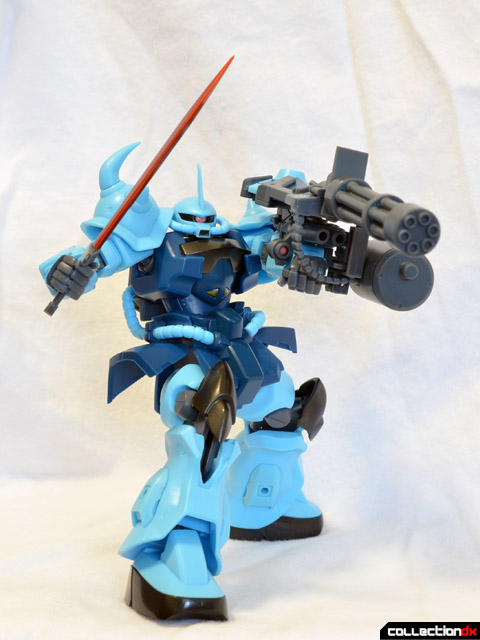 Secure or not, the setup looks gnarly.  All of the articulation on the figure is nice and snug, and has no problem supporting the gun system in whatever pose you come up with. 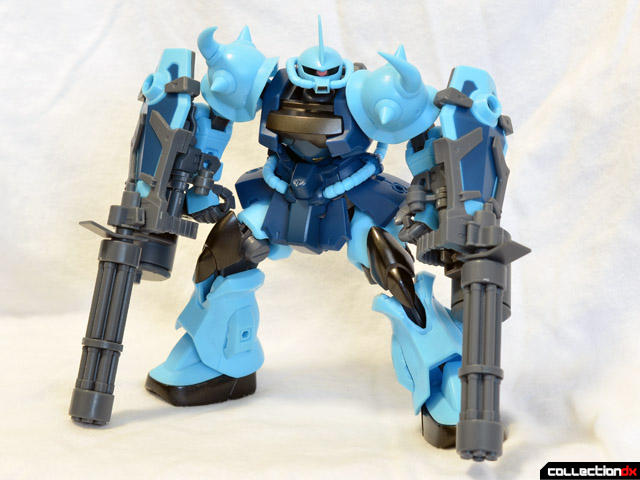 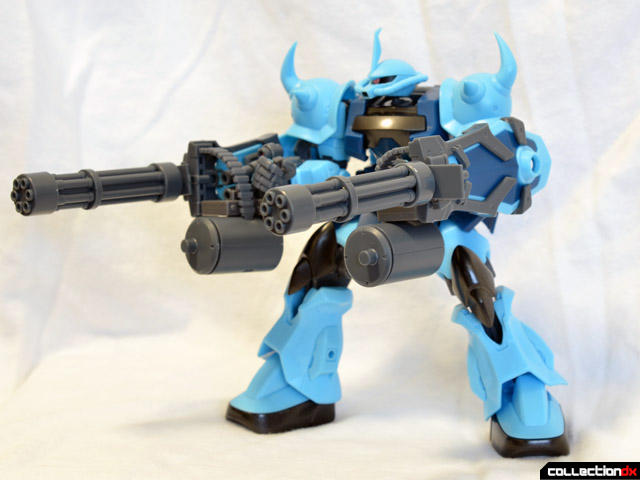 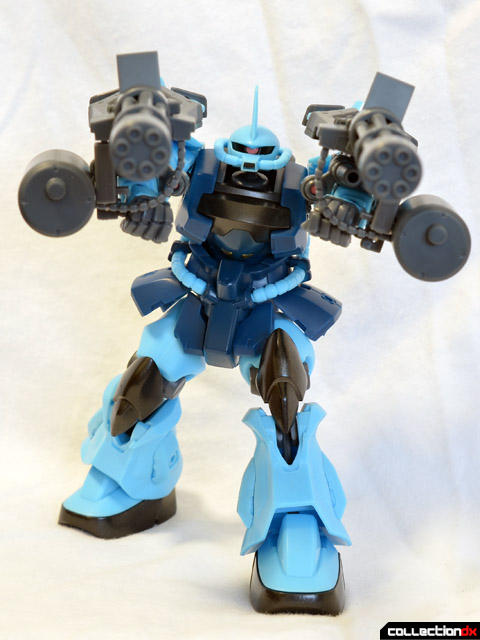 An unexpected surprise from Bandai was a whole second Gatling shield system for the right arm.  The Double Gatling Gouf is a hulking brute of raw firepower.  It looks awesome in this configuration, but suffers from twice as many parts being easily dislodged. 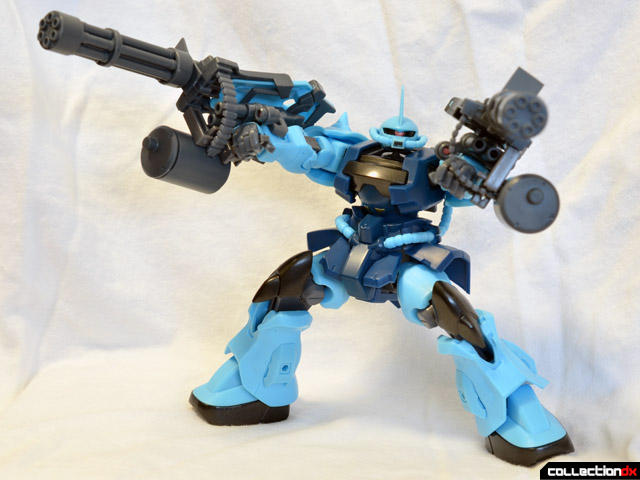 Still, this is a figure not to be trifled with.  It’s just bullets everywhere. 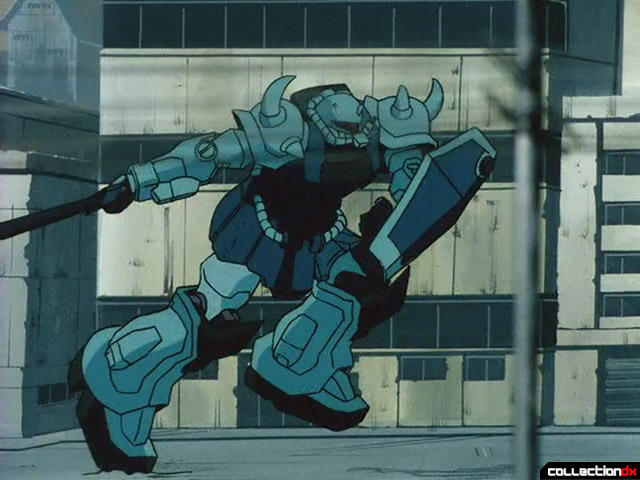 The chunky styling of the Gouf Custom matches its appearance in 08th MS Team perfectly. 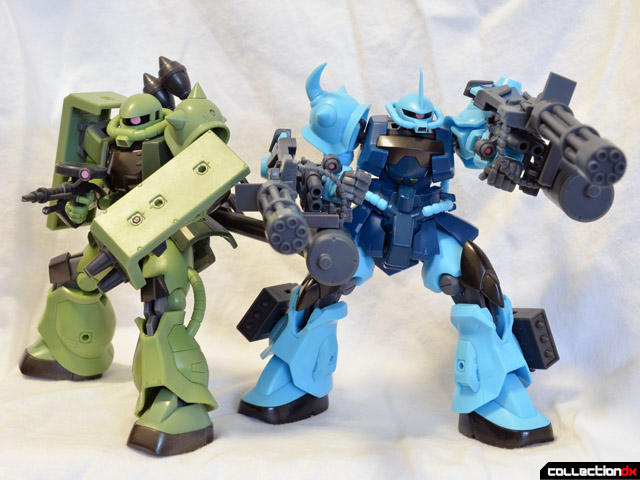 The Gouf Custom also looks great next to the Robot Spirits Zaku II.  Since they are both Hardpoint releases, you can mix and match accessories.  The Gatling Shield system won’t mount straight on the Zaku, but you could get creative and find a way to make it work. 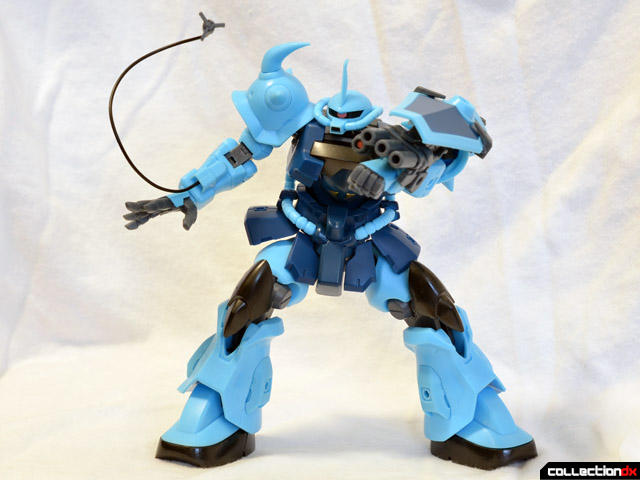 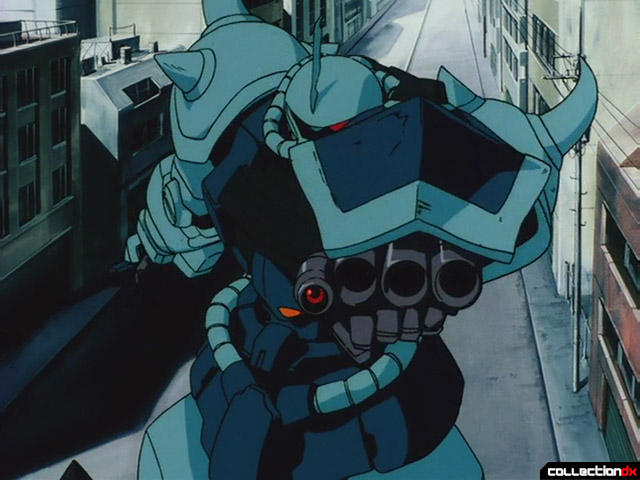 I love this figure.  At first, I was fixated on the double Gatling Shield configuration and was getting frustrated by all of the parts, but I like that it comes with enough parts and options to pick your own favorite configuration and have it still look good.  My preferred setup is the shield and Heat Wire, or the Heat Sword, but it looks good and is fun to handle however you set it up.  The hefty sculpt perfectly matches the over the top badassness of the Gouf Custom in the anime, and it looks great giving your other figures what-for.  Here’s hoping for some more 08th MS Team Robot Spirits soon, because I would probably buy multiple squads of GM Ground Types!

You can pick up a Gouf Custom from Hobby Link Japan!

15 comments posted
I hate this Gouf and

I hate this Gouf and everything it stands for.

But the toy is still cool :3

How can you expect realism from anything with a Tomino name?

But I head Zaku and Gouf in Roboarts series are kinda failed.

I am still looking for Zaku and Gouf of "Special Creative Models" series.

The 8th MS Team is probably my favorite Gundam show. I was thinking about picking this up since it wouldn't exactly cost an ARM or a leg.

Neat review. I love how Banadi randomly flips between giving the figure JUST enough accessories or just going overboard. You can never have too many gatling guns.

Not with the toy, but with the design; the one picture makes it look like the firing chamber is connected to the *center* of the barrel assembly, rather than offset to match up with the actual barrels. Yeah yeah, I know, "gun nut lol", but it's a little silly-looking when they put such effort into making the piece at all.

You are correct. The oddness is exacerbated by the gun barrel assembly being much larger than on the line art, so it's a lot more obvious that it lines up to the center, rather than the barrels.

Yes, it's one of the realistic Gundam series... IMHO Gouf custom is strong but not that strong, it is run out of ammo and Norris Packard is a damn good pilot... Shiro Amada don't stand a chance... The toy itself looks great

It's ok. You will admit to the mistakes of your youth soon enough.

I make no mistakes, for I am a MAN.

SEXY. I'ma ask my wife if she's cool with polygamy 'cause I'ma marry that thing as well.

Yeah hes pretty cool but the shield bits do fall off quite a bit. I alsoe dont like the ugly knee joint they used. I have an scm gouf and he looks wayyyy bette than this with just as much articulation as this and a nicer knew joint system. Also only cost around 15 (if you got it when it first came out). He doesnt have the hard point system but a lot of that stuff falls off easily and a lot of combinations look awkward to me.

still hes an awesome figure, if I didnt have the scm version he would be the best iteration of this character to date.

God, almost 10 years and Bandai still hasn't made an Ez-8 Robot Spirits to pit against this thing.