I've been collecting the SIC Kiwami Tamashii line for a good bit now, and have been pretty happy with all of the figures I've owned and had the chance to mess with. All of them have been pretty fantastic 4 inch action figures. However, Kamen Rider Agito Ground Form blows them all out of the water. 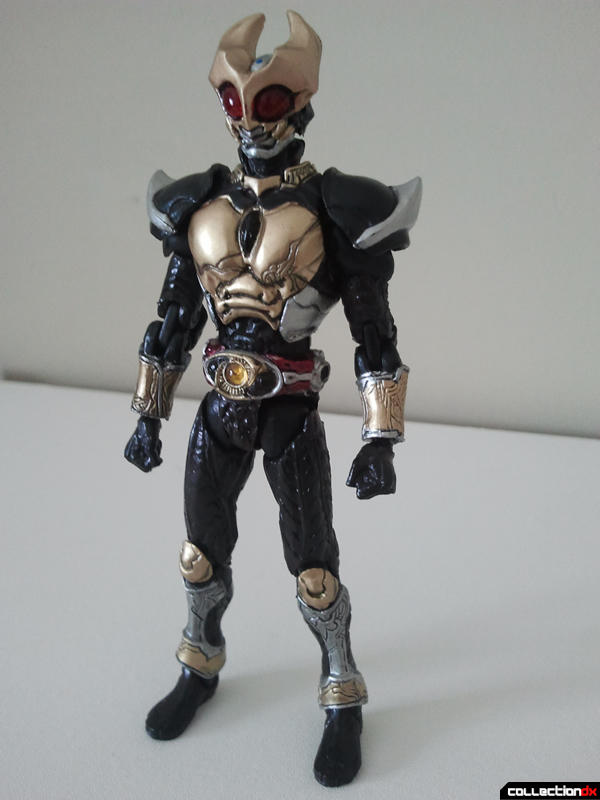 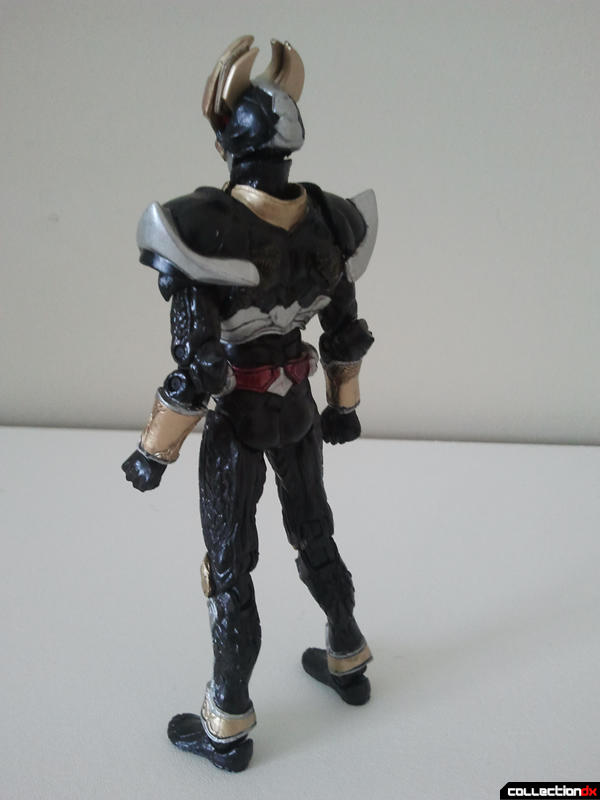 While the Kamen Rider Blade figures went for a super stylized techno-look, Agito is much more organic in his design. The armor is all cracked and runic, as if it's hundreds of years old. The arms and legs have scales running down them, as if whoever is Kamen Rider Agito is actually changing into a monster, more than it looks like some dude in a suit. 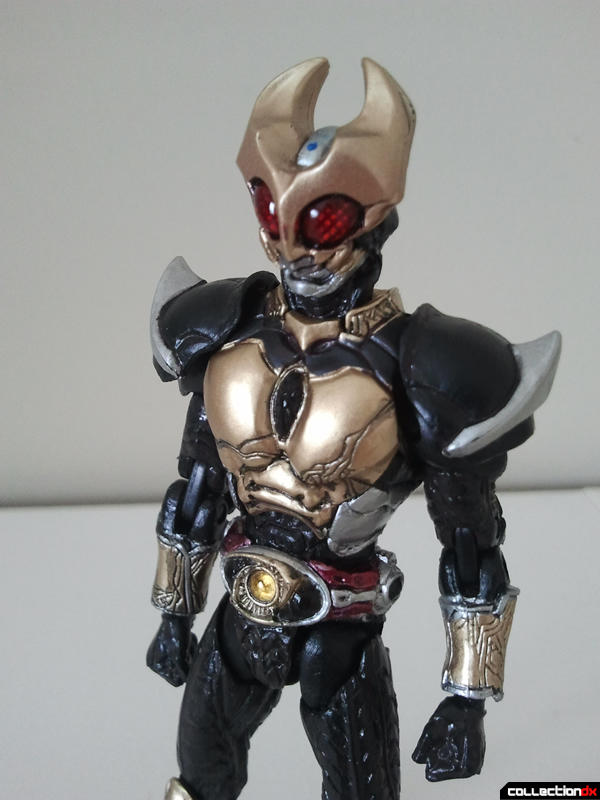 Agito has huge buglike red eyes and they're gorgeous. The horns on his head are slightly exaggerated, but work well with this style. The belt is also extremely well painted and sculpted, with a tiny yellow gem in the middle as well. 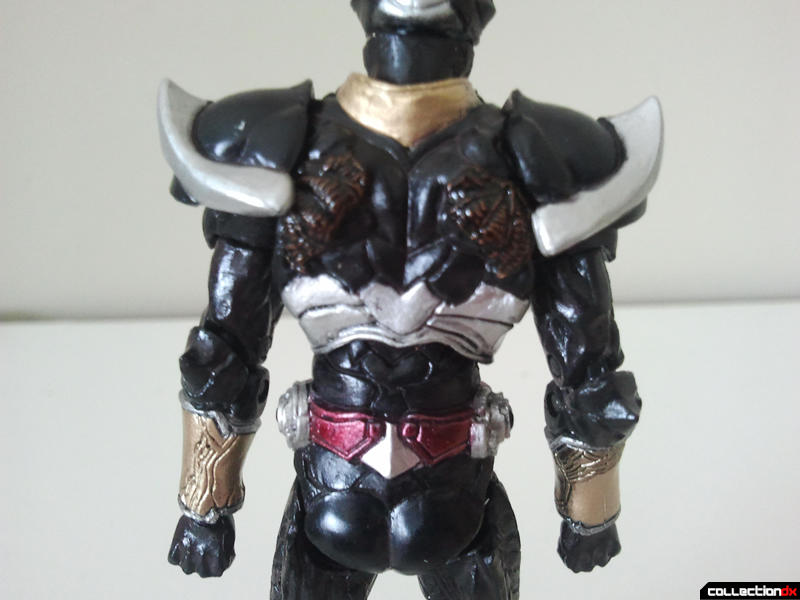 There's some new detail on the back though. A pair of wings are sculpted on the back that look like they are getting ready to bulge right out of his back; more of the reason why I think this design is slightly monstrous, and why I also enjoy it so much. 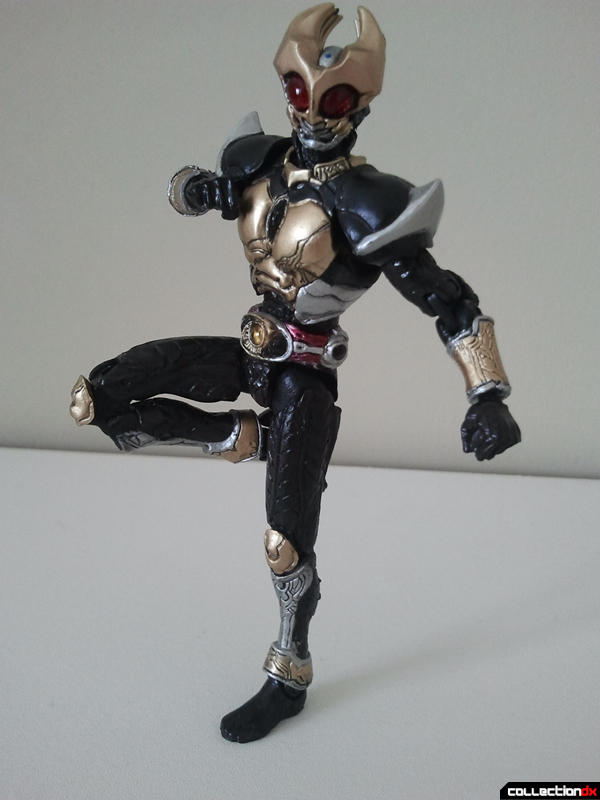 Previously I've said that the articulation on SIC Kiwami Tamashii is very good, and Agito is even an improvement on that. The double-jointed knees have an incredible range thanks to Agito's minimalistic design, and the arms have become true double-joints instead of the previous swivel-ball joint system. Despite the huge shoulder pads arm movement is not limited at all, and is a marked improvement over the Kamen Rider Blade figures. 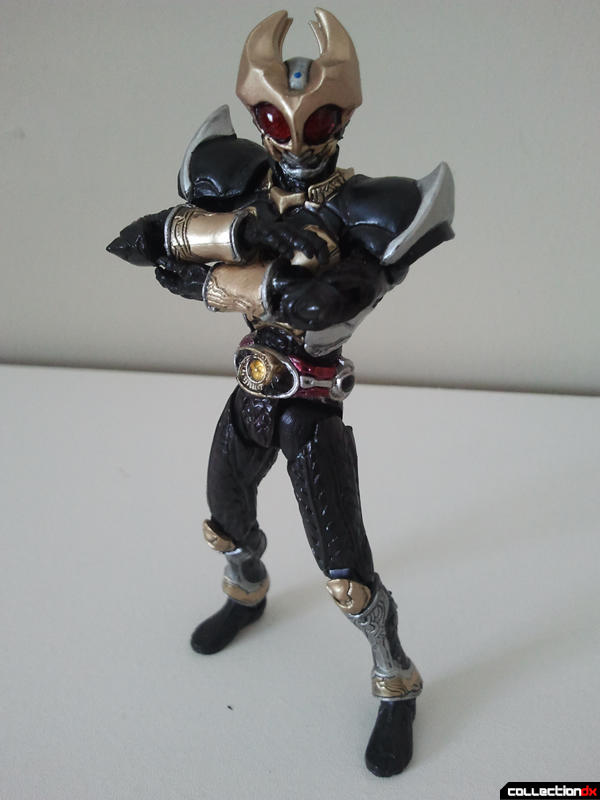 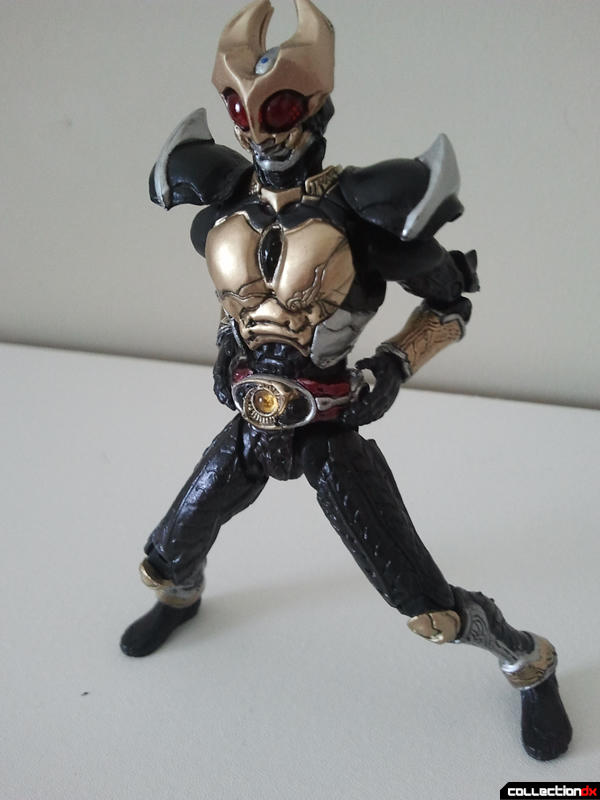 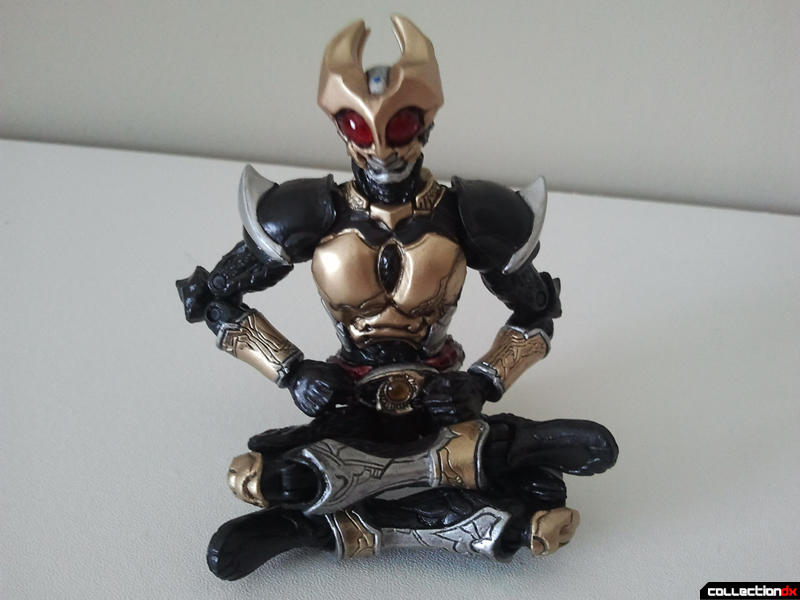 He can even cross his legs! 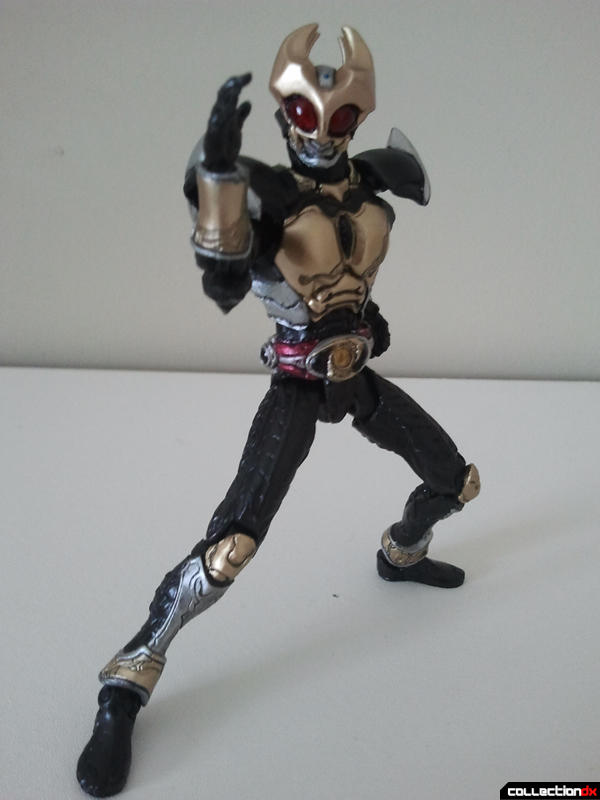 Agito comes with only a pair of alternate hands for accessories. He comes with a pair of calmly splayed hands (That's right, no rage hands here!), and a pair of open hands for holding things. Although Agito does not come with a lot of accessories, he comes with everything he needs. Plus if you really need him to be holding a weapon, GI Joe weapons fit in pretty nicely. 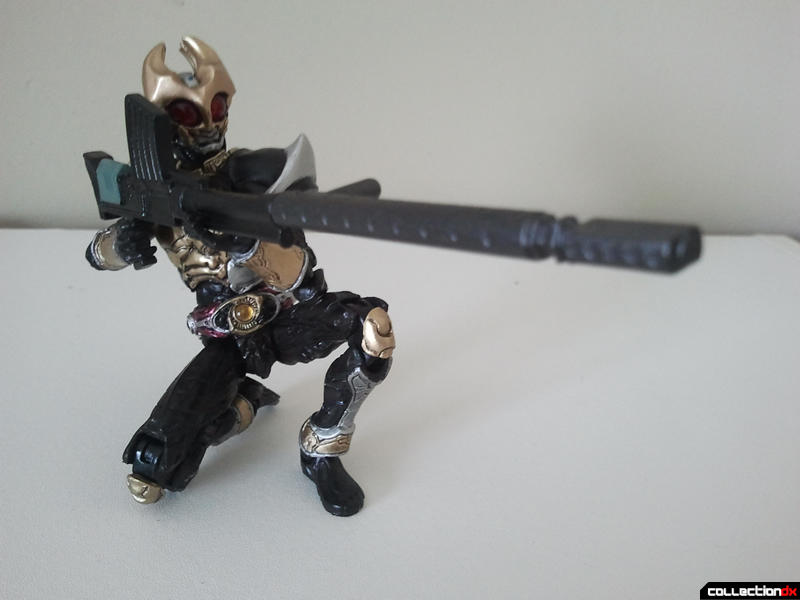 Agito has one more feature, and it's a very clever one. In the show, Agito's head crest would open up before he did a Rider Kick. This gimmick is built into the head with a pair of fins and a swivel. All you have to do is pull them out to get this mode. It's very smartly done and a fantastic addition to an already great figure. 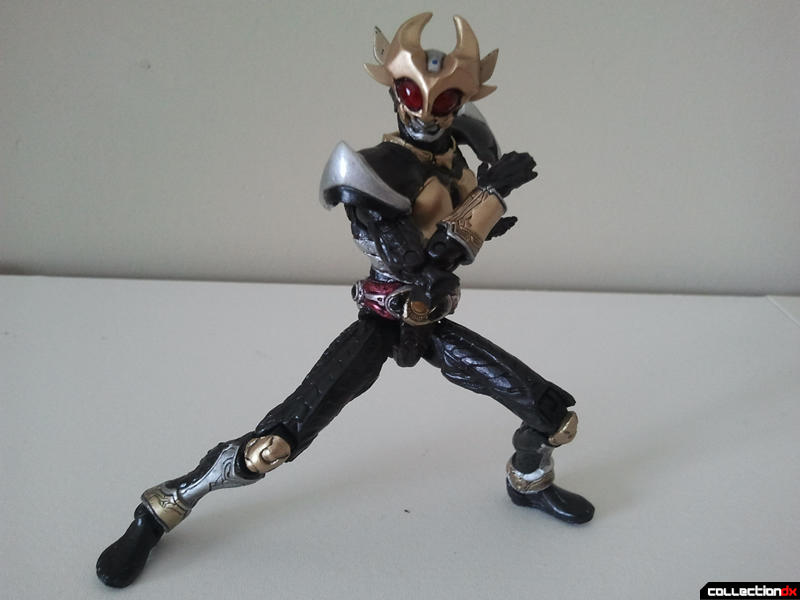 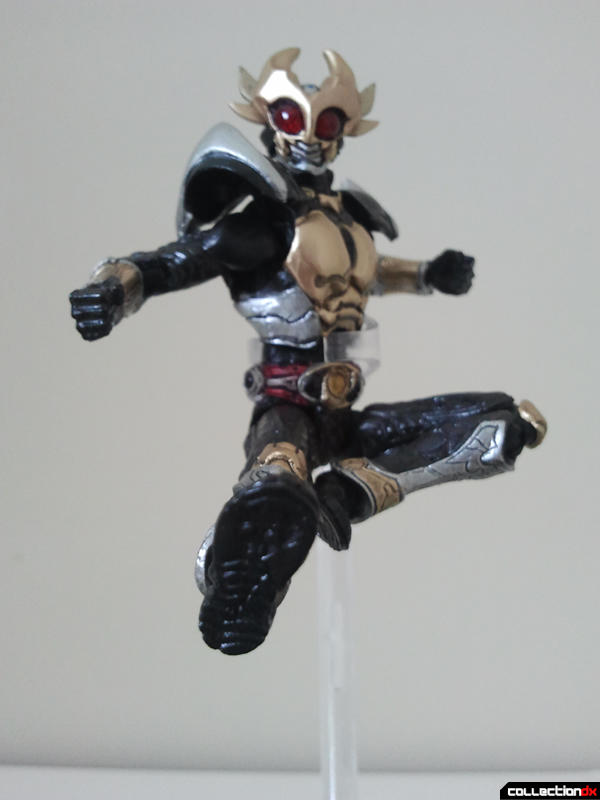 I got a few of these: Den-O Sword form, Blade and Garen. I like them but the fact that they were on clearance worries me. Are these particularly bad examples of the line or just unpopular or overproduced? Since you mentioned haveing several, do you think the line overall is improveing with time or stagnating?

I'm considering getting rid of my S.H. Figuarts and venting my rider-lust on these smaller, cheaper representations. I love figuarts, but they cost a lot and in a competition with Super Robot Chogokin... well, giant robots ARE my first love. A collector on a budget needs to make the hard choices, no matter how many lines he may like.

I would say that the line seems to be getting better as time goes on. Agito has better double jointed elbows and improved shoulderpads over say, the Blade figures. I think that the ones you have are all pretty good. The Blade ones have some limited shoulders, but other than that they are very solid I think.

The reason that they may have been on clearance is that these figures are not show accurate and very stylized, something that I love, but is not to everyone's tastes. This is not one of Bandai's more popular lines like Figuarts or Robot Damashii, so they produce them a bit more slowly and they don't sell out nearly as fast.

I have to admit that when I messed with my first Kiwami Tamashii, I also thought about collecting these instead of Figuarts. Not that Figuarts aren't great, but these are just such a great value for their pricepoint! I really hope we get more Heisei main riders like a Kabuto, W or Decade. That would make me very excited. Although a Kaixa and Side Basha are still pretty awesome.

I've seen the larger SIC Kabuto and he is badass. The rest of the Kabuto gang would be equally cool.

SIC KT OOO's? I can dream too, right?

Thanks for the advice and opinions, I will take your words into consideration as I figure out my next move!

Hi, I've been following CollectionDX for some time now, but this is the first time I feel like commenting, so sorry if anything's worng.

About the review, thanks for it! Sometime ago I was after the "Full" S.I.C version of Agito (the one that comes with Machine Tornador), but HLJ's stock ended before I could do anything, so I waited.

Last month I saw at Amiami the S.I.C. Kiwamii Tamashii Machine Tornador for pre-order and judging by the low pricee of the bike and Agito I decided to get both. I'm still waiting for it to arrive, but I confess I was a little worried about the size. I'm happy to hear so well of the figure! Thanks again!

About the line, I think it's a great one. Though I own just S.I.C. Shadow Moon I've always liked the redesigns of S.I.C.s, specially for the older Riders, I mean, they get closer to what they really are: monsters like the ones they fight, but that fight for justice.

Nothing wrong with comments my good sir. Glad to hear I posted something to get you commenting in the first place!

I have not preordered the Machine Tornader myself, but I do plan on getting my hands on it in the near future. A Kamen Rider needs his rider after all.

I also love the more monstrous designs of the SIC Kamen Riders. The ones I always bring up in point are the Black RX, and the original SIC Kuuga. That thing is so spindly and nasty looking, I absolutely love it!

Awesome! I do so love Kiwami Tamashii's! I can't decide if I want to get this figure or wait for Trinity form...

You should be like me and just get all of them. Including that web exclusive Flame and Storm 2-pack.

He's got some nice calm hands there. No Rage Agito this time :3