This is basically what happens throughout the entire Friday the 13th film franchise. For those who are uninformed or not huge followers of American Horror-Slasher films, Friday the 13th is a film series that follows various protagonists and camp counselors as they are mercilessly beaten and dismembered by a lumbering serial killer known as Jason Voorhees. The films primarily take place around Camp Crystal Lake, where a young, handicapped child was neglected and left to drown. Depending on the film, the child either barely survived or was supernaturally reawakened to wreak havoc and murder anyone who dared trespass on the forests surrounding the lake.

With ten solo films, one crossover movie, and a remake there is so much backstory here that I can't possibly go into it all. Friday the 13th is one of my favorite film franchises, and I think everyone needs to see them, if only to appreciate how the campy teen slasher genre was born. 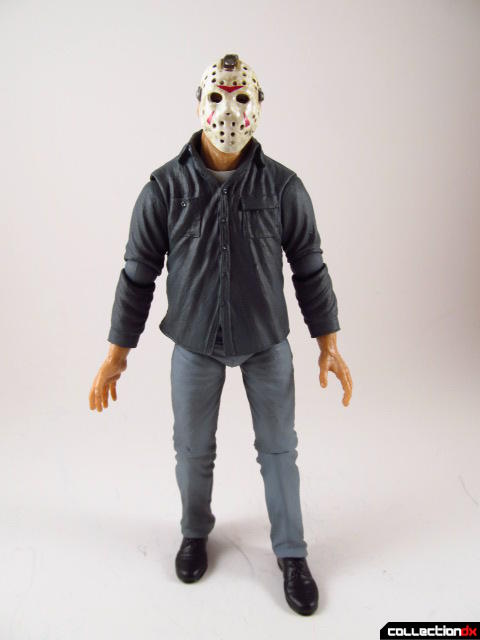 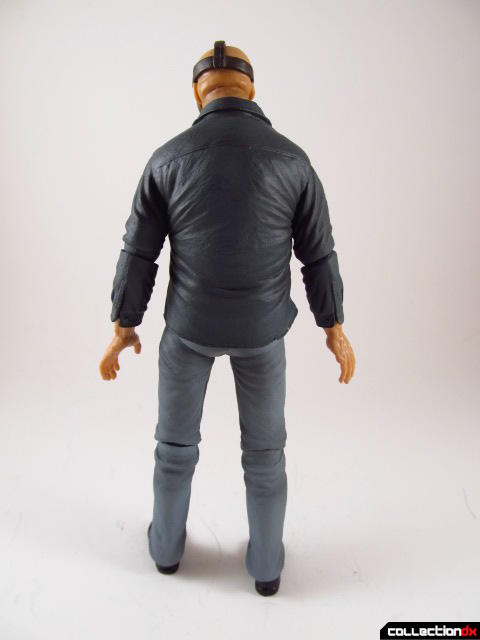 Onto the toy. Here we have Jason as he appeared in Friday the 13th: Part III. Here's a bit of trivia for you! Jason the killer didn't actually appear in the franchise until Friday the 13th: Part 2! In the first film, his mother, Pamela, was avenging the death of her son by ruthlessly murdering any and all camp counselors at Camp Crystal Lake. Also, when Jason was introduced as a killer in Part 2, he wore a bag over his face! He didn't find his trademark Hockey Mask until partly through Part III.

Sorry, that was a small rant. It's the last one, I swear. 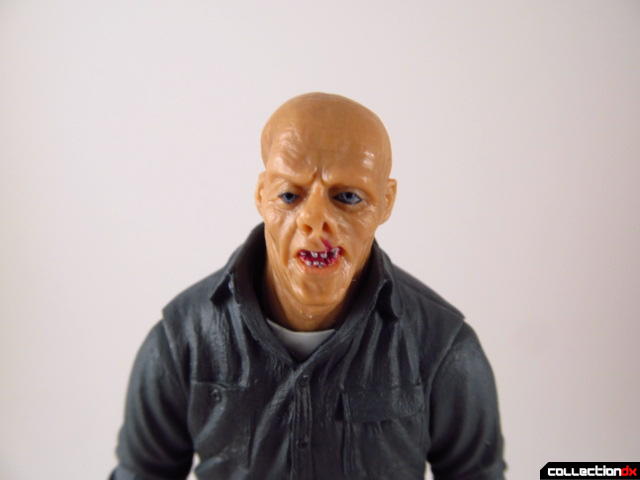 A face that only a mother could love. 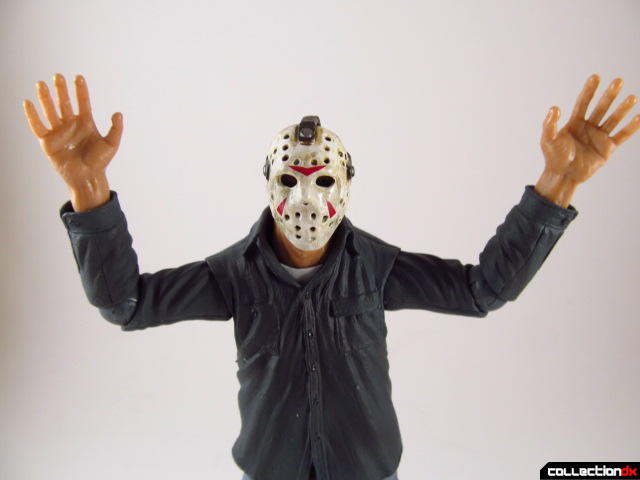 So here is Jason wearing his blue shirt and jeans, along with his hockey mask. Honestly, there's not a whole lot to say about the sculpt. All the details are there, it's just not too spectacular. While his shirt has wrinkles and texture, it's very simplified. I would've also liked to see more shading and paint applications on him, but that's not too large of a nitpick. He still looks like Jason, and people will definitely be able to tell if he's posed on your shelf! 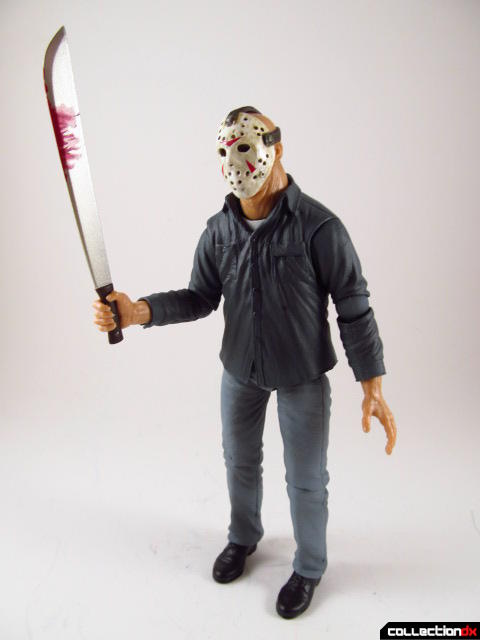 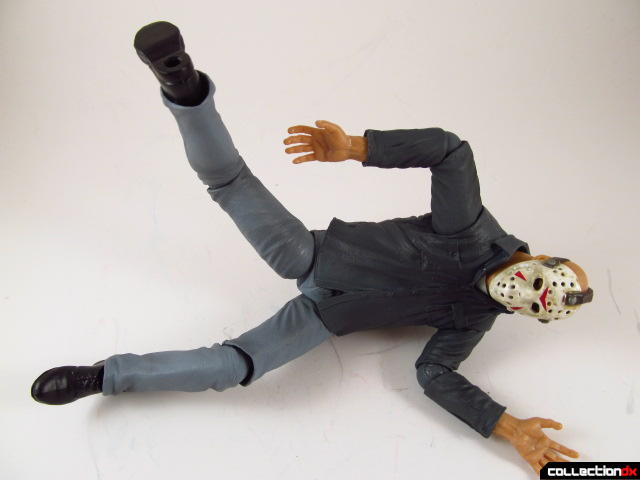 Also, while we're on the subject of posing, the articulation is merely so-so. I mean, he has all the joints he needs: from the neck, shoulders, elbows, wrists, chest, hips, knees, and ankles he's covered with Revoltech joints. The biggest complaint I have is the SEVERE lack of motion. Most of those joints can barely reach 45 degree angles, and some (such as the hips) can't even do that. When I first pulled him out of the box, I was drunk with anticipation of posing my Jason Voorhees like I would a Kamen Rider or Sentai hero. 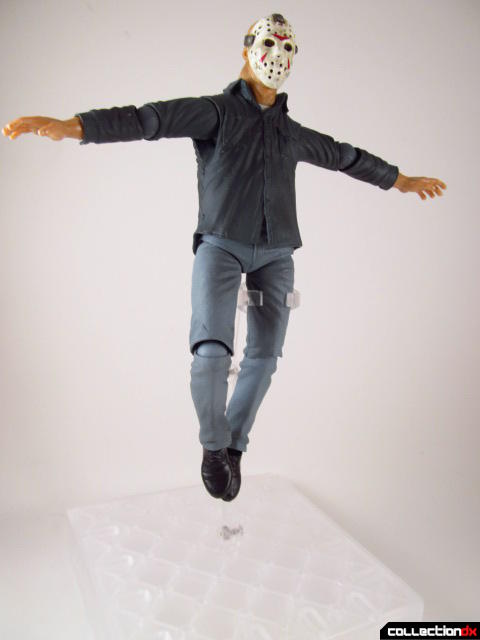 Sadly, I was forced to only have poses that Jason would ACTUALLY make... In the end, his articulation has the bare minimum of everything Jason needs, and absolutely NOTHING more. 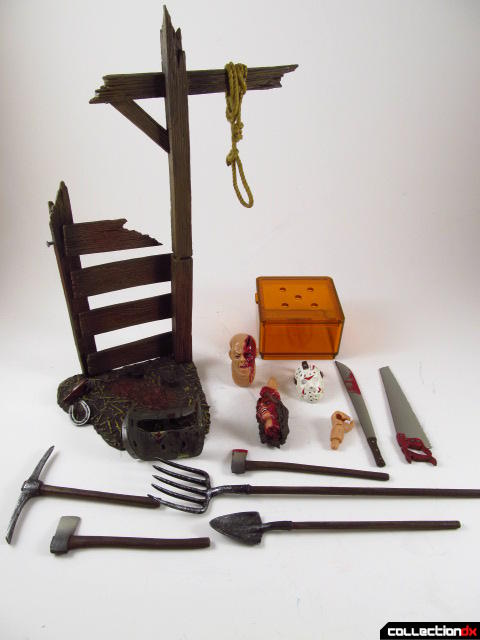 The place where this set shines is his accessories. Jason has access to ANY farming tool he could possibly need to cut down those lazy good-for-nothing teenagers! First off, he comes with a stand that is really well sculpted and painted. If Jason himself had this much love given to him, he probably wouldn't have had to kill people. Maybe. He also comes with his bloody machete, an axe, a bloody axe, a shovel, a saw, a pitchfork, a pickaxe, an extra holding-things hand, an extra bloody head for himself, an extra bloody mask for himself, and an extra hand holding THE SEVERED HEAD OF SOME RANDOM CHICK PERSON. 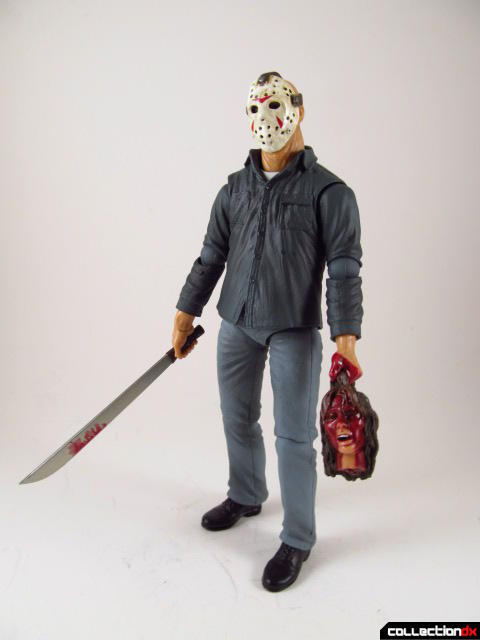 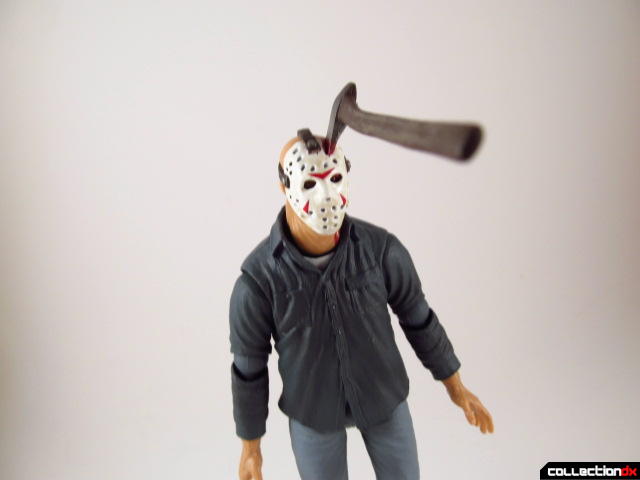 Do I have something on my face? Anyone?

I was SO GIDDY when I saw all the possibilities! Then I was sad, because he doesn't really look that great holding anything other than his machete. Plus, he can't even hold his saw. That was just sad. 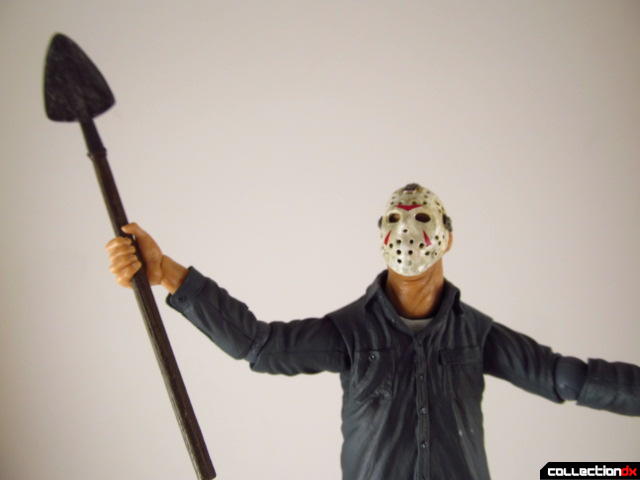 Eat ALL the cereal! 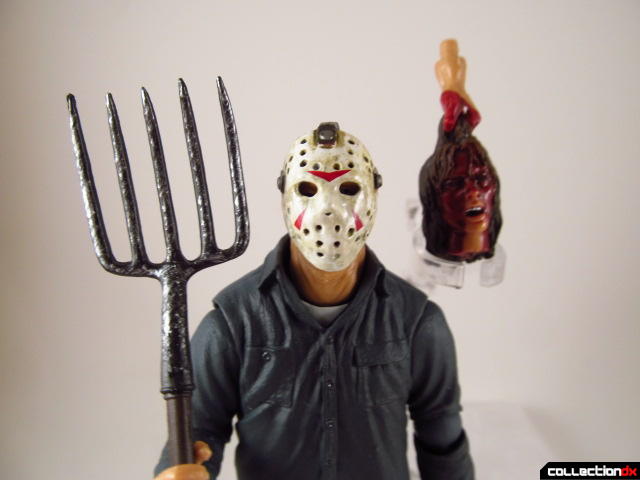 Basically, if you want a poseable figure of Jason Voorhees with a great stand and a lot of accessories, then look no further! If you want a finely-crafted masterpiece of the pioneer of Summer Camp Slashingness then you may want to look into something else. Personally, I think his simpleness gives him a charm that is lost in some of the other figures in this line and is totally worth getting if you like the look of him! Afterall, he's such a nice boy! 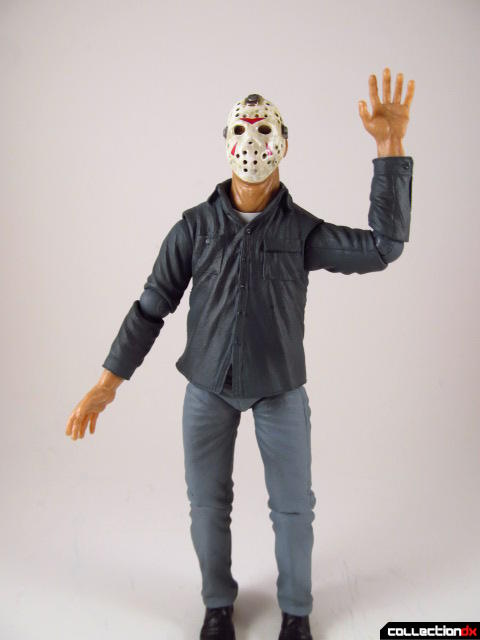 Y'all come back now! Y'hear?

6 comments posted
I have this figure as well

I have this figure as well and I have to say hes one of the last Revoltechs I bought. Im a Jason freak and hes an awesome figure a must own for sure. I actually think his unmasked face is one of the most accurate ive seen especially on such a small figure. The gash in his head is spot on and love the axe gimmick as well.

And you should not be proud of it.

Nice review! I too was a bit disappointed when I unboxed Jason and found his articulation a bit lacking. I'm happy with it overall though. The paint job on the severed head makes me a bit queasy so they nailed it in that respect. Plus, Jason oddly enough makes the perfect foil for my Revoltech Lupin III and Jigen figures and some pretty great little chase scenes can be set up with those 3. Anyways, I wish there was a Freddy Revoltech to go with Jason here, maybe with a furnace backdrop like the one NECA is making. Wishful thinking, I guess! Thanks and keep up the good work!

I think I'm happier with my McFarlane. Which I can't believe I'm saying.