It’s been a little while since Append Hatsune Miku came out and set the fan boys ablaze with her tiny jumpsuit and that missing stripe of top. The statue was glorious; the Nendoroid squee-worthy. So how does the figma measure up? 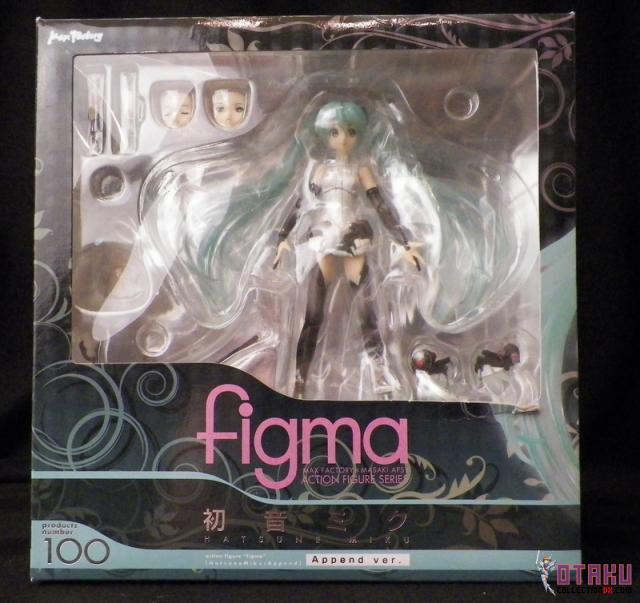 Her box is about average. 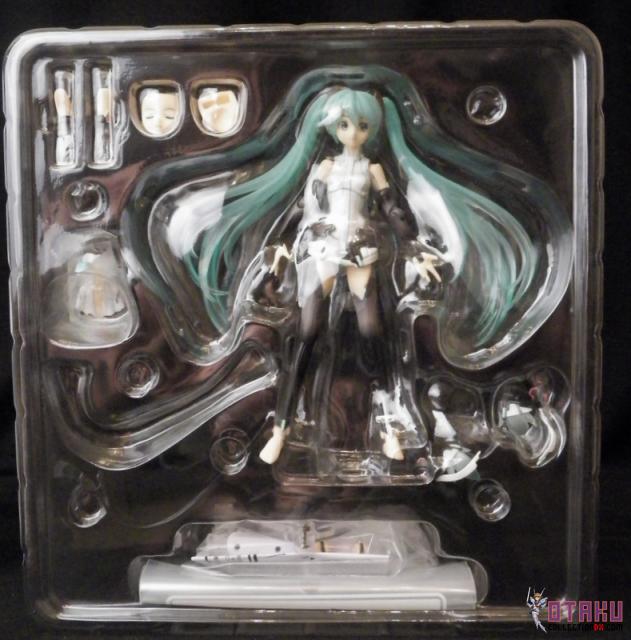 Her case, while covered in glare, is pretty standard as well. There isn’t a whole lot in here; extra hands, extra arms, extra torso. 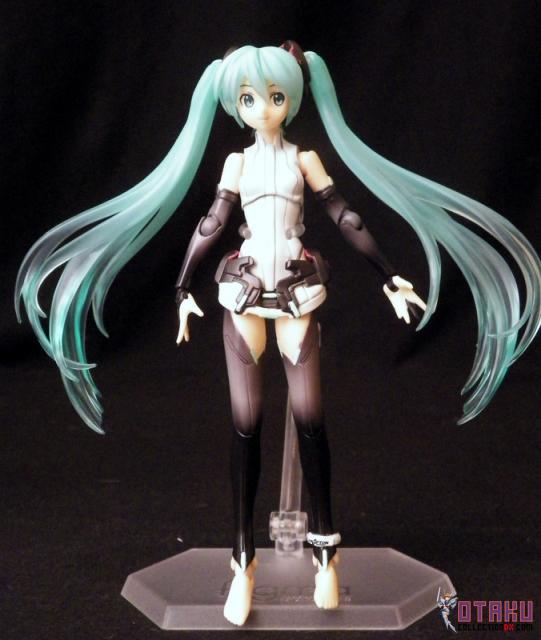 Out of the case, the most remarkable and immediately visible aspect of Miku’s new figma is her hair. This is not unique to this fima by a long shot. 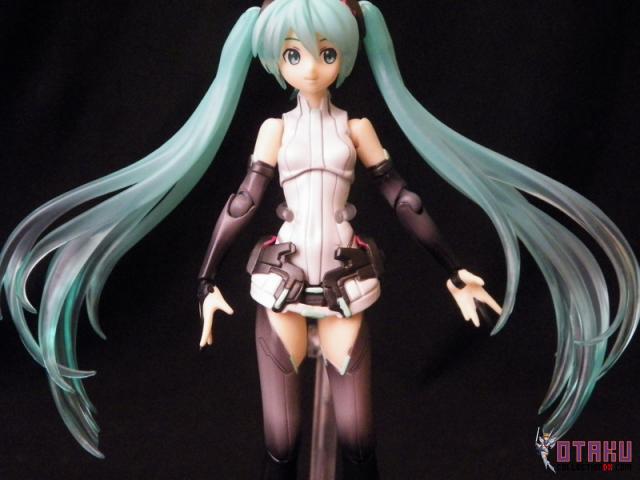 Here she is a little bit closer. Her hair takes up most of the frame, as it should. You can see the sincere, yet blank expression on her face, the expressive hands and micro skirt. You can also see the popped out right shoulder joint.

Let’s look at the hair. 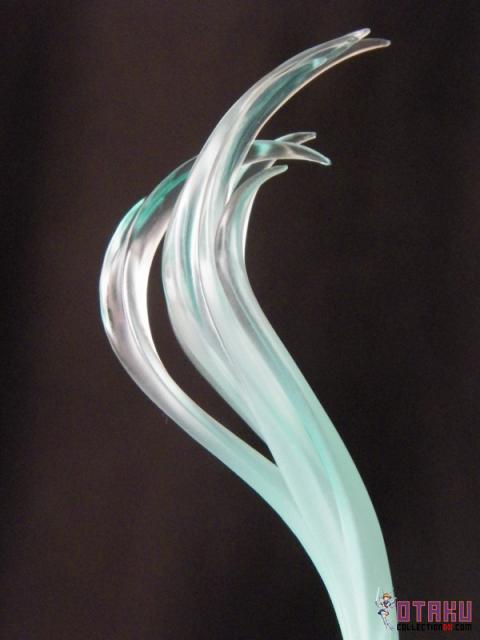 It almost looks like a sculpture of moving water. The hair on Miku is easily one of the finer features. 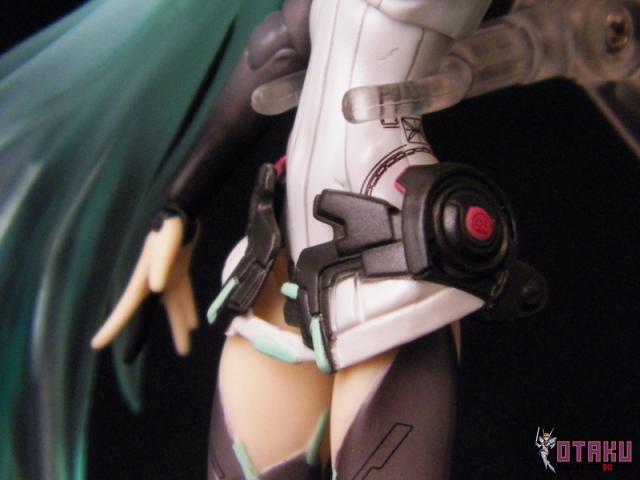 This is the first skirt she’s equipped with. It’s teeny-tiny, and a little techno looking. 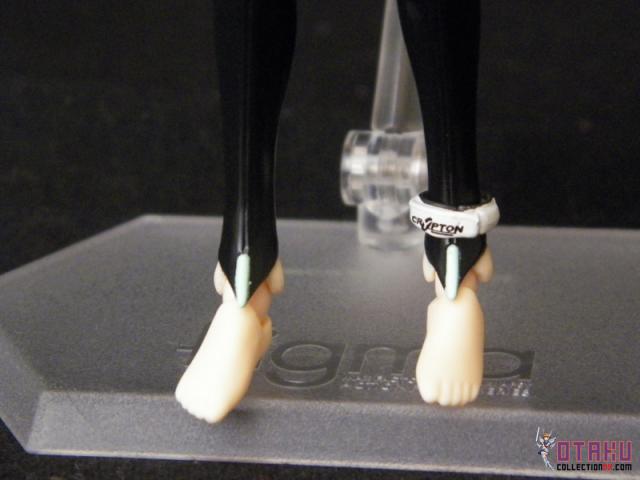 For those of you so inclined, her feet. 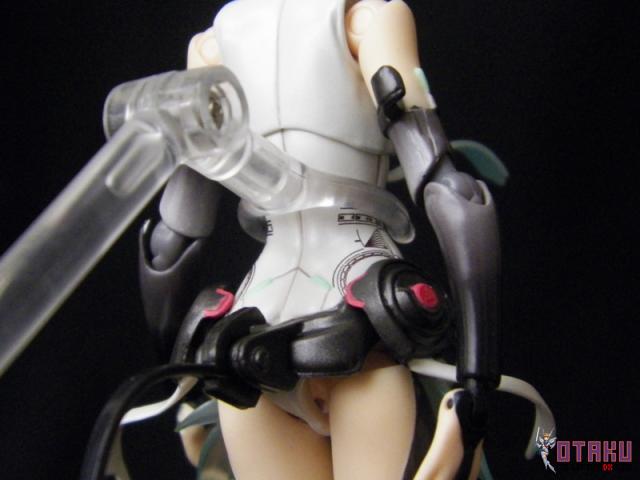 This is a curious shot; her joints in the crotch make for an… interesting(?) bathing suit line. It’s not the sexiest thing ever. Otherwise, you can see the print on her hips and waist, the way the belt sits low on her rear end and the wires coming off her belt.

Let’s play with some of her changes. 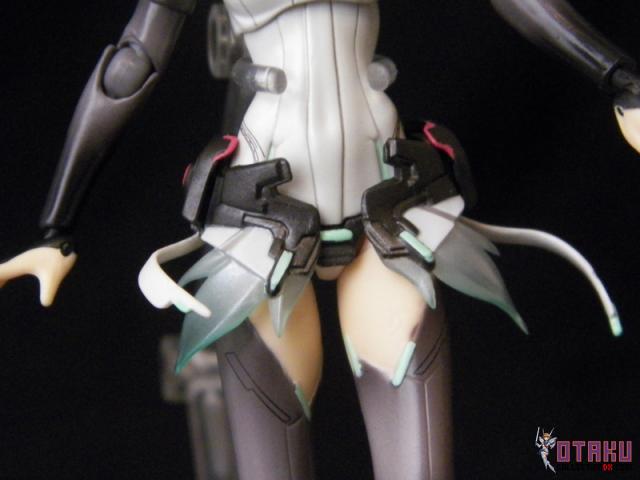 She sports a secondary skirt. It’s almost fairy-esque. The clear coloring calls back to the tips of her hair.

This is Miku’s second face. It’s meant to be sexy, but it looks a little sleepy. 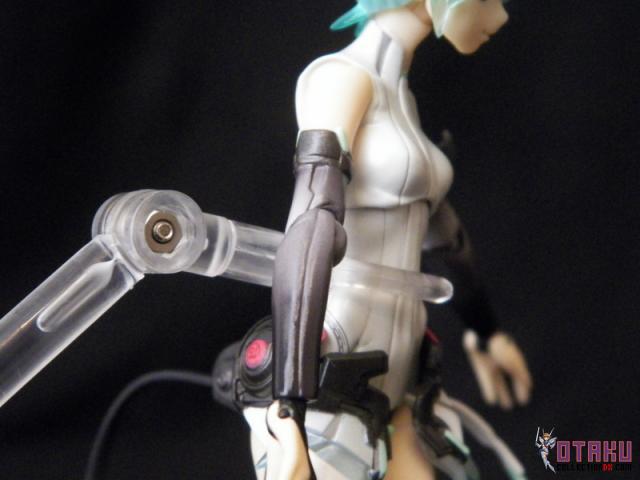 She has two different upper arm pieces. The first is straightforward, while the second features a popped open strap, exposing her Vocaloid number. 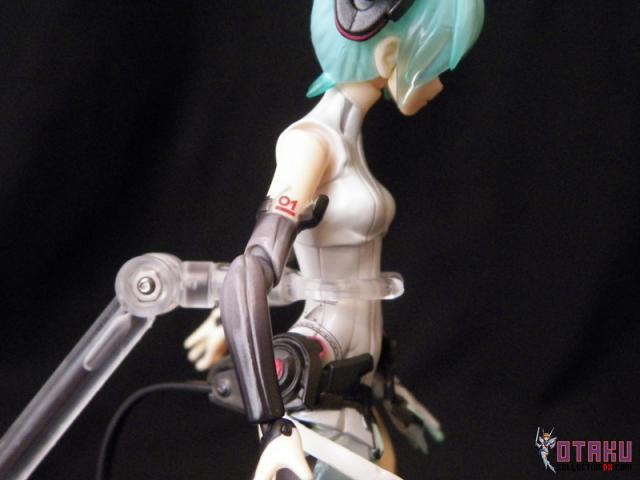 Miku has many poses, some intentional and some not. 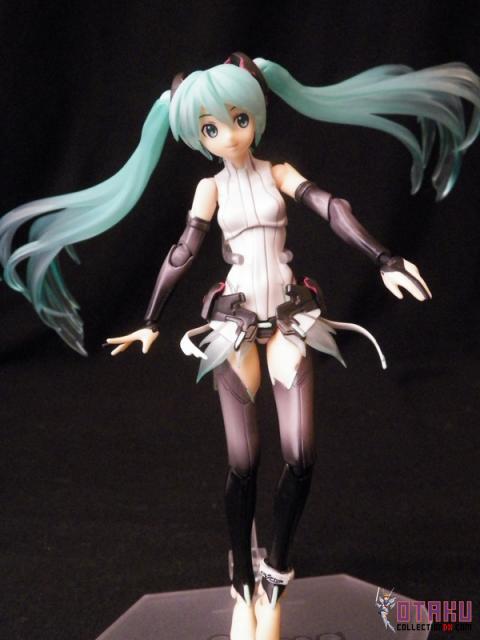 Of course, she can dance if she wants to. Miku has a cute little bop to her, very pop star. She looks sweet and happy. 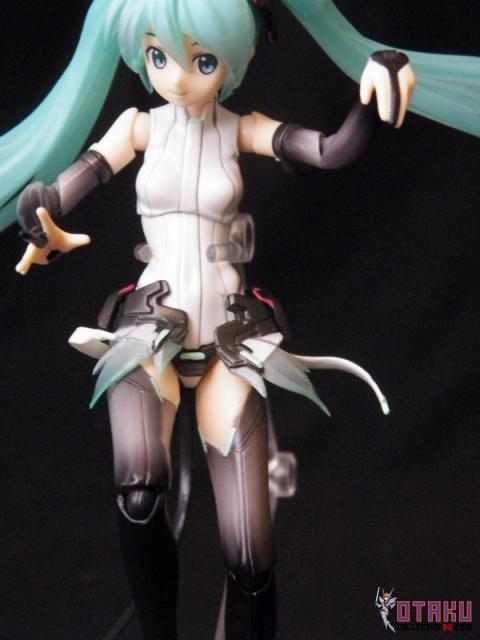 This is her best Lady Gaga monster dance. Possibly thriller. Or maybe she’s just sneaking up on someone. 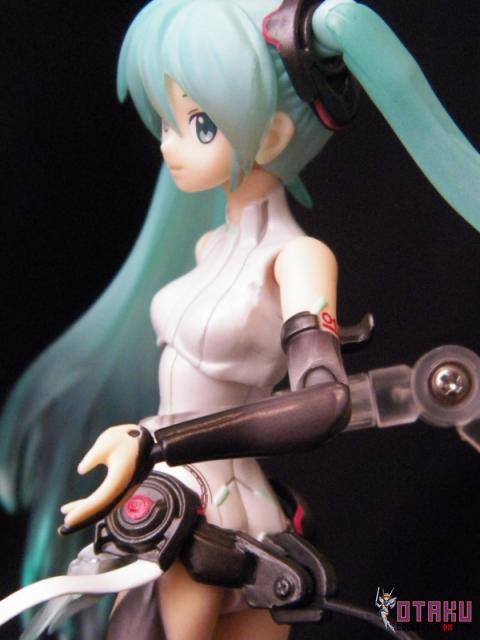 Over-the-shoulder, twisted back glance - perhaps she remembered something, or is turning to talk to someone. Miku’s torso - specifically, the articulation under her breasts, makes this possible. It also makes it possible to switch out the belly plate for the Append look. 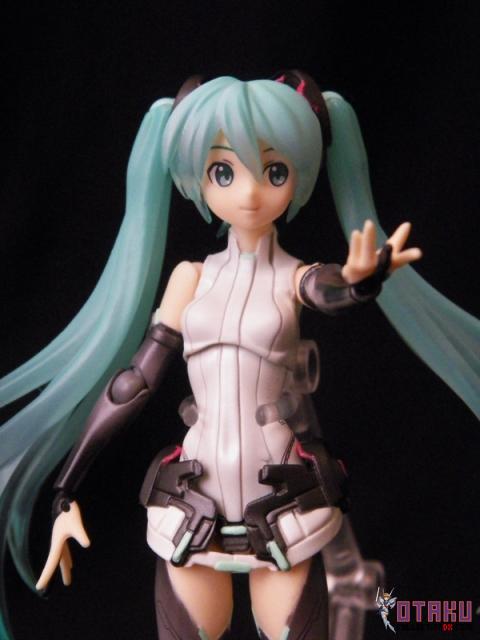 Who wouldn’t want to be on the receiving end of that reach?

And now, for the Append look. 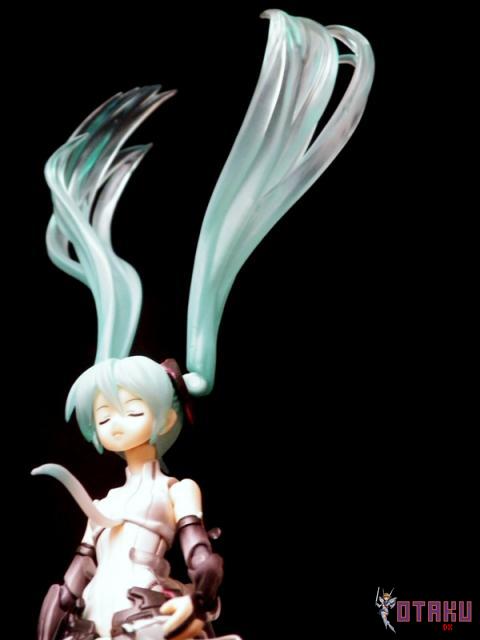 The hair is wild, tilted upward. Her eyes are closed, her hand down, her tie piece flying away. 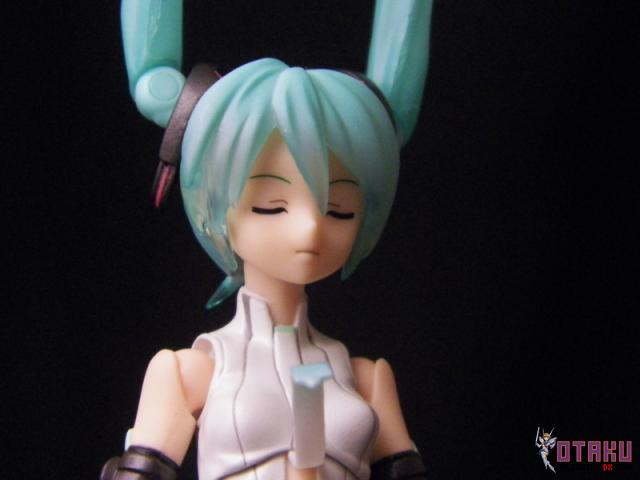 Here are the closed eyes. There is a distinct lack of emotion in this figma; in the other versions of Append Miku, she looks almost blissed out, heavily communing with the music in a way that is almost spiritual. She is the Madonna of J-Pop. Here, she merely has closed eyes. 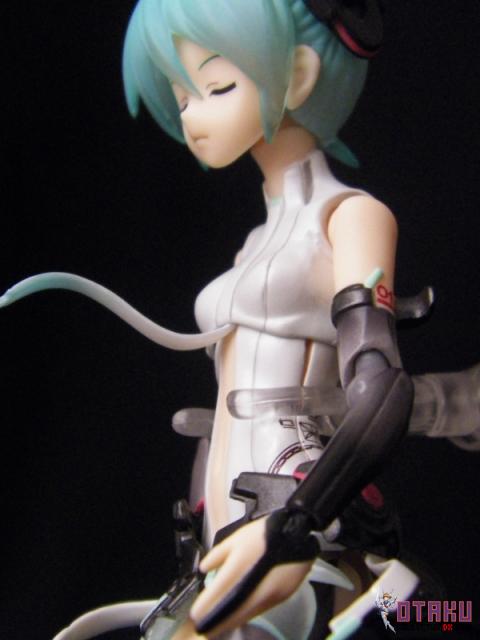 You can see a tiny crack of distance between the belly plate and the figure here. Her chin juts out. 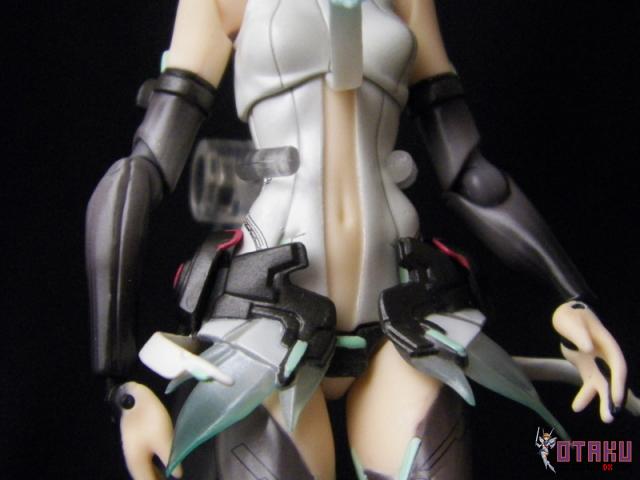 The belly sculpt, however, is remarkable. It’s a hint of naughty with a large dose of feminine. She is, above all, a pop star - and what is a pop star, even the oh-so-innocent seeming ones from Japan, without their sex appeal? In Append Miku, the sex is all in the bare strip of belly.

For the most part, Append Miku is just lacking that something that makes the other figures, and especially the art, so transcendent. There is so very little emotion here. She is lovely, naturally; it would take a lot of work to make her not lovely. But something is just not quite in place. The pieces fit together, but they are not more as a whole than a sum of parts. While playing with this figure, it was, in fact, the parts that held my interest. Together, though… well, she didn’t hold the same fascination that she usually does. Make no mistake, I love Miku, and this figma will proudly sit on display next to her Nendo counterpart. But she won’t be the first figure I point out to people, and I imagine I’ll play with her less than the others.