I have a real fondness for Gainax's Gunbuster, Aim for the Top!. The anime was top notch, and I dig the mecha design. I can't afford either of the excellent transforming Gunbuster toys, so I was excited for (yet still wary of) the Revoltech release.

I don't expect miracles from a smallish posing figure which also transforms. I more or less enjoyed the Revoltech Valkyrie, but Gunbuster is a different beast.

Gunbuster is packaged in a typical Revoltech window box. 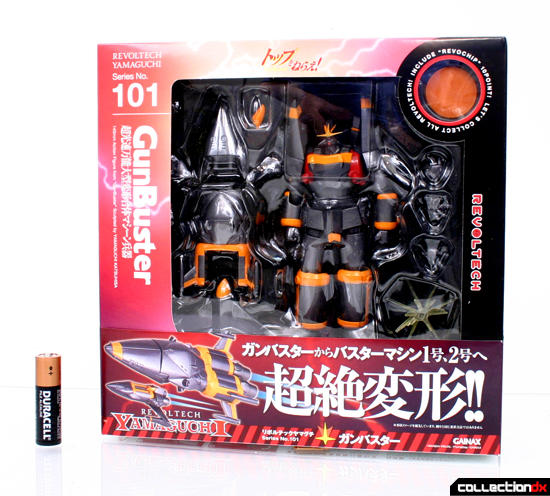 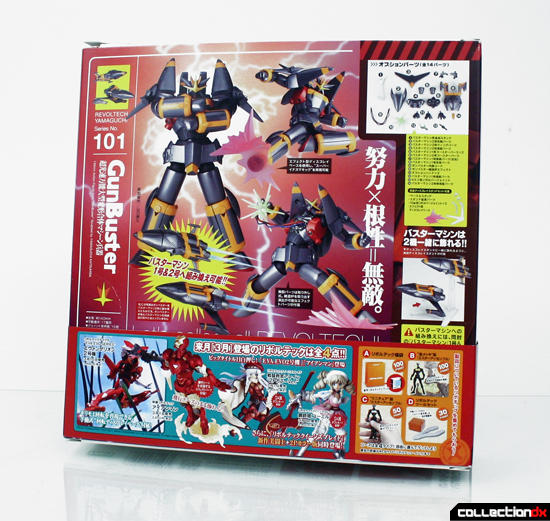 Inside, a suspicious number of extra parts. 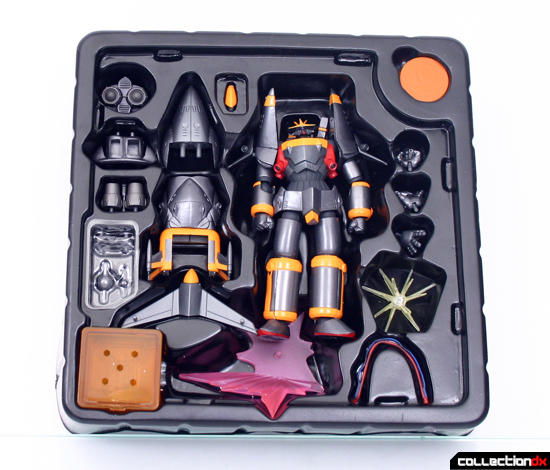 Out of the box, the base figure is fine, but just fine. Gunbuster won't stand on his own; the stand is entirely necessary. 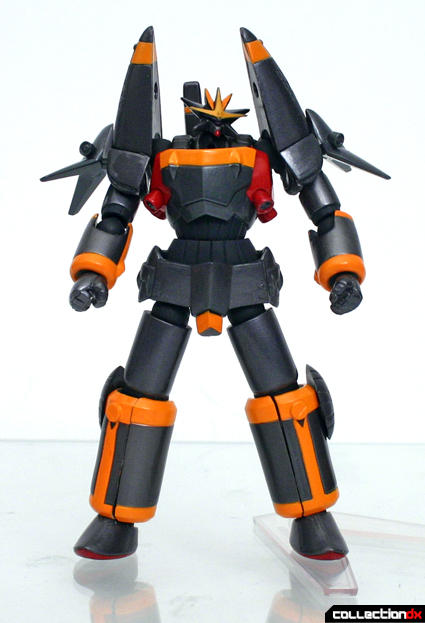 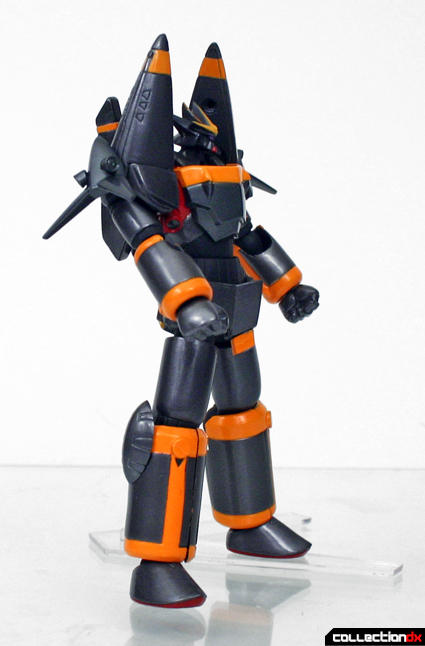 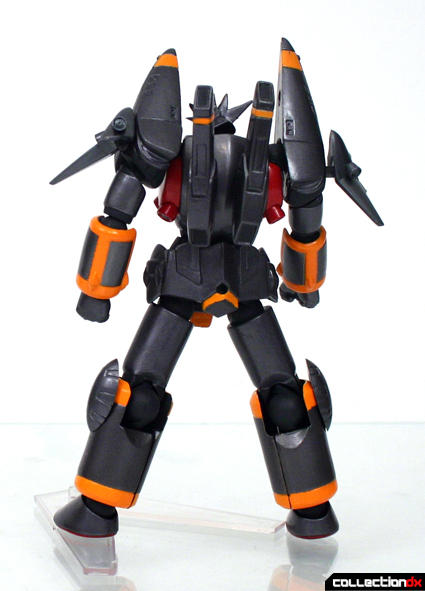 While Revoltech exists for posing, this figure is pretty limited. Gunbuster is bulky and inelegant. The articulation is merely adequate. 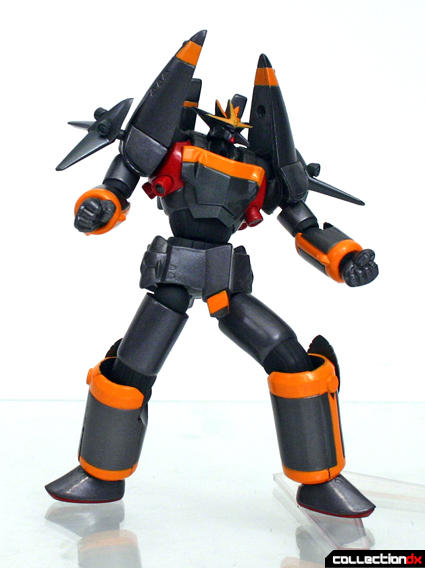 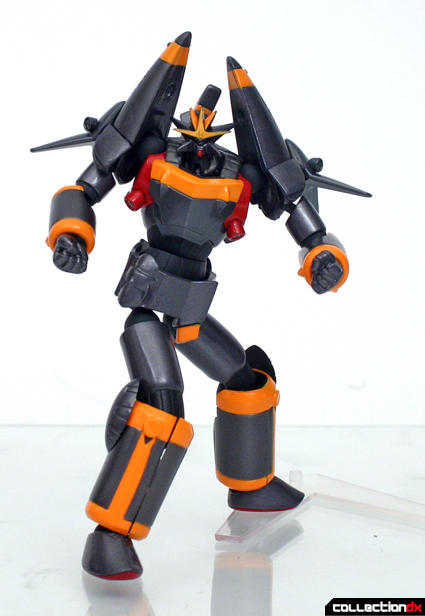 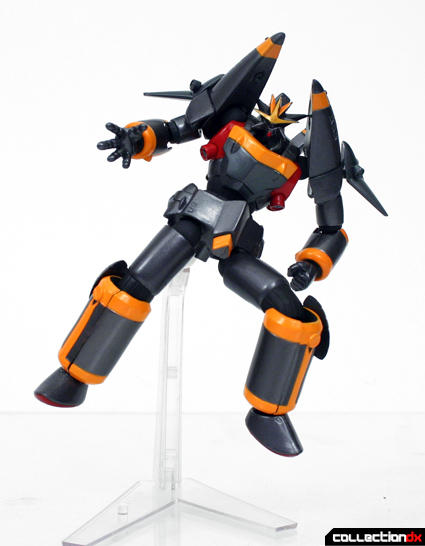 You can sorta recreate a few iconic Gunbuster poses. 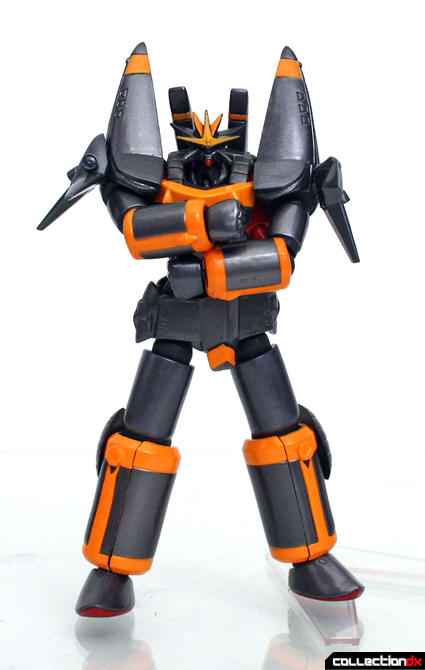 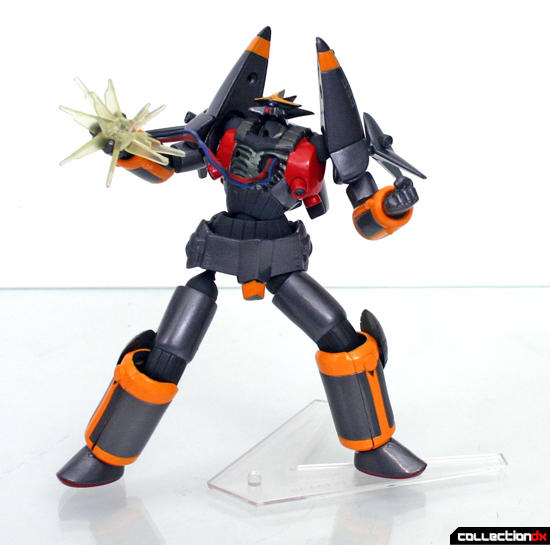 Even in its base form, assorted kibble falls off with the slightest movement. It really messes with the playability when you have to keep finding and replacing tiny pieces.

Things get complicated with the transformation, really complicated. Here's the amount of disassembly required. Can we really call this transformation at this point? I don't mind parts-forming, but his is a kibble-former. 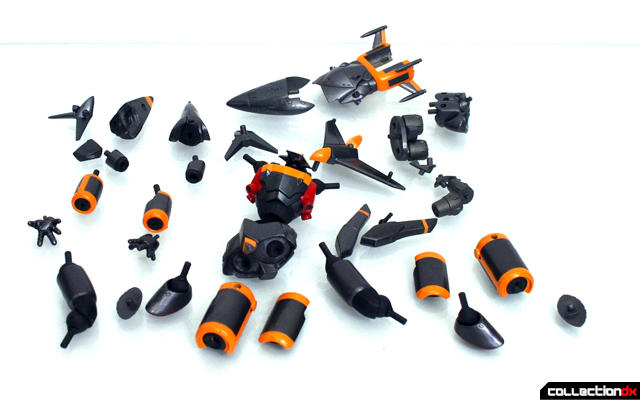 These bits combine in some fashion to form two ships. Ship one: 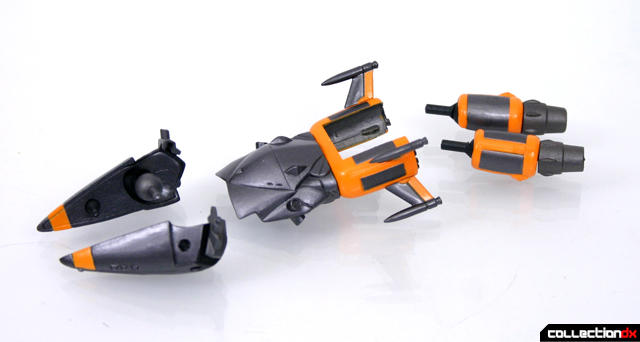 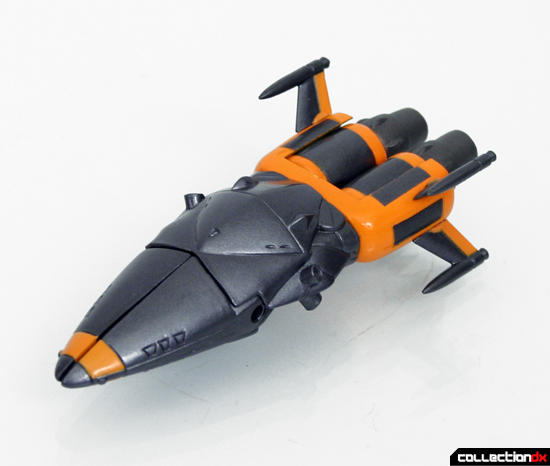 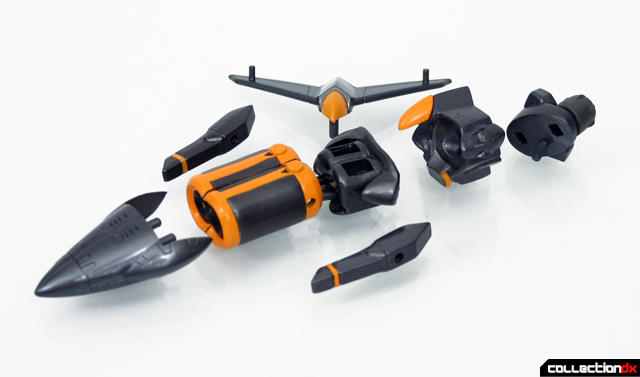 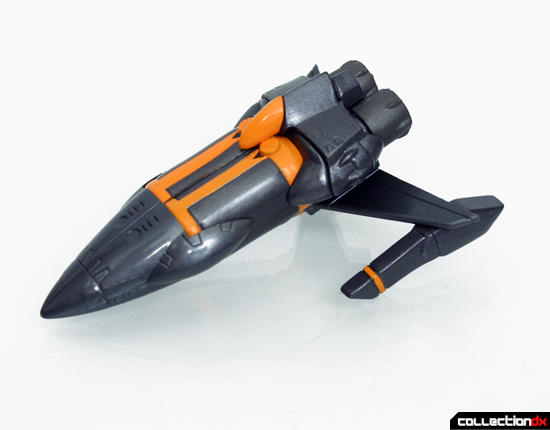 The ships both fit on the included stand, and look handsome enough. 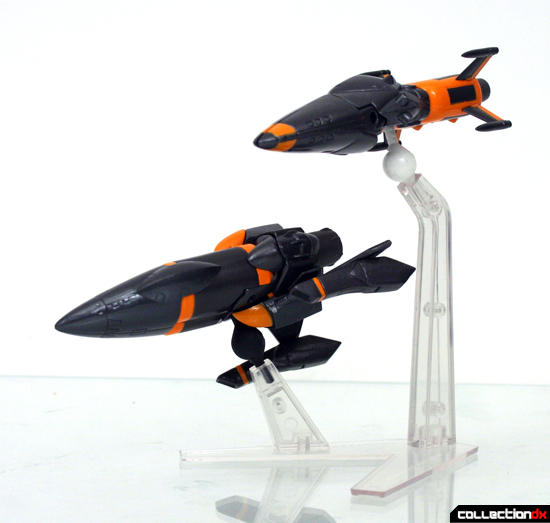 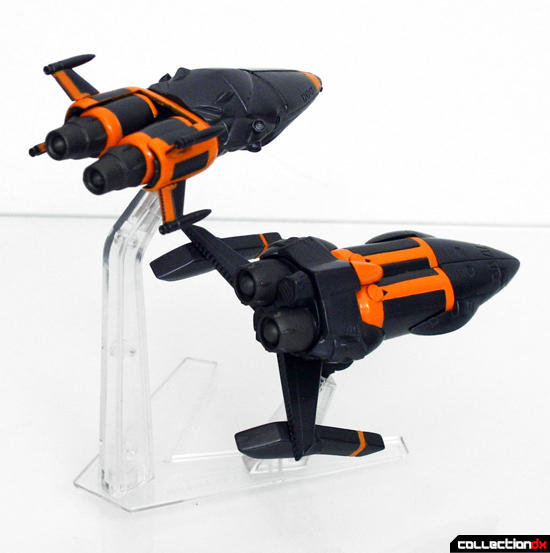 And here's what's left over: 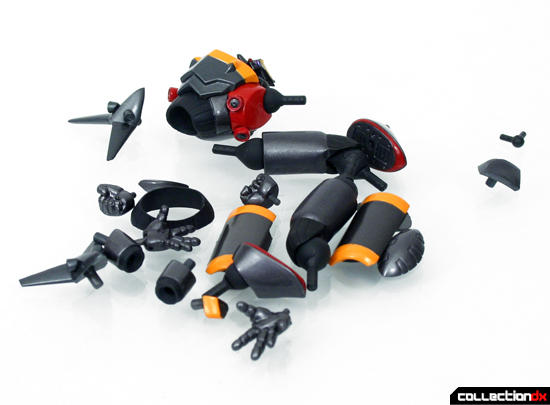 The worst feature of modern adult robot toys is the de-emphasis upon perfect transformation. I'd rather something hold together as an actual toy instead of maintaining some standard of line-art or anime accuracy. Gunbuster meets these standards but ends up not being any fun.

I guess if your happy to decide on a pose and stick with it... maybe it's worth owning?

And on another note:

Can anyone vouch for the OVA series? I've wanted to see it for years, but never got around to it.

Is it worth buying the box-set? My taste in anime revolves around series like Patlabor & Macross.

If you're a fan of Macross & Patlabor then you'll definitely like Gunbuster. The animation is gorgeous and the story is to notch to boot; it's a nice combination of serious mecha anime like Macross while at the same time the Gunbuster itself is a nice nod to old 70s style giant robot style anime like Mazinger and the like. And if you don't know it already but the character designs were done by Macross character designer Haruhiko Mikimoto.

Now that's what I wanted to hear.

Well, Gunbuster is only generally regarded as one of the finest OAVs, if not THE finest, of all time... :-)

Some of its effect might not be quite as impressive as it was at the time; "Evangelion", "Gurran Lagaan" and "Voices of a Distant Star" have all used elements of Gunbuster so if you've seen those some of the impact might be lost. Having said that, I didn't get Gunbuster on first viewing, it was only *after* seeing Evangelion and going back to it that I learnt to appreciate Gunbuster.

If you like Macross and Patlabor you'll probably love Gunbuster too.

Never say NEVER my friend. You'll never know these things might ever happen. Some funny old carpenter told me that line--thought I pass it along.

Haha, I remember that I complained about the suspicious omission of all of the melee weaponry when the press photos dropped. It would have probably doubled the size of the pile of plastic bits!

I decided to wait on buying the Revoltech Gunbuster until some reviews of the figure showed up on the Internet, specifically here. And after seeing that pile of leftover parts, man am glad I waited. Gunbuster is an awesome mecha, but that Revoltech figure is just sad.

I love gunbuster, but I'm not feeling this one.

The anime is just great.

And, for my money, anyone who feel s the craving for a Gunbuster toy has to go SOC.
That is , hands down, the best ever representation of the character, and coincidentally, the absolute masterpiece of the SOC line, with a PERFECT balance between accuracy, fun, accessories and heft.

I'm overly glad I got it when it came out, as I see it's a bit pricey these days, but, folks, saving up for the SOC will be the best collecting decision of your lifetime!!!!

Well, to tell you the truth, I didn't like the SOC at all. It is my least favorite SOC, right below the Xabungle. I got it when it was first released too. When I got it, I took it out of the box, put it together, left it displayed for about a week, boxed it again and put it somewhere in the closet. I just can't feel any love for it. The Revoltech is okay, but too small for my taste. If they would've made it the same size as the old Kaiyodo figure, it would've been a lot better. The Gunbuster OVA is not on my favorites list. It is not too bad of a story, but it gets boring very quickly. As far, as the Gunbuster 2 OVA, I have not been able to get past the first episode. Good Lord it is dumb. I may have to watch the ending to see if I can muster any interest to watch the rest of the episodes.

...I, for one, hearthily despise revoltechs (especially representing mechas) and almost anything that is not SOC (vintage stuff excluded).

(BTW, I got a a sneaky suspicion our tastes are really different, as I do love the Xabungle series & related Toys ;) )

Gunbuster 2, never seen that, and not planning to do so...