S.H. Figuarts tended to lean towards Kamen Rider figures and various Shonen heroes, but did not touch Sentai characters. It wasn't until this year with the release of the 2009 series Samurai Sentai Shinkenger S.H. Figuarts that Sentai characters were given this sort of super poseable collectible treatment. With every new Super Sentai show that airs, a huge load of toys and merchandise come with it. The most recent show, Kaizoku Sentai Gokaiger is no exception to this rule, and features the first time that a Super Sentai show has an S.H. Figuarts release while the show is still running. Gokai Red is the leader of the Gokaigers, and the first Gokaiger to get the S.H. Figuarts treatment.

I'm not one to usually discuss packaging, but I have to admit that Gokai Red's packaging is really nice. The shiny red really helps make the front of the package pop, and the sides of the box are done in a really nice matte finish with gold lettering. The golden Gokaiger symbol is a nice touch too. 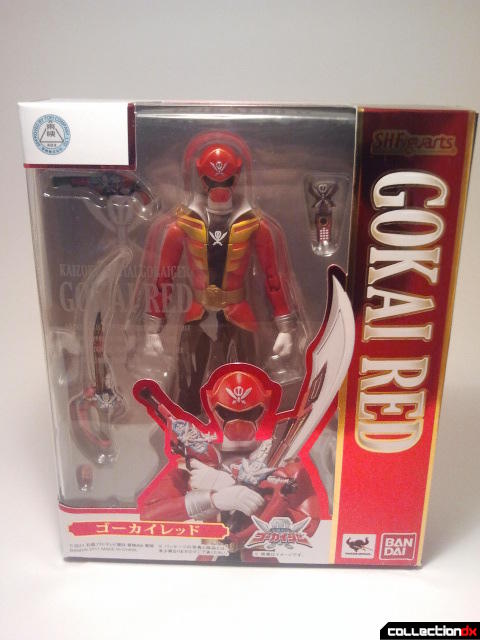 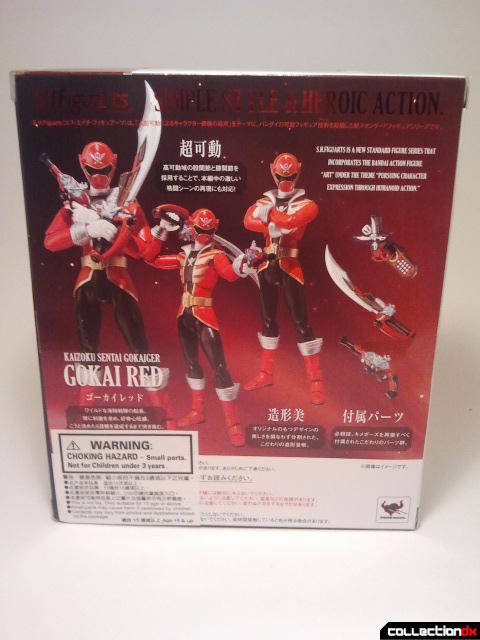 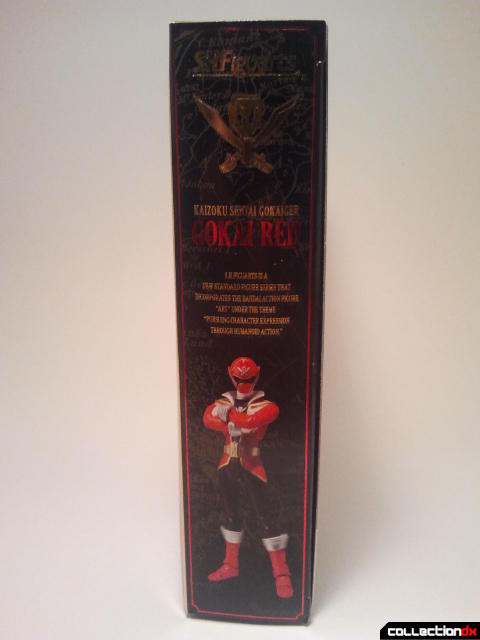 Gokai Red looks pretty good right out of the box. Because the designs for Sentai suits are much more slender and slicker than Kamen Rider suits, the figure is less thick. Although not in a bad way; I think the figure looks very accurate to what a man in a suit would actually look like. 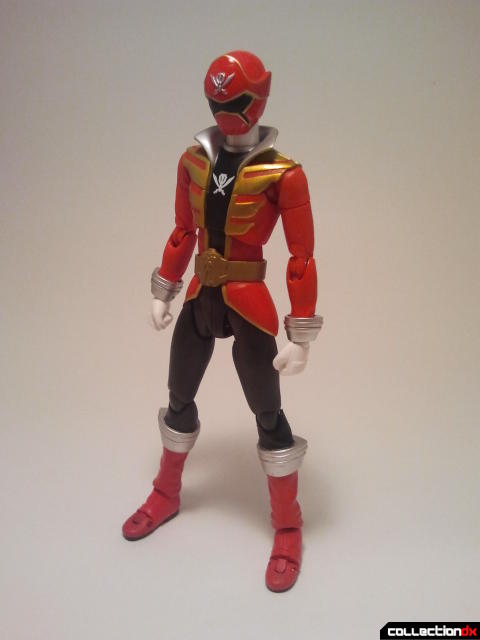 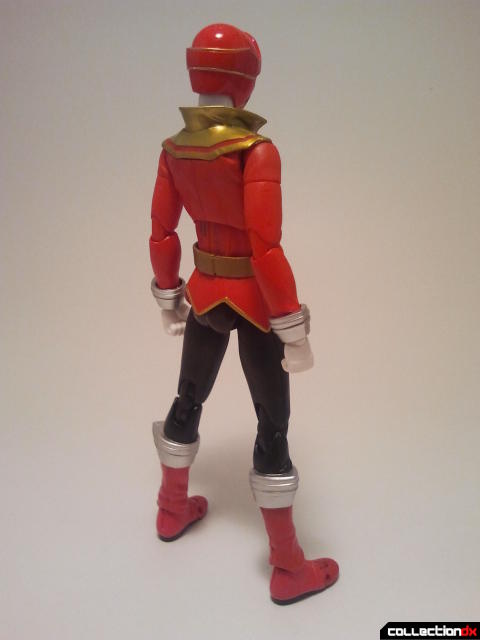 The majority of the figure is made in a softer matte finish to mimic how the suits are actually made out of latex and rubbery materials. The only piece that is not done in this style is the helmet, which is much shinier style to match how the helmets appear in real life. 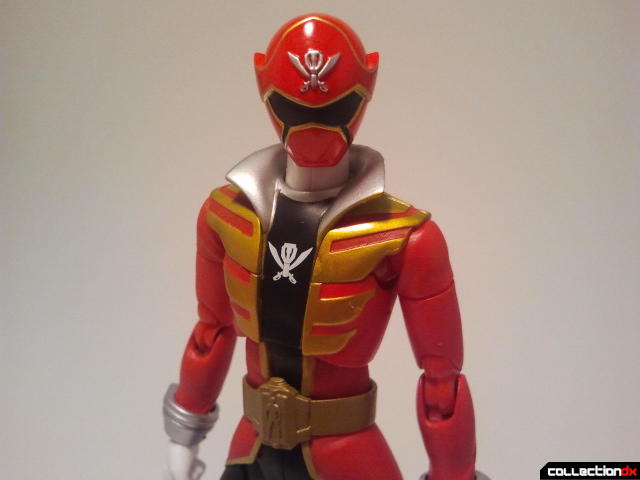 The articulation on Gokai Red is pretty standard for S.H. Figuarts. Although Gokai Red does not have die-cast feet, and only has the much more limited ball-jointed feet, I am much more forgiving of it for a more minimalistic design like Gokai Red. 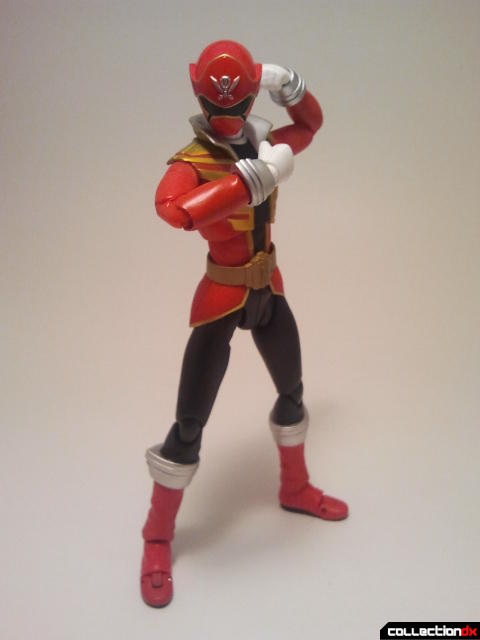 Gokai Red also has a really great range of motion on his neck, so he can really look down at you, or tilt his head in a cocky way. 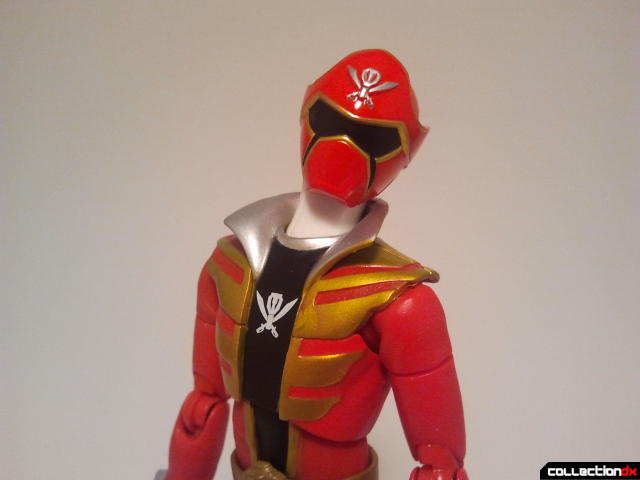 Gokai Red comes with a whole whack of accessories, including FIVE pairs of haves and one pointing hand. The first accessory to cover is his sword: the Gokai Saber. The detail on this tiny sword is gorgeous and all of the paint details are excellent. It's also super sharp as well. 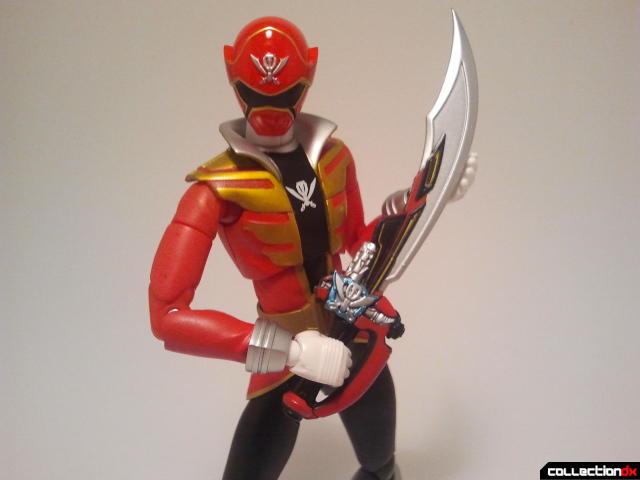 In addition to the Gokai Saber, each Gokaiger is also equipped with a flintlock pistol known as the Gokai Gun. Gokai Red can hold the gun with either hand using a pair of hands with their trigger fingers extended. The detailing and patterns compliment the Gokai Saber very well, and the two look best together when Gokai Red is dual-wielding them. 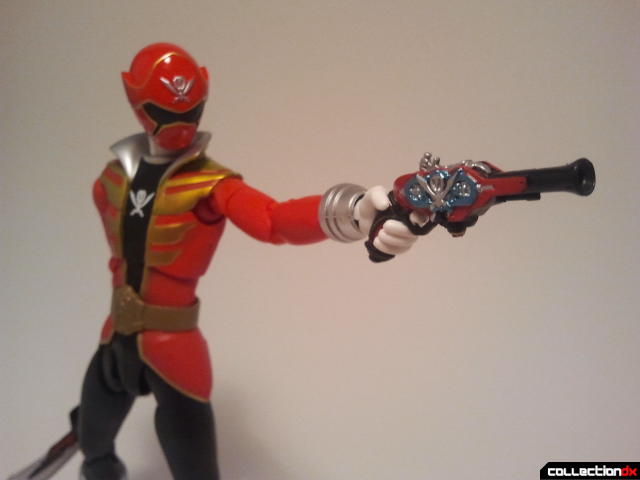 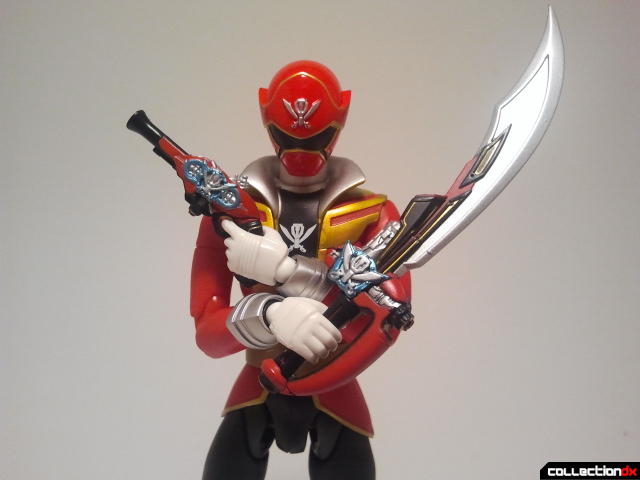 That's not all that Gokai Red has to offer with his weapons though. Each of the weapons features a tiny silver cylinder that can move up and down. In the show, the Gokaigers insert their Ranger Keys into the cylinders to do their big final attack. Since a tiny little key that could fit into the cylinder would be a little crazy, Bandai has included two alternate cylinders with the Randers Keys molded into the chamber. These are really hard to pull out, so I didn't bother with the gimmick after getting it into the Gokai Gun just this once. 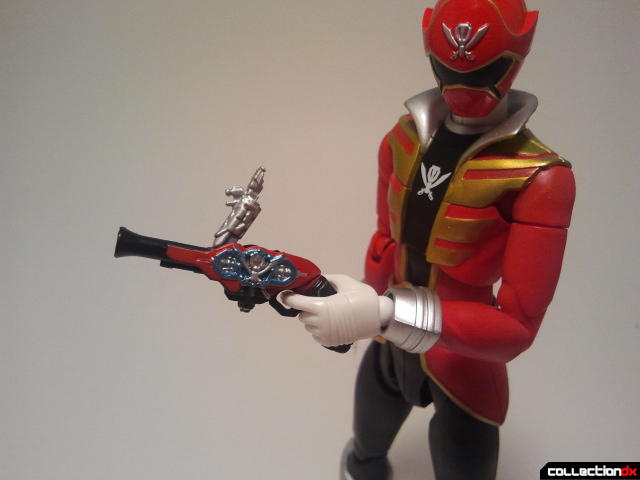 Gokai Red comes with another very awesome accessory: the Mobirates! This cell-phone is the transformation device that the Gokaigers use to turn into the Gokaigers, along with the various other Sentai teams. All of the buttons and details are painted on very well despite its size. 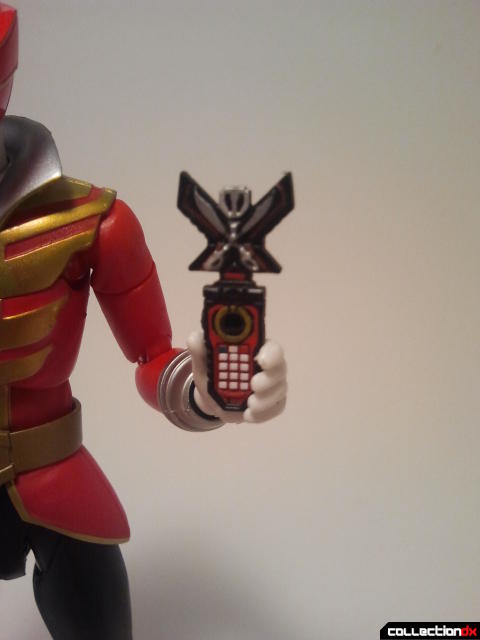 To go with the Mobirates, a tiny little Gokai Red Ranger Key is also included. Even though this piece is so small, the helmet details and suit sculpting is still all present. Another Ranger Key is included, but this one is in its “key” mode. Then the tiny key can be placed into the Mobirates so that Gokai Red can change forms. It's an insanely tiny gimmick and a very awesome feature for this toy. 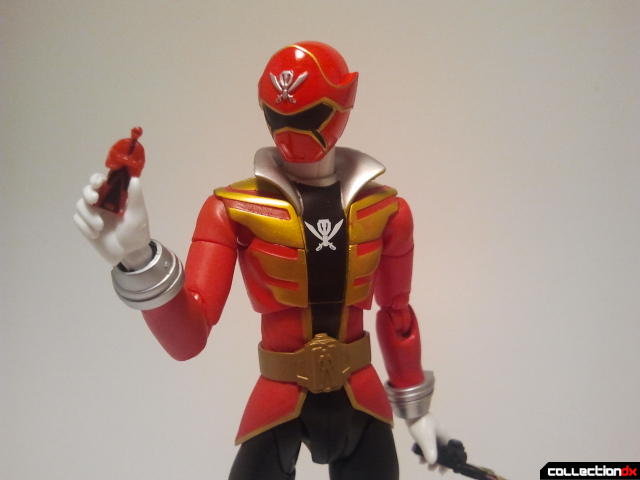 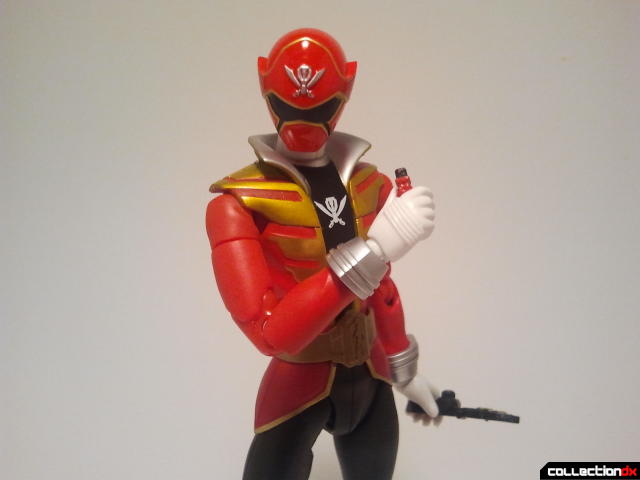 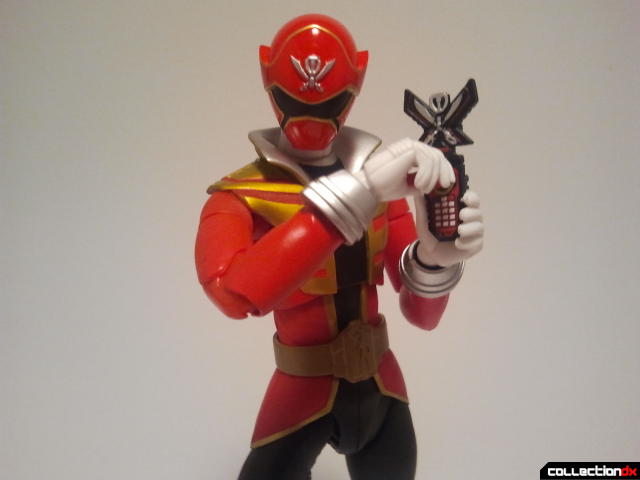 There is one more accessory included with Gokai Red, and it's also my favorite. Gokai Red comes with an alternate set of arms that are molded specifically so that he can cross his arms and look smugly at you. The arms simply pop right off at their bicep swivels and these arms fit in easily. The end result really is awesome. 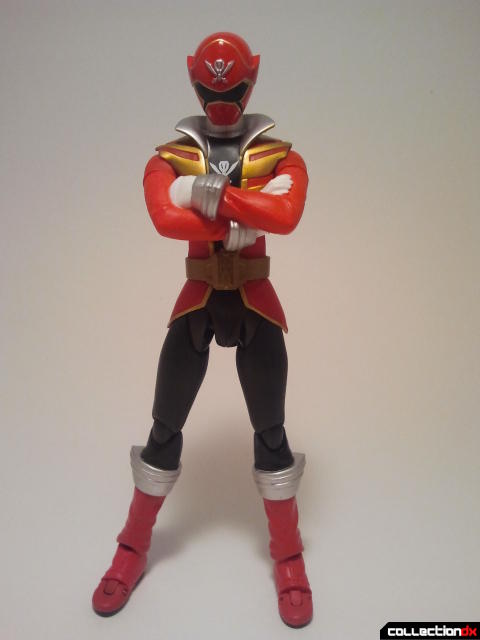 Unfortunately, the arms are painted in a red that's just a little bit off from the actual red plastic. It still looks pretty good though, and from far away it's barely noticeable. 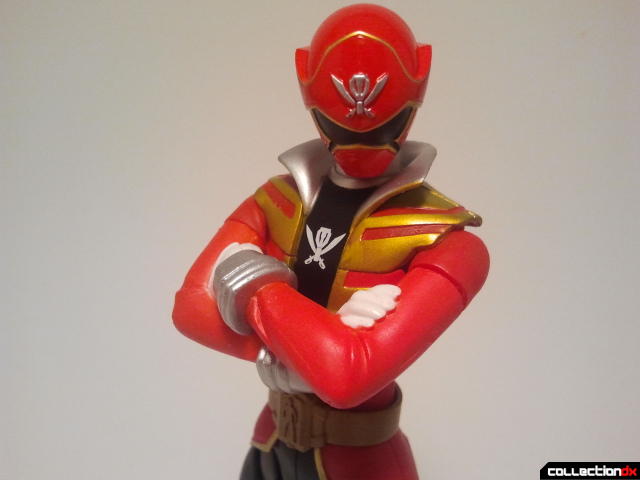 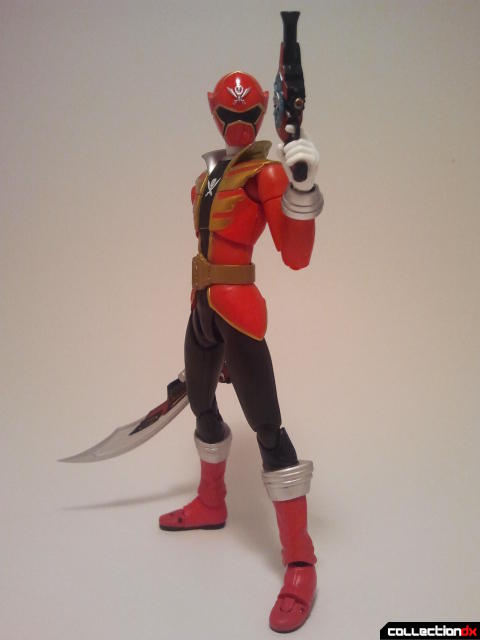 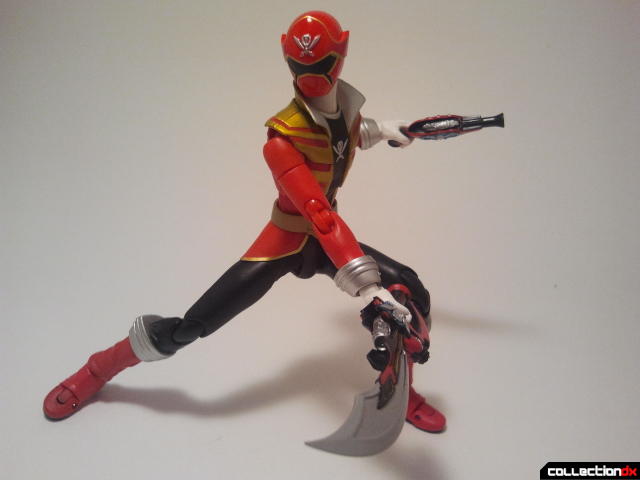 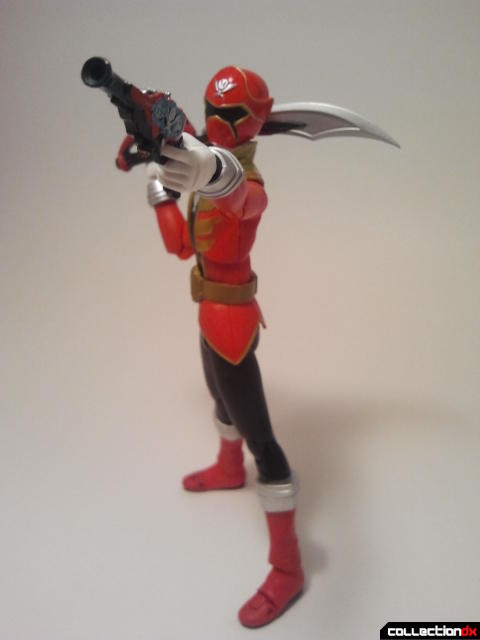 Gokai Red is a fantastic action figure and a great representation of the leader of the Gokaigers. The articulation is excellent, and the accessory load out is near perfect. I can't think of anything else this Figuart would need to come with, and it really is a great Figuart. If you love Gokaiger, or if you even just think pirates are kind of cool, definitely check out Gokai Red. He will not disappoint. 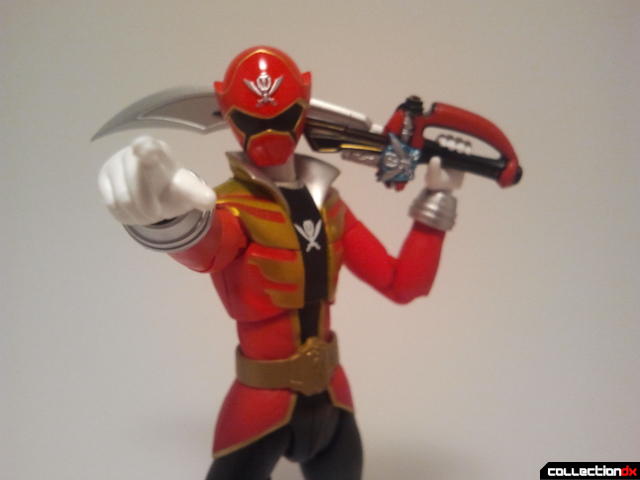 3 comments posted
Great review. He has a lot of

Great review. He has a lot of cool extras.
I need to stop buying other stuff , so that I can pick him up! I was disappointed with the fact that the girls are gonna be web exclusives. Bandai has once again dashed my dream of having complete SH Figurts Sentai.

Man, there are so many toys that would be improved with a pair of folded arms!

I can't believe you didn't do the cocked head pose WITH the crossed arms!!