EVA_Unit_4A has reviewed several of the mecha in this line:

Today we are taking a look at the FuraiMaru, which is the Hurricangers’ Grand Power.

This toy comes packed in several pieces. The body, arms, legs and the pinwheel weapon. 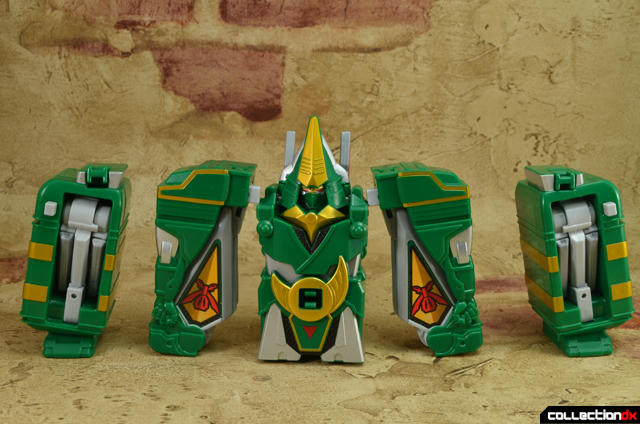 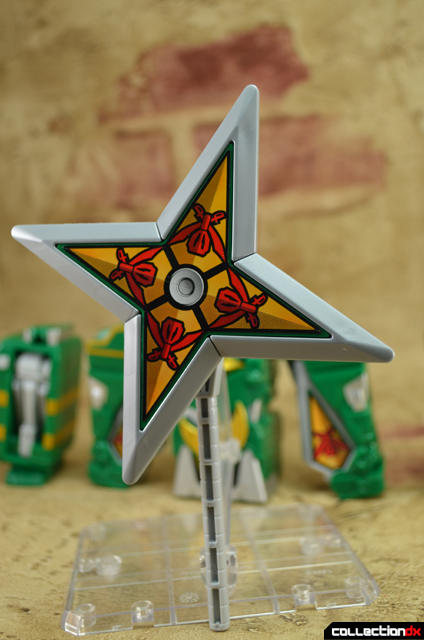 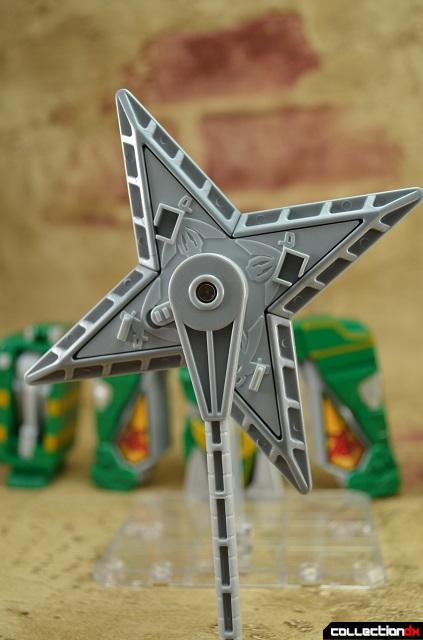 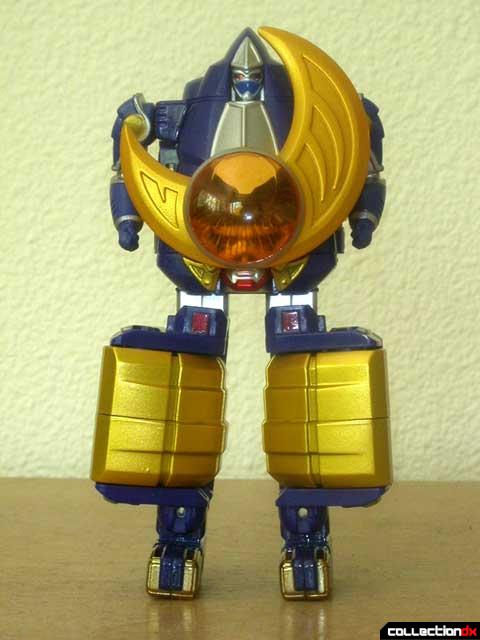 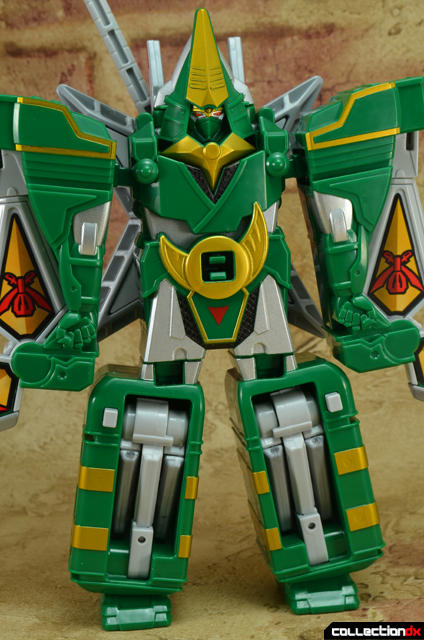 As you can see, the new FuraiMaru trades in the blue paint of the original a greener color scheme. The new FuraiMaru is also much beefier looking and has better proportions than its previous form. However, there is enough of a resemblance to its previous appearance in Super Sentai history that you can tell where the design came from. 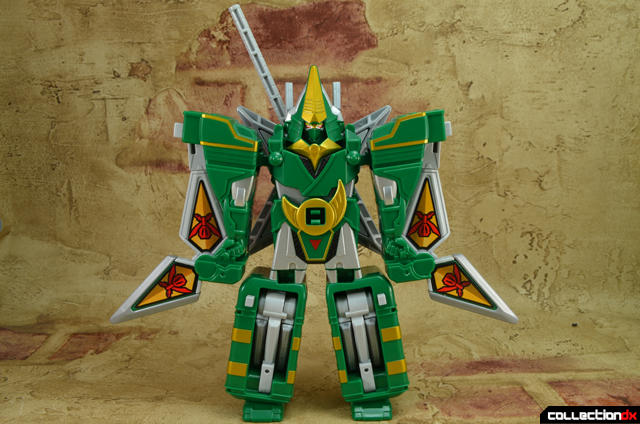 The articulation on FuraiMaru is very limited. You can move the arms up at the shoulders. You can also move the shoulders in a bit. This is due to the fact that the shoulder pegs hide in the body of the toy when it combines with the Gokaiger's main mecha. 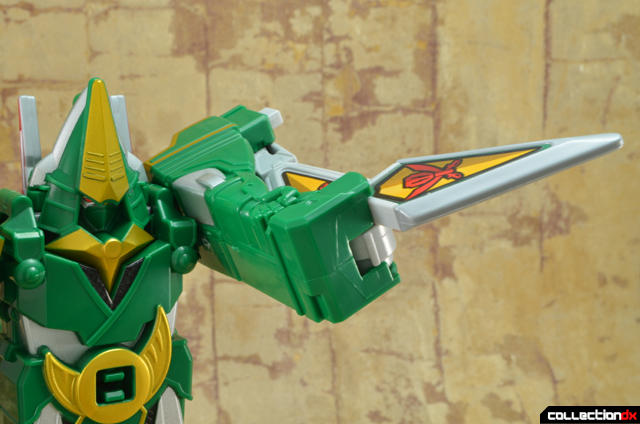 While the Furaimaru's articulation is limited, it is a pretty well armed toy. 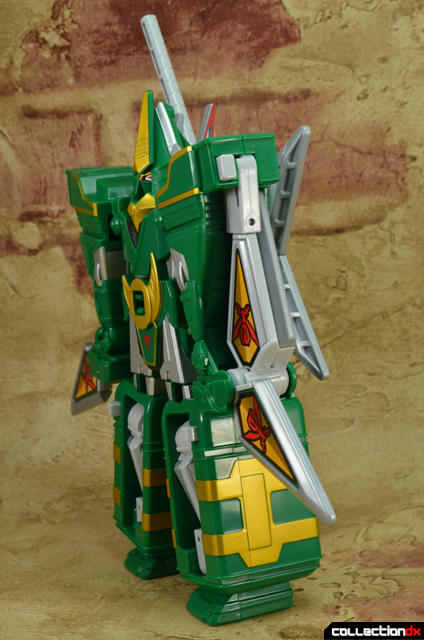 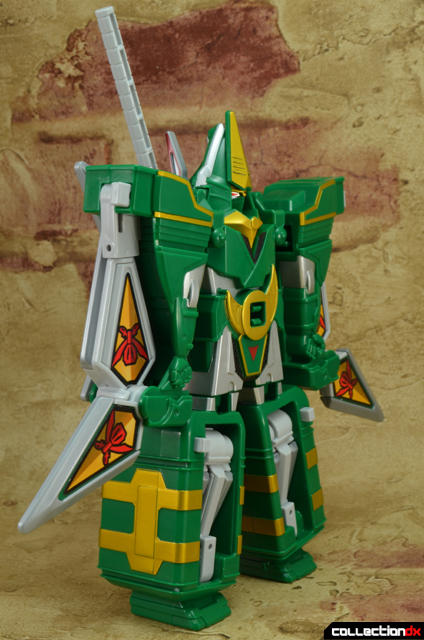 It holds several blades in each hand and has the pinwheel shuriken on its back. 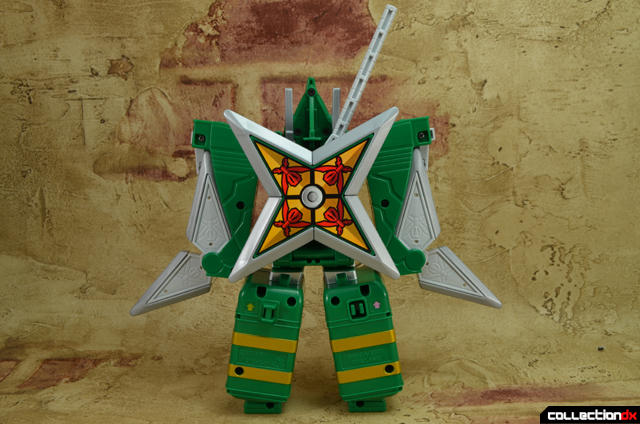 Hidden in each of the legs is another set of blades that can be released by pressing the grey buttons on the top of each leg. 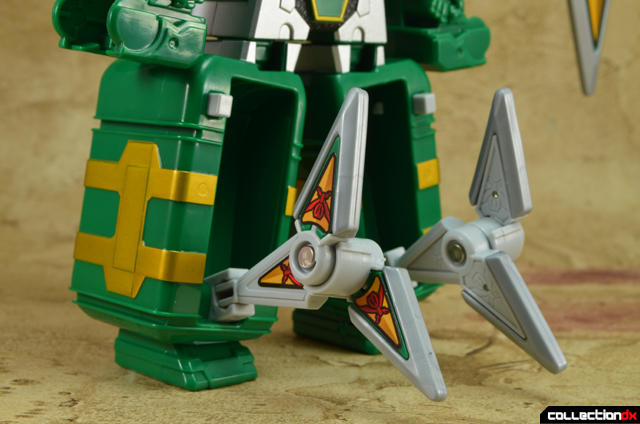 The shoulders also have buttons to release the blades pm the sides of the arms. 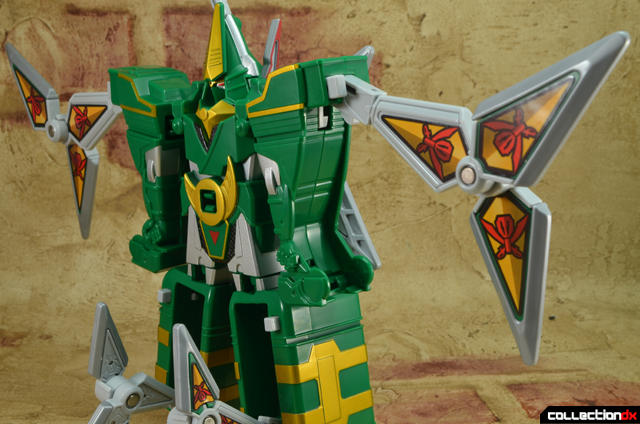 These spring-loaded weapons are pretty darn fun to play with. 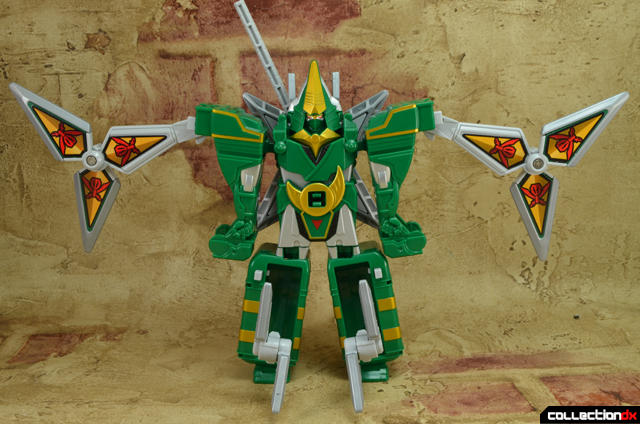 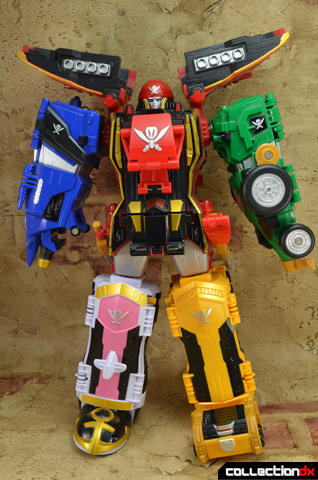 You can't even tell that the Gokai-Oh is hiding another mecha within it! 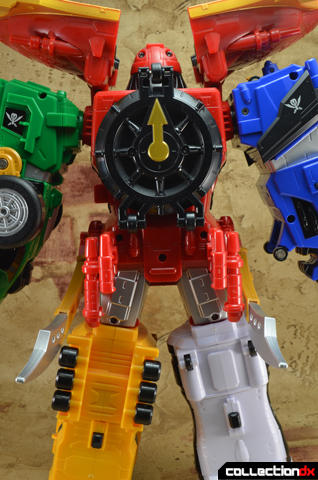 Then when you turn the wheel at the rear of the Gokai-Oh, the auxiliary mecha, in this case FuraiMaru, would pop out and display its weapons. 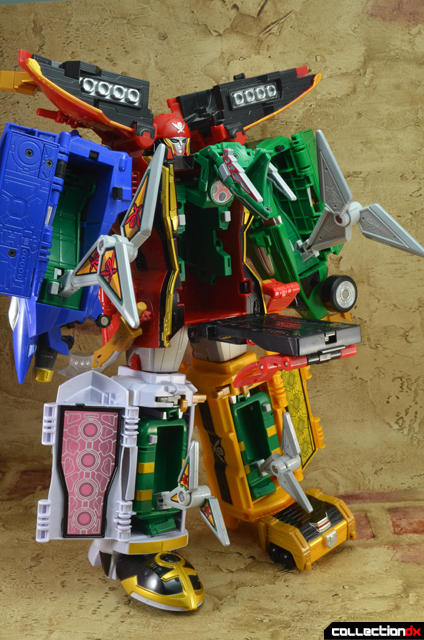 When the blades extend out of the appendages of the Gokai-Oh, they form shuriken, in the same way that they pop out of the standalone FuraiMaru.  Out of the chest, a new helmet appears for the Gokai-Oh.The piece that houses the helmet is the body of Furaimaru. This is likely a nod to the fact that ther was also a helmet within the orginial FuraiMaru's body.

The newly-emerging helmet does not automatically attach to the head of the Gokai-Oh. But no worries, you simply have to attach the helmet’s peg to the connection point that would normally hold the Goka-Oh’s pirate hat. Then you simply extend the red and grey panels at the side of the helmet. 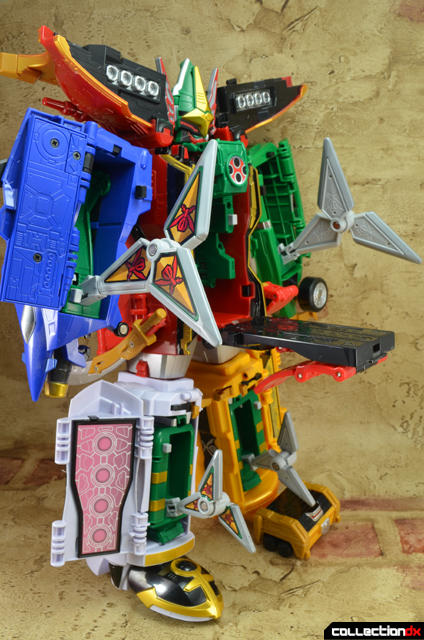 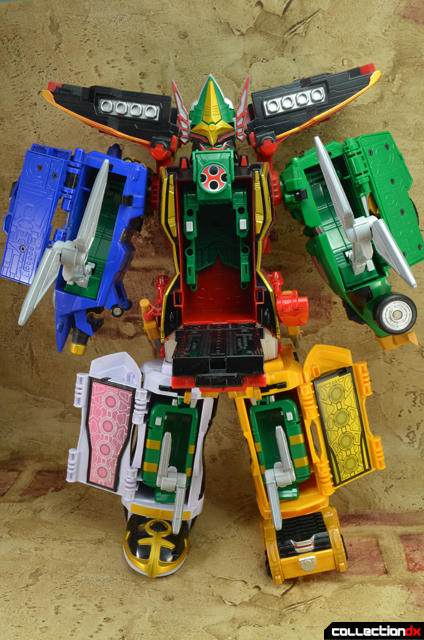 Besides have shuriken coming out of its appendages, the Gokai-oh can also hold the pinwheel shuriken. 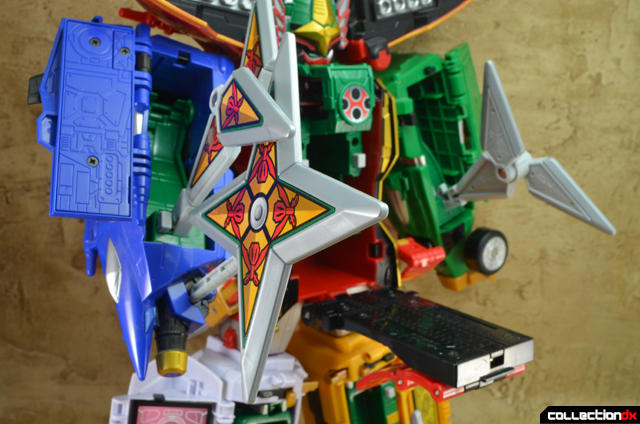 However, having the shuriken extending out of the arm and the pinwheel in the hand makes for a cluttered arm. So I will put the shuriken back into the arm so that we can check out the spinning action of the pinwheel shuriken.

The Gokaiger logo along with the yellow, black and green of the pinwheel create a nice pattern as the pinwheel turns. 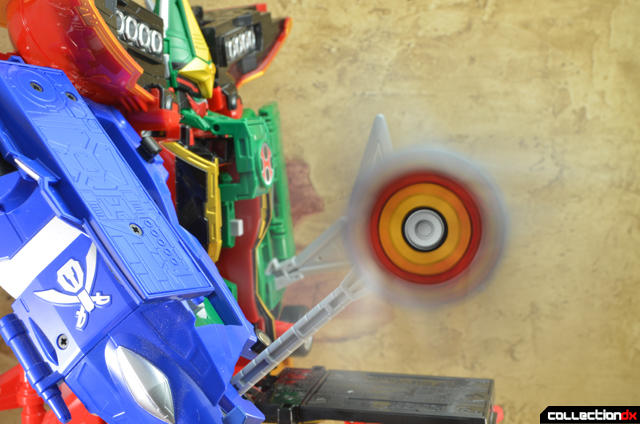 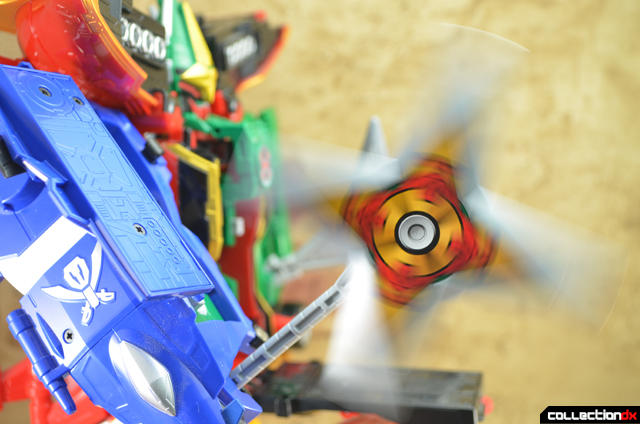 When the FuraiMaru combines with the Gokai-Oh, the combination is known as the Hurricane Gokai-Oh; which is a nod to the fact that the Hurricangers provided the Gokaiger with the means of producing this combination.

Since this is Bandai of Asia release of the FuraiMaru, you do get a nice extra that did not come with the Japanese version. That is a Ranger Key of Hurricane Red. 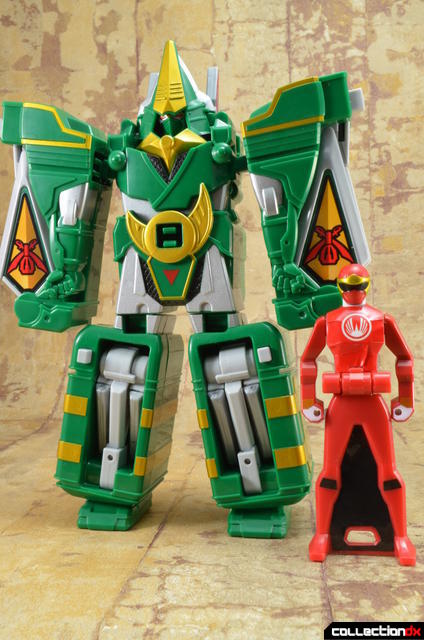 It is a gashapon key, which you would normally get from a vending machine. 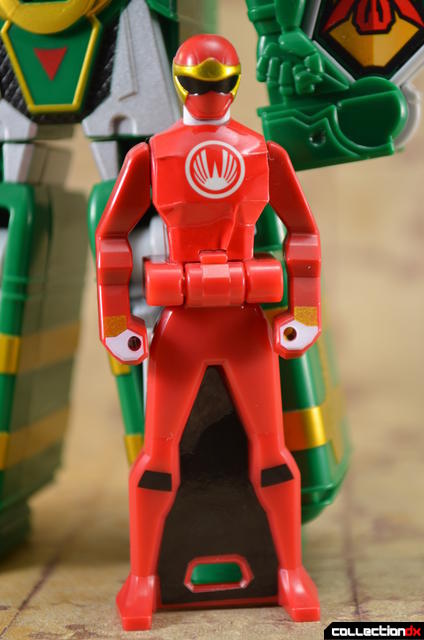 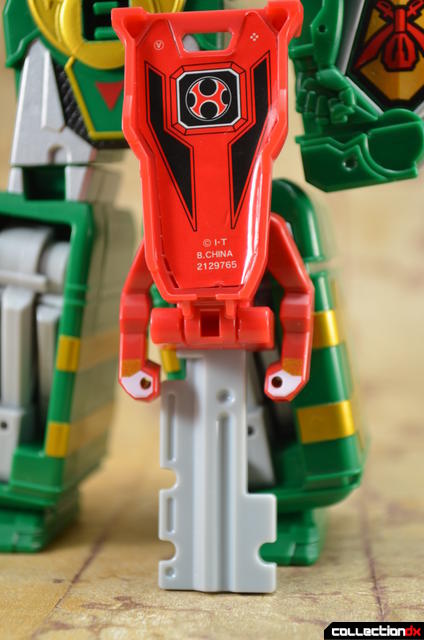 This key come in 3 pieces, which need assembly and sticker application in order to be competed. I am not a big fan of putting stickers on things, as I often do not get them on exactly right. But a free Ranger Key is a free Ranger Key after all, and that is always a plus.

Besides the bonus key, there are only a couple of slight difference that I found between this version and the Bandai of Japan release of the FuraiMaru. With this release the instructions sheets also have English translations on them.  The box is also slightly different and does feature some English on it. 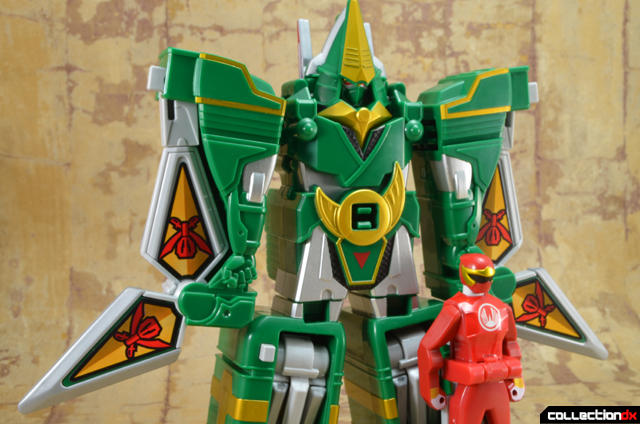 So this is a great purchase for those who missed out on the Bandai of Japan release of the FuraiMaru. It is a fun little toy that will enhance the fun you have with your Gokai-Oh.

10 comments posted
The best add-on with the worst toys

Furaimaru was amazing on Gokaiger. There was one very cool episode (#27, I think) where the team used him to cloak their ship, a rare case of a team actually using a support mech to do something other than combine with the main mech.

Sadly, the unfolding gimmick has made it impossible to turn Furaimaru into a decent toy. The chest symbol in add-on mode always ends up being tiny, even on the candy toy. The Super Megaforce version sort of corrects it... but the rest of the toy looks awful. Furaimaru deserves better.

I was looking for some Super Sentai stuff and I found them for really cheap on the ToySource, but the prices seemed to good to be true. Is it reliable? I'm thinking about getting the Mobirates.

ToySource is a very reliable site. I have ordered from the several times. I have had no issues and their shipping is super-quick.

The prices for their Super Sentai stuff are amazing! Just keep in mind that it is the Bandai Asia products. I bought the FuraiMaru, the Gojyujin and the Gao Lion. The FuraiMaru and the Gojyujin are identical to the Bandai of Japan release. I have not yet opened the Gao Lion, but I assume that it is also the same as the BoJ version. You get a free key with each one. Gojyujin comes with the anchor key and Gao Lion comes with Gao Red.

ToySource is run by the same guys as TFSource; it's intended as a way to get all your pre-orders from all lines in one place while using TFSource as a Transformers store to stock older items and buy from collectors. At least I think that's the reasoning behind it. Either way, I've never had problems with either site.

I agree with Atom Smasher. It's a great looking toy that stands alone but the combination is lacking. Just a huge whole in Hurricane Gokai-Oh's torso and the Hurricanger symbol isn't as large as it appears on the show in any iteration of this figure.

Also thanks for the link to Toy source. The best price I could find for a Gojyujin so now my Gokaiger series is complete.

No prob! I am also using ToySource to fill in the gaps in my Gokaiger collection.

If only someone like Dr. Wu could pop up for Sentai and Kamen Rider fans... wouldn't a custom chest plate for Hurricane Gokai-Oh be great?

That is a pretty great idea. I think the adult collectors would love to have that option. But I wonder if the demand would be high enough so that the products could be made affordable enough. The third party Saint Seiya pieces that are made to fix the inaccuracies of the Saint Cloth Myth toys are pretty cool. That being said, they are a bit pricey and I can live with the shortcomings of the official toys.

With the green coloration and the pinwheel shuriken, this Furaimaru seems like a hybrid of the original Furaimaru, and Tenkujin