In Episode 05- “Judgment Pirates”, Navi makes a prediction that the Gokaiger should look to the police for the Greatest Treasure in the Universe. Uncertain about this since the collective bounties on them has unexpectedly skyrocketed, they travel to a local Japanese precinct to ask about the treasure. Not surprisingly, the police immediately recognize them from the wanted posters that a female S.P.D. (Special Police DekaRanger) officer named Marika “Jasmine” Reimon is handing out, and she arrests Captain Marvelous. As the five Gokaiger scatter, Marvelous is intercepted by the Earth Commander of the S.P.D., Doggy Kruger. Before Kruger can haul him off, they both see Zangyack soldiers and an Action Commander (also wanted by S.P.D. for destroying several planets) planning to attack Earth with missiles that bury themselves underground. After an initial fight, Kruger is injured, and despite still being handcuffed, Marvelous saves him. Putting faith in Marvelous that he will vindicate himself by stopping Zangyack’s plan, Kruger releases him, and the five Gokaiger engage the Action Commander. Commandant Toils orders the Action Commander to grow to giant size, and the Gokaiger respond by forming Gokai-Oh. Seeing that the missiles have been removed from Earth as promised, and how they work together with pride, Kruger calls to the Gokaiger and tells them that they should now be able to access the DekaRanger’s Great Power. The Gokaiger insert their DekaRanger Keys into their control columns, and the form of the Patrol Striker mecha appears within the robo’s body, forming Deka Gokai-Oh!

Deka Gokai-Oh adds significant firepower to Gokai-Oh. With the giant robo’s already-impressive agility and jumping abilities, it can now engage in running firefights with dual-wielded pistols. The Pat Striker can also disengage from the combo, however, and fight on its own with awesome swerving abilities and a pair of fender blasters. Lastly, Deka Gokai-Oh can fire all six Gatling cannons in its limbs at a target for the Gokai Full Blast finishing attack. 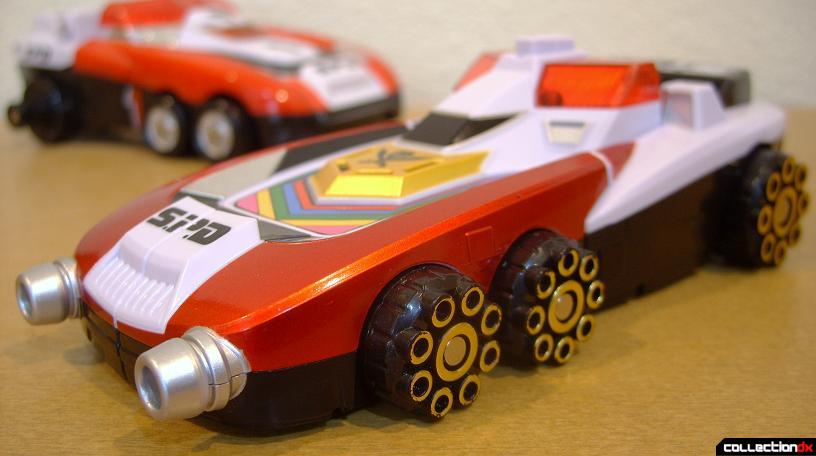 Unlike the original Patrol Striker toy from the DX Tokusou Gattai DekaRanger Robo in 2004, this version does not have a motion (i.e. “bump”) sensor, nor does it keep track of when it is transformed, which altered the effects that play in its different modes. 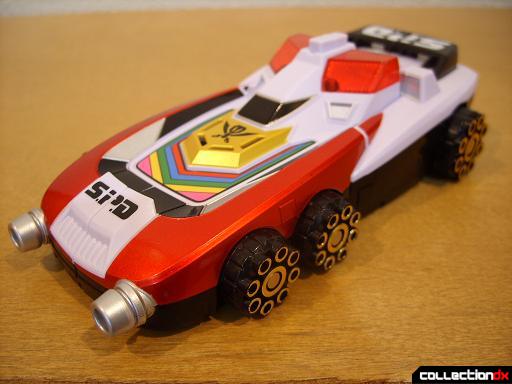 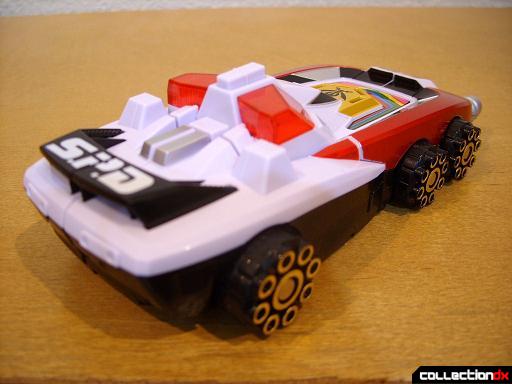 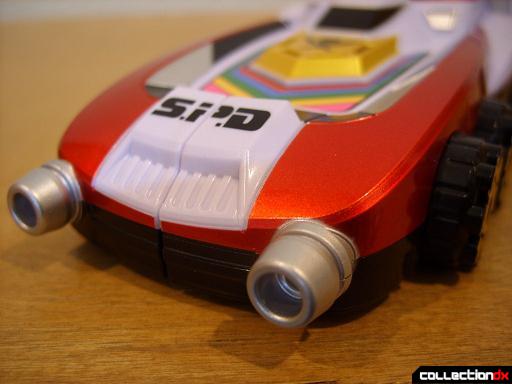 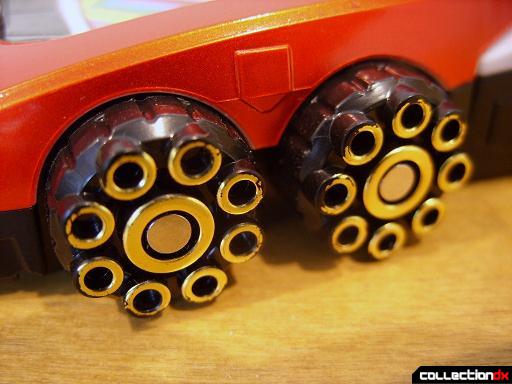 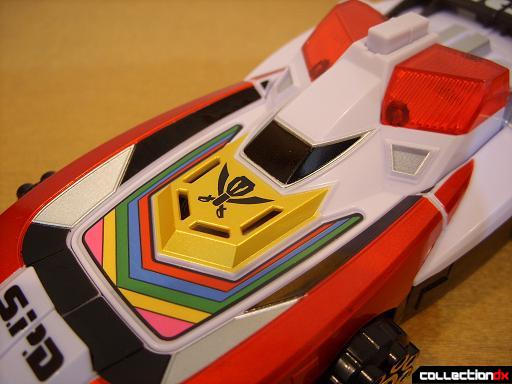 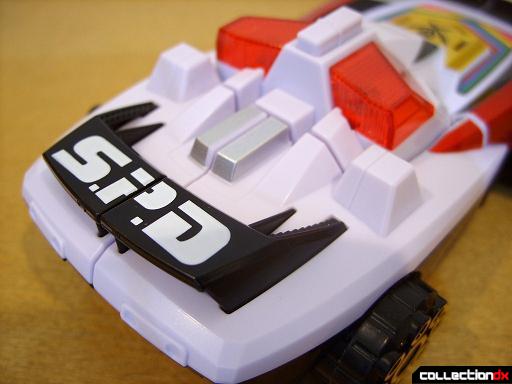 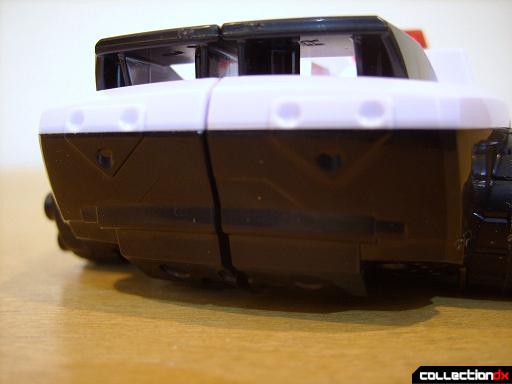 Pat Striker has a built-in light-and-sound feature, utilizing two red LEDs and a single speaker under the black-and-gold Gokaiger brand. Turning the electronics on, you will hear an activation beep identical to the one heard in other electronic toys from “Tokusou Sentai DekaRanger” (2004).
When you push the button once, you will hear an engine revving, followed by the Gokaiger technology voice say “Pato Striker hasshin!” (“Patrol Striker- launch!”), and the trademarked DekaRanger police klaxon. Pushing the button once will sound the klaxon again. 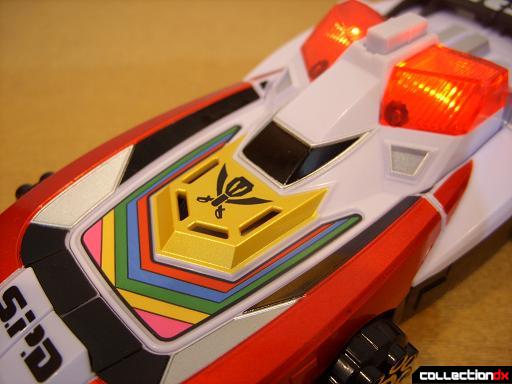 Now, there is a trick to finding the next two effects. The first bonus effect is a clashing sound followed by more klaxons (primarily used when Deka Gokai-Oh is formed). The second effect is a power-up sound followed by rapid-fire machine guns and an explosion (which is obviously the Gokai Full Blast sound-effect, though it’s not quite identical to how it sounds in the TV series).

Regardless of how they’re triggered, all five sound effects are accompanied by variations from the two LEDs. 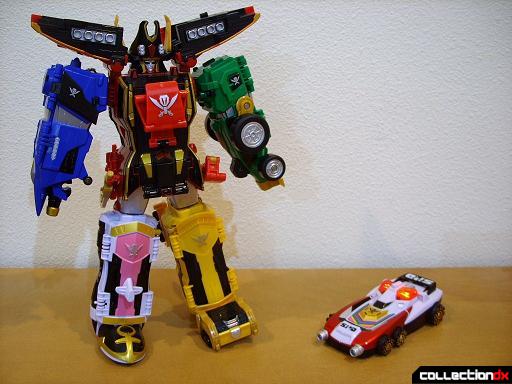 Deploying Pat Striker is done in the same way as the Gokai-Oh’s standard Gokai Star Burst finisher- spin the ship’s wheel along the back of the torso, and the five compartment doors pop open to reveal the components; the torso piece pushing itself forward a little via built-in springs, and a sound effect playing as it does so! 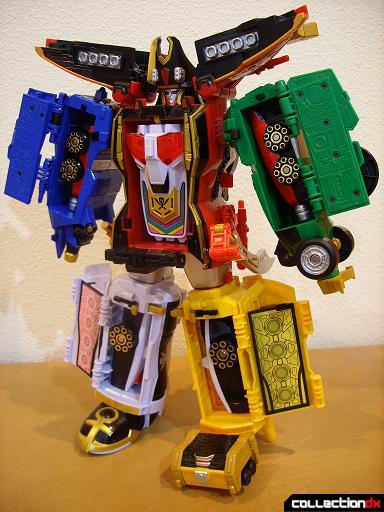 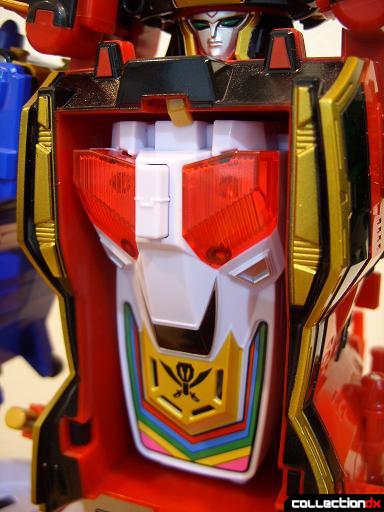 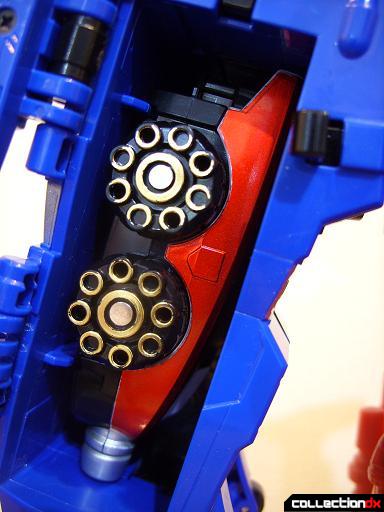 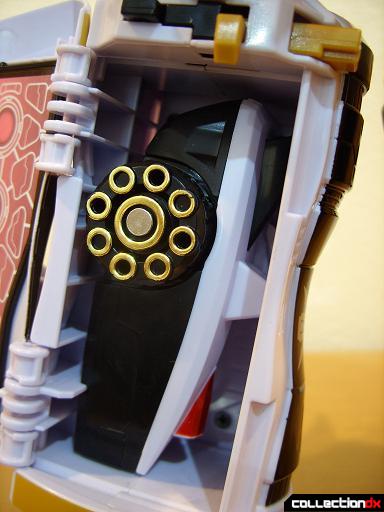 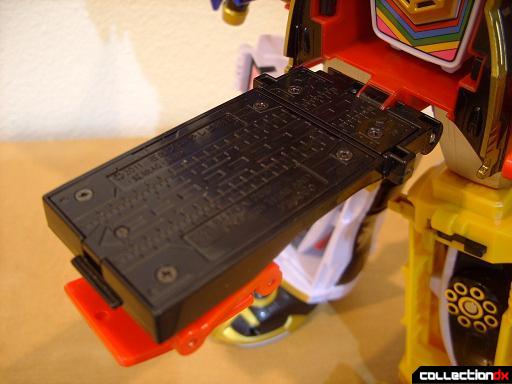 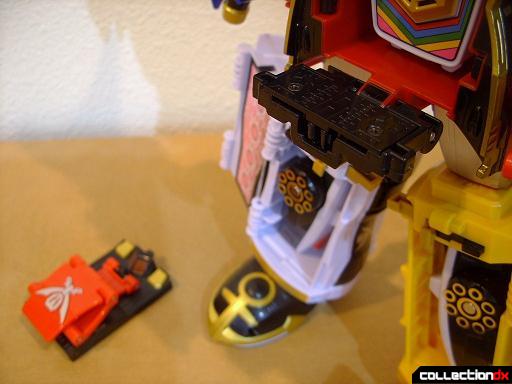 Removing the paired pistols for Deka Gokai-Oh’s use is simple- just press the release buttons along the back sides of Gokai Jet and Gokai Formula, close the two doors, and fold out the transparent-red handles and place them into the robo’s hands. 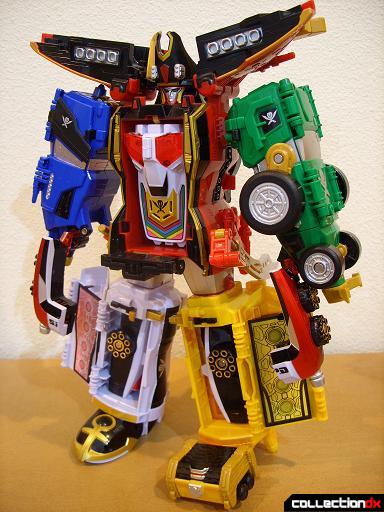 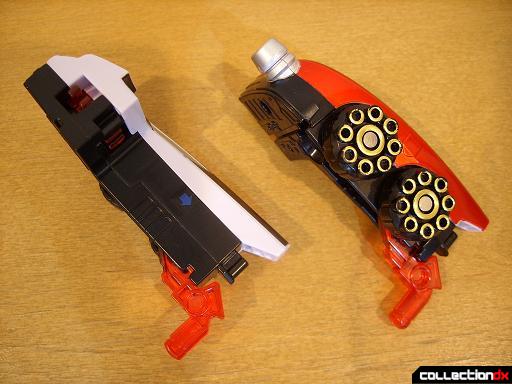 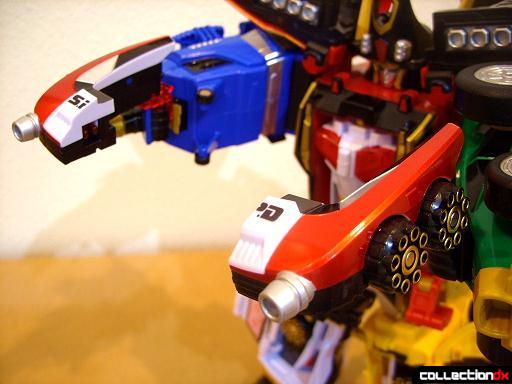 All sound effects are accessible in Deka Gokai-Oh, though the electronic On/Off switch cannot be reached unless you remove the torso component first. 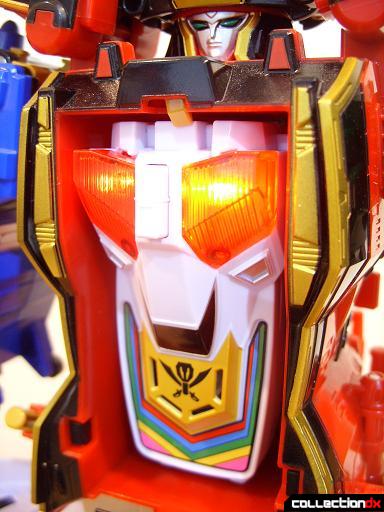 To remove Pat Striker, each of the Gokai Machines has a specially-designated tab that is pushed and this will release the five components of the accessory mecha. 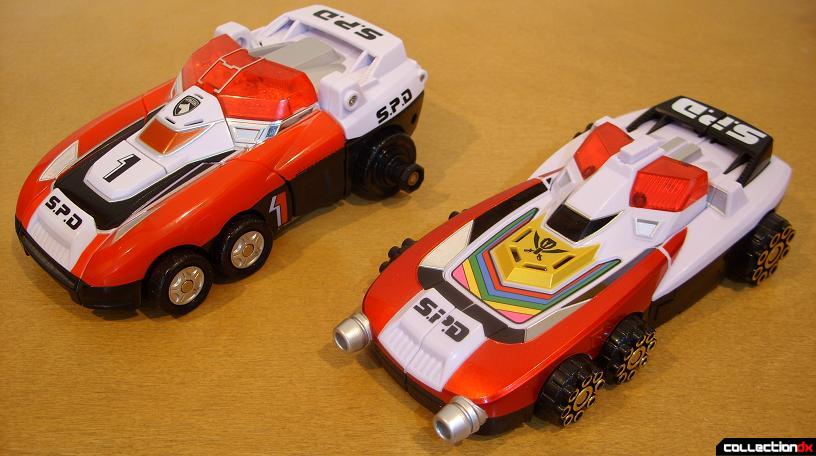 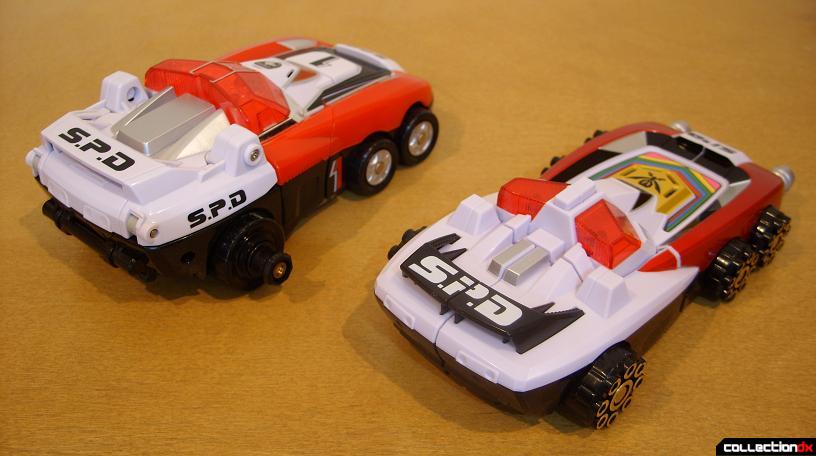 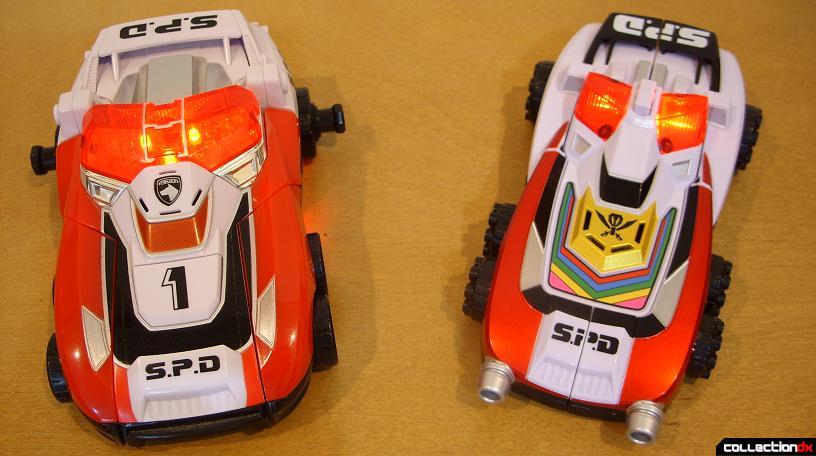 Awwwwww yeah! This is just getting better and better. Now, I know that having a flattened racing car for a police vehicle sounds as strange as it is totally bad-ass, but I am completely loving the choice for the DekaRanger tribute. First off, we get many of the same light-and-sound effects in the exact same mecha vehicle from seven years ago. That alone is praise-worthy despite the relatively minor cosmetic and functional changes. (This version is noticeably smaller than its DX counterpart, but not disappointingly so.) The front fender blasters and Gokaiger-rainbow decal are a little jarring, but that is the price I’m willing to pay for this spectacular return. 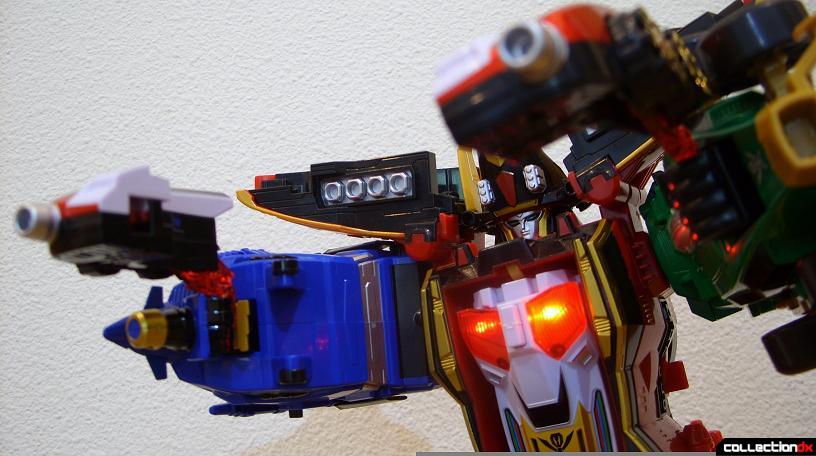 I was really looking forward to getting this particular Gokai Machine set because of its mind-blowing performance in its debut episode- pulling many of the same maneuvers that the DekaRanger Robo did in its own series! It is clear, though, that aside from the light-and-sound feature, Deka Gokai-Oh does not have as much of a striking deploying-the-doors effect as Magi Gokai-Oh did because nothing pops out. This may be a disappointment to some, but it wasn’t to me because its presentation is cleaner and it’s not as hard to reset each time. I love how the wheels double as Gatling cannon barrels for the Gokai Full Blast finisher, rather than using just the two pistols. THAT is some excellent use of space and what is available on-hand! (Actually, it was the later second-lead combining mecha DekaWing Robo that had the dual pistols, not the DekaRanger Robo, but I digress.) 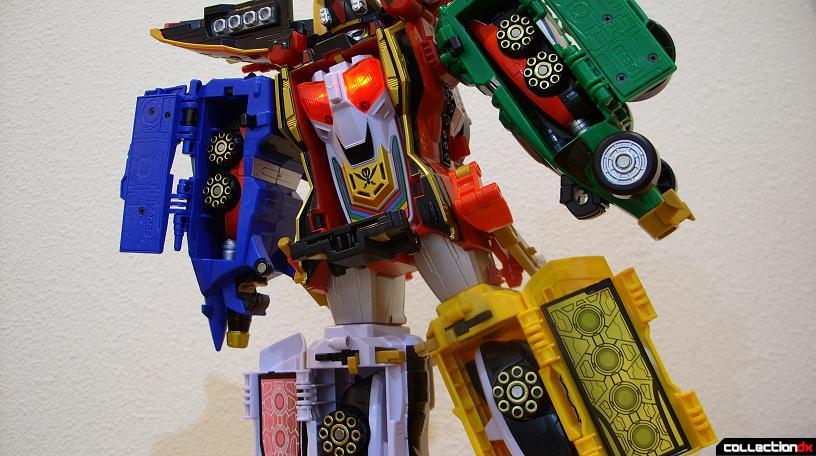 This leads me to my complaints, of which I only have two. The first is difficulty in using the sounds, particular those bonus two that require you holding the button for an unspecified time. I spend more time trying to get ONE SOUND than I do actually enjoying the blasted thing! With the torso component pushed out by a spring rack in back, the component retracts every single time you want to press that button. I think I would have preferred if it didn’t have as weak a spring even though I understand its reason for being there.
The other complaint, I admit, is more of a petty nitpick, but it must be voiced nonetheless. The design of the two pistols in Deka Gokai-Oh’s hands are oriented kinda weird. The way the two components are shaped makes me think they’re being held sideways all the time instead of upright. As a result of this, because of how Gokai-Oh’s arms angle outwards slightly, the pistols never point directly forward in a convincing manner. (If I try to orient them parallel forward, the right pistol becomes very loose because of the open-palmed right hand.)

I think I got so worked up in anticipation for this toy that when the tiniest of flaws popped-up, it feels like the whole thing has been ruined. I have only myself to blame for that, I supposed. Why create an accessory mecha with more guns when Gokai-Oh already has two built into its hands? I don’t know, but Gokai Machine Series 02- Pat Striker has a lot of charm to it and, so far, is my favorite of the accessory mecha we’ve seen so far in the Wave-1 releases until June ‘11. Now I just wish there was somewhere I could stash the flip-down chest door when I disconnect it to streamline Deka Gokai-Oh’s torso other than to toss it aside… Strongly recommended!

Very detailed and well-done review, Eva :) One can see you enjoy your job and we enjoy it with you.

You're getting the third Gao/Shinken booster set?

Yes, I do very much enjoy working with CDX! ^_^

At this point, do not have plans to get the Gao Lion set. (I discussed this briefly in my Vlog #6.)

Yes, I like scribbling here once in a while too. I admit I'm not doing as much as I like due to my obligations as my site's main toy photographer and college, but one day I may be able to balance things in a more satysfying way.

I didn't know about these logs of yours... now I know. And knowing is one more subscriber to you on YT :P

I've been so worn out each day for the last month-and-a-half of preparing for my younger sister's wedding here (another 28 days to go) that I haven't had my usual energy to do any reviews. I've got two Legos, two TFs, and a backlog of two MMPR-1 Dlx. Zords all begging for attention. (I MIGHT have time Tuesday to shoot Leader-class Ironhide and hopefully get him up before the end of the week.) And on top of all that, the Gokaiger stuff is now slowly-but-randomly trickling my way, and I have to interrupt my line(s) of though to do so, which screws me up even more.

Yeah, as soon as the vlog goes up on YT, I attach the link to the provided space I have here for a blog. (Although, now I'm just gonna attach a link- rather than embedding the video- because then I can get the higher numbers of people to watch the video on my channel where it counts more.)

great review as always :)
and a fun upgrade for gokai-oh. i'm going to have to get me one of these.