The Gokai Gun is one of two standard sidearms used by the Gokaiger. While each Gokaiger has both a Gokai Gun and a Gokai Saber when they first henshin, their personal fighting styles often lead to them swapping weapons mid-battle to wield dual weapons, though Gokai Red usually keeps his weapons as deployed. (In an extreme case, Gokai Blue wielded all five Gokai Sabers at once for an improvised-yet-successful ‘Five Sword Technique’.)
Lacking individual weapons for each, the Gokaiger can transfer the power of any Ranger Key they have into a Gokai Gun for the powerful Final Wave- Gokai Blast or Final Wave- Gokai Scramble finishing attacks (the latter while wielding the weapons in dual fashion).

Ranger Key #002- Gokai Blue is provided with this set, although it can also be acquired through other official accessory sets (namely capsules and candy toys) with other Ranger Keys. 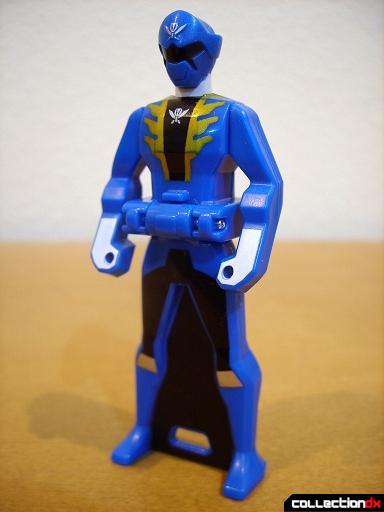 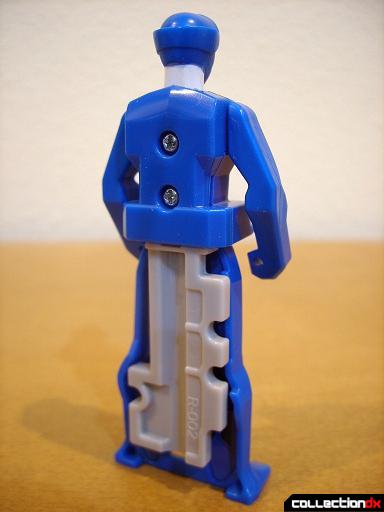 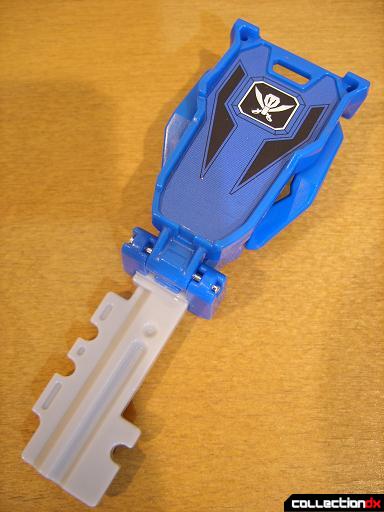 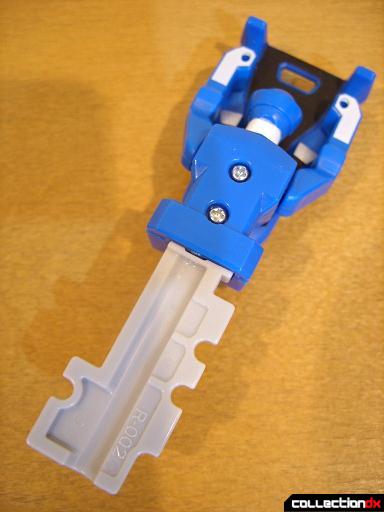 The Gokai Gun is shaped after flintlock-type pistols commonly seen starting in the 17th century. As a short-range weapon, flintlock pistols were often teamed with a sword because of the long reload times. 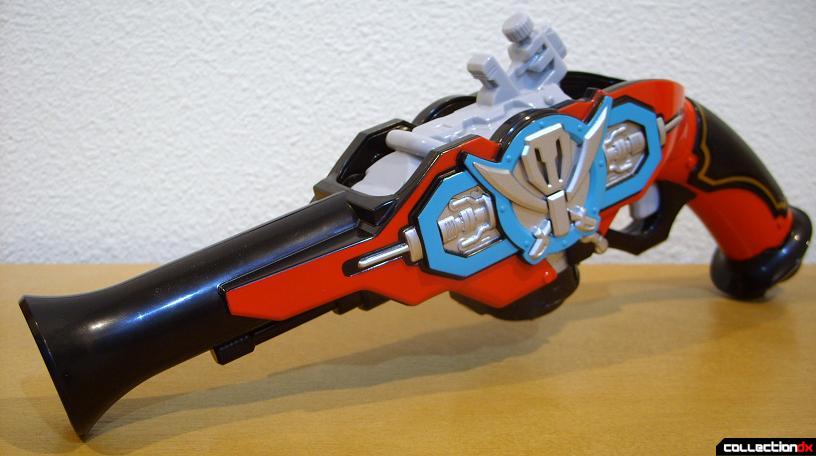 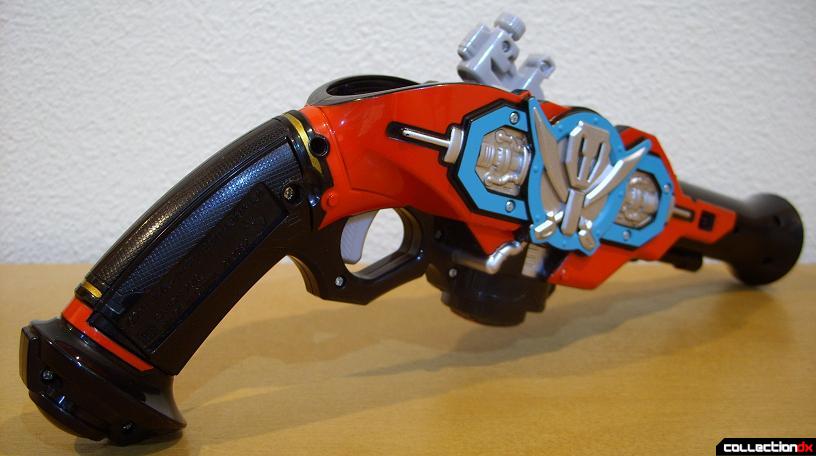 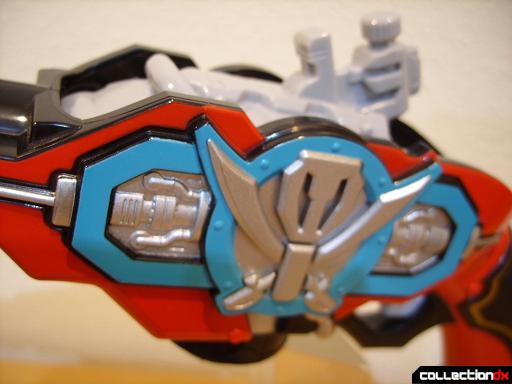 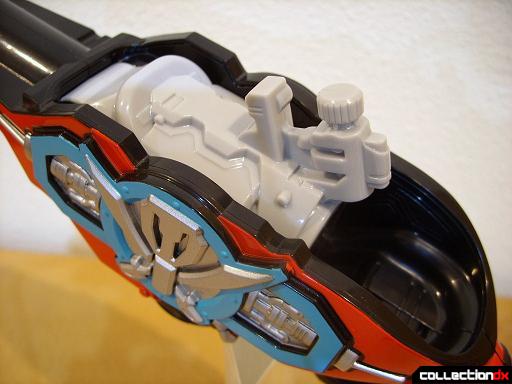 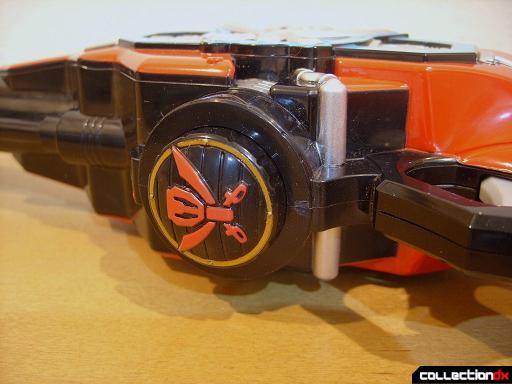 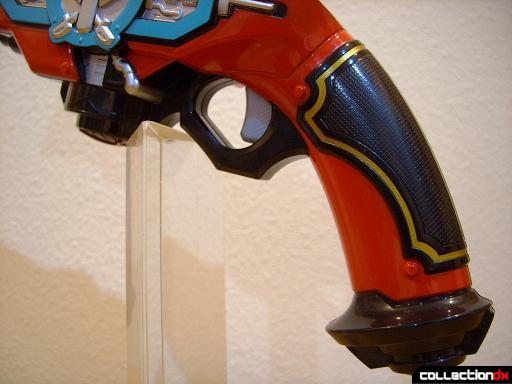 For the first time ever in a Super Sentai role-play blaster, the toy’s speaker is located inside the muzzle of the Gokai Gun! Unlike what is seen in the TV series, there is no light-up feature. 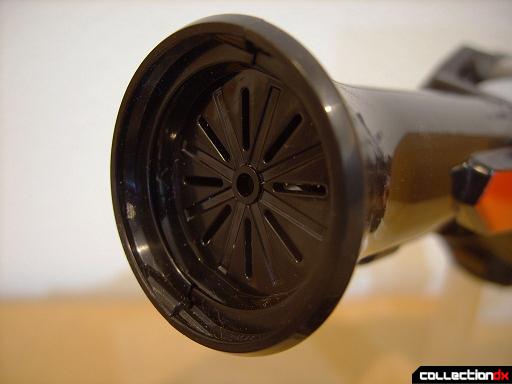 When the toy’s electronics are turned on, and the trigger is squeezed, one of two simple gunshot sounds is heard.
If the trigger is held down for 5 seconds, the TV series’ narrator and voice of Gokaiger technology will say “Gokai ni, ikuze!” (“Let’s go, Gokai[ger]!”) one time, but a gunshot will not be heard when the trigger is released.

To initiate a Final Wave attack, the button brandishing the Gokaiger logo underneath the Gokai Gun is depressed, and a section of machinery atop will spring upwards. Then you can insert any Ranger Key into the provided slot, turn it horizontally (a power-up sound is briefly heard), and then pressed the inserted Ranger Key flush with the rest of the weapon. The voice will declare “Fi-i-i-i-inal Wave!” and a new repeating power-up sound will be heard until the trigger is depressed for the actual Final Wave blasting sound. As long as a Ranger Key is inserted into the Gokai Gun, the single Final Wave blasting sound will be heard. (When it is removed, however, the finishing attack sound cannot be interrupted by squeezing the trigger rapidly as it’s playing.) 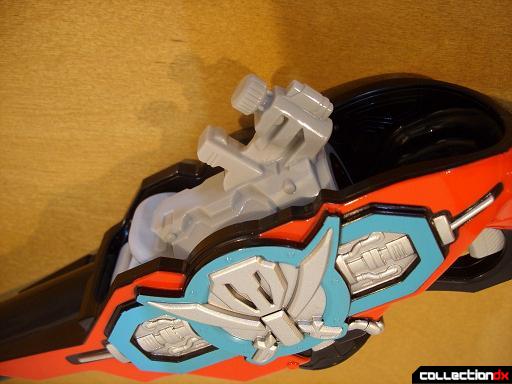 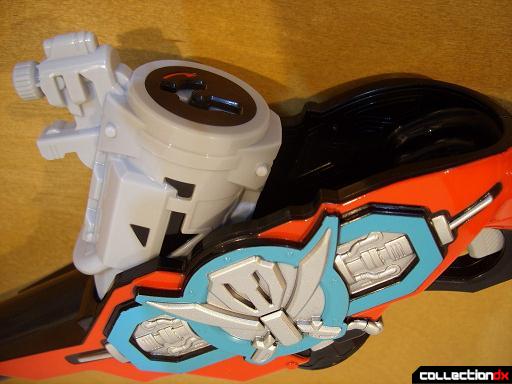 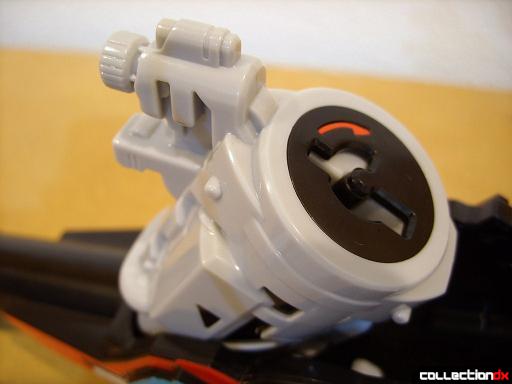 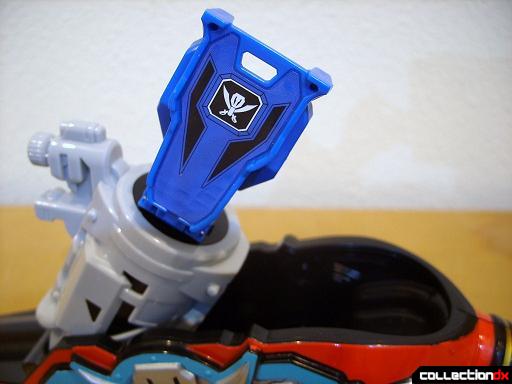 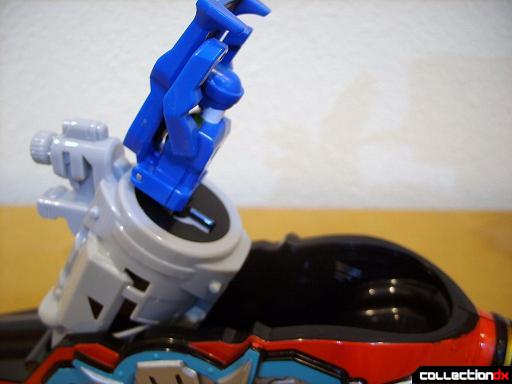 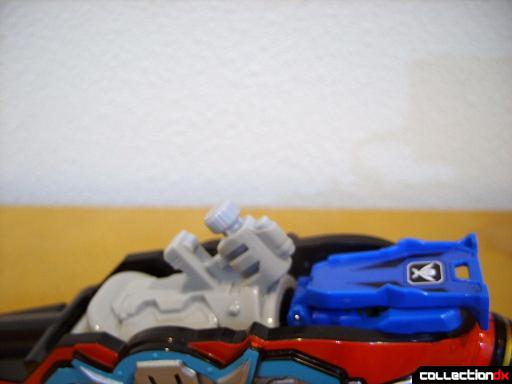 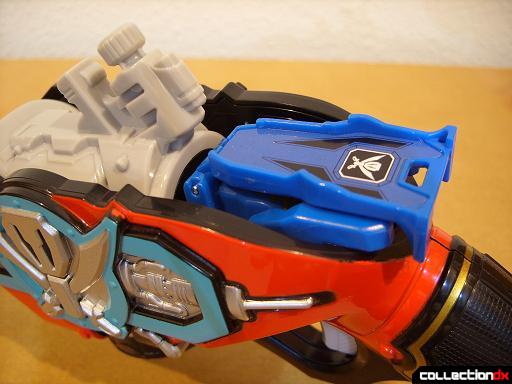 It should be noted that, unlike the Henshin Keitai Mobirates henshin device, the Gokai Gun does not uniquely recognize individual Ranger Keys, and so it will react the same towards all of them.

For the second year in a row, we are given another simple non-transforming blaster with a built-in special attack feature. The Final Wave configuration is even less flashy and immediately noticeable than attaching a Header to the Gosei Blaster for its finishing attack(s). This year’s blaster is better defined and recognizable as being based on a flintlock pistol, a real weapon from history, and fits in quite appropriately with the pirate theme in “Kaizoku Sentai Gokaiger”. I really like the integration of the past and future by having techy bits carefully mixed in with things like the bell-shaped muzzle, wooden handle, non-functional cock adjustment dial and molded-in ramrod under the barrel. (The whole toy is made of ABS, by the way.) The paint applications, and selective use of turquoise, are beautifully applied seeing as the whole thing is molded in black plastic except for the trigger and cock! Something else that blows my mind is that the toy’s speaker is located in the barrel muzzle… where the sound of any gun comes from! This arrangement also removes a level of asymmetry that haunts almost all toy role-play weapons, be they guns or other. 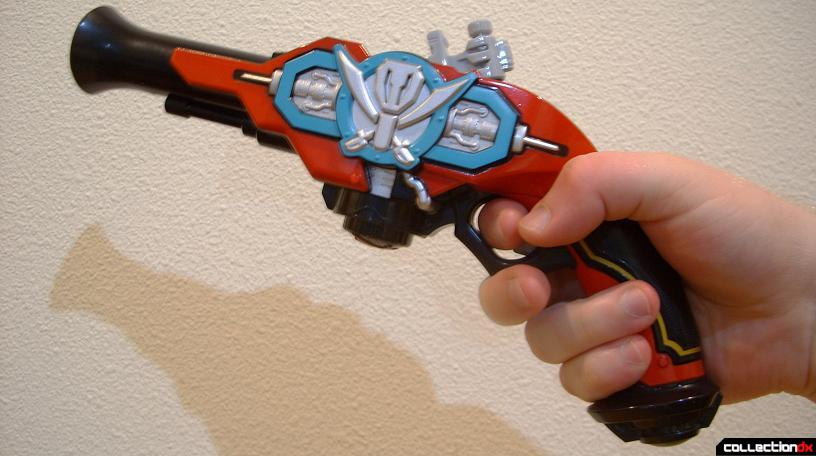 Two things may be a drawback from past Super Sentai blasters. The first would be general lack of movement and transformation. Only the cock (the light gray part on top) can move, and that is only to interact with Ranger Keys. (Am I disappointed it doesn’t uniquely identify them? No. That would also have increased the price significantly as well.)
The other, of which I’ve heard more-pronounced grumblings, is that it lacks a light-up feature. I was more surprised than disappointed that no LEDs were used, considering the weapon noticeably flashes along the sides in the TV series when preparing for a Final Wave, but I can see that there was an understandable lack of space for it and so I am not bother by this.
My only complaint thus far is how the grip is just small enough that I can’t get the other three adult-sized fingers in there comfortably, and I have to resort to an unorthodox grip to hold the weapon in one hand. Would it have killed Bandai to give us an extra ¾”? I doubt any kids would have noticed or cared if they had!

It is unquestionably clear to me, though, that one cannot really enjoy the Gokai Gun without a companion Gokai Saber. Simply put, it’s like having jelly without peanut butter, carrots without peas. The button just in front of the trigger is obviously meant to be pressed up against the equivalent on the Gokai Saber just like they do on the show because it is so bad ass to do so! While having separate standard sidearm swords and blasters is not unheard-of in Super Sentai, it is a potential turn-off to a modern audience used to the more common integrated-and-transformable designs.
(Damn-straight I’ve got a Gokai Saber on order-!) 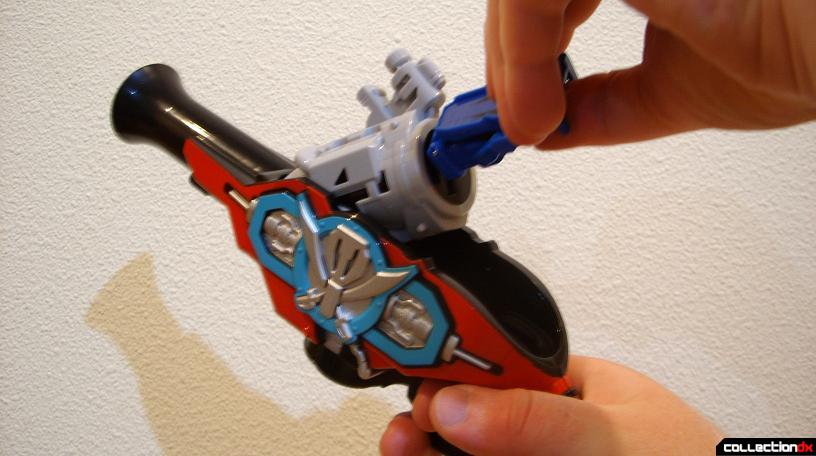 Again, the simple blaster design does not bother me in the slightest because the Gokai Gun is so awesome. Moldings and paint apps are flawless, the electronics are clear and easy to use (but damn that speaker is loud, sheesh!), integrating the already-awesome Ranger Key system is a significant part of its success, and it just works so well with itself that I find myself having to actively look for flaws rather than just typically standing out like sore thumbs. Strongly recommended!

6 comments posted
I love that the moms in the

I love that the moms in the beginning of the video are holding the kids in front of them and using them as meat shields. "You go first kids, we're right behind you."

And that green guy duel wielding pistols hanging upside down from a trapeze! Nutty. I never watched these senati shows (I was too old for power rangers) but now I'm intrigued :)

Yeah, "Gokaiger" is turning out to be a good show.

Since you mention it, do you know if the actresses playing the moms (actually, I think they're teachers) are cameos by Super Sentai alumni? I may be hunting ghosts here, but the way they're portrayed and highlighted makes me wonder...?

good review :)
i don't care much for roleplay stuff, but i would get this thing if i did.

and yes, gokaiger so far is an excellent series to me. consistent story, and great action. it does things a little differently, especially in the fight scenes department. (how often do you see a sentai team blasting away with their sidearms? )

"(how often do you see a sentai team blasting away with their sidearms? )"

GoGo-V and DekaRanger to name two.

great, now i feel stupid for forgetting the first sentai series that i watched. never saw gogo V though.
but still, compared to dekaranger, the 'blasting everything' is a lot more prominent here.

hope to see your review for patstriker soon :) after that, back to MMPR?

Yes, probably back to MMPR, though I have a pair of newer Lego sets I need to go over as well.