Gear Fighter Dendoh was an undistinguished mecha anime from the turn of the century. The show followed the exploits of a young boy who pilots the titular mecha to defend against an alien menace. I’ve never seen the cartoon, but I have admired the mechanical designs from afar.

Bandai released a couple of solid figures when the show first aired, and has now revisited the characters for its Super Robot Chogokin line.

Review sample courtesy of our friends at HobbyLink Japan (Hlj.com) 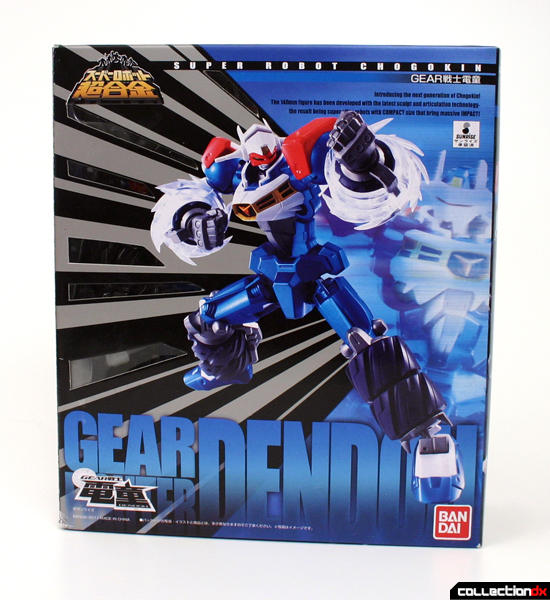 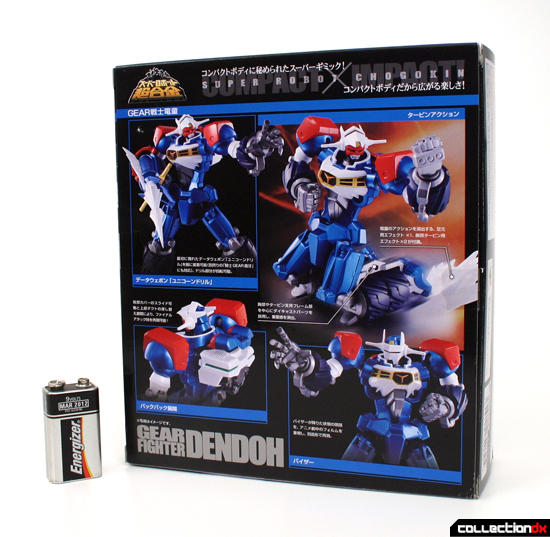 Inside, the figure rests in a plastic clamshell with its accessories, including an alternate face, alternate head, backpack engine-extension thing, horse-head-sword thing, and variant hands. Also included are three clear resin pieces which convey movement (more on those later). 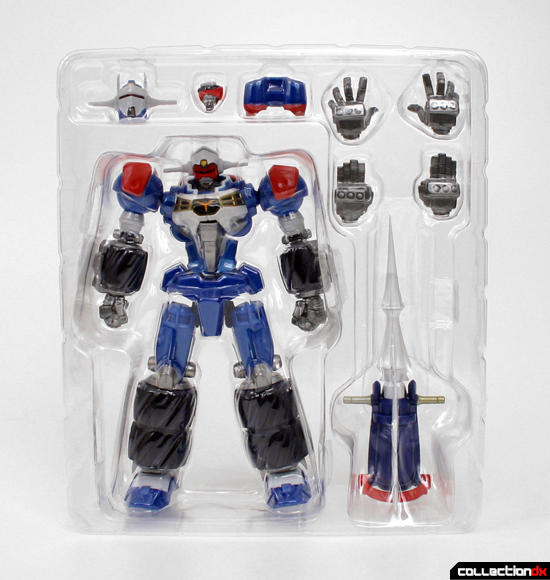 I was immediately struck by the sheer quality and presence of this toy. The finishes and materials are top notch. The character design is superb, beautiful and dynamic from any angle. 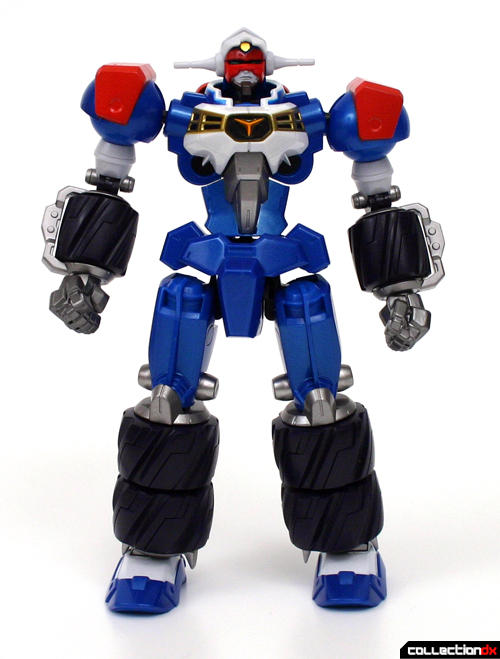 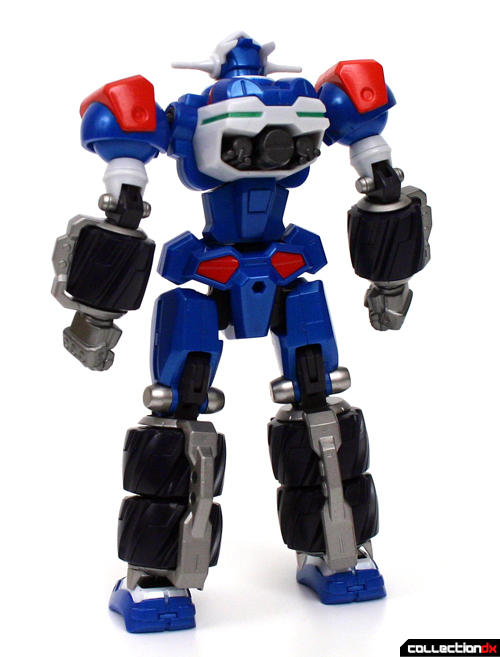 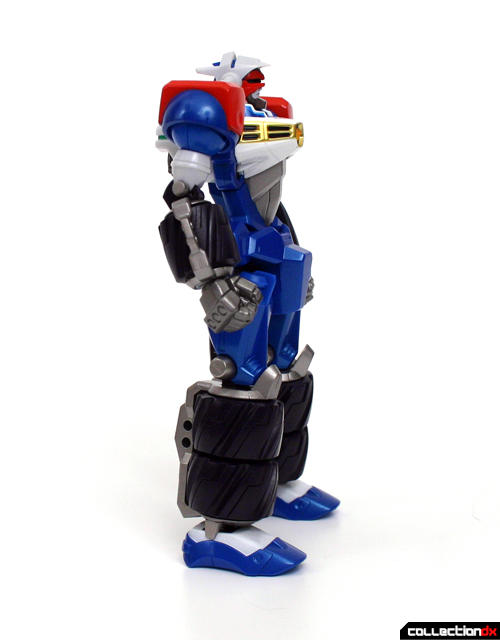 The diecast is a little scarce for a Chogokin, but I don’t really mind. So high is the quality of plastics, and so well balanced is the figure, you don’t want any more heft. Metal is in connecting bars in the arms and legs, as well as the chest. 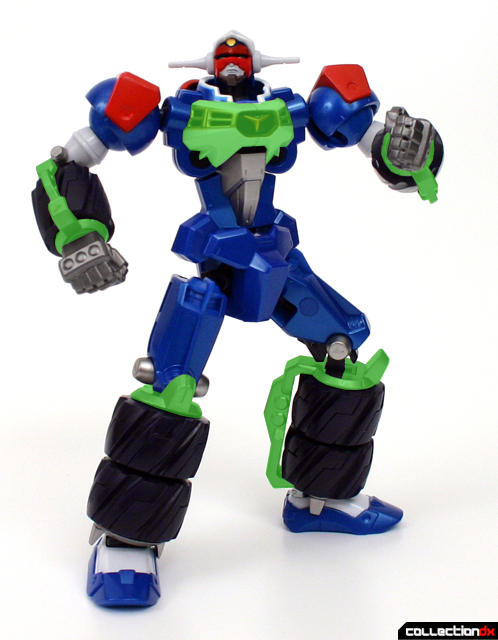 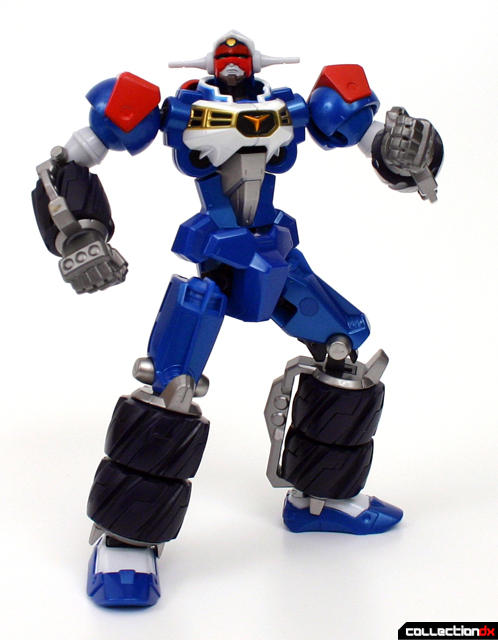 This thing is a posing monster. All of the joints are buttery and do whatever you want.

Check out these knees: 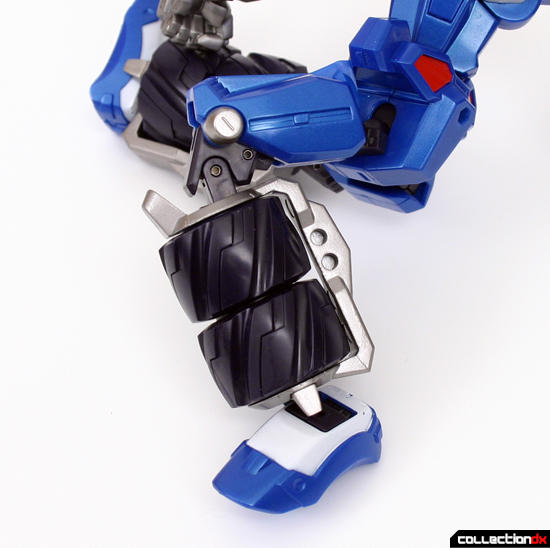 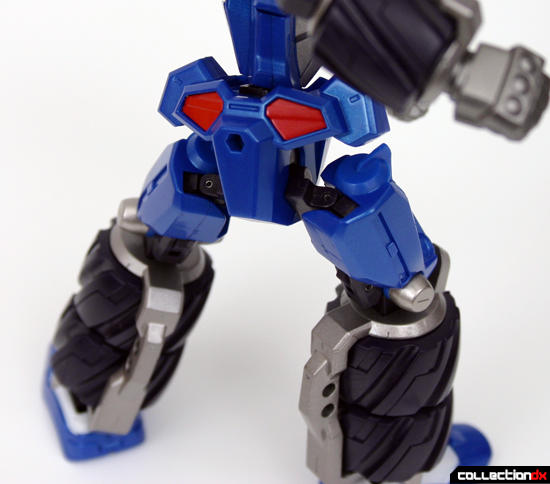 Dendoh is a joy to photograph. After reviewing countless homely rejects, it’s a real pleasure to work with a super model. 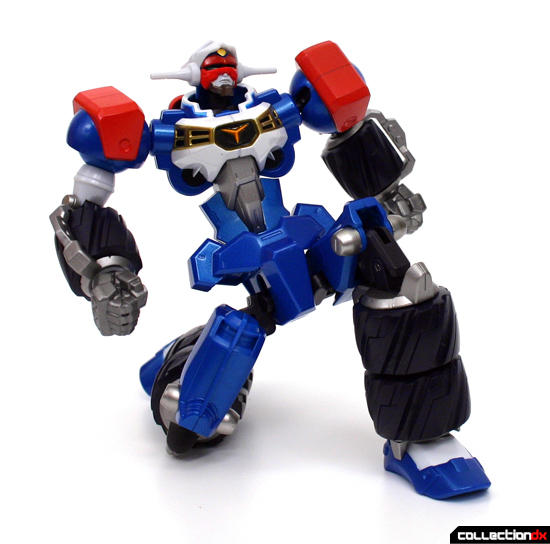 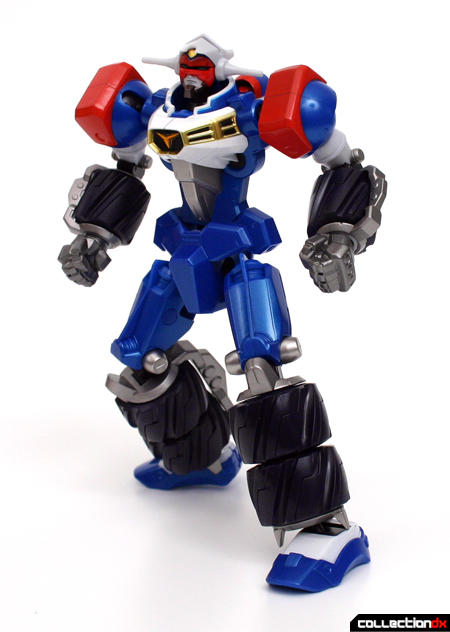 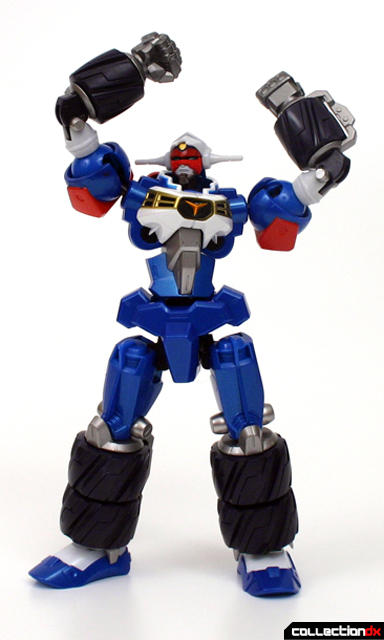 The alternate faces and fists and extra pieces make the figure come alive. Such swagger! 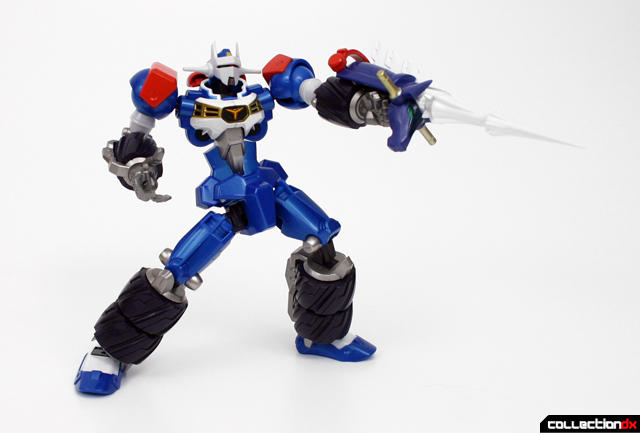 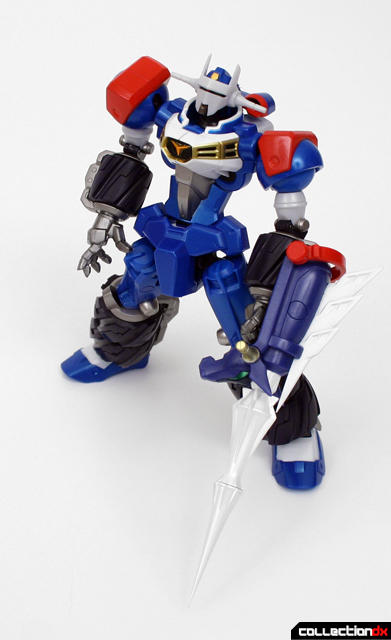 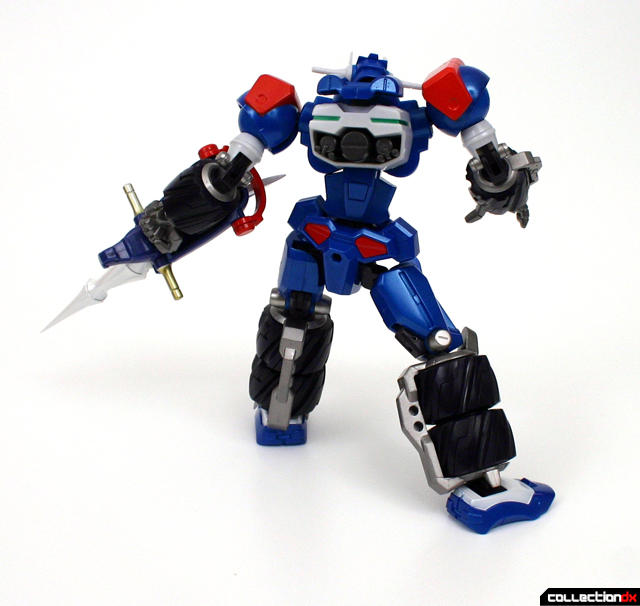 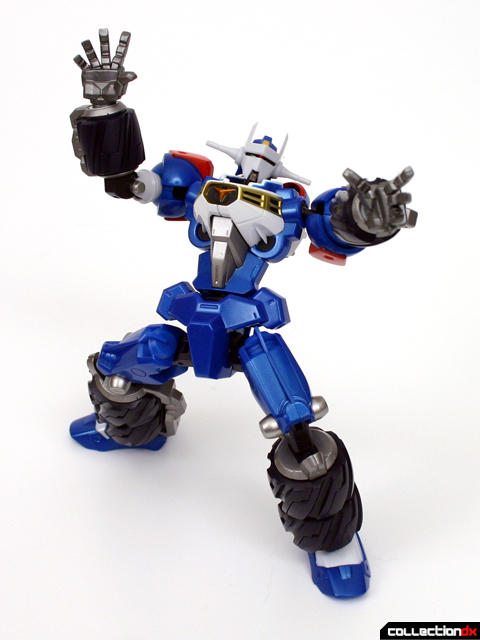 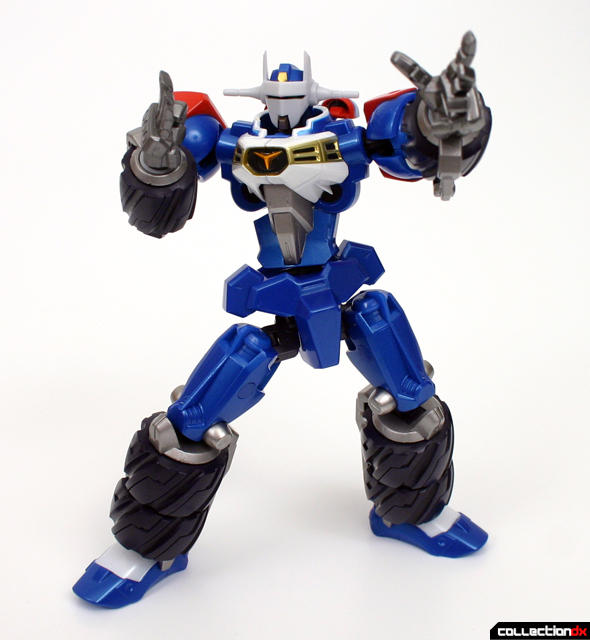 The afore-mentioned resin pieces add interesting notes to the posing. 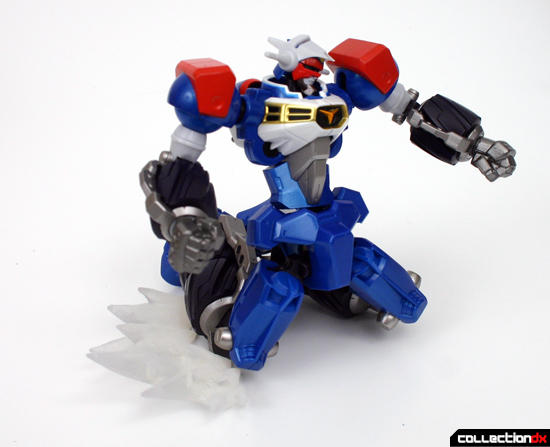 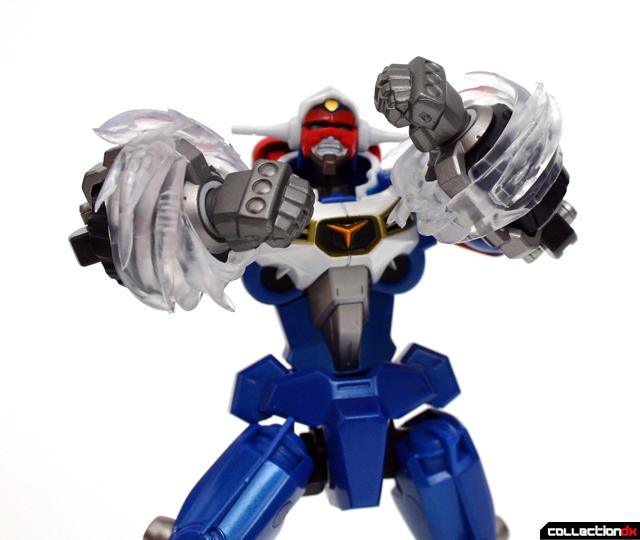 I can’t recommend Dendoh enough. I rarely gush over a modern toy, but this is what a modern toy can, and should, be.

Oh, I remember hearing about this, even saw one of the models up close. Meh, it was okay. I too heard it was a mediocre series The way it scooted around on the lower legs was too strange for me at the time so I didn't give it a second thought.

And though I don't have one, I do have the SRC Shinken-Oh (which I reviewed, and have reserved the rights to also review Gokai-Oh and DekaRanger Robo when they come out), so I can attest to the quality of SRC, and confusing LACK of die-cast.

If there was more metal in these figures, the asking price for them would be much higher.

That being said, that unicorn thing is actually one of the Data Weapons, the Unicorn Drill. There are five more in plastic: the Viper Whip, Bull Horn, Dragon Flare, Leo Circle, and Gatling Boar. With the exception of the whip, all of the other Data Weapons are Tamashii Web exclusives.

And as for how I know all that stuff about the weapons? I play a lot of SRW, as I have hinted many times already.

The show is REALLY above average for a toy commercial - animation is seriously top-notch (Sunrise at the best of their game with cels, just before digital), characters are surprisingly well-developed and written - the main two have a well-built dynamic, and the designs are great fun. If you're looking for a good ol' mecha fisticuffs burst of action, there's surprisingly few that do it better.

This Dendoh looks a quality figure too, but not enough to really grab me. Also the mask looks badass? But it basically only wears it at the start of fights for some reason.

While I didn't find the show mediocre, I'm extremely disappointed in how it never tried to be anything more than a kiddie cartoon and completely wasted the concept of the mech itself. Why bother having a highly agile robot with turbines on its limbs and a kung-fu practitioner as one of its pilots when you're going to waste entire episodes having the kids blow their load early...err I mean fire the Data Weapon Final Attack, miss, then scramble to get the batteries recharged and try again. And to pour salt into the wound, Ogre's pilot frequently beats them up with his martial arts skills, which is what they should be doing in the first place.

Are you going to review the Ogre figure - I know it is the same figure. But the color scheme is oh so sexy and the viper whip way too cool.

I have the original toys to this series and love them. When it was announced that they were doing a smaller version without the electronics I thought WOW! I was not disappointed when Dendoh and Ogre arrived! They are great to pose in battle scenes together. I just got the Data weapons exclusive set and they really add to the figures shelf presence. Great toys!

Anyone else notice it has the "Megazone 23" Garland's taillights on its butt, just like the Evangelion Units did on their backs?

Dendoh's actually pilotted by two boys though later on it gets modified so it can be piloted by one while the other pilots Ouga.

I love this figure. I am not sure why? It's just one that always grabs my eye. And the articulation is so good that I always pick him up and mess with him. The colors just pop on it. The pictures really don't do it justice. It just surprised me with how much I like this one.