Fafner Mark Sieben comes from the Japanese anime called "Fafner in the Azure". Just a little back-story according to wikipedia.com:

At the beginning of the story, much of the world has been destroyed by the Festum and the remote Japanese island of Tatsumiyajima (竜宮島?, lit. Dragon Palace Island) has only remained unscathed by virtue of an advanced cloaking shield. The island's young people continue with their daily lives unaware of these events, but after many years of peace a lone Festum discovers Tatsumiyajima and attacks. The adults activate Tatsumiyajima's hidden defense systems and attempt to repel the attacker but to no avail. In desperation they order the deployment of the Fafner Mark Elf but its pilot is killed en route to the hangar. Left with no further options, they send a young boy named Kazuki Makabe as the replacement pilot assisted by Soushi Minashiro from within the Siegfried System.

The Festum is destroyed but with Tasumiyajima's whereabouts exposed the adults choose to abandon the island's current location. Production is accelerated on the additional Fafner units and more children are recruited to pilot them. It is also revealed that the cloaking was not meant to conceal Tatsumiyajima from only the Festum, but the rest of humanity who would seek to use its technology in the greater war against them. Before long this is precisely what happens and Tatsumiyajima is coerced into giving the Fafner Mark Sechs to the Neo United Nations.

While there is a dizzying amount of Fafners in the show, the one we have here today is the Fafner Mark Sieben from the Robot Spirits line from Bandai. This is number 99. The figure comes in the classic Robot Spirits windowed box that shows off the contents. 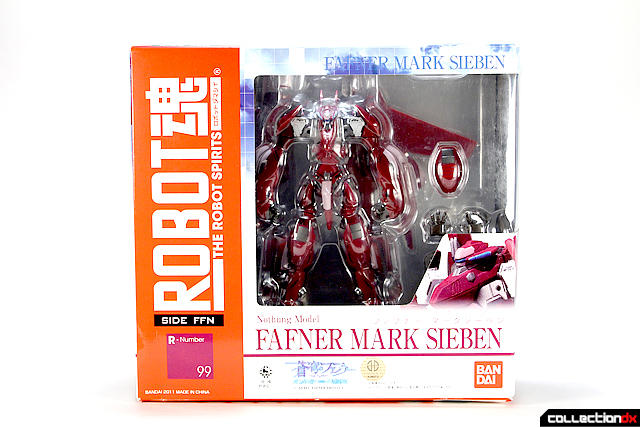 Once freed from it's plastic tray, you get a well balanced and well detailed figure dressed in a nice shade of purple (which was a bit difficult to photograph properly with my setup). The figure is made out of PVC while the wings are made out of a harder ABS material. 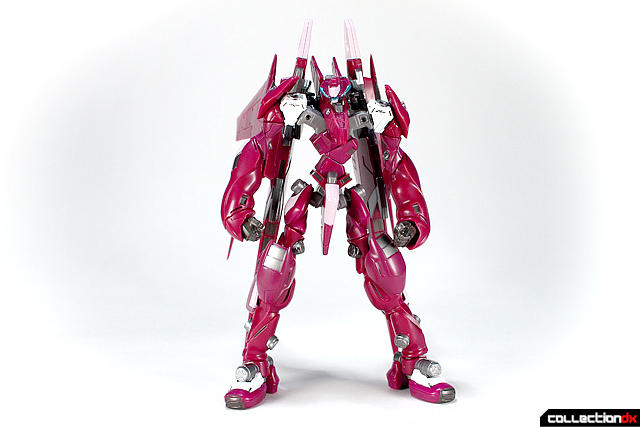 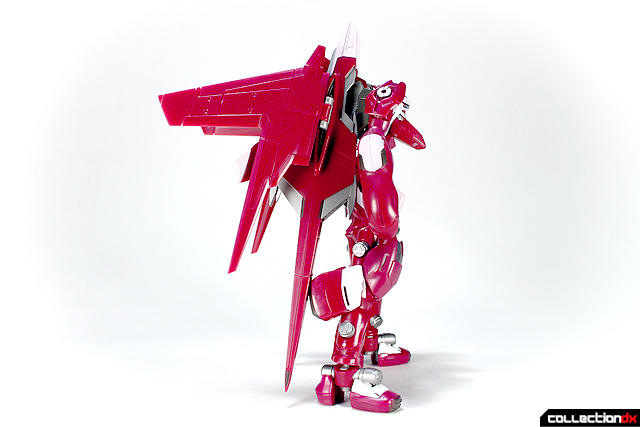 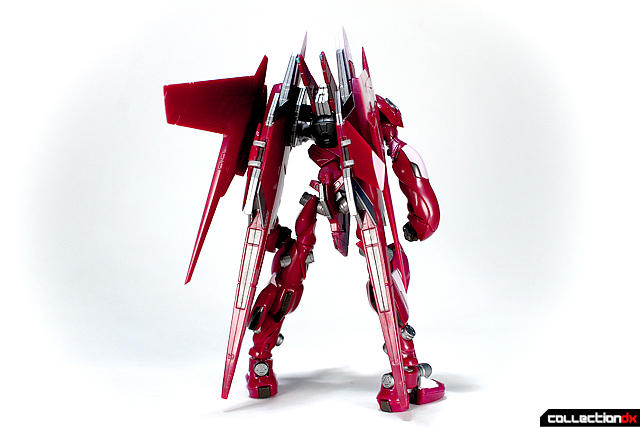 Up close you can check out the details further. All paint apps are sharp as expected. There are some small sharp tampo prints on the white shoulder pieces. I have read complaints on forums about the head being too small. 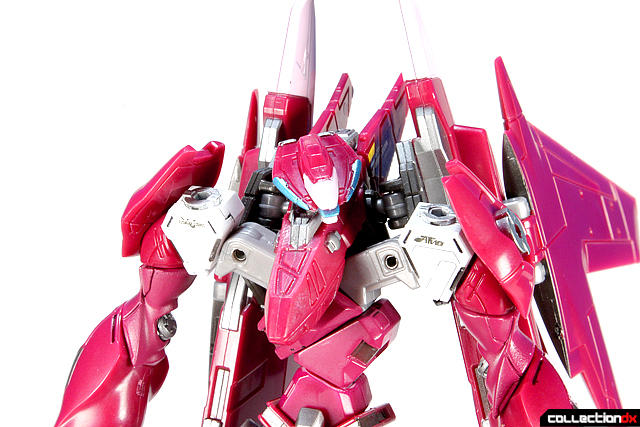 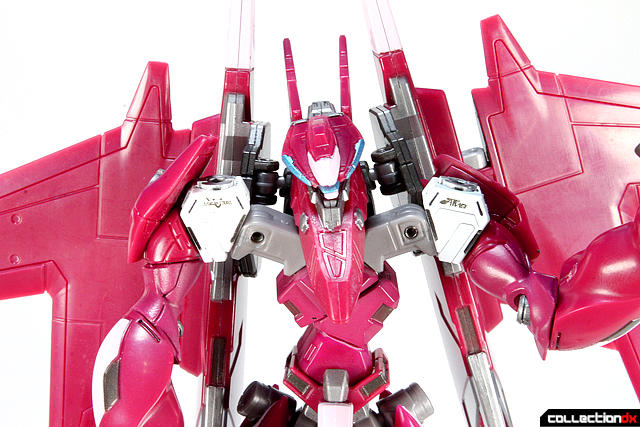 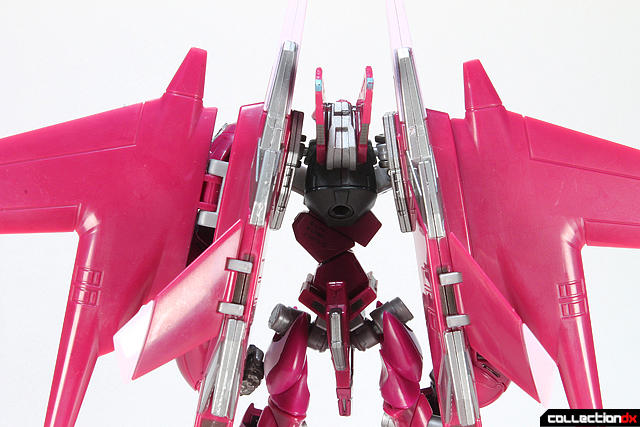 The Fafner boasts some very interesting articulation. Notice the segmented waist. Those diagonal seams provide the waist articulation for the figure. While asymmetrical in design, it actually does not hinder movement as much as one would think. 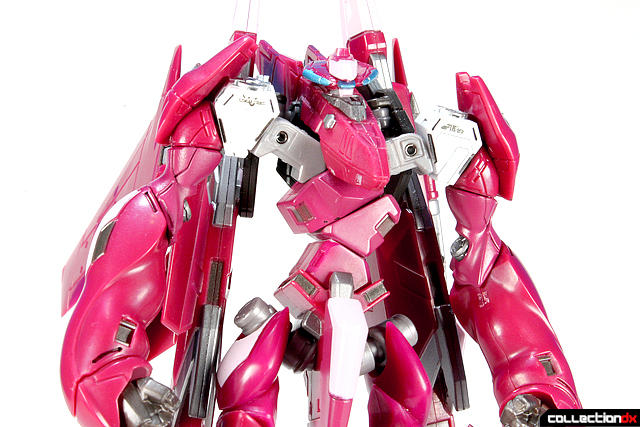 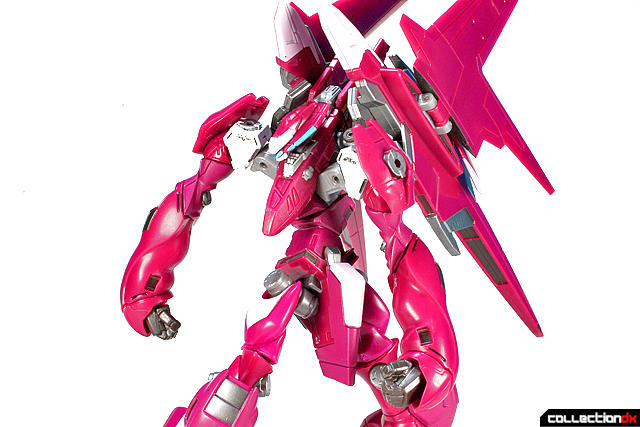 The arms also have diagonal swivels in it's articulations. Again, at first it would seem to hinder articulation until you start moving it around and realize that it works in its favor. 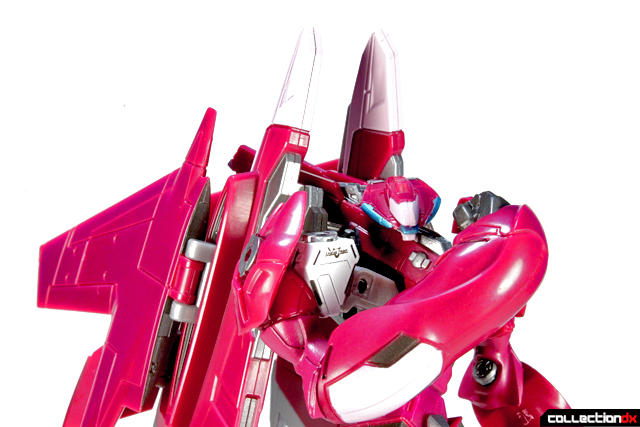 The legs however are a different story. The knees don't just bend, they swivel on an angle also. The diagonal swivels are a theme that is carried out in most of the figure's articulation. This requires a bit of work to get the legs where you want them without making them look twisted. You will see grey cylinder pieces sticking out of the figure in places. Some are on an angle. The joints pivot along the axis of these pieces. Even the shins get this wacky articulation. This allows for some creative posing. How many robots can you get to squat? 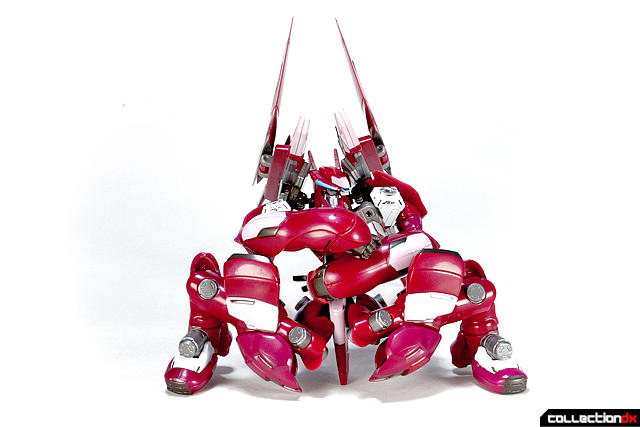 There is an extended mode for the wings which allow for flight. This was surely believed to cause the figure to flop backwards, but surprisingly it stands without a problem. The wings unfold and snap into the base of the flight unit for sturdiness and clean look. 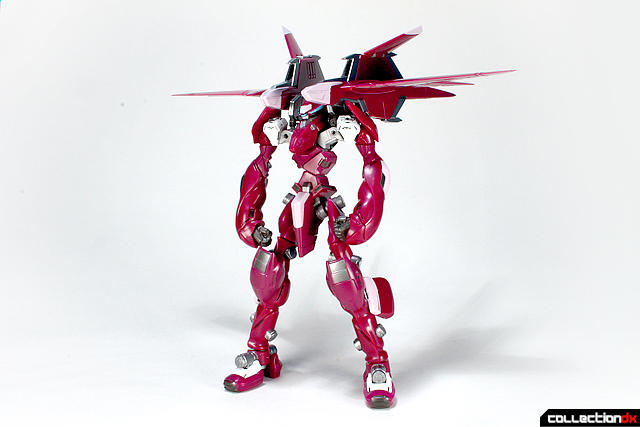 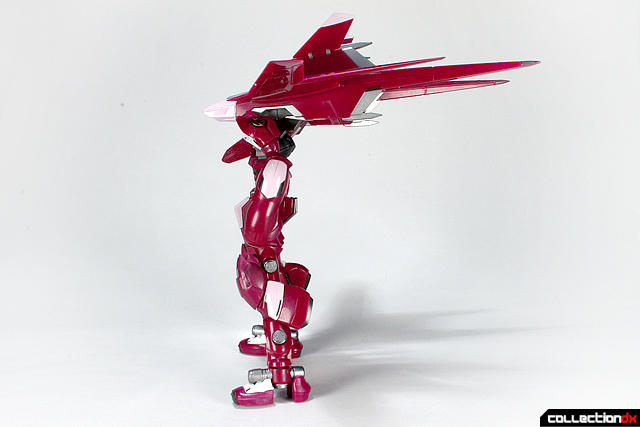 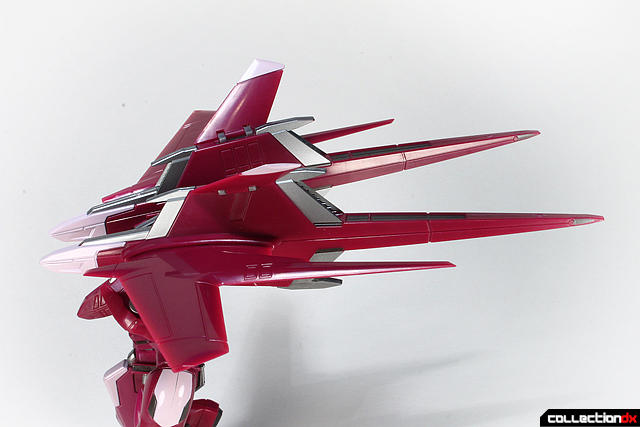 There is a generous amount of accessories/optional parts included with this set. You get alternate hands and this huge sniper rifle which can attach to his shoulder. 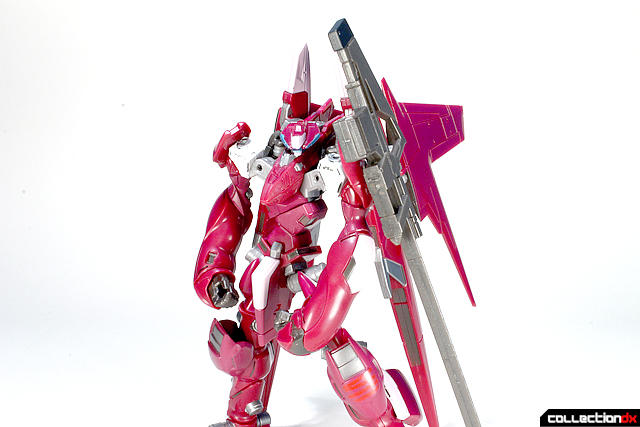 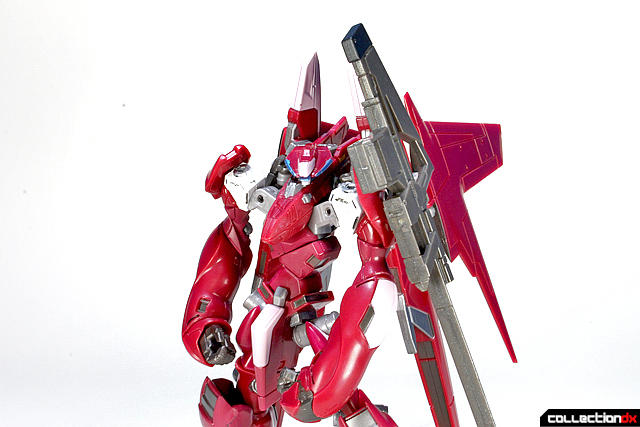 The figure holds the rifle really well with no balance issues. 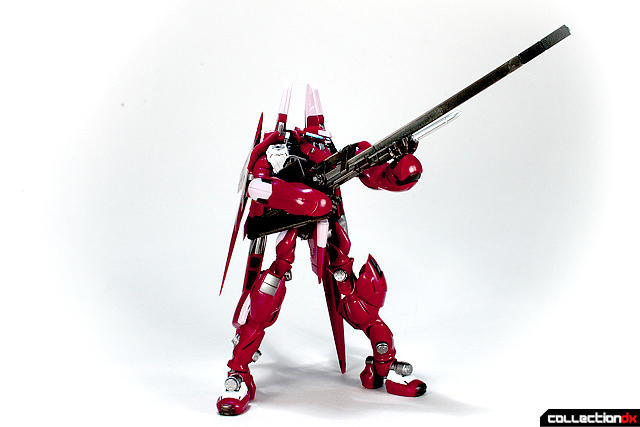 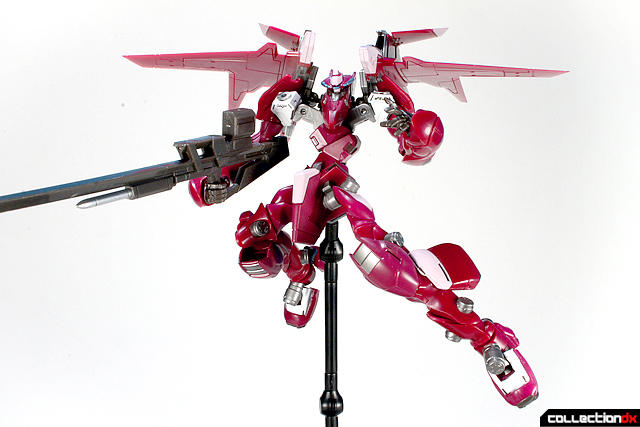 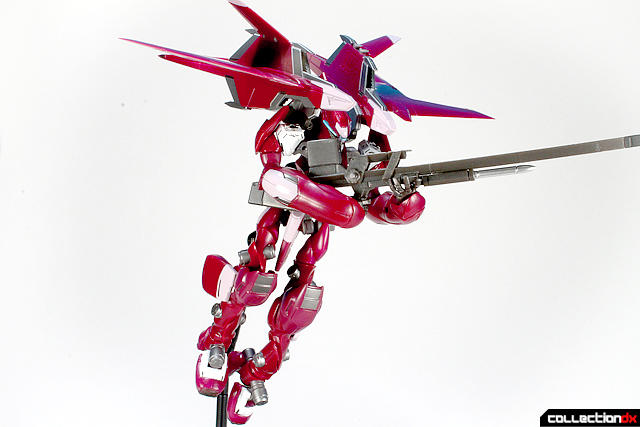 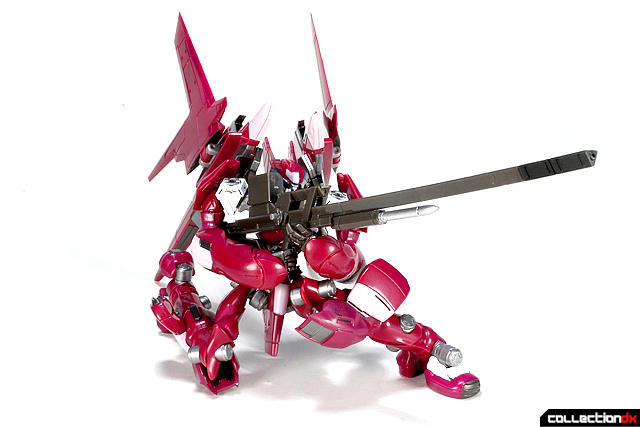 The spike on running long the bottom of the barrel can be swapped out for an extended version that is used as a monopod for shooting accuracy. 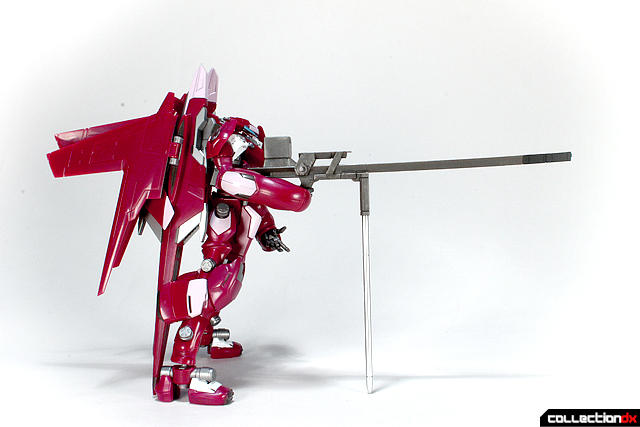 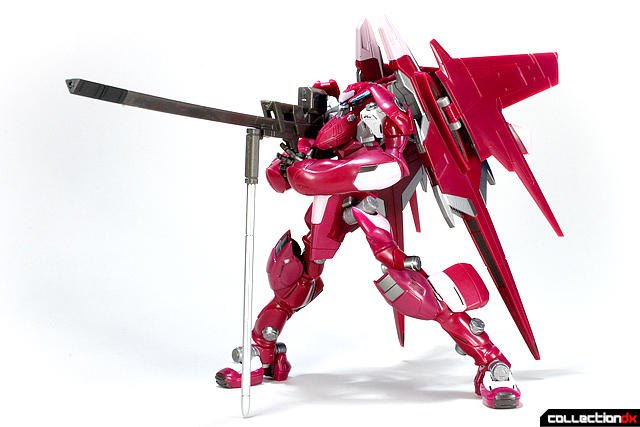 Should you want to recreate the TV Version look, there is an alternate kneecap with the Roman numeral VII. There is also an included "VII" sticker that goes on the figure. 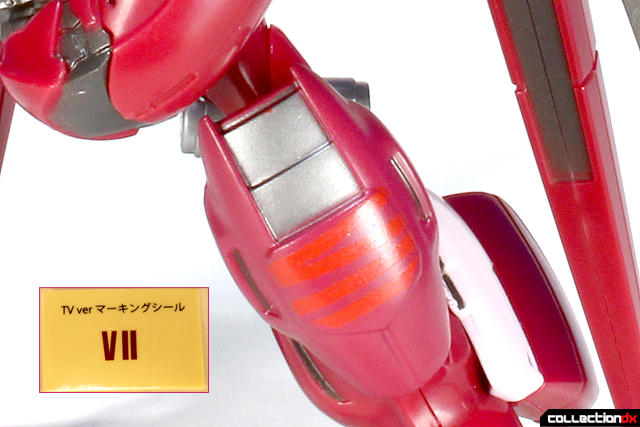 Also included is this blue crystal piece and slide-on barrel piece for the rifle which is used to recreate a scene in the show. To recreate this specific scene, you will need th Fafner Mark Sein which I unfortunately do not have. Basically both robots hold the rifle and their hands are engulfed in this blue crystal. 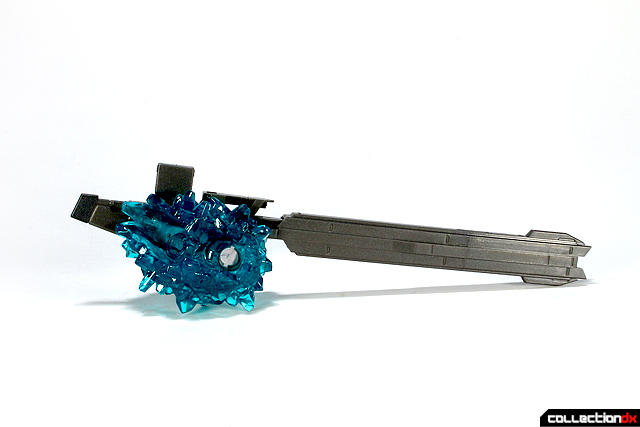 The last bits are replacement wrist pieces which simulate the wrists being extended. The grey area on the wrist is supposed to simulate the inner frame being exposed at the seam. 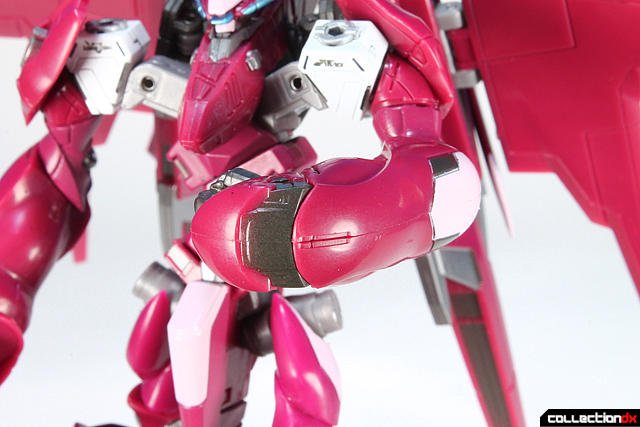 This figure was an interesting experience for an older generation collector like me. I am used to simple basic articulation. At first I was confused at the awkward articulation of the figure but during my "testing" I grew to like it.

The Fafner mechs are all really funky, but in a good way. Never noticed before that the chest is actually asymmetrical like that. That's pretty neat.