OK, so I 'm pretty happy with this last release of the ES Gokin Getter trio. Getter 1 and Getter 2 were really nice and had electronic gimmicks. This third release is simple and nice, but has no electronic gimmick. However, it displays well with his other two friends. It wasn't until I started posing the figure for this review that I realized there were some things I didn't like. It's like waiting a long time to date this really cool cute chick you've had you're eye on for a while, only to find out she has back hair.

Getter 3 comes in the excellent thick cardboard box with chrome number emblazoned on the front. As usual, the design and graphics are great. 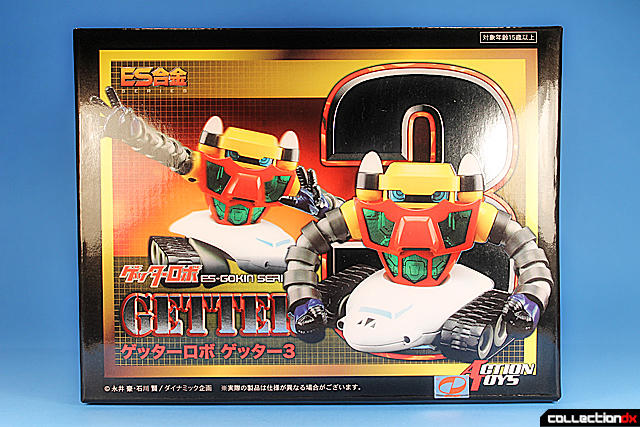 The figure comes in a nice plastic tray. The top level, houses the figure and accessories. The lower tray houses an ES Gokin stand. 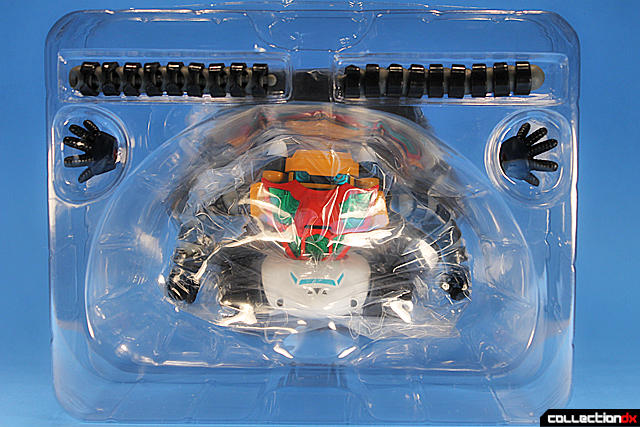 Here he is out of the box. He is rather small, but feels nice due to the amount of diecast. The torso and lower vehicle section is diecast. Paints apps are excellent without defects. Very jewel-like. 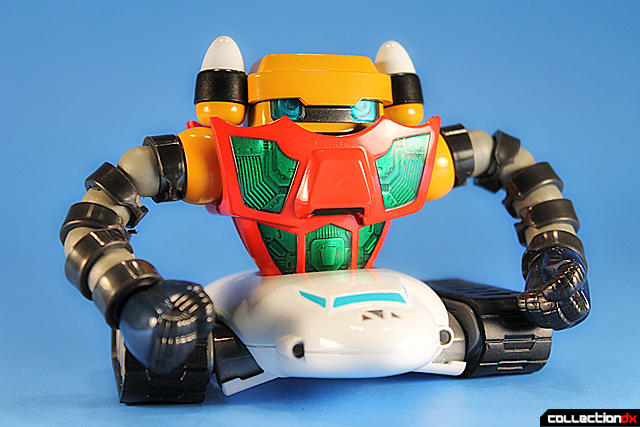 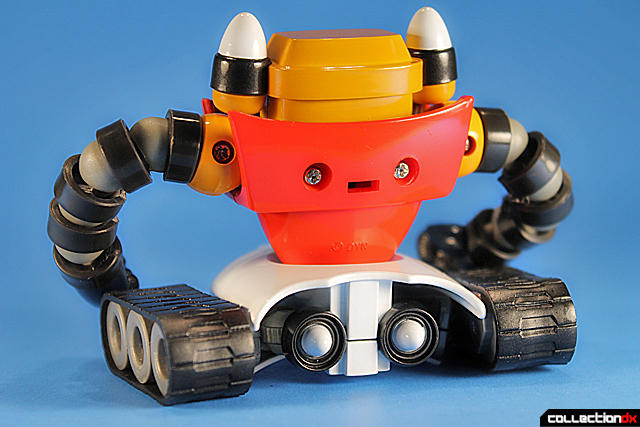 The face has no expression at all. He just has a cool "I'm a robot" kinda look. The head does feature very limited movement side-to-side and up and down. 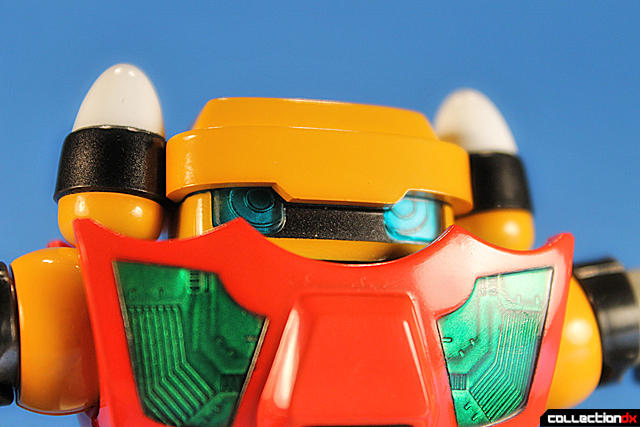 The arms feel somewhat fragile but articulate nicely. A huge surprise for me was the multiple points of articulation for the "legs". I thought his tread sections were stationary but they actually move on joints and can achieve nice poses. However, the actual rubber treads DO NOT roll on the wheels. Either mine are seized or they do not roll. Bummer. 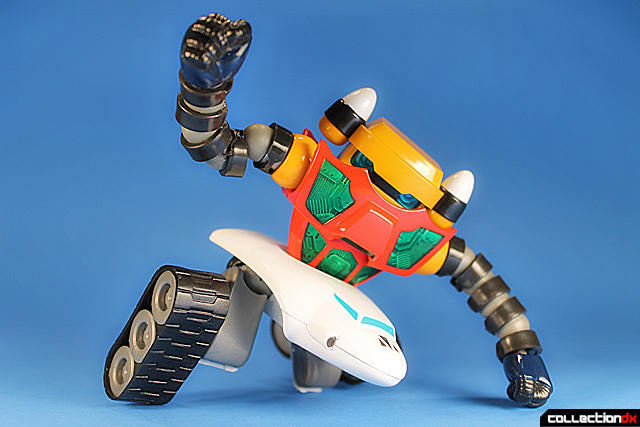 He doesn't actually come with any weapons, but he does at least come with a pair of open hands which are sculpted really nice. 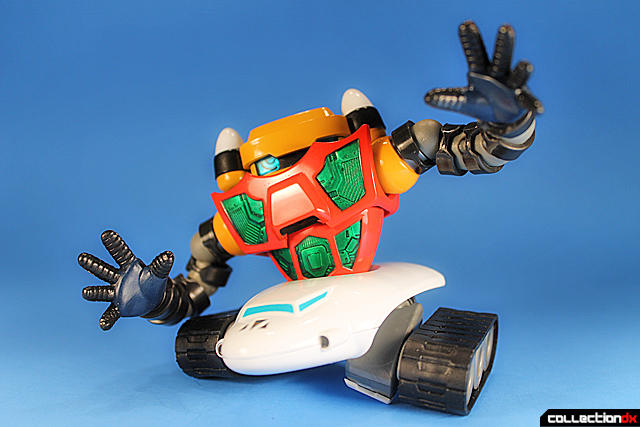 Now here's the part of the date where you find out the chick has back hair. Getter 3 comes with alternate arms which are longer and apparently attach to the normal arms to make them longer. Well, each joint, is a strange type of joint that is unnecessarily complicated and fragile. Constantly falling apart.The plastic used is very soft and almost every joint I looked at has stress marks. You know the type where the plastic turns white? Yeah that kind. I almost gave up attaching and reattaching the arms for the photos because I had to force the ball joints into sockets and watch as the plastic screamed in stressing pain. 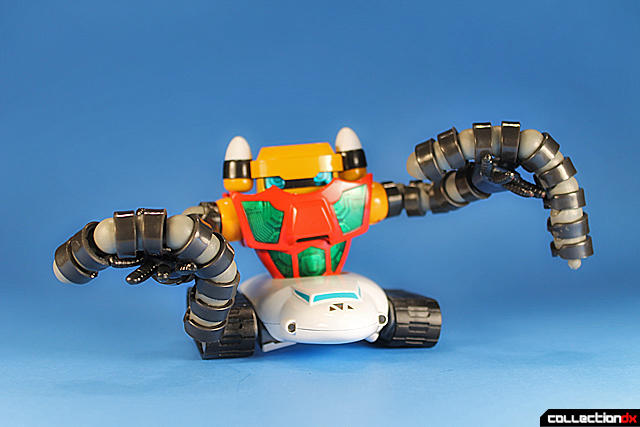 In my efforts to capture a shot of the arms in use, I bit the bullet and attached the arms. Fortunately, nothing broke. However the ball joints actually deformed when being pushed into the sockets. Plastic was actually scooped off the sides of the ball joint when pushed in. However it held for this pose. I understand that Artstorm made these ball joints in this way so that the arms maintain some composure and bend naturally, but I would have been happy with good ol' standard bend-every-which-way ball joints made out of better plastic. 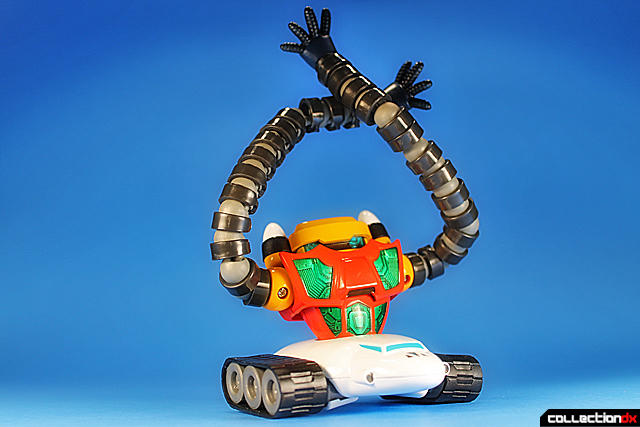 It's pretty cool aside from the "back hair". I just wouldn't bother changing the arms. It's not worth the risk of damaging an otherwise cool figure. I doubt the Getter trio will be reissued anytime soon if at all. So if you don't already own this, be prepared to fork over some good cash for them.

nice review...plastic stress marks are like a girlfriend who ends up being a "crying game" girlfriend...back hair...hell that is why they invented wax....no weapons= back hair to me...maybe some shooting missiles would have been cool

If you already have a weird-ass proportioned giant robo, and then you turn around and add big dreamy eyes and make it into an SD figure, it is INSTANT WIN in my book.

I got no love for any Getter mecha (except the Revoltech Getter Robo 3 I have), but this toy is f***ing adorable! (*chuu*)

I really like the detail behind the transparent windows; nice touch!

Wasn't aware of this series, but it looks interesting.

I like this little guy, but maybe the price for all three will keep me from buying. Especially since I've never watched any of the shows (not really into 70's cartoons).

getter robo did everything gurren lagann did back in the 70's. read the manga on manga fox it's still a great read up to this day

mine is on the way ,so excited... go all of the releases (getter 1 was particularly hard to find...) i expected the hands to flop around but never the joint plastic stress... much less the "back hair" part... : (

hope it doesnt turn me off...

hmm with a username like that I'm not surprised this one is on its way to you. I'm sure you'll like it. Recently a few of my reviews have been prone to some weird "happenings". Figures are falling apart, flopping around etc.

I can only imagine it has something to do with the heat in my little review room. I'm talking HHHOOOTTT. Heat lamps, no AC etc. Maybe it softened the plastic enough to damage it. I dont know. I hope yours is non hairy