In recent years, Takara Tomy has quietly released a handful of dreadful Disney-themed Transformers, a Mickey Mouse/Optimus Prime mashup and a Bumblebee/Donald Duck bot. Being me, I seriously considered buying either one or both of these. But the Chinese bootleggers made my decision easy, combining the two molds into one hideous mutant, and at a cost considerably less than TT’s $70US asking price. Behold, Ducktimus Prime, in Easter Bunny colorway!

This piece is essentially the Mickey Mouse Optimus with the Donald Duck Bumblebee head. And by “essentially,” I mean “precisely”. While the Japanese language reviews (which deluded American would possibly buy such a thing?) left me ambivalent about the execution of the Disney-formers, this incarnation thankfully assures me my money was best spent elsewhere. I certainly appreciate the whimsy, but even in bootleg form I’m able to extrapolate the supreme lameness of the original(s).

This particular specimen arrived on an anonymous blister card. I didn’t bother keeping the thing. While it was packaged in bot form, I’ll keep the suspense alive by examining the truck form first. I was surprised at just how small it was. Given the retail asking price, I would’ve assumed a larger piece. As it is, Ducktimus is exceedingly small, about three inches long by two inches high.

While some of the original fit and detailing has naturally been lost, it’s a clunky if amusing sculpt, cartoonish in its proportion. 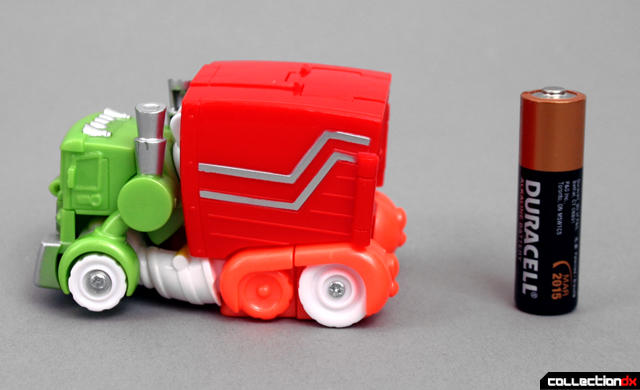 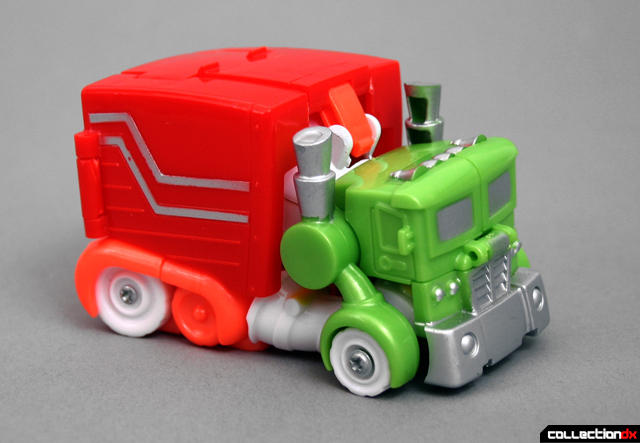 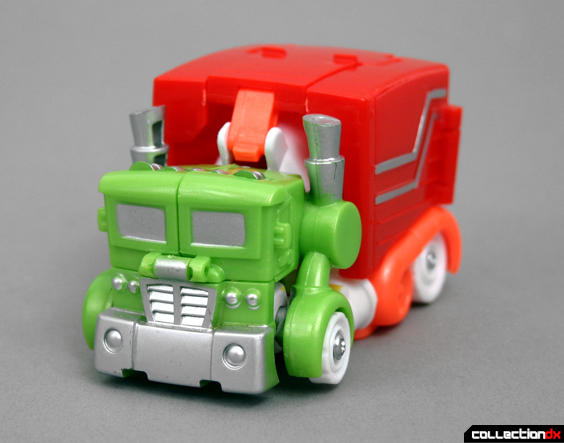 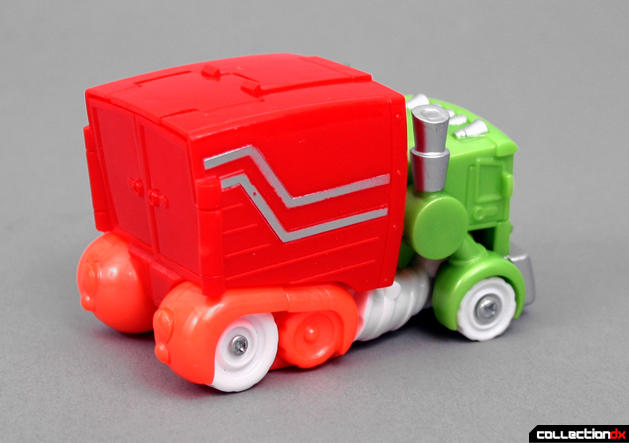 Transformation, such as it is, is simple and intuitive. 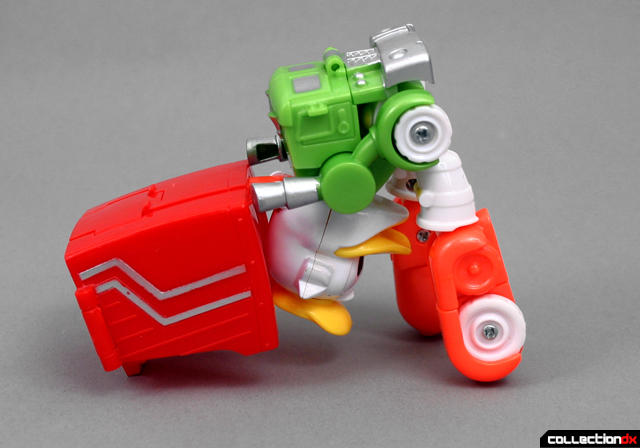 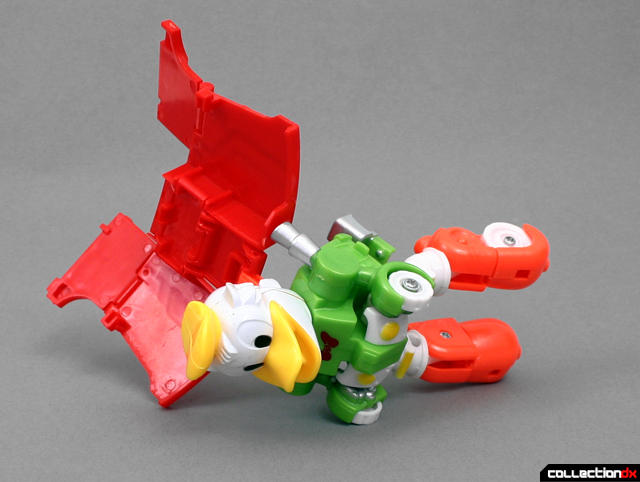 Ah, but then you are left with the Duckbot. Gaze upon it, ye mortals! 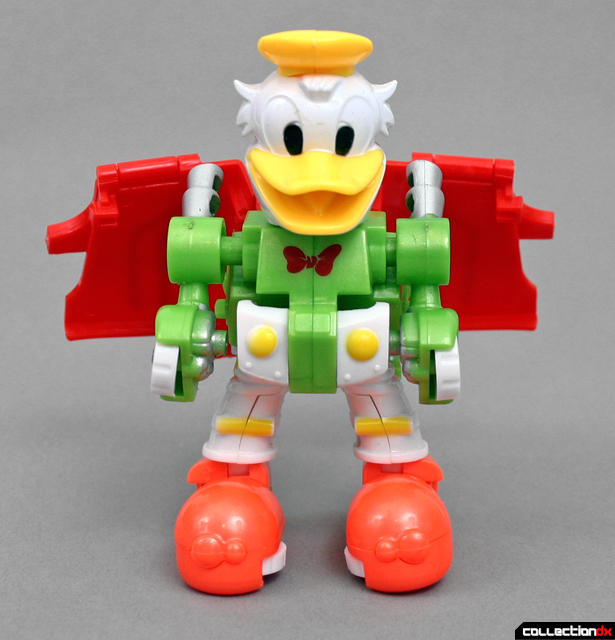 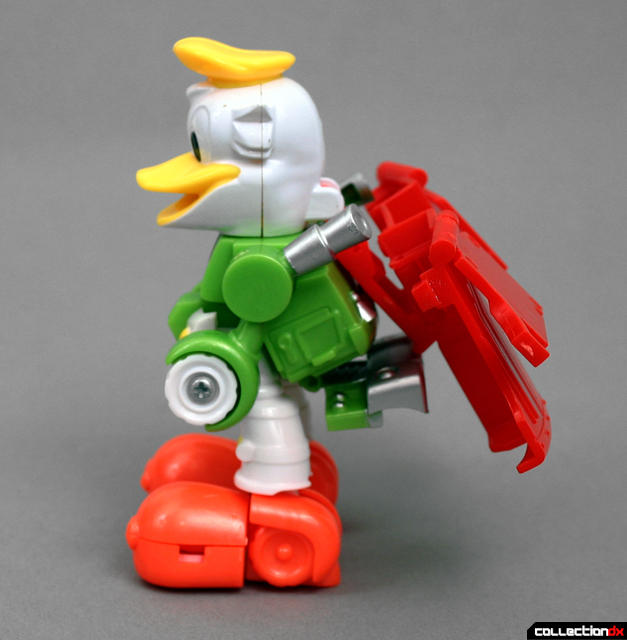 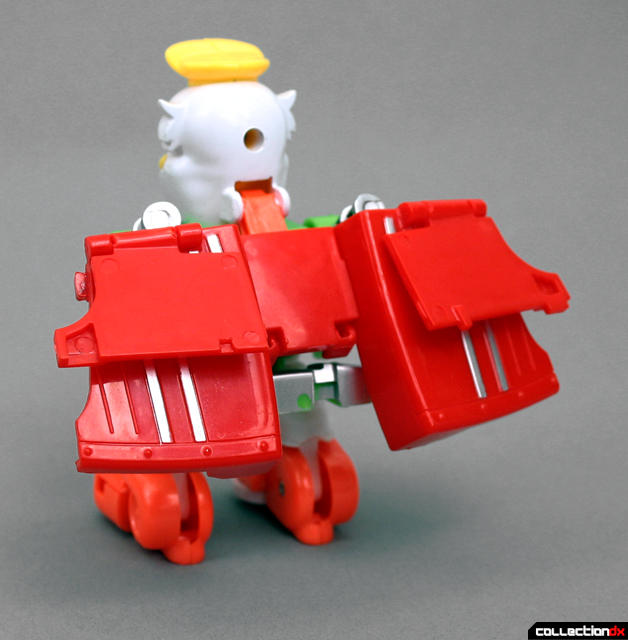 Articulation is bare. The arms remain in their vehicle mode position, but pull out slightly. The big goofy head moves, but no matter. The toy is a brick. And I needn’t comment on the bootleg-level paint apps and finish. 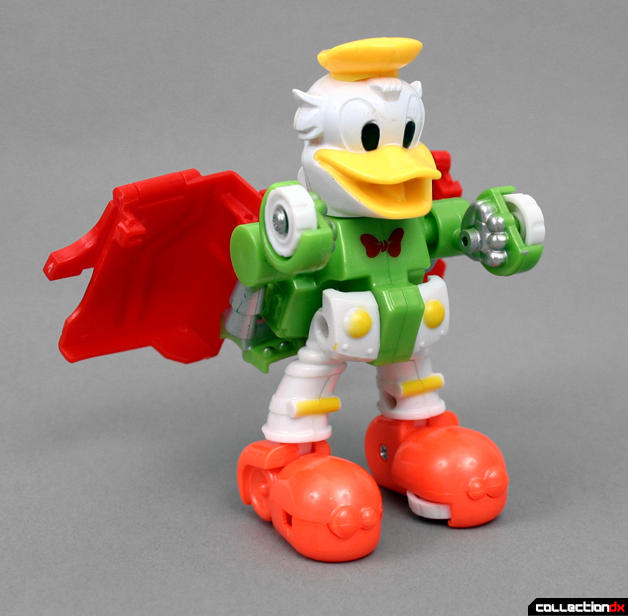 I love the silly duck head contrasted with a cartoonish Optimus sculpt. And it goes without saying that the colors are sublime. This bootleg is available in many colorways, but I picked the ugliest.

This ugly mutant possesses considerable charm. I feel bad for anyone who paid retail for the original, charmless lamebots from which it is derived.

Can't really agree with the appraisal of the original Disney Transformers.

While this is clearly a toy, the originals are really transforming novelties for your desk or shelf. I have all three molds (including Buzz Lightyear) , please shed no tears for me, and they are admittedly not the most posable figures in the world or come with any accessories (unless you count the Buzz headmaster) but they are fun and a totally unexpected blend between the TF universe and Disney.

The overall plastic quality is good and the Bumblebee/Donald Duck is far far superior and complex in transformation to this KO. this is also a totally err 'unique' head - the Donald Duck bumblebee head is totally different, has a button to move the beak and a spring loaded Donald rider to pop out of his head. I was hoping for a Goofy Ironhide actually but i think Takara are turning their weird transformers attention to Hello Kitty now.

I would say this is the waste of time