A hate-filled, fury guided, and begrudging Cure, Dark Precure is the premier and black-clad member of the Desert Apostle troupe. The strongest and most deadly of the Apostles, she fights to destroy the Heartcatch Precures and make the word a desert for the mighty Dune. She also harbors a special hatred for Cure Moonlight…

With this, Megahouse gives us the Excellent Model Dark Precure statuette from the Toei Magical Girl show entitled Heartcatch: Precure! As with their other such releases, Megahouse has done an immaculate job capturing the character into a statuette.

Packaging:
Dark Precure comes in a huge box with a miasma of black and purple diamonds upon it. A very stunning display, indeed, especially with Dark Precure’s hateful stare emanating from its depths. 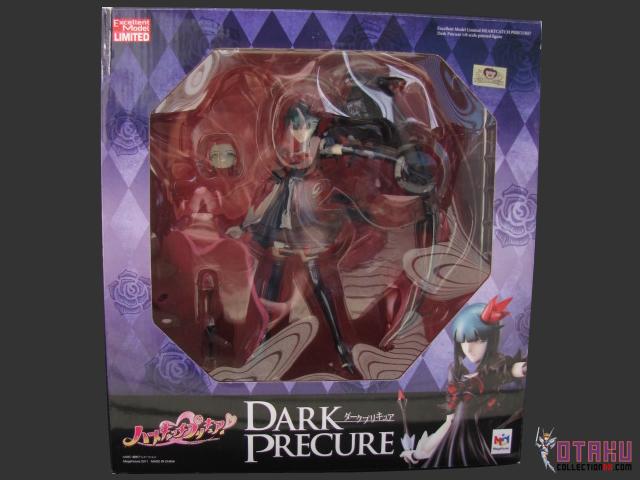 The back is swathed with characters (that most likely say something cool or important) and pictures of the figure inside showing off how good it looks. 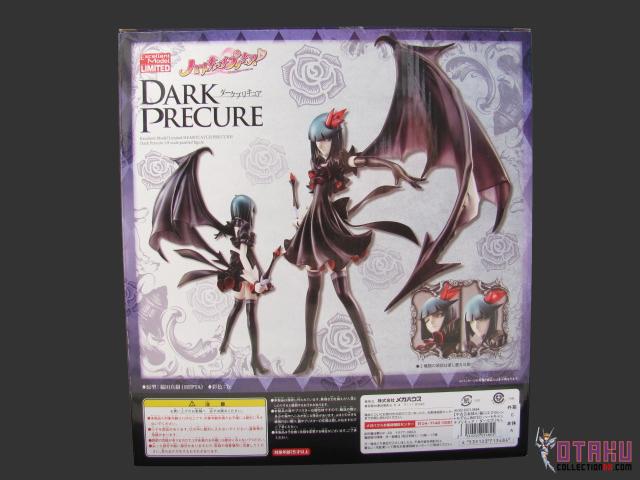 Aesthetics:
I could give you a list of adjectives that would describe this figure, but we would be here all day. I can safely say, however, that this statuette in the realm of being deistic; I’ve seen some statues in my life, but this is everything. This statuette not only perfectly emulates the character design from the show, but also emulates Umakoshi’s art style. All the angles and lankiness are present, and it’s beautiful. 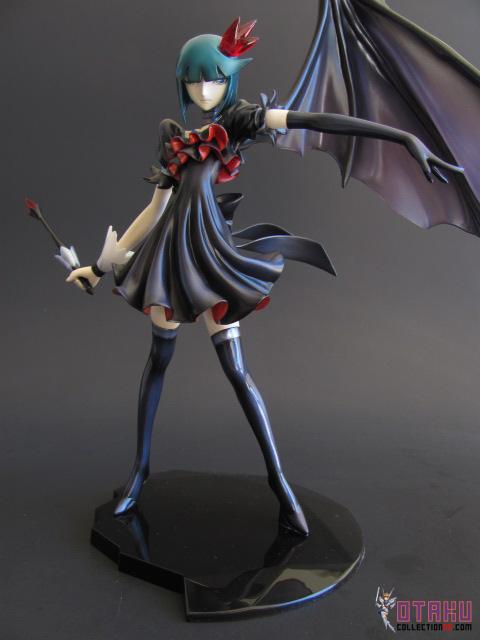 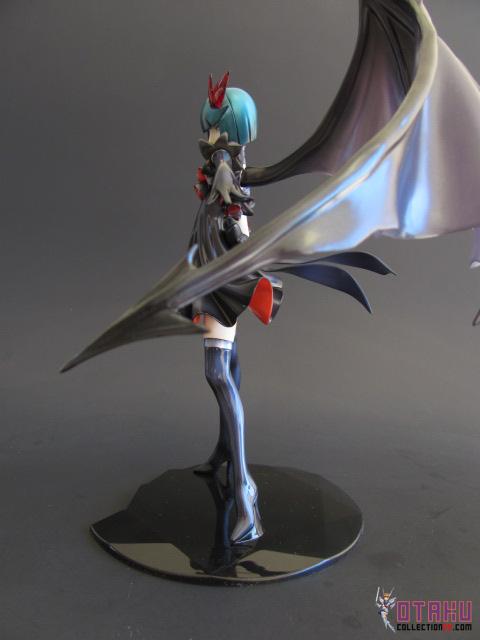 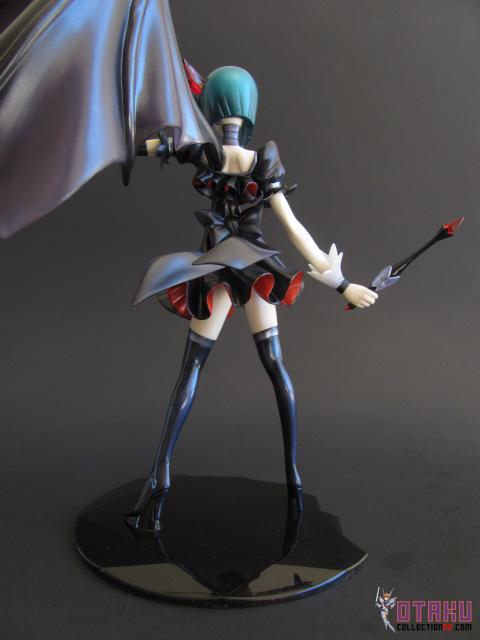 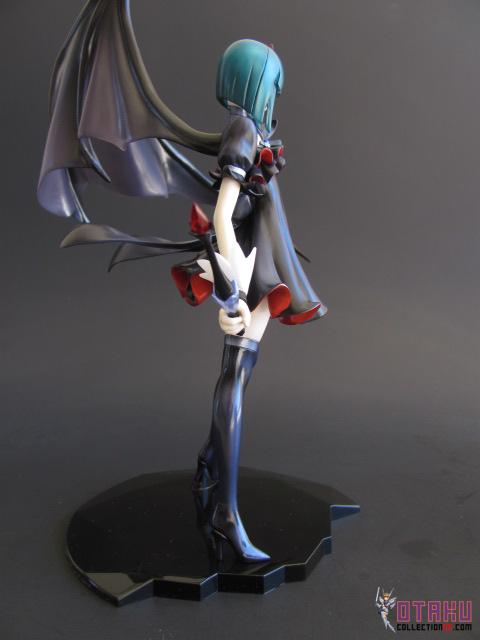 The detail on Dark Precure is to an obsessive degree. Her dress and bow are sculpted as to be blowing in the wind, and her overall sculpt moves in that direction giving her a type of flow; this is nice to see as it makes the figure feel almost “themed,” for lack of a better word. 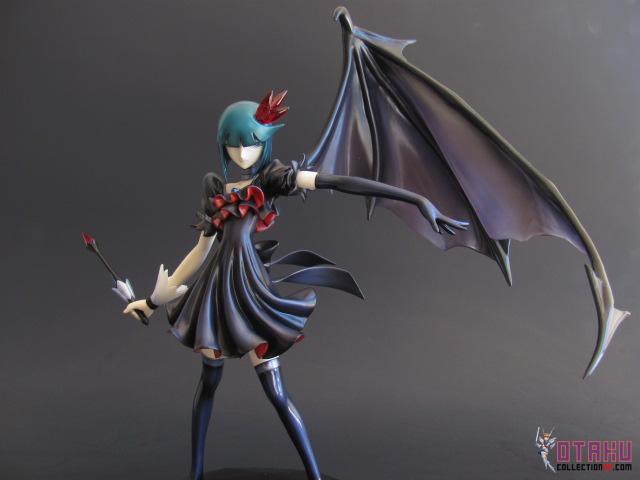 Being more simplistic in her design, Dark Precure doesn’t have as many details concerning her suit, but what is there is well done. Her shoulder puffs are pressed and mushed in places to create the illusion of fabric; her chest fringe is tousled; and her bow looks as is if were actually tied and then melted into place. 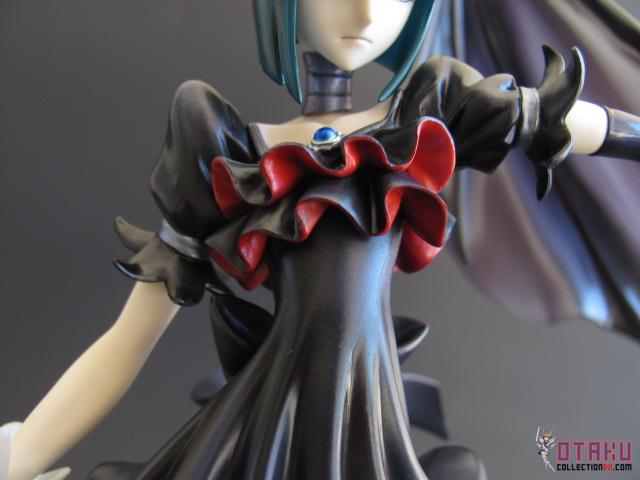 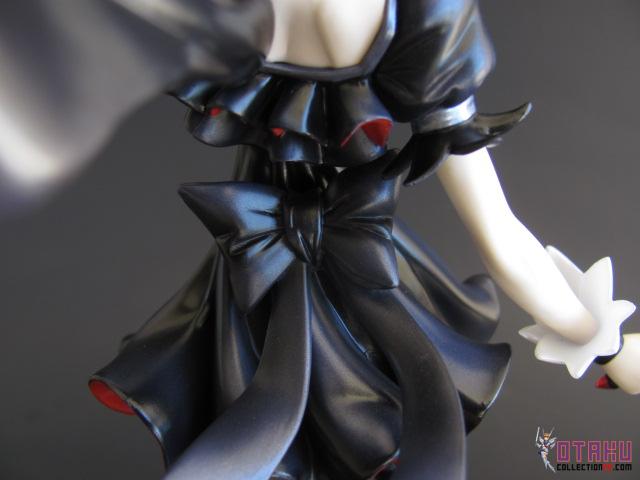 Going to the extreme, Dark Precure sports bodily sculpted detail as well. Her collar bones, shoulder blades, elbows, and pseudo-muscle structures are present and work well into making this statuette feel alive. Nothing has been left out here; every expense was given to this figure. 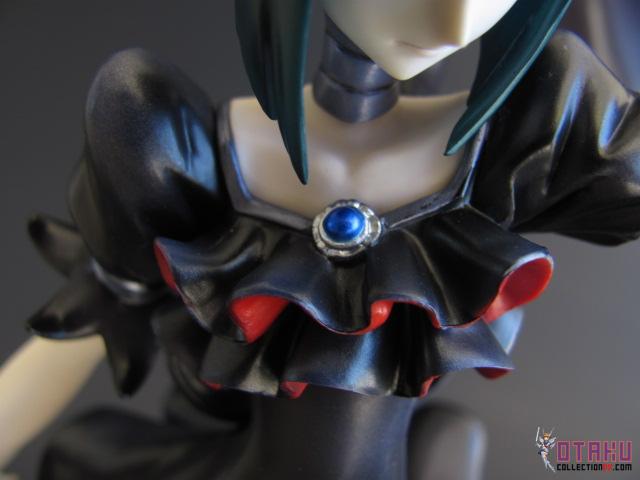 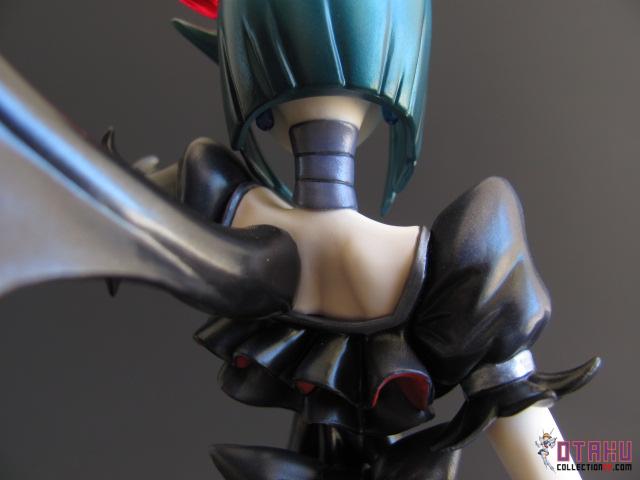 One thing that I greatly appreciate about this figure is what goes on underneath her dress (I promise it’s nothing pervy or dirty). Dark Precure’s sculpt continues well up into her dress and is given the same amount of detail and love (man, that sounds wrong). It would have been too easy to just stop the sculpt where you wouldn’t see anything, but this figure goes until it physically cannot continue. This just speaks volumes about the amount of heart that went into this figure. To put this into perspective, I think she has a belly-button.
I mean, holy crap.

Another thing that I appreciate about this aspect is that it’s also kept conservative and clean. Dark Precure sports a plain blakc pair of bikini-cut panties that are there to simply cover her private parts; they do not accentuate any of those parts or show anything off.
Great job, Megahouse. 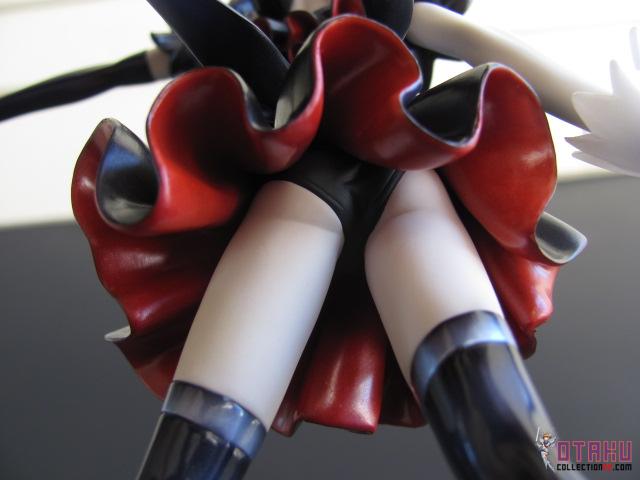 It feels a little off-color to post a picture of it, but alas…

The paint apps upon this statuette are outstanding as well. Everything is expertly applied and clean. The red of her suit is deep and almost blood-like. Her suit is a mixture of black, insanely dark purple, and purple. The purple helps make the suit feel magical and ethereal, that there is some mystical aura about it. 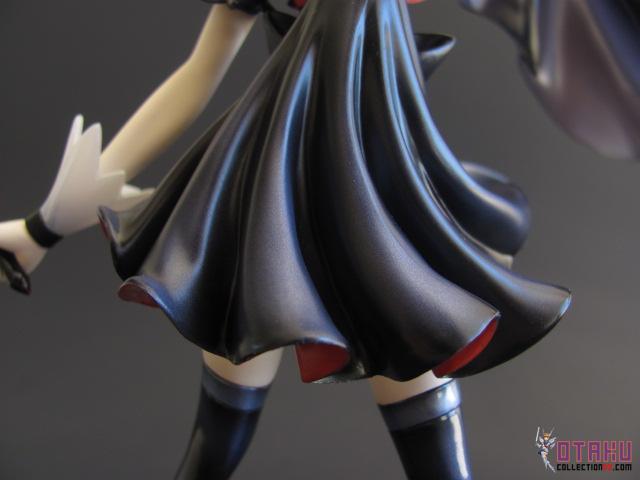 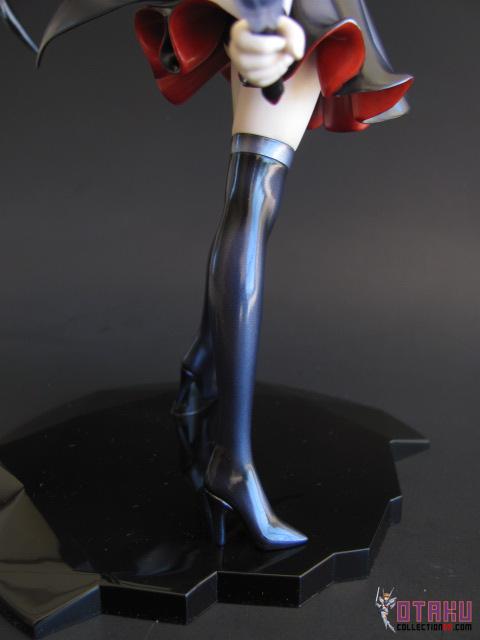 Articulation:
She’s a statue; there isn’t any.
Dark Precure stands eight inches tall to the top of her head and reaches almost ten inches with the inclusion of her wing. She is also ten inches wide. 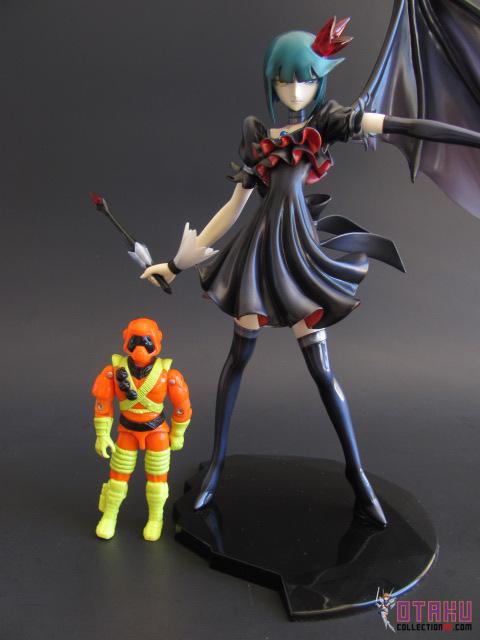 She is made from solid PVC and is quite hefty because of it. She is a solid build with only slight flexibility in her arms—be careful when adding the Dark Tact to her hand.

She scales well with the other figures from the line as well. 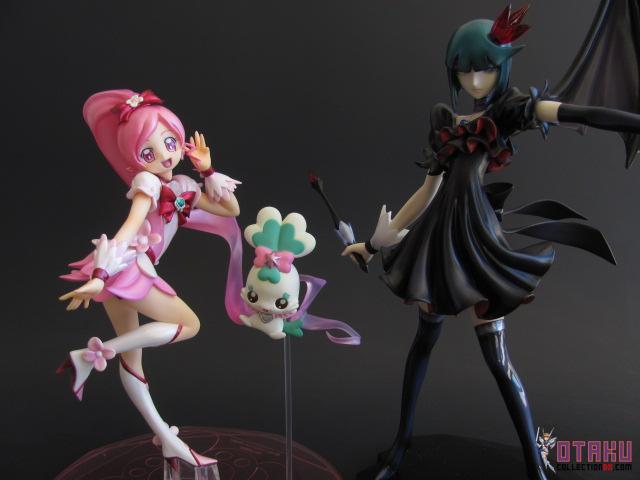 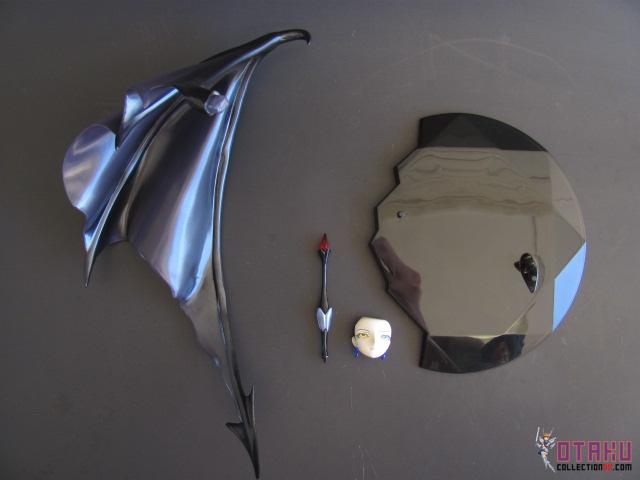 Her stand resembles the fractured remains of Cure Moonlight’s heart seed. I love that they did it this way, as it is an integral part of her character... and just plain awesome. 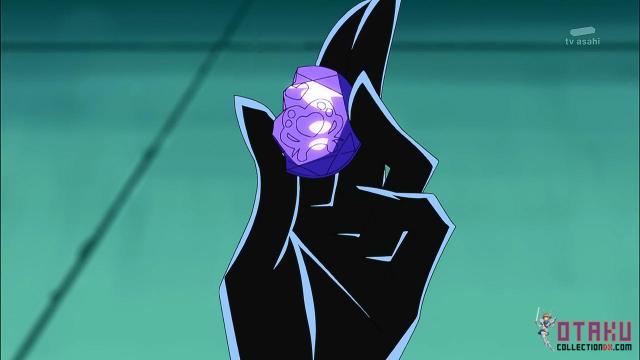 Her Dark Tact is given the same amount of detail. 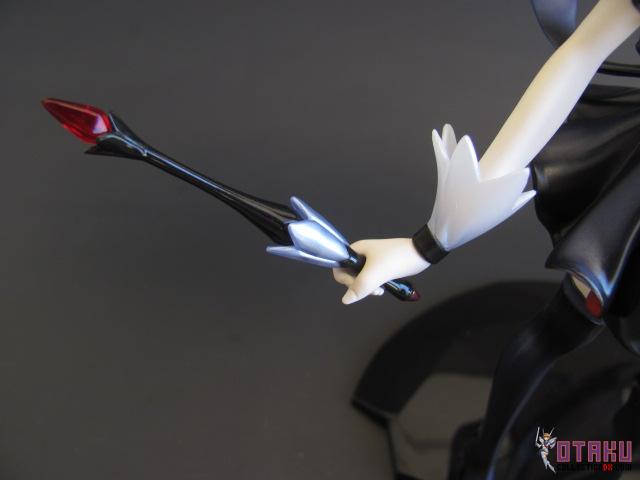 Her wing is made from a harder plastic that is dark purple and translucent; it’s eerie when the light shines through it. Barbs are present and are actually spiky. 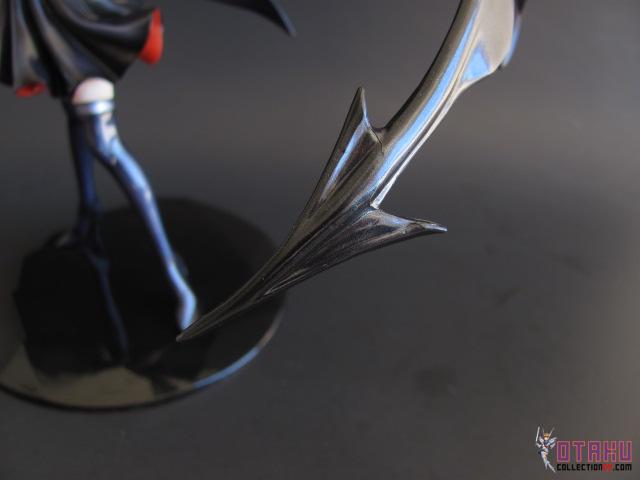 Her other face is one with both eyes open. In the show, she keeps her right eye closed to keep its power at bay. This alternate face—as well as the other—perfectly encapsulates the hatred expressed by this character; the first time I saw it, I had chills. It’s placid, yes, but you can just feel the seething hatred underneath. 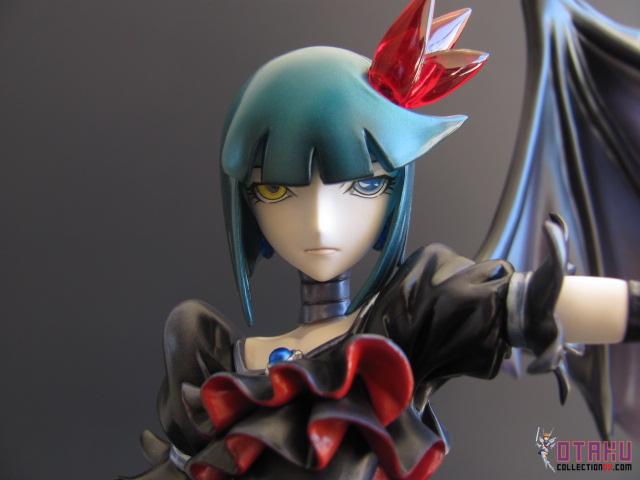 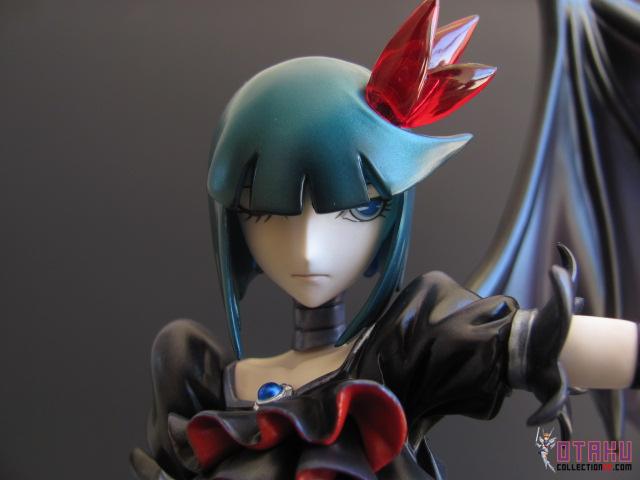 You change the faces out by removing the hair that is held in place via pegs and slots. 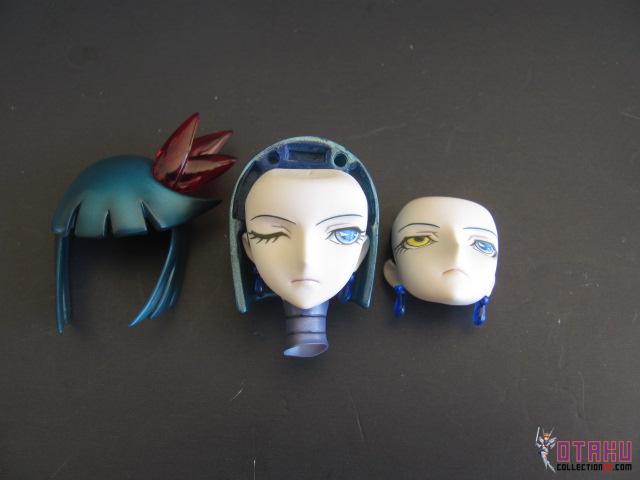 Gimmicks:
None, unless you count being extremely photogenic a gimmick. 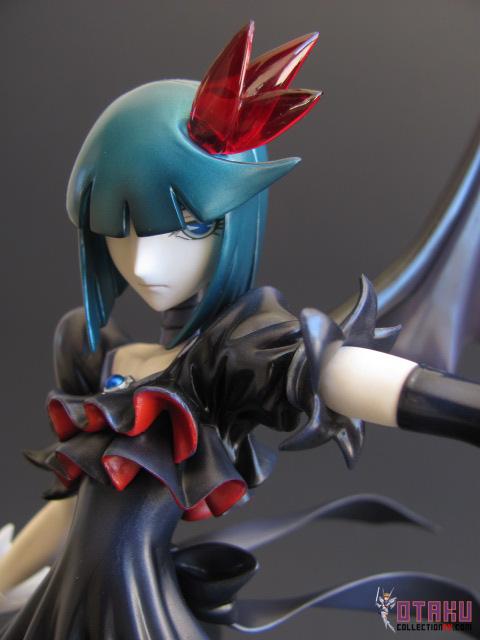 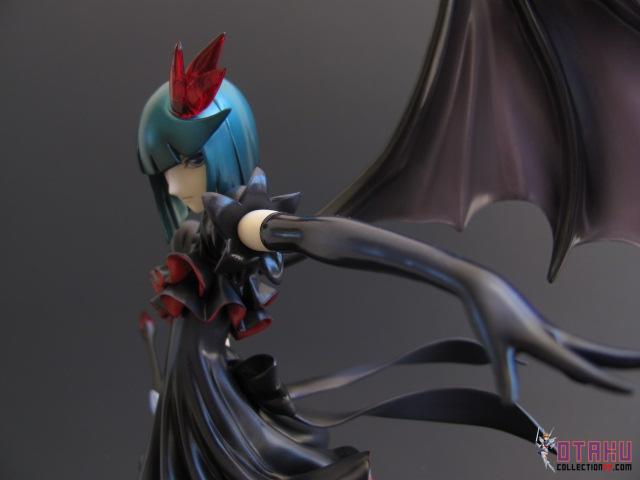 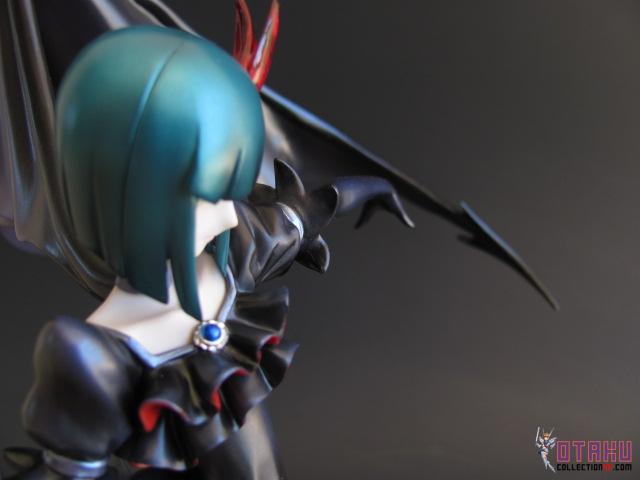 Closing Remarks:
Dark Precure is an excellent character, one that is deep beyond your very imagination. This statuette perfectly captures and emulates her character and character design; she’s slick, angular, and brimming with anger. With the extravagant attention to detail and mind-blowing sculpt, I highly suggest this figure if you like the show, her character, or simply the figure itself… it you can afford it, at least. Being of the Limited series, Dark Precure is very hard to find and, when you do find her, quite expensive; however, she is absolutely worth it.