Sometimes a model kit comes along and kicks you in the arse. Well not exactly the building of this Kotobukiya’s Border Breaks Cougar model kit but the demanding pro custom paint that this kit requires to finish it. Usually here at CDX the turn around time allowed to review a promotional kit or toy is about two weeks and usually I can complete a kit in around three weeks and review it for the site. More than eight months later I am finished with the kit and finally able to present you with a review. 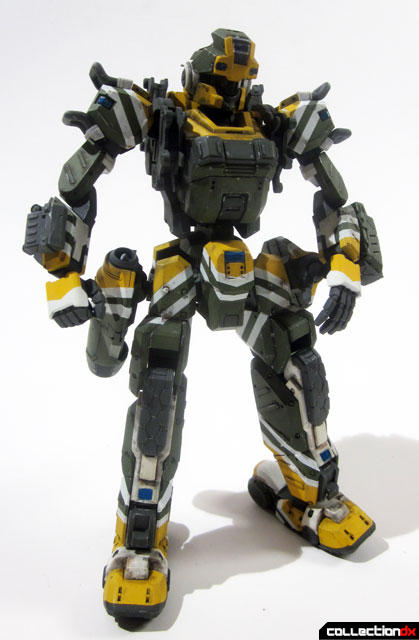 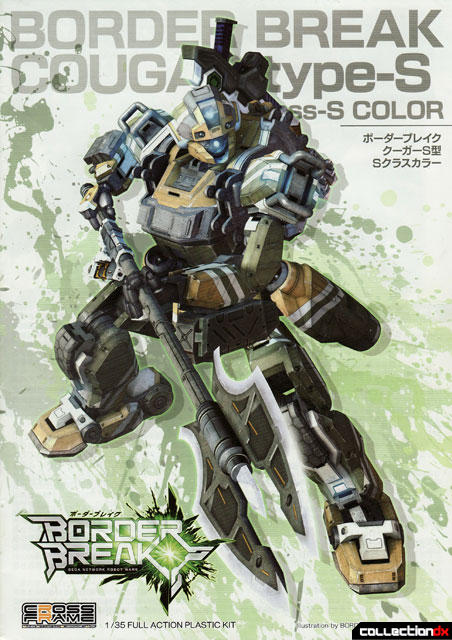 I have wanted to build these Border Breaks kits for a while now, especially after Prometheum5’s wonderful build and review of the Border Breaks Cougar Type-1 kit here on CDX. I do not know anything about the video game these kits are based off of but I was absolutely entranced with the real world robot designs of these robots featured in the video game. The design has a lot of great surface features that beg for the model kit to be weathered. 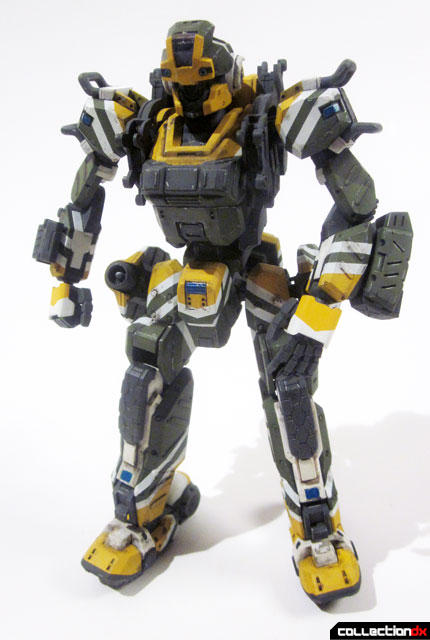 Also being a big fan of High Grade kits by Bandai I was curious how Kotobukiya was going to handle a similar designed kit especially in light of the complex green, yellow and white colors throughout. Little did I know this would be the most demanding and time-consuming paint job I have ever finished for a model kit. 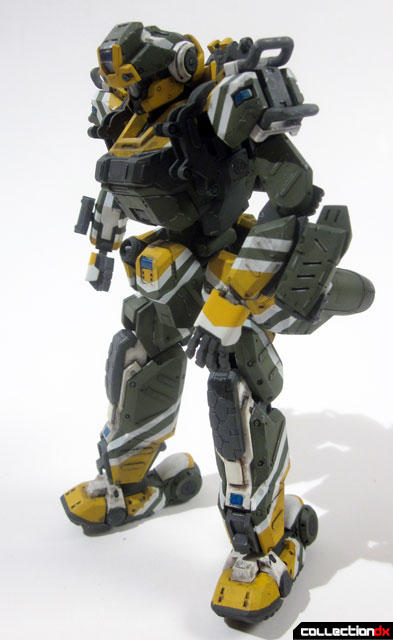 The Kotobukiya Border Breaks Cougar Type-S kit comes boxed and water slide decals are included for the white stripes. Options also include various hands and extensions for the engines on the hips. Since this kit is based off another kit, extra weapons are included, including a sword and two guns. Upon opening the kit I was presented with beautiful and finely molded parts colored in dark green plastic. Unlike a High Grade kit, parts were not molded in the various colors of the paint scheme, a fact that Kotobukiya clearly states on the side of the box. 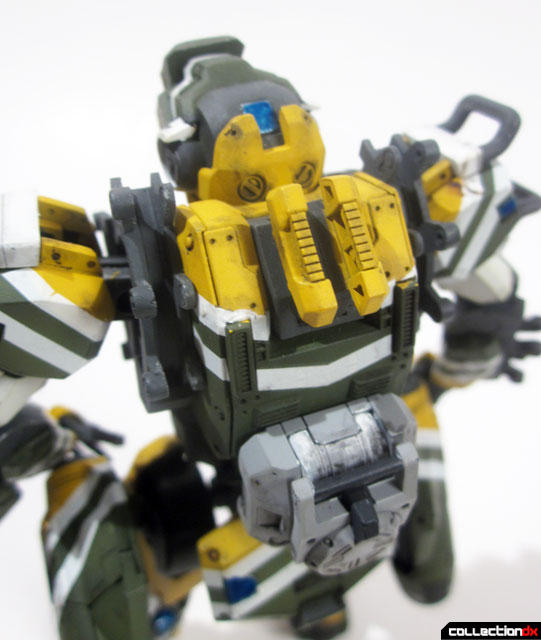 It was at that moment that I realized this was not going to be an easy kit to paint. I could have easily built it out of the box without painting the kit but that would not have presented the kit to our readers it the best way possible, as Kotobukiya would have wanted. After a few weeks of thinking out how I was going to paint the kit I started the kit. 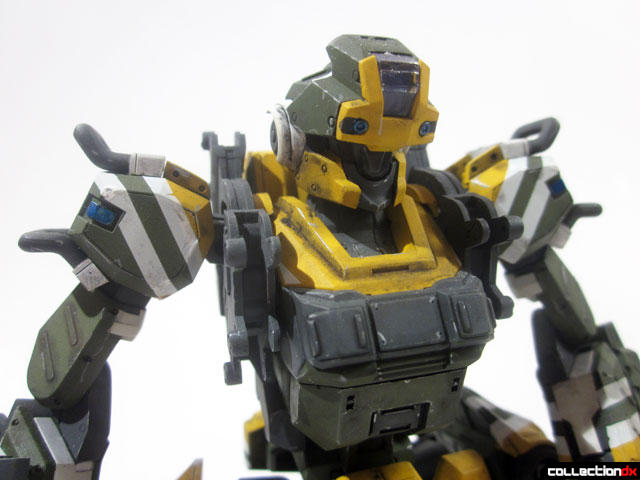 Since there are so many parts that need to be painted, organization is needed when cutting off and preparing the many parts before paint and assembly. I used zip lock bags that are used for action figures to place all the parts for the particular limb. For example I had about seven bags of parts for left arm, right arm, left leg, right leg, body, weapons and other odds and ends. I had another bag for all the extra parts that are not used in the kit. Things can easily get mixed around if organization is not done at this step.

The next step is preparing the parts. That includes seam-scraping, putty, gluing and sanding the parts that need to be done before painting. This is really when the model is being built as after painting the only step that needs to be done is putting the limbs together and adding the parts to the body. 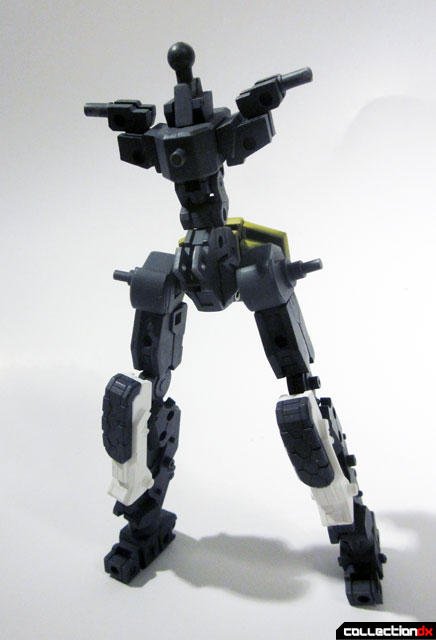 Just like most current mecha model kits, one begins this kit by building up the skeleton that one places the armor on. I use Florquil railroad lacquer paints for the grey on the skeleton. Although it takes a few days to dry it dries to a durable surface so the parts will hold up to the rigors of moving and snapping parts and I also find
paints adheres to soft plastics the best. 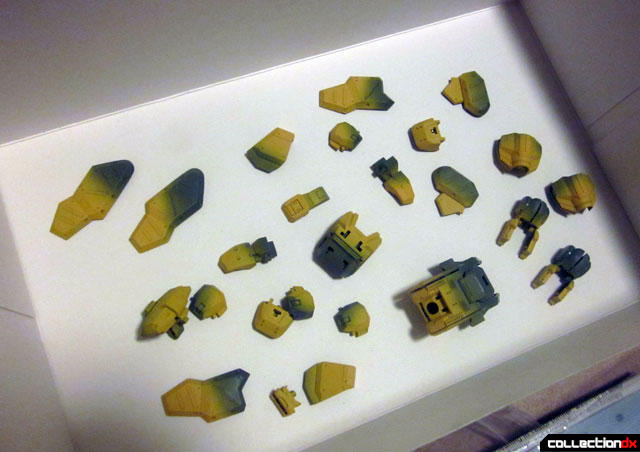 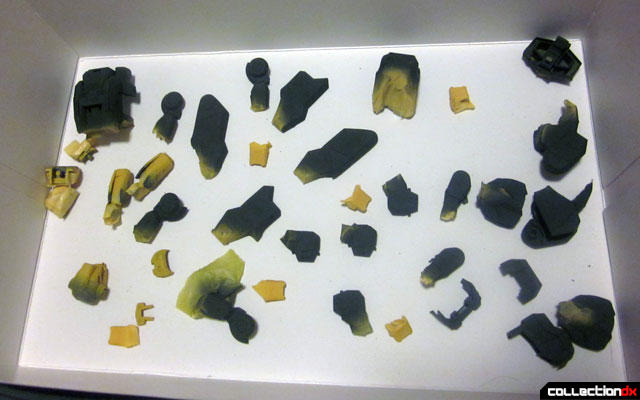 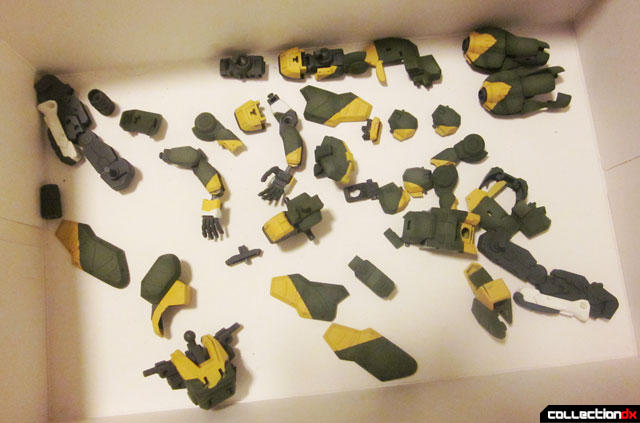 The only part that needed to be assembled before the multi levels of paints is the heels, white shins, head and forearms. Most of the other parts can be snapped together after paint. One issue I had was that the kit did not come with any type of a clear gem for the “eye” of the robot. You can see through the clear parts provided so I decided to use some spare shiny blue vinyl material I had to glue underneath the lens. A sheet of shiny sticker material would be a great addition to future releases of these kits. 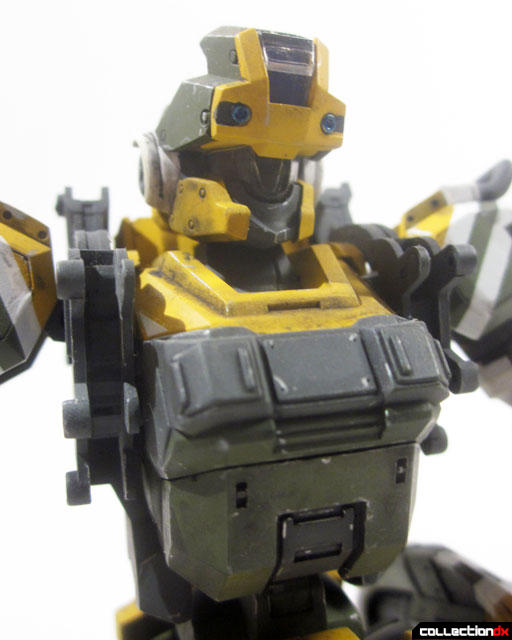 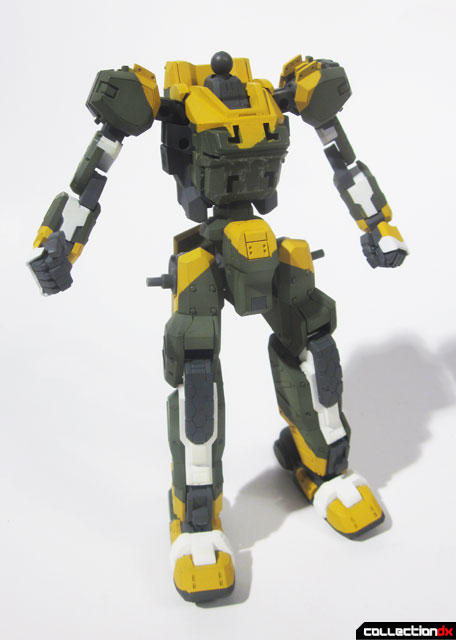 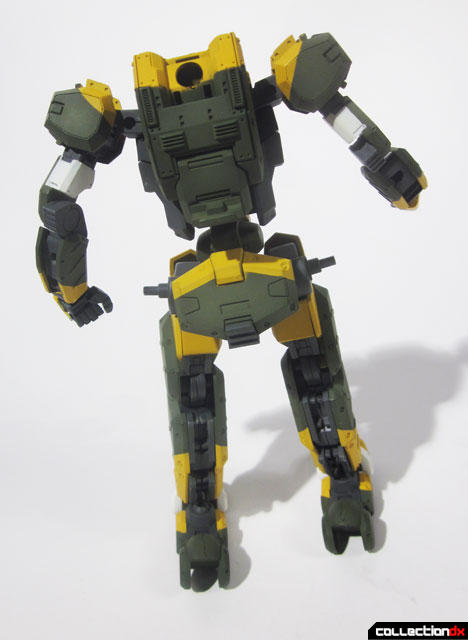 There are many layers of multi level masks when painting this kit. Also the angle of the paint lines must be correct as the decals are angled in specific degree that covers the separation line of the paint. This can get tricky especially when dealing the leg and thigh area of the kit. Keep in mind that you should have a lot of Tamiya yellow modeling tape as much is needed to complete the painting of the kit.

The first color I laid down was Tamiya white. This color was taped off. Since Tamiya colors tend to be opaque, I decided to use Testors’ Model Master yellow as it is a thicker paint and covers the dark green of the plastic. Then any grey that was not painted earlier is then painted. All the parts are taped off and finally the Tamiya green is painted on. While this only paragraph makes it seem like a quick paint, it took me under two months to paint these steps and repaint any touchups that I had missed. 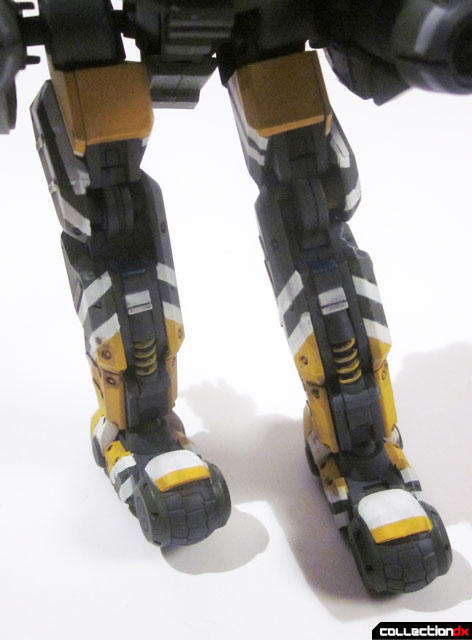 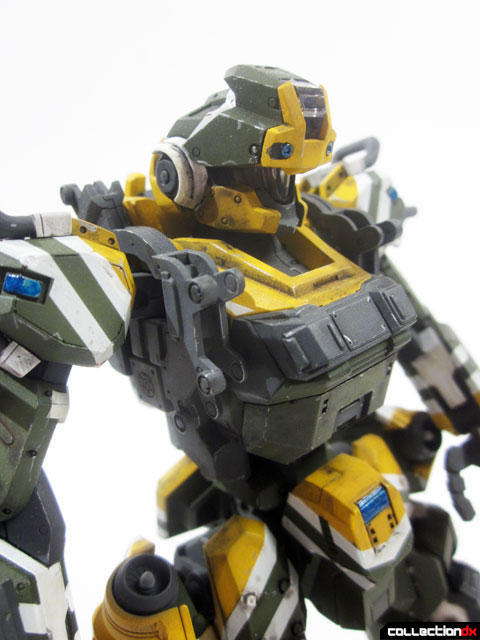 There are two big issues that deal with the painting of this kit; one is the legs and the other the body. The leg panels can easily be mixed up so great care is needed when masking off this area. The second is there is no real clear reference picture of the body/backpack area and the modeler has to make a guess on how it is painted. 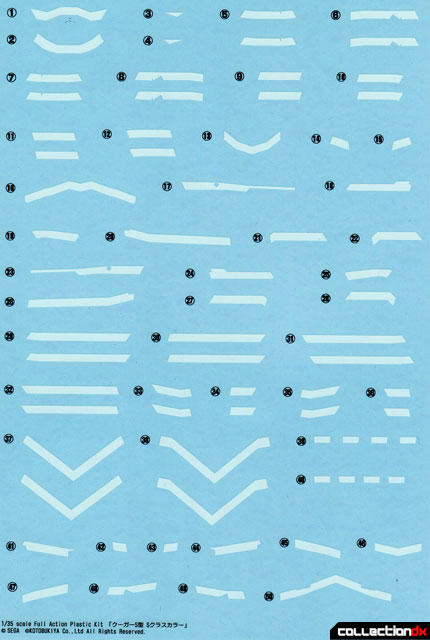 Once the paint had dried I painted a Testors’ gloss coat for the decals. Now when you think the hard work was finally finished, I realized the hard work had just begun. One decal sheet of fifty white stripes is included and applying the decals took over a week to do as they all had to be placed in the correct position. All the decals are not lined up perfectly on my example when I finished but a perfectionist might want to take a little longer. Because of the many layers of paints and decals not exactly lining up, a lot of hand brushed touch up is required before the final flat coat. 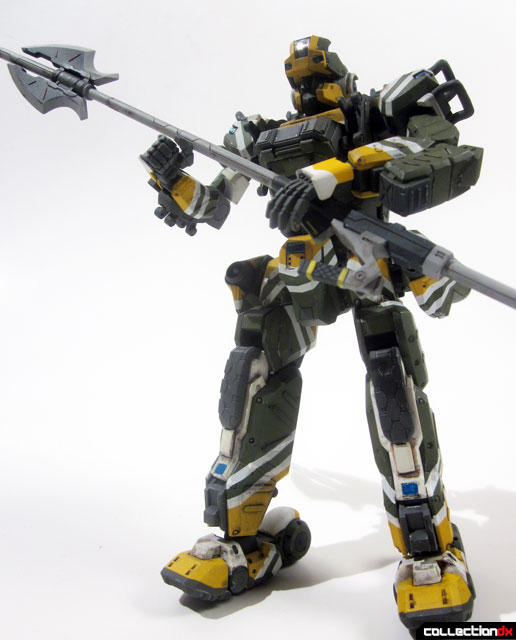 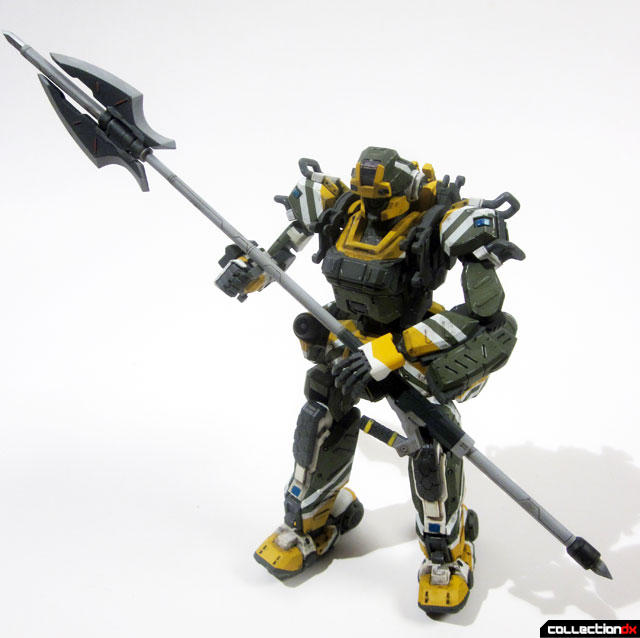 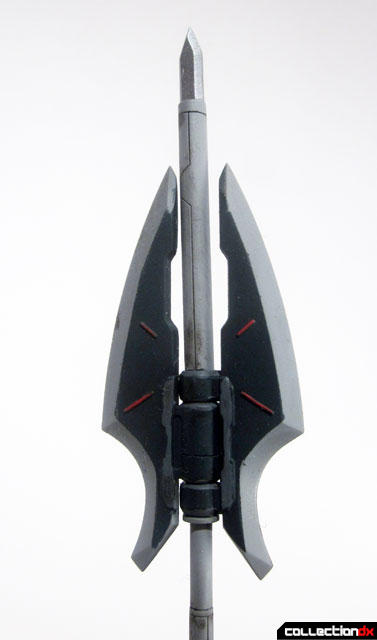 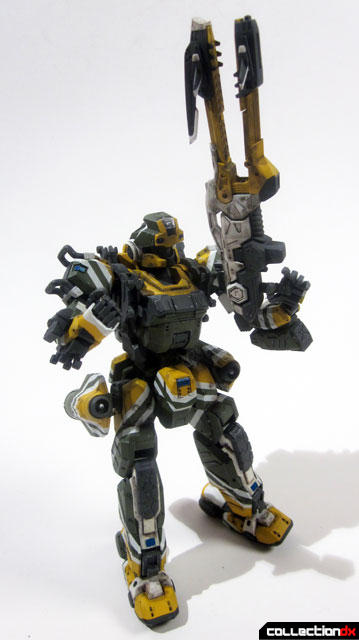 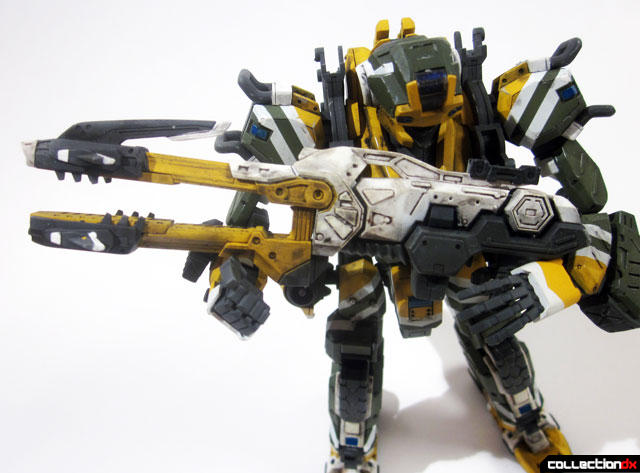 After a Testors’ flat-coat I let the paint and decals dry overnight. I finally assembled the model and added my usual touch ups of brown and black thinned oil paints and a silver pencil to make the kit worn and realistic.

The weapons were built like traditional model kits and were one colored. These ended up being some of the most difficult parts to paint, as there were a lot of compound curves. The laser cannon can be built open and closed and the ax can be built extended or retracted. Extra weapons were also included which were a sword and two mini machine guns. These can be snapped onto the shoulder and forearm area for storage. 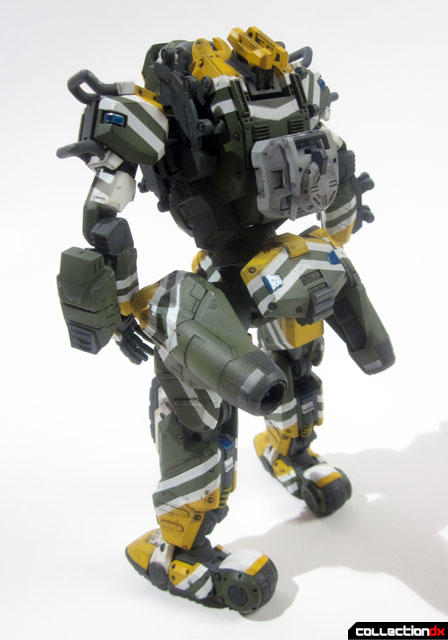 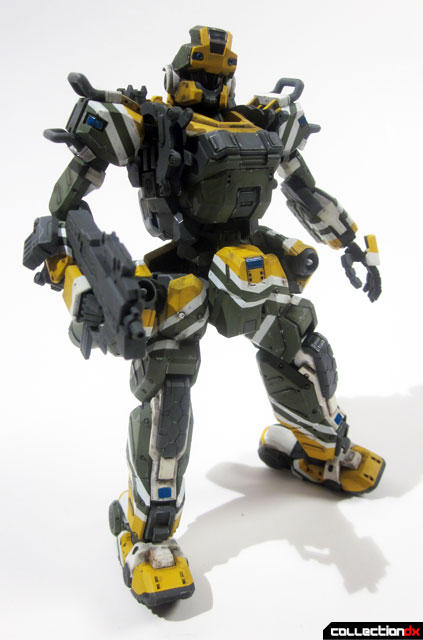 The kit builds into a reasonable sized figure and the limbs easily snap together, the exception being the small fragile plastic pin that holds the elbow together. Finally coloring includes the blue lights on the shoulders, legs and hip area. Perhaps one of my few let down of the kit was not including colored clear parts for these lights, as it would have greatly enhanced the look of the kit. Articulation is very good for this kit but I tend to keep my kits in neutral poses. Also I did not like how the optional hands and fingers that hold the weapons did not stay together well and I have had many issues with the hands holding the weapons. Overall the kits final fitting and articulation is great. 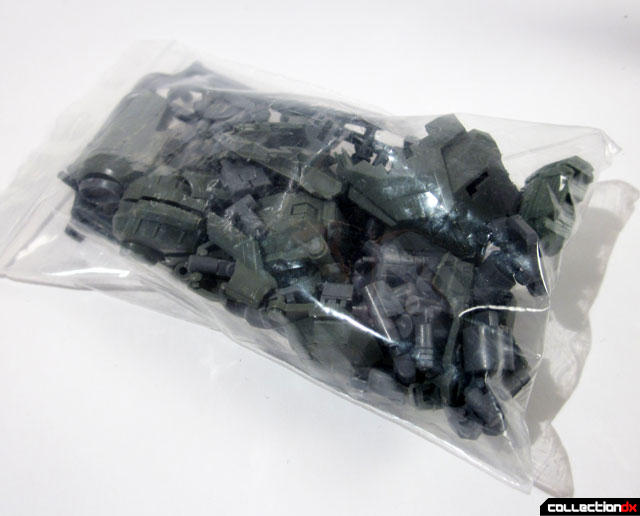 Finally more that fifty left over parts are included that can be used to customize other Border Breaks model kits. 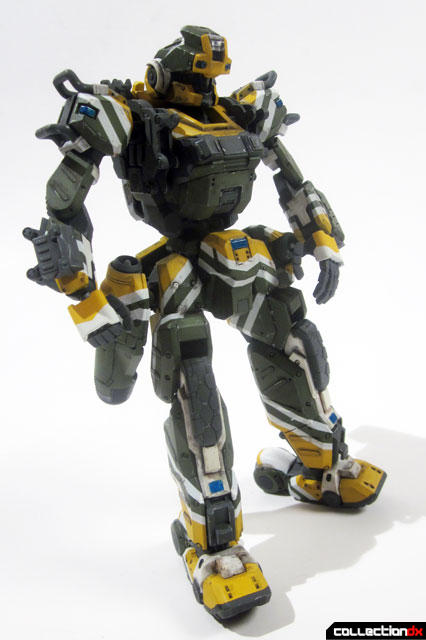 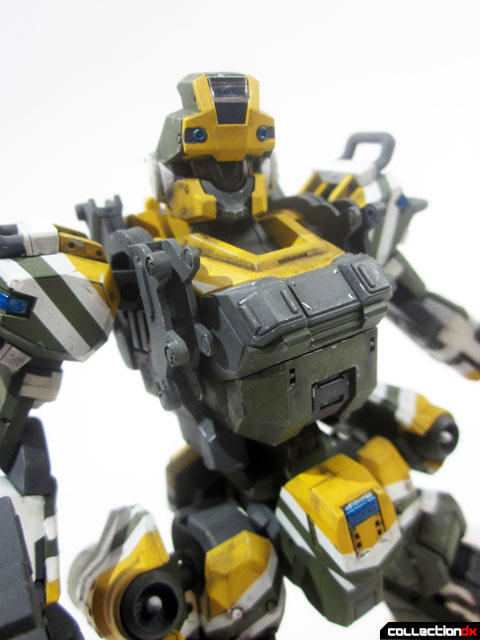 With as much difficultly I had painting the kit I actually applaud Kotobukiya for actually be daring enough to release this very difficult to paint color scheme for Border Breaks fans. The average modeler can very easily build this kit but painting it will require a lot of patience and time to achieve the require effect. This truly was the most difficult custom paint job I have ever painted but the results in one of the most rewarding models kits I have ever finished.... and yes it's in Packers colors.

I have a kit coming for a future review and Ive already started brainstorming how I will be completing the paint. I have been working on another kit that I will be reviewing here that I have been working on for 5 months so I can appreciate the amount of work that goes into a kit. I'm trying to cram months of work into 2 weeks for this upcoming kit. It will be tough but rewarding. Excellent work on this kit, I love the weathering and the finish

Looking forward to seeing the finished product! Normally I can knock these out very quick but painting on so many layers with the decal sheet having to match I had to be careful that I painted it right the first time or it would have been a disaster.

The Votoms Scopedog kit I did for CDX only took 3 weeks to finish and is one of the best kits I have ever finished. It can be done!

Can't wait to see what you have lined up!

Beautiful - well worth the wait!

You're better at painting than me. I'm jealous. :<

Ha! Thanks! The secret is Tamiya paints, a good airbrush and a good air-compressor with a regulator.

I'm so glad you included a shot of it fully assembled before the stripes and weathering were added, btw - when I saw the shot of all the painted parts in the box, the first thing I thought was that I hoped those assembled but unfinished pics were next.

Thanks for the great comment. Yes I had to show the parts as nobody would believe me on how difficult it was to paint this kit! Glad you noticed it!