The review sample arrives courtesy of our friends at HobbyLink Japan.

Baratak is an obscure property. My awareness of the character is limited to a healthy appreciation for Takara’s excellent Magnemo representation. Check out this awesomeness:

Baratak is loosely related to the Gakeen and Jeeg characters, also pinnacles of the original Magnemo style.

Since CM’s has made its name working through the classic super robot pantheon, and having recently released a modern Gakeen, it was inevitable that we would see the modern Baratak. The review sample features limited edition metallic finishes.

Barattack (I’ll be using CM’s version of the name for the rest of the review) arrives in a giant, impressive, garish box, consistent with its other Brave Gokin releases. 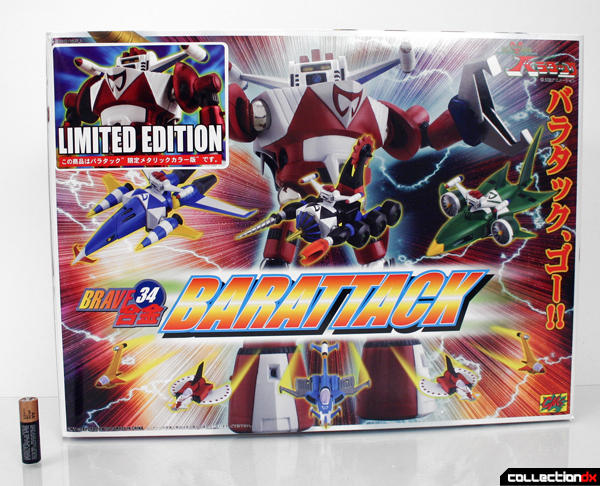 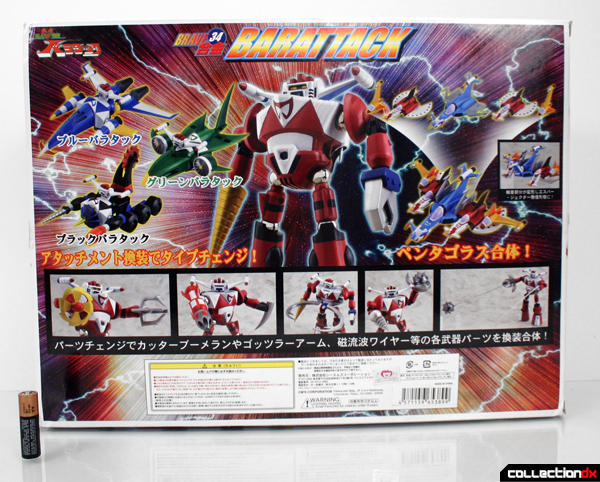 Inside, a luscious double-deck of solid styrofoam. The coffins contain a breathtaking, decadent array of accessories and parts. I was immediately impressed with the scale of this undertaking. I am typically bothered by playsets weighed down with an excess of accessories, but I am willing to accept this set on its merits, and approached it with an open mind. And everything looks damned pretty. (Note that I took these photos after I had already removed and replaced the contents. For a better representation of how everything really looks right out of the box, see the video.) 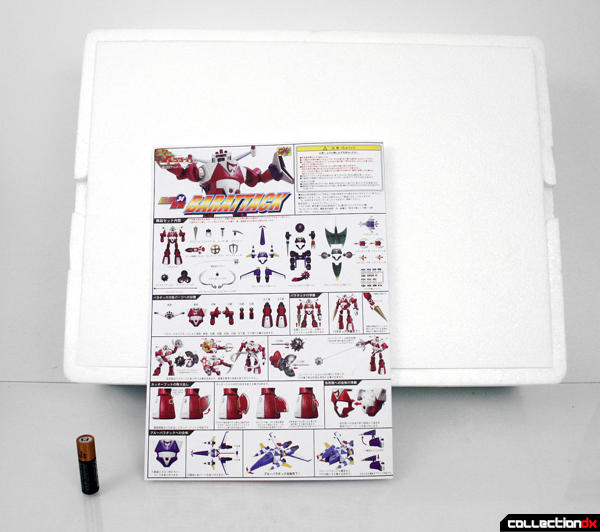 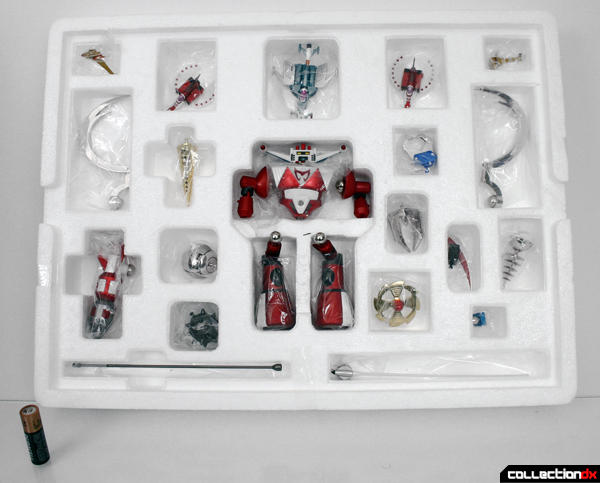 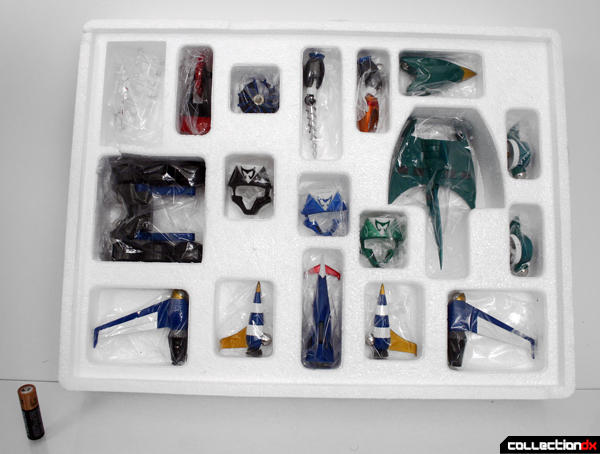 Let’s look at the base figure before delving into the rest. It’s immediately satisfying in heft, solidity, and overall quality. It’s fit and finish befits a toy of this stature. 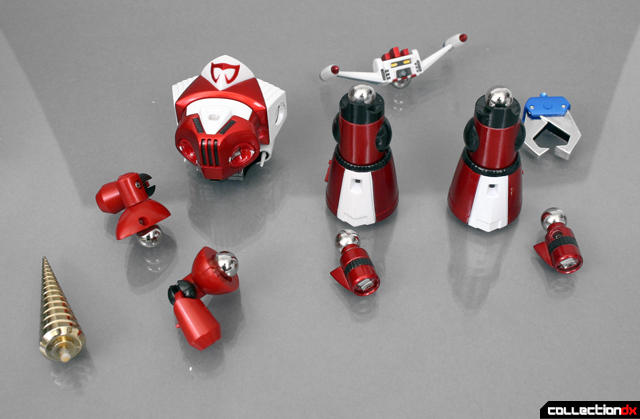 Putting the figure together is exciting, feeling the magnetic joints click into place. Let’s just...Uh Oh. It doesn’t stand up. At all. 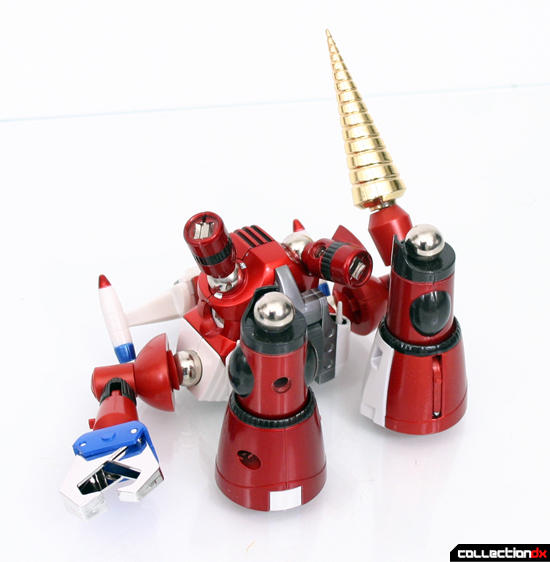 Those thighs are a huge, huge problem. The double-ball connection will not hold. You have to have everything balanced just so, and even then it is precarious and awkward. This is a fatal flaw. But he certainly photographs well! 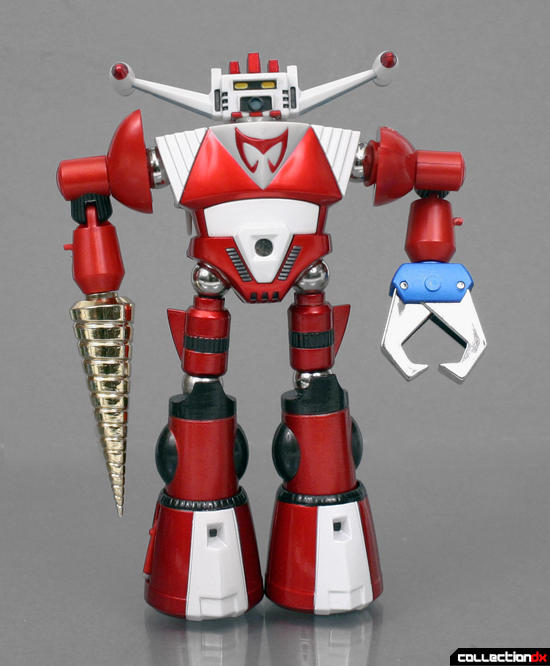 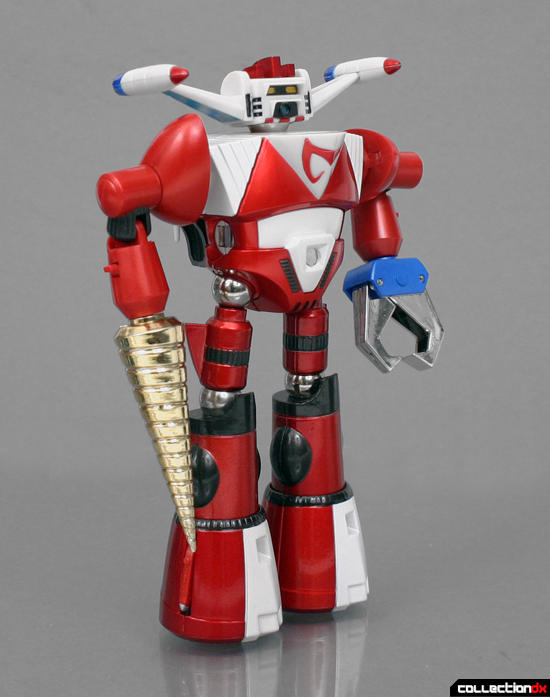 There's a nice set of articulated rubber treads on his back. 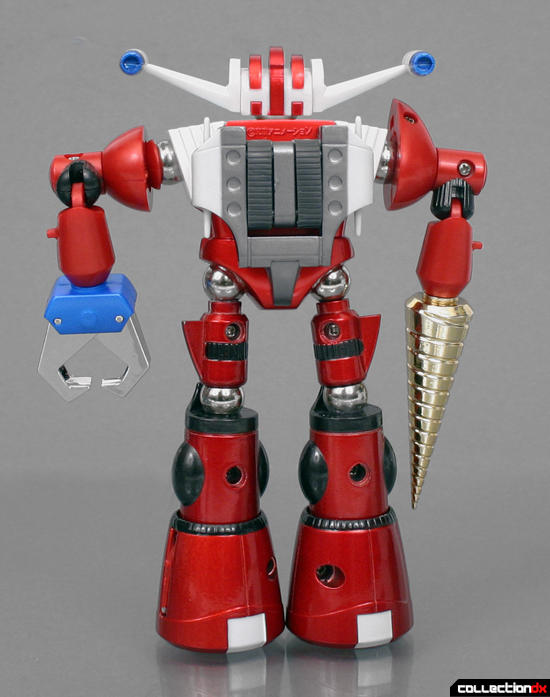 As I delve into the array of weapons included, understand that the figure will simply not pose; more precisely, it will pose for a fraction of a second before clattering to the ground. I promise I’m not just being lazy in photographing the same boring neutral stance. Also, the elbows cannot typically hold the weight of the weapon or arm attachment, so the arms will swing into a straightened position. 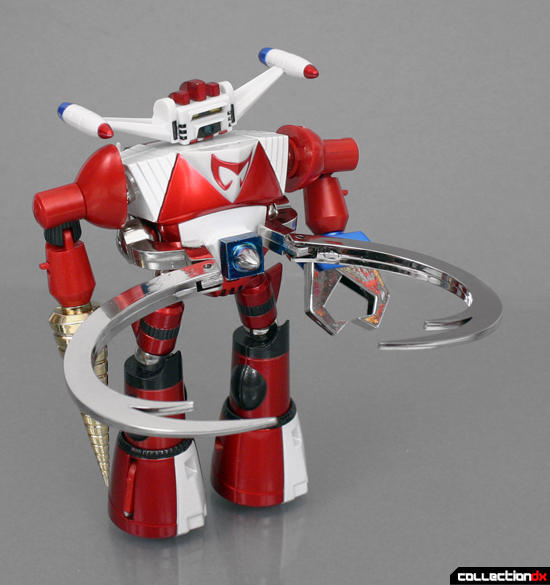 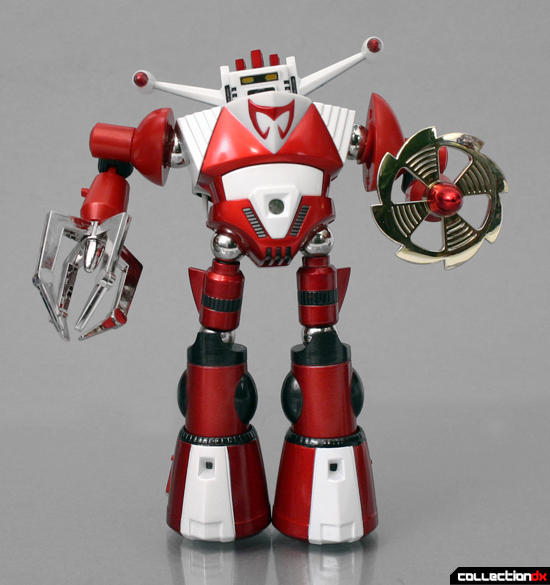 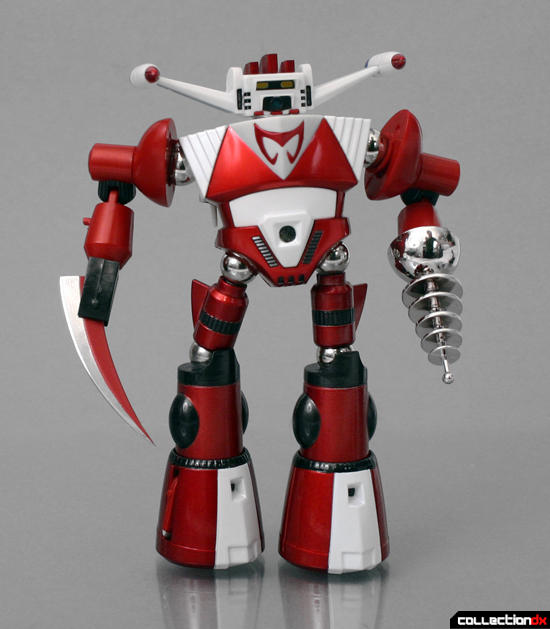 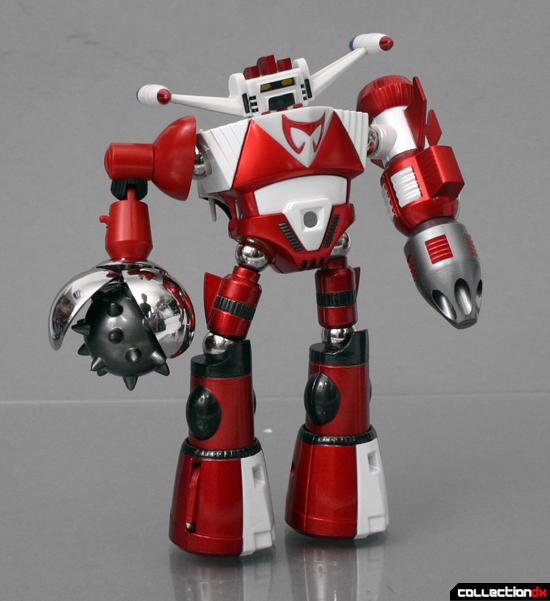 But those accessories certainly look nice! Every tiny component of this set is superb in its execution. Everything is crisp and lovely.

Barattack’s main gimmick is his many vehicle configurations. CM’s has included a multitude of parts to recreate these vehicles. A nice touch is the swappable chest plates which compliment each mode. 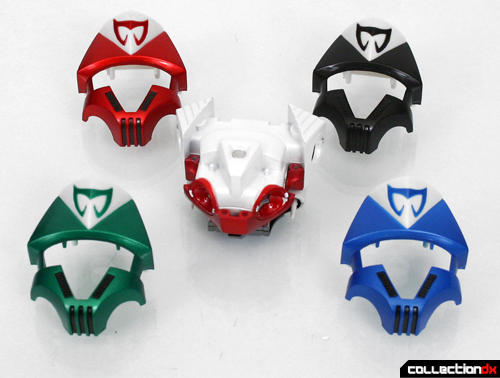 First up is a green submarine. This is by far the best vehicle mode. Everything holds together perfectly. 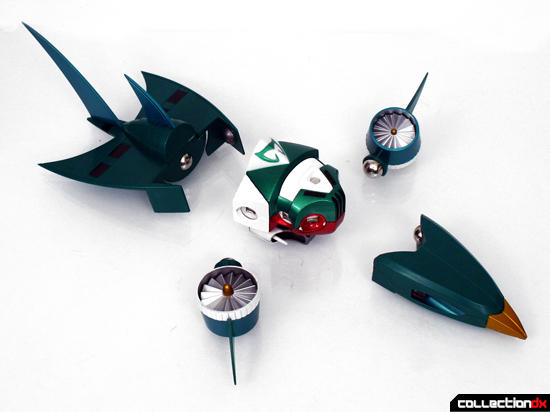 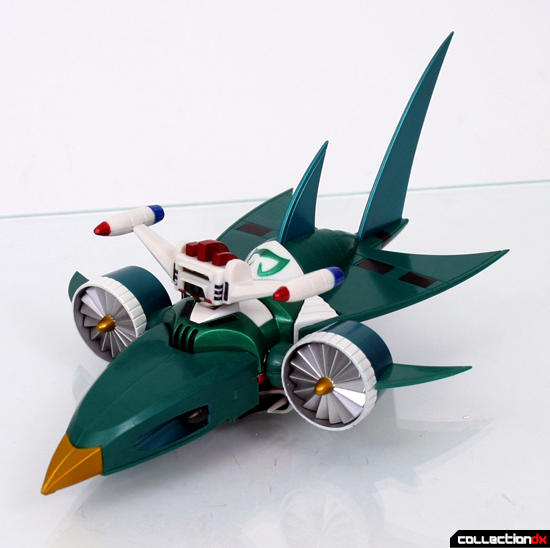 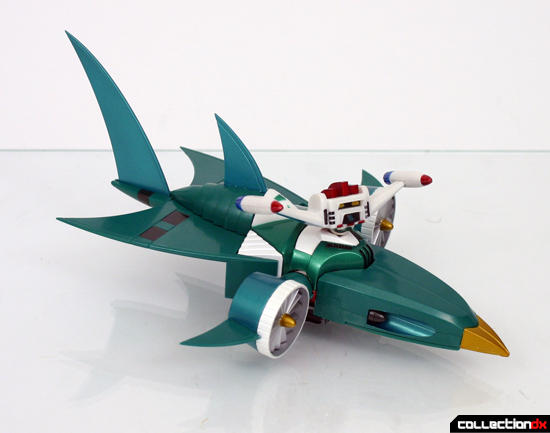 The blue air vehicle (does someone know the names of these things?). The bird-like head is a floppy distraction, but again everything looks great. 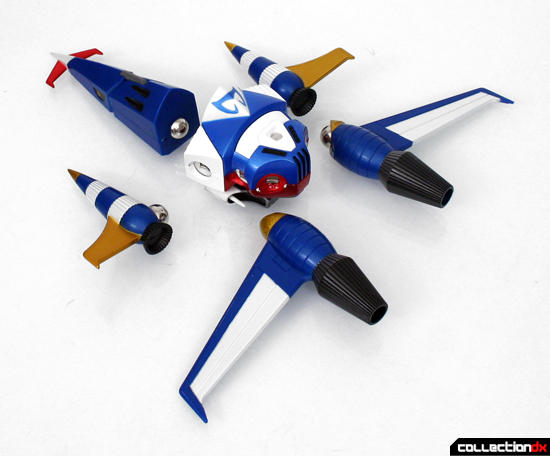 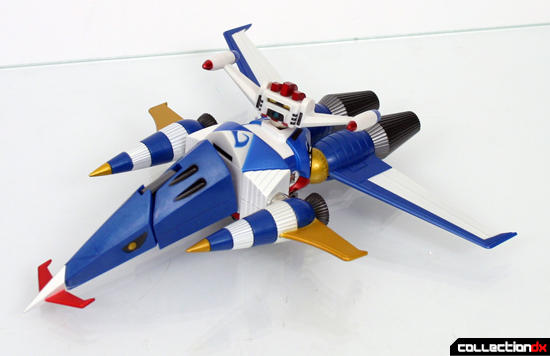 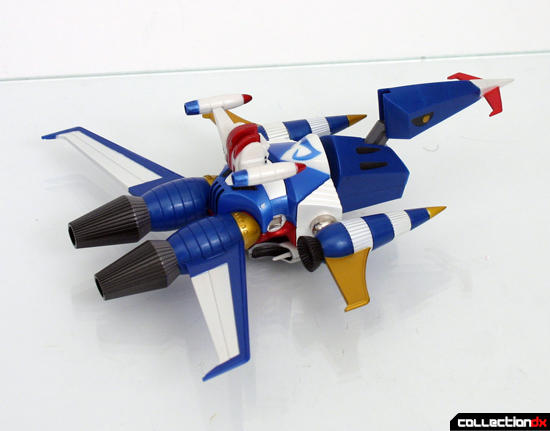 The black land ship is the most compelling of the vehicles. The chassis is substantial. The cores of those wheels are diecast, and the tank is built like, well, a tank. 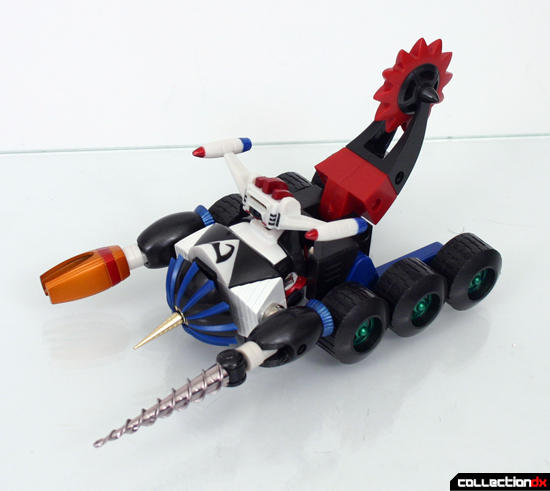 A variation bot mode is pure classic Takara styling. I like the drill arms used for the black modes. 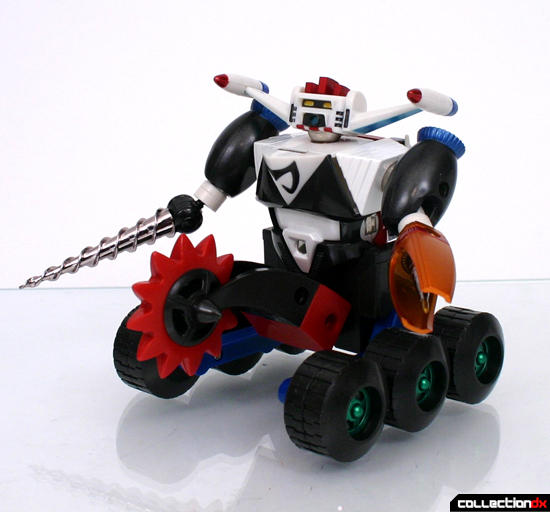 They also look great on the base bot. Although it barely stands. The vast quantity of parts makes this set a proper playset. It’s as much meant to be played with as any modern Gokin, and I appreciate that.

The set comes with a handful of diminutive, well detailed ships. So what we’re left with is a huge box of beautiful, faithfully-rendered parts, which together create endless play value. But those thighs! I cannot get over those thighs. For the original price of this set, the damned thing should stand up, period. What a frustrating sour-note for an otherwise terrific toy. Do the thighs ruin the whole thing? No, but they nearly do. There is no good reason why CM’s couldn’t have just made the lower legs and thighs one articulated piece. The extra thighs add nothing to the toy, but they nearly destroy the whole endeavor.

I will say that at HLJ’s now hugely-reduced price, the Barattack makes a lot more sense.

5 comments posted
Per the box, the names of the

Per the box, the names of the modes are simply Green Baratack, Blue Baratack, and Black Baratack. Pentagoras is the combined ship. The HLJ link you provide also says as much : )

So- wait- why make it so the parts came come apart when none of them are interchangeable between the different forms other than magnetic balls!? Why not just include five different bodies that DON'T separate (except for swappable weps), and ditch the magnetic-thingie altogether??? What a f***in' parts-former disaster!

This is one of the reasons why old school super robots drive me nutz.

I am very angry right now!

Three days after I purchased Barattack from HobbyLink Japan, the guys at HLJ decided to reduce the price by 55%!!!!

And the price will continue to go down when everyone comes to know about the thigh problem!!!!

Oh come on CM's, you can do much better than that!

I was considering this after he went on sale, but I expect my toys to stand. Still, looks like a super fun set.

And the weird thing is Gakeen works, not perfectly, but about as well as a magnemo figure can. And I wanted the normal version so bad, always loved his old style looks. Thanks for saving me about $120.00!