Ever since Macross 7, fans of the franchise were introduced to the idea of the antagonists using Variable Fighters. The VF-27 from Macross Frontier is very much the culmination of those purple planes and their plight to pester our plucky protagonists. Well, the VF-27 is more magenta, but the point still stands: this Valkyrie is bad to the boosters. Its given name of Lucifer certainly says it all.

The DX Chogokin VF-27 Lucifer Brera Sterne custom is the first new design to enter Bandai's DX Macross Frontier series. It is an all-new toy and shares no parts with the previous VF-25 toys. 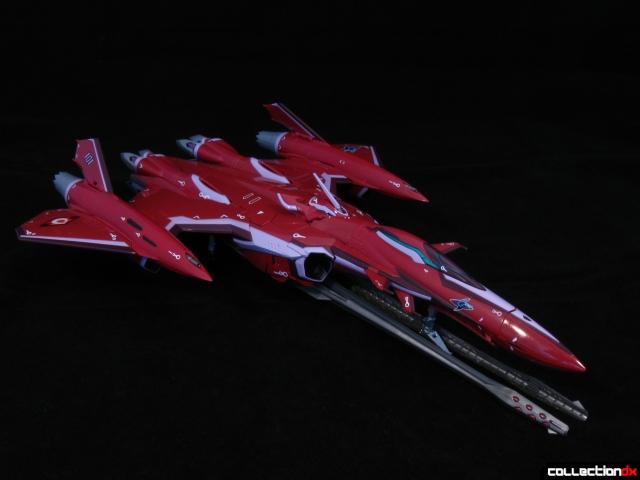 Starting off with fighter mode, the VF-27 has a style very reminiscent of the real life SR-71 which was also the basis for the Fz-109 Elgerzorene (EL-GAH-ZOLN). The Fz-109 can be considered the first "evil" Valkyrie in Macross, and I think the VF-27 design pays a nice homage to it. The toy has a sharp, solid quality to its molding, which really captures the ominous presence of the VF-27.The fighter mode of very solid. The toy features numerous tabs and pegs for securing all the parts, so nothing flops around. In fighter mode the toy rests on a set of appropriately-sized diecast landing gear. My only problem with this toy is that, out of the box, it feels very oily due to the mold release that was left on the figure. A little cleaning will fix that. 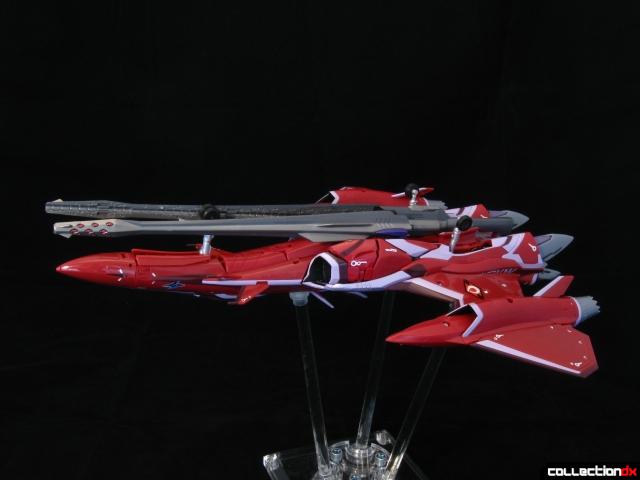 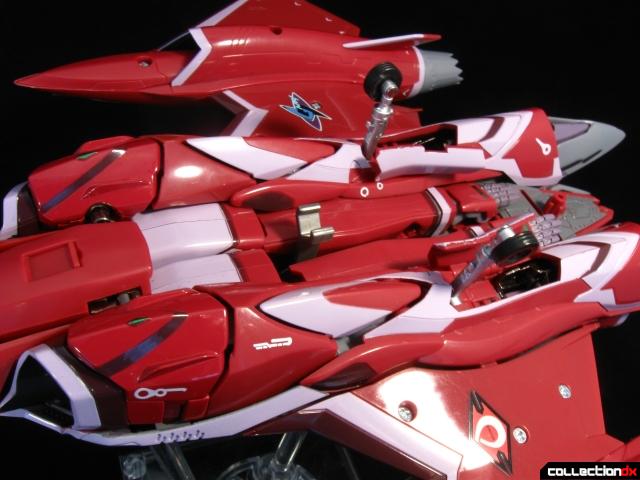 Using a combination of a fold-out tab from the gun itself, and a folding clamp from the underside of the fighter, the gunpod remains firmly in place for fighter mode. 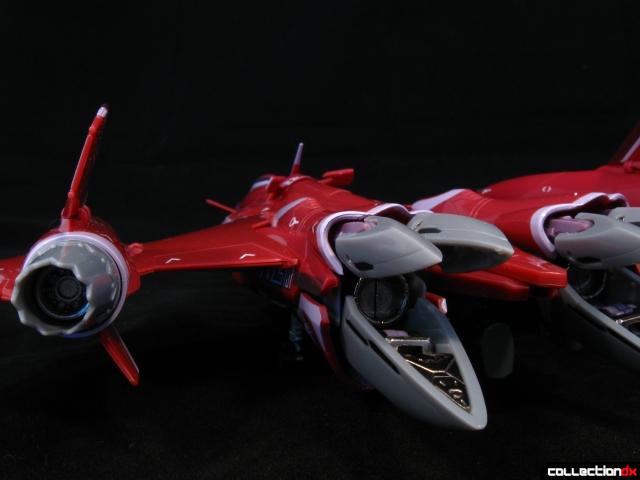 The toy has a good bit of detail when it comes to the engines. Both feet have visible diecast innards, while the outer engines have movable nozzles. 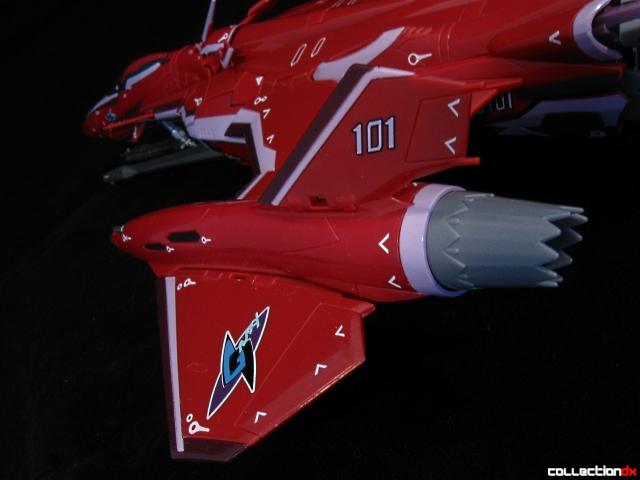 The VF-27 has numerous markings such as the Macross Galaxy logo and several small white highlights. 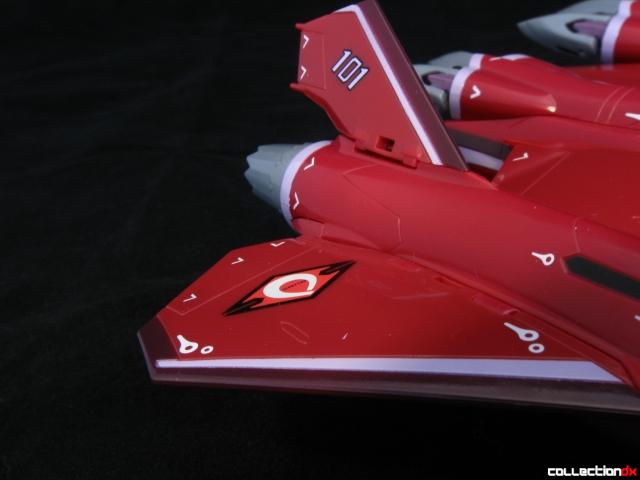 The right wing has a New UN Spacy logo. 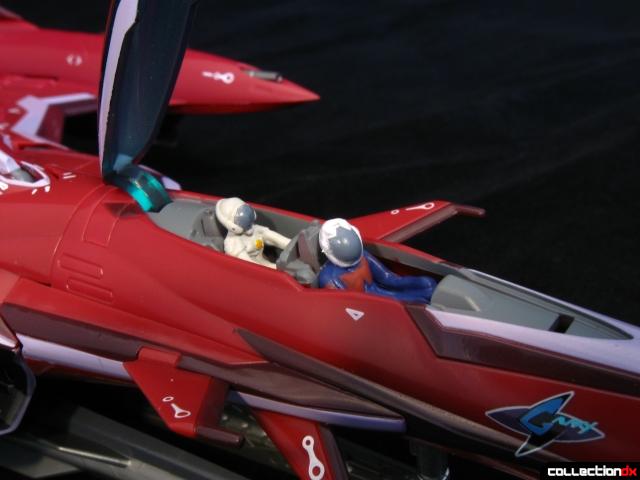 Underneath the hinged canopy is a matching set of Brera and Ranka figures. 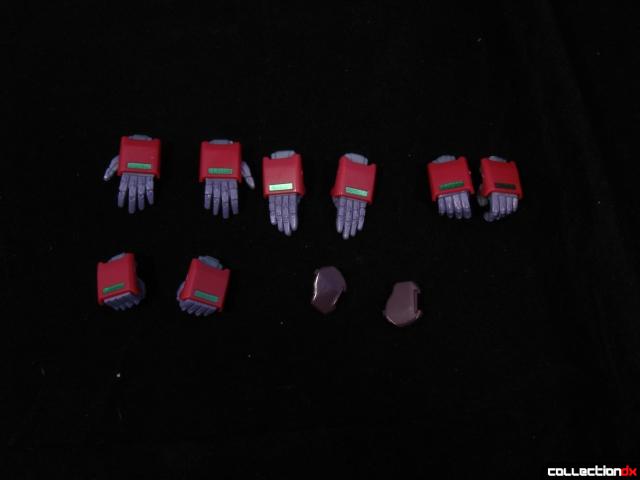 The VF-27 also comes with a number of optional hands, which consists of: two fists, two relaxed hands, two karate chop hands, and two gun holding hands. The toy also comes with a pair of covers for the chest intakes. 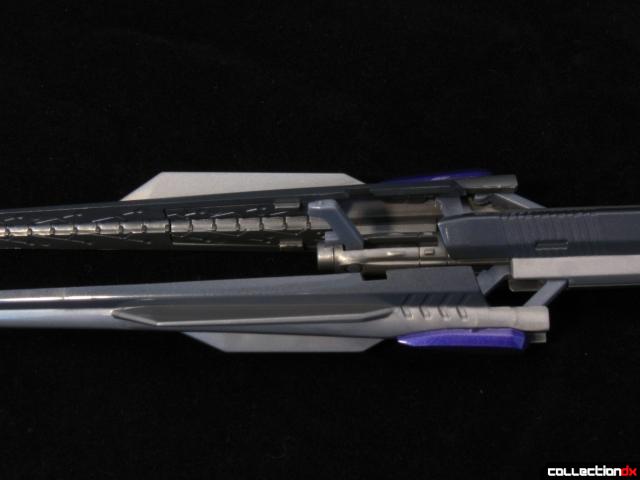 The large beam gunpod swings open with no geared mechanism or lock, so it may need adjusting to look just right. You can also see the extra fold-out tab for securing it in fighter mode. 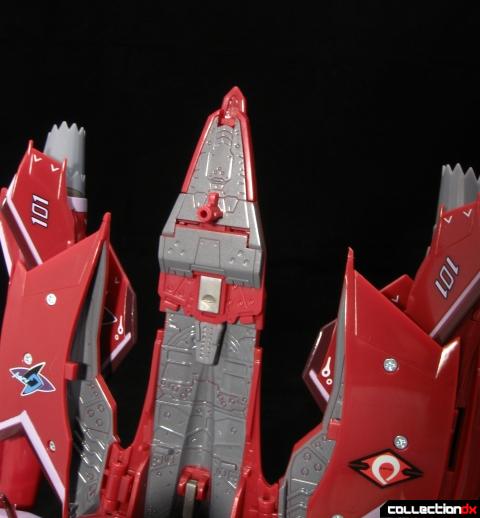 The shield stores underneath the tail section. It simply snaps in between a few brackets. The VF-27 has quite a lot of detail underneath. It's a nice touch. 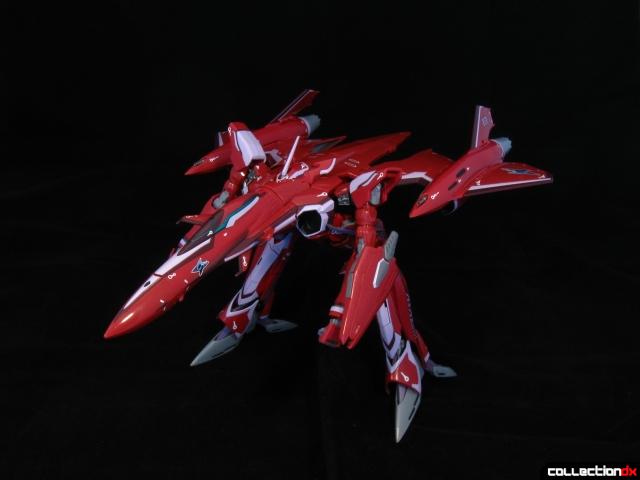 Gerwalk for the VF-27 is a fairly robust configuration, given the design. Through the use of extending knee joints the legs can bend forward nearly 90 degrees. The knees also feature swivel joints so you can achieve a proper A-stance. 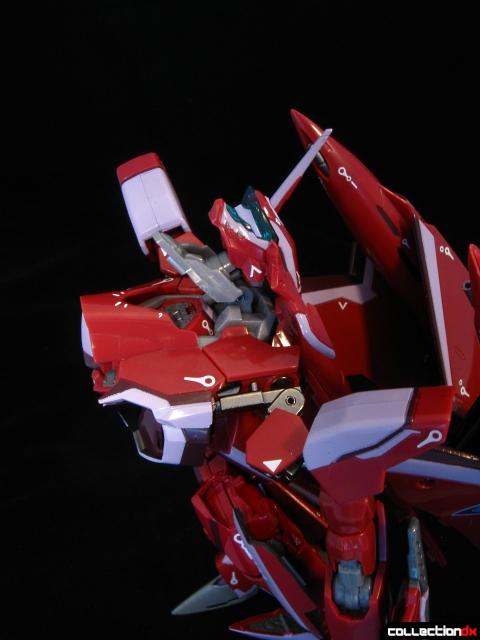 Transformation to Battroid mode is similar to that of the VF-25, with a few unique changes. First off, the neck has been totally redesigned to include a much more solid base that slides in and out smoothly. Second, the base of the neck hinges upward to allow the plane fuselage to snap under the chest-plate with much less fiddling. 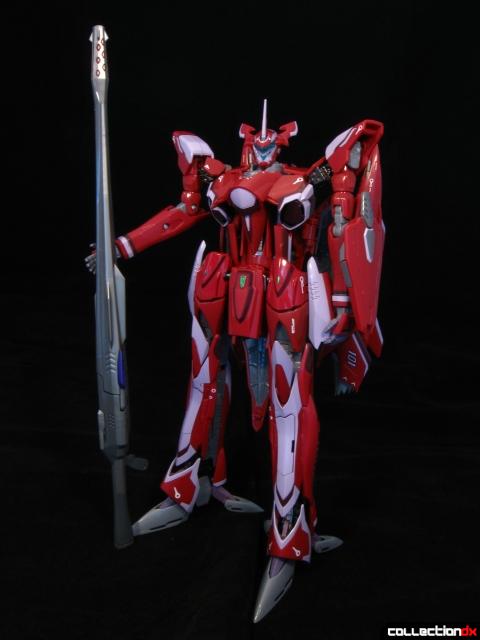 Battroid mode is very solid for this toy. The metal and plastic parts are evenly distributed throughout the toy so no one part feels too heavy or too light. 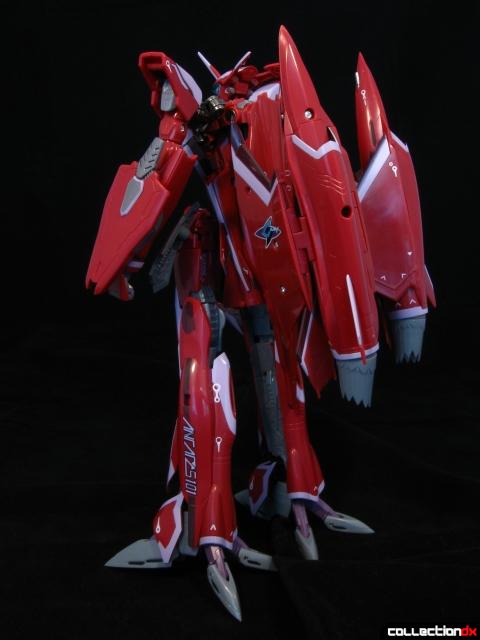 One good thing about the engine pods is that they actually lock in place for Battroid mode. They are mounted on a double hinge that clicks in place. Despite the bulk of its backpack, the VF-27 never feels like it's going to fall over. 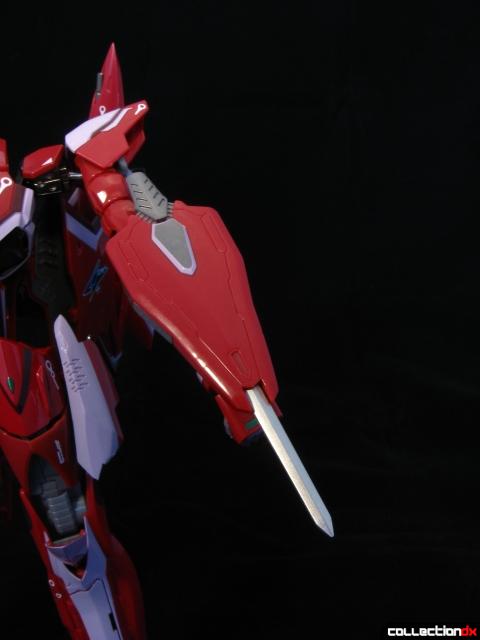 The shield pegs into the left arm, and just like in the show, it features a retractable blade. Simply push the blade out to expose it. 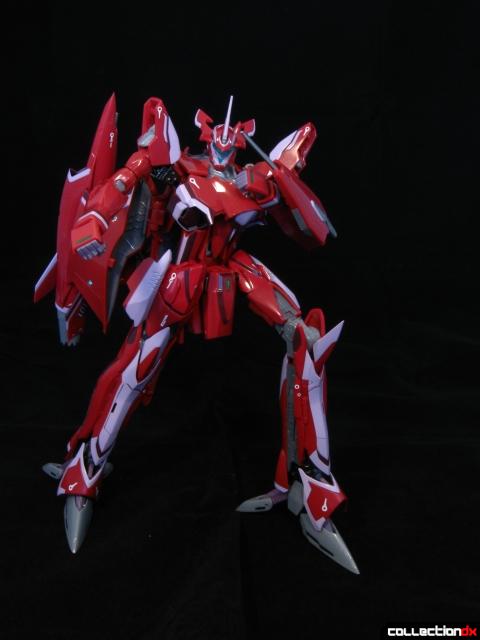 Articulation is very well executed. Most of the joints feel tight and are relatively free of obstructions. You will want to pay attention to those pesky canards as they can interfere with the legs if you're not careful. 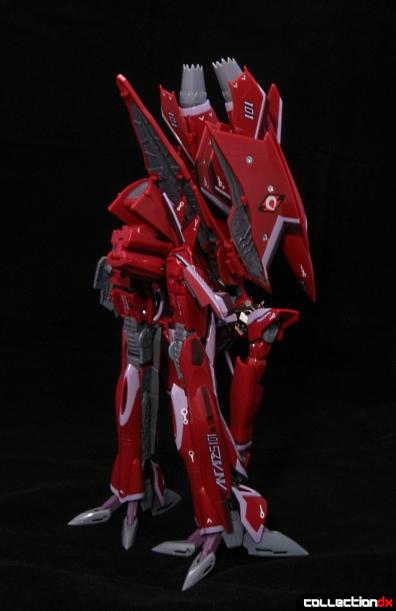 The VF-27 also features a weird optional waist joint which has to be unlocked in order to be used. It's not really good for anything except helping the VF-27 touch its toes. However it's entirely superfluous and does not affect the toy if you choose not to use it. 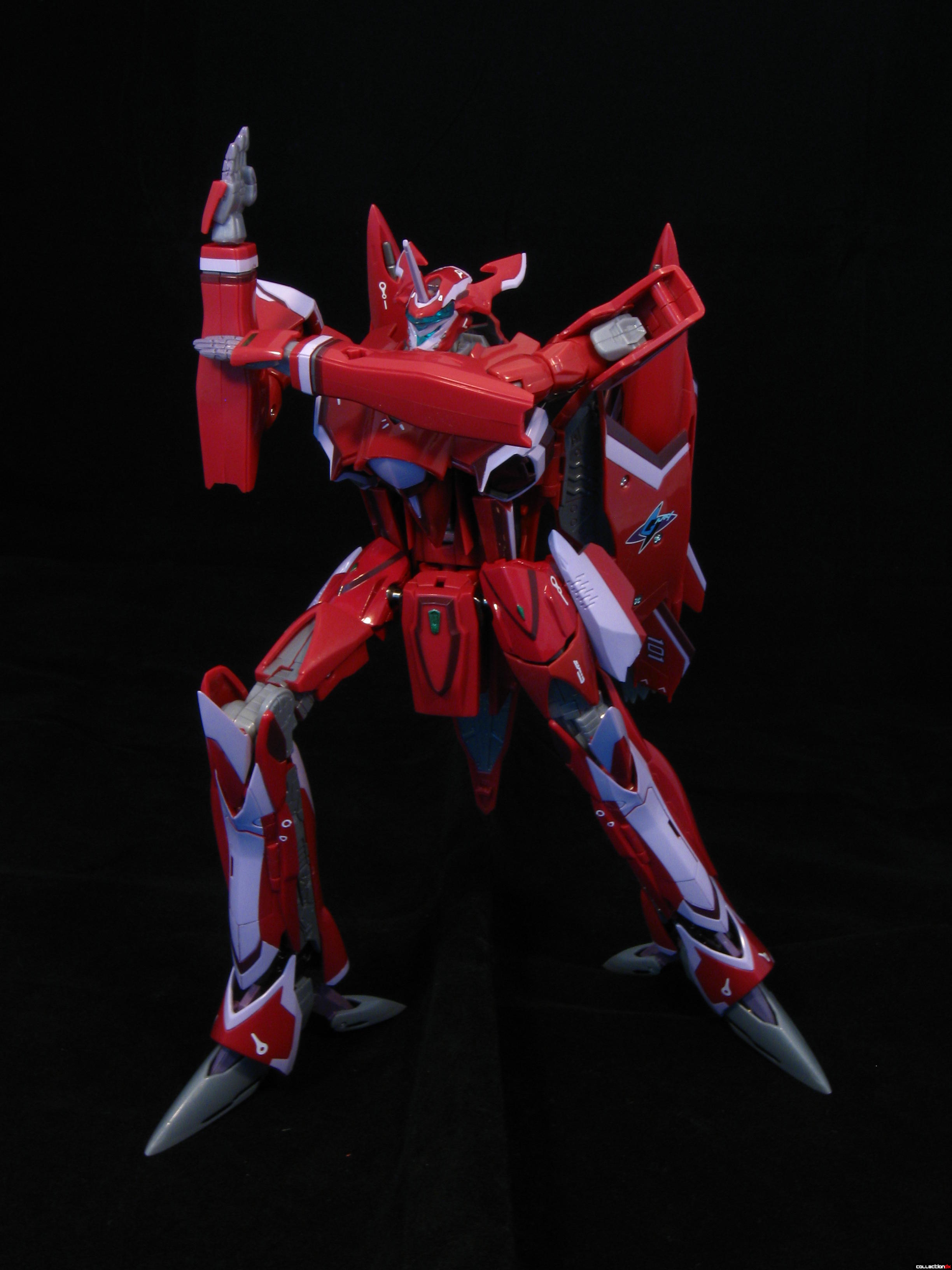 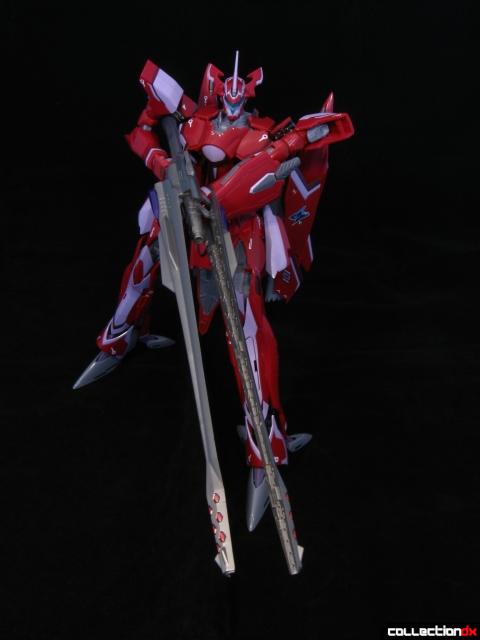 The VF-27 is capable of hefting its massive beam gunpod. 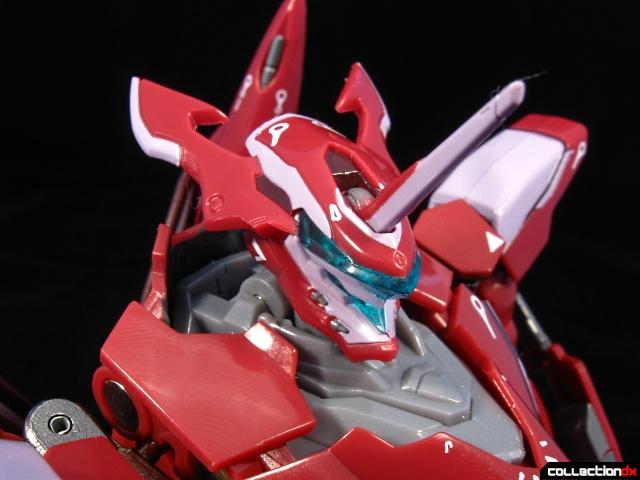 The head on this toy is especially nice. It's made of sharply molded plastic, with clear green for the sensor piece. The head laser can move back and forth. 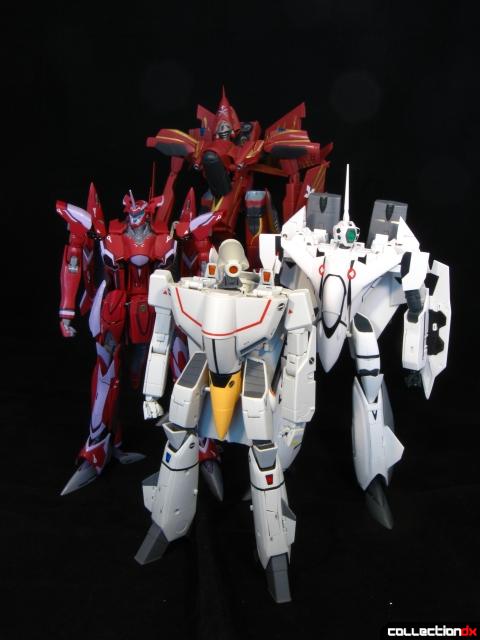 Overall I think the VF-27 is an excellent realization of the design in toy form. It's a great toy on its own or as a part of your Macross collection.

9 comments posted
which ultraman was that?

i recognize that stance but which one?

I gotta say, pictures dont do it justice because Ive seen it many times and I never gave it a second look, but I saw this one in person over the weekend and I was impressed. I dont have any newer style macross valkyries, but Im seriously going to look into picking this one up.

There's no light piping effect on the valk's head visors. I wonder if there was one for the prototype the Bandai team has made in the first draft.

I love that fighter mode so much, but I'm still not digging the other modes, save for a few bits. Like those delicious ankles. Mmmmm

Futuristic SR-71 that has a gerwalk mode? GAH! I don't think I can pass on this thing :P

While I don't love the VF-27 as much as, say, the YF-19 or VF-17, it's still REALLY awesome. This figure also seems to have fixed all the ugly ass problems inherent in BanDai's VF-25's.

Thanks for bringing this to "show-n-tell' this past weekend, Andrew. Really cool set. So nice to see some progress, in a few joint areas, the landing gear, and head/neck, as compared to the one, 1st ver. VF25 I've got.
Also, that nosecone folding looks a little less frustrating into Battroid mode than the 25.

I'm diggin' the balanced overall design, and the slim look.

The design looks fantastic, and is a definite improvement over the dx chogokins of the vf-25s in terms of gerwalk mode. However, considering the standard bandai has set with some of their recent kits in terms of articulation, I can't help but feel that such an expensive toy should have double-joints in at least the arms. It seems to me, once again, bandai is deciding that it is "good enough" for your $200.