In Macross, the VF-19 is second only to the venerable VF-1 when it comes to iconic Variable Fighters. As the next generation in hero Valkyries, it is instantly recognizable as a sleek and aggressive design.

For the first time in over 15 years, the VF-19S Blazer Valkyrie was once again realized in toy form. Originally slated to be part of the ambitious VF100 line, this toy comes as the second entry in the VF Hi-Metal line. This particular line attempts to capture various Valkyries in 1:100 scale with a small degree of parts-swapping.

As the second entry in the VF Hi-Metal lineup, the Blazer Valkyrie is a retool of the Fire Valkyrie and shares most of its features and faults. 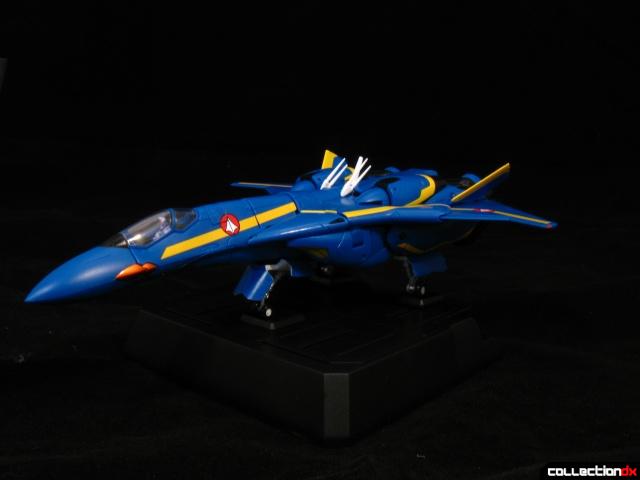 The Blazer Valkyrie is very solid in fighter mode with numerous tabs and holes keeping it together. Despite being labeled as Hi-Metal, the toy is mostly plastic with the only notable metal areas being the ankles and hinge for the back of the Battroid mode. 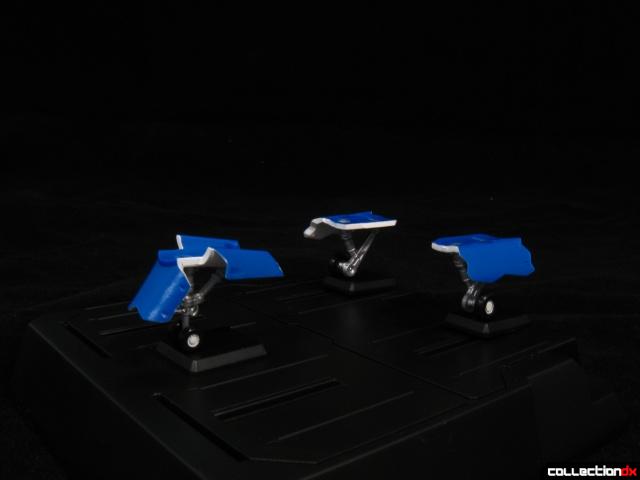 One of this faults inherited from the Fire Valkyrie is a lack of landing gear. The Blazer makes up for this by including a display base which can be outfitted with landing gear that form a cradle for the toy. Unfortunately the toy does not actually attach to the landing gear and is easily bumped off the display base. 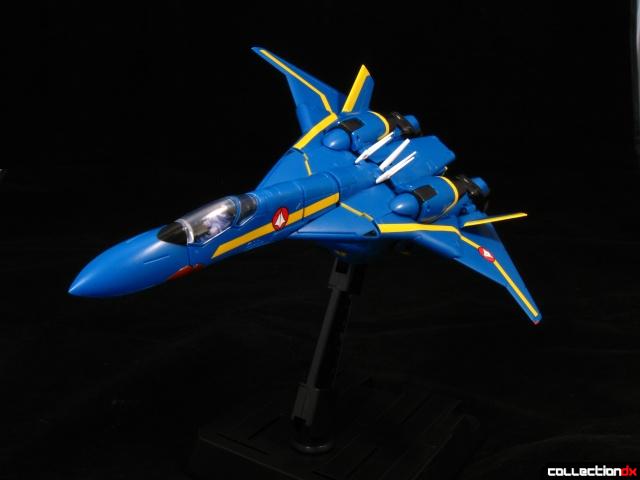 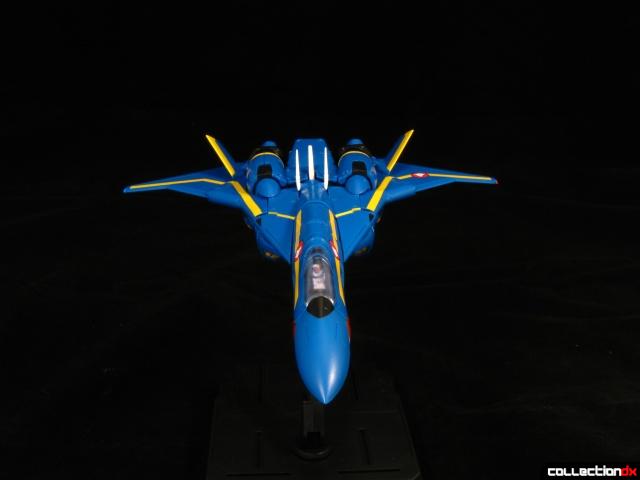 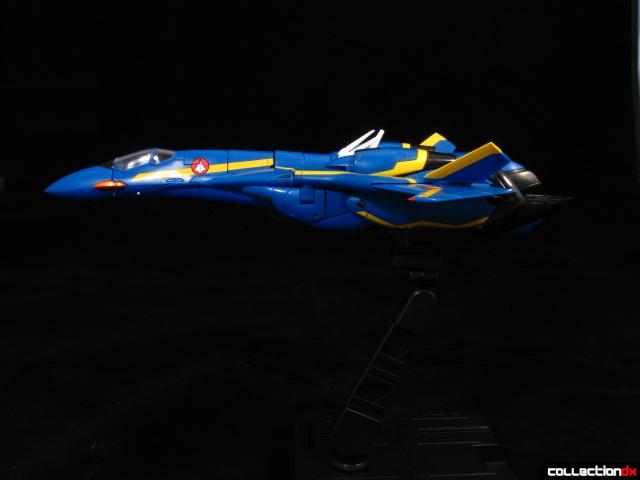 The display base also comes with an articulated arm and three mounting brackets for each mode of the Blazer Valkyrie. Sadly there is no way to attach the gunpod to the toy when it is in fighter mode. 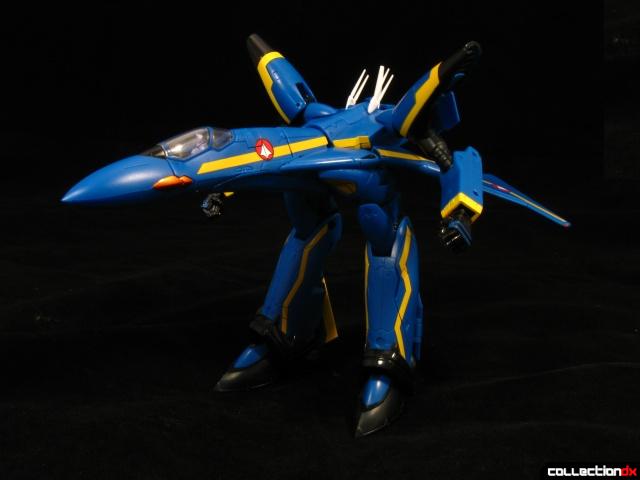 The transformation to Gerwalk mode is fairly straightforward with a few bits of parts swapping for the hands. Much like previous VF-19 toys, the Blazer's Gerwalk mode also lacks any kind of locking mechanism for the upper torso as it straddles the wing sections. However, the tightness of the metal hinge used to move the upper body is stiff enough to prevent the toy from coming apart easily. 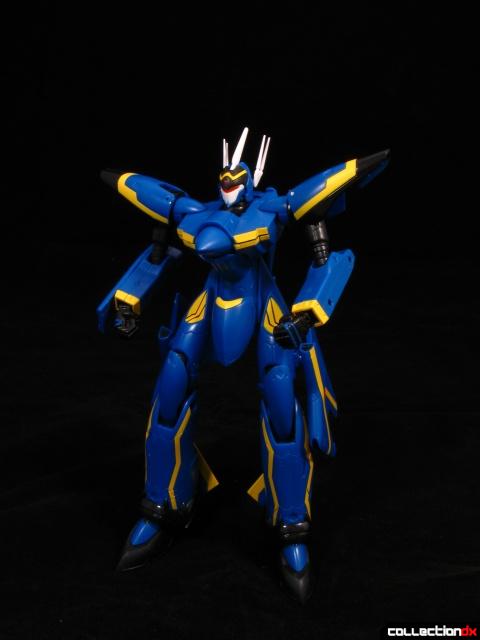 Battroid mode contains one bit of parts removal that I just cannot stand. There is a small panel in the neck section that must be removed for this mode and it does not go anywhere except back into the box. Other than that, the transformation to Battroid mode is more or less pretty self-contained. Honestly it is not a very smooth transformation and requires some fiddling with various bits to make it all work. 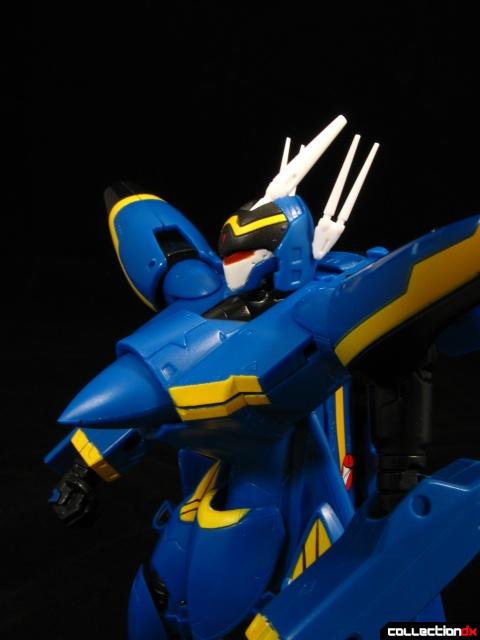 Another bit of parts swapping involves the back of the Blazer's head as you can swap out the rear portion with the head lasers for a nearly identical piece with more splayed out lasers. Unfortunately this piece is also prone to coming off while fiddling with the head. 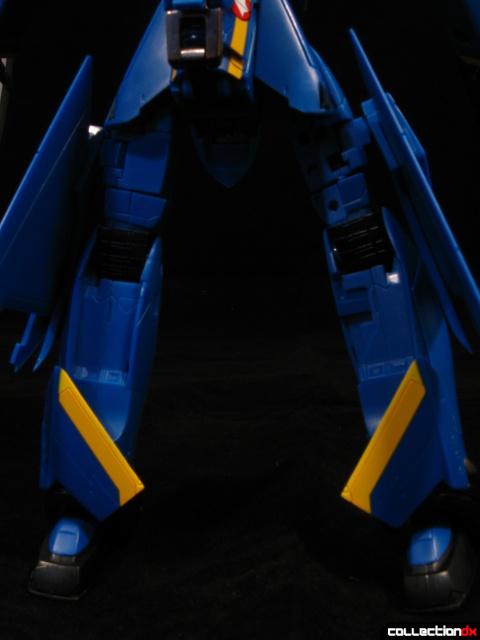 As a bit of optional parts swapping, each leg can be "filled-in" with three nondescript plastic pieces. I find this to be unnecessary as it only affects the back of the toy. 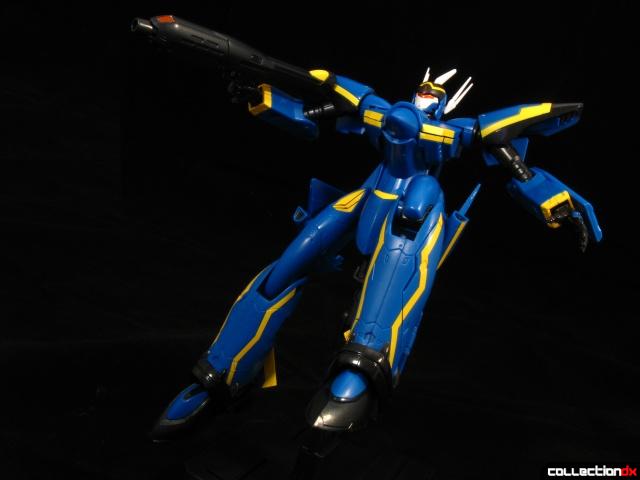 The display base works well enough with Battroid mode. 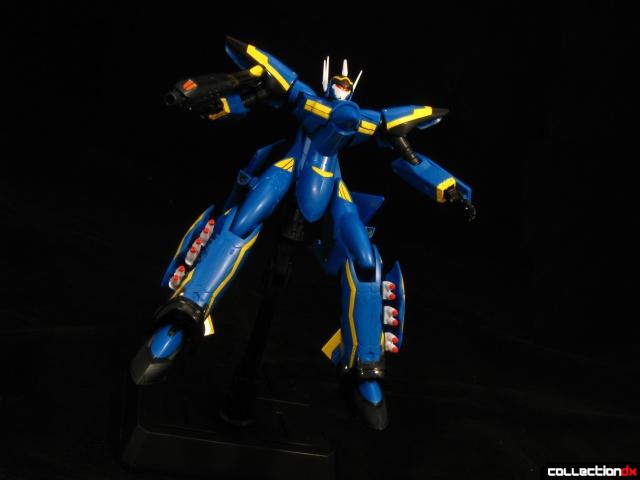 Also included is a pair of optional shin panels that show off the Blazer's internal missile launchers. The effect is simple but effective. 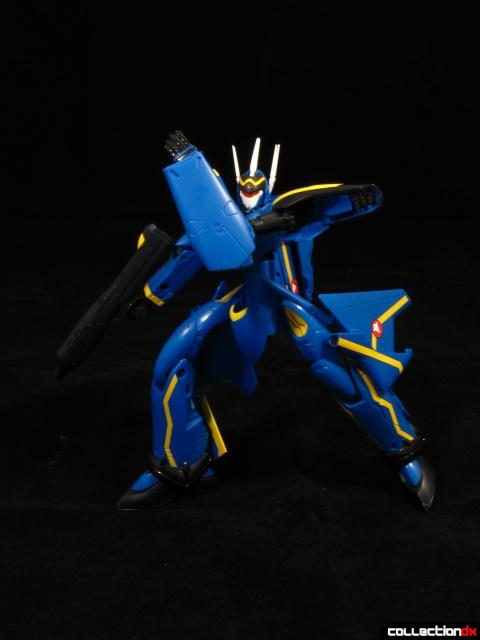 As a whole, I find this toy to be rather unremarkable. Despite it being a toy of one of my favorite designs, I find that the size and execution make for a banal experience. Adding in the things this toy cannot do cuts into my enthusiasm. I find myself wishing the Blazer was bigger and had less parts-swapping, which is exactly what another company plans to do with the design. If you are able to look past the flaws of this toy, it is still a reasonably competent representation of the VF-19.

I do like the missile launchers on the legs. It looks nice.

Lovin the site's new and improved look. i gotta say I'm not a huge fan of macross, but this review has been a real eye opener, this model might be the first of many to be added to my collection. Thanks a lot,and Keep up the good work !