The figure for this review was provided by Hobby Link Japan. Please check it out.

The VF-11 is seen as the true successor to the VF-1 in the Macross franchise. While possessing a similar profile and characteristic single camera and laser head, the VF-11 manages to capture the spirit of the VF-1 while maintaining its own style. After it burst on the scene in the first episode of Macross Plus, the VF-11 went on to becoming the ubiquitous good guy mecha in Macross 7. While the VF-11C is mostly regulated to background filler, it does get a few moments of glory.

Gamlin, you are always glorious.

Originally announced for release late 2009, the VF-11C is another entry into Yamato Toy's growing catalog of Macross 7 mecha and is also the first toy of this particular VF-11 variant. Before it only existed as a set of small 1/144th scale models from Bandai.

Now the basic toy is no different than the VF-11B as reviewed by Prometheum5 and that's a good thing. Yamato's VF-11 is quite possibly the best Macross toy they have released thus far. 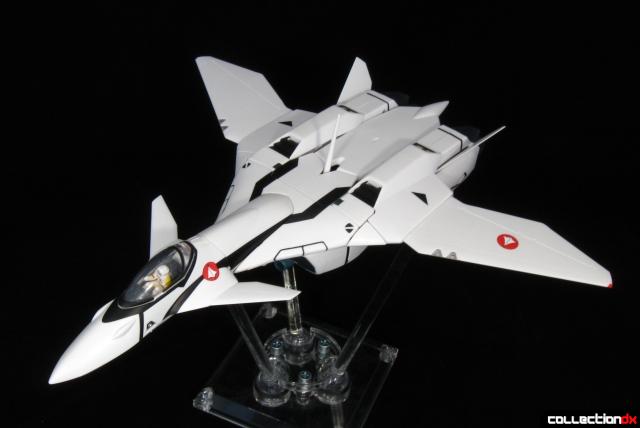 Starting off in fighter mode the first thing you may notice is bright white body accentuated by ink black lines. The effect is very similar to the VF-1 Roy Focker color scheme. The figure is very solid in fighter mode with every piece locking firmly together.

Putting the VF-11 next to its ancestor, one can see a natural lineage between the two. As with the VF-1, the VF-11 has moving wings and diecast landing gear with rubber tires. 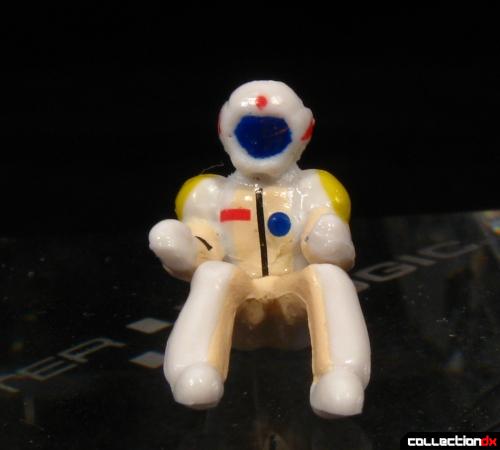 The VF-11C comes with an in scale Macross 7 era pilot. I'm just going to go ahead and say this is Gamlin during the few times he piloted a VF-11C. 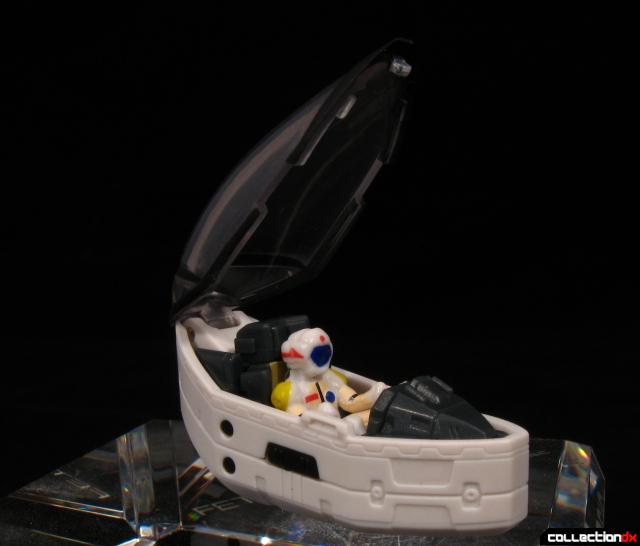 The entire cockpit functions as a removable escape pod. Simply pull the pod out to display it. The VF-11C's canopy lacks the rainbow coating used on the VF-11B and VF-1. Rumor has it that Yamato has decided to drop this from future Valkyrie toys. 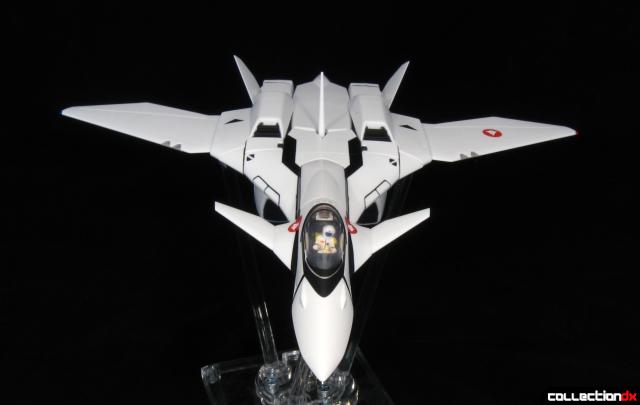 There's just something about the all white body and sharp black detailing that really complements the design. 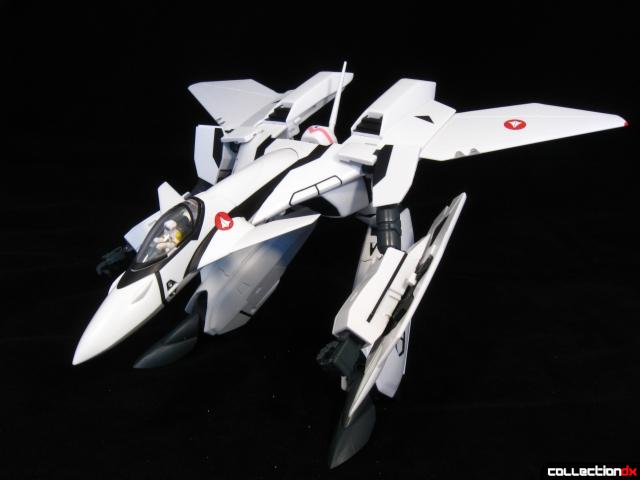 GERWALK mode looks terrific. The knees and ankles are ratcheted to provide stability. The lower legs can also be pulled out to allow them to bend ninety degrees forward. 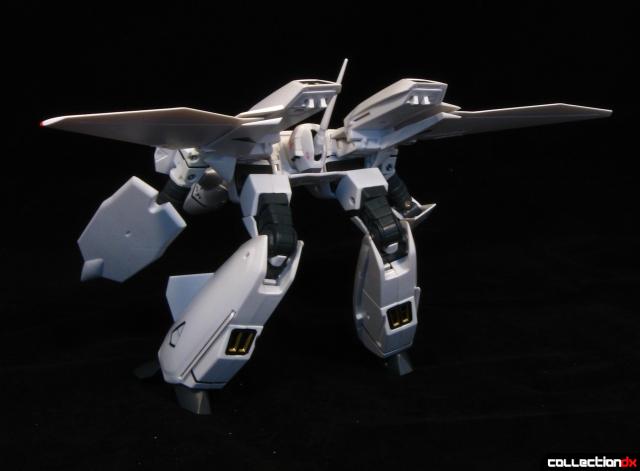 A swivel joint in the knee helps to get the figure into a proper A-stance. 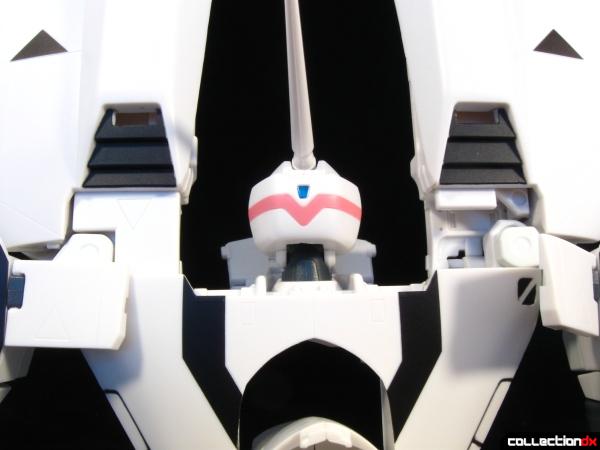 Another nice feature is the inclusion of movable shutters than fill in the gaps for GERWALK mode. These simply slide out of the upper wing area and slot into the chest plate for added rigidity. 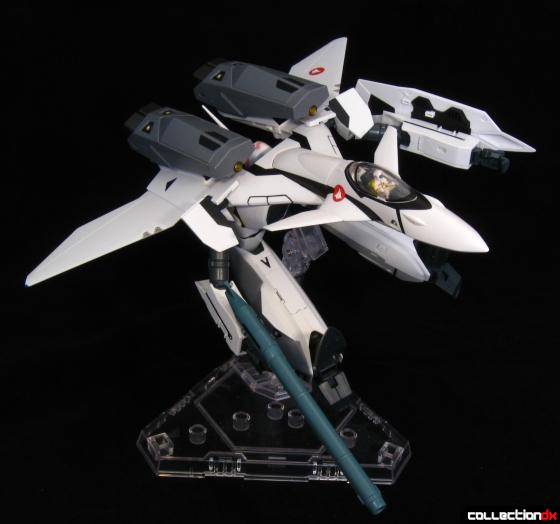 The figure comes with two stand adapters. One is used for fighter mode and GERWALK mode. The adapter fits any Yamato Macross stand or Mighty Block stand. I have found that out of all the Valkyries, the Mighty Block works really well with the VF-11. The figure also comes with a pair of boosters and leg packs. The leg packs attach via a magnet, which is one of my favorite features. Just slap them on and they are completely secure. The boosters latch on with a pair of clips that go in with a satisfying snap. 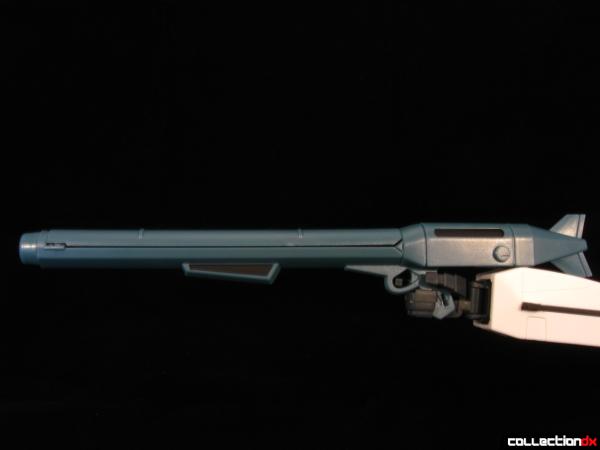 Here we can see the new gun pod. This trimmed down model matches the original design quite well. 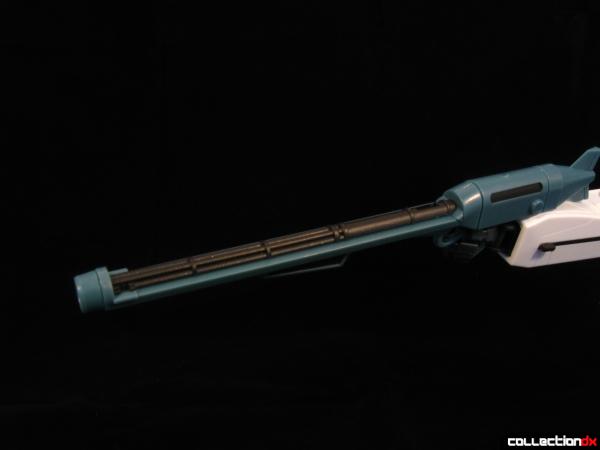 You can remove the top cover to reveal the inner Gattling gun. The cover is also said to be the gun pod's magazine so you can have the toy posed to reload. 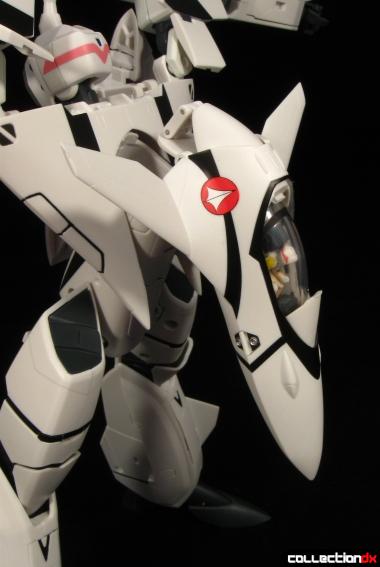 Moving on to Battroid mode, we get to see the toy's nifty canopy shield. It is completely internal and quite ingenious. Using the small sliding tab under the nose, you depress the cockpit pod and let the front portion of the shield slide out. I recommend tapping the nosecone to expose the front shield and then holding it in place by pulling the sliding tab as forward as possible. While still holding the tab, pull the canopy shield up until it snaps in place. The rear portion of the shield simply folds out with a double-hinged joint. 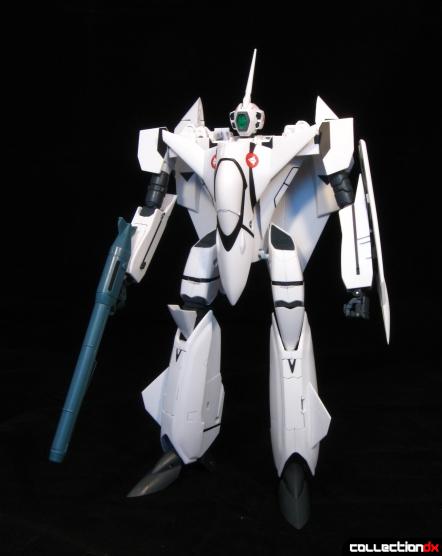 Battroid mode definitely looks the part. The design itself is very clean, utilitarian, and compact and the toy captures all of that almost perfectly. 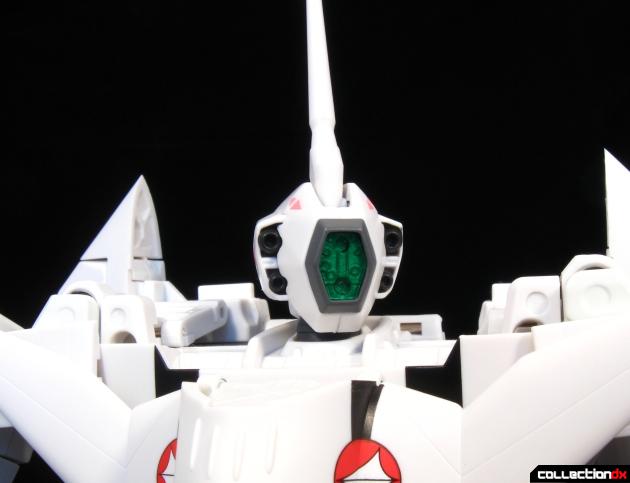 The head is done right with crisp paint apps and a clear plastic window over a detailed camera. 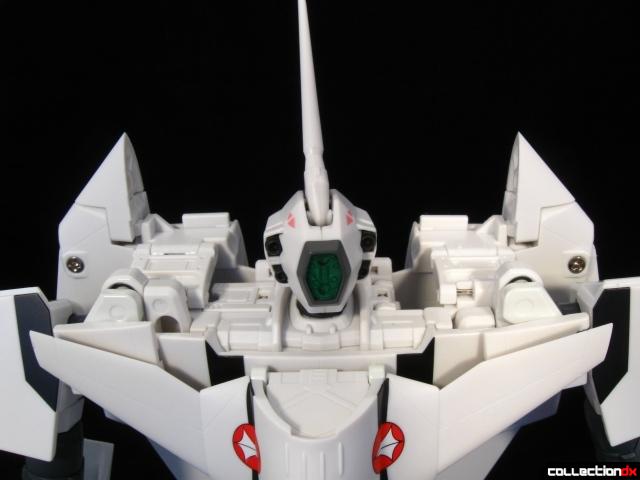 The collar area features additional flaps to fill in the upper body. There are also sliding blocks that lock the shoulders in place so you won't accidentally use the transformation joint. 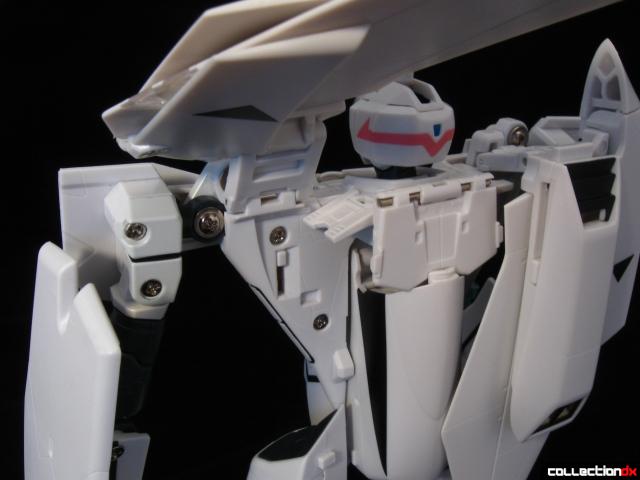 The shoulder locks are engaged via a sliding tab under the chest plate. 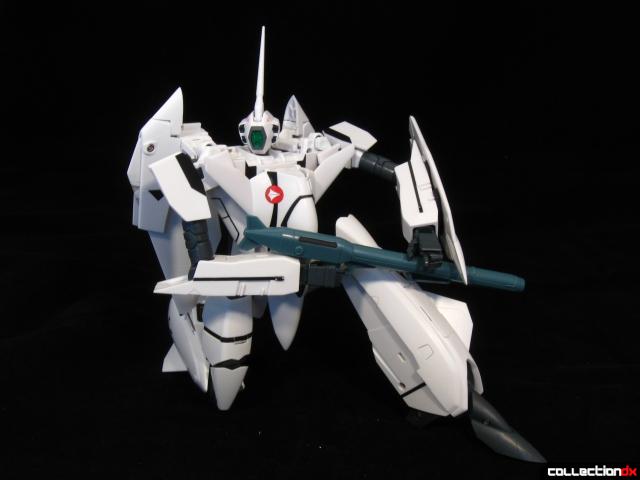 Thanks to the compactness of the design, the VF-11C can achieve a fairly good kneeling pose. 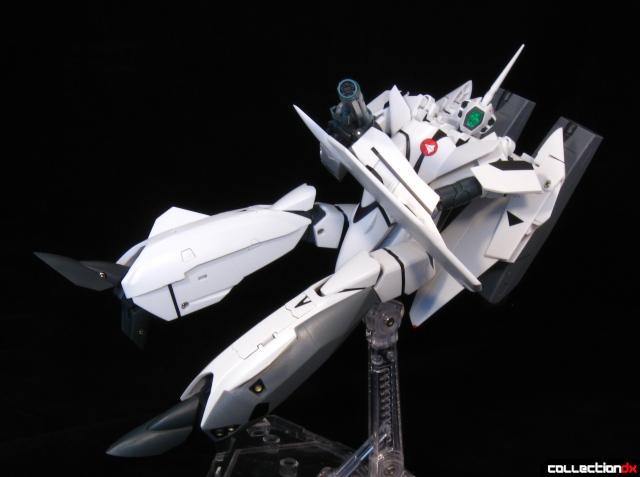 The toy also comes with a stand adapter for Battroid mode. Simply snap the adapter around a pair of raised bumps in the hip area and you're good to go. Again, the Mighty Block and VF-11C work well together. 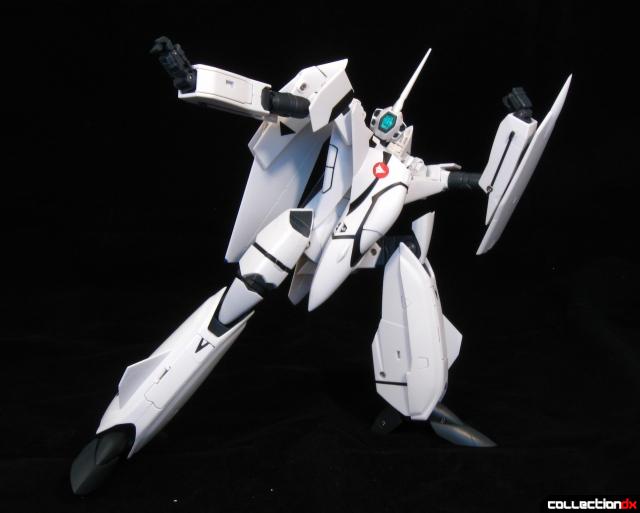 The VF-11C is simply a fun toy to pose. All the joints are tight and smooth. 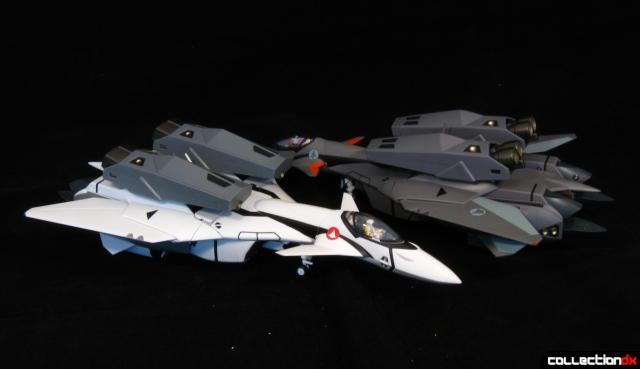 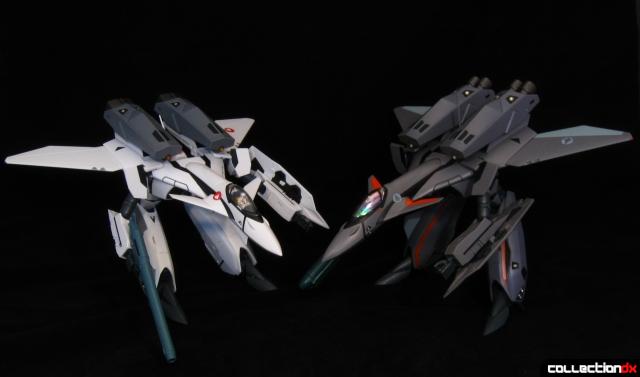 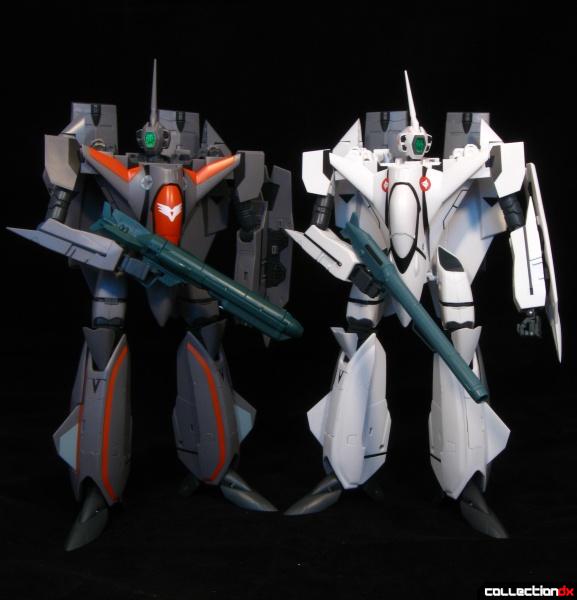 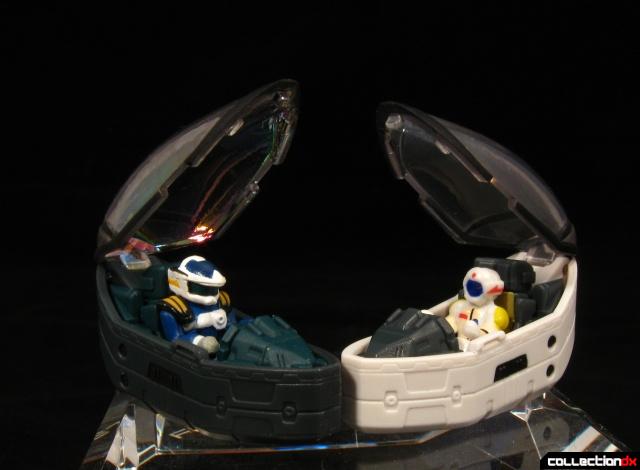 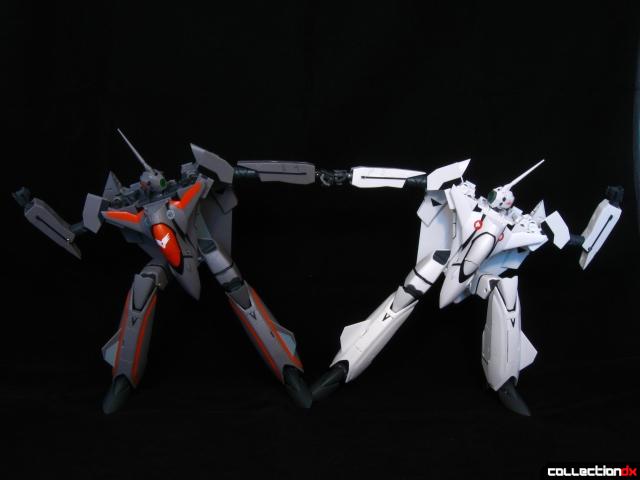 LOOK! THE EAST IS BURNING RED!

I find both VF-11 toys complement each other very well. There's enough appreciable differences between them that having both doesn't feel redundant. Plus the 1/60 VF-11 is so well done you don't need much of an excuse to get another. 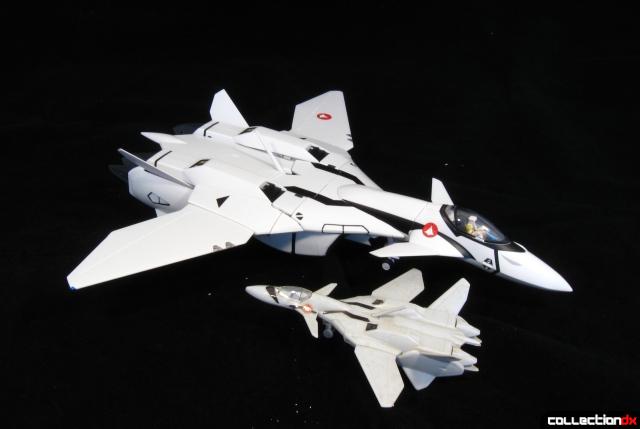 And here it is with its ancestor, the Bandai 1/144th scale kit. 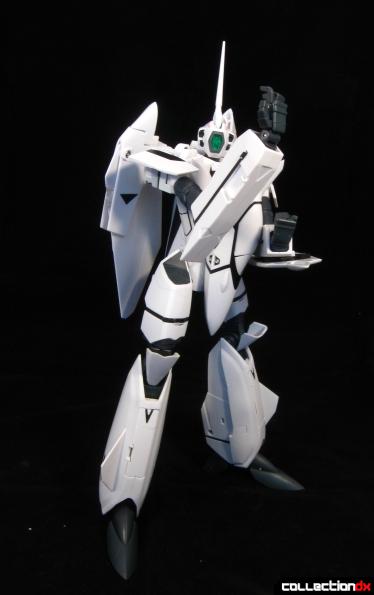 Yamato's VF-11C is a clean, simple design that works well in every form. Between my review and Prometheum5's all I want you to know that if you can only get one Valkyrie toy from Yamato, get this one. Both the VF-11B and VF-11C are top class toys of a solid design.

This toy's a very pleasant shade of white to look at. I think I still like the VF-11B a little bit more but man is this still a really nice mold...

The VF-11 has been my favorite Macross design since forever and you can’t go wrong with either the B or the C. If I had to nitpick the C a bit the only thing I would say is it needs some color on the heat shield in battroid mode as I like how on the B it has the orange with the decal. Might look into getting a sticker on there or something personally, but again just a minor nitpick.

Nice review, and yes I would also echo the recommendation that people should buy this mold as it is practically perfect.

Wow, that thing is simply awesome. I love it.

It could've been the way it was engineered. The design of the Macross Plus 7 VFs are way more complexive than the 80s VFs. That's my assumption.

I do agree, the VF-11C looks fabluous. It's as white as a pearly swan.

After watching the video and reading the review, the 11c is really cemented as necessity in my collection. I was having a hard enough time pining over it as is :(

Gorgeous. Wish I had a money tree.

If counterfeit money were legal I would buy one.

I'm not a fan of Macross because I've never actually taken the time to watch it, but I do generally like the various valkyrie designs when I see them and this particular toy's neat design along with this nice review makes me want to buy this thing. I can't, but man, if I had a spare $200 lying around, I'd probably go and order it. At the very least, I do feel like giving Macross a try now.

I had heard that Mighty Block didn't work well with Battroid mode, but you're using it just fine. Will it work for pretty much any Valkyrie, or only with the VF-1 or VF-11? I figured I'd forget about saving and buy all three VF-22's, so I figured I'd want at least one stand.

OK, first I watched and read this review when it was new, which was about a year ago. What sucked, was that that time period happened to be about a day after I had just ordered the B version. As you guys can imagine, because of cash and just wanting a variety of mecha, I held off on getting it. Anyway, after watching your video review for the millionth time, I bit the bullet, and baught it. OMG VF5SS, wasn't joking when he said this is one of Yamatos best. With out a doubt this is the most beautiful Valk. I've ever owned. As far as Yamato goes, this thing is second only to the Macross / SDF1.
What blew my mind is how distinctively different it is from the B version. I love the B, but the white C version really justifies it in the Macross universe. The grey paint scheme on the B just has cohesion, although a great toy, the C really is the bomb. Great review by the way.