The Turn A Gundam design is one of my favorite Gundam designs, largely because of how “out there” it is. It’s aesthetics are nothing like any other Gundam seen at the time due to Syd Mead being the mecha designer.

I’ve never seen the anime, but the combination of Syd Mead’s design and Yoko Kanno doing music puts it right at the top of the list. I’ve heard that if you are a diehard Gundam fan, you might not like it, but that sounds exactly WHY I would like it.

This particular toy is part of the Robot Spirts line by Bandai. This is actually a special release. The first Turn A Gundam Robot Spirits release came in the original color scheme, released in October 2009 for 3,150 yen. This new version looks to be the same, right down to all the accessories, with the addition of a silver paint scheme – this time for 4,725 yen. Oh, and the box is different. Yay. 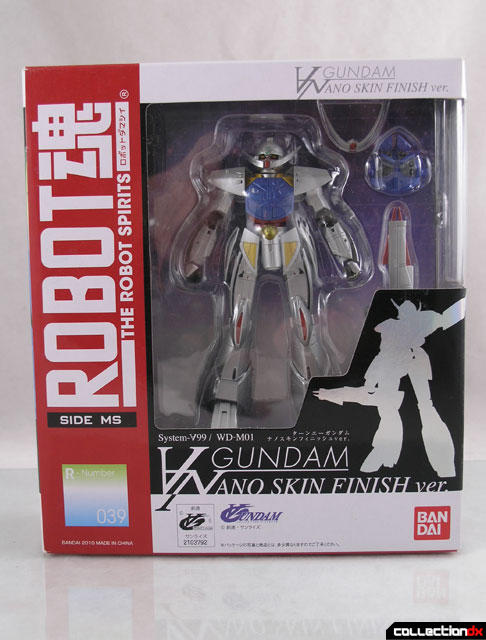 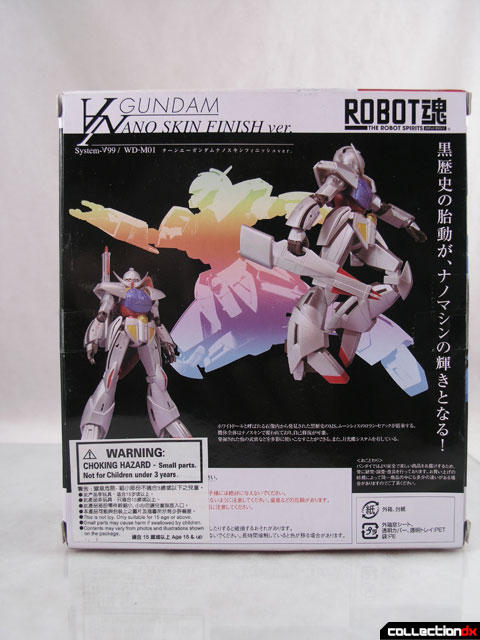 Fortunately though, the silver paint scheme is awesome. It just looks so sharp like this. This one is labeled “Nano-Skin” version – a reference to the Nanomachines that power the Turn-A. 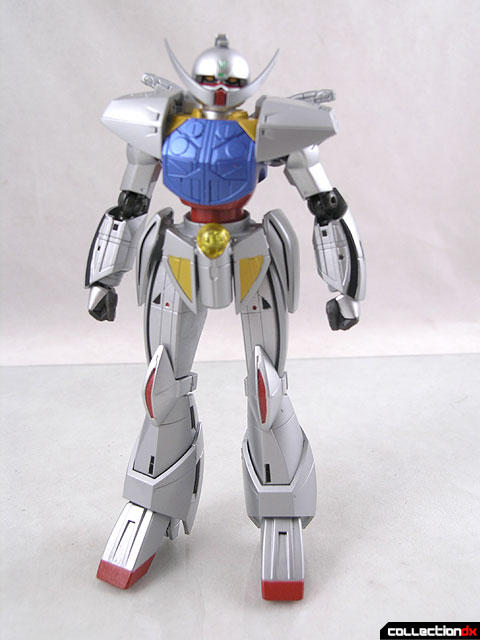 The figure itself is great. The joints feel solid and it moves just right. 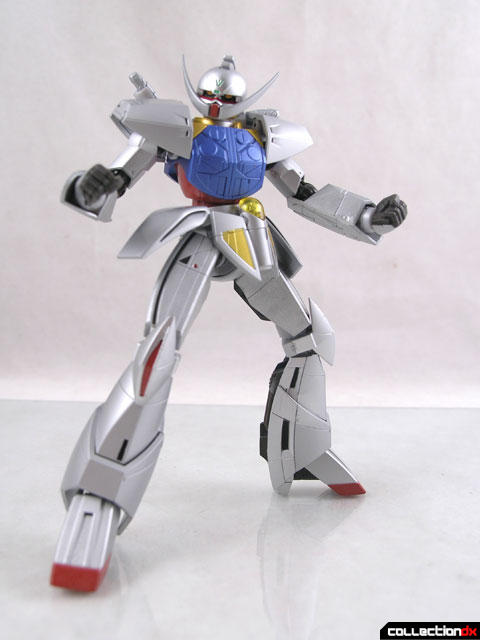 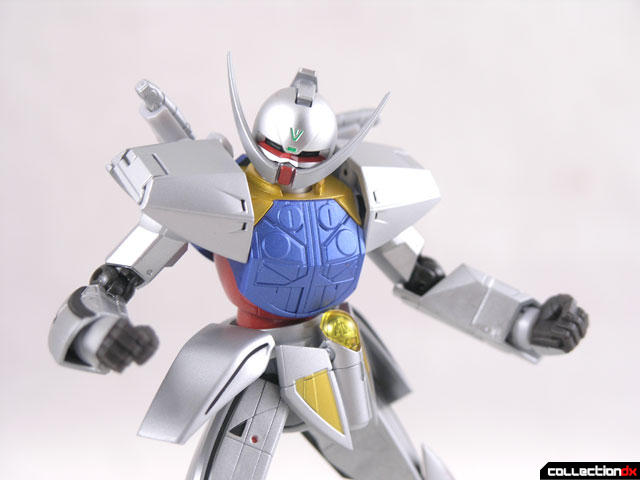 The chest features a removable chest plate that can be swapped with one depicting all the compartments open and weaponized. 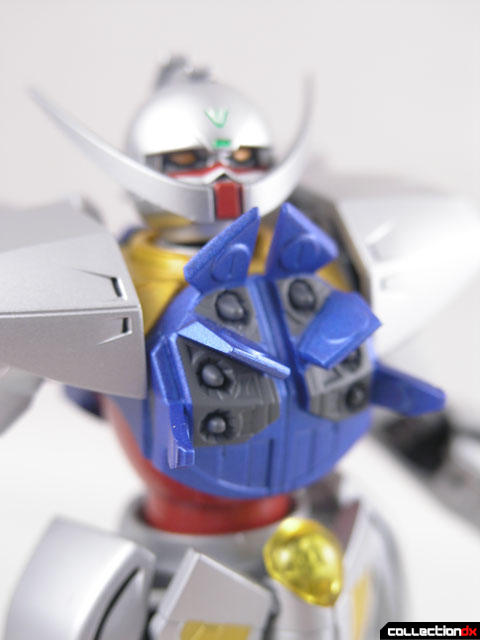 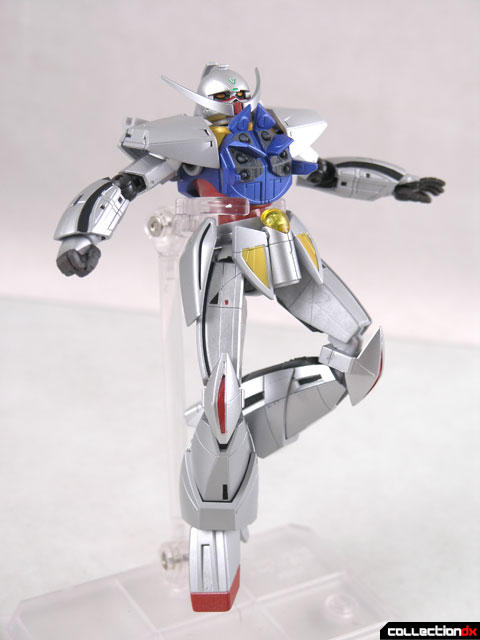 Each shoulder features a non-moveable shoulderpad. If you had the New Material Turn-A, you might remember those are infamous for breaking off. It’s nice to have a version of the design where I don’t have to worry about that. Shoulders, elbows, and wrists are all jointed, with a fantastic range of motion. 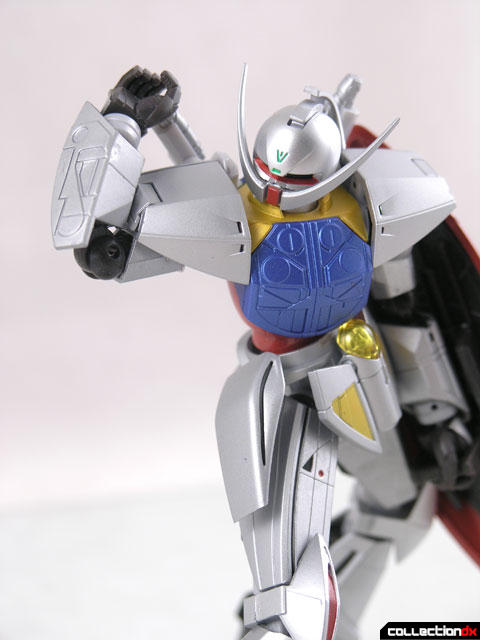 Variant hands are included: an open set, a grasping set, and the default closed set.

The waist has the non-removable core fighter with the clear dome and movable wings. The hips have skirts on the side which pop off frequently during play. 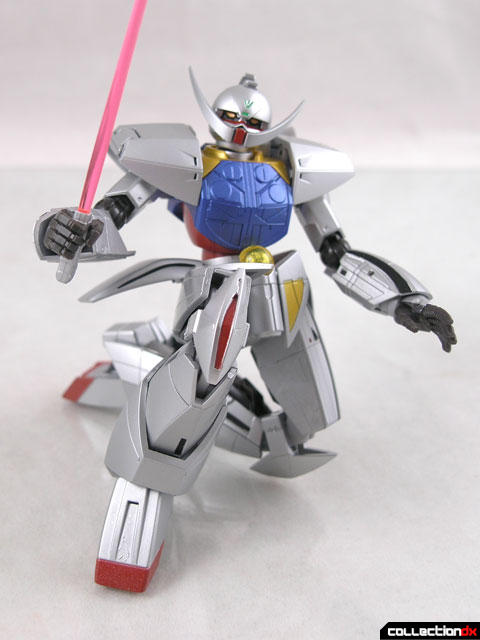 The legs connect to the hips via ball joints, the knees are double jointed, and the ankles have a wide range of motion with a unique ankle joint. The backs of the legs have interchangeable panels. I think these are the Nano Particle generators, but I am not sure of the significance of the difference between the parts. 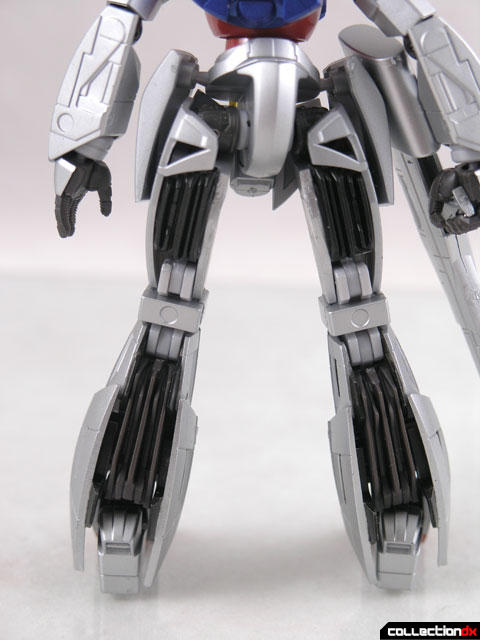 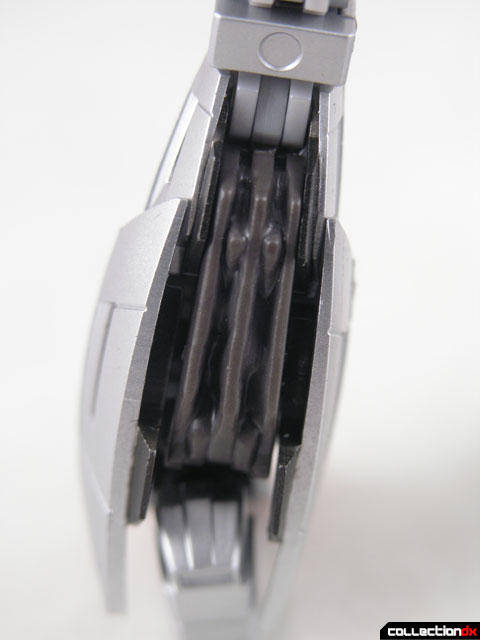 When it comes to weaponry, this figure has you covered. 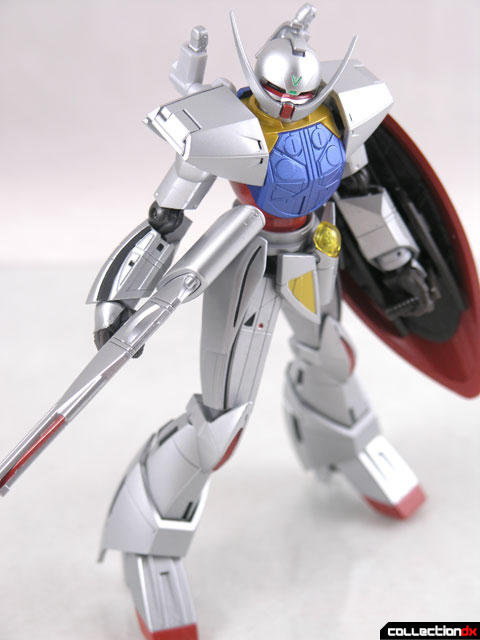 Turn A is equipped with two beam sabers with removable hilts. When not in use, the hilts can be stored on the back of the figure. 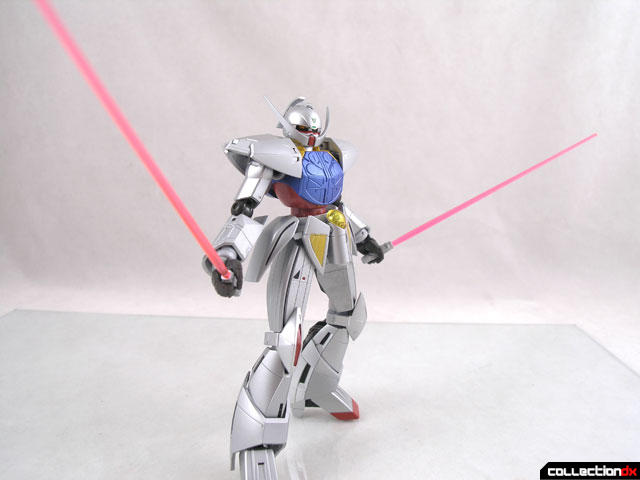 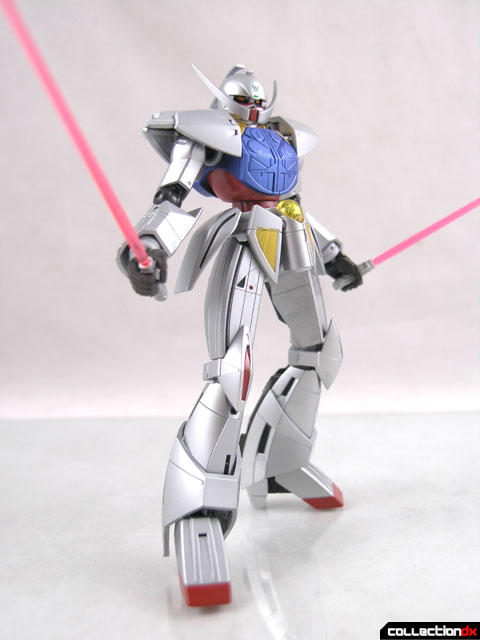 There's an assembly that can be attached to the back of the figure that can store the rifle and shield when not in use. 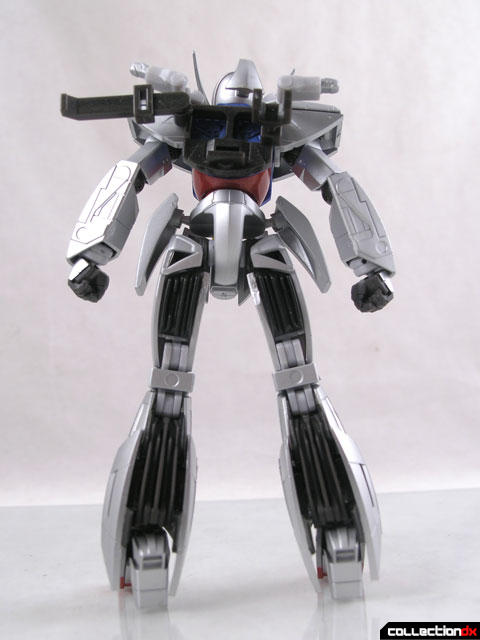 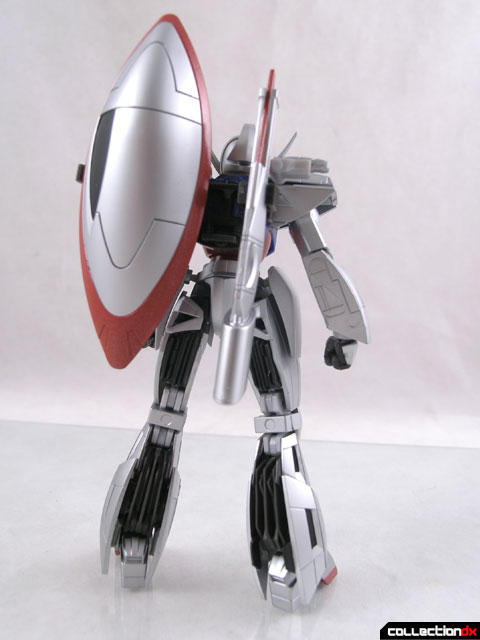 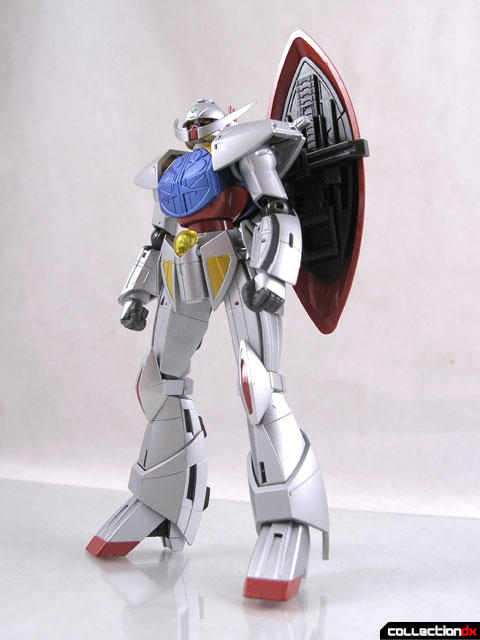 The shield can be attached to the arm, and has fold down sides and a fold out handle. 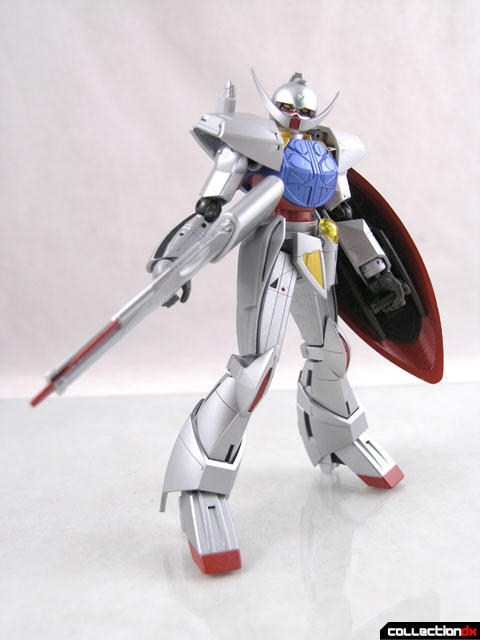 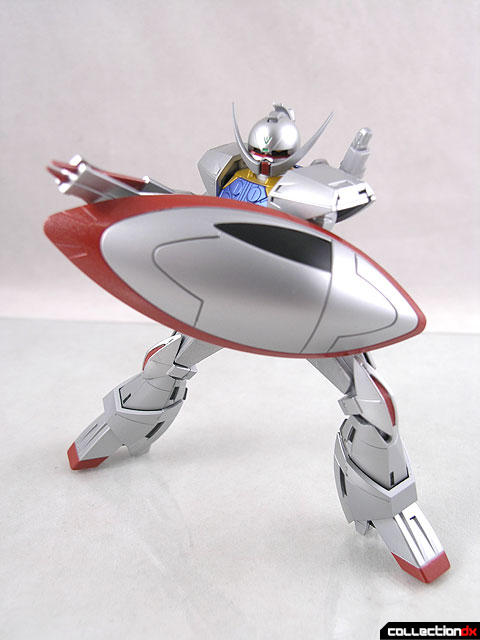 The rifle has a folding handle, as well as a collapsible end. 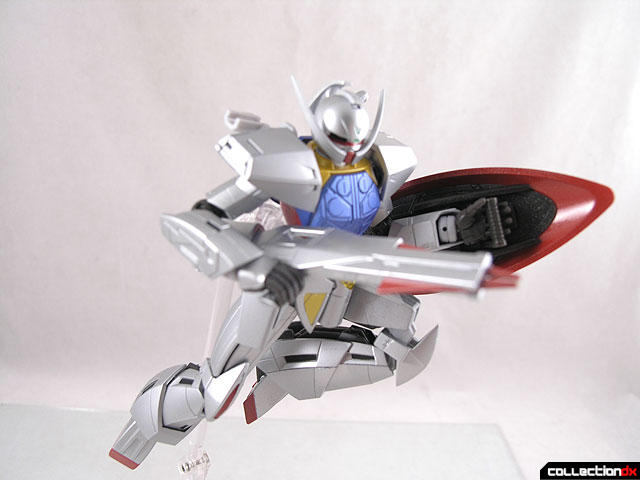 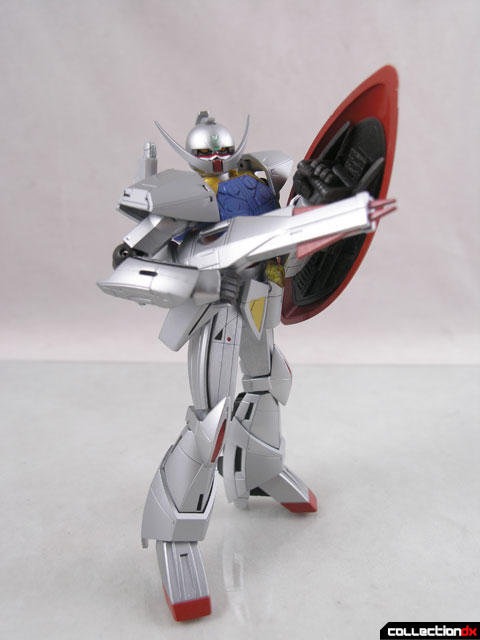 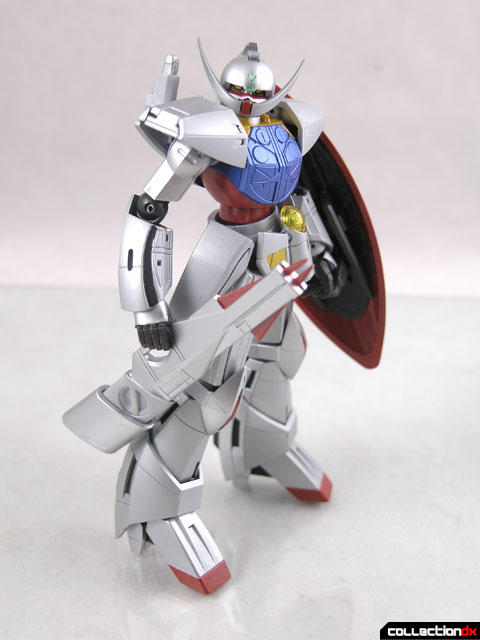 One thing this is missing is the ball and chain weapon. It’s a really cool signature weapon that is omitted from this release. 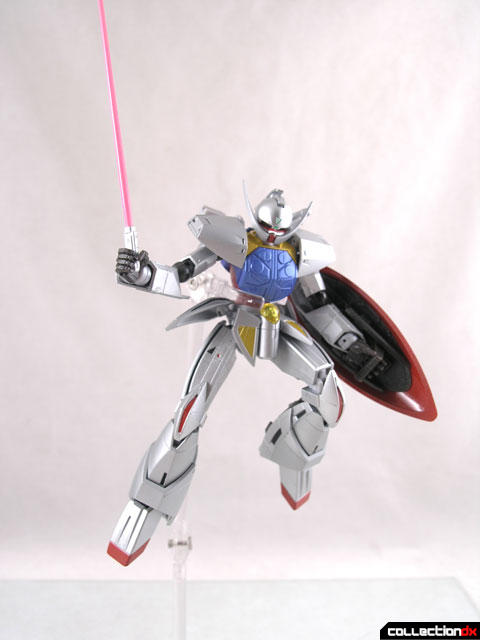 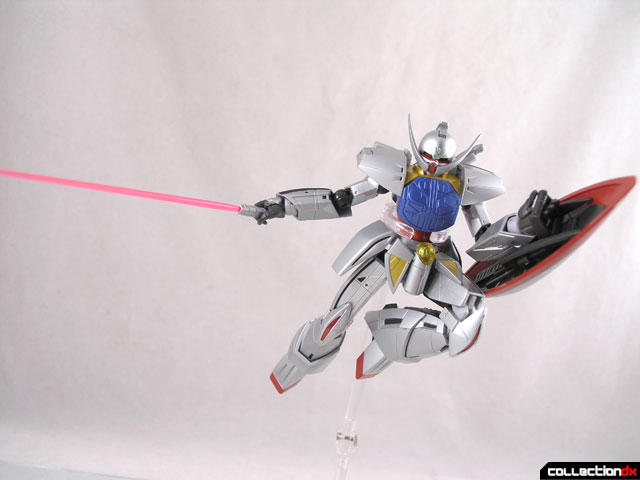 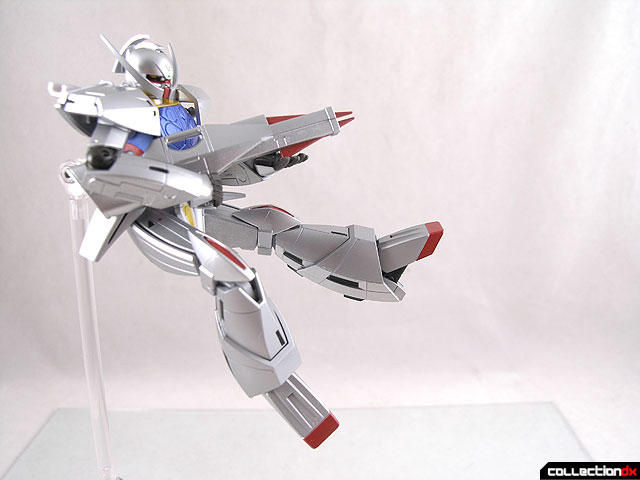 "I’ve never seen the anime, but the combination of Syd Mead’s design and Yoko Kanno doing music puts it right at the top of the list. I’ve heard that if you are a diehard Gundam fan, you might not like it, but that sounds exactly WHY I would like it."

Well, Turn A finally got licensed this year by Bandai Ent. I've seen the compilation movies many years ago and I liked what I saw. I agree, it being different is what makes it appealing.

Hmmn, maybe I should do a review of the Robot Damashii Gundam Unicorn (Unicorn mode) I got last week.

I would probably fit the label of 'hardcore gundam fan', and I love Turn A. Personally, it ties with Zeta for the No.1 TV series spot. Any chance of a Turn X review coming up?

Argh, beaten to the punch! I've got the plain version of this and been meaning to do a write-up for some time, but JoshB got there first. Teach me to procrastinate...!

Turn-A Gundam should be enjoyed by *everyone*, whether they are a hardcore Gundam fan or not, or even a mecha show fan or not. Its one of the best science-fiction - not just anime science-fiction, *any* medium - stories around. It really, really shows how to *truly* re-invent a franchise. It has its faults - it wouldn't be a Tomino show if it didn't - but the pros by far outweigh the cons.

I remember when the design of the Turn-A first emerged. We all laughed, didn't we? And then hated it.

Well, I repent. It makes so much more sense when you actually see it moving, and it will *still* be talked about long after the latest FreedomStrikePeaceWing-Gthing has been forgotten. Its now my favourite ever Gundam design, just ahead of the RX-93 Nu-Gundam...

I love the figure, I think i would get one soon!!

about gundam models, do you see the GFF Unicron gundam Prism Coating ver.??

I just saw one review in japanese language, it would be great of you can do a review of that great figure!!

I love the design Syd Meads design since it really was different from the rest of the Gundam's yet it came out perfect.

I've only seen the compilation movie of this but my god it was cool IMHO ^.^

Couldn't agree more. Those who don't like the design are simply oldtypes held down by gravity who can't understand the awesomeness of DAT MOUSTACE.