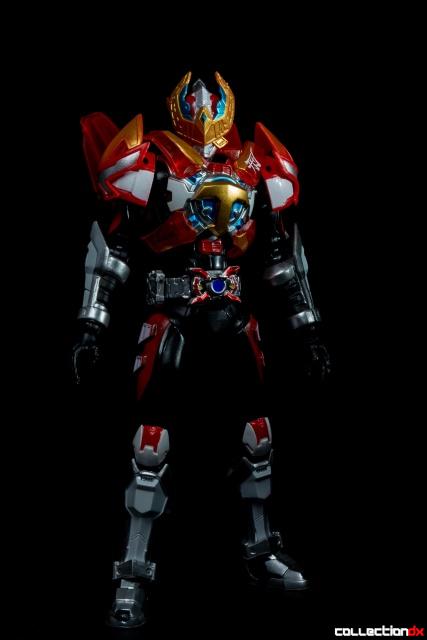 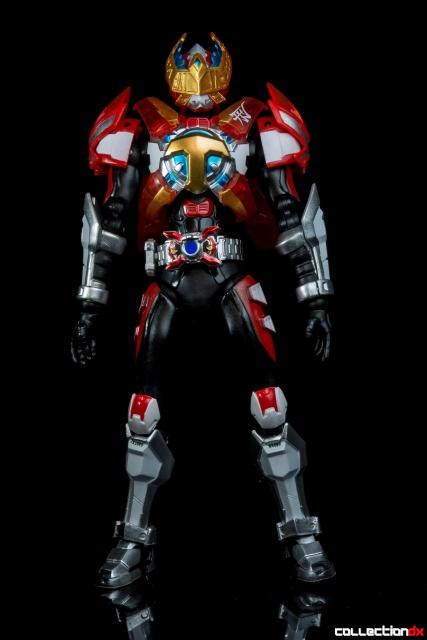 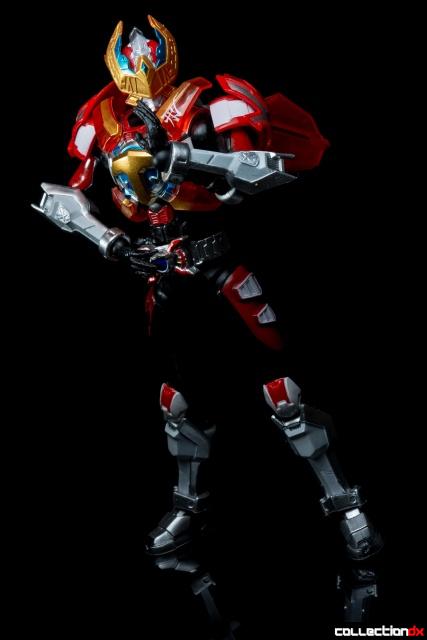 Titan Mars Hero takes inspiration from a number of recent Kamen Rider series. The head reminds me of Ryuuki/Knight, while the chest and sword remind me of Hyper Kabuto. The accessory on the side of the belt is apparently a knuckle weapon similar to the Faiz shot from 555. 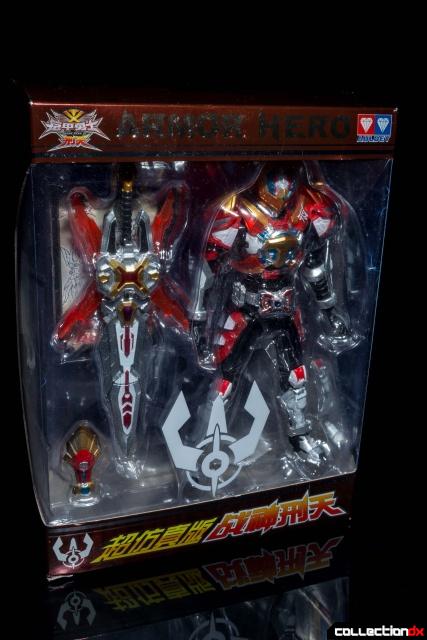 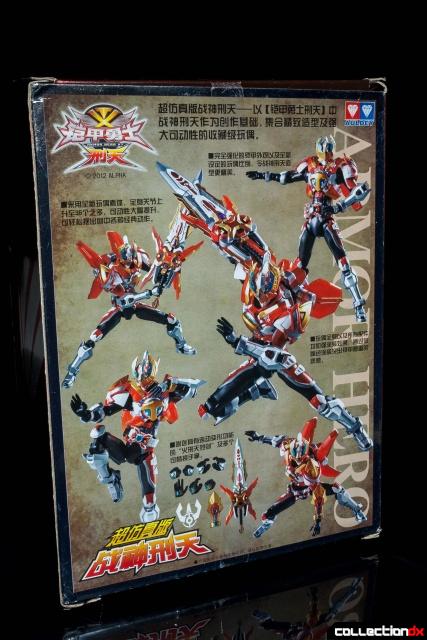 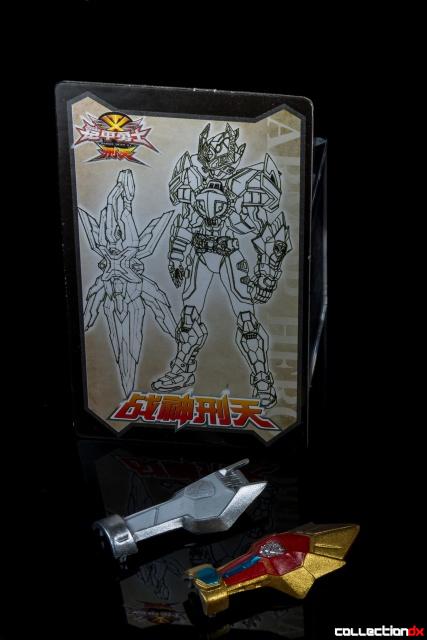 Considering the figure is a Chinese produced toy, the packaging is surprisingly nice and reminds me of the SIC packaging. The figure includes 9 hands, an alternate left armguard, figure card, sword, and the figure itself. There are two regular closed fists, two regular open palms, and two regular open fists. Three additional left hands are included with a different pattern for use when the alternate armguard is attached; an open fist, closed fist, and open palm. The alternate open palm has gold and blue paint apps on the back of the hand, while the other two alternate hands do not have any paint apps. The back of the box shows that all three alternate hands should have gold paints apps. I’m not sure if this is a factory error or intentional. 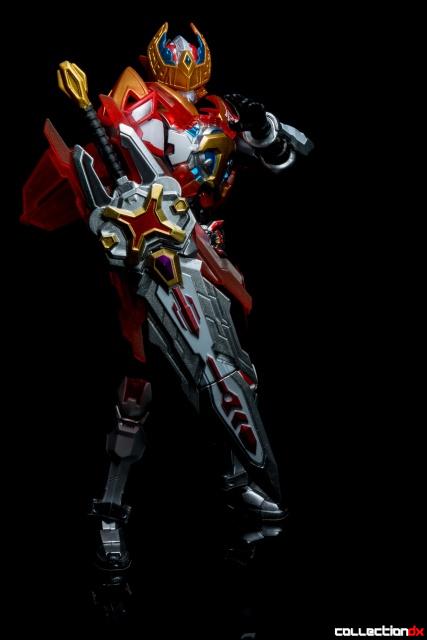 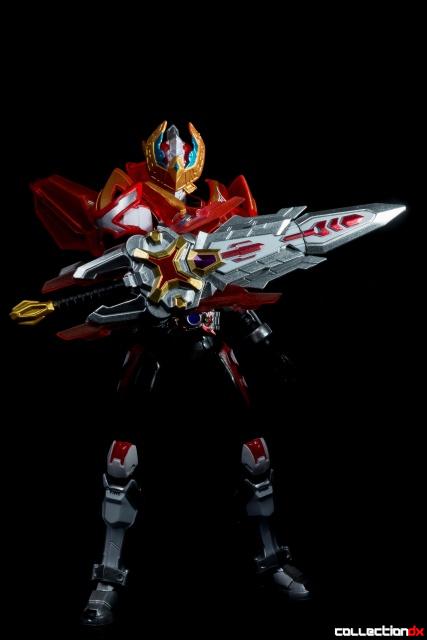 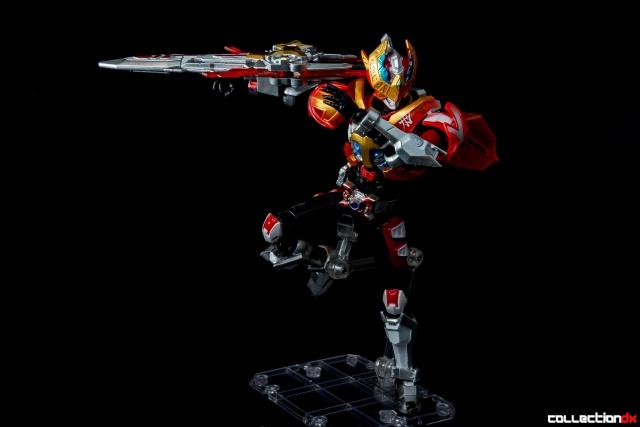 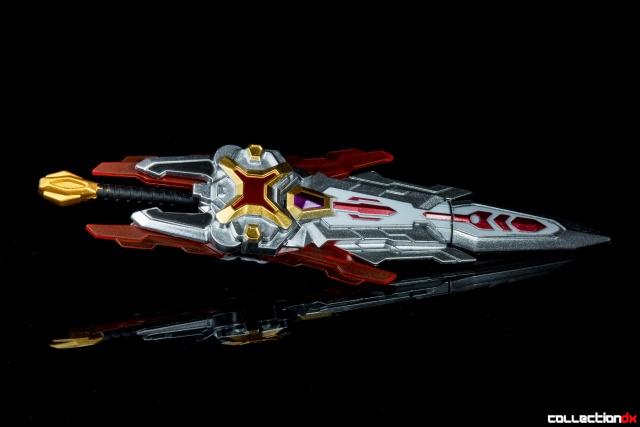 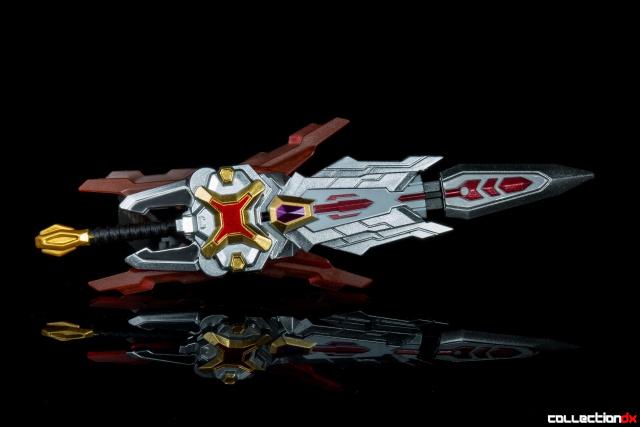 Titan Mars Hero has two forms. His first form has the sword attached to either arm as a shield type weapon. 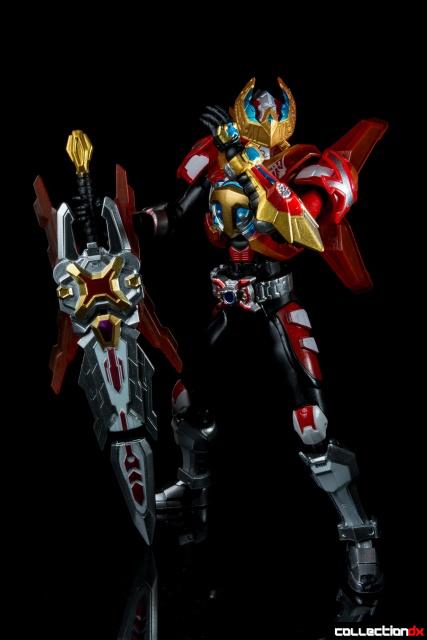 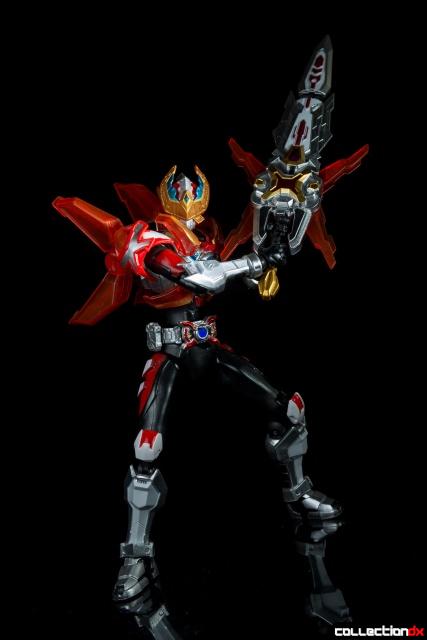 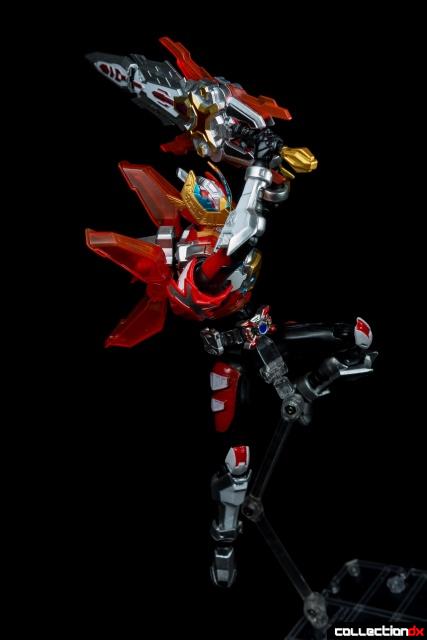 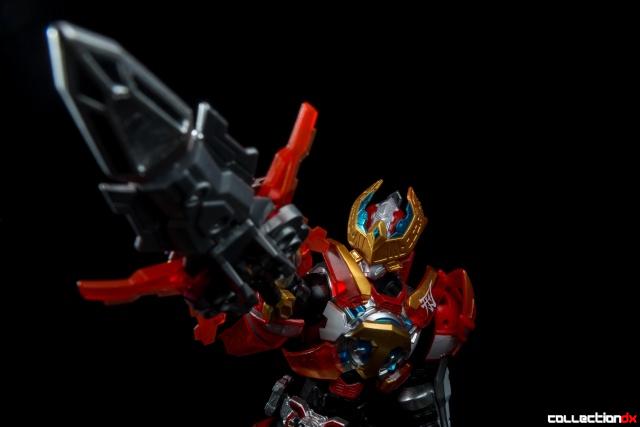 In his second form, Titan Mars Hero’s sword expands and the back pods open up. His left armguard and hands are also replaced with their powered up versions. Pulling the tip of the sword out allows the base to expand and the translucent red parts to pop out. The gimmick works fairly well but does not lock in place when expanded. 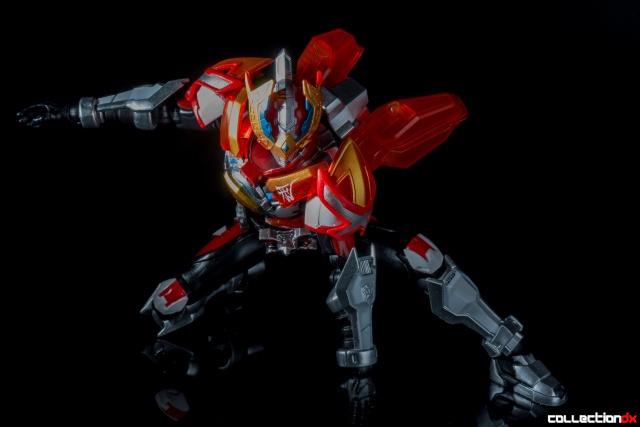 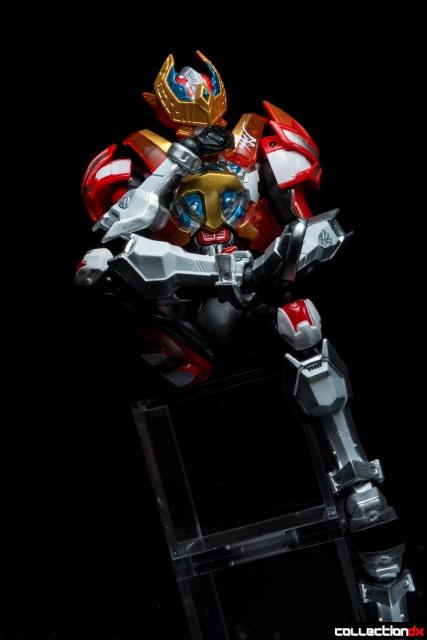 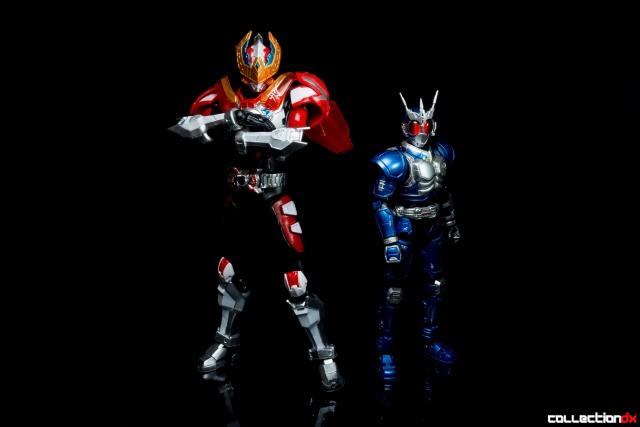 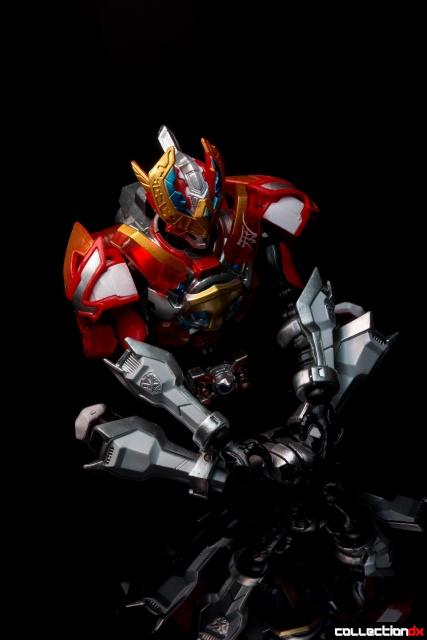 Articulation for Titan Mars Hero is excellent. The main issues with Auldey’s previous attempt at a SHF style figure in the Ultra Beast Force line seems to have been fixed. The ankles are now Revoltech style joints that allow it to actually stand in more expressive poses. The figure has all the same points or articulation as an SHF, with the addition of an extra hip joint that allows the leg to extend out of the pelvis. Titan Armor Hero stands about two inches staller than the typical SHF figure.
The only issues I’ve had with Titan Mars Hero are with the paint apps. The lack of gold on the alternate left hands is a little disappointing and some of the paint apps on the legs seem to have been too thin so some black shows on the edges. Since I don’t have other Armor Hero figures to compare this with, I’m not sure if these QC issues are widespread of just a one off.
Overall, Titan Mars Hero is an almost perfect attempt at making a SHF style figure. I really like the design, which takes cues from various Riders while staying visually unique. At around 10 dollars before shipping, Titan Mars Hero is definitely worth the price. The figure is better than anything Bandai America will ever put out and almost on par with the Japanese figures it tries to articulate. With the new Armor Hero Lava figures starting to show up on Taobao, I can’t wait to see just how much the Chinese toy industry has improved.

Wait, there is a line that is like SHS? I couldn't find any information about this line, I just know about this figure and Ares' after a shop imported them. Can you give me some pictures about the SHS-like ones? Are they cheaper? How is their articulation?

I don't own any of them, but judging from the pictures, they do have some pretty good articulation. They should be cheaper than the bigger figuarts versions, but prices tend on fluctuate between both extremes depending on the seller so I can't say for sure what the retail price should have been.

Well, I could get one of the Titan for 17$, and I might go with it, since the smaller ones' details are just like BOA's 4in, although they are more in scale with SHF