I remember when the promo pictures for Kamen Rider W first came up. I thought he looked incredibly neat, with the rather simplistic clean design and the gorgeous v-fin on his helmet. Then I also learned that Kamen Rider Decade was going to be only 30 episodes long, and that Kamen Rider W would start right away after that. I also then learned that W's gimmick was that it was "Two Kamen Riders in one body", which let's be honest, sounds a bit awful. In addition, he was going to switch forms constantly, which made me worry more about the show. I couldn't help but scoff at the notion and just be angry at Toei for not giving my more Kamen Rider Decade, especially when that show ended as poorly as it did.

So when Kamen Rider W first started airing, I actually did not want to get into it. I watched the first few episodes and laughed at the ridiculous CG dinosaur, and thought it was going to be another whacky comedy focused Rider series. I was terribly wrong.

As the months went on, something happened. I started really liking the show, and it quickly grew to become one of my favorite Kamen Rider series, to the point where I even liked it more than Decade! The style and setting of Kamen Rider W became one of my favorites, and almost all of the characters I grew to like in one way or another. So it was only inevitable that the S.H. Figuart for Kamen Rider W came out, I had to get it. 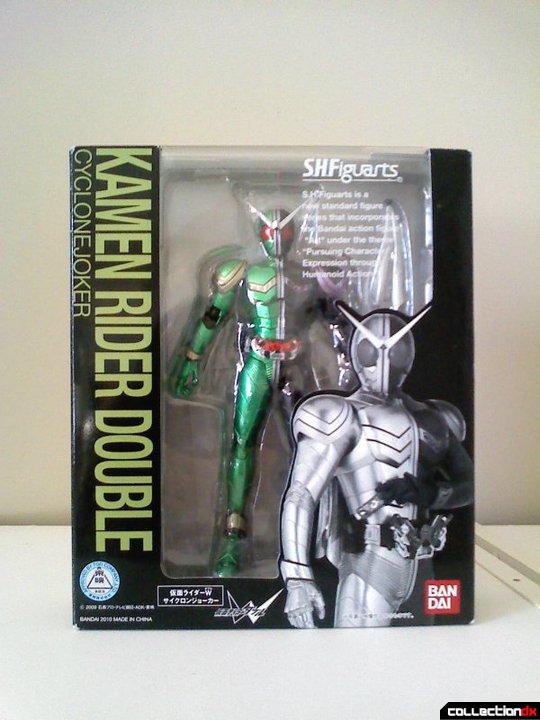 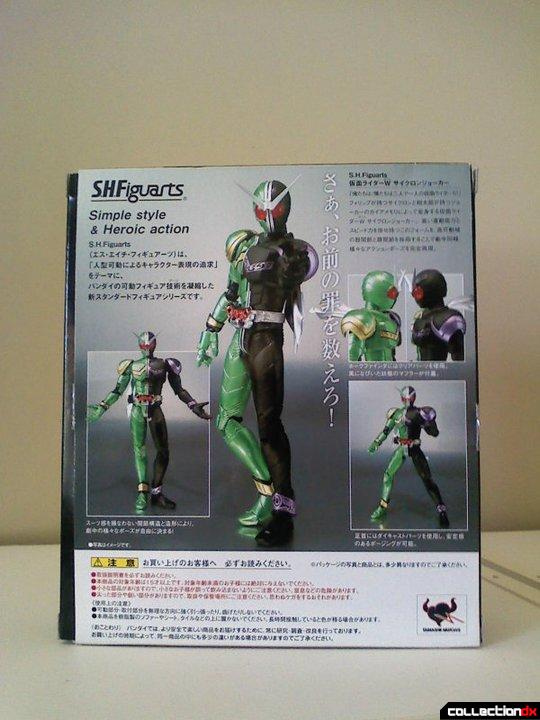 Kamen Rider W Cyclone-Joker is W's basic form. The packaging is like all other Kamen Rider S.H. Figuarts boxes, with a simple window and a shot of the actual actor's suit. The back features some nice pictures and familiar poses of Kamen Rider W. 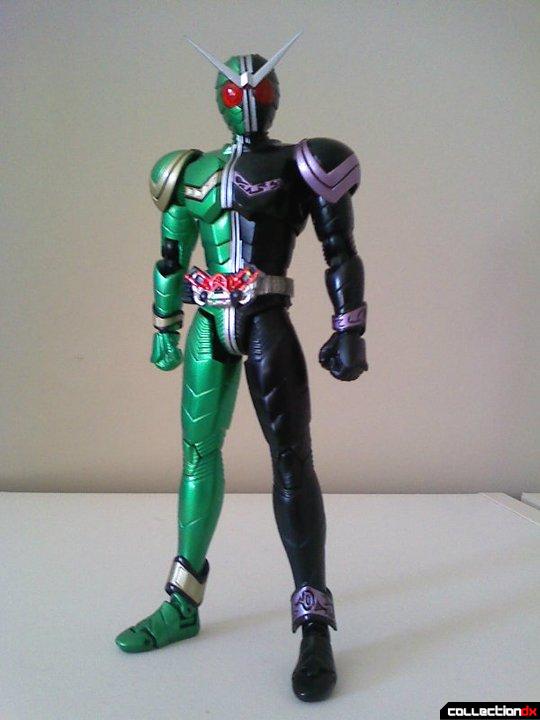 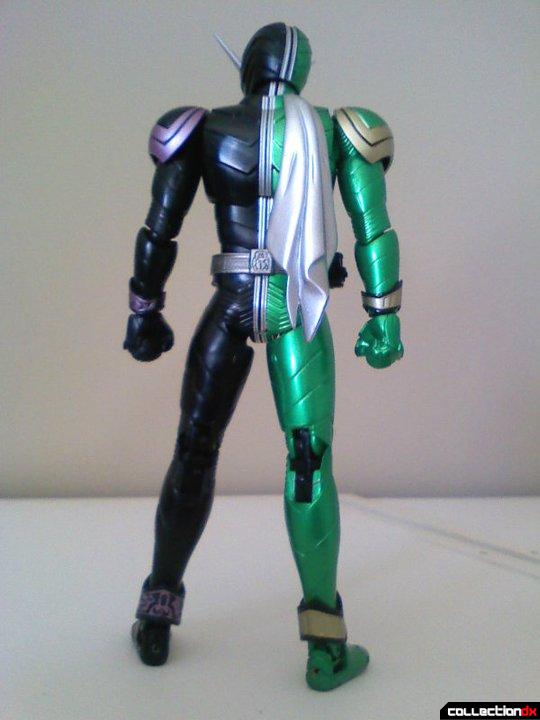 Out of the box, Kamen Rider W feels great in your hands. He has a bit of heft due to the bulky-yet-slim character design. The simplicity of the design really shines here, with nice sharp details. Although there's nothing especially elaborate about Cyclone-Joker, he has everything he needs. 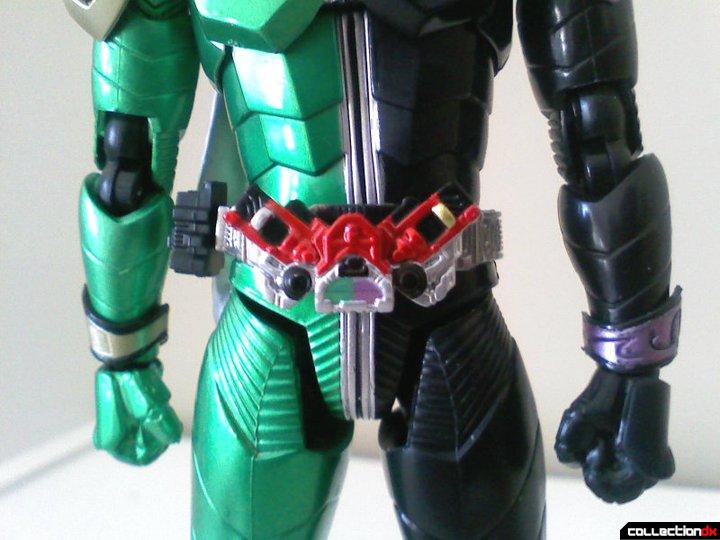 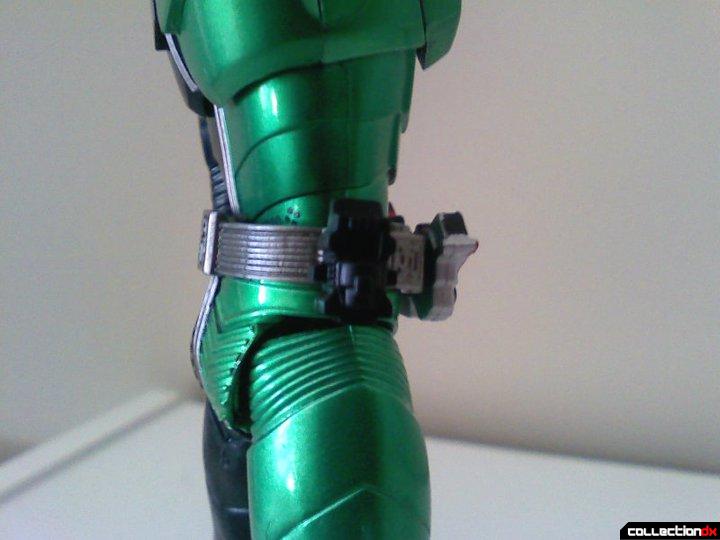 On the right side of W's hip is his Maximum Drive slot. Kamen Rider W uses this to engage in his finisher attacks. It's just a tiny molded piece of plastic, but the extra detail is nice. It tends to pop off fairly easily though, so some users may want to consider gluing it into place. 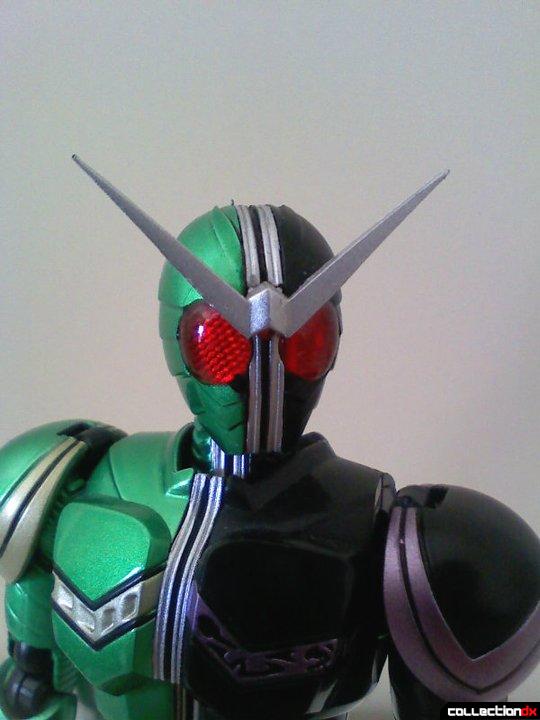 A nice glossy green paint covers the right "Soul side" of Kamen Rider W. This paint shines wonderfully under lighting, and the soft yellow accents really help make this side. 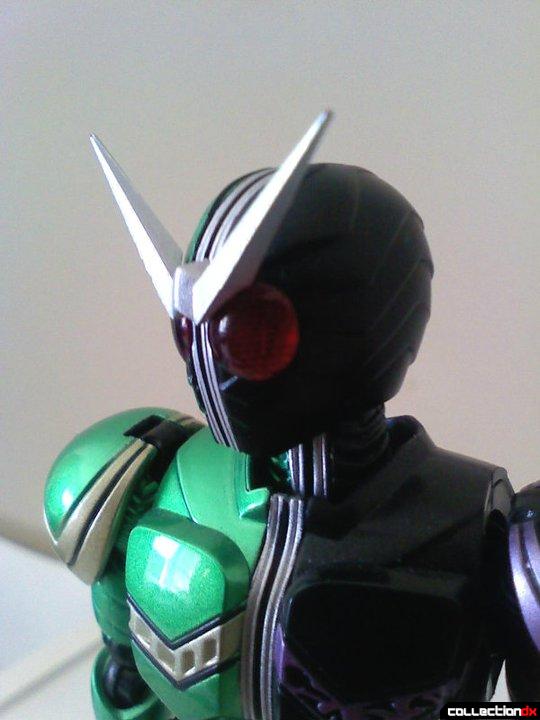 The "Body side" of W is in a much more muted black. Although it isn't a matte finish, it's just slightly less glossy to make the Cyclone side of the armor shine that much more. The purple accents for this armor really add some great pop to the otherwise bland black side, and the intricate flowing black symbols make the armor stand out. 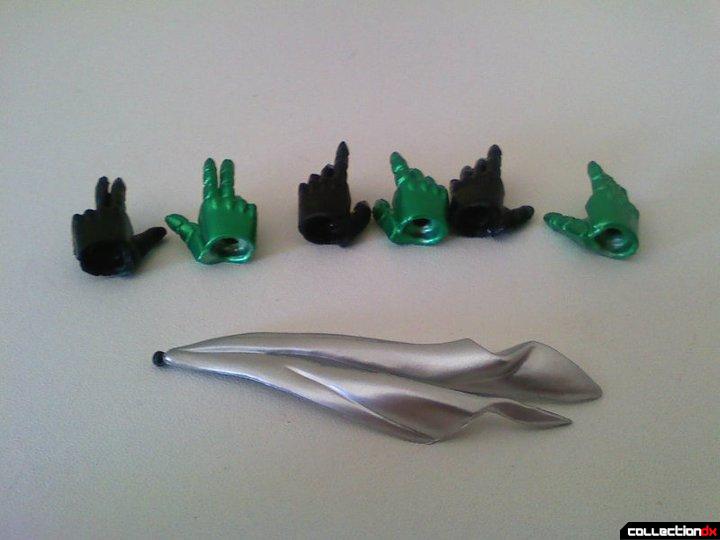 Cyclone-Joker form specializes more in hand to hand combat than anything else, so most of his accessories are hands. He comes with two different pairs of splayed hands, fists, and the famous "Count up your sins!" hands. A different type of scarf is also included to make it seem like the scarf is blowing in the wind. 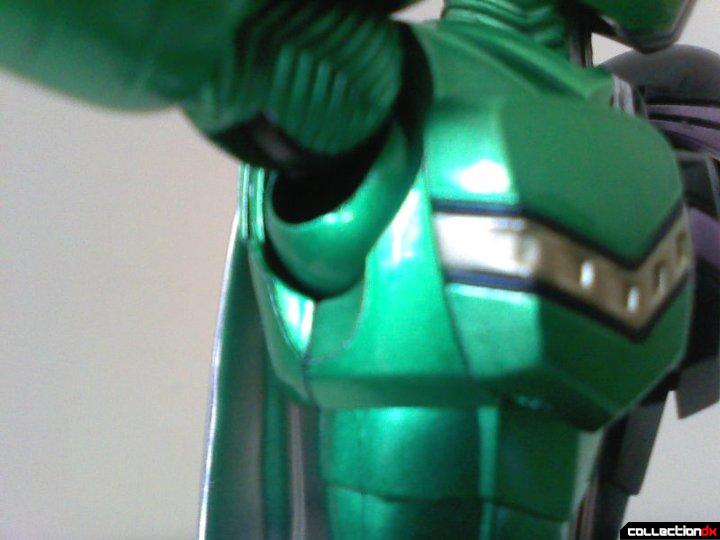 Unfortunately, Kamen Rider W marked the first instance where I've seen S.H. Figuarts have bad quality control, and it's a pretty bizarre thing that happened as well. On the shoulder joint of all Figuarts, there is a circular shell that covered the joint to keep the organic look of designs. On the Cyclone side of the armor, you can see that it's relatively snug with the shoulder joint. 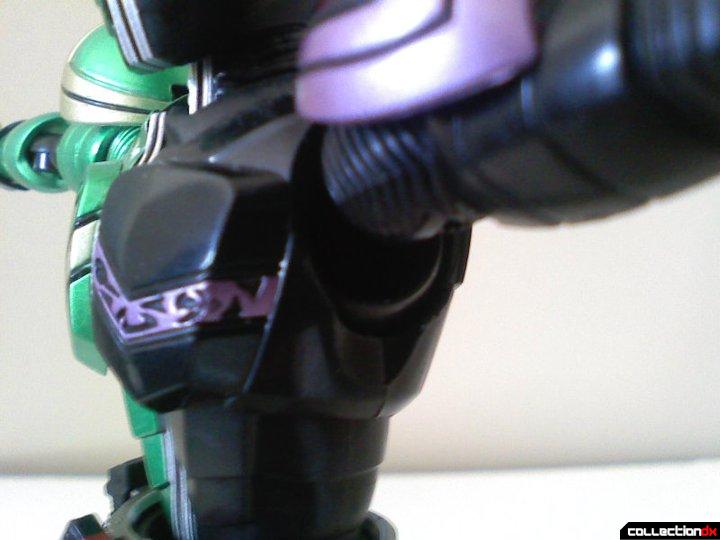 On the Joker side however, you can tell that the shell piece they used for this side is too large, which means that I need to be especially careful when moving this armor. It's truly an odd thing to see, but I'm just glad it has not impeded on this otherwise excellent toy. 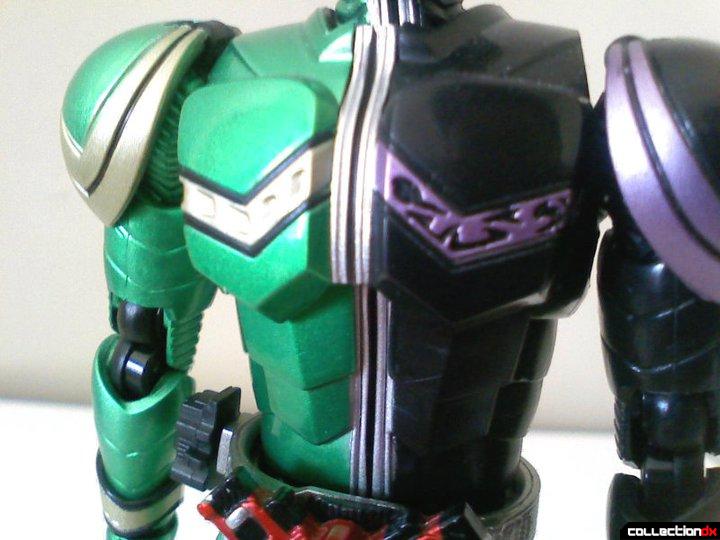 Kamen Rider W has an incredibly range of articulation, where almost everything is double-jointed. The only thing that isn't double jointed is the waist, and I don't know if there would ever be a need for that. 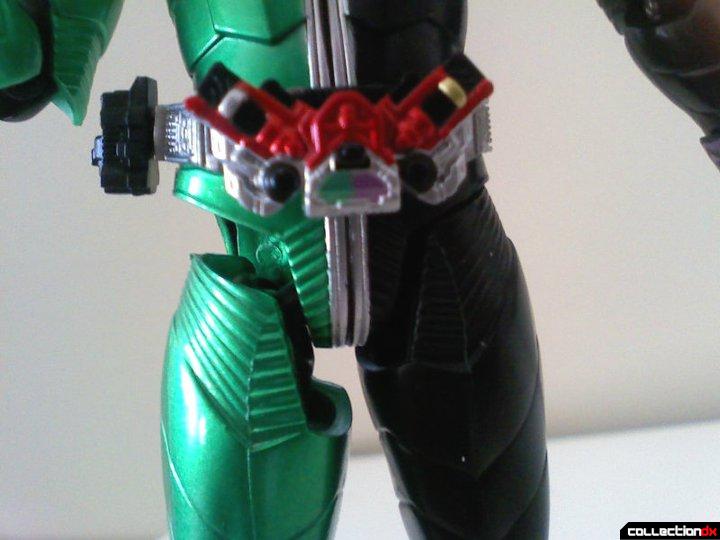 W's hip joints are slightly different from the previously review Kamen Rider Agito. Instead of being a universal type of leg joint, this one is a ball joint attached to a swivel. However, it also lies on a pull down sliding peg, to get a wider range of motion. 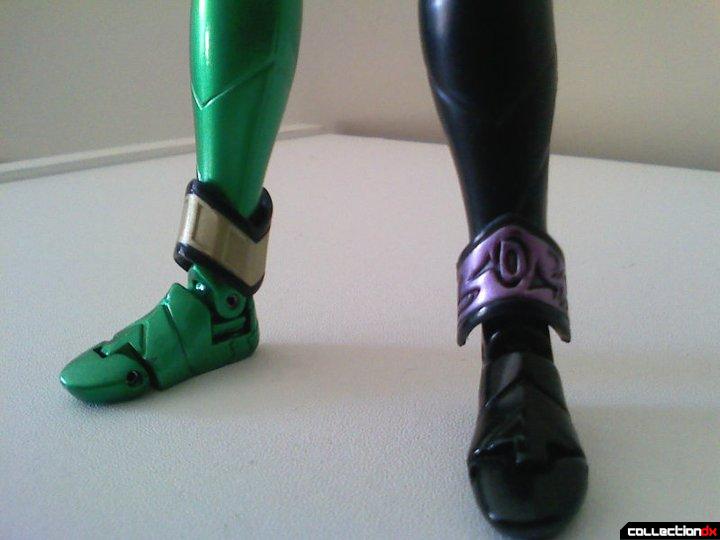 The feet are metal, as Figuarts often tend to do, and are quadruple jointed. Everything is tight, with a great range of motion. 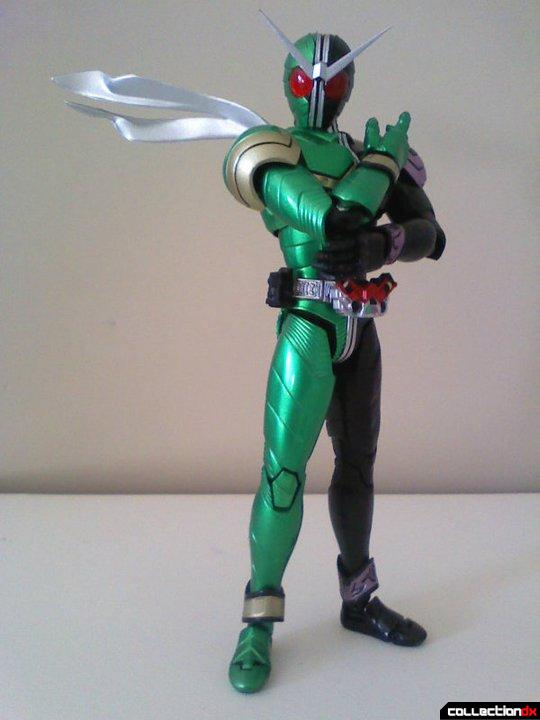 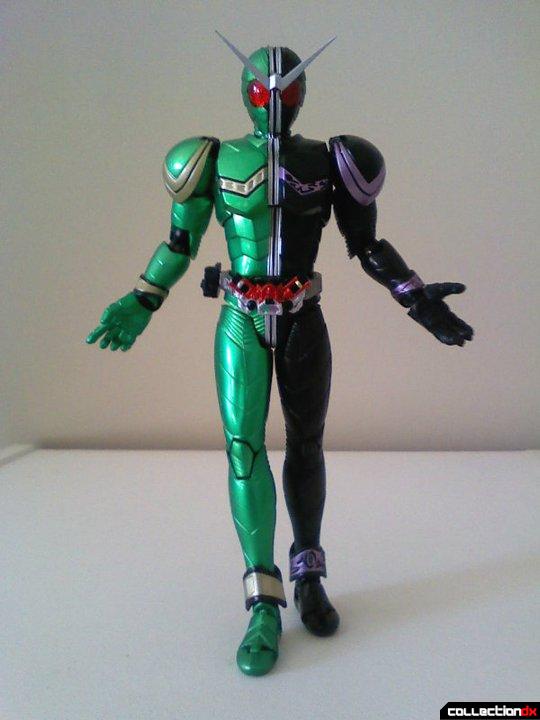 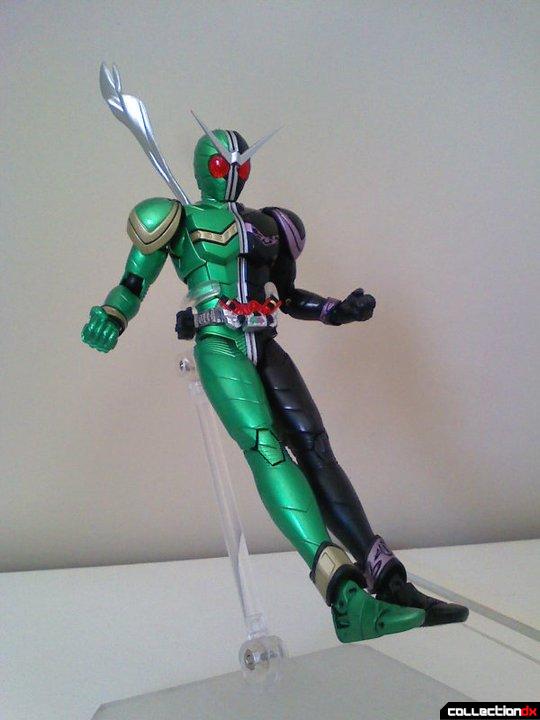 Kamen Rider W is the sort of figure that looks good no matter what pose you put him in. Whether it's his Henshin pose, the famous "Now, it's time to count up your crimes!" finger point, or just good old fashioned action poses and rider kicks, Cyclone-Joker always stands out while doing it in gorgeous style. 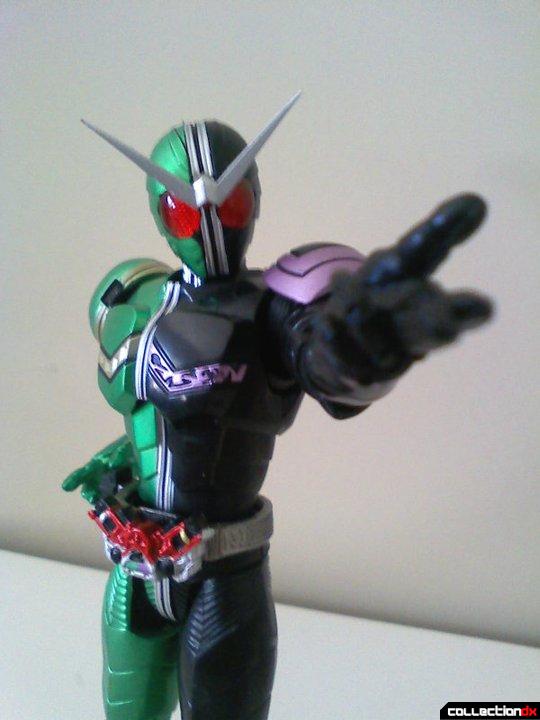 You can get your S.H. Figuarts Kamen Rider W at Big Bad Toy Store

I like how S.H. Figuarts didn't go all crazy on reinterpreting W's classic Showei-esque design.
They highlighted key points and brought them out with some smart sculpting like the pronounced chest area and streamlining the silhouette.
great review of a great figure

No, he was just the Undead Joker

I saw all of KR Blade a few years ago (and liked it!), so I know this well.

The Rider you're thinking of was Kamen Rider Chalice, who represented the Suite of Hearts in the show, and the insect design for his suit & weapons was a mantis.
The "Joker Undead" is the 53rd Undead monster, a literal "wild card" in the Battle Royal that the series follows in the modern day. Every Undead is based, in some way, on a card from the standard 54-card playing deck, and Joker (Chalice's true form) is a dangerous variable in the Battle Royal because he represents death and destruction of ALL life on Earth, not like the 52 other Undead who wish to erase humanity from Earth so that their own species can become the dominant one. (The reason humanity exists on Earth is because Human Undead won the last Battle Royal hundreds of thousands of years ago.)

Joker came into contact with Human Undead early in the 2004 Battle Royal, and as a result of winning the battle (I think Human surrendered, but IDR why), Joker captured Human Undead in a Card. Then, because his normal appearance is that of an Undead, Joker uses the Human Undead Card to change his appearance into a human form, thus allowing him to possess the Chalice powers.
Joker consciously knows what a danger he would be to the world if he ever won the Battle Royal, and so he hides himself as a human in order to avoid fighting... even if this means fighting as a B.O.A.R.D. Kamen Rider.

I will not discuss the end of the Battle Royal, which would take up a lot of space and be OT for this toy review!

I do believe his name was actually Chalice, although he was based on the Joker card from a 52 card deck.

Yeah,his name was Chalice. It's been years since I watched it,but I think Iremember the villians calling him "joker".
Doesn't really matter either way,just kind of funny that they re-used it like that.

I'm going to try to start watching this. I liked Decade,but one thing led to the next and I ended up not watching it past the 5th or so episode. that's generally what happens with all my anime/toku viewing.