Kamen Rider Kiva Emperor was the final form of Kurenai Wataru, Kamen Rider Kiva from 2008. Like the name implies, Emperor form really does look like epic and regal. The original Kiva design was primarily silver and black with chains. Instead Emperor form added some additional armor, a majestic flowing cape and lots of gold everywhere. It was a pretty drastic aesthetic change, but a very pleasant and cool looking final form. 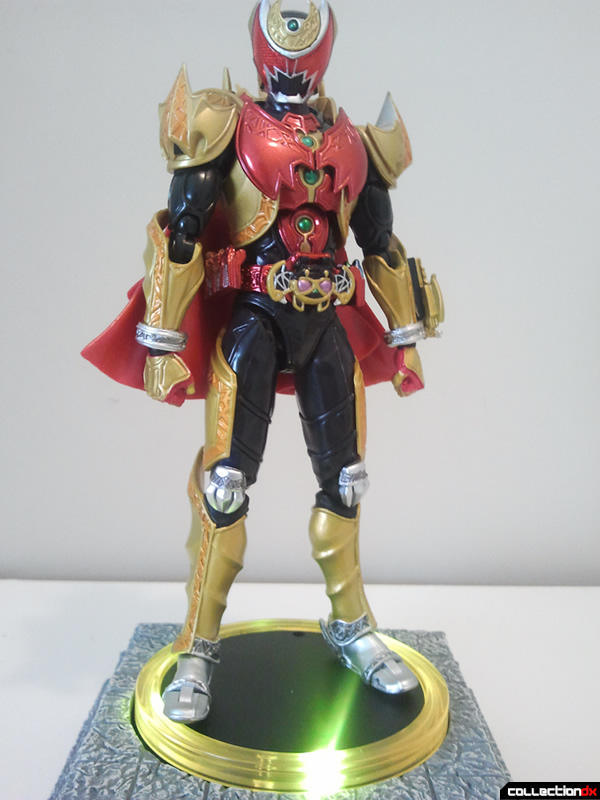 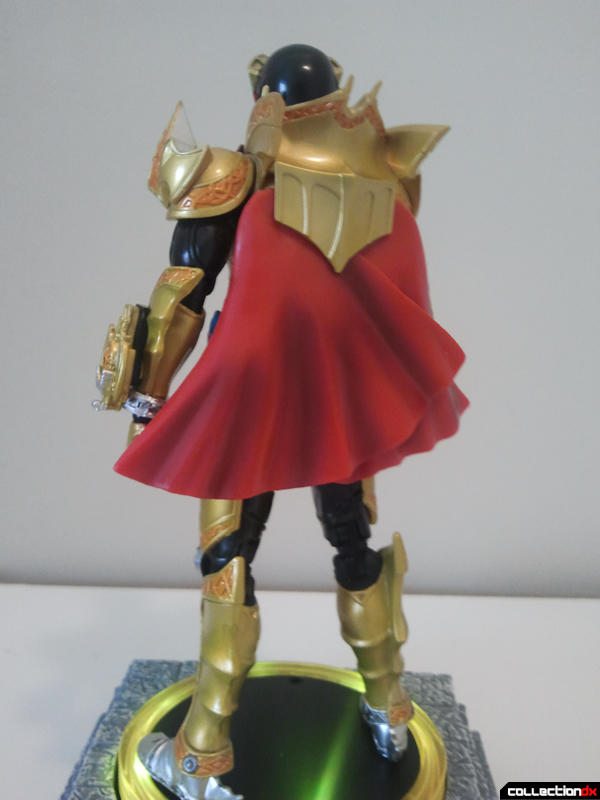 Emperor form has loads of excellent detail in both sculpt and paint. All of the extra armor has additional rune like etchings everywhere on the armor. His belt as well is very well done, with Kivat III painted very nicely, and even all of his fuestles have been painted as well. Tatsulot, the bracer on his left arm is present and well detailed. 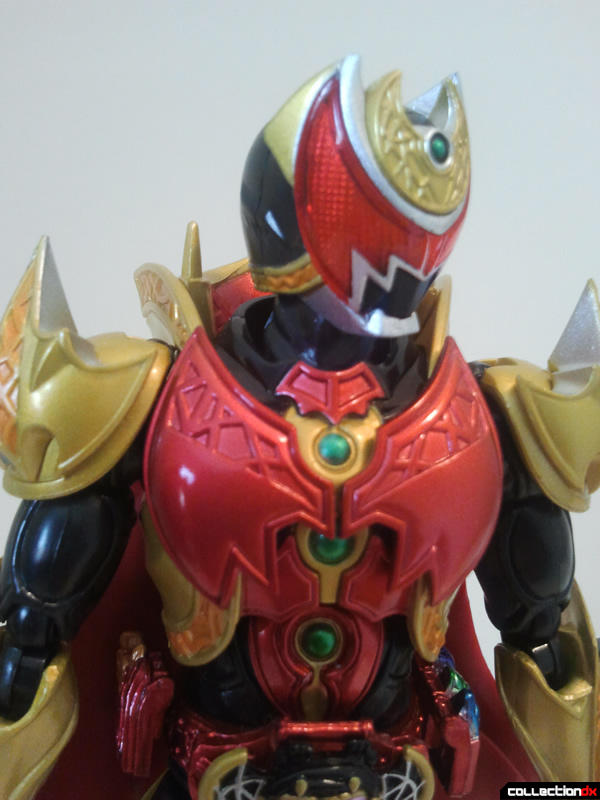 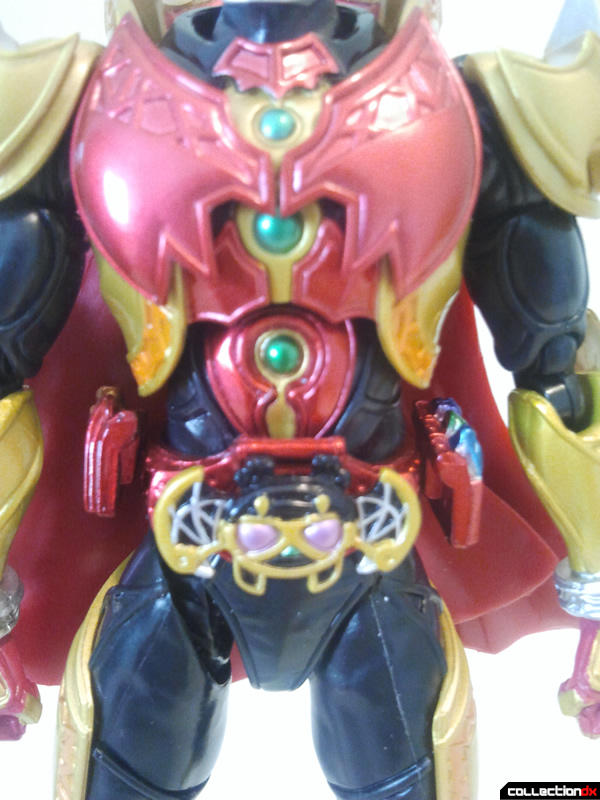 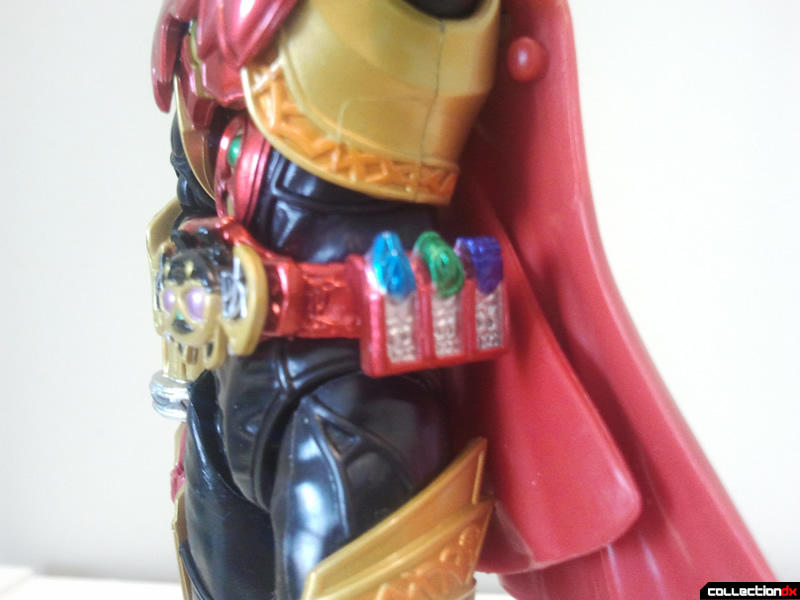 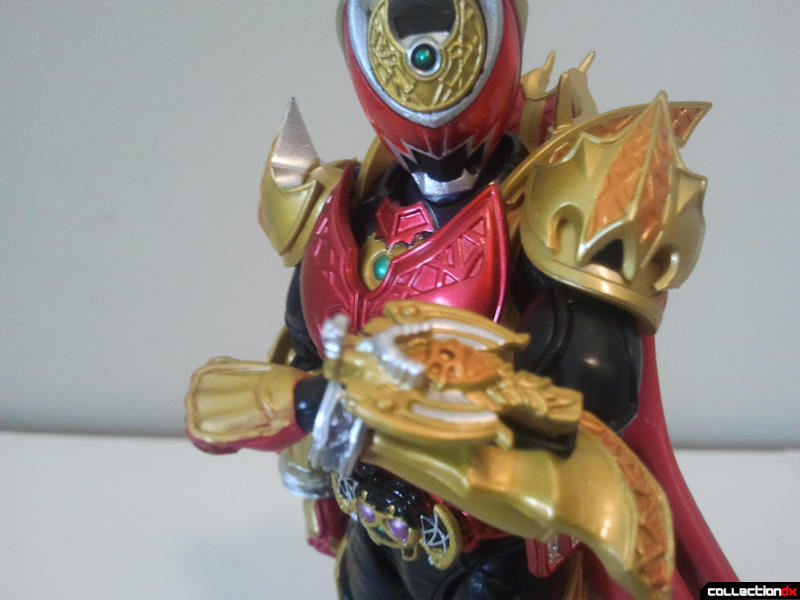 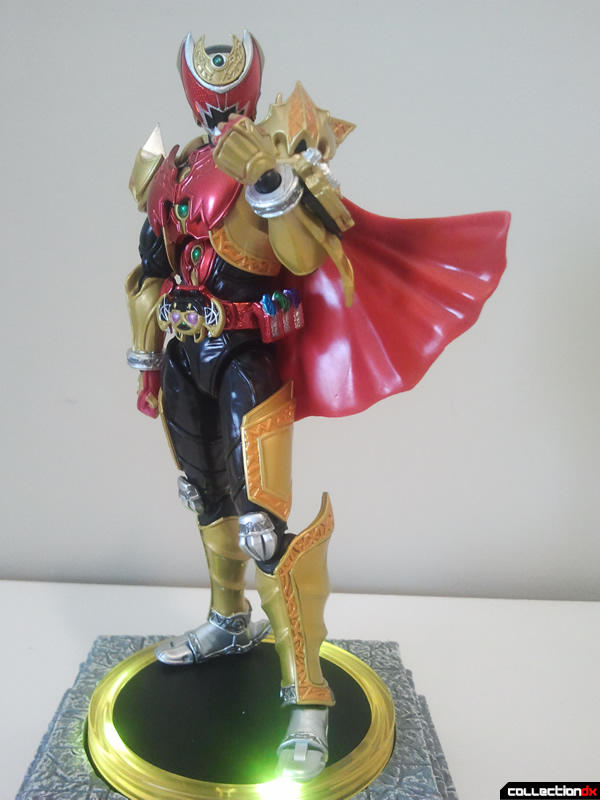 Emperor's cape is separated into two pieces and swivel on the back to extend in and out. The cape has some additional shading details to help make it stand out as more than just two bits of red plastic. In addition, there are two extra pieces of cape that can be attached to make the cape even bigger and help Kiva pose while holding his cape. 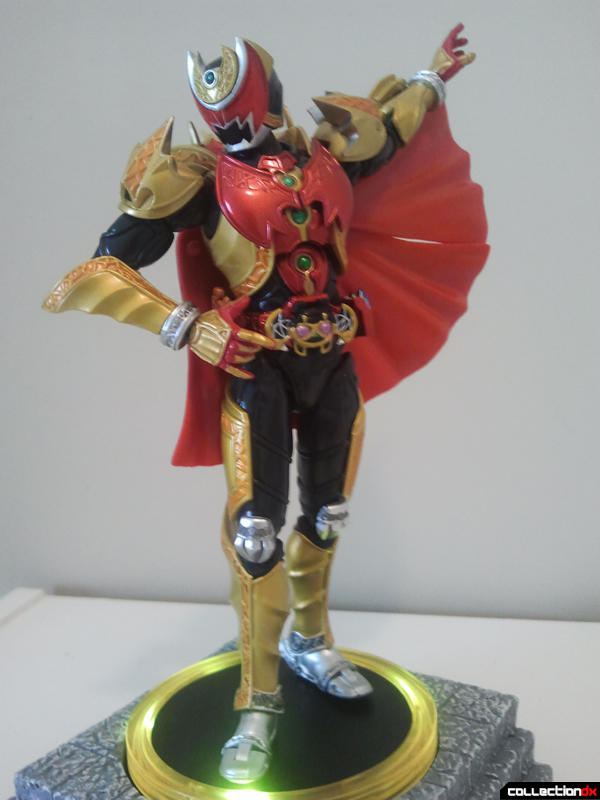 Emperor has quite a solid number of accessories. With three pairs of hands, a sword and cape parts, this Figuart has all the parts it needs and does not feel like it's missing anything. There are splayed hands, gripping hands, and Kiva's signature Kung Fu-rocker hands. 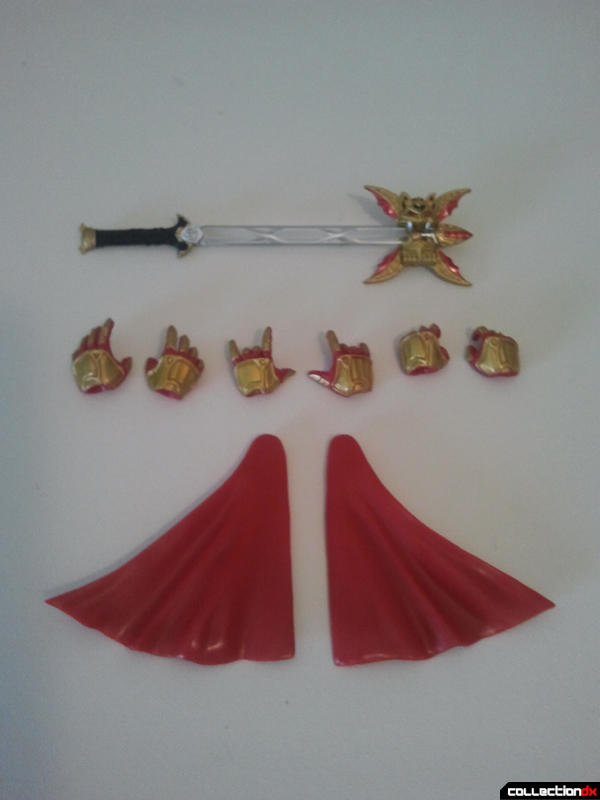 The Zanvat sword is painted clear plastic, and extremely well detail. The sharpening stone is able to freely move up and down the blade, as Kiva Emperor cocks his sword like a shotgun. 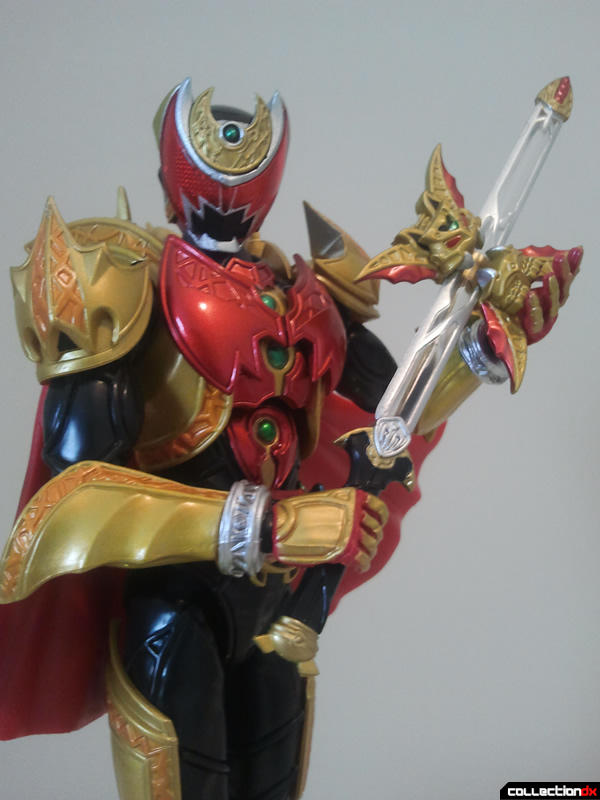 Unfortunately because of the cape, Kamen Rider Kiva is kind of difficult to pose using a Tamashii Stage or similar bases. However, his legs are thick enough that the clips can wrap around them instead. It just requires a bit of fidgeting. 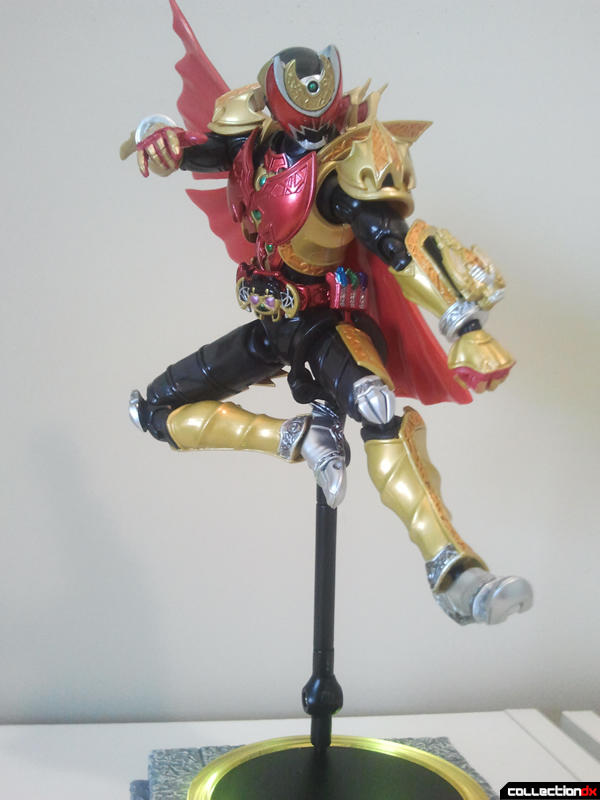 Almost everything about Kive Emperor form is very solid, except for one major exception: the feet. S.H. Figuarts usually have die-cast feet with double-joined ankles for a wide range of motion and stability. For Kiva however, the feet are plastic, and they are also only ball jointed. Although the ball joint by itself does not bother me, the lack of die-cast makes it seem like making this figure hold a pose much more difficult, and it is definitely a major weakness of this toy. 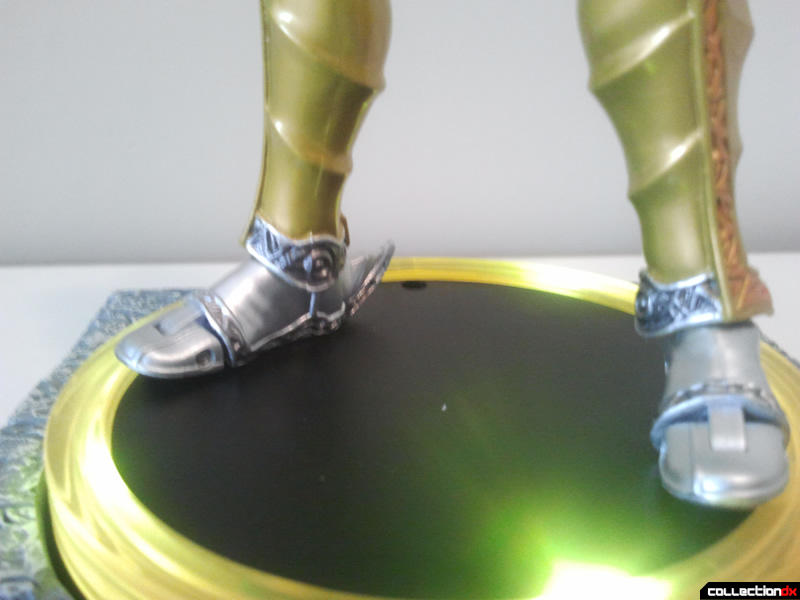 Emperor Form is an absolutely gorgeous sculpt, and is a fantastic looking toy. However, the lack of die-cast feet and having only ball-jointed feet really weakens the toy compared to other S.H. Figuarts. If you love this design, you will love this toy. However if you do not like this design, the weak feet of this Figuart may break the deal for you. 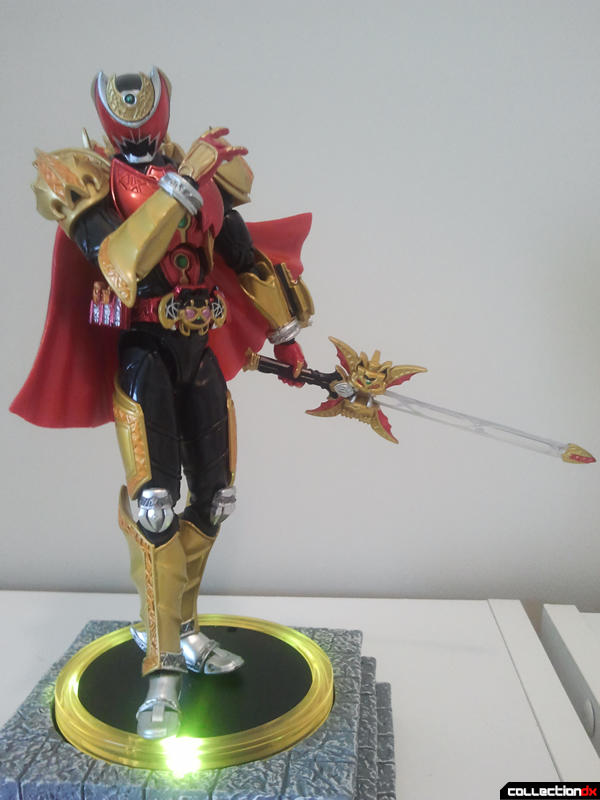 i love the fap sword