Gamera is friend to all children, but apparently not a big friend of action figures. Most renditions of Gamera are soft vinyl with limited posability. Some have moveable arms and legs at best.

The Sci-Fi Revoltech changes all that, for better or worse. I have conflicting feelings about this release. I really want to like it but it’s just so… small

This Gamera comes from the 1995 reboot entitled Gamera: Daikaijū Kuchu Kessen aka Gamera: Guardian of the Universe. Gamera comes in the typical Sci-Fi Revoltech box – classy dark design with a Velcro cover. These would look great all lined up on a bookshelf. 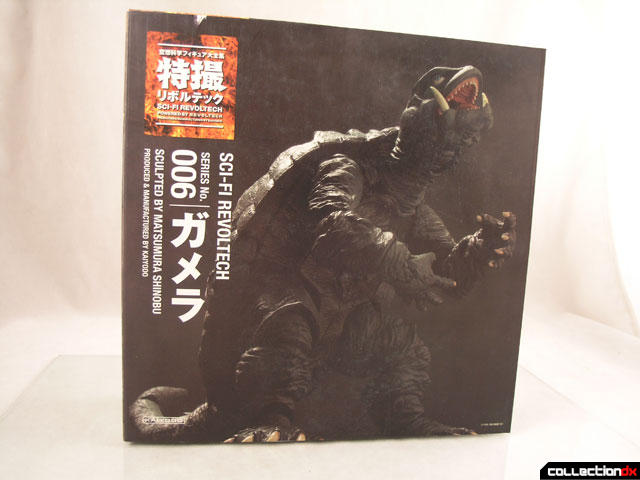 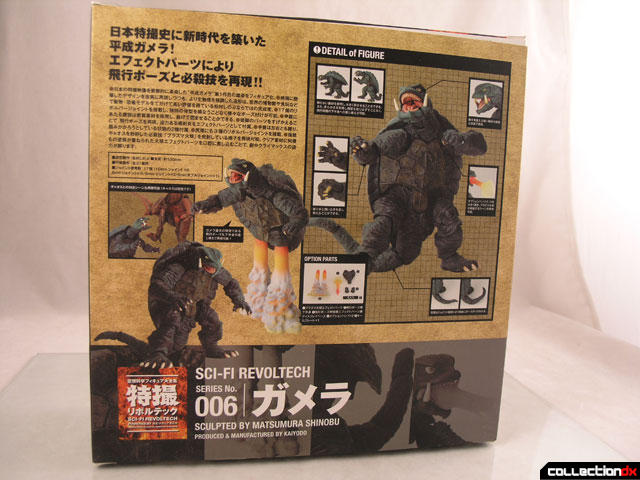 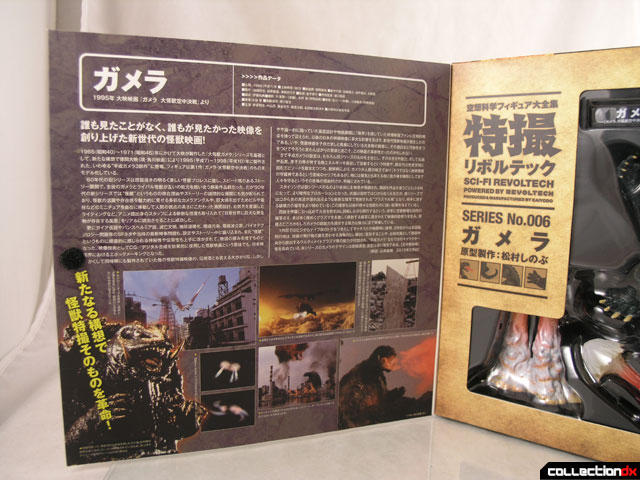 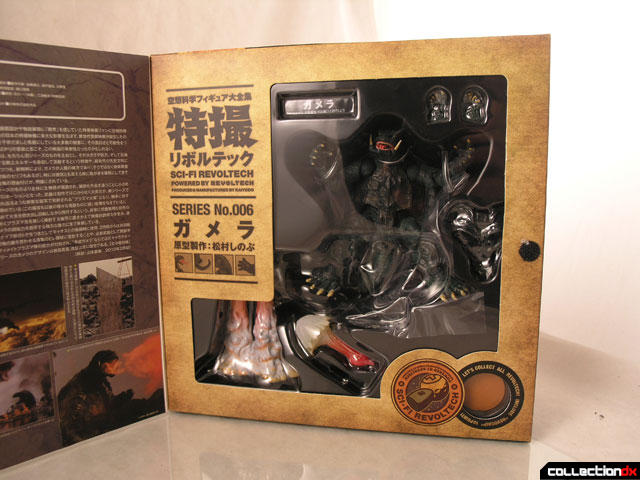 Accessories are sparse with this release. You get: 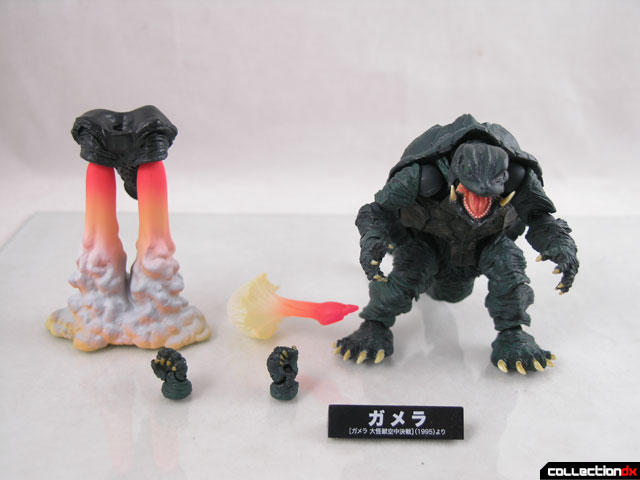 The Gamera figure is nicely sculpted, but small. The whole thing is only a few inches tall. It does have a good bulk though, largely due to the shell. 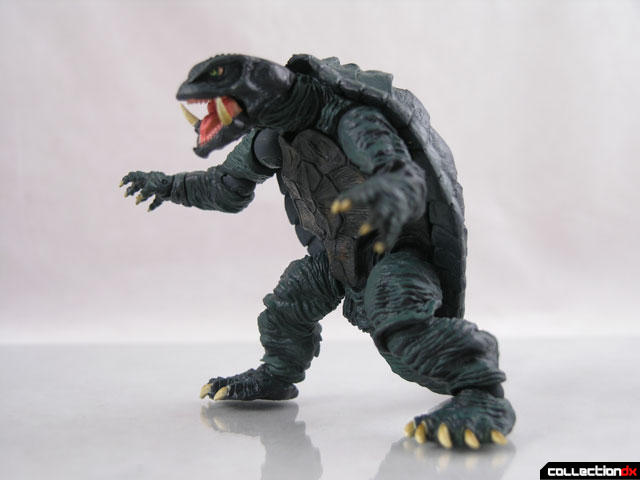 Most of the figure is the typical Revoltech ABS plastic, with the exception of the chest cover – that’s rubber. It reminds me a little of the old Teenage Mutant Ninja turtles action figures actually. The reason for the rubber is so that the figure can move around a bit better. 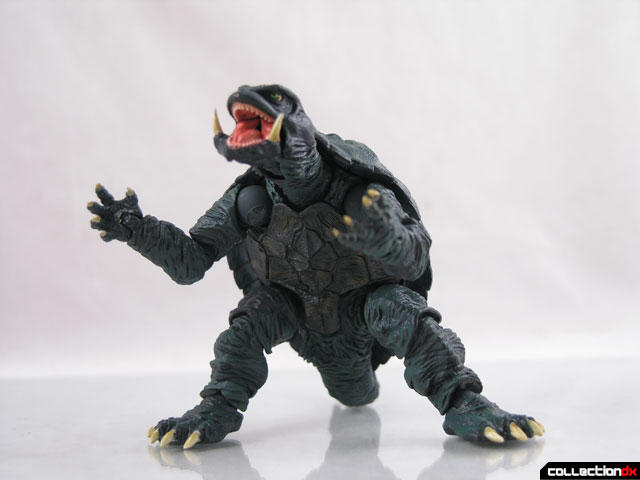 There is more articulation in this Gamera than any other Gamera toy released (except for Microman Gamera, and that sucks, so it doesn’t count). However, Gamera as a character is not known to be the most acrobatic of Kaiju, so you can only do so much with it. 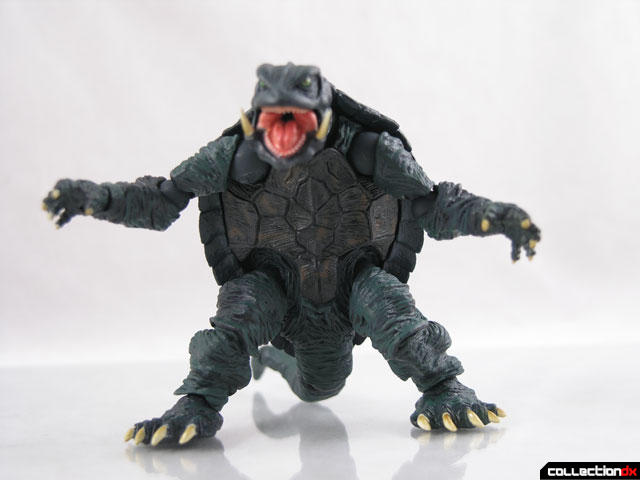 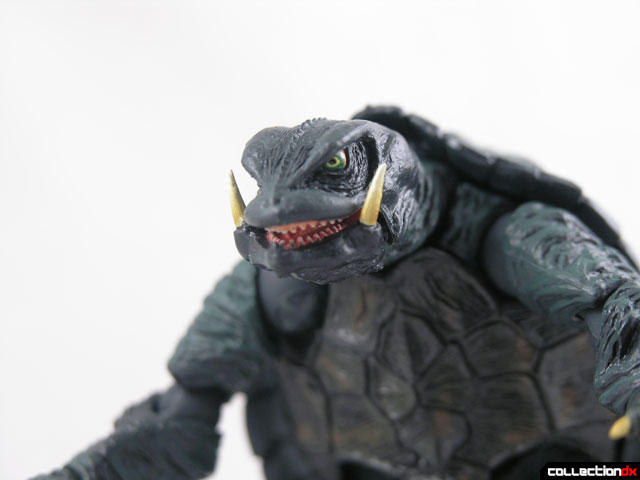 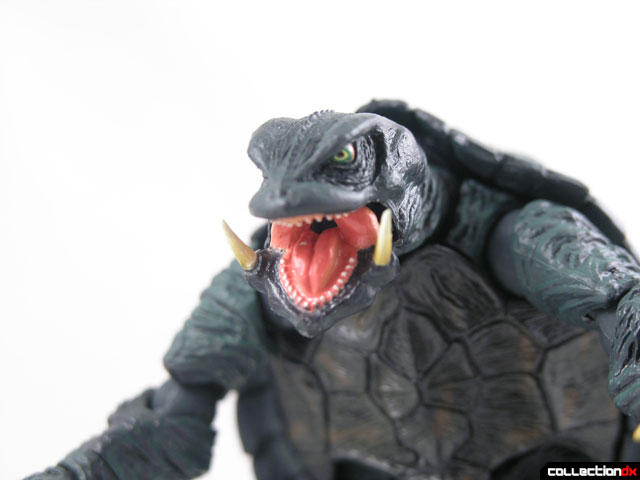 You can attach a fire blast effect in the mouth. 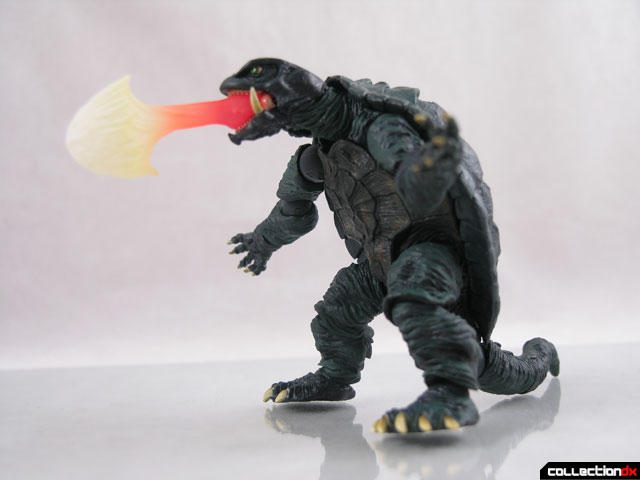 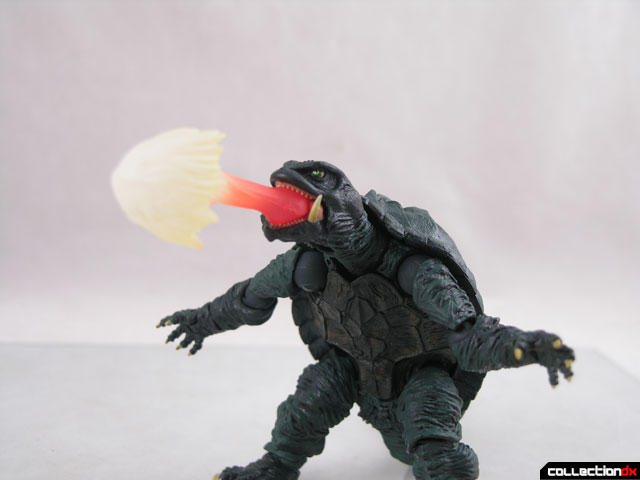 Each arm has joints on the shoulders and elbows, with swivel joints at the wrists. The figure comes packaged with open hands that can be swapped out with fists. 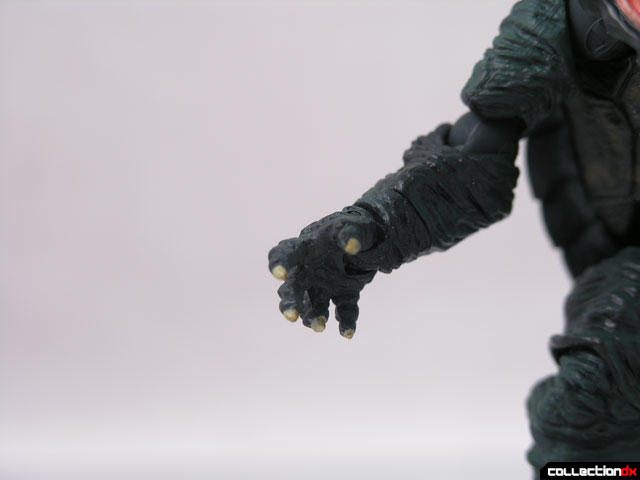 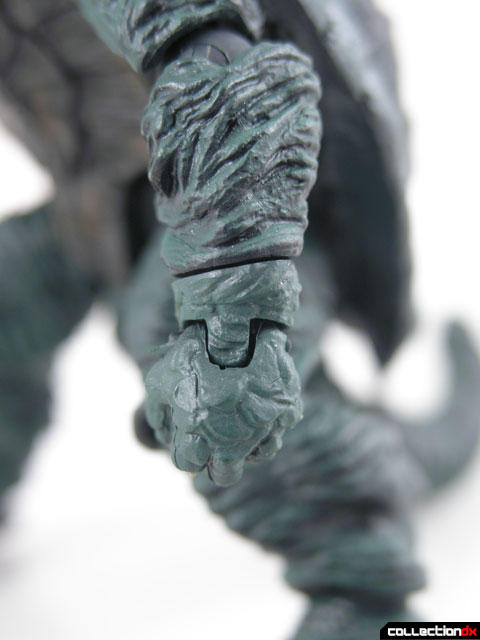 There’s a joint in the waist behind the rubber cover, but that’s mostly there to facilitate swapping with the other waist piece. Legs have Revoltech joints at the hips, knees and ankles. 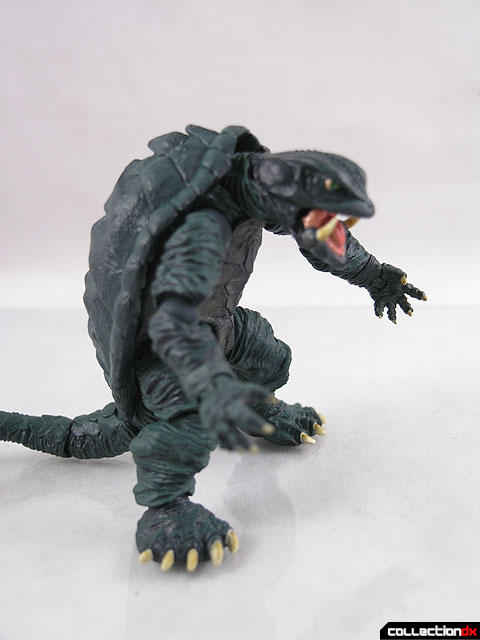 The tail is jointed in several places, but a flat part on the bottom denotes how it’s supposed to lie. 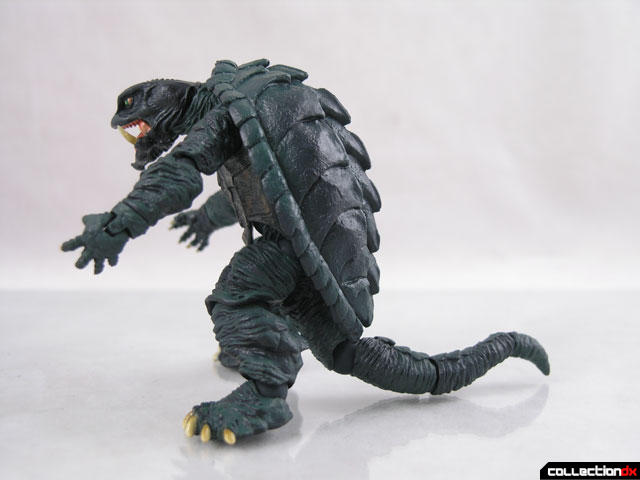 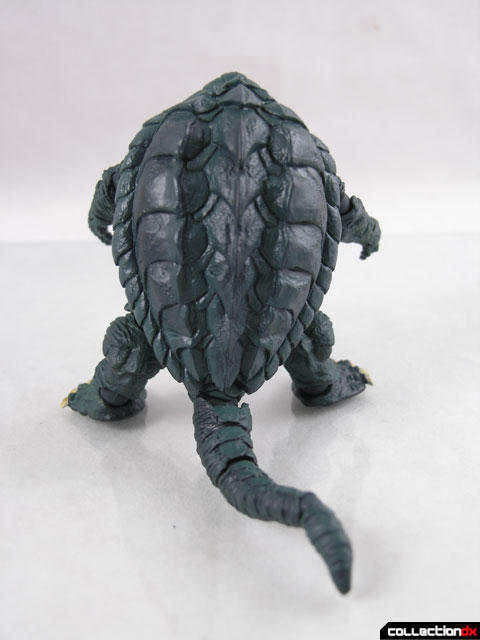 To enable the launching effect, you need to remove the waist and legs from the figure. Just pull the crotch area out and down and replace with the alternate part. This plugs into the Revoltech joint, and a tab fits into the back of the shell. From there you attach the rocket blast effect into the figure. It’s a nice effect, but I doubt I will display it that way. 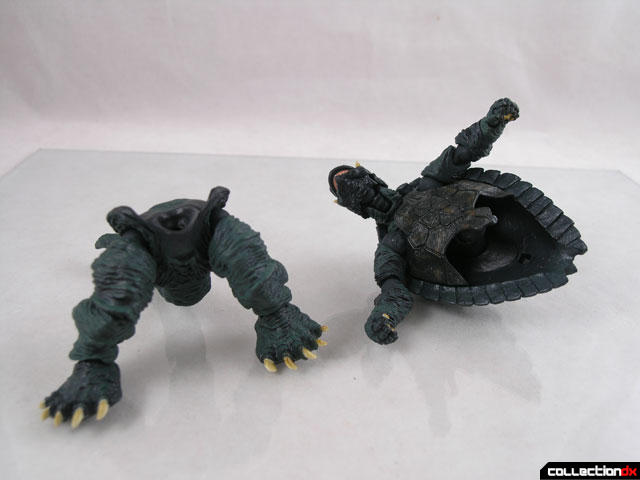 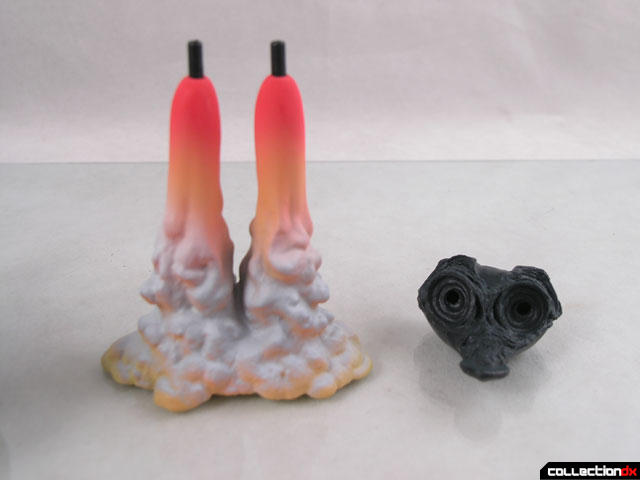 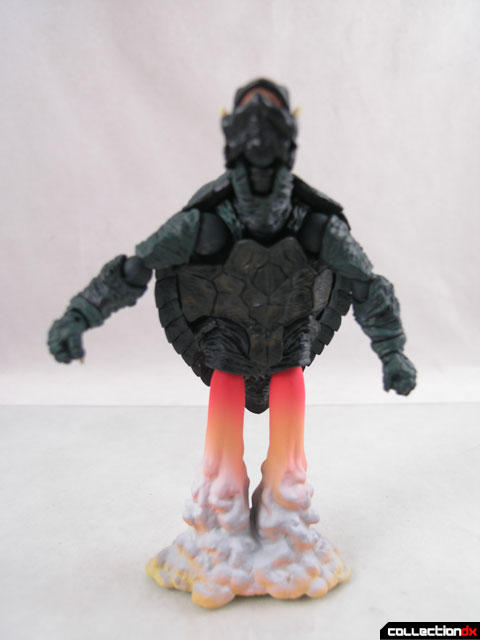 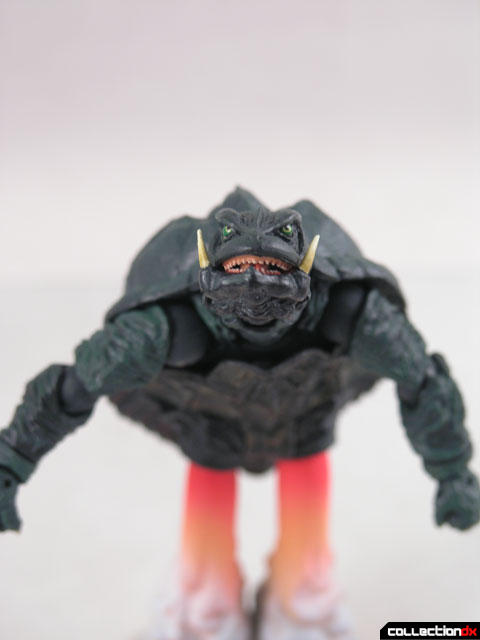 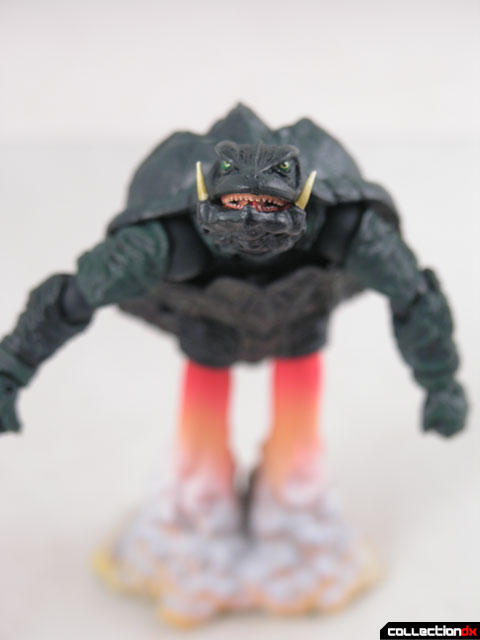 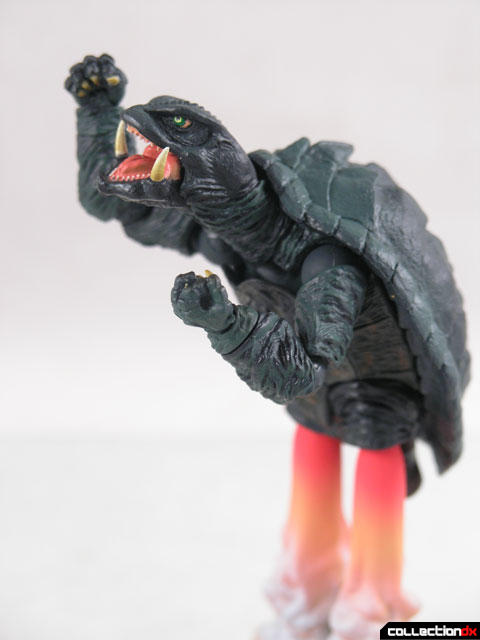 Overall it is a nice enough figure with a sharp sculpt and decent articulation, but too small for me. I like my kaiju BIG, like the imposing monsters they are. This seems like gashapon to me. 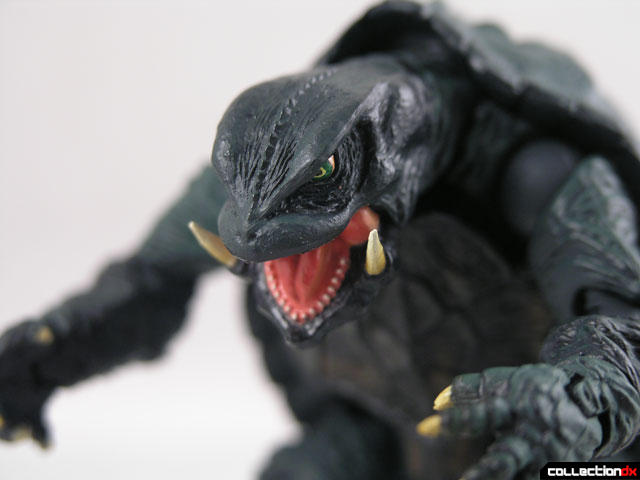 6 comments posted
How tall is Gamera?

How inches or cm tall is this figure? I like my giant monsters big too, but this may be even too small for me...

It's of a size with other Revoltech figures.

yeah but even revoltech are different heights...

It's maybe 4 inches tall? It's not big at all. I can measure tonight. Hobbysearch says its 100mm, which is about 3.9 inches.

Yeah i dont know for a fact, but average revoltech is anywhere from 5 inches to id say 6" maybe depending on which line, but im going to guess probably 5 inches.

Revoltechs vary widely in size and scale depending on the character. I had heard that all the kaiju figures are smaller than the robot figures, and this settles it...