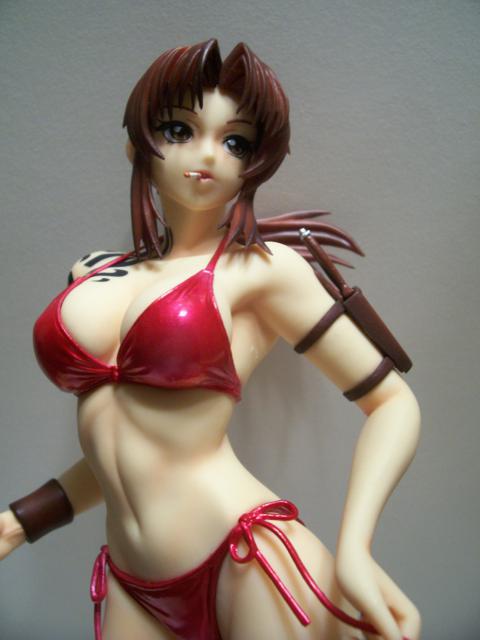 Character. Revy (Japanese shorthand for Rebecca) is a crazy gun-toting sociopath who works with the Lagoon Company, a band of mercenaries who are the main protagonists of the popular anime/manga series Black Lagoon.

Revy is every man’s dream: an insanely aggressive, impatient, amoral, ambidextrous mercenary with a natural talent for marksmanship and a death wish! Revy is easily the most charismatic member of the Lagoon company with her crazy eyes, long legs, sizeable bust and trademark double-automatics. She is often the character most frequently seen on the DVD and manga covers. I’m surprised she hasn’t been made into more girl statue merchandise. 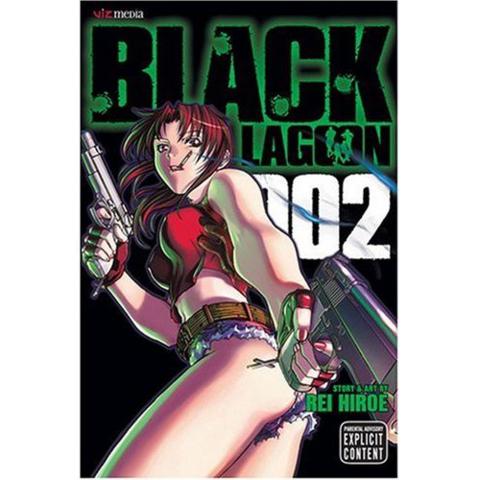 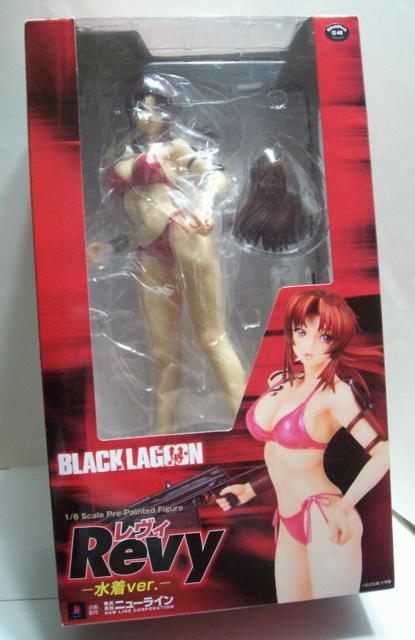 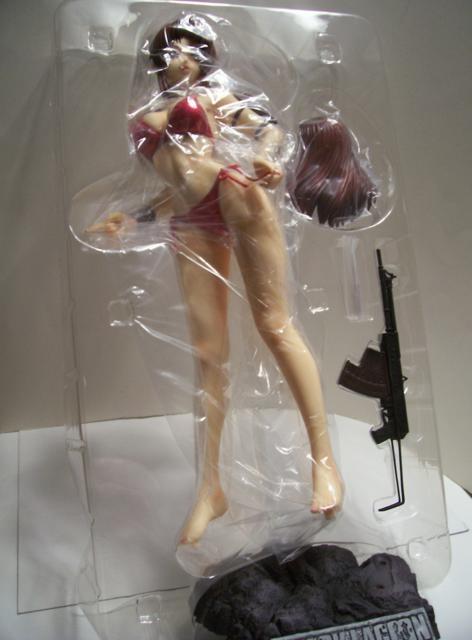 Figure is a statue with no posabillity and no cast-off. Here’s a shot of the complete front carrying the rifle. I admit, the pose isn’t anything original, but it does play to her character in the show. 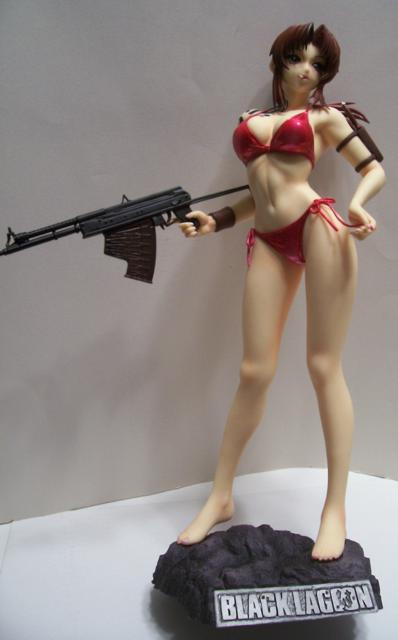 Close up on the front with many excellent details, including the cigarette in the mouth and the knife is an accessory that actually goes into the left arm sheath. Here is the knife extended from the sheath (and closed below) 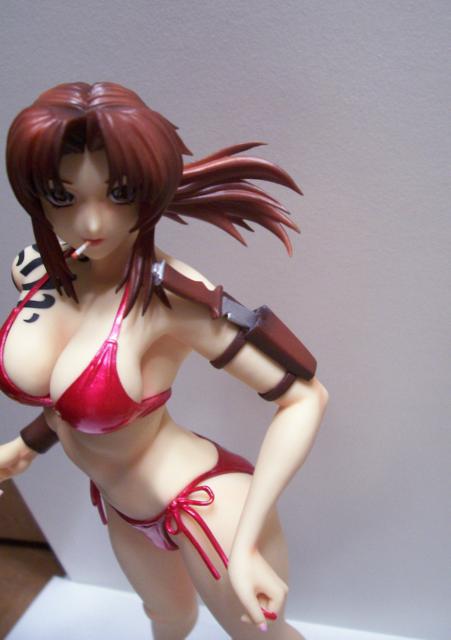 The cigarette in Revy’s mouth is a mixed blessing. It’s a nice touch, but it breaks off easily, especially the first couple of times you try to switch out the hair. 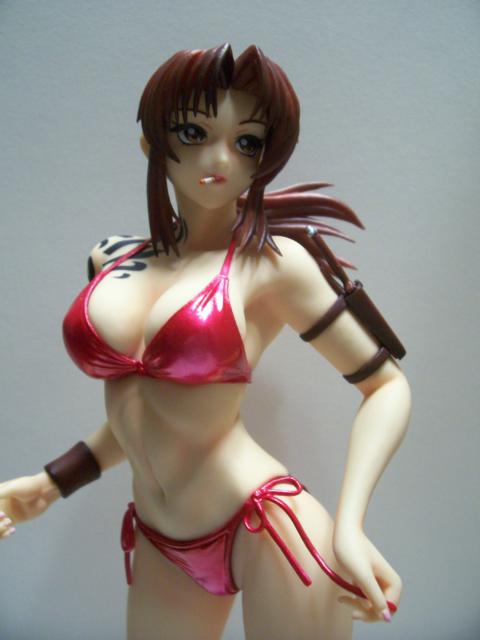 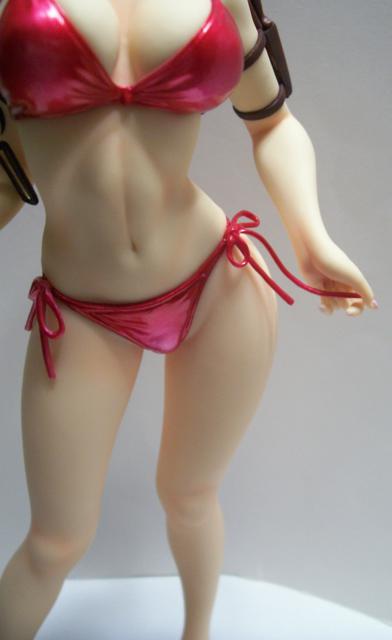 The details on the bikini are great and the pink color contrasts to what she would typically be wearing. They appear layered but are really just part of the sculpt. Sadly, there is no cast off. The bikini top and bottom are there to stay. 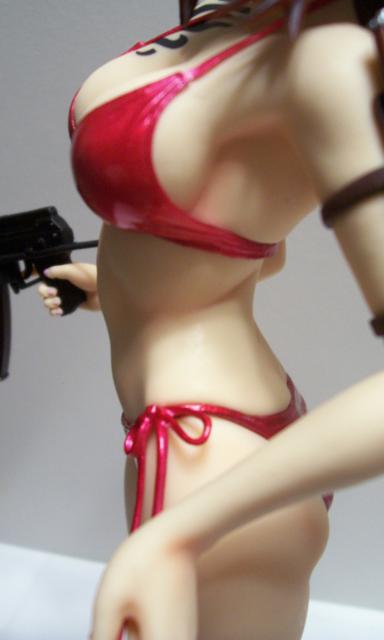 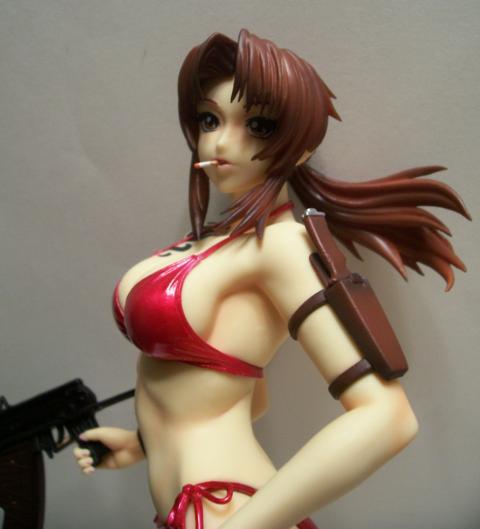 and of course, let's not forget the machine gun! 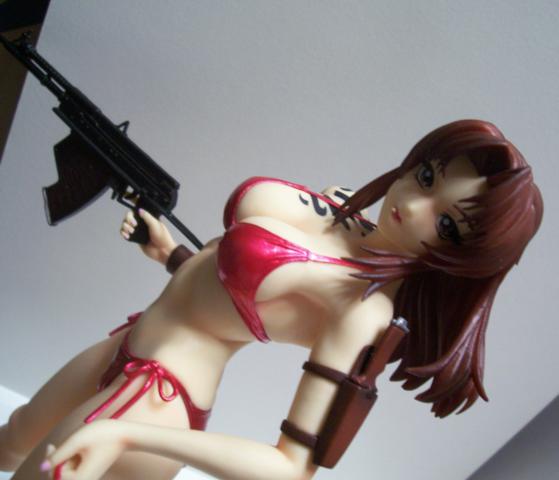 The statue's hair can be switched out to either a pony tail or full hair. Here is the head without the hair attachments. The hair switches out via pegs which can be attached quite tightly, so you want to be careful when removing, lest you damage the cigarette in Revy’s mouth. 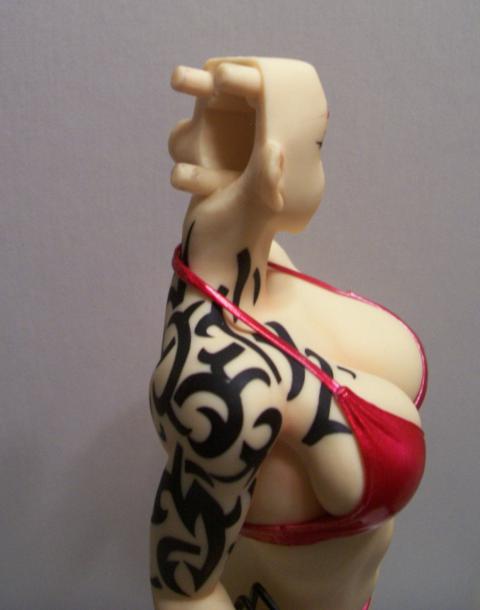 Here is the Pony Tail 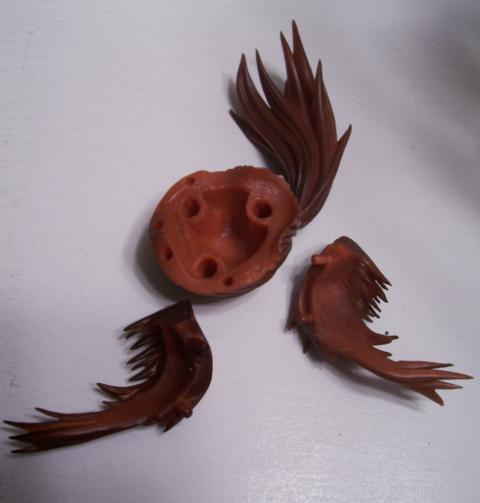 The ponytail looks good from the rear. 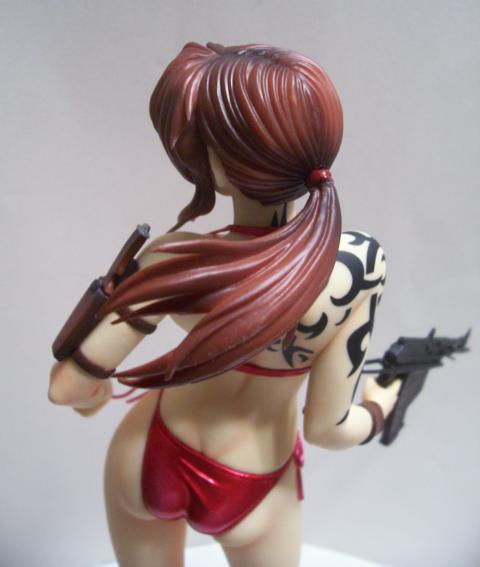 But the full hair attachment is also fetching. 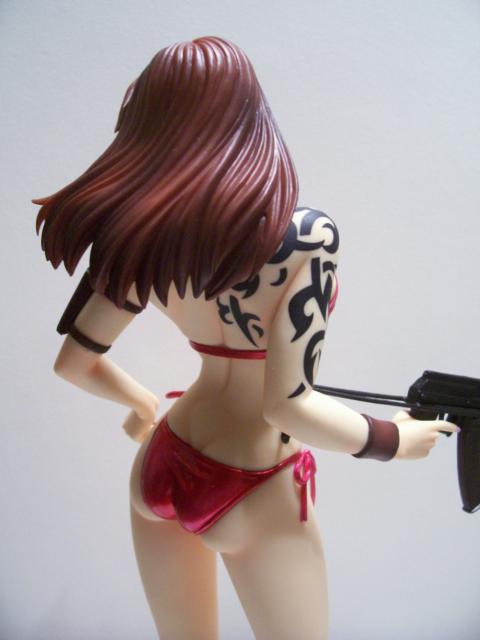 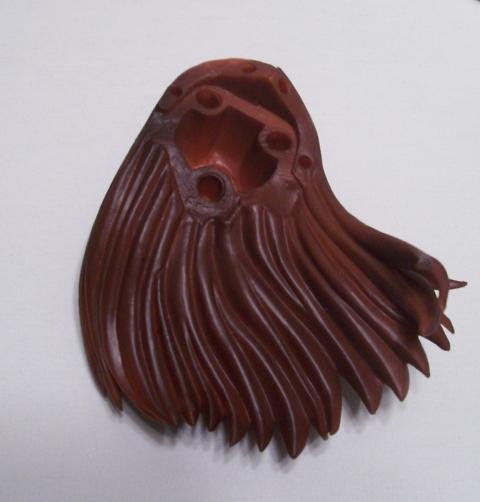 Revy looks great from the rear. 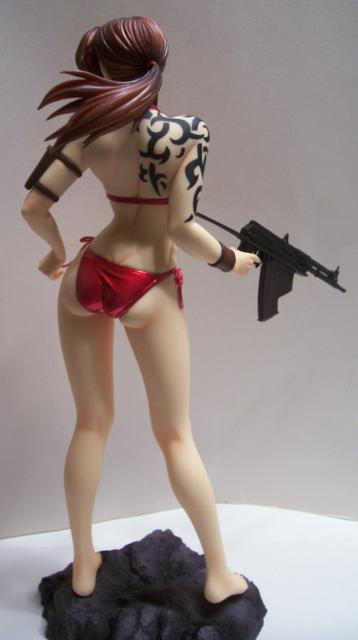 Revy’s ass is nice and captures a lot of character on her buttocks. 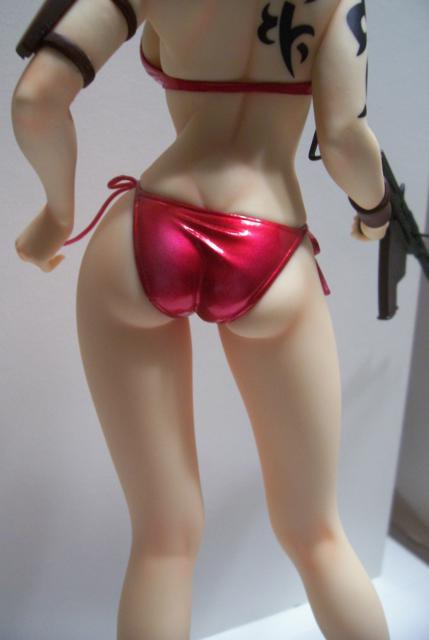 I love the tattoos, which are best appreciated from the rear, top, and side. They really are quite elaborate. Very nice for a mass produced statue. 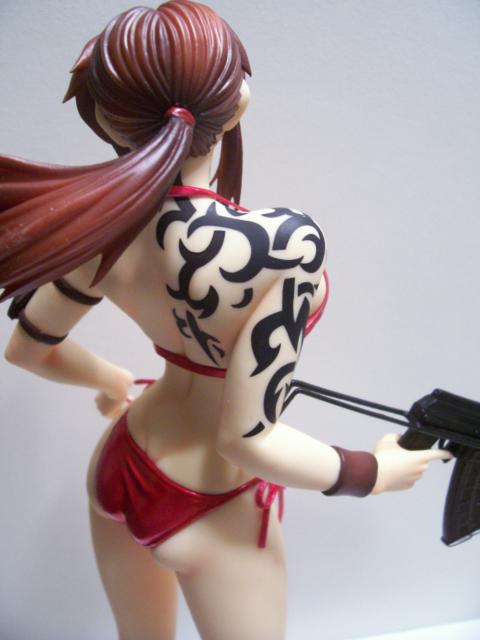 A detail that I like? the way that the bikini strap comes OVER the tattoos (again-bikini is not cast-off). 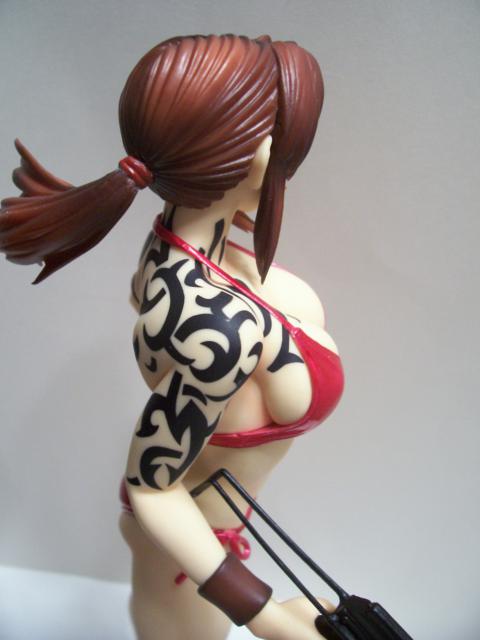 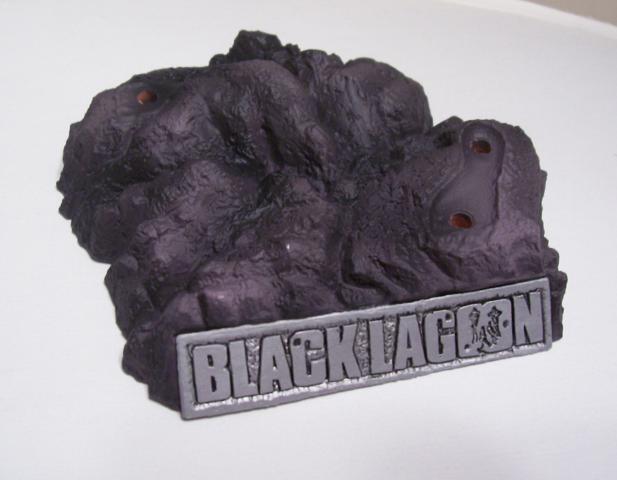 Overview. I very much liked this statue. A charismatic character, from a show that I enjoyed, with a great sculpt, showing off all the right curves, tease and guns. No serious flaws (the cigarette breaks easily-but other wise the whole thing is 100%) and with just enough adjustable gadgets (the hair switchout) to make the figure interesting.

Generally speaking-you get what you pay for here. For the 8000 yen (~$100.00 USD) price tag, Revy is an excellent statue that is worth the price tag. I'm looking forward to when they get around to making full cast-off/nude versions.