Throughout the years, Gundam has been no stranger to amoral, aristocratic adversaries and their increasingly gimmicky Mobile Suits. The first season of Mobile Suit Gundam 00 already had one fabulous villain, so the second had to pull out all the stops in creating a truly terrifying end boss. From the depths of space comes Ribbons Gundam!

Ok, so they're really passing it off as Reborns Gundam but you cannot deny that this machine was named in honor of its perfectly pompous pilot, Ribbons Almark. The Reborns Gundam represents the final boss in Gundam 00 and does so with all the gusto of a shiny new (and evil) toy. As the ultimate villain Gundam, it combines all the technologies used by both the good guys and bad guys while throwing in even more tricks. 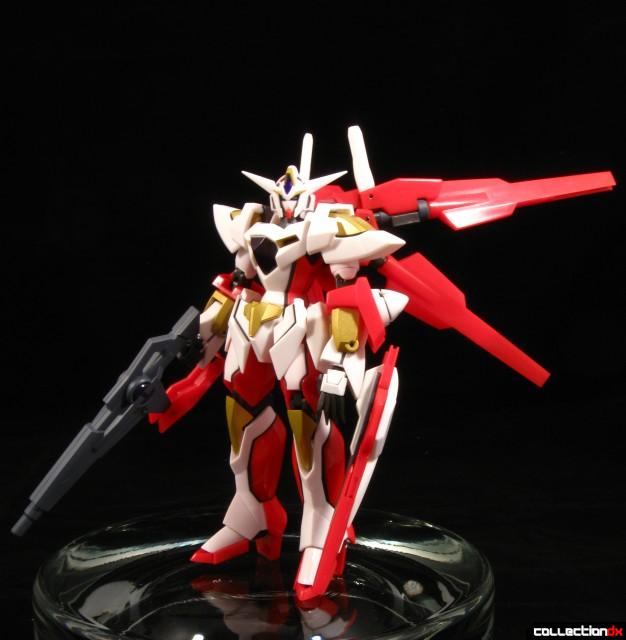 In Gundam mode, Reborns presents itself quite well with a selection of solid colors and plenty of bits sticking out of its back. 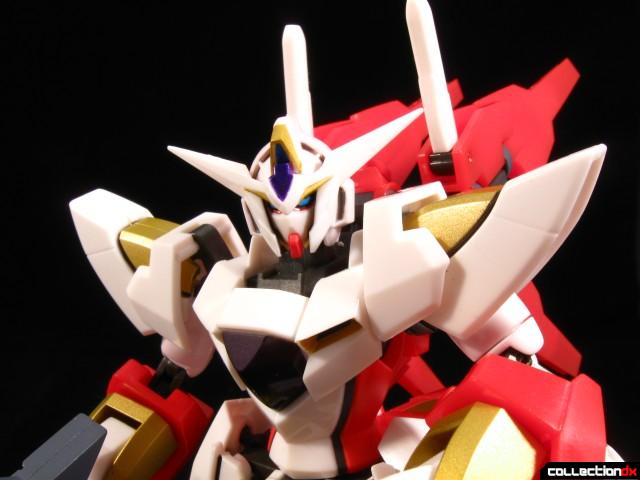 The figure is nicely detailed up close and captures the look of the animated Reborns Gundam. 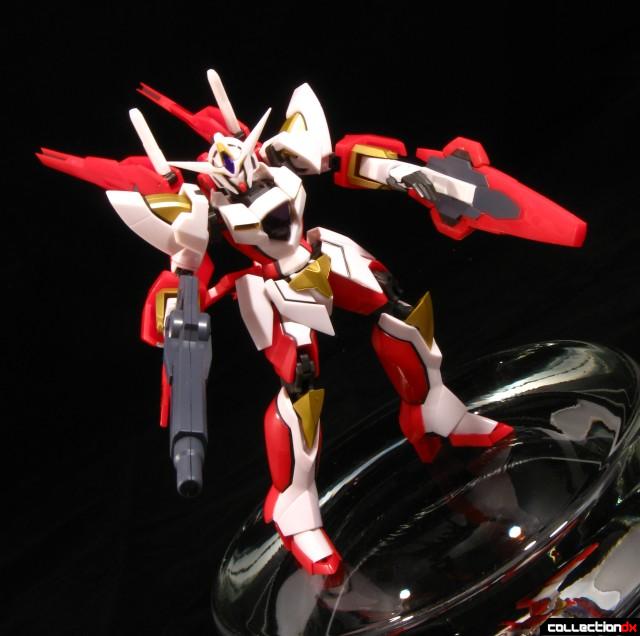 Articulation is fairly well implemented with the figure possessing a good range of motion on all of its joints. Due to the nature of its transformation, Reborns Gundam does have some oddball joints like knees that swing both ways. 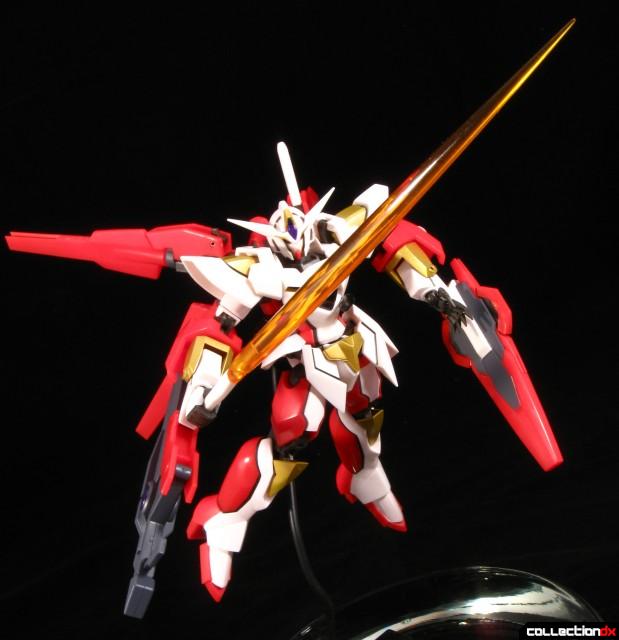 Each beam saber comes with a removable clear orange blade. 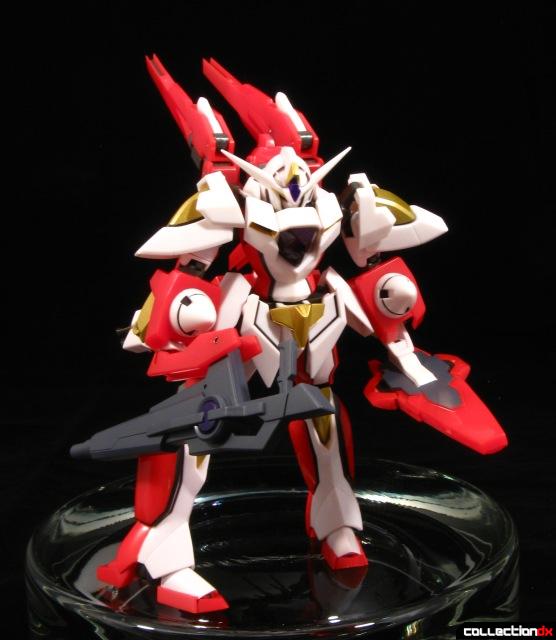 To convert the figure to Reborns Cannon mode, simply push the Gundam head down, swap the fists out for claws, bend the knees backwards, and split the calves.

And don't forget to turn it around. 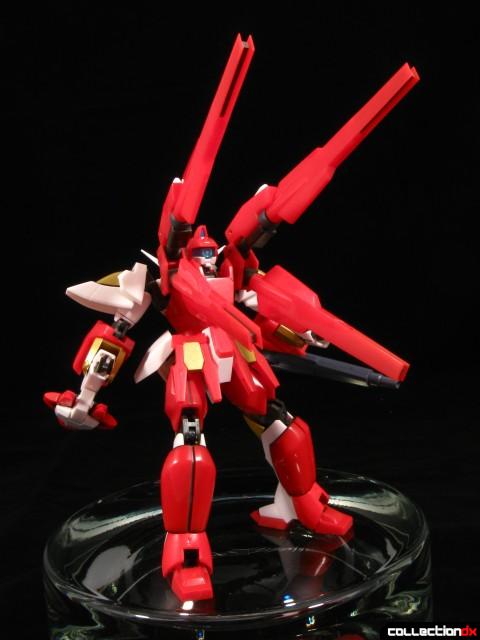 In Cannon mode, the figure resembles the original Guncannon if it were being represented by a mobile suit's backside. 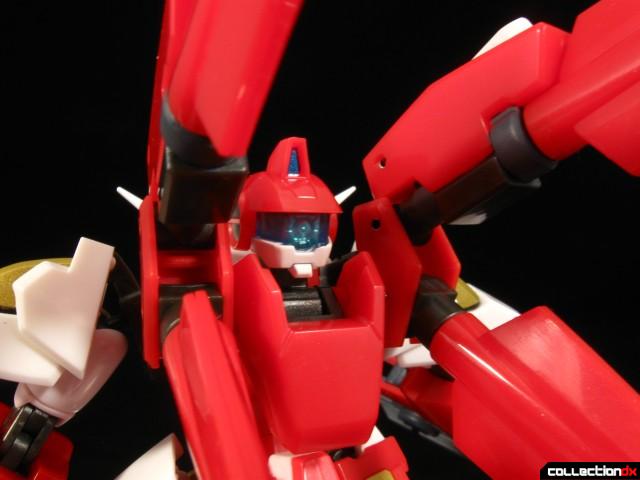 The head is ball-jointed and features molded detail under a clear visor. 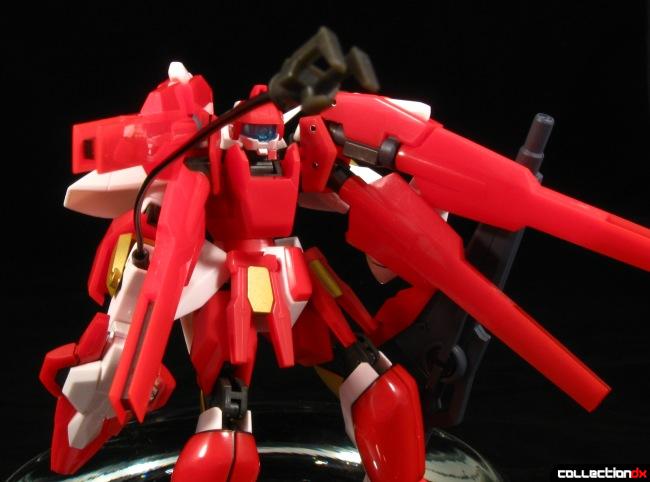 Using a pair of plastic tubes, you can represent the Cannon mode's Egner Whip. 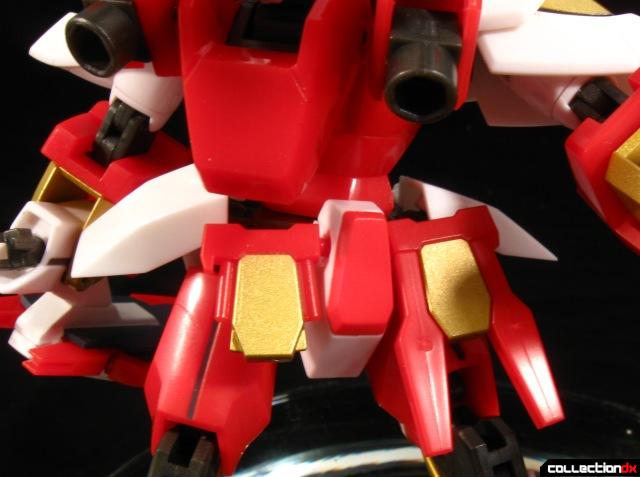 Also present are removable bits from the skirt armor. 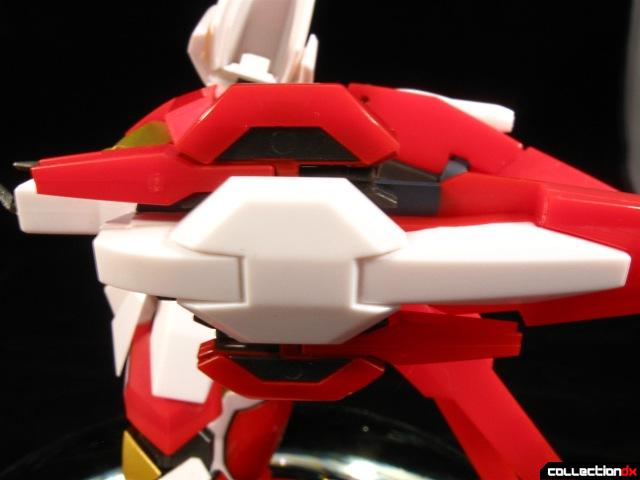 And removable bits from the shield.

Combined with the removable cannons, this figure has twelve bits of plastic that you cannot use for anything. It's the thought that counts though.

A gimmicky robot makes for a gimmicky toy. Reborns Gundam/Reborns Cannon does everything its animated counterpart did in all five minutes of screen time. The figure is fairly solid despite the transformation and presents itself well enough as sort of a more deluxe Robot Spirits release. If you like what you see then this figure won't disappoint like the second season of Gundam 00 did.

Okay, I was really on-board with this design right up until I found that there's a whole mecha sitting on its back which looks really ugly with all those fin funnels hanging off its boobs. I like many of the classic GunCannon designs, but not this one.

Say, I went through the photo gallery, but I couldn't find any pics of what the Gundam looks like from the back when NOT in Cannon mode.

Thanks for clearing that up, I was wondering what the deal with this robot was. His alternate mode is super lame though. I think the Seravee/Seraphim combo is much more interesting. Ah well, Gundam has a lot of designs each year, that must put a strain on the creators.