Eureka Seven is one of the representatives of the new mecha pantheon. Much like how Macross and Gundam represent 80's mecha, shows like Code Geass and Eureka Seven represent giant robots for the twenty-first century. And just like their forbears, modern mecha show have a star robot that catches the eye and captures the imagination. For Eureka 7, it is the Nirvash Type Zero. As the literal sine qua non for all robots (LFOs) in Eureka 7, it is no ordinary machine. It possesses a spirit far beyond a normal LFO, as it shares a bond with the mysterious girl named Eureka. 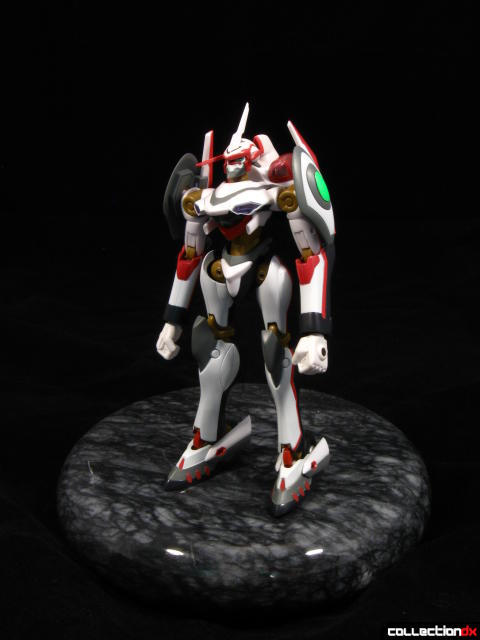 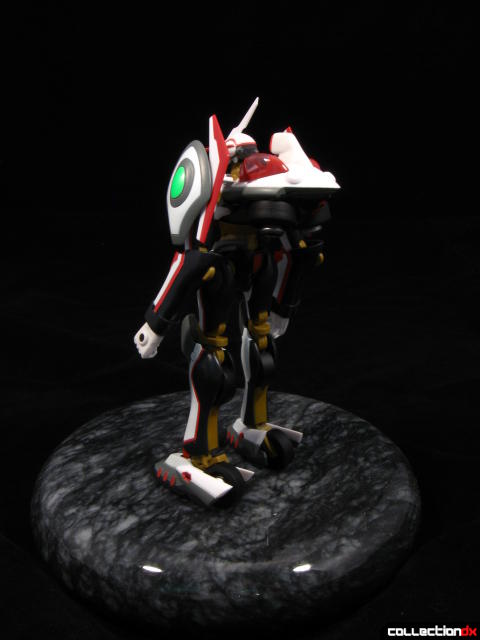 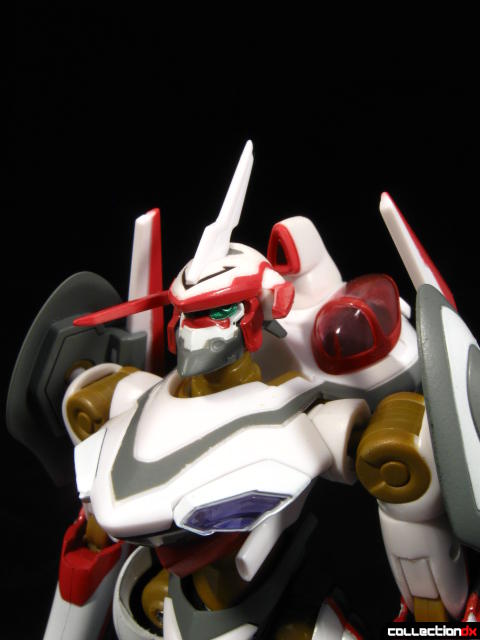 The overall form of Shoji Kawamori's original design is expertly captured in this figure. The LFO itself is a very lithe form filled with personality. With a solid body and stiff joints, this Nirvash feels great in the hands and begs to be played with. 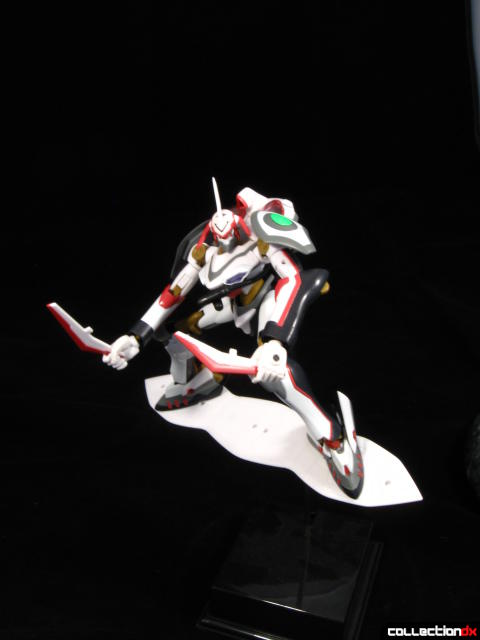 True to the series, the Nirvash has very few weapons. If comes with two boomerang knives, which can be placed on the shoulders or in a set of the appropriate hands. 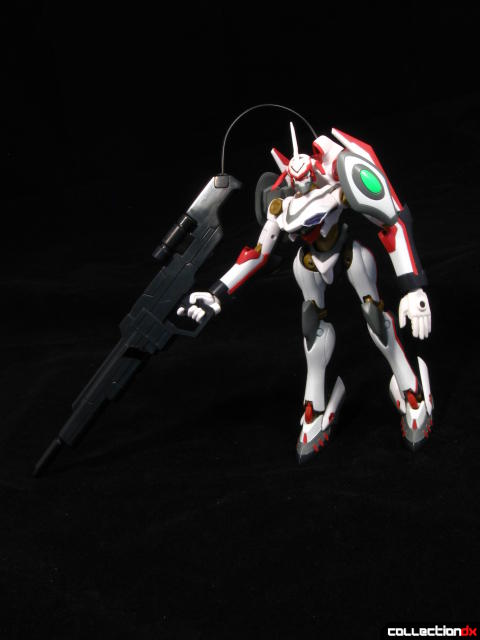 Also included is a gigantic (and very Gundam-esque) beam rifle. This character item shows up in a flashback and was probably included to justify "Military Use" Tamashii Web exclusive version. Still, it is a neat weapon and has many details like a power cable and moving fore-grip. 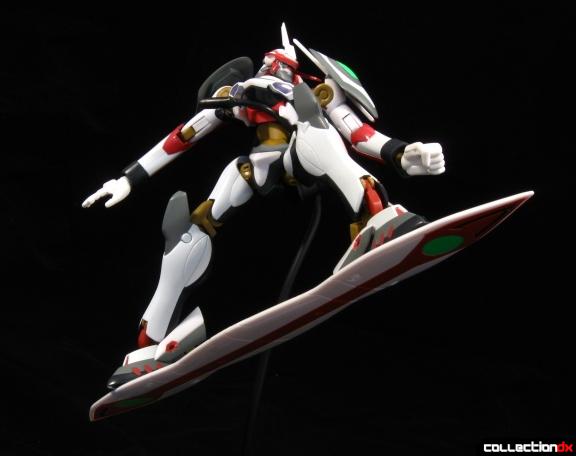 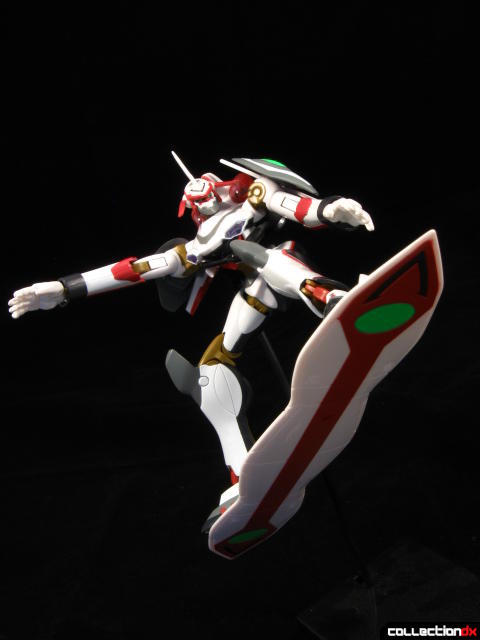 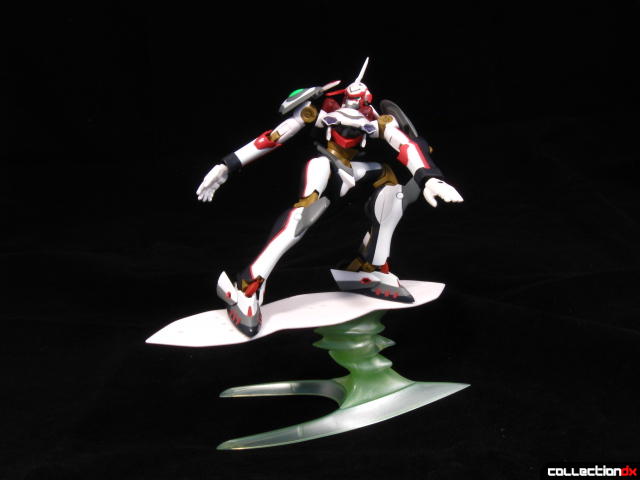 Naturally the Nirvash comes with its signature Lef Board, which is used to ride the trapar particles that permeate the world of Eureka 7. A pair of fold-out pegs help secure the Nirvash to its board, and thanks to a stylized particle wave base, the figure can hang ten on your desk without the immediate need for a Tamashii Stage.

Sadly, there is one glaring omission from this figure and that is its inability to assume the Nirvash's car mode. To some, this may be a deal breaker as the previous Robot Spirits Type Zero Spec 2 included parts to allow the toy to transform. I believe this omission was done for the sake of simplicity as the Type Zero comes with far fewer parts than the Type Zero Spec 2. While I am not too bothered by it, a part of me weeps for the ability to recreate hangar scenes where the Nirvash is being a moody car. 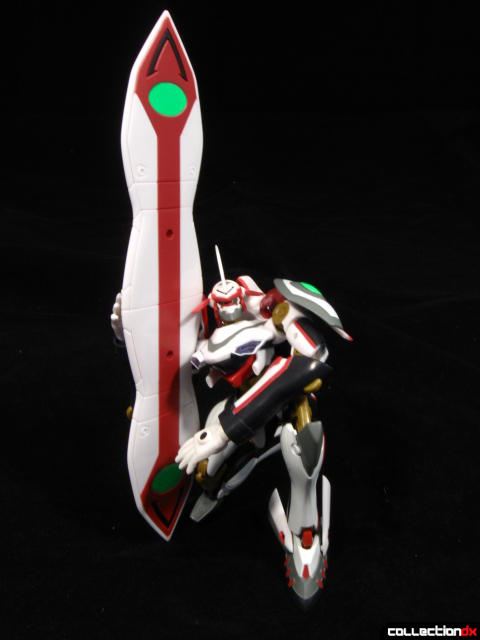 Overall, the Robot Spirits Nirvash Type Zero is an excellent, straight-forward figure. So if you're a fan of the show or simply intrigued by the design, this is a toy that's worth checking out.

Very cool Mecha. I never watched the entire series but appreciate the robot designs. What I did see of the show wasn't half bad...

The figure looks good, but its kind of bizarre that the spec2 had the transformation and for this one they left it out.

Nice photos, but you need a new upside-down marble ashtray. It loses its elegance when it doesn't really color-match the robot as much.

"Lef Board": Does it say that on the package? I wouldn't be surprised. There are SO MANY spellings of this... "ref", "riff"... I think "Lift" is probably the best translation, because, y'know, at least it means something.

"Nirvash is being a moody car." lollll

It is truly disappointing this figure doesn't do racecar mode. If the Robot Damashii Spec 2 didn't do car mode, just flight mode, it would be a different story... but this is really lame, particularly since not only the old Transmodel does it, but the new SD Infinity figure does too.

The variable gimmick wasn't the designers' idea for this toy. It's like the writer said. The toy's objectivity for this Robot Spec Type line-up is making cool, Revoltech-like poses over complex transformation. It's articulation for the sake of simplicity & not many collectors are into robots that transform that are time-consuming to them, they just want a cool robot to play with & make action poses as it's evident with the marketing appeal for Revoltech & it's competitors.

The point you are missing, as Anavel already pointed out, is that this is clearly not just a universal aspect of the Robot Damashii line. The Nirvash Spec 2 transforms to both car and jet modes, but the original Nirvash, despite being a later release, does not transform into its car mode. This is not some kind of line-wide philosophy; it is an inconsistency among the Eureka 7 releases in the Robot Damashii line.

I think I see what you're saying here. I'll get a better understanding when I read Anavel's review on this line which is right next door to Veef's.

I, for one, don't miss the transformation on the Nirvash Zero. The transformation on the SPEC2 was one of the things I hated the most (really, the only thing, since that transformation was the basis for all the downsides and issues I had with the figure as a whole) about it. It was a fiddly, partsformery, sloppy affair which involved a whole boxload of tiny bits and swappable pieces that didn't lock together in any sort of satisfying manner (not quite VF100 level annoyance, but pushing it).

I do recommend people pick up the SD Infinity Nirvash if people are looking for a nice little transformable Nirvash - it's a fantastic little robot that handles its transformation in all the ways the Robot Damashii Spec2 couldn't - elegantly and simply. It's even got some diecast in it!

I just want to add an unfortunate note about this figure. Do not leave the Lef Board attached for the Trapar Wave stand for too long or disconnecting the two will strip some paint from the board and leave an imprint from the stand on the board.